funded a service dog and a fencing installation

We meet incredible people every single week. It has become something of a guarantee working with rare medical individuals, Veterans, first responders, and military families. We listen to their stories and we sit with mouths agape as they tell us of their grit, bravery, strength, and heartache. And then, we share those stories with you.

Last week was no different. We got on a call with Eric and Carrie and prepared to hear more about his 25 years of service in the military, about the moments that shaped his life before, during, and after. Minutes later, we sat with chills running up and down our arms, tears threatening to spill over and run down our faces, jaws dropped and eyes wide, listening to a story that took our legs out from under us. That conversation was special. 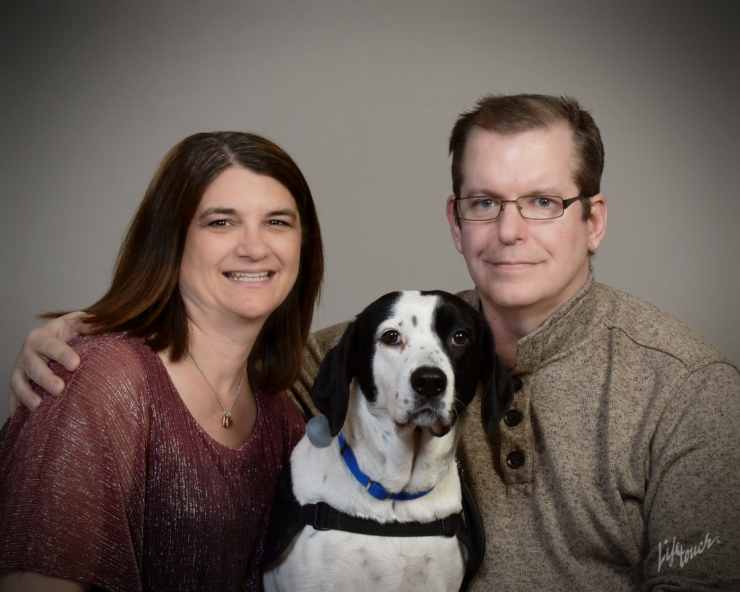 But when we read Eric’s story, written in his own words, we immediately knew we needed to share it with you in its entirety - unaltered or edited in any way. Just the truth of his experience in black and white. The grit, bravery, strength, and heartache. Thank you for sharing your story with us, Eric and Carrie. Thank you for your service to our country. Thank you for these words:

September 11, 2001. Those of us who are old enough to remember that day knew that our path and our plans were forever altered and we would spend the rest of our lives discovering how. 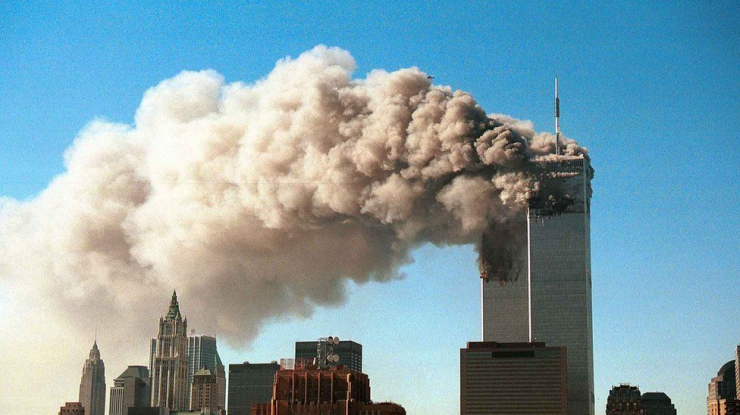 On that day, I was a healthy man in my mid-30s, happily married for 15 years and enjoying raising my three kids. We had recently signed a contract to build a new home – our “forever home” – in a small nearby community where I accepted a job as a police officer. Our kids were looking forward to finishing the school year in our current home and meeting new friends over the summer. We were close enough for my wife to continue her career nearby, as well.

I was also an Air Force reservist and had over 16 years of service. After 6 years in the Navy as a submarine sonar tech, I enlisted in the Navy Reserves, eventually switching over to the Air Force Reserves. I trained with Security Forces and was assigned to some interesting details over the years, including a couple of gigs on the local security contingent when Air Force One landed near our base. I had recently retrained for Air Force 2T2, working in transportation services. 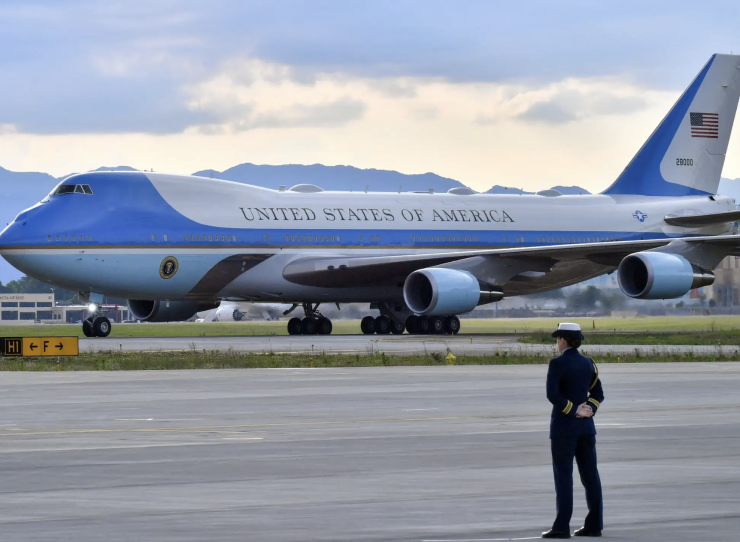 This military reserve part of my life was in a box that rarely overlapped with my civilian life. One weekend a month and 2 weeks each year could easily work into my civilian responsibilities. My family was only on base twice per year for the summer picnic and the Christmas party. The events of 9/11 quickly merged those stark divisions.

My first activation and deployment were in 2004 for 12 months. I was activated for six deployments over the next seven years serving in Afghanistan, Iraq, and several other locations. 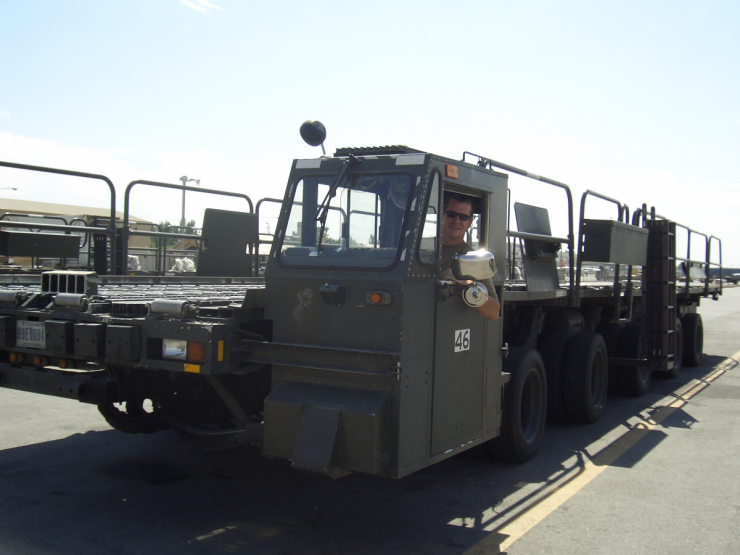 My transportation training meant a lot of loading and unloading airplanes, often in very open and vulnerable airfields. My training in Security Forces had me assigned to secondary jobs on the perimeter of the base. A lot happened during those times that contribute to both the visible and invisible injuries that impact my life today. 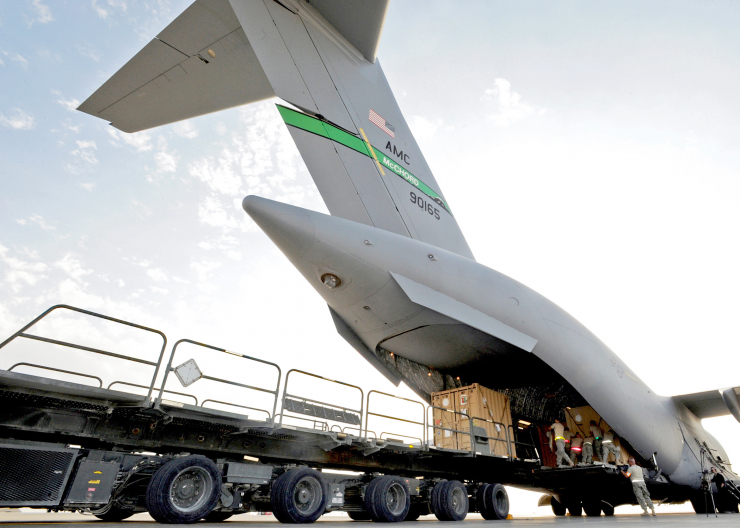 During my final deployment in 2011, I was Skyping with my family at the end of a long and strenuous shift. I heard a nearby explosion, which happened often on our base. I felt the pain in my chest and thought I had been hit. Our Skype session disconnected and the pain intensified. At that moment I realized I was having a heart attack.

My roommate was working his shift. I was alone and the base was locked down. My only chance for help was to make it to medical. The explosions continued as I partly walked/crawled to the medical building. I passed out and fell at least once before I arrived and barely whispered “help me” to the intake personnel. They stabilized me and a few days later, I was medically evacuated to Germany for surgery. Over a week later and after transfers between several military medical facilities, I returned home for recovery. 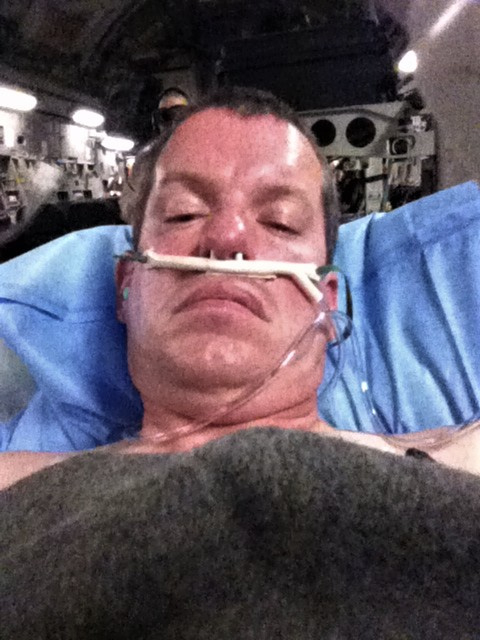 Once home, I continued cardiac therapies. While still in the military medical review process, I was diagnosed with lymphoma and began chemotherapy and radiation treatments. The early diagnosis and effective treatment put the lymphoma in remission, and left the residual impact of neuropathy in my hands and feet, and scarred my lungs. 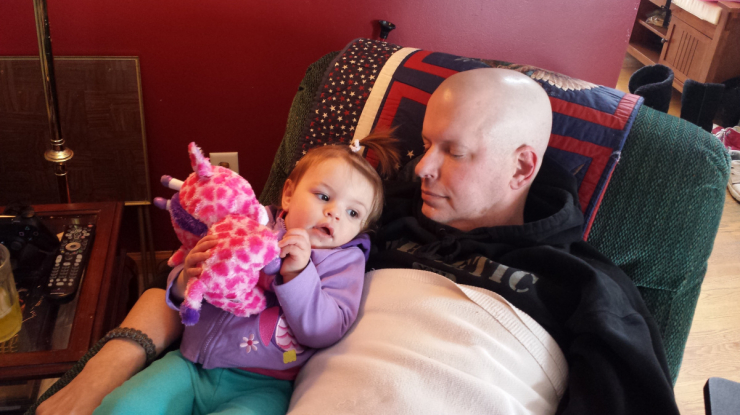 The neuropathy, along with my degenerative joint disorder, is a visible limitation that people understand. The invisible wounds are often the most debilitating, however.

I returned home the year my middle daughter graduated high school and had her senior dance recital. The next year, my son had his first prom and my oldest graduated from college. I also became a grandpa for the first time. Unfortunately, I just could not handle those events. The crush of crowds, the voices, and the unexpected noises immobilized me and I would have severe flashbacks. My wife often had to guide me out of places I normally enjoyed, like shopping centers or church. Many times, she gently steered me out of a warzone that my mind entered after a firework or other loud noise caused a flashback. I had left my police job by then and was working at the local high school. More than once, students would seek help for me when I was overwhelmed and withdrawn in the classroom. Eventually, I left that civilian job, too.

In 10 short years, I went from the mid-’30s and healthy to 45 years old, injured, and dealing with chronic health conditions that are usually reserved for old age. 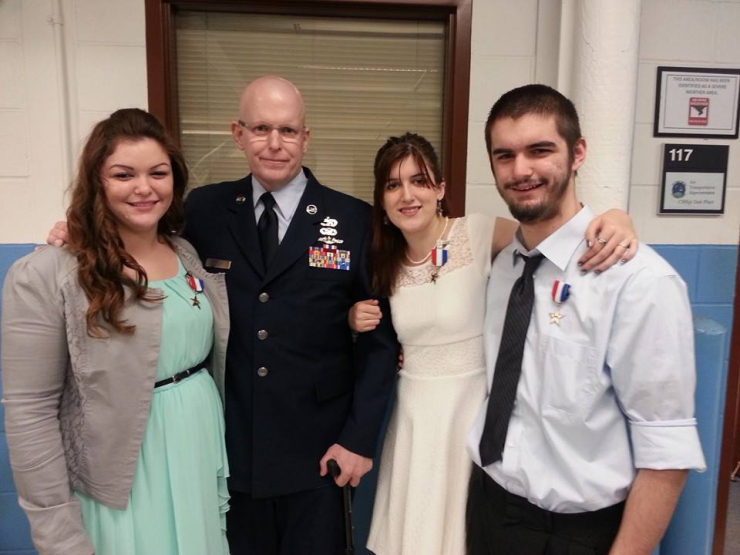 I really didn’t know how I would function normally in life. I had physical limitations due to my heart condition and cancer residuals and needed daily assistance with PTSD reactions. My wife exhausted leave benefits at her job and eventually left her career. We arranged to sell our forever home, reduce our budget in every way possible and prepare for whatever came next. It was a tough time.

Then I heard about Service Dogs for America through my Air Force Recovery Care Coordinator. I applied and was accepted as a candidate. In the summer of 2014, I met a few potential dogs and was ultimately chosen by one special mixed breed named Lola. Lola changed everything. 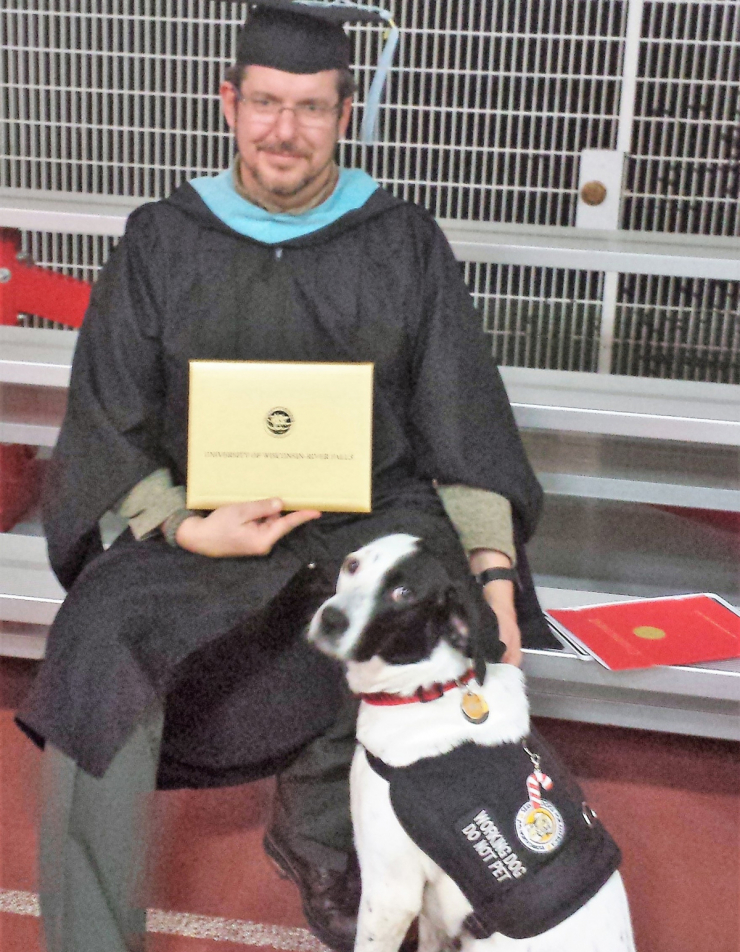 She helped me finish the college degree I had started by accompanying me to classes. She gave me the confidence to be alone because if I fell or had a medical emergency, she knew how to get help from my wife – or even a stranger if we were out and about.

She woke me from nightmares before they developed into flashbacks. She supported me through my recovery from all kinds of conditions, including surgeries. Lola helped me be present again – for myself and everyone around me.

She changed my life and made it better for our whole family by attending to my medical needs. 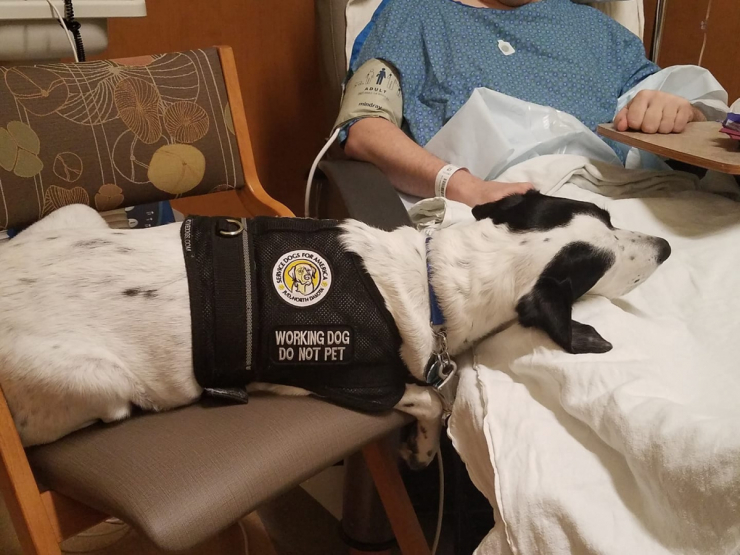 Lola made it possible for me to attend both of my daughters’ weddings. She was at the altar when I was the best man for my friend and she crossed the stage when I finished my college degree. She helped me participate in Air Force Wounded Warrior recovery events, including competition at Warrior Games, by navigating through airports and crowds at the events. My life was active and full again to the best of my abilities with her by my side for my medical assistance.

In December of 2020, Lola became suddenly ill and unable to keep food in her system. We rushed her to the vet on Christmas Eve after she collapsed and couldn’t get up on her own. Several tests and treatments later, we were able to stabilize her condition. We don’t know what caused her illness, but with medications, a prescription diet, and regular monitoring, she is maintaining her health. However, Lola’s fatigue and reduced stamina make it nearly impossible for her to effectively be of service. I knew it was time to look at other options. 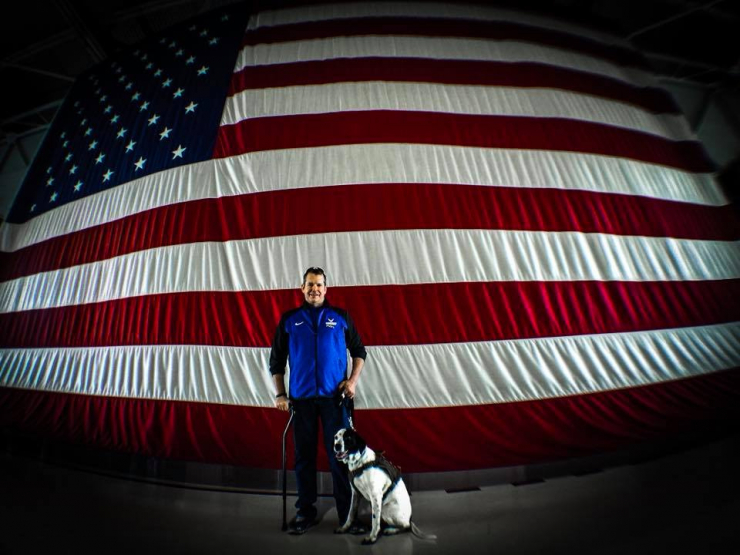 First, I tried to navigate outings without her. That was not successful and I ended up secluding myself at home often unless I had someone with me.

My physical conditions are degenerative in nature, so it also became more apparent that I needed assistance with things like dropped items and mobility. I had been in touch with Service Dogs for America about Lola’s condition and they agreed it might be time to consider her retirement and suggested I apply for a successor dog.

This spring I was approved for a successor dog and in June 2022 I met and trained with Freckles. Freckles is able to assist with everything Lola was doing for me, including medical alerts, navigating in the community, and helping with nightmares and other panic responses. She is also able to provide mobility assistance that I now require.

She has saved me from falls by retrieving dropped items that are difficult for me to bend over and pick up. She can carry small items when I need my hands free to use a cane for support. She is very intuitive and sometimes senses a need before I even realize it. 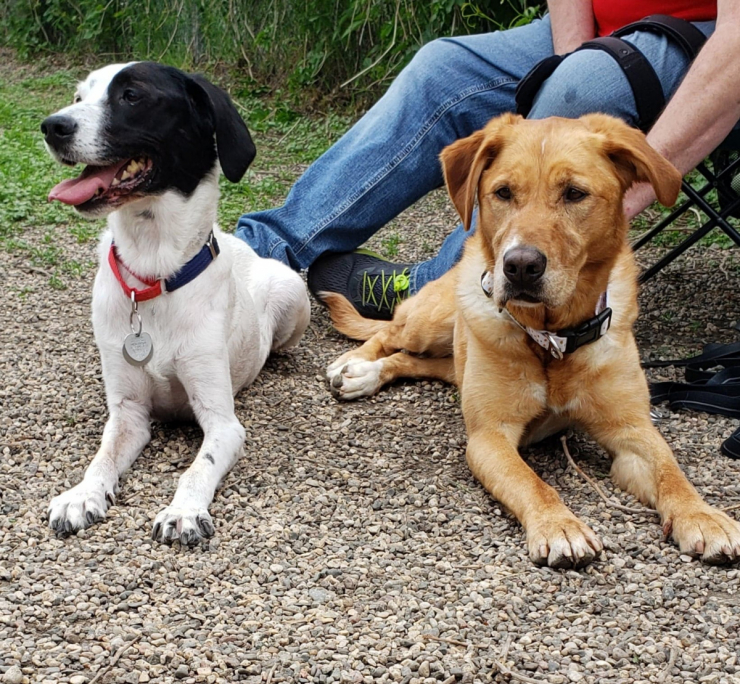 Once, I noticed that Freckles was continually licking my face, and Service Dogs for America said some dogs are trained to do that to alert for diabetes. In a follow-up medical appointment, I learned that my glucose was high. Now I know if my glucose level becomes elevated, she will be an early notification system.

My wife officially adopted Lola and is working with her to transition into a retired role. We are so grateful that the dogs get along well and that we can continue to care for Lola’s needs as well as she did for me. We look forward to including her in our family as Freckles relieves her of her work.

A grant from Chive would be so appreciated to help cover the cost of Freckle’s placement. We rely solely on my disability benefits and my wife’s early retirement benefits. While we are comfortable, we don’t have money in our budget for many extras. We exhausted most of our savings in the years after my injury before we fully downsized to a lifestyle without the two full careers we had prior to the military injury. We paid (and will continue to pay) for the cost of Lola’s medical needs from the small savings we had recently begun to establish. A grant would be life-changing for us. 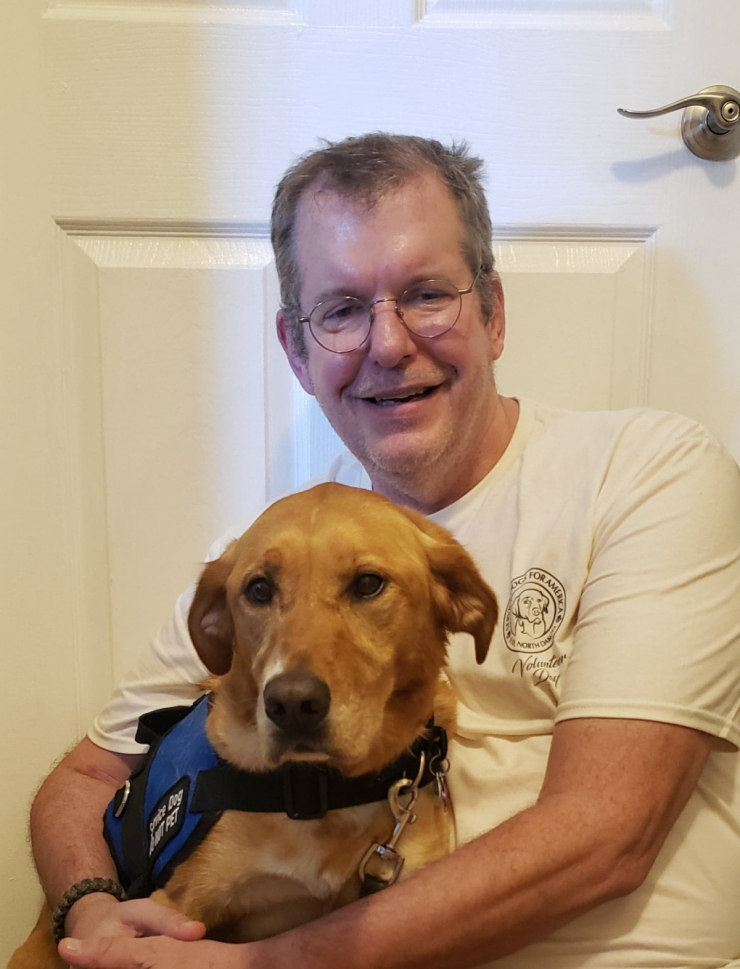 For me, a service dog is so vital for navigating life. Freckles gives me the independence to participate in the world around me. I so appreciate any possible assistance with this incredible gift.

Grit, bravery, strength, and heartache. Thank you to all of the Green Ribbon Fund donors who made this grant possible for Eric and Carrie. Your one-time and monthly donations changed another life for the better and brought Freckles to his forever home. We’re in awe of you, too. Always. Become part of our donor family and DONATE HERE.