An accessible van with hand pedals

Unless you’ve been living in a bunker, you’ve probably seen the hilarious and uplifting Unbreakable Kimmy Schmidt on Netflix. Seeing this gif was probably enough to get the theme music stuck in your head:

They alive, damn it

They alive, damn it

But females are strong as hell

For the uninitiated, some context: Kimmy Schmidt was born into a cult and forced to live in a doomsday bunker for 15 years. Once Kimmy and all the other bonnet-wearing, ankle-length-skirt-clad girls were finally freed, Kimmy went straight to NYC to begin her new life. Never letting her past define her present, she survives and thrives in the city. She’s unbreakable, and she’s alive, damn it! 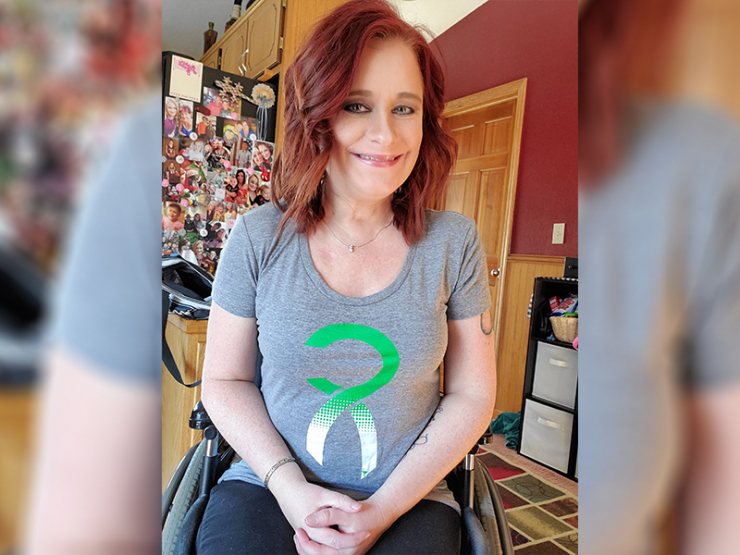 When our recipient Krissy G. described herself as “breakable” during a phone call, the intro lyrics to Kimmy Schmidt popped into my head immediately. How could our Krissy say such a thing? She’s beaten breast cancer, excelled in her career, dealt with feeling like an outsider during her school years… She’s nothing but tough.The breakability, it turns out, is physical, and accurate: Krissy was born with a rare genetic bone disease called Progressive Diaphyseal Dysplasia (PDD). 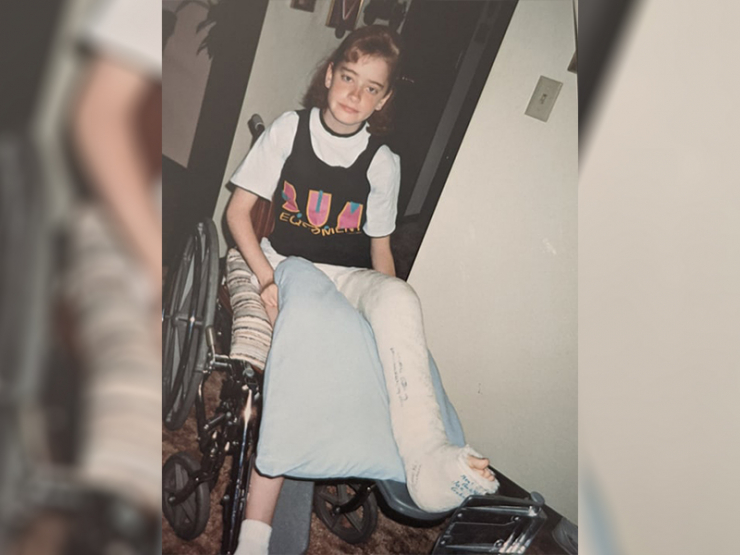 Krissy’s struggles began at 5 years of age. While playing duck duck goose (or Duck Duck Gray Duck, as they say in her home of Minnesota) she hoped she wouldn’t be tagged. Getting up and running around was getting more difficult by the day. Soon enough, any and all physical activities with classmates were ruled out, because one false move could land her in a cast. 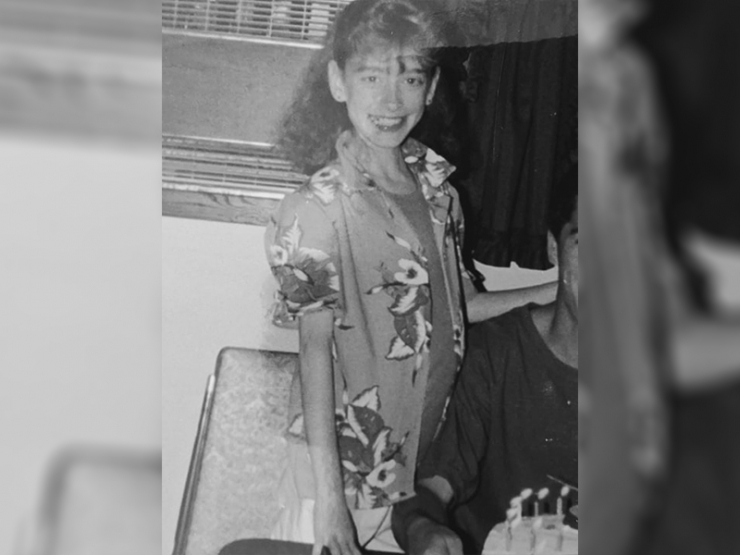 Aside from being fragile, Krissy was also tiny. PDD took away her ability to gain weight as well as her appetite. Combined with the lack of a chance to build muscle through exercise, these issues left her rail-thin --about 65 pounds-- well into adulthood. 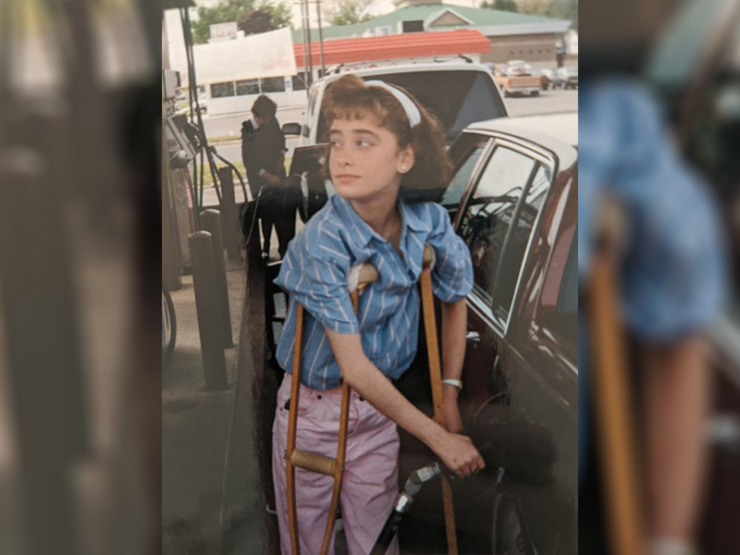 Being discluded from sports, along with her differing physical appearance, meant one thing for school-aged Krissy: she was an outsider. Some of her peers teased her and it was hard for her to form friendships during the early parts of her childhood. What some of her peers saw was a small, frail girl who walked with a waddling gait and a proclivity for crutches. 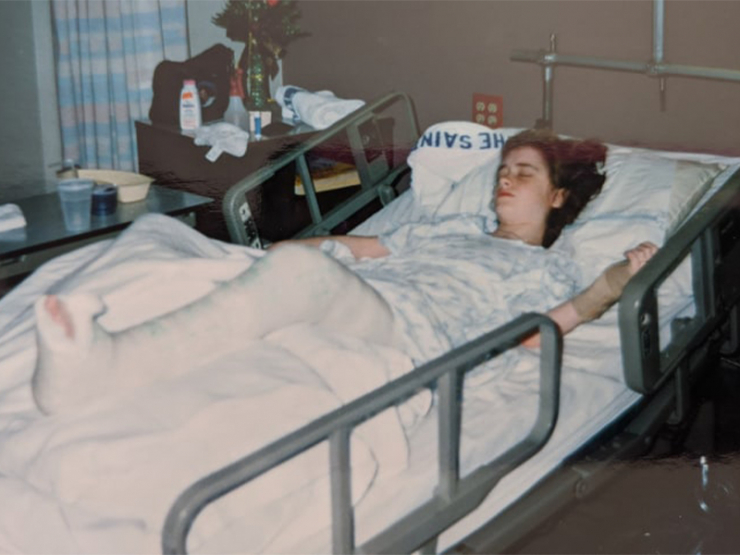 What those poeple didn’t see was a girl who grew stronger with each twist and sprain, each tough day, and each disappointment. On Krissy’s final day of high school, with one hour left in the day, it happened again: she fell in the hallway, breaking her femur. This time, though, she wouldn’t heal from the break. Her leg was set wrong in its cast, and when the plaster came off 7 weeks later, Krissy had to swallow her most bitter pill yet: she would never walk again. 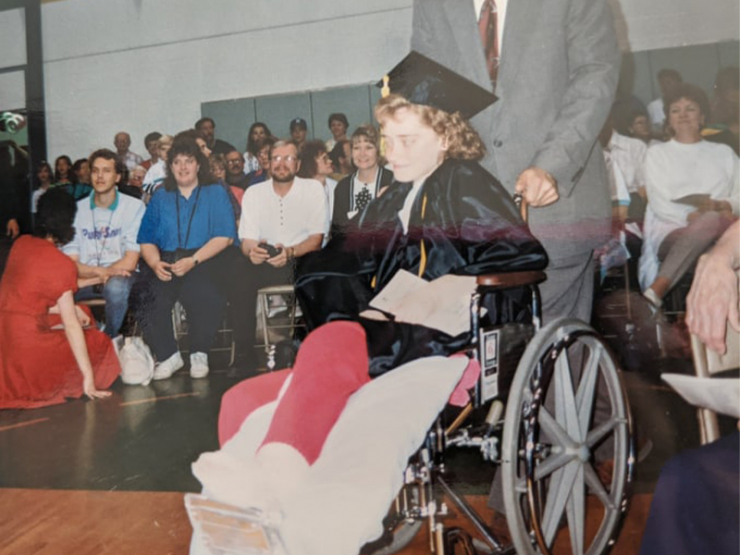 She had made it to graduation, two days after she broke her femur, and wheeled across stage to get her diploma. At the time, she had expected this to be a temporary setback, as her breaks usually were. She had no idea that her final unassisted steps would be the ones she took in that last hour of her high school career.

Krissy was used to injuries, but this one hurt more than all the others. Nevertheless, our unbreakable girl went on to college, earning an AAS degree. Her brother and his girlfriend at the time were also attending St. Cloud Technical School, and would take Krissy to and from class each day. One thing Krissy had learned between high school and college was to lean on the people who are on your team. Days of worrying about bullies were far behind her, as she created a bright future for herself and found her people. 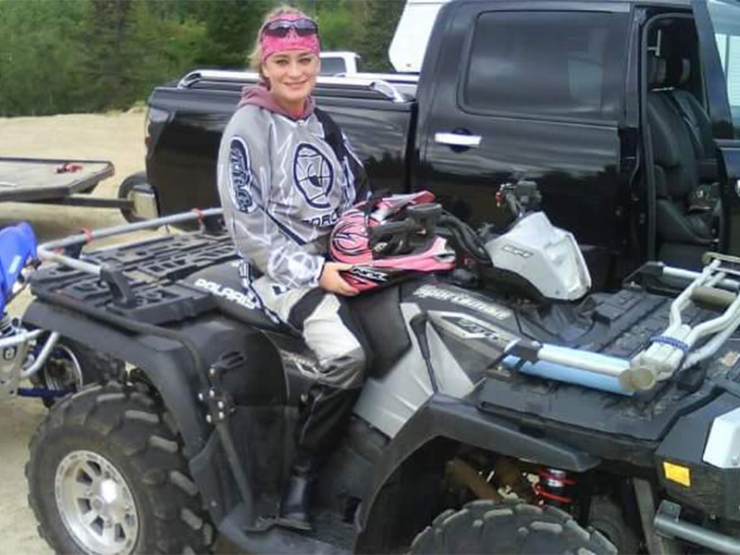 Much like post-bunker Kimmy Schmidt, Krissy never let her past struggles define her. She has a thriving career and is beloved by her boss, she gets out and lives to the fullest. 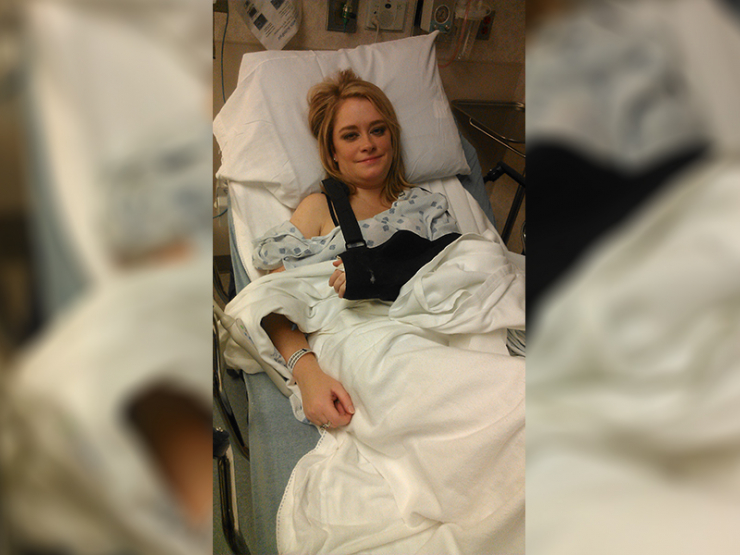 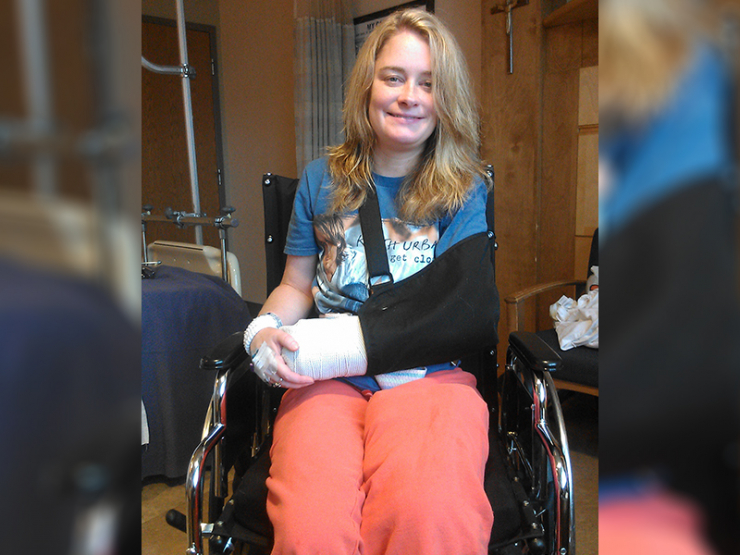 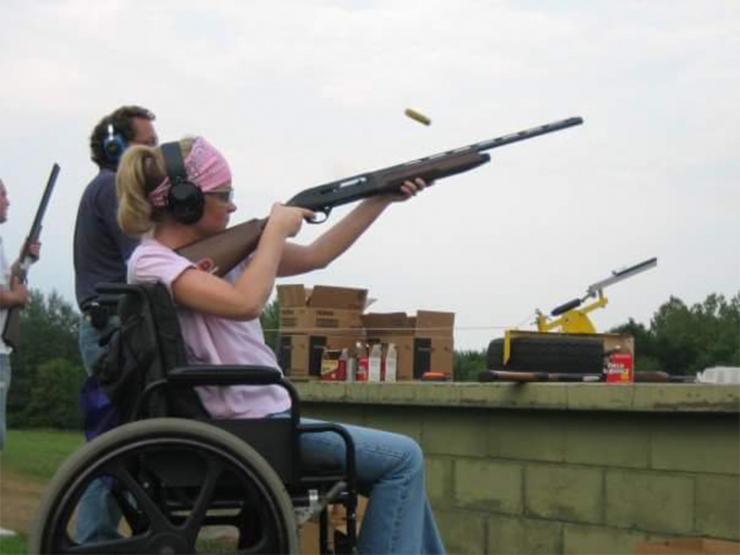 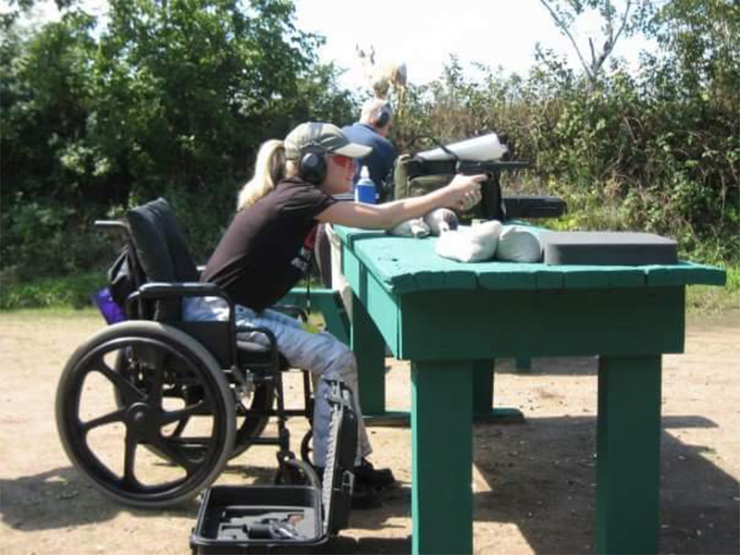 Krissy’s life was again turned upside down just a few years ago, though. 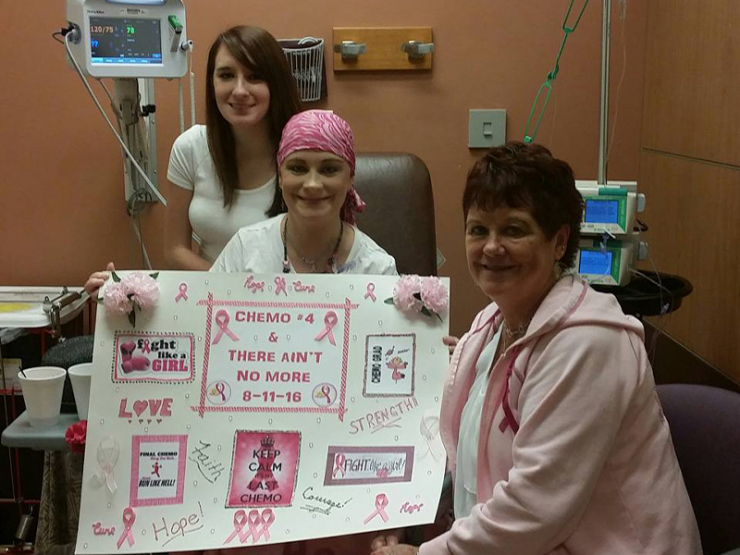 She had gone to the hospital to check on a cold that wouldn’t go away. Doctors scanned her chest to see what was causing her to feel under the weather, but they found something much more concerning than congestion: Krissy had a lump. She was diagnosed with Stage 2B breast cancer, then just two weeks after her diagnosis, she underwent a double mastectomy. 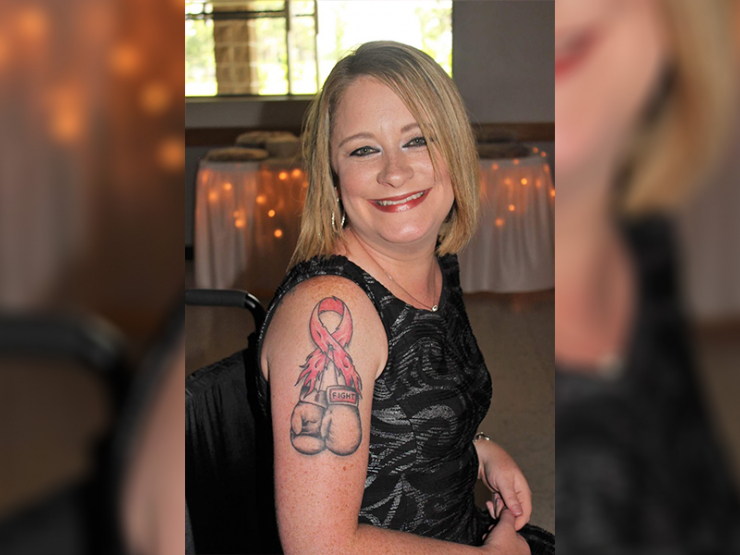 Not one to back down from a challenge, Krissy, with the help of her amazing friends and family, kicked cancer’s ass and has been all clear since 2017. 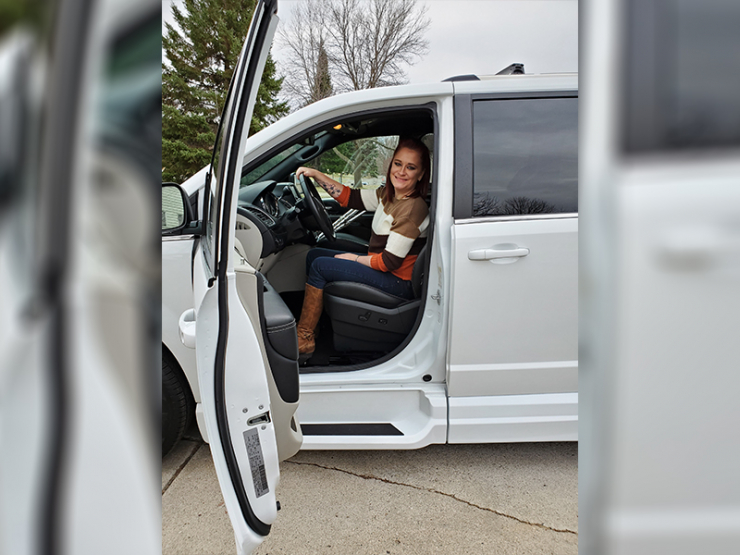 Little could high-school Krissy have known that, decades later, she’d find a huge, dedicated group of people who would hear her story and play an active role in its next chapter. I’m talking, of course, about YOU GUYS, our Chive Charities donors and community. Your donations allowed us to buy Krissy a $47,000 wheelchair-accessible van from our friends at AMS Vans that she will be driving herself. As a very independent person, Krissy doesn’t want to rely on friends and family to always take her where she needs to go. While she could not have gotten here without the immense love and support she has received from her loved ones, especially her Mom who she loves immensely and has been there through thick and thin, Krissy is ready to be take this next step of independence. Now, her life is completely in her own hands and the future is wide open! 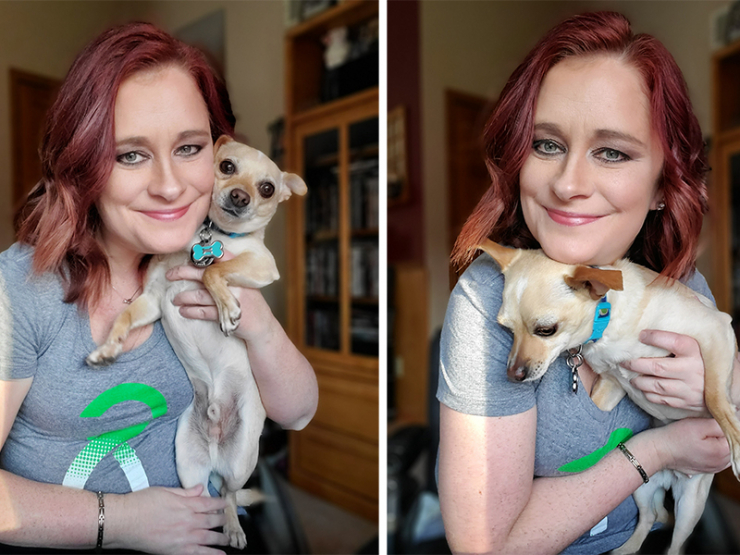 While that part is hugely exciting, and completely life-changing for Krissy, the lasting impact of this grant can truly be found in the community that she can now call herself a part of. Our work isn’t done once we drop off a grant item, you know. Our recipients forever hold a piece of our hearts, and we, as well as you donors, are here for them whenever they need someone on their team. Now, Team Krissy is thousands strong!

Are you ready to join Chive Charities as we fight for the Unbreakable Underdogs of the world? Becoming a donor is super easy and totally flexible; you can give a little or a lot, one time or once a month, whatever you can do. I know we all feel like we are living in a bunker right now, waiting for the world to crumble around us. But we, like Kimmy Schmidt, and like the Unbreakable Krissy G., will all emerge from these crazy times stronger than ever, and what’s more, we can do it together. Join the team HERE!