What two can do

“Hi, my name is Sam Ferguson; I am 21 years old. I have a rare progressive neuromuscular disease called Friedreich’s Ataxia, also known as “FA.” FA affects every single part of my body. In fact, my wife is typing this for me because I have limited use of my hands and can no longer write or type.” 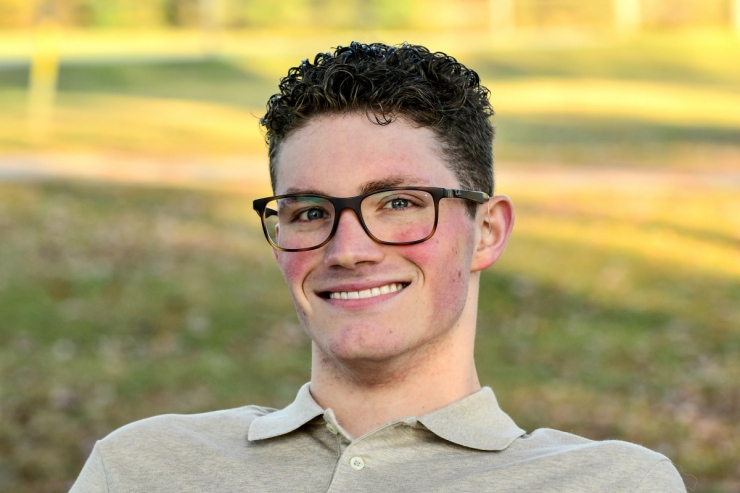 So begins your introduction to the amazing duo that is Sam and Katlyn Ferguson. 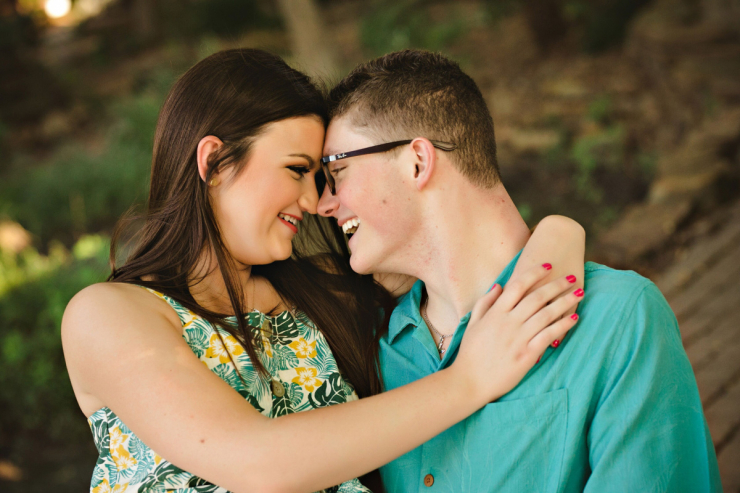 This pair from Montgomery, Texas have known each other nearly all their lives. Coming from a town with a population of fewer than 2,000 people, it seems likely they would come to know one another at some point. What was less likely is how their lives would come to be intertwined, and how they would become each other’s greatest partner and advocate.

It started when Sam was just three years old. His older brother was diagnosed with Friedreich’s Ataxia as a child, so when Sam began exhibiting similar symptoms (balance and coordination issues, namely), his parents decided to have him tested, too. The results showed that both brothers had FA, a degenerative, life-shortening genetic condition. 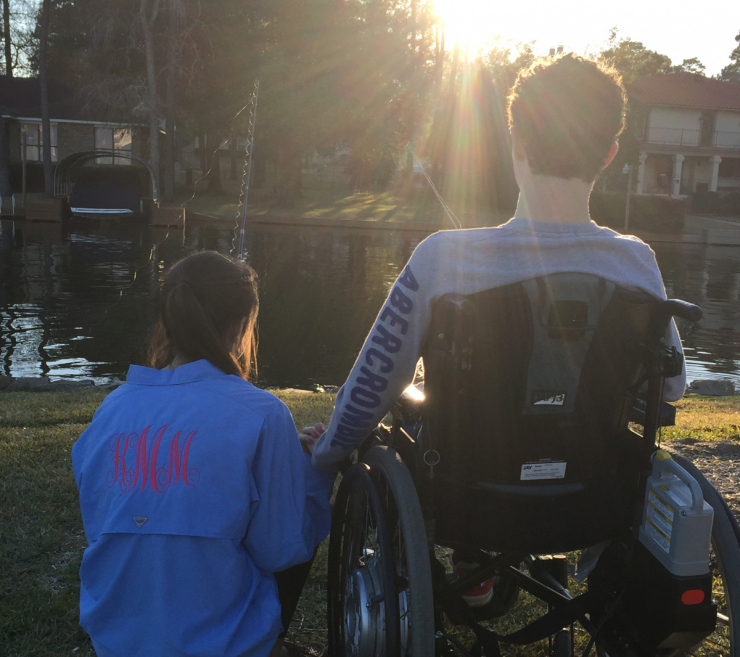 “Within a year of my diagnosis,” Sam explained, “I was already experiencing symptoms, including loss of coordination, which made it difficult to walk and led to me falling often. By the time I got into the fifth grade, my symptoms really started to escalate. My scoliosis (caused by FA) got so bad, I had to receive a complete spinal fusion.”

While the spinal fusion surgery was a success, he started using a wheelchair more often because the effects were too much for his body to handle. Things were really starting to pile up, and he was upset to miss nearly six months of school post-surgery. It wouldn’t be the last time FA caused some challenges for him at school.

“When I got into high school, my disease progressed at a rapid speed and my medical team noticed several new issues all caused by FA, including optic nerve damage, nystagmus, myopia in both eyes, and bilateral hearing loss,” Sam told us. “I now wear glasses and hearing aids to maximize my hearing and vision, but it’s nowhere near perfect.” 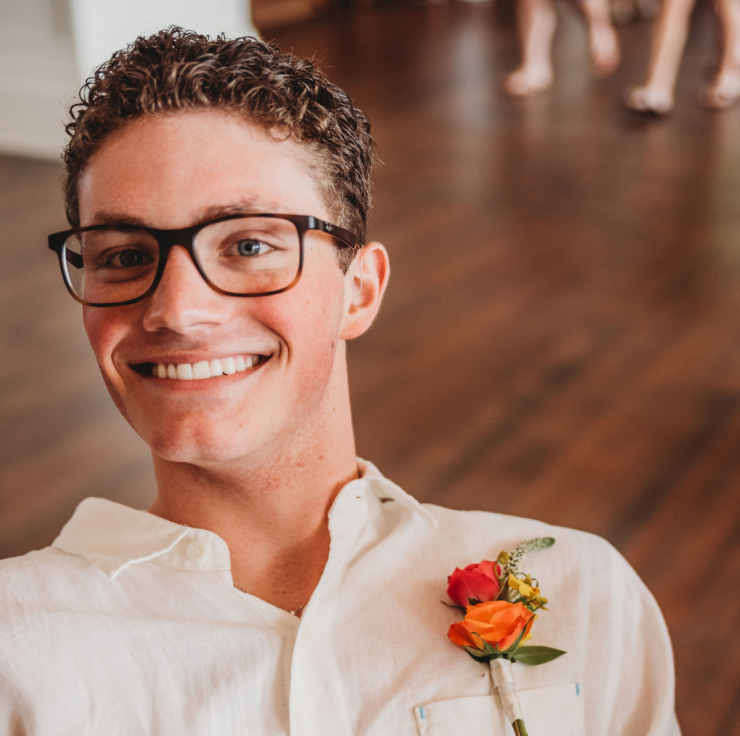 These new difficulties, in addition to all of his other symptoms, made school very hard for Sam. As he said, he was “swept under the rug because it was too much for the school to deal with.” Luckily, right around that same time, he started dating the love of his life (and now wife), Katlyn.

“When we first started dating, it never occurred to me how different our relationship was from most people’s relationships,” Katlyn said. “Obviously, I could see that Sam had a disability. I knew Sam had FA, which is a terminal illness. But despite those challenges, it never made me hesitant towards loving Sam.” 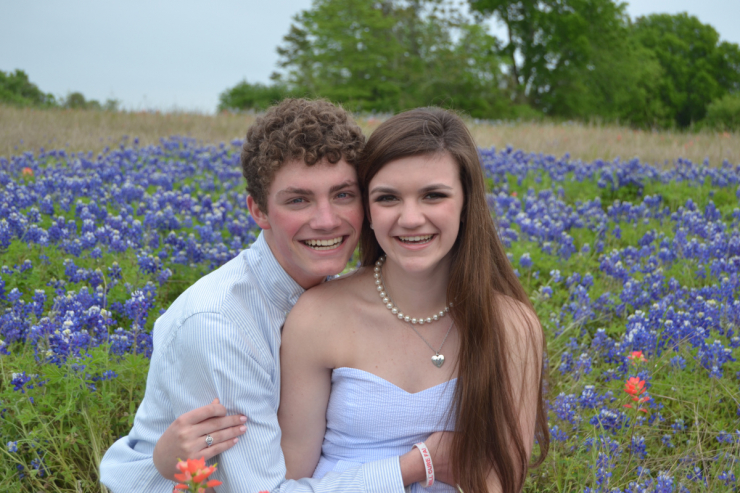 If anything, Sam’s condition brought the two closer together, especially as Katlyn got a front-row seat to the challenges and adversity Sam had been experiencing at school. Most of his issues stemmed from the lack of an aide to help with his needs.

Sam had exceptional intellect and mental fortitude, but was one of very few students with a disability. He would sit in class, soaking up all of the information and trying to contribute, but unable to complete tasks in the same manner as them (like writing papers, for example). It wasn’t that he couldn’t do it - he just couldn’t do it in the exact same way. 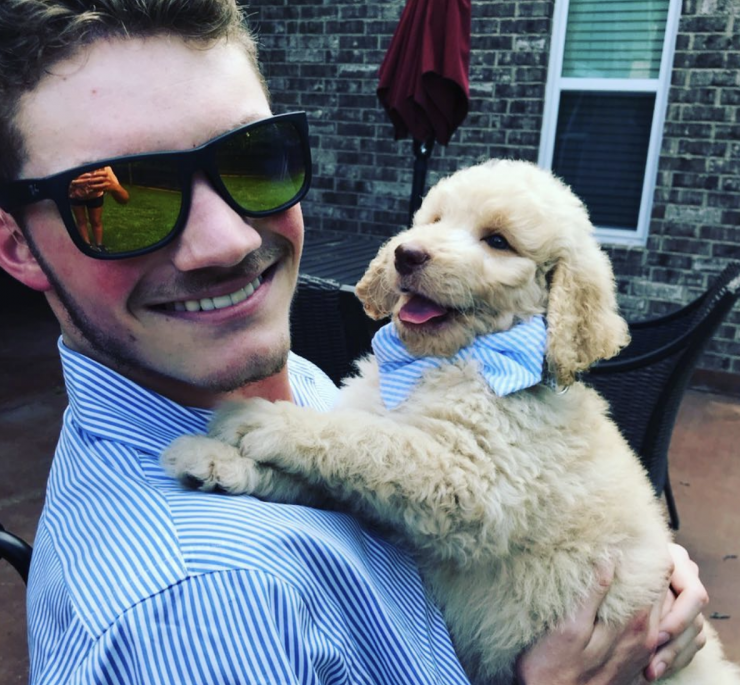 He even told us how he had to ask friends to take him to the restroom, which worked for a little while until teachers complained that he was selfishly keeping the other students from their own time in the classroom.

(By the way, Sam finally did get that aide he had been asking for throughout his high school experience. Just in time for his senior year.) 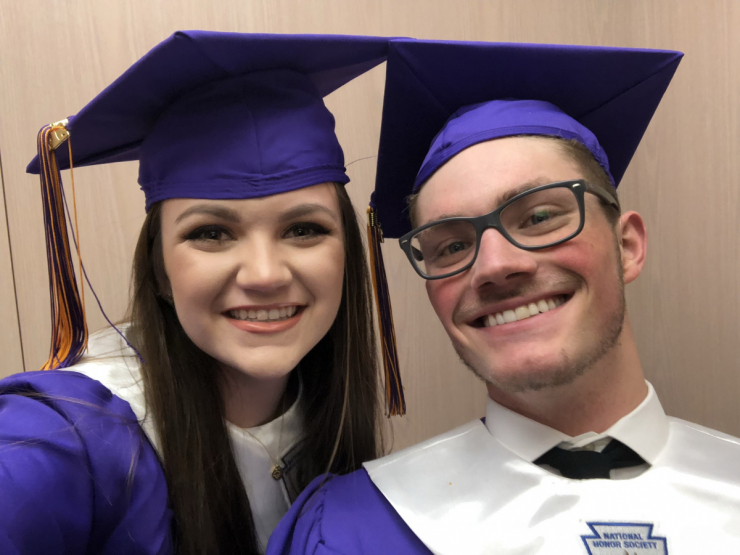 Thankfully, Sam and Katlyn have had each other through all the ups and downs life has thrown at them.

“Through these last six years or so,” she told us, “I have seen Sam’s resilience to any type of adversity, physically or mentally. He takes his health very seriously, working out every single day, eating healthy, and making sure to take his daily medications and attending all doctor and therapy appointments.” 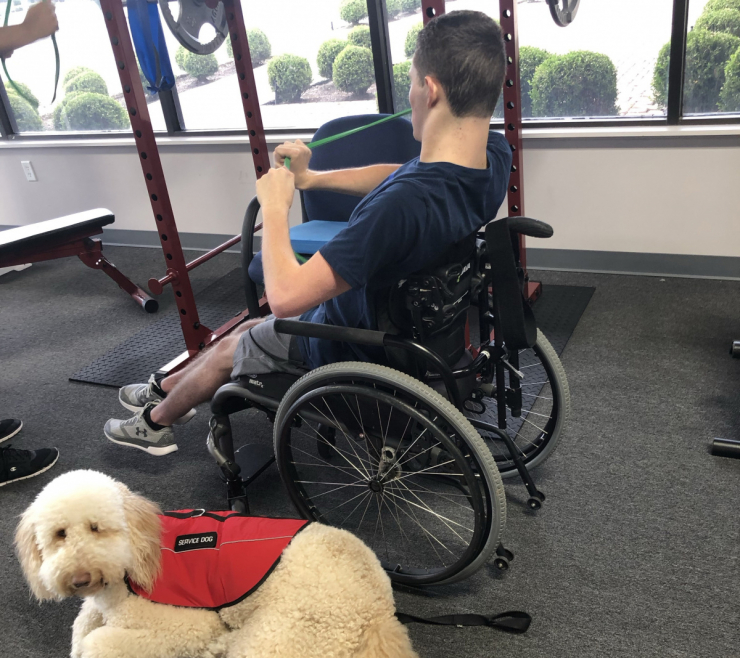 When we commented on his dazzling white smile, they both laughed. “He’s the only person I know who wears his retainer every single day,” Katlyn joked.

As for Katlyn from Sam’s perspective, well, we’ll let him tell you about her:

“She is a dedicated college student and the best wife and caretaker ever. She helps me with everything I need, and we have learned a lot through this process of being on our own. We’ve also learned a lot about the underrepresentation of disabled people, the lack of funding, and most importantly, the lack of knowledge surrounding disability.”

It’s amazing what two can do. 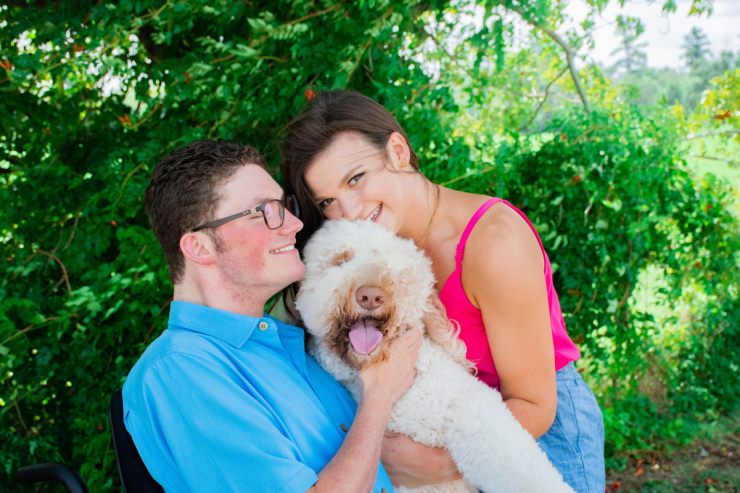 Most people wouldn’t fault them if they decided to hunker down in their one-bedroom apartment and just take it easy for a while. But that’s not who they are. Quite the opposite, really.

They’ve taken some of the lessons learned from negative experiences and used them to benefit others. They started a YouTube channel (which you can find and watch HERE) to talk candidly about what life is like as an interabled couple. Sam is also an advocate for the Friedreich’s Ataxia Research Alliance and has made it his mission to help educate society on FA. 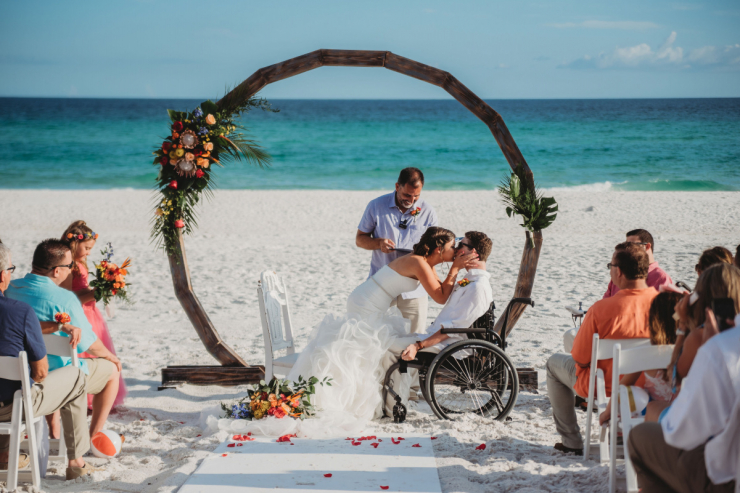 They’re a truly remarkable duo, a powerhouse couple with all the potential in the world. There was only one thing holding them back.

Sam is a full-time wheelchair user and they don’t have a wheelchair-accessible vehicle. That means Katlyn literally does all of the heavy lifting.

“Katlyn currently lifts me into the car, which is not comfortable for me or for her,” Sam said. “Often, at least one of our backs or hips is popping or cracking in some way. On top of an unsafe transfer from my wheelchair to our car, I have a manual wheelchair that we also have to break down and put together each time we get in and out of the vehicle.” 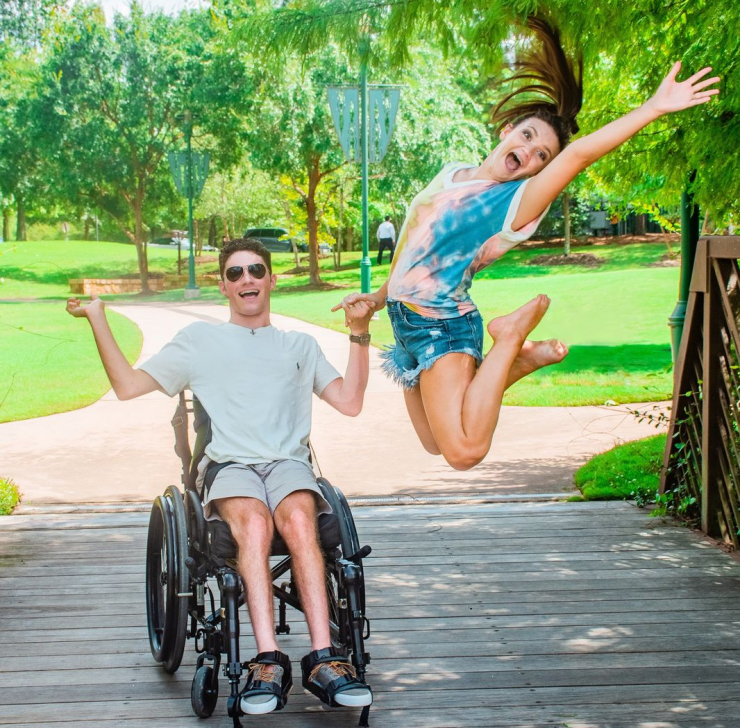 For so long, it had been just the two of them, figuring things out on their own, making do with what they had. Until, of course, they met Chive Charities and our friends at the Dallas Bourbon Club.

A few weeks ago, we partnered with the Dallas Bourbon Club on an exclusive giveaway with proceeds directly benefiting Sam and Katlyn. Each $25 donation equaled one entry for the grand prize, including: 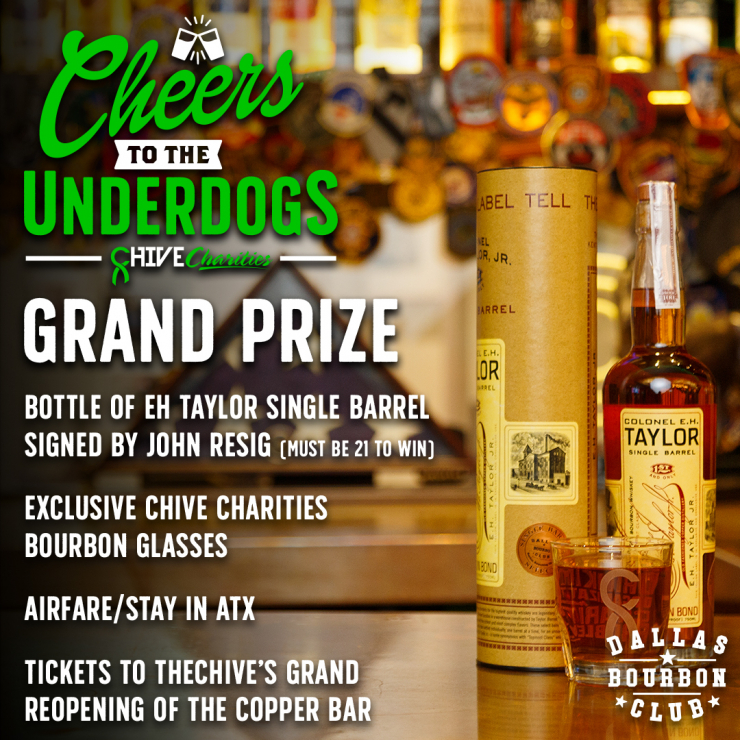 No surprise to anyone, Chive Nation completely crushed it and raised $21,895 to help fund the cost of Sam and Katlyn’s wheelchair-accessible van from AMS Vans for a total impact of $40,861.

A powerhouse duo met by a powerhouse community. Doesn’t get much better than that! 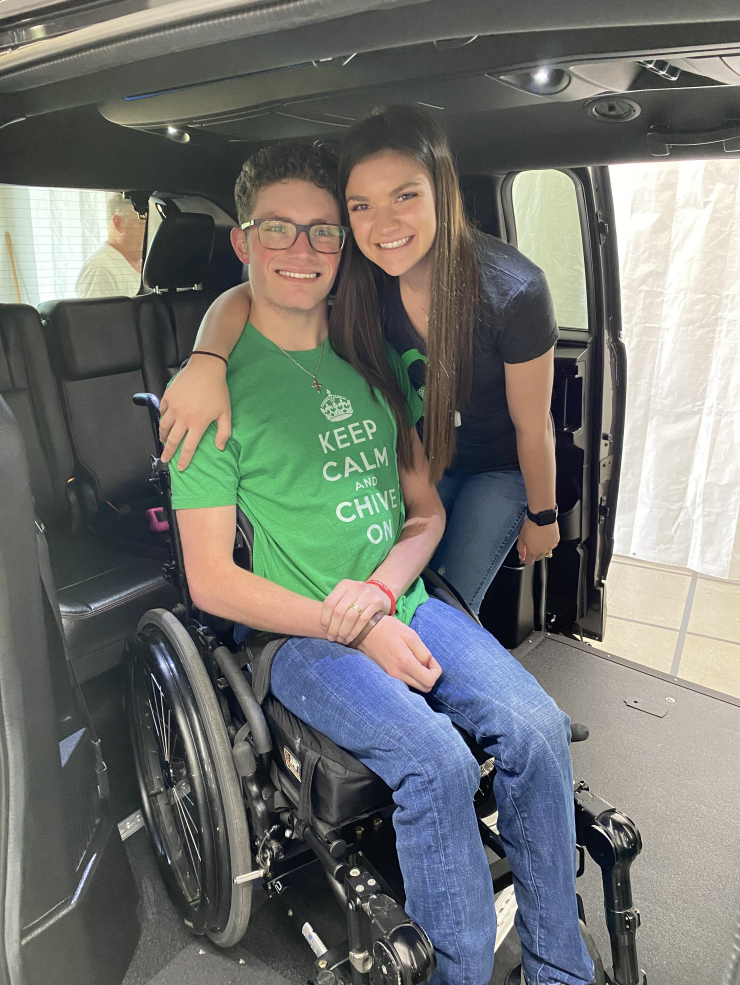 With the support of people like you (join our donor family HERE), Sam and Katlyn finally have what they need to simplify their lives and get back to just enjoying their time together. 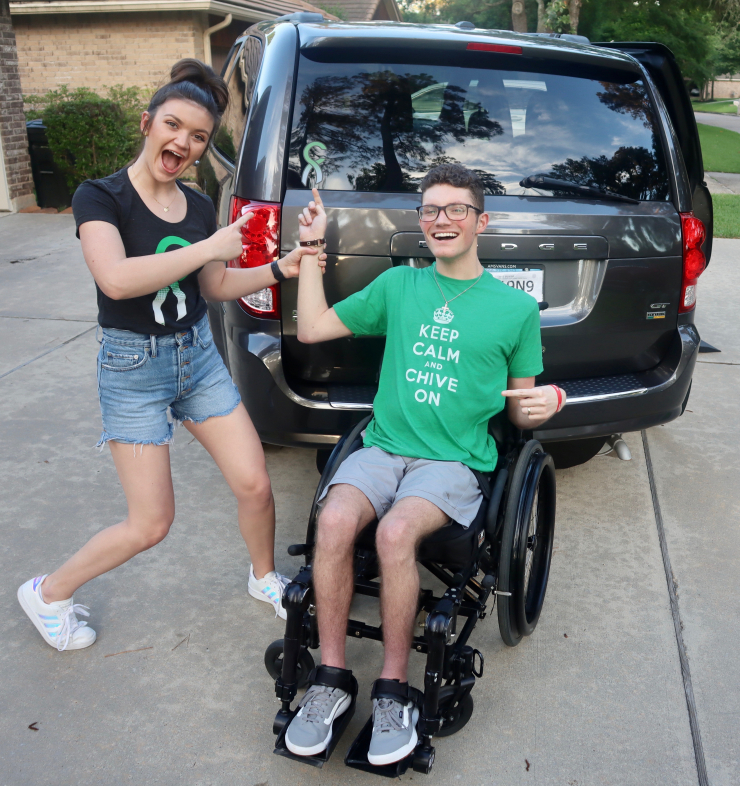 “Now, we will have the opportunity to just hop in the car and go, which is something we’ve never been able to experience,” they told us. “We cannot say thank you enough to every single person who selflessly gave to help provide a much-needed item to a complete stranger. THANK YOU!” 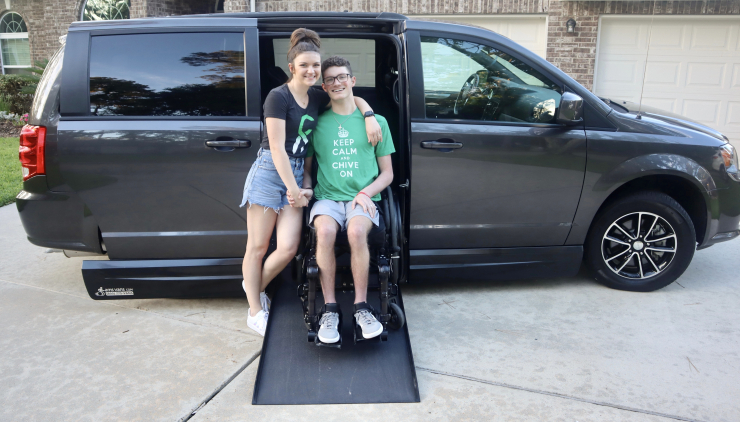 Sam and Katlyn gave a masterclass on what two can do, and we carried that sentiment through to our partnership with the DBC to help double our grant impact. By teaming up with Chive Charities as a monthly donor, you’re becoming part of another dynamic duo. Watch and see what we can do. DONATE HERE.