A generous community embraces one Chiver's journey towards independence

A generous community embraces one Chiver’s journey towards independence

When Brittany arrived at the campus of UC Berkley, she had lived through more experiences than most of the 18-year-olds around her. At 11, Brittany was rushed to the ER after her body went slack and doctors couldn’t find a pulse. Two weeks later she woke up on life support, being kept alive by a feeding tube. As doctors searched in vain for answers, a neurologist flew in to look at Brittany’s case and diagnosed her with ADEM with Transverse Myelitis. She would never walk again.

For a reason we will never understand, a disease had entered Brittany’s body and latched onto Brittany’s immune system, forcing her body to attack itself. It forever changed the course of her life in less time than it took me to write this sentence.

Those who get pushed to the brink and have the resolve to crawl, claw, push, fight back just to keep getting the chance to wake up and do it again possess a strength the rest of us can only dream of. And after you look death in the eye and decide ‘not today’ – the world around you comes into focus. Your path becomes more evident, more urgent. And a little voice whispers in your ear: You are wasting precious time.

Once Brittany was out of that room she began moving forward and never looked back. Her past had been riddled with obstacles, disappointments, bullying, and fear. Days had slipped through her fingers; things had happened she couldn’t control. She had never gone to a school dance or dated a guy because she had never felt “normal.” On the other hand, her future was a clean slate that held infinte possibilities. “The thought of being that much closer to freedom,” Brittany said, “makes my eyes water.”

“The thought of being that much closer to freedom,” Brittany said, “makes my eyes water.”

So it was here, now, in the present, that she had work to do. Brittany went back to school. And in December 2014, she received a Bachelor’s degree in Business Marketing. She was the first person in her family to graduate college.

Brittany began seeking out people with whom she could relate and look up to. She began attending a support group for other people affected by Transverse Myelitis. It was here, among friends, she felt for the first time in years like she really belonged. And one of those new friends knew a woman named Melissa Smith, and told Brittany about a little thing called Chive Charities. 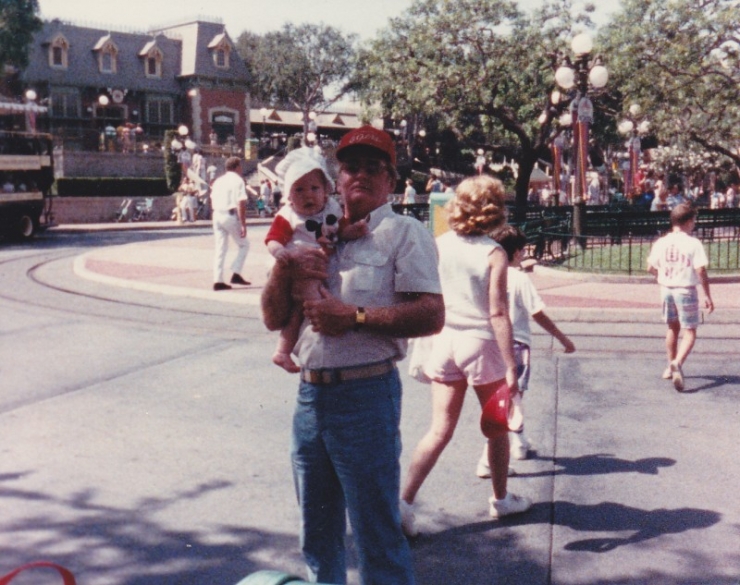 Brittany and her grandpa on her first trip to Disneyland. Her grandparents have always been her biggest fans. 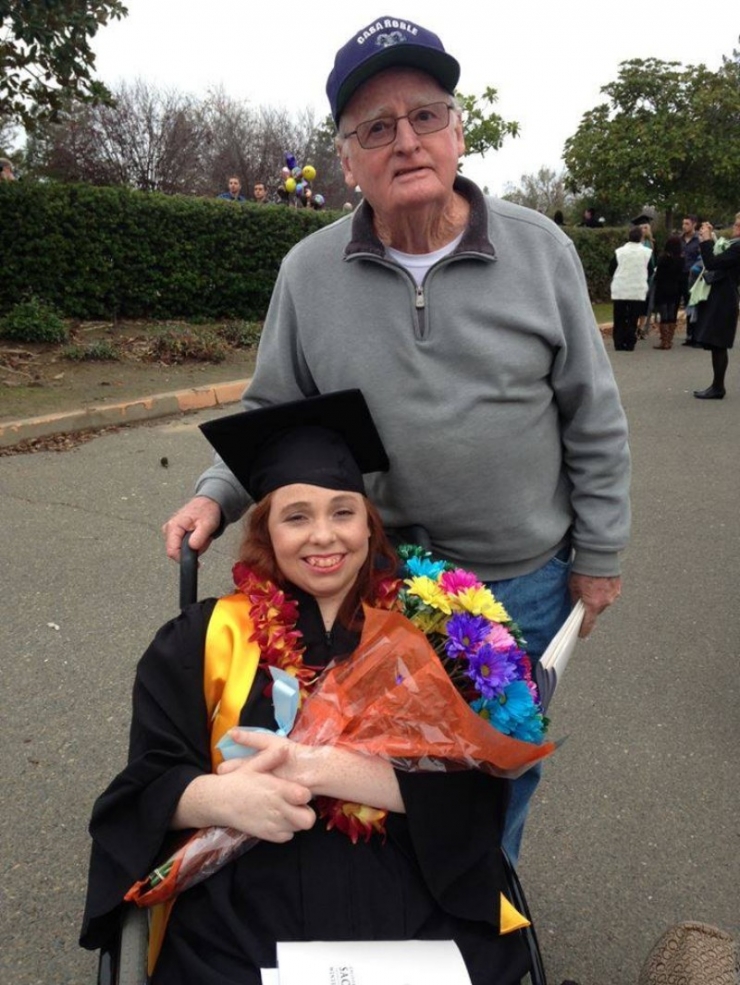 When Brittany graduated, it wasn’t just her victory. It was shared between her friends and family – everyone who had helped her overcome obstacles on the way to accomplishing her dream.

Her grandpa sacrificed meetings, business opportunities, and took time off work to drive Brittany to classes so she could finish her degree. He still works full-time to support his family. 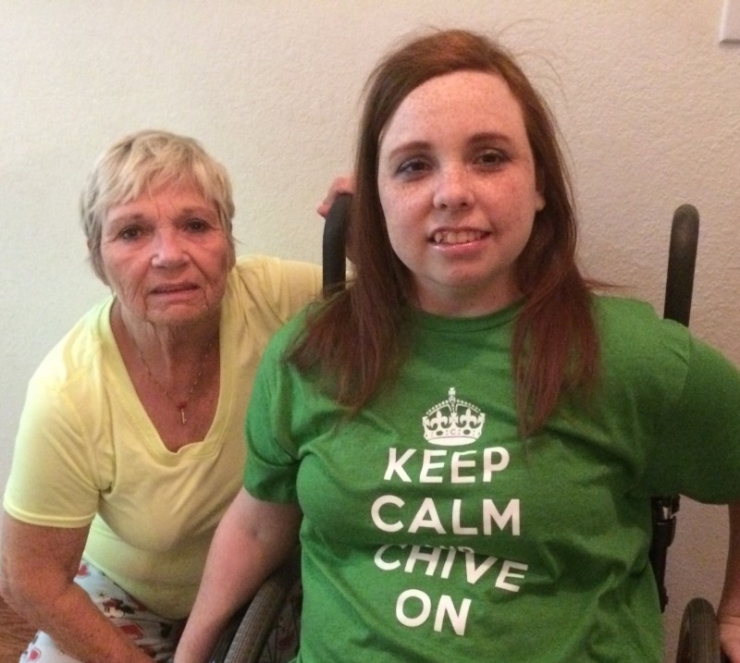 Brittany with her grandma. For her adult life, she has depended on her grandparents for transportation. They were happy to help, but Brittany felt guilty for asking that much of their time, and she ached for an independence she hadn’t known since her diagnosis.

When she found out about Chive Charities and how we’ve helped with mobility assistance in the past, she felt a flutter in her heart. “I can’t adequately explain to you or others just how momentous this would mean for my life,” she told us. “There are no words that could ever properly illustrate the freedom I would feel being able to go see friends or go to Target to get groceries or go to see a movie without begging my grandpa. The insignificant little things many people take for granted every day in their lives would mean a complete, – vast, extraordinary, monumental, gargantuan, and every other word in the thesaurus meaning ‘huge’ – change in my life.” 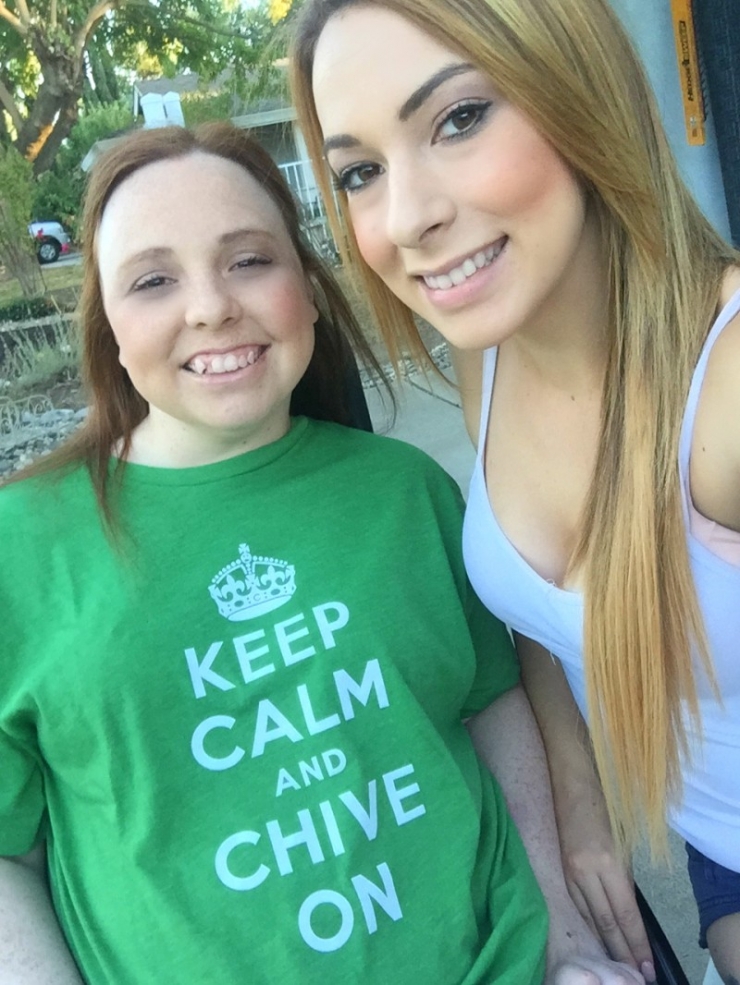 Brittany and her sister, Taylor. Brittany is close to all of her younger siblings, including Robert who is serving in the Navy and also happens to be a Chiver. He introduced Brittany to the site, and when she asked what it was all about he said it was “kinda like a BuzzFeed but better.” 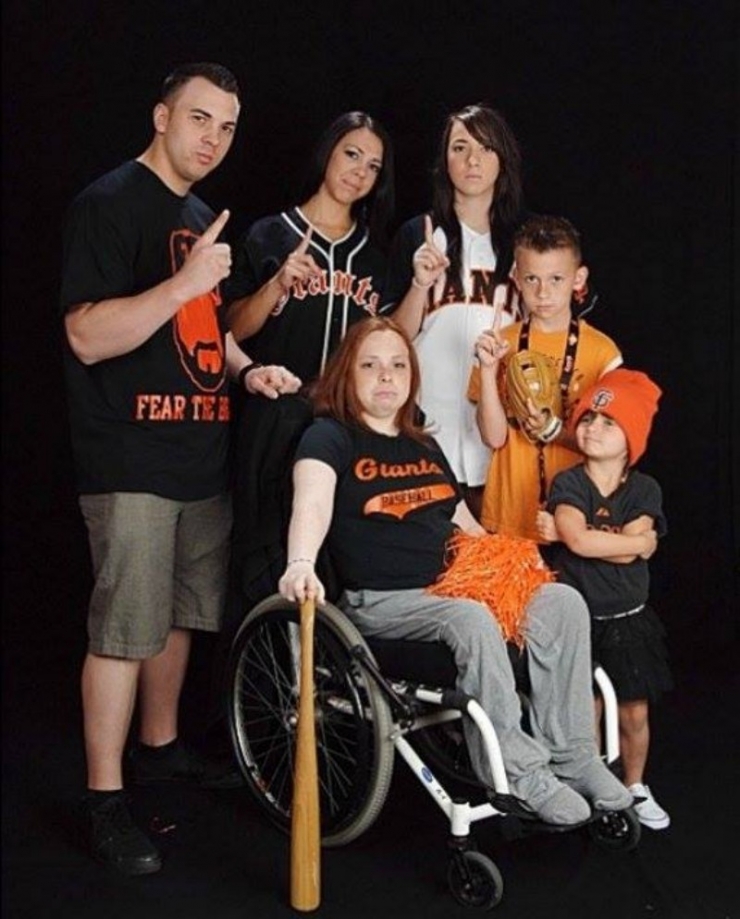 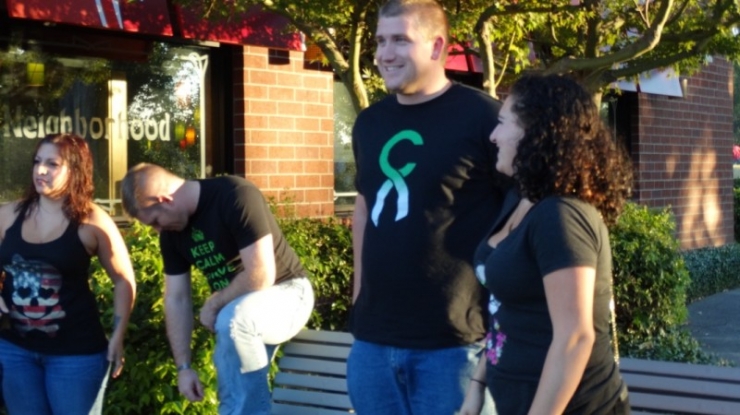 Last week we had a team meeting about Brittany’s story. Because she was a fan of theCHIVE and lived in Sacramento, we entertained the idea that someday, Brittany could get involved with our NorCal Chive and Chive On Bay Area chapters.

“Or,” we said, “we could see if they’re doing anything this weekend…” 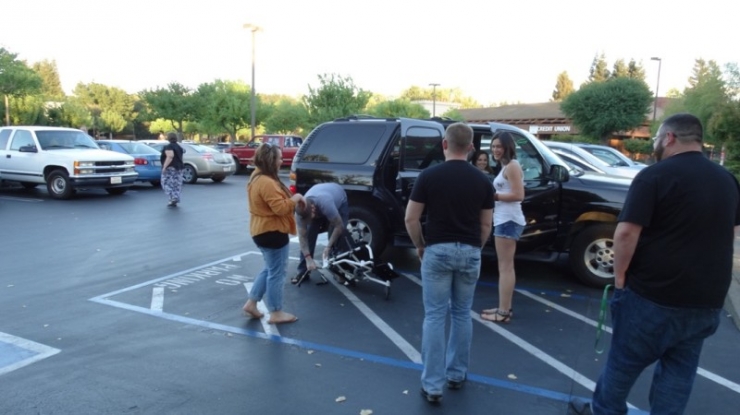 A few minutes and a couple of phone calls later, and a carpool of excited Chivers were driving the 2 hours to Sacramento to meet Brittany.

Because she relies on other people’s time schedules for transportation, she met them Saturday at a neighborhood bar. A friend had to unload and assemble her wheelchair, lift her out of the passenger seat and secure her in her chair. This process takes about 10 minutes. 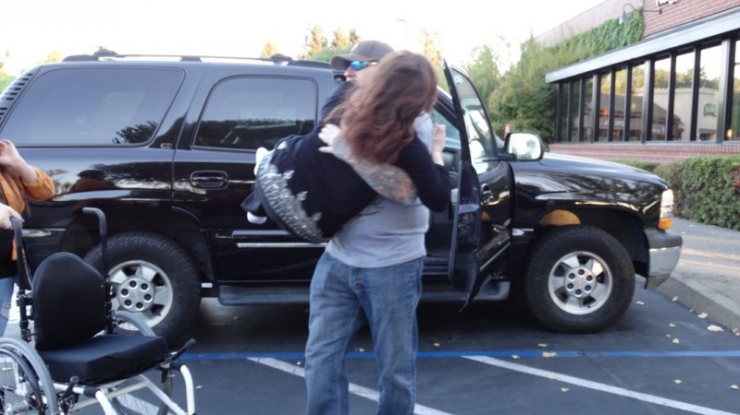 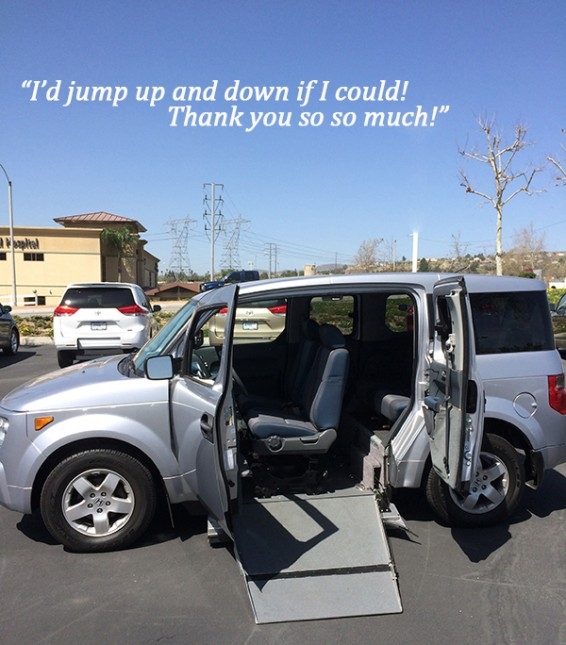 Because her fight towards independence motivated her to reach out to Chive Charities. And a grant from our Chive Fund donors purchased for Brittany this vehicle.

So the next time Brittany wants to do something, she’ll get in her side-entry Honda Element, drive with her hand controls, and do it. It’s that simple. 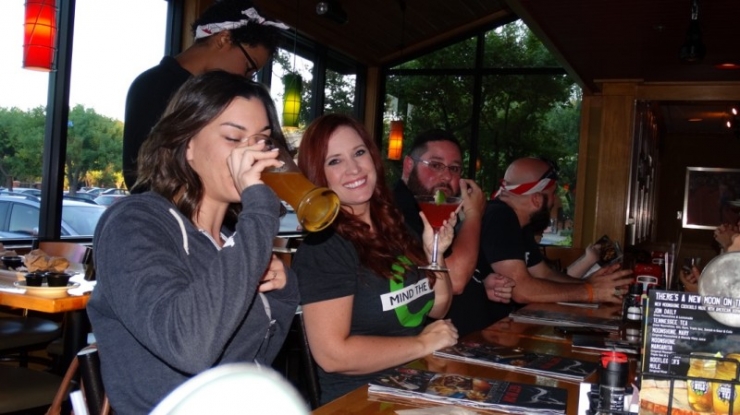 The day after their meeting, I chatted with Charlie Seufert of Chive On Bay Area who couldn’t help but gush about Brittany.

“She’s just amazing,” he told me. Brittany’s funny stories kept everyone laughing, and her humility kept them hanging on her every word.

“She’s one of us,” he said. “100%.” After the call I had tears in my eyes, but nothing could prepare me for the conversation I would soon have with Brittany…. 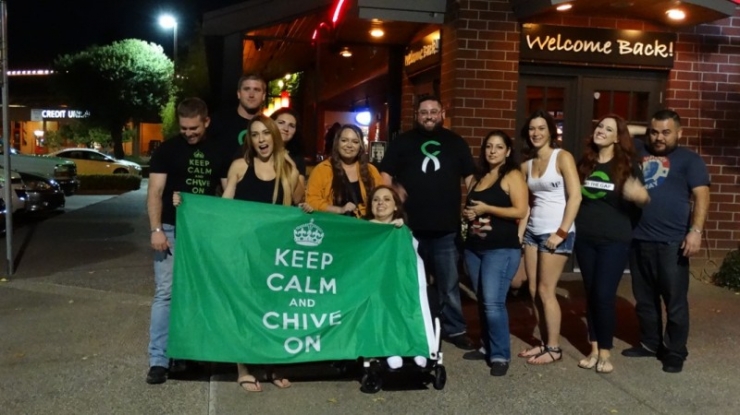 Last night was one of the best nights I’ve ever had. Everyone was so so nice and kind and treated me like a normal person. I was truly stunned by it all. I was shocked that they had all traveled so far to see me, it was such a great thing to try to wrap my head around.

I cried afterward because it felt so remarkable to feel so welcomed in their company. It felt like they really wanted me to be a part of future events and that feels surreal because I’ve never felt so accepted like that.

I met the amazingly welcoming ‘Captain’ Nick who expressed that the Chivers were just a band of misfits who try to do good and have fun. He mentioned that he had hundreds of dollars of tools stolen and his friends and fellow Chivers replaced them all and more! He said how great their friendship and support have been to him and that really made me hope I could really be included among them.

Charlie gave me an exclusive KCCO Giants colored sticker for when I get my own car and I LOVE IT! Captain Nick gave me a pin that he made that represented the Chive, and Charlie told me to pick any concert at the Shoreline Theater and they would set me up.

That night meant so much to me, I can’t fully express. The people I met touched my heart and they’ll never know how much. 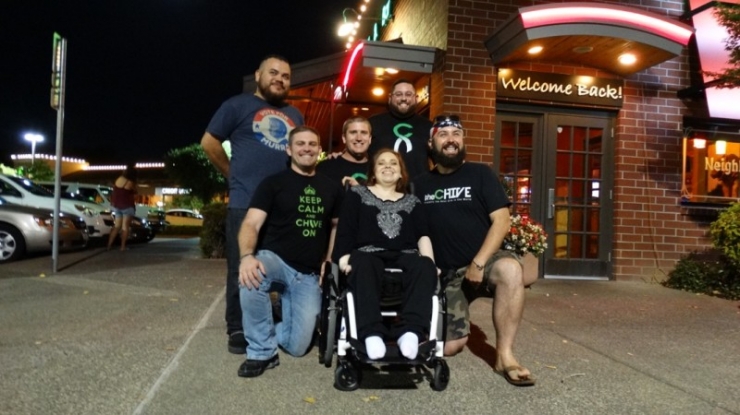 If you can still see the screen through your tears, know this: the Chive community might be made up of a bunch of misfits, who come from all walks of life, with all different backgrounds. They might look or dress or talk different than you, but they all want one thing, and it’s pretty simple – to make the world a little better and have a little fun. And hell, maybe drink a little beer.

Brittany proved there is not much that will stand in her way once she has decided on a goal. But at some point, everyone could use some help. This life is tough, and if you’re trying to get through it alone you’re missing out on the best part.

So when Brittany decided she valued independence above all, Chive Charities answered with a $27,000 grant that gave her the tools to reclaim her mobility with a hand-controlled car… so she can drive to all future Chive meetups on her own. 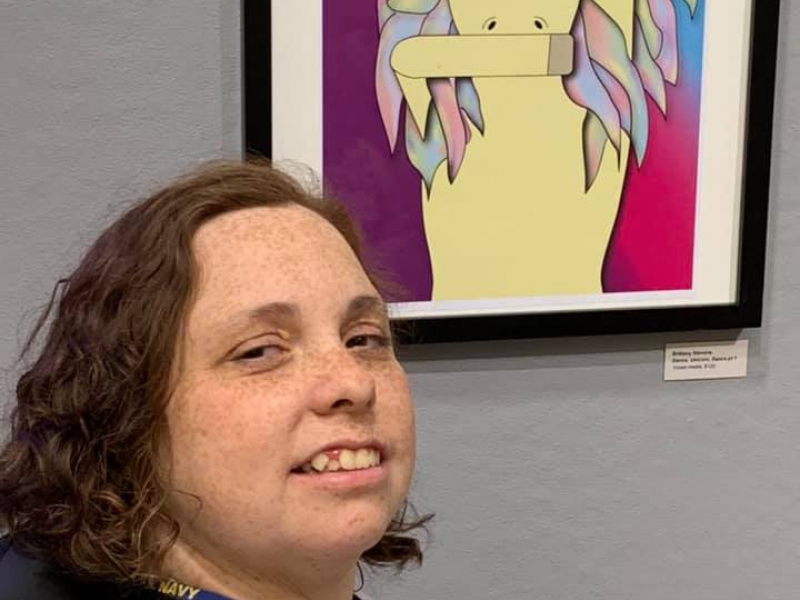 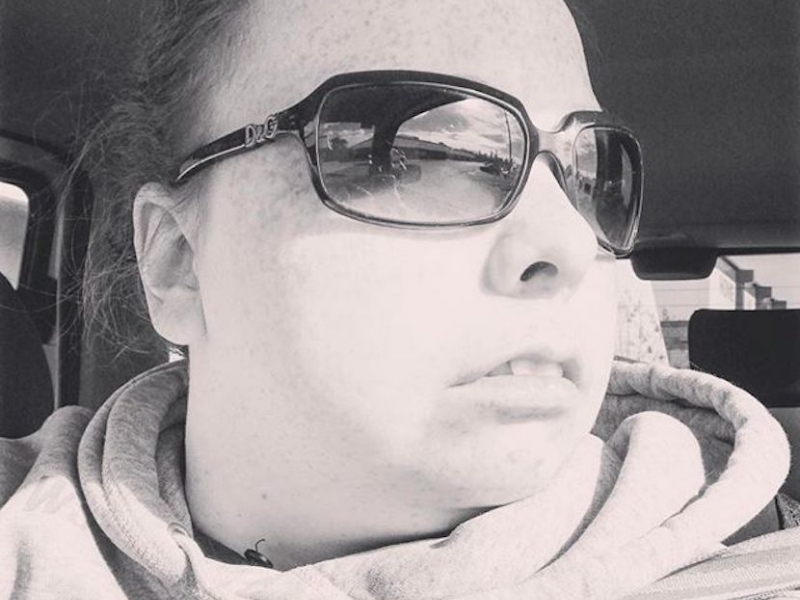 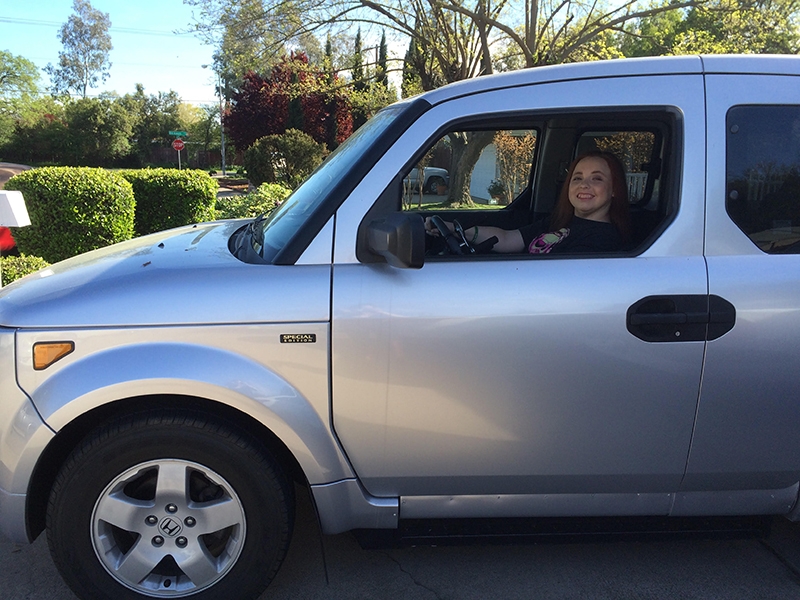