The terrorists put Sean, 21, and his friend, Sgt. Thomas MacPherson, 26, in his sights and extended the barrel of the gun out the 2nd story window.

The initial burst blasted Sean to the ground. Sgt. MacPherson lay beside him, dead of his injuries. Sean quickly composed himself and radio’d the enemy’s position. His unit responded quickly and an ‘extremely heavy firefight’ ensued. Amidst the heavy fire, the Rangers dragged Sean’s body to a corner to provide cover for their injured brother.

At the time, the extent of Sean’s injuries were unclear, nobody knew how many times he had been shot or where. Once the enemy was dispatched, Sean’s body was transported to the medics to assess the injuries. Sean was still fully conscious and aware.

Sean had been shot 13 times. He was losing blood fast and needed 6 units of blood immediately. With precious minutes of life remaining, Sean’s unit and the medics improvised an on-the-spot emergency blood donation. His brothers lined up, needle to needle, arm to arm, and began direct infusions to keep Sean alive.

I’m not sure what kind of grit it takes to get shot 13 times and survive, you’d have to dig through more than a few medical journals to find somebody who has.

I spoke with Sean about what it’s like to wake up and find out you’re paralyzed from the waist down for the first time. “You can’t imagine anybody being ok with it, I wasn’t. It sucked. But you deal with it the best you can, I had an amazing support system. My parents were there when I woke up. My girlfriend basically quit her job and never left my side. My unit visited me when they returned from deployment. Also, I was alive.” 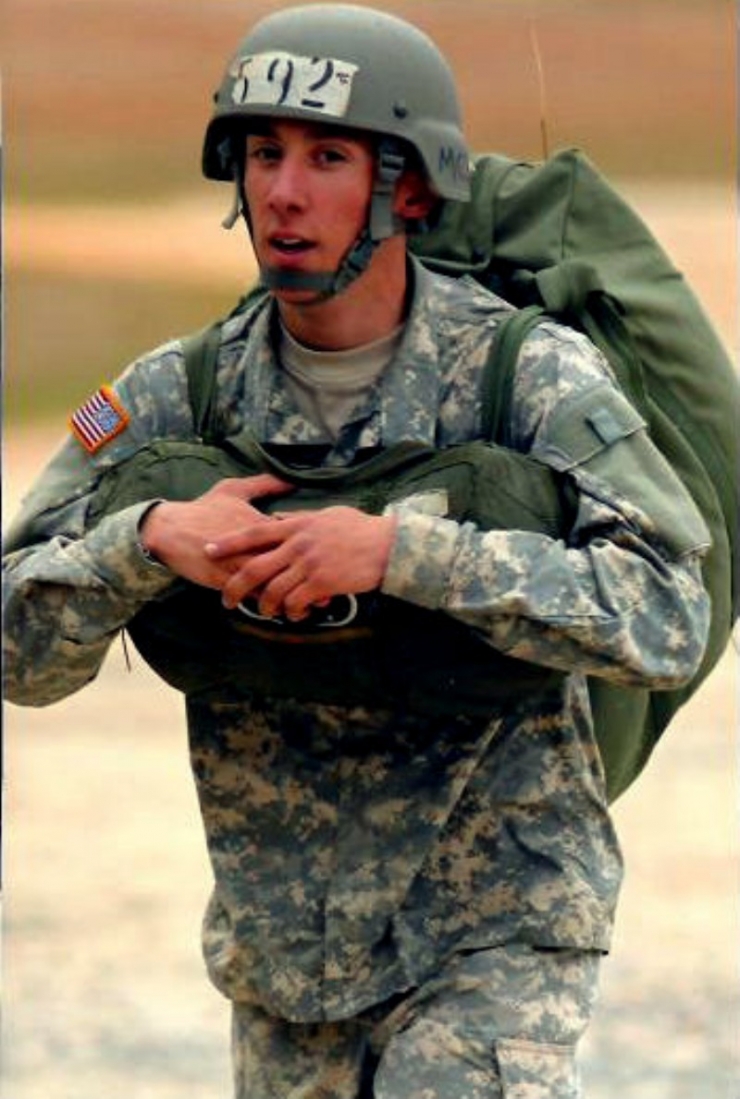 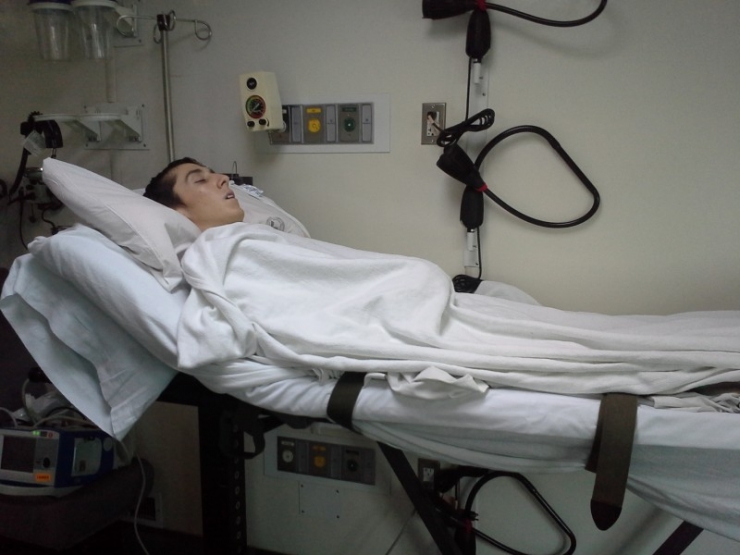 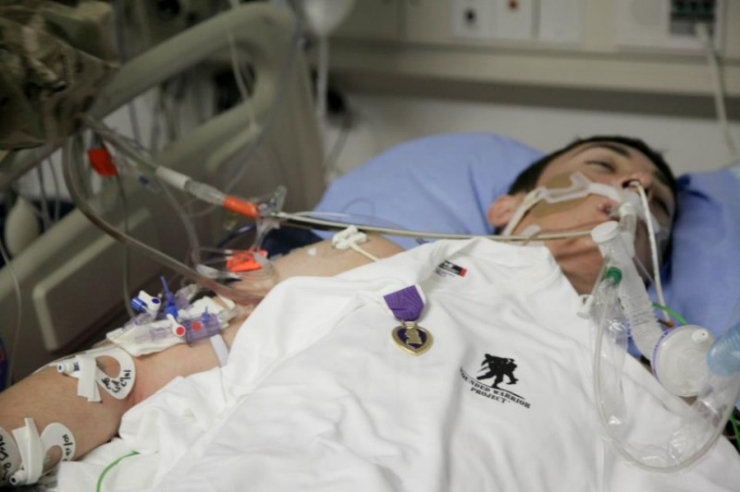 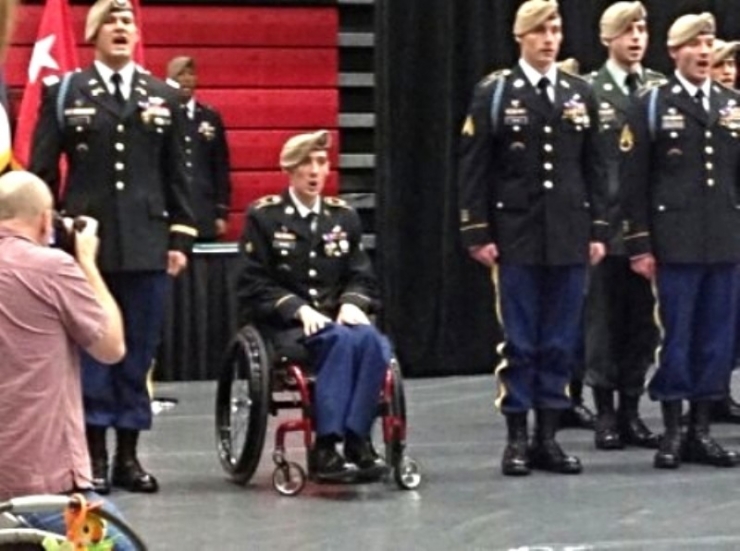 On October 15th, Sean was awarded the Purple Heart.

A new chapter in Sean’s life was about to begin. The complications from his injuries were so extensive, he would be hospitalized for nearly a year. The surgeries came and went. He had 3 vertebrae fused. One rodding surgery extended from his shoulder all the way to his tailbone, T12 to L3. Mobility for Sean was now a wheelchair.

It’s been nearly a year now and Sean still hasn’t returned home. And that’s where theCHIVE enters his story. 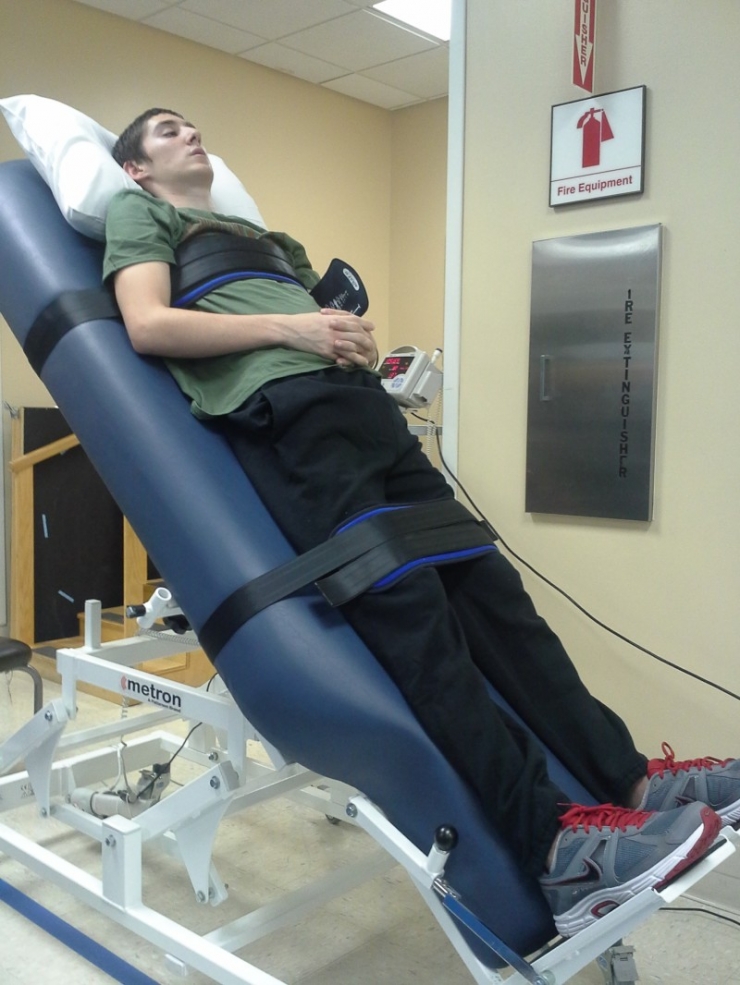 Sean will eventually learn to live life on his own but for the foreseeable future he’ll be moving back in with his parents, Dan and Gail. Their home in West Haven, CT, is not currently suitable to accommodate Sean’s special needs. Sean’s Dad and his brothers, Tyler and Kyle, have been committed to retrofitting the home for Sean.

The family started taking inventory of the needed home modifications. Sean would require a special chairlift to help get him up the stairs. Sean needed a bigger bathroom, all the doors in the house needed to be widened – they’re currently too narrow for sean to pass through.

The carpeted floors became an issue. The carpeting needed to be replaced with hardwood and tile to create a smoother surface for Sean to traverse. Even the light switches in the home had to be lowered.

The costs piled up at a dizzying rate. Low estimates put the renovations at $60,000. The family started a grassroots fundraising campaign receiving a $10,000 gift from the Pentagon Credit Union and $7,000 from a t-shirt fundraiser. Sean’s father even withdrew $16,000 from his own 401k. The family founded a Gofundme Page and sent the link to friends and family.

Sean’s mother Gail was searching for more help to bridge the financial gap. Help came in the form of an anonymous message on Sean’s Facebook Page. An anonymous Chiver gave Sean’s mother a link to Chive Charities Grantee Submissions Page with a note, “Contact these people. They will help you.”

Gail already knew theCHIVE well, “Sean was always talking about how theCHIVE got him through deployment. She had even purchased a Military KCCO for Sean. “It was so funny, the neck label on the KCCO reads, ‘Probably Bulletproof’. When I gave the shirt to Sean he laughed, ‘Where was this shirt when I was on deployment??” 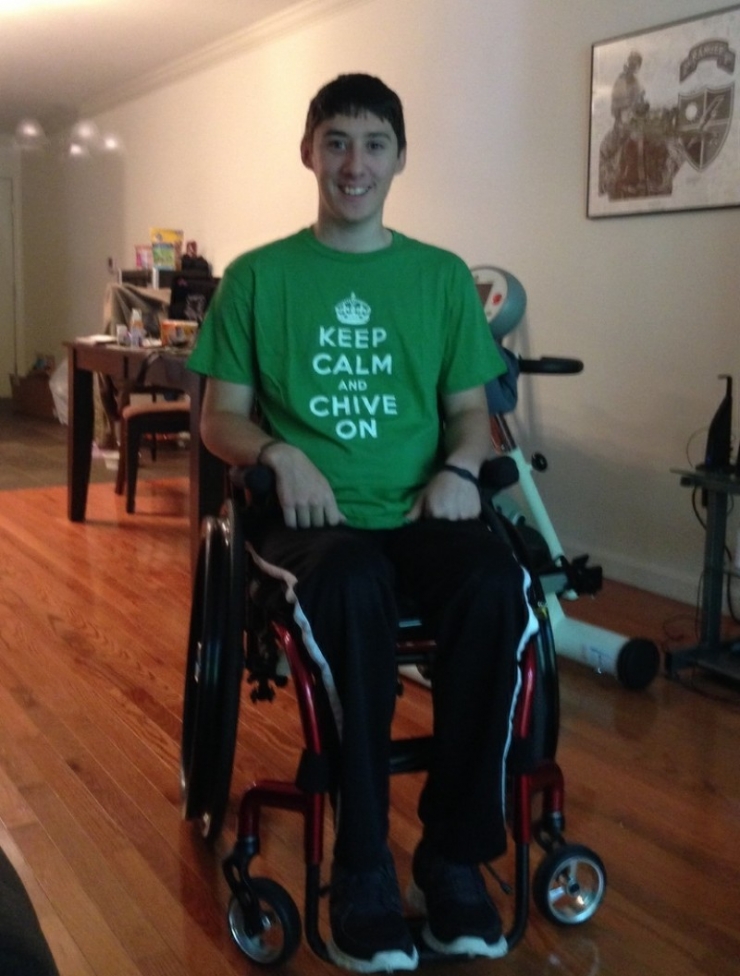 Gail contacted Chive Charities on her son’s behalf. The phone rang a few days later and the initiative to get Sean the help he needed began. Talking with Sean I’m amazed that he carries himself with such humor. He constantly reminds me how much others have helped him get through the ordeal, how much he loves his family and his girlfriend, Zuleyma. Sean seems steadfastly optimistic.

I called Gail early this morning. She still had no idea how much help theCHIVE Fund was going to deliver. We started talking about Sean again. Through it all, Gail has never left her son’s side, “Sean… he’s a stong kid. He shouldn’t be alive, but here he is. Life is getting better.”

I asked Gail how the renovations were going?

“They’re going ok, John. I spoke with my husband last night and he’s hopeful we can finish the house in a month. If I’m honest the bills are more than we expected, it’s a little overwhelming but we’ll find a way for Sean.”

Gail handed the phone to Sean and asked if he wanted to say anything to the Chivers. He paused for a moment and just said, ‘Probably bulletproof.’

The poet C.C. Scott once said that the human spirit was stronger than anything that can happen to it. Sean Pesce’s spirit, it seems, proves the thesis.

Sean will return to his home in Connecticut an American Hero. We’re so glad we could play a part in his hero’s welcome. Once again, the Chivers who donate totheCHIVE Fund have made it all possible. theCHIVE Fund exists to support people in need of smaller generosities than the headline campaigns, as well as help underfunded campaigns meet their goals. We’re so proud to be a small part of all this. 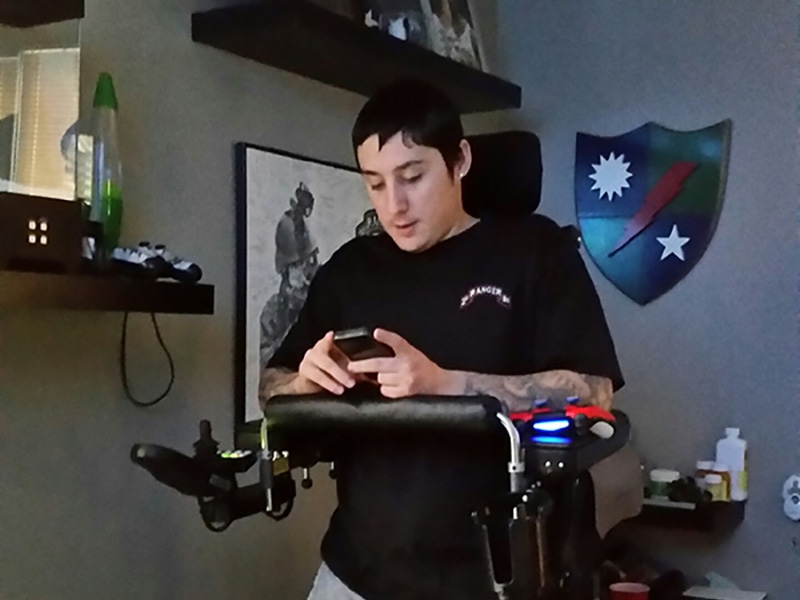 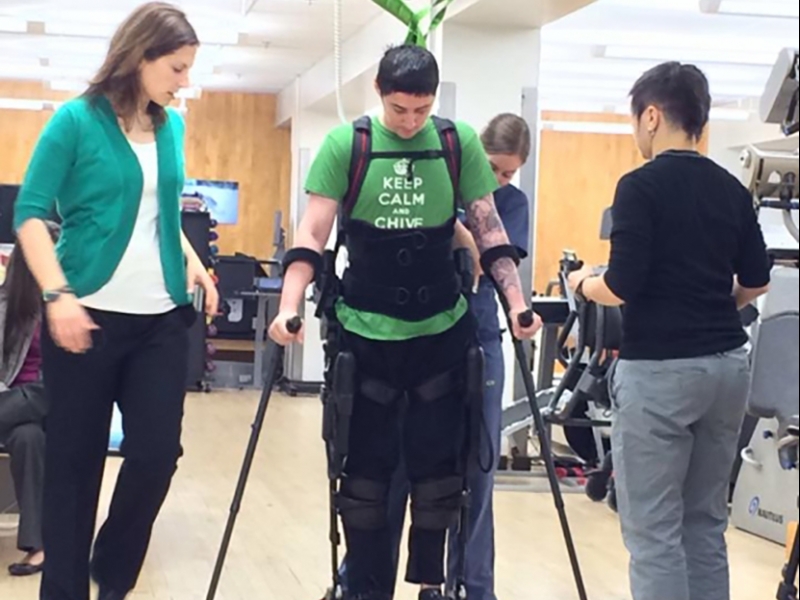 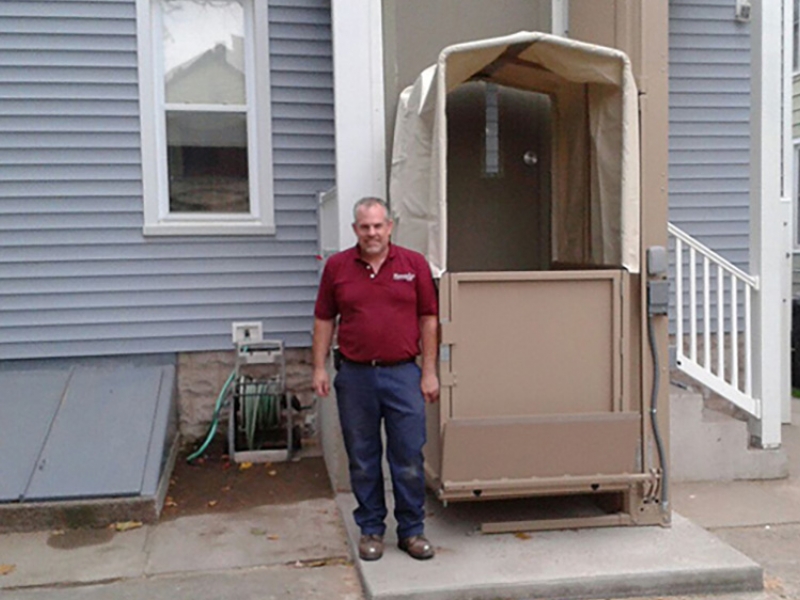