From Super Bowls to super dogs 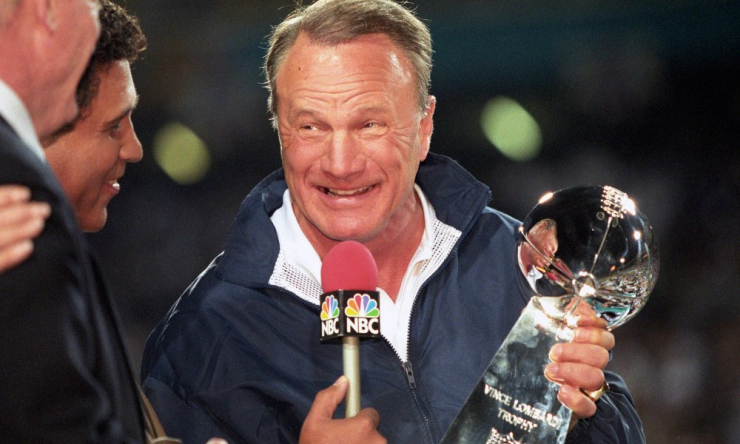 When Barry was handed the Lombardi Trophy, Barry hoisted it into the air and shouted, “We did it our way, baby!” There is only one way to describe that moment — Pure joy. 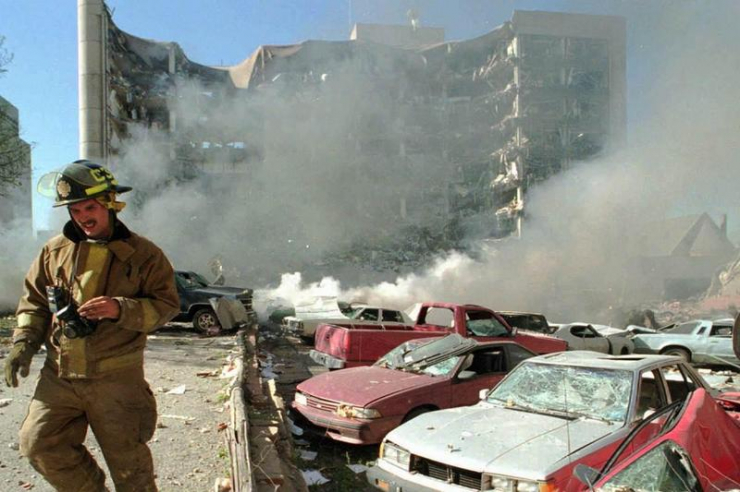 A very different emotion seized the entire nation months earlier, even before the Cowboys reported to training camp that season. On April 19th, 1995, a truck filled with explosives was detonated in front of the Alfred P. Murrah Federal Building in Oklahoma City. What ensued was pure chaos and one of the deadliest acts of domestic terrorism in United States history. 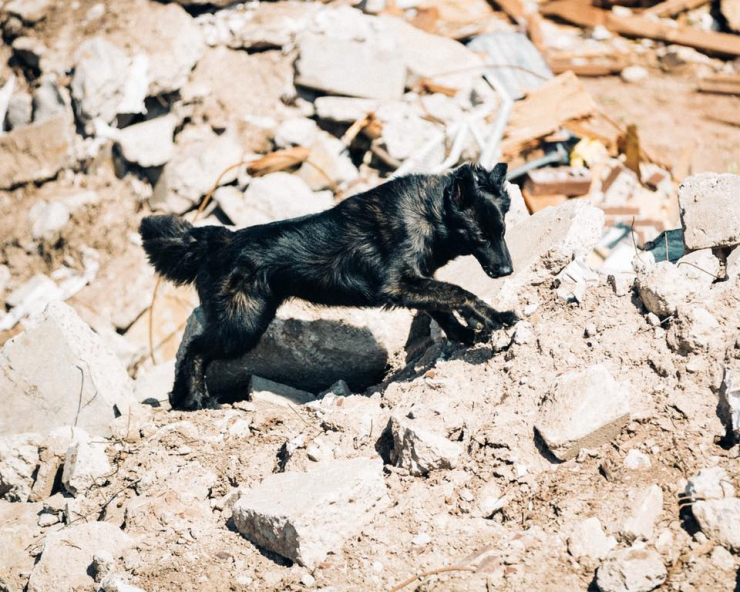 Shortly after, Becky Switzer received a call from her brother who was in Oklahoma City at the time: “You and Barry have to come down here and see these dogs from all over the nation helping search for victims.” Becky and Barry went and saw the devastation and sadness first-hand. But they also witnessed the incredible Search and Rescue (SAR) canine teams as they worked tirelessly for days to save every last person they possibly could. The seed of an idea began to form for the Switzers. 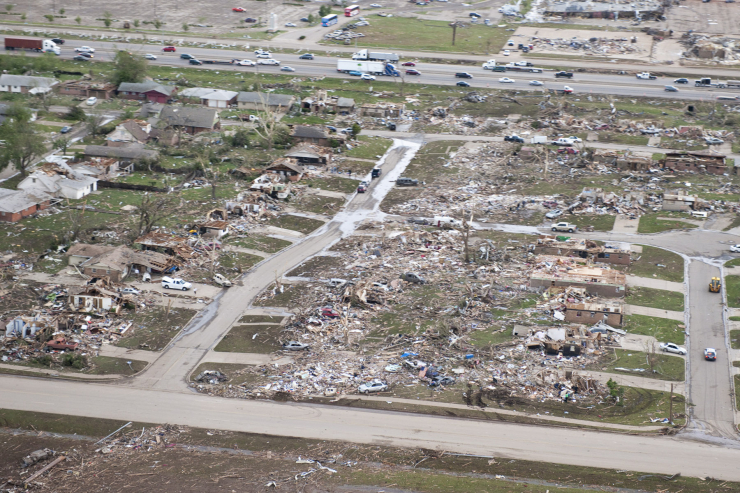 Years later, an EF5 tornado (the worst possible kind) ravaged Moore, Oklahoma and leveled entire neighborhoods. Becky and Barry saw people searching frantically to save individuals under endless rubble. Unfortunately, Oklahoma did not have any search and rescue dogs of their own at that time so it would take hours to clear a single house by hand. When a SAR dog arrived from Arizona, Becky witnessed a single canine and its handler do in minutes what it was taking dozens of individuals hours to accomplish. When another tornado ripped through the area trapping dozens of children under debris at school, Becky had seen enough. When minutes were the difference between life and death, why weren’t these incredibly talented dogs everywhere? It was time to take action and get SAR canines in Oklahoma. 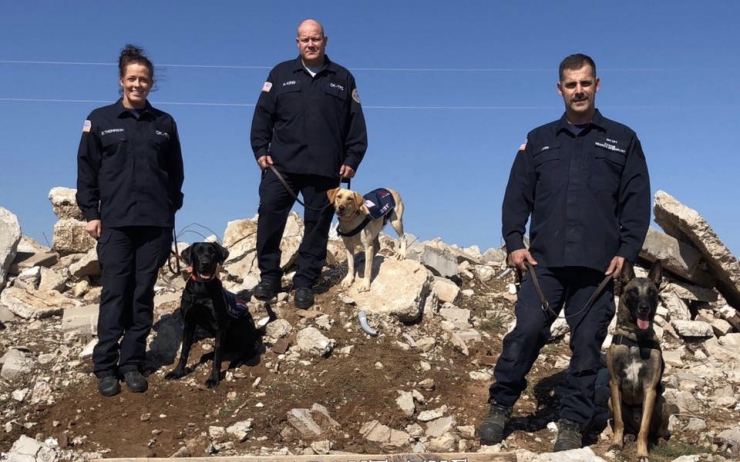 She started asking questions as to why there weren’t more dogs available everywhere for situations like these. It wasn’t that Oklahoma didn’t want Search and Rescue dogs, it was that each dog cost around $50,000 to train over the course of 18 months. There weren’t enough dogs available because there wasn’t enough allocated from state and/or local budgets to pay for expert trainers and facilities to train and nurture these special doggos.

Becky knew what she had to do. 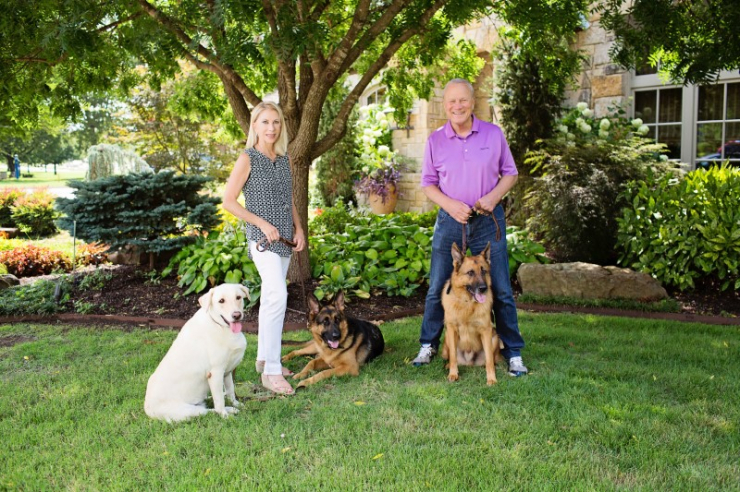 If cost was the barrier to entry to save lives when every minute mattered, the Switzers wanted to take that variable out of the equation. In 2017, Becky and Barry bought some land in Oklahoma and founded Ground Zero Emergency Training Center with the goal of strengthening emergency response at the local, state & national levels. With their concept, plot of land and nonprofit founded, the Switzers needed to put together their team of elite staff and experts, something Barry knew something about. 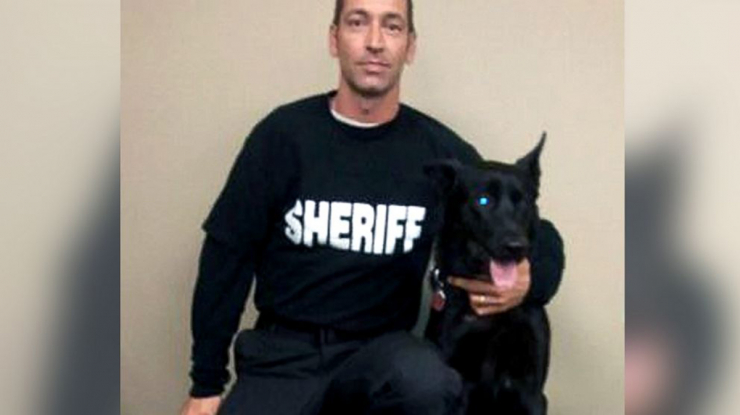 Not least of which was finding Lead Trainer and Program Director Todd Frazier, a former law enforcement officer who grew up around military dog training, and is Ground Zero’s resident “dog whisperer.” Next, they started to slowly bring in dogs for training. After all, champions are made, not born. 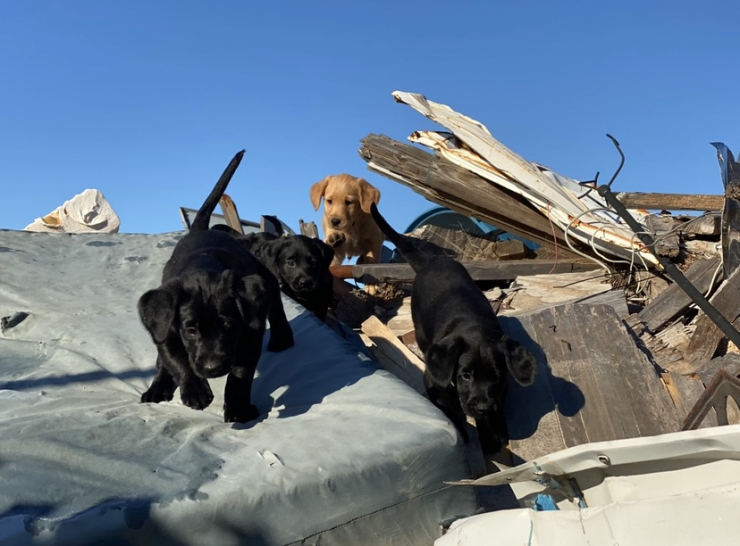 Saying the process is a delicate science would be an understatement. Ground Zero brings in dogs from as young as 3 days old. But not just any dog can become a Search and Rescue dog. The canines have to be highly motivated and focused. They become the elite of the elite, “the Heisman trophy winners of dogs,” as Coach Barry likes to put it. They need to be able to run through smoke, broken glass, wire, and rusty nails as well as tune out distractions like loud noises and explosions. It’s extremely hard work and is certainly not for the faint of doggy heart. 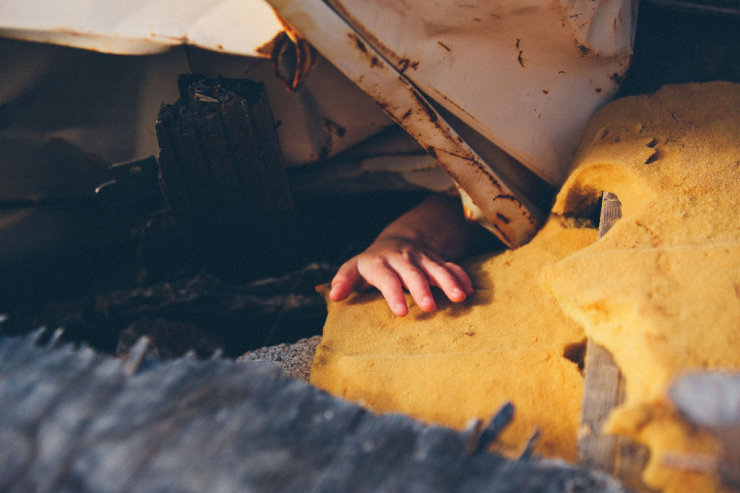 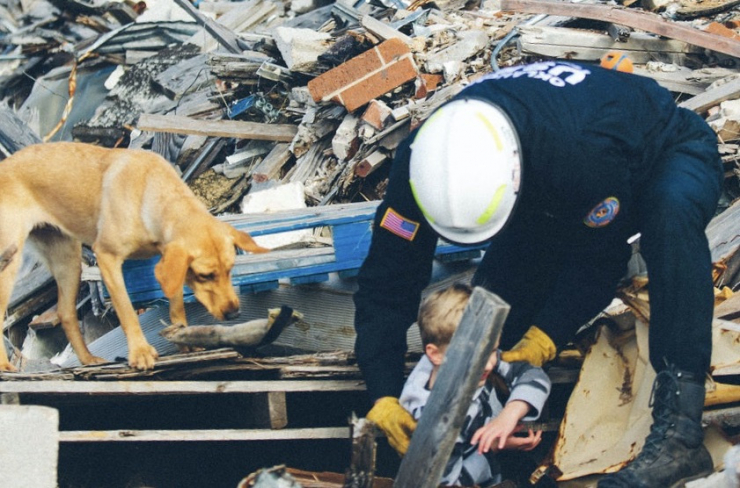 It takes 18 months of intensive canine training in urban rescue, wilderness, scent trailing, and water rescue and recovery. The Ground Zero facility, including a rubble pile that could pass for any natural or man-made disaster site, is the perfect place for training these unique dogs. “Disco balls, loud music, flash lights, kittens, and fog machines,” Terri Jungels, executive director of Ground Zero listed some of the tools they use to test against distractions. “We need to find the hiccups because if we’re searching for a little girl in a pile of rubble, every second counts and we can’t get distracted.” 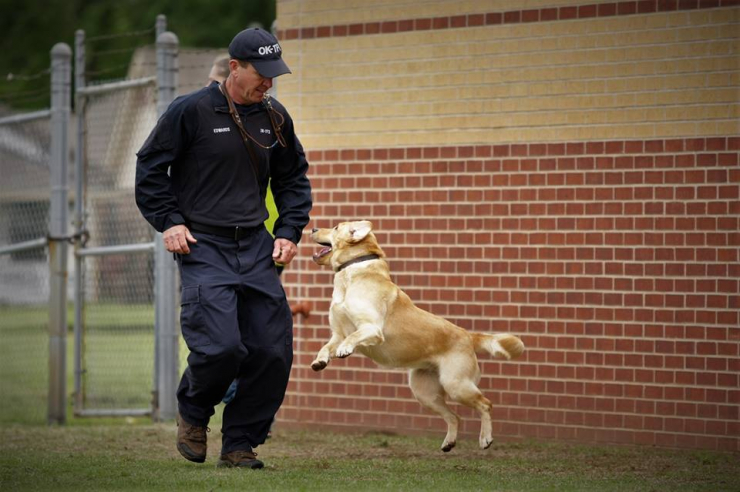 The dogs certainly don’t do it alone, though. It truly takes a coordinated team effort between the dog, the Ground Zero staff, and eventually the dog’s handler. However, it takes nearly a year and a half and over 2,000 hours of intense training before these dogs are even paired with a potential task force or rescue team handler. And much like any Super Bowl winning team, the dog and the handler have to have natural chemistry and an unbreakable bond. 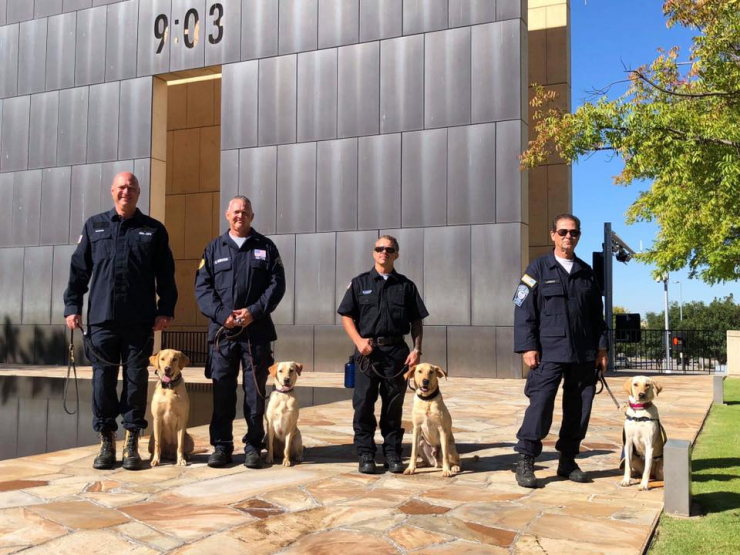 Finally, the Ground Zero dogs are ready to receive their search and rescue doctorates. What follows is the ceremonial passing of the leash in which each person that had a hand in training the dog passes him/her down the line until the newly certified search and rescue dog is passed off to his handler. It’s an emotional experience that none of the Ground Zero members could talk about without getting choked up on our call with them. It’s like they are passing off children they’ve raised for nearly two years, knowing that each dog will go on to save lives and do incredible things.

For each graduating dog, it’s been a long road and like any elite training program, only a small percentage of dogs make it through. For the rest, Ground Zero finds appropriate placements more suited to their personalities like stepping down to narcotics or becoming therapy dogs. 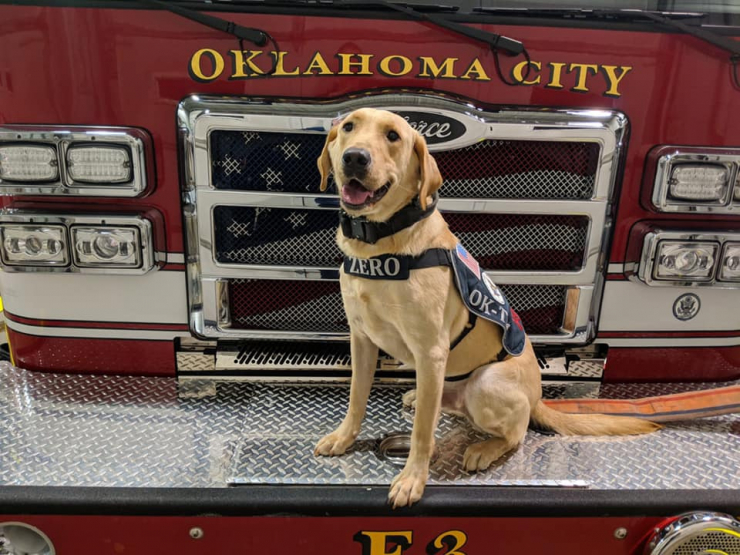 So what can these amazing dogs do once fully trained? Their results are truly remarkable. A Ground Zero dog was able to locate a man that had been missing in southern Oklahoma for nearly 30 days in less than 30 seconds. A few weeks ago, a Ground Zero dog found a missing family member with mental health issues who had wandered off on her own within a 12 mile area. They are especially adept at finding unconscious humans buried under a house struck by a tornado in less than a minute, a process that could take first responders hours or days on their own. 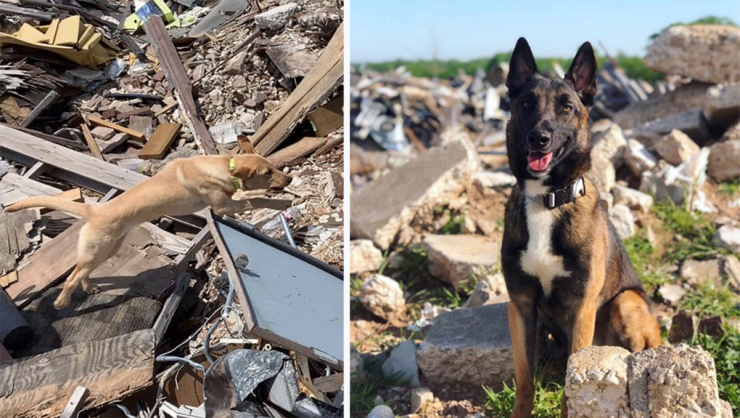 How exactly does the magic work? Terri put it simply. “For you and I, we might smell a cake cooking and say, ‘Yum, that smells like chocolate cake.’ For a Ground Zero Dog, they smell the individual ingredients like yeast, flour, butter, sugar, and eggs. But by process of elimination, they go, ‘Oh wait, the eggs are missing — where are those eggs? I need to go find those eggs!’ That’s how they can find people under dozens of feet of rubble.”

No technological device exists that can come close to a dog’s nose.

And much like Barry when he hoisted that Super Bowl Trophy all those years ago, a SAR dog’s joy at finding a victim amidst the chaos is unmistakable. 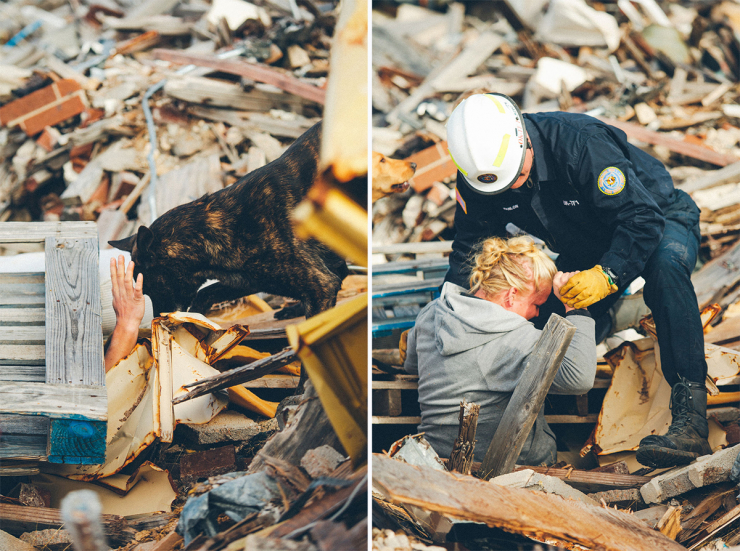 Through their holistic approach that includes ongoing training, first response team and disaster training, Ground Zero has been built into the nation’s premier Search And Rescue dog training program. An average SAR program turns out 5-6 SAR dogs per year. Ground Zero has been able to achieve nearly double that number, placing more SAR canines (33) than any other program in the country since its inception.

What's even more amazing is the fact that Ground Zero does all of this with zero cost to the State and Local task force teams that so desperately need their canines. That doesn’t mean the training costs are any less for Ground Zero, though. Like Becky and Coach Barry set off to do years ago, Ground Zero is fulfilling a huge gap for first responders and disaster response. However, 2020 has been tough on Ground Zero. The pandemic has led to a loss of funding during a time when SAR canines are needed more than ever. 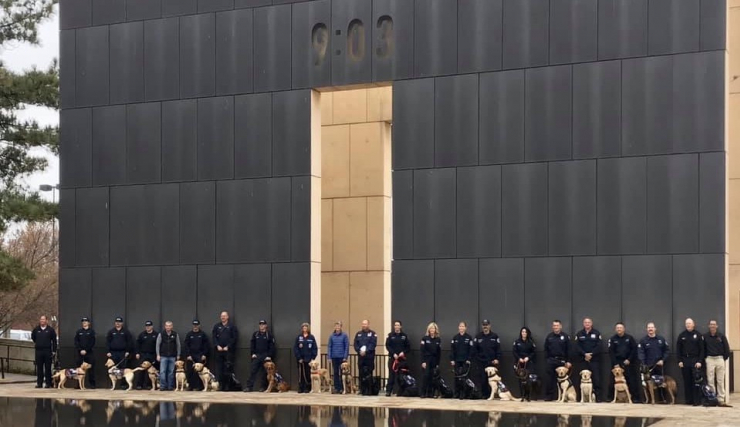 When the OK Chive chapter brought Ground Zero to our attention, the fit seemed as natural as a SAR dog with its handler. Filling in the gaps and coming to the rescue is something our team here at Chive Charities and theCHIVE community have always championed without a second thought. That’s why we’re stepping in with a $10,000 grant from our monthly donors to help Ground Zero continue its mission to train and place these incredible dogs in the areas they’re needed most. The grant couldn’t come at a better time.

It’s incredible what a well-coordinated team can accomplish. They can win super bowls, they can save lives, and they can also help make the world at least 10 percent happier. Our team of committed donors is helping us change the lives of the underdogs everywhere. Become a part of our team and sign up for a monthly donation at any level (from $5 to $200) and join the rescue squad that is Chive Charities right HERE.

You can learn more about Ground Zero and its mission HERE.