It’s a funny thing about Hodgkins Lymphoma. The first time you’re diagnosed the odds of beating it are solid, 80% – 90%. But if you relapse, the scale begins to tip quickly in the other direction. Relapse treatments are much more aggressive.

Around Christmas of 2009, Melissa relapsed. Her new fight included aggressive chemo, high-dose radiation, and stem cell transplants. Melissa told me “I lost my hair in just 13 days. I tried so hard to fight but it took a toll so quickly. I had several catheters put in my arm and neck to make the chemo easier on my veins. I was in so much pain.” And the pain was just beginning.

Next came the bone marrow transplant at Johns Hopkins, which wiped our her immune system so hard Melissa didn’t leave her bed during the summer of 2010. Then at the end of the summer her white blood cell count was just enough to begin 28 days of radiation which burned her skin from her neck to the bottom of her rib cage. The treatments were so intrusive Melissa had trouble speaking. She didn’t have the energy to make words. “For a while I just spoke gibberish.”

On November 3rd 2010 Melissa beat cancer for the second time. “It was the greatest day, I went home, put on my wig, some fake eye lashes, filled in my eye brows with a pen, and went out with my friends. I got to have a beer. I was on cloud 9.”

But in February 2012 Melissa’s foot fell asleep. And it wouldn’t wake back up. She also felt a tingling traveling up her left side. “I tried to hide it. I didn’t want to make my family afraid.” Melissa’s sister Stephanie recalls: “I was walking with (Melissa) one day and suddenly she tripped and fell down for no reason. I remember she looked up at me and said, ‘I…I don’t think I should drive home.’”

A few days later, her right leg went numb. Four spinal taps revealed nothing. But an MRI proved Melissa had something called Transverse Myelitis. She’d never heard of it but was told it was an extremely rare neurological disease in which your immune system attacks your spinal cord. In very rare cases it can be triggered by high doses of chemotherapy, a malicious side effect of the treatment that was meant to save her.

Within 3 weeks, Melissa was entirely paralyzed from the waist down.

And with that, Melissa went home. Aside from physical therapy little could be done. ” You’re just paralyzed now and you go home.”

Home was an apartment on the 3rd story with no elevator. It was the same apartment she’d lived in for a year but it suddenly became Melissa’s prison. “I was totally trapped. I could only get up or down if somebody carried me. I felt bad asking friends and family to help me. I’d only do it for my physical therapy sessions. I didn’t want to be a burden. Sometimes I would sit outside my apartment for hours, hoping somebody might carry me up.”

Melissa’s mother would become her caretaker, bathing and feeding her. Her family helped however they could, working long hours to assuage the massive medical bills. Insurance denied Melissa a standing frame and a functional electrical stimulation (FES) bike and allowed her only 30 physical therapy visits/year. Melissa was kicked out of nursing school due to limited mobility.

A cold and silent January descended on Melissa’s 3rd story apartment. Now only a spectator to life outside her window, Melissa sank into deep depression.

On March 4th, 2013 Melissa’s sister, Stephanie submitted an application to Chive Charities on behalf of her sister. We receive hundreds of applications every week but something about her application caught our eye. On the application there is available space to ‘explain a little more about your cause’ if you feel inclined.

Stephanie filled the two-paragraph space and then attached a 4 page single-spaced paper about how much she loved her sister. She talked about all the fundraisers they’d held, how much the Annapolis community loved Melissa. At the time Stephanie was only asking us to install hand controls in Melissa’s car so she could be mobile again. She told us that, even if we couldn’t give money, how much a card would be appreciated. If all else failed, Stephanie just wanted to see her sister smile again, even just for a moment. One local fundraiser was even called “Make Melissa Smile.”

Two weeks ago, Melissa was told her paralysis was irreversible. She would never walk again. To add insult to serious injury she was back in the hospital with a UT infection that had spread to her intestines. Melissa spent most of September back in the hospital.

What Melissa didn’t know was that theCHIVE Fund was going to make a significant donation – $50,000.

But more than the money, all of us at Chive Charities wanted to give her a hug. This girl hadn’t received an ounce of good news in years and we wanted to deliver the good news in person. We wanted to bring all her friends and family together too – to let Melissa know how much she’s loved. We all wanted to see Melissa smile.

We got plane tickets to Annapolis to surprise Melissa and arranged a surprise party for her at her favorite restaurant. We invited all her close friends and family….

Describing the exhilaration of that moment isn’t possible. I’ll defer to the photos below.

When I finally got to speak to Melissa about how life was treating her, she had finally moved out of her 3rd story prison to a ground-level apartment. Sadly, the new digs were not modified for somebody in a wheelchair. She couldn’t reach anything in the place from the refrigerator to the stove. I asked her what she really wanted. She replied “John, I fantasize about being able to just cook some Easy Mac.”

I asked her seriously. “My dream is to walk again. I’m not giving up on that. But I have this recurring dream that I bought a home and all my loved ones, my friends, family, and Chivers came from all over to help me renovate it. I miss having things I need at eye level. I miss my independence. I don’t want to have to rely on others anymore.”

It dawned on me halfway through our conversation that $50,000 would be amazing patchwork for Melissa, but nothing more. I felt like I had come to duct tape her life together for a couple years. And then what? What would become of her? We were going to need the Chivers’ help for this.

Melissa beat cancer twice only to be paralyzed from the waist down as a side effect of the medicine used to cure it. If you’re thinking that sounds cruel and unfair, that’s because it is. It’s enough to break anybody’s spirit. And this has taken a toll on Melissa. She told me, “I’m trying to have more faith and less fear. But it’s hard…it’s hard where I am now.”

But the girl I found in a small restaurant in Annapolis is still smiling despite the pain, still clinging to hope, still believing that someone somewhere will help. Help is here now. 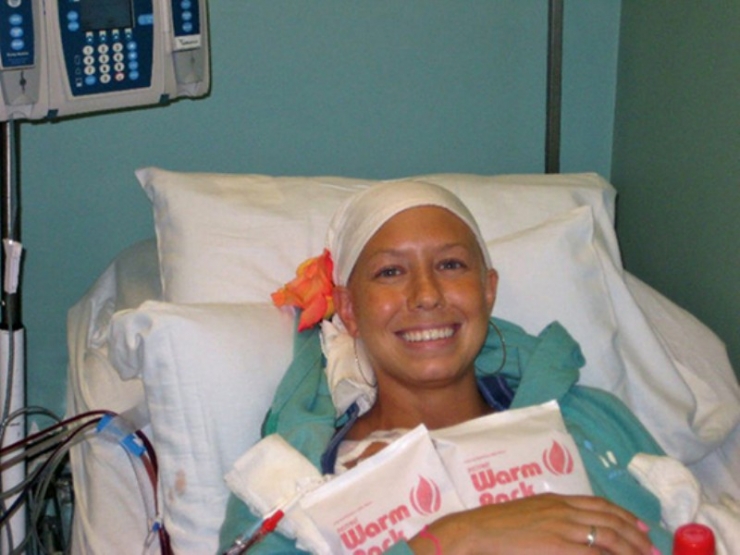 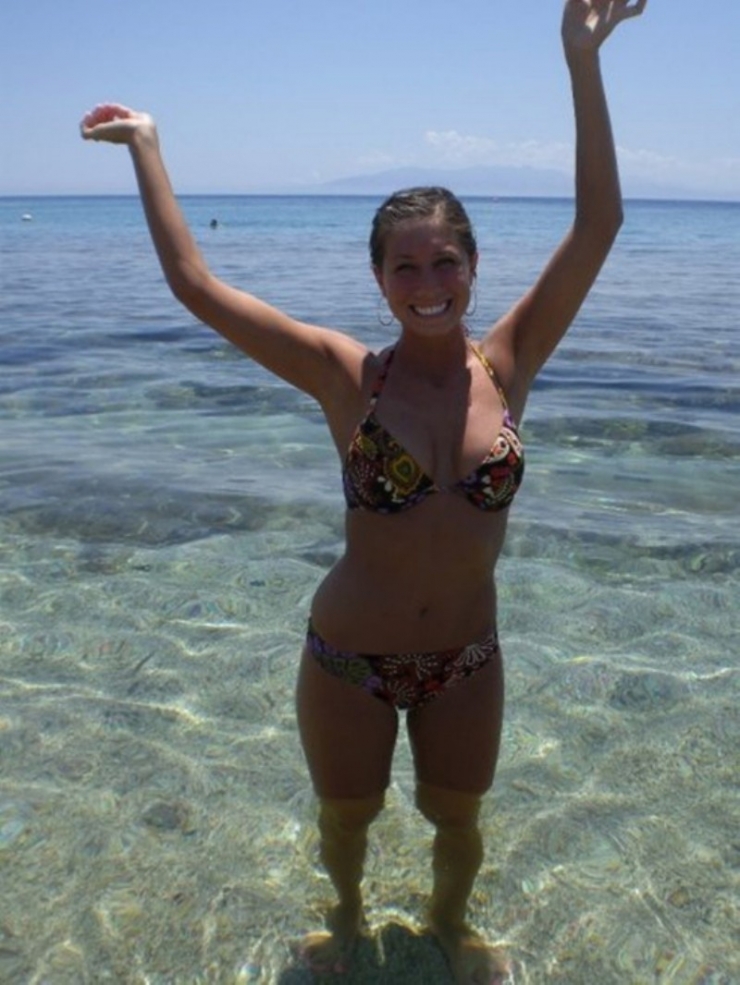 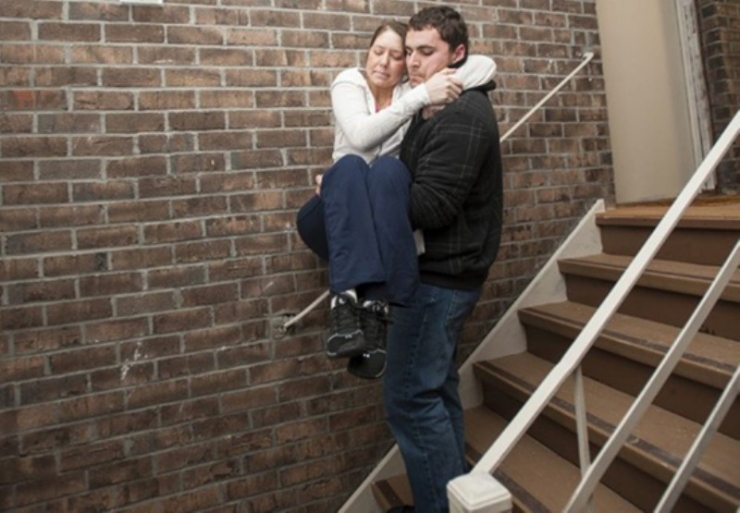 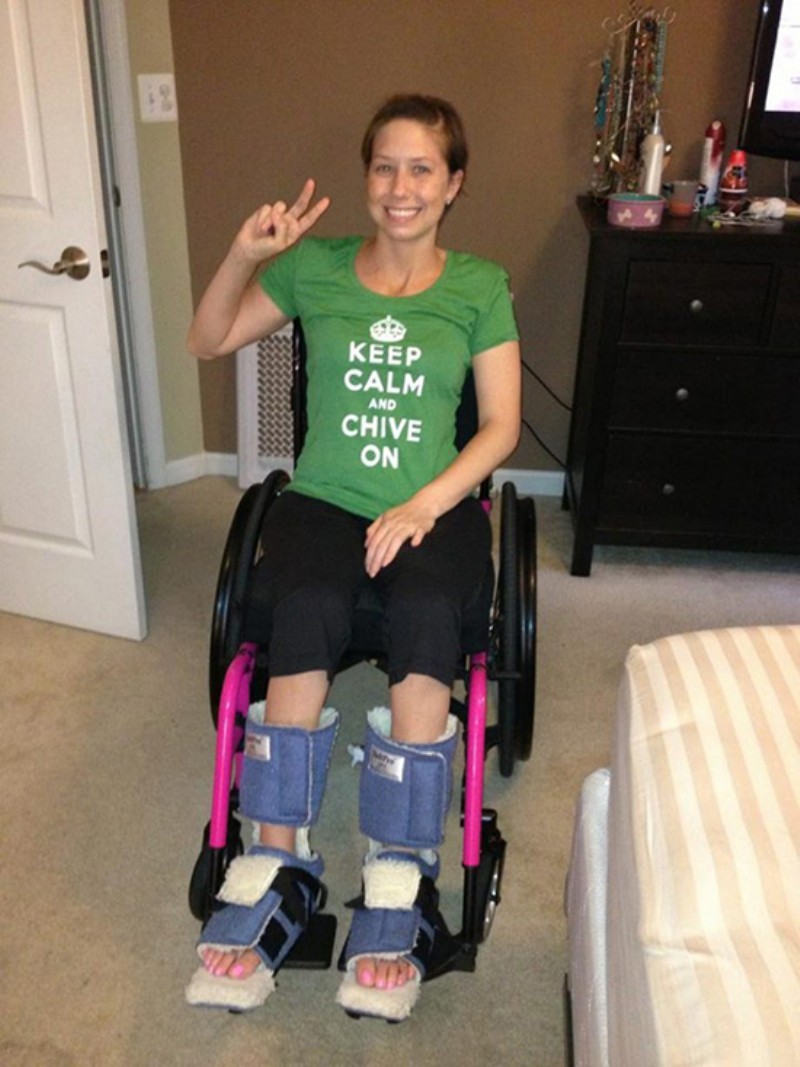 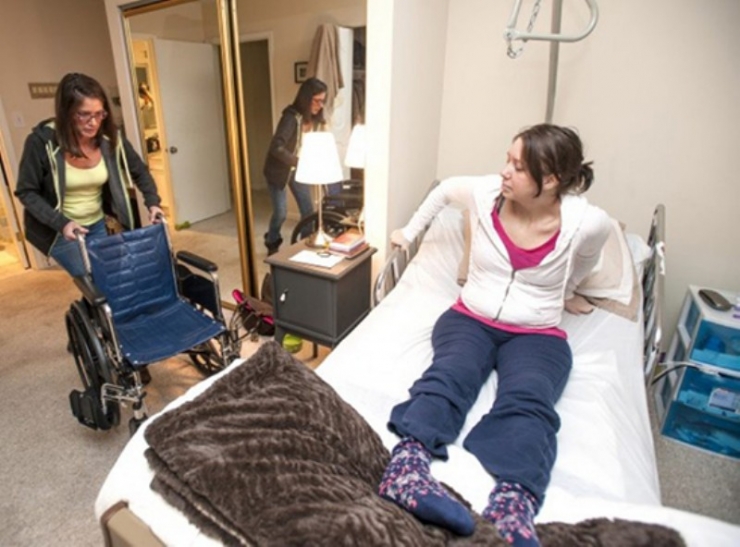 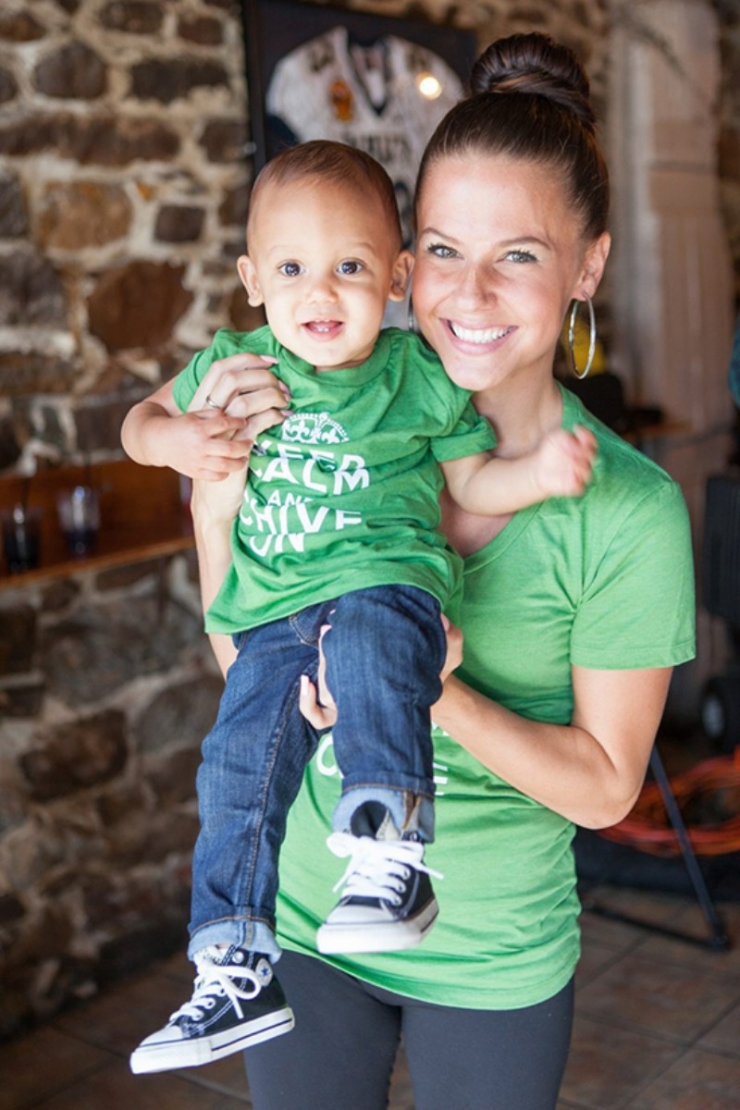 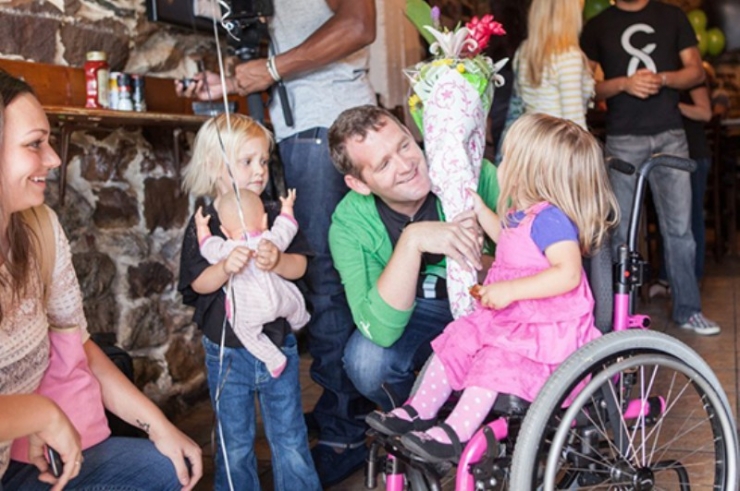 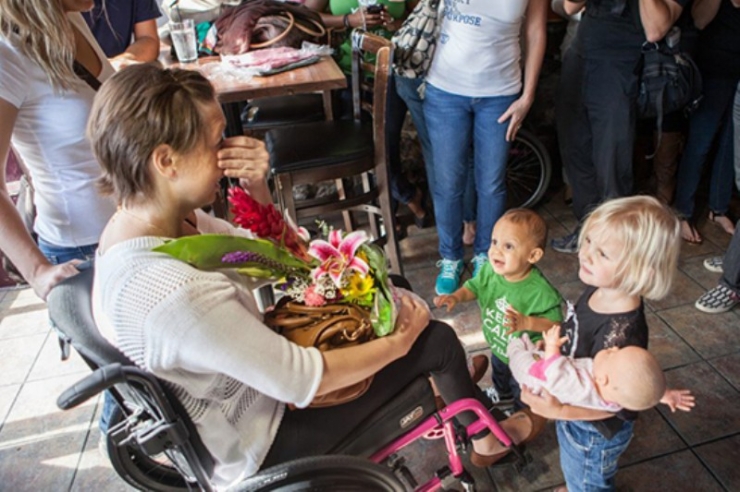 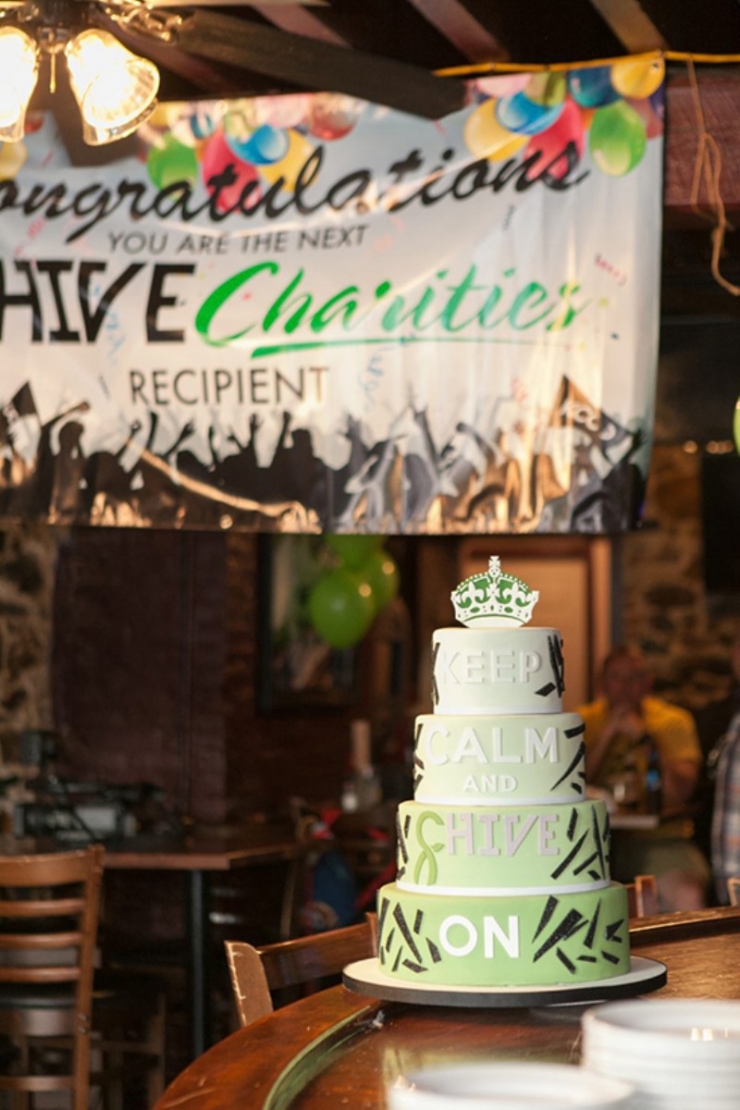 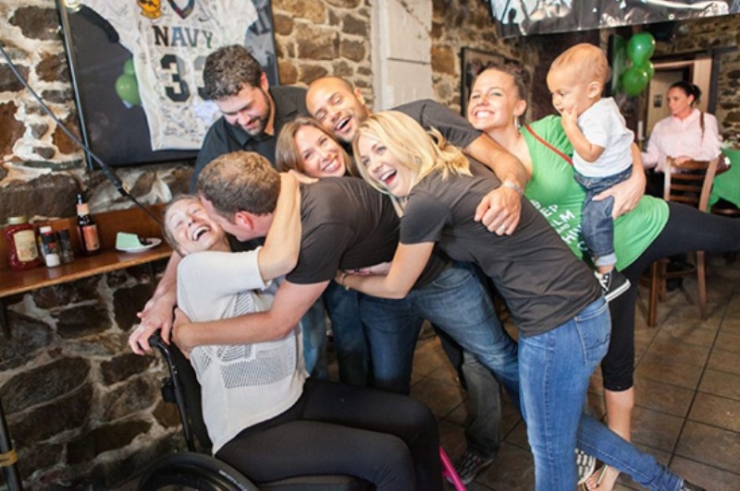 Every day I think of meeting Melissa. I can’t help but think of a girl, newly paralyzed, stranded on the 3rd story of her apartment, watching the seasons change outside her window as the world passes by. I can’t imagine how lonely that must have been.

And as the threads unraveled on the last of her hope, exposing a raw and fragile soul, Melissa braces herself for another blow. As the fist bears down again, we can all rise up to stop it. No more, this girl’s had enough. The cavalry has arrived.

Melissa remembers dates more accurately than the average person. I noticed that speaking to her. Cancer treatment schedules will do that. Marking the time is a part of her now. Today is October 9th, 2013. It’s will be the day Melissa’s life changes forever. How much it changes will be dictated now by millions of Chivers across the country. 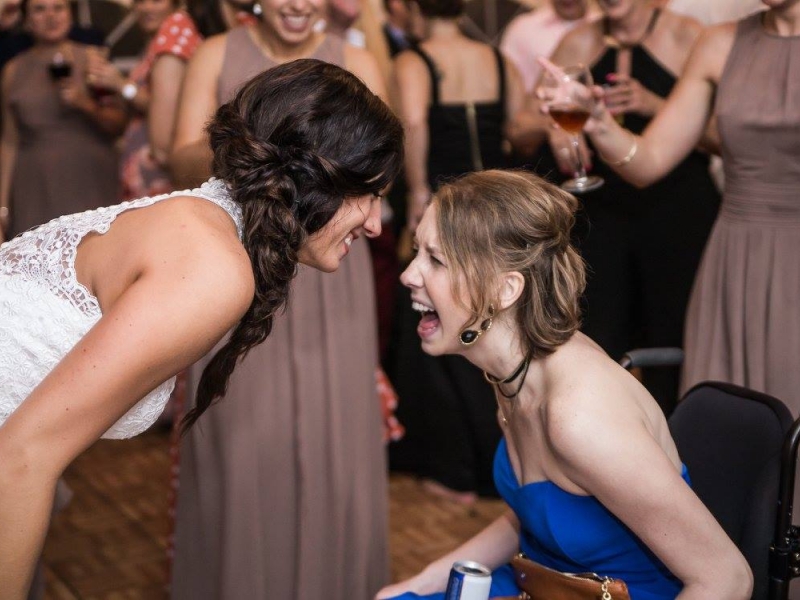 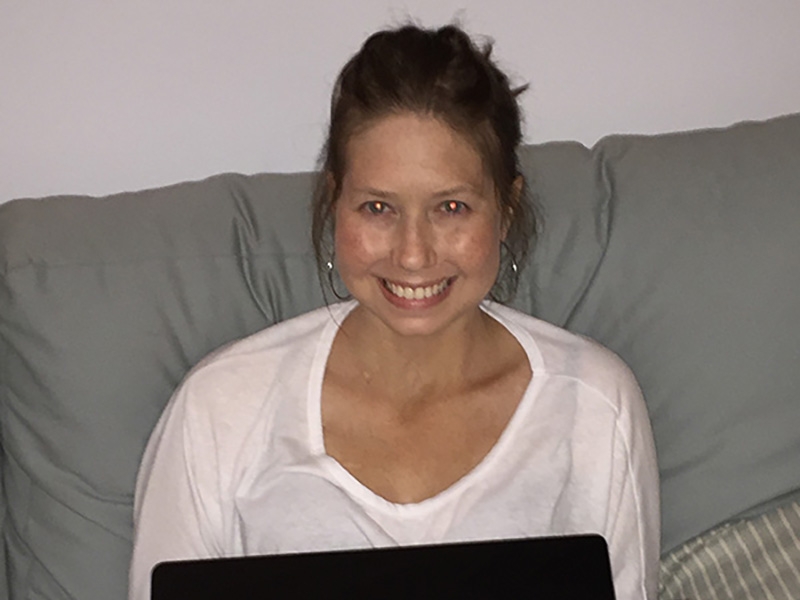 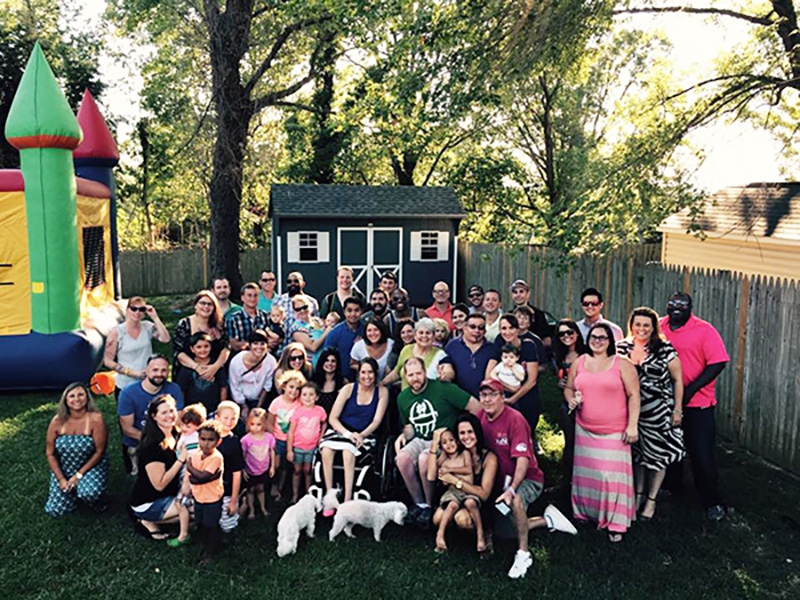