The next day Zack starts offering rides on to the other kids on the back of his wheelchair. The kids love it, they love being around Zack. He’s finally playing just like any other kid at recess. And that’s all he wanted.

When the kids at school ask what’s wrong with him he says, “My muscles are sick.” Just 5 years old now, he accepts the truth of the words with absolute simplicity. His muscles are sick; nothing more - and that’s ok with him.

But Zack’s muscles are very sick. Even worse, nobody knows what is making them sick. After breaking his leg in 2012, Zack’s mother noticed he still walked with a limp long after his cast came off. The orthopedic surgeon took X-rays but they came back negative. The limp persisted, and the search for answers began.

An MRI revealed that his sensory nerves are developing well but his motor nerves are dying. His cerebellum (the part of the brain that controls motor skills) is losing mass. His mother Jessicah explained, “Your cerebellum is supposed to look like a bunch of fat, little thumbs crowded together. His looks like long, skinny fingers spread apart.” There are very few diseases that affect ONLY motor nerves. – All are quite nasty and have been summarily ruled out by some of the best doctors in the country.

To the best of anybody’s knowledge, Zack has a genetic disorder that falls under the neuromuscular classification. His muscles are deteriorating at a shockingly rapid pace. His legs weakened and leg braces were no longer enough to support him. It wasn’t long until he was confined to a wheelchair and the Zinks scrambled to retrofit their old family minivan to accommodate Zack’s new wheelchair. The mysterious disorder quickly spread to his shoulders and neck, then to his eyes, esophagus, and jaw. The act of chewing is exhausting but Zack’s mom insists he take a few bites to “enjoy the small pleasure of food” before feeding exclusively from his G-tube.

Zack’s muscles are failing him a little more everyday. Zack can barely raise his hands above his head anymore. His lungs are not strong enough to cough. Each morning he wakes up to a cough-assisting machine that shoots air directly into his lungs then quickly sucks it out, essentially coughing for him.

On April 4th of this year, on Jessicah’s birthday, the Zink family received devastating news. Their doctor told Jessicah and his stepfather Cliff that Zack was terminal with no treatment plan. The likely scenario will be that Zack will catch a cold or flu, anything that will produce more secretions than usual, then the fluid buildup in his weakened lungs will turn into pneumonia, and he will pass away. Nobody wants to give a timeline but, when compared to similar neuromuscular disorders, December or January seems likely. The family was told to “Expect a harsh winter.”

Jessicah and Cliff were despondent. How had this happened? What should they do? Pull him from school and isolate him? I asked Jessicah what that was like.

“Zack is still in school and he could get sick, but I can’t isolate him from his friends. I want him to experience everything he can, right down to enjoying the taste of his food. He’s still cognitively a normal 5 year-old. And I don’t know about you, John, but I still believe in miracles. What if I pull him out of school and he makes it through this only to be stuck at a kindergarten level cognitively and emotionally? I won’t do it. He may be dying but he deserves to experience social joys.” 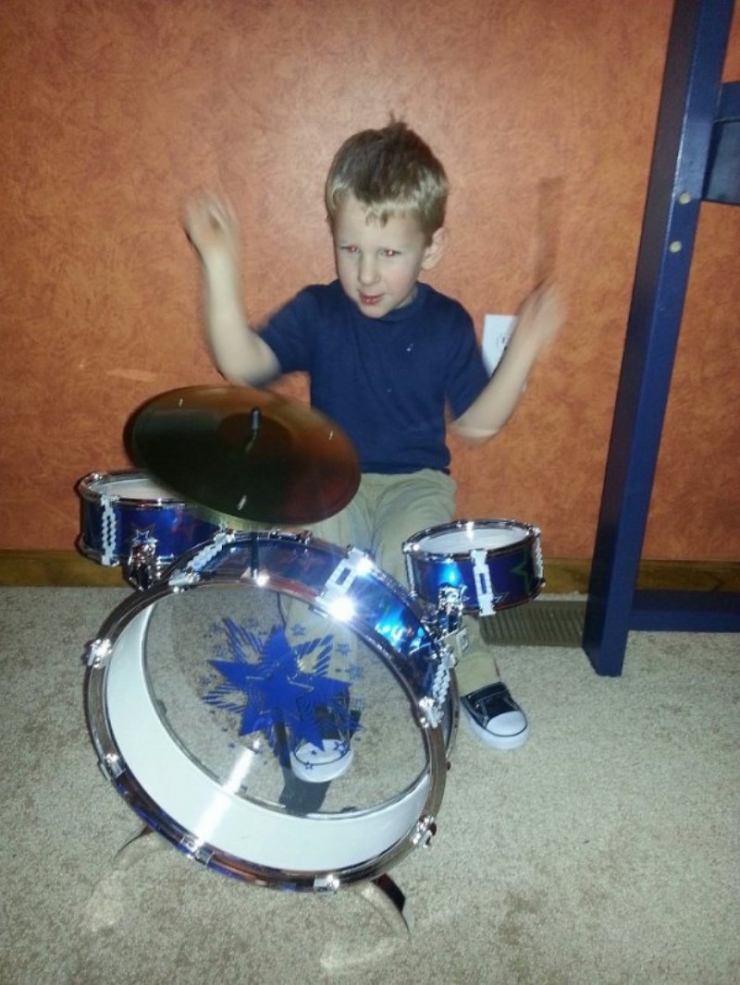 One year ago, Zack was a happy healthy boy. He loved playing the drums. 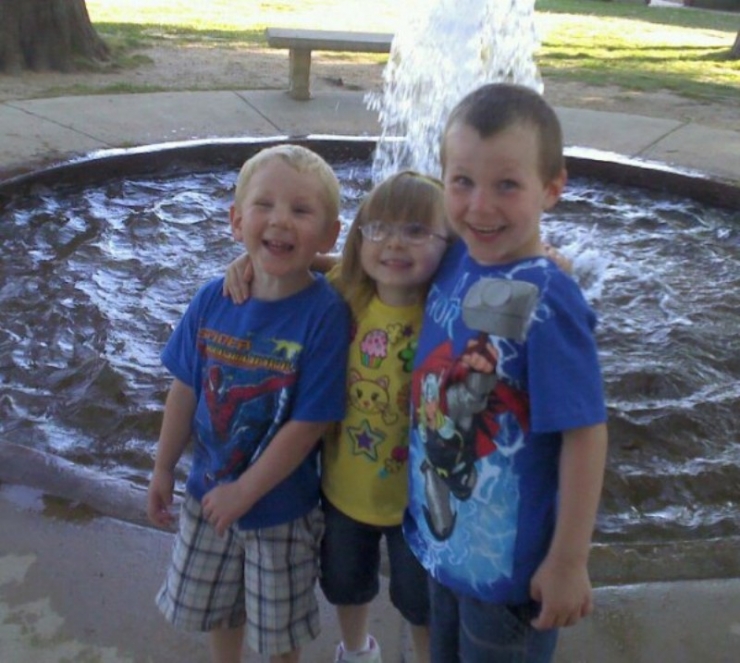 Zack with his older brother and sister, Owen and Keelie. 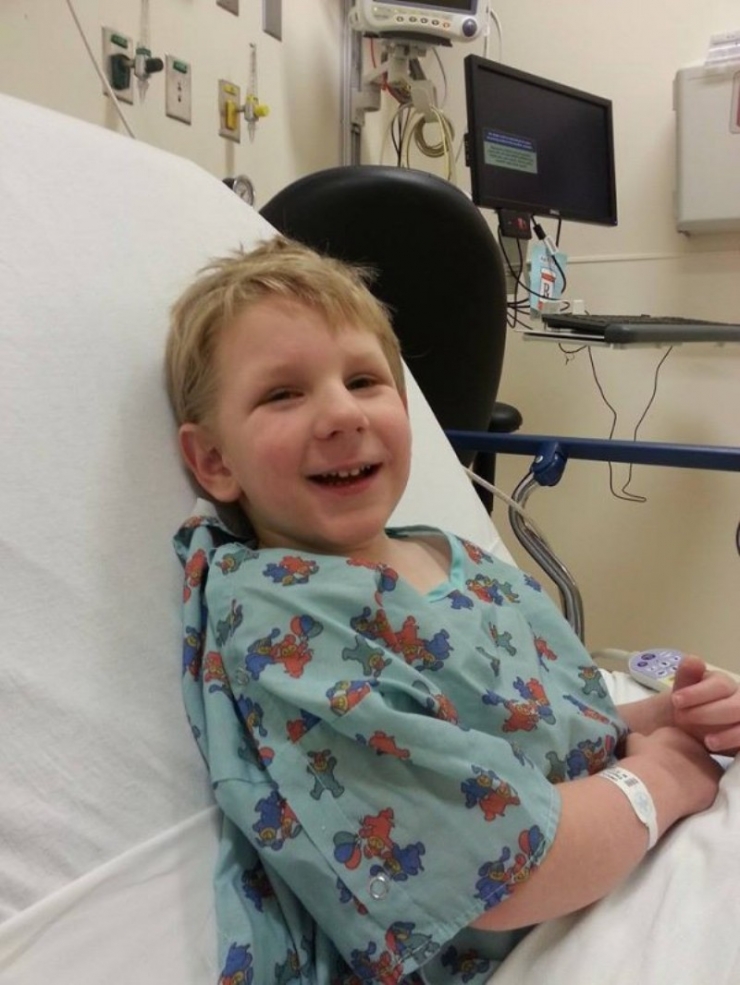 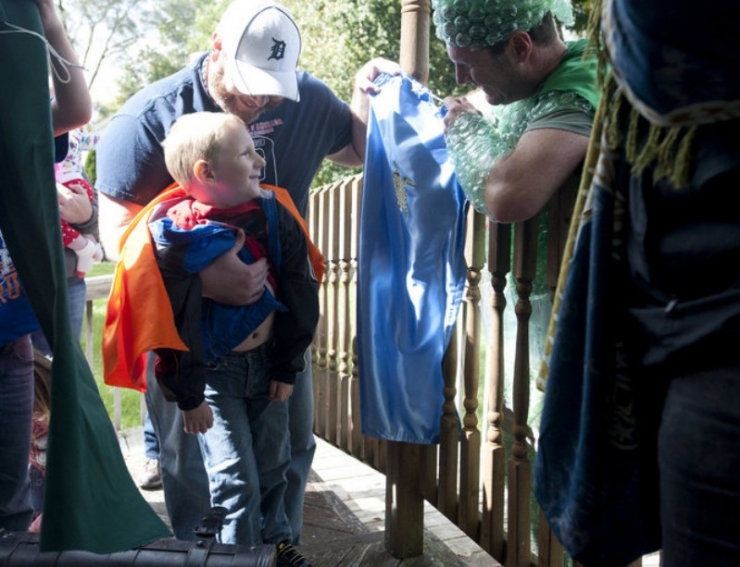 The Superhero Training Academy in Detroit heard about Zack and created a superhero adventure for him. After his youngest sister Ainzley was ’stolen’ by Dr. Mindbender, Zack trained to become Brave Turtle, facing off against the evil villain and saving his baby sister from the clutches of evil. 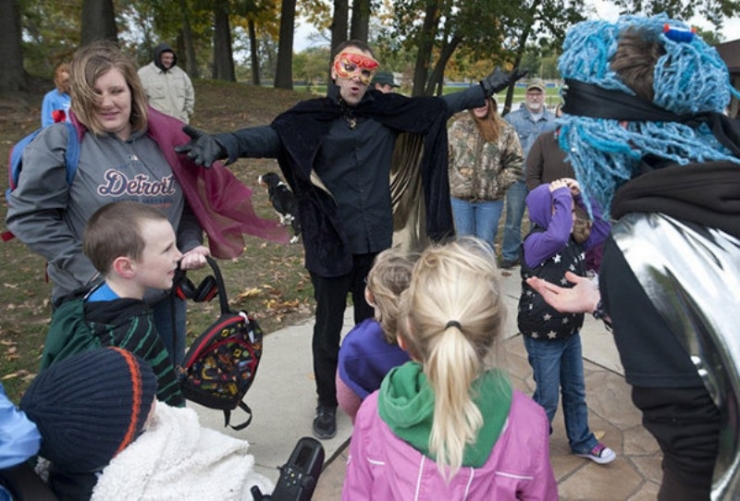 Zack passed a series of superhero challenges along the way... 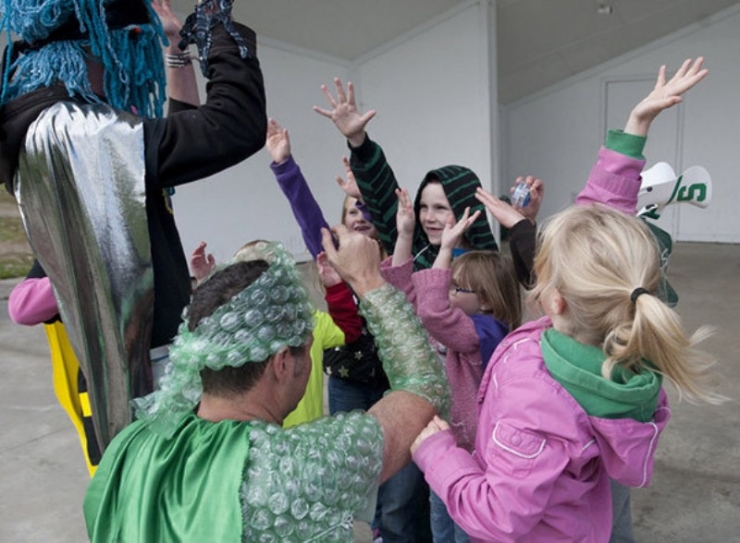 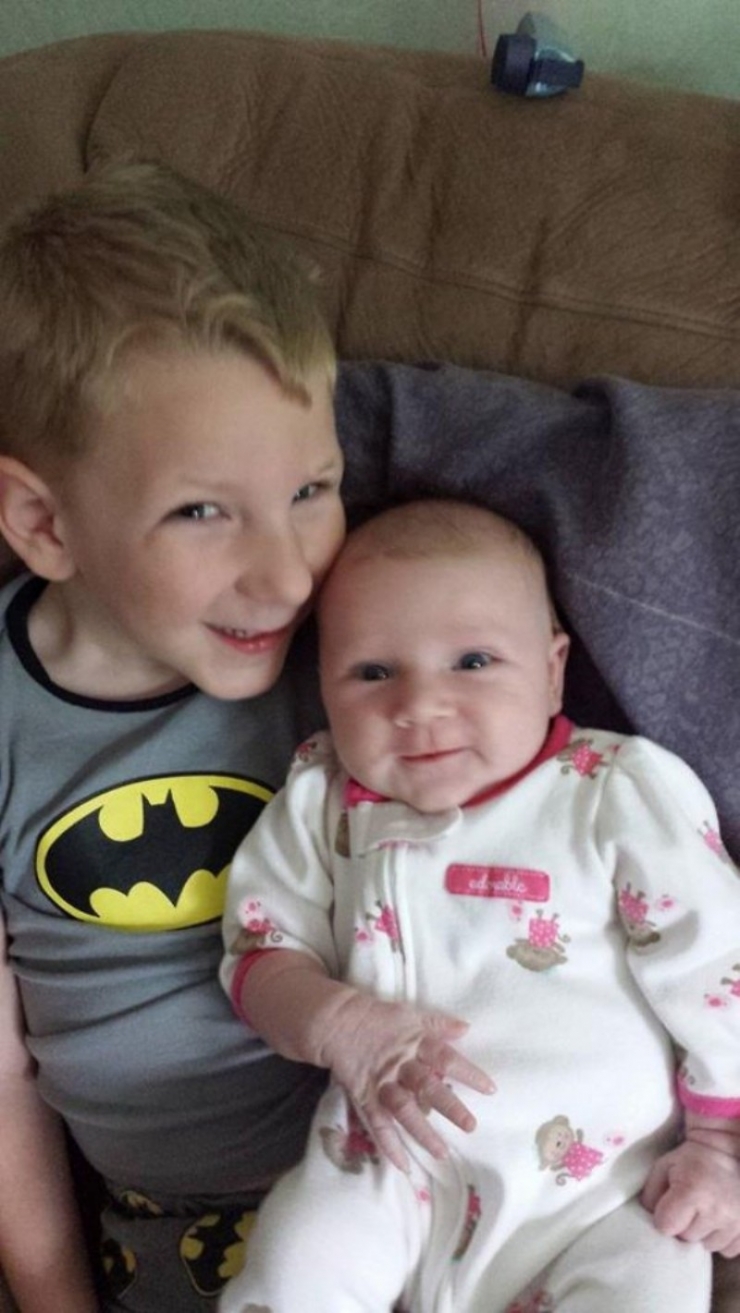 His sister Ainzley is only an infant and the family wanted her to have a cherished memory of her brother Zack – a video she can watch as a reminder that her brother was her hero once upon a time. 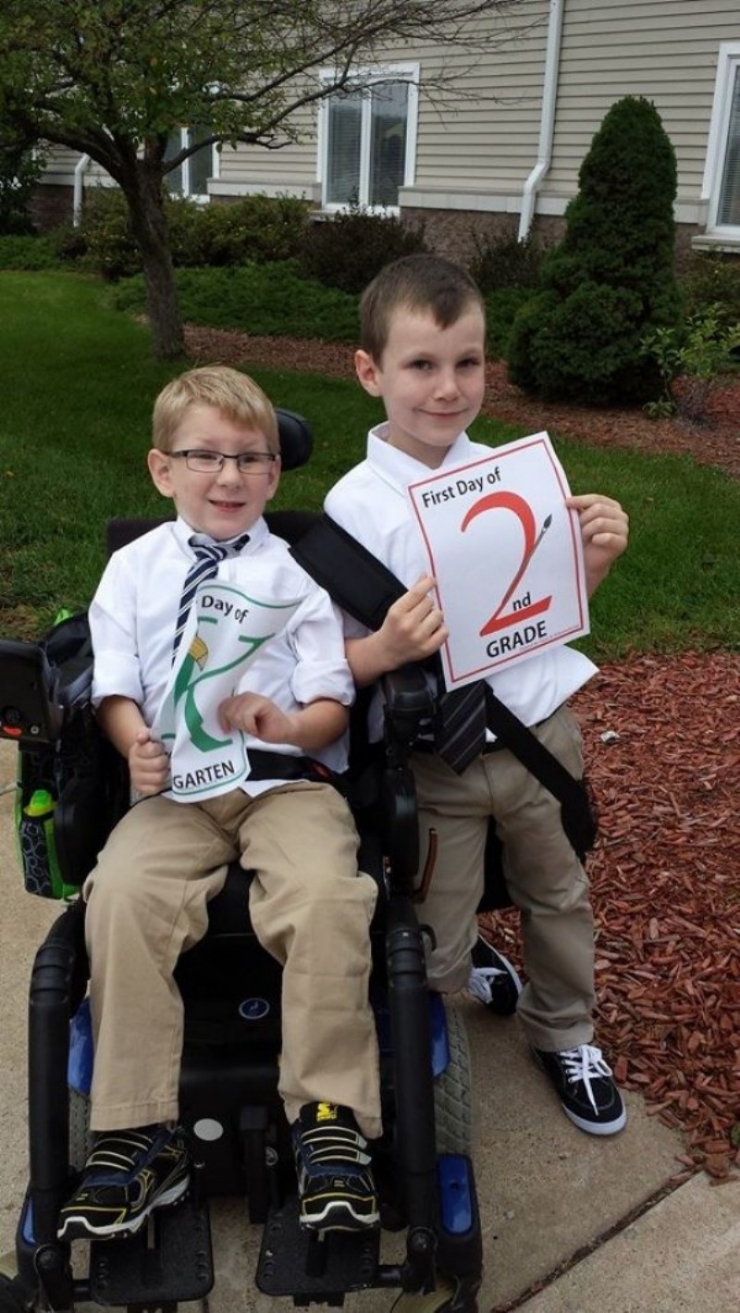 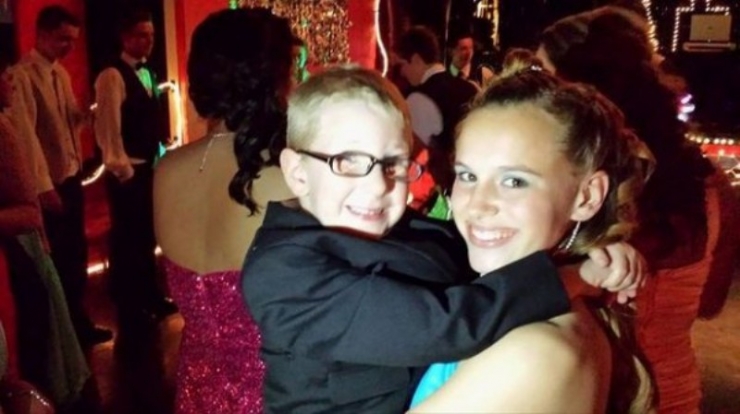 In May, Zack was invited to Concord High’s prom by his cousin’s friend Keyonia. She showed up at the family’s house with balloons and a poster asking him to prom, “He blushed, it was so cute. And shook his head.” 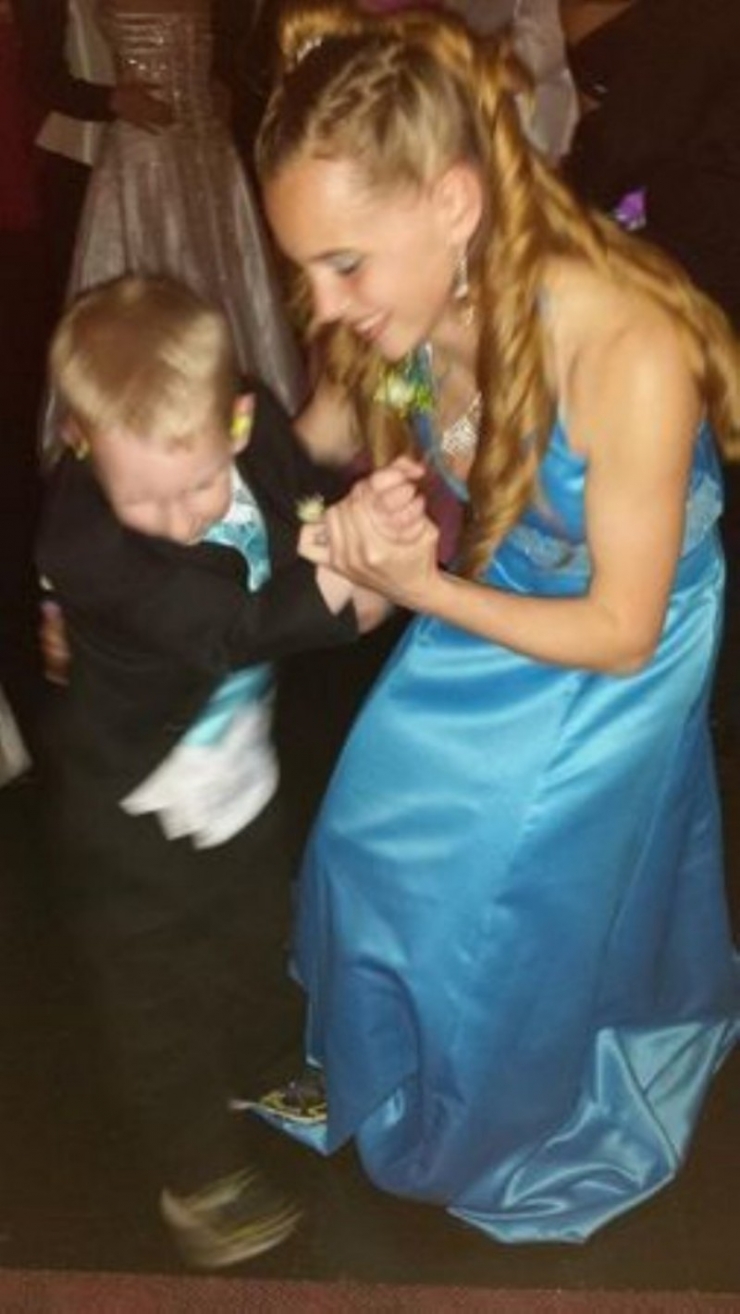 Zack’s mother recalled, “Everyday Zack would wake up and ask, “Is today the day I’m going to prom?”

When the day finally arrived, Zack danced with the girls into the night. One of the students said, “Zack is the happiest kid you’ll ever meet. He’s just the most innocent kid and any way he can try to make you happy he tries." 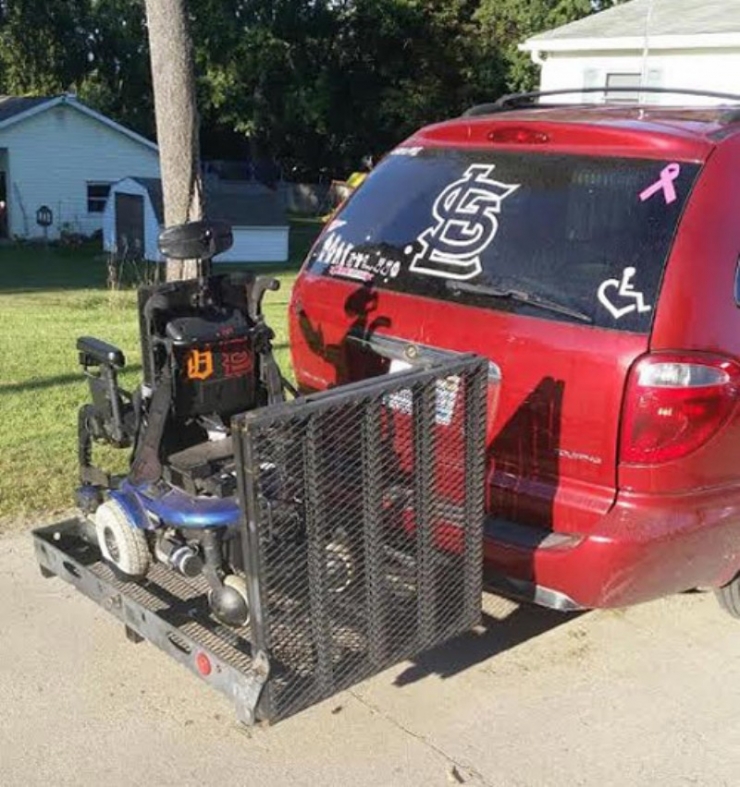 Zack’s doctor is 45 minutes away and transportation has become an issue. The weight of Zack’s wheelchair and the platform is compromising the frame of the minivan. Even worse, Zack can’t sit in the normal seats anymore because he can no longer hold his own head up. With winter approaching, the ramp and platform will freeze over making it impossible to even load Zack into the van. The family desperately needs a safe ADA van to get Zack to his doctor’s appointments. 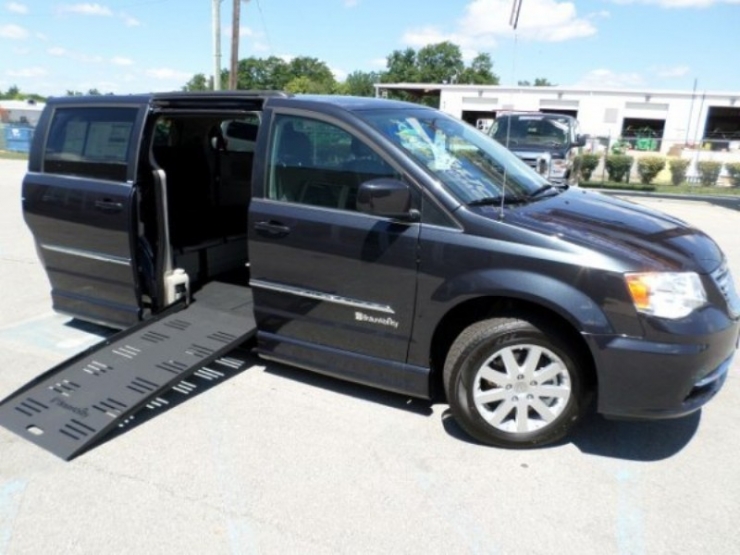 For our part of the story, this is your new 2014 Chrysler Town & Country Minivan, Zink family, courtesy of a Chive Charities grant. It has a spacious side entry and powered ramp operated by remote control, amongst many other ADA amenities. We tried to have this bad boy delivered to your house before this story went live but there’s no point in frittering away any time here. 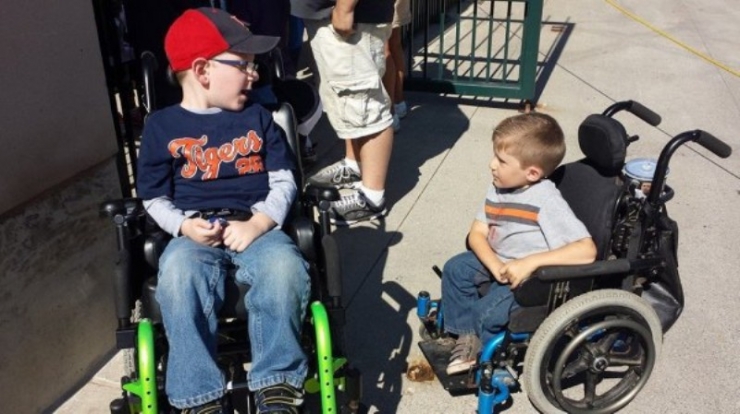 Zack loves the game of baseball. He’s a huge Detroit Tiger’s fan. Cliff even proposed to Jessicah at a Tiger’s game. Zack’s favorite player is Miguel Cabrera. For a young boy, pronouncing Miguel’s name can be a bit of a tongue twister so Zack calls him ‘Cabbie’. 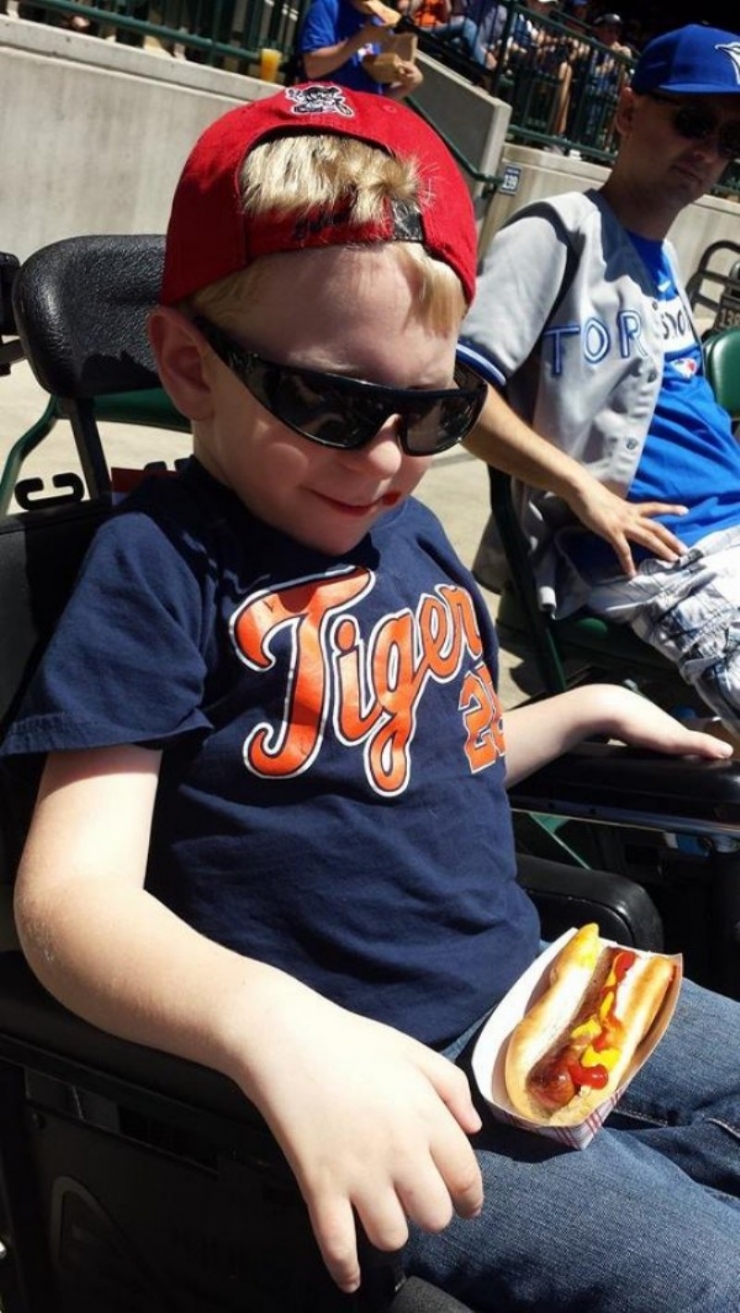 Zack loves to watch the games on TV with his Tiger’s shirt on. He looks over at his dad every time Cabbie steps to the plate and smiles. Cliff said, “Sometimes we’ll go and walk around the outside of the stadium and that’s enough for him.”

This is a photo from Zack’s very first Detroit Tigers game earlier this summer! 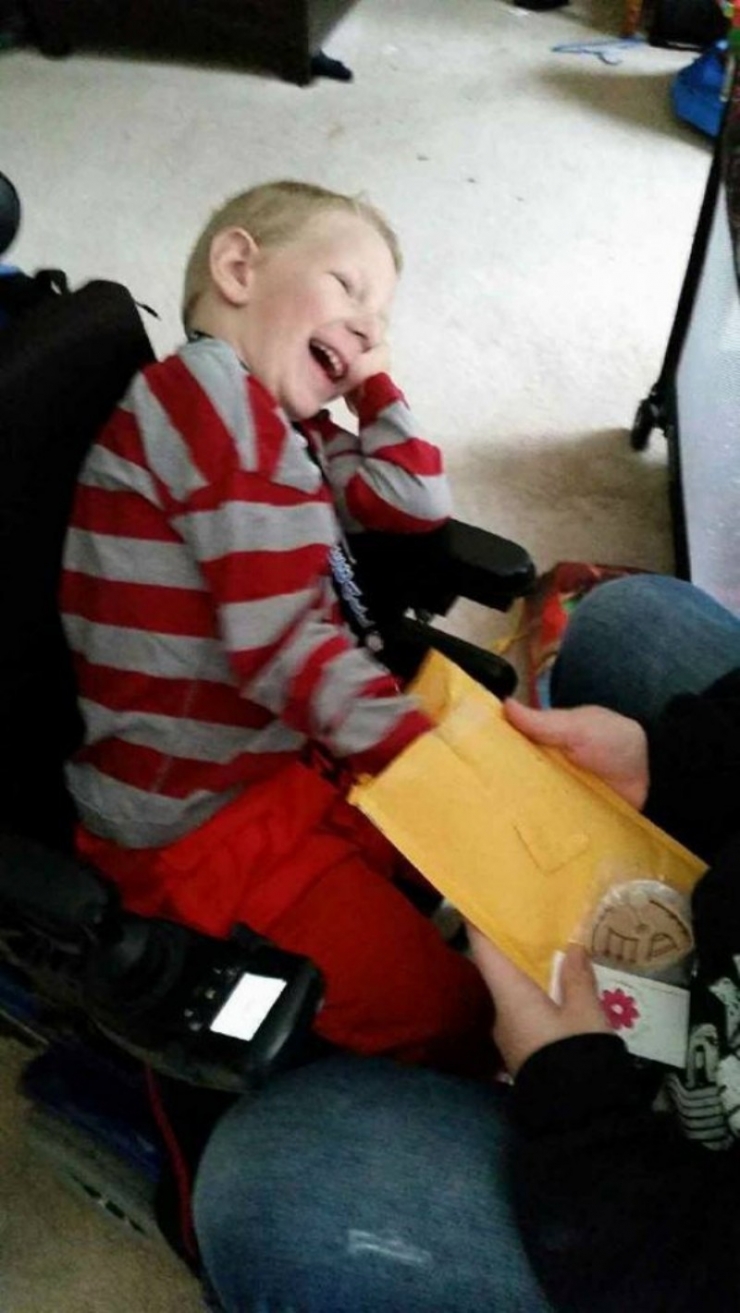 This story will end when I tell you that Zack is no longer with us; that he passed away surrounded by those who loved him most. That’s the way of things.

Laughter is the best medicine and hope spring eternal. For a child without diagnosis, laughter and adventure have been Zack’s self-prescription.

Is there a member of the Detroit Tiger’s organization out there reading this that would like to take Zack on his next adventure? These small joys can go farther with Zach than we may ever comprehend; the thrill of a stadium visit, or a signed baseball. Can you imagine the smile on his face if he got to round the bases of Comerica Park or possibly experience the thrill of meeting one of his Detroit Tigers heroes?

How you can help:

You can help by simply sharing the story on Facebook and Twitter. You may only be a few degrees from somebody in the Tiger’s organization and not even know it. I want every phone at the Tiger’s front office ringing off the hook. The Tigers have a rich history of charity. I have no doubt if we put this solidly on their radar, the Tigers will seize this opportunity to make Zack’s day.

In my research for this story, I did not happen across a single photo where Zack is not smiling. Dr. Suess once said, “Don’t cry because it’s over, smile because it happened.” It’s October and baseball is still being played, the Fall Classic resumes tonight as the Royals fight for a game 7 against the Giants. I’m told Zack will be watching, smiling away. 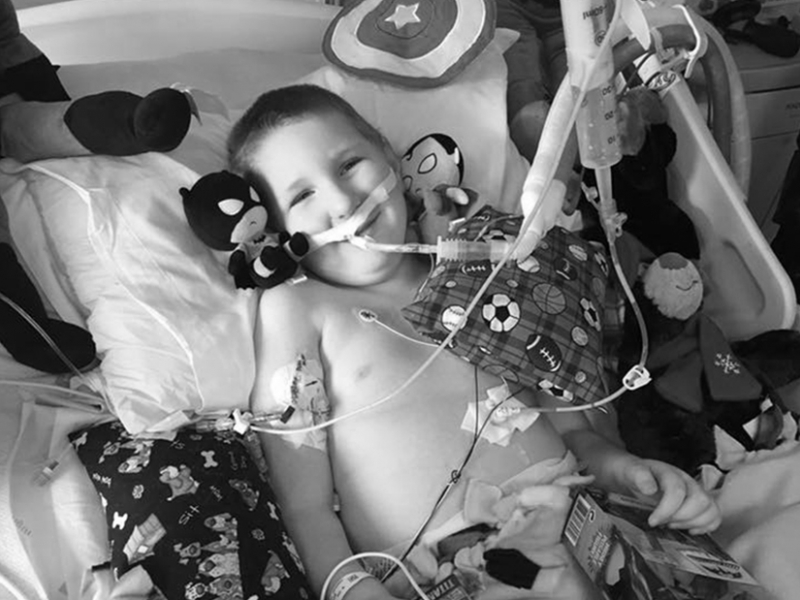 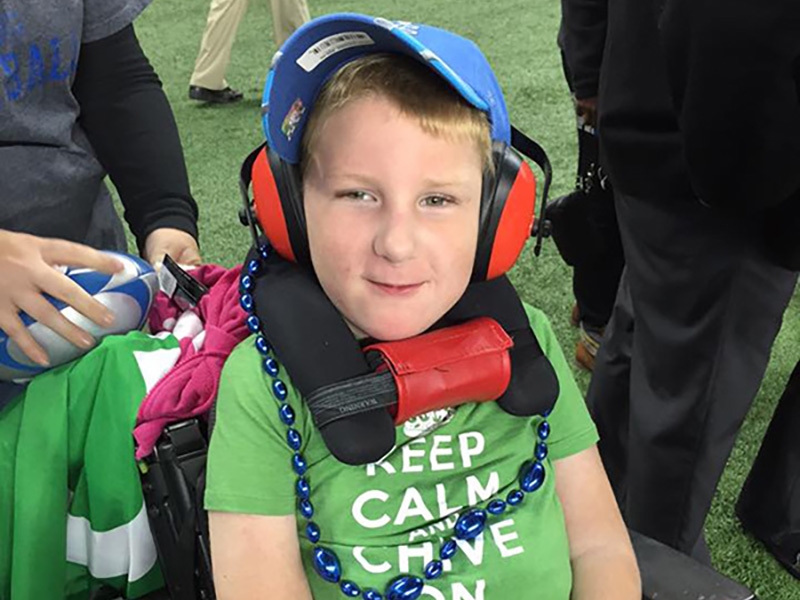 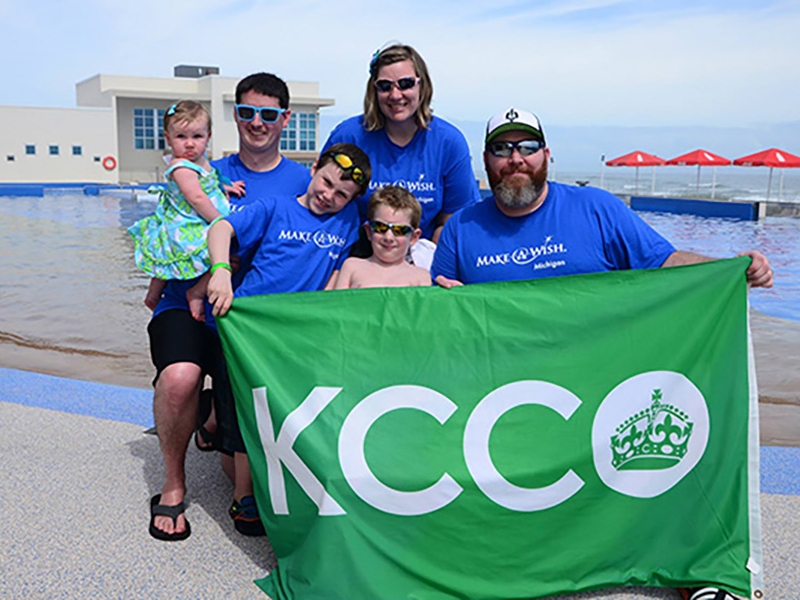