There’s just something about riding on a motorcycle, the wind blowing across your arms, the rumble of the engine vibrating down to your toes, the weight of the helmet tipping forward as you nod to other riders. Many riders refer to it as throttle therapy. 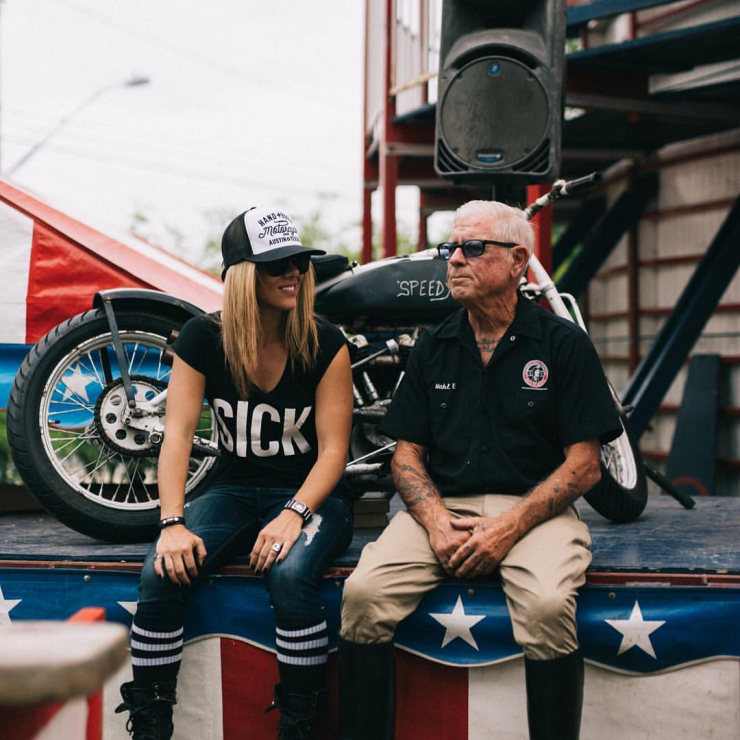 In 2011, Krystal’s boyfriend experienced a tragedy involving a motorcycle. She was working as a nurse the day his life changed - and hers - and while she had dreamed of using her degree to do mission work, she didn’t expect what was to come.

“I had this motorcycle that was basically in pieces,” she told us. “And I had too much invested in it to let it go, so I had to think big picture about what to do to save it.” 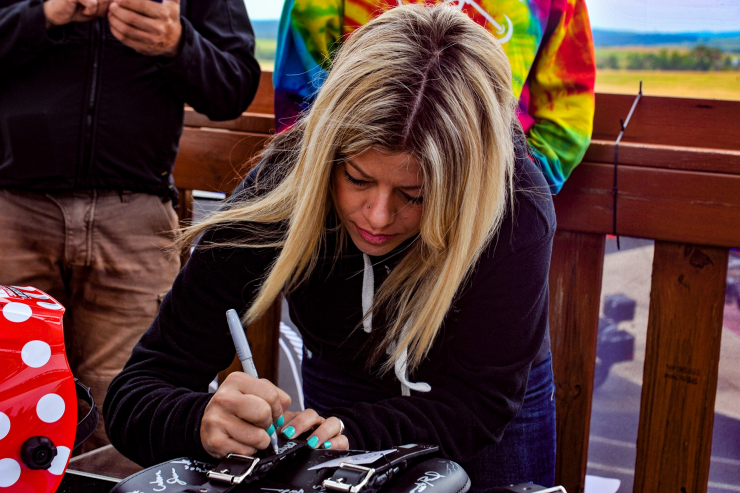 The only problem was Krystal’s lack of experience in building motorcycles from the ground up. This was completely new territory for her and it was hard to know where to begin.

She ended up finding a shop in Austin, Texas with some guys who agreed to help mentor her and fix the bike up throughout the summer. When her nursing shift was done, she would change her clothes, drive to the shop, and get back to work. 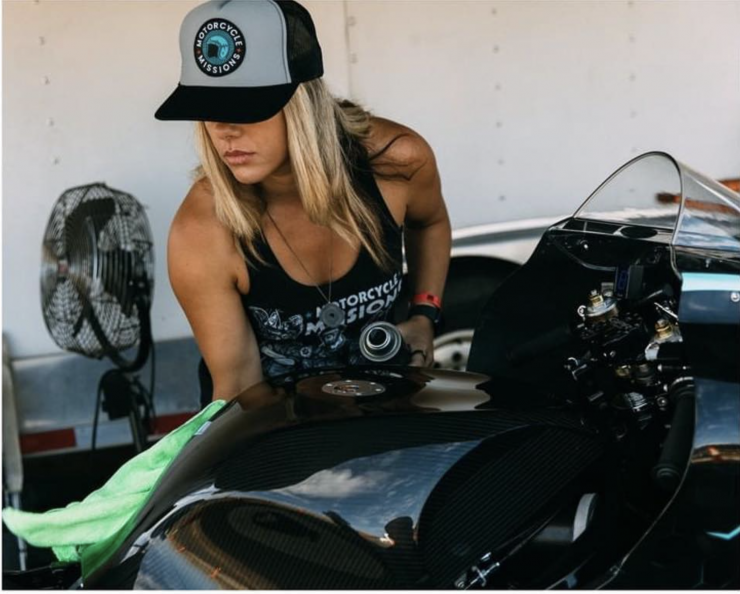 For months, she worked on every square inch of that motorcycle, learning about welding, engine power, carbs, fuel tanks, and spark plugs. You name it, she fixed it. Her attention was so focused that she didn’t realize the change wasn’t just happening on the bike - it was happening with her.

“Once I was done, I realized how therapeutic the process had been for me,” Krystal told us. 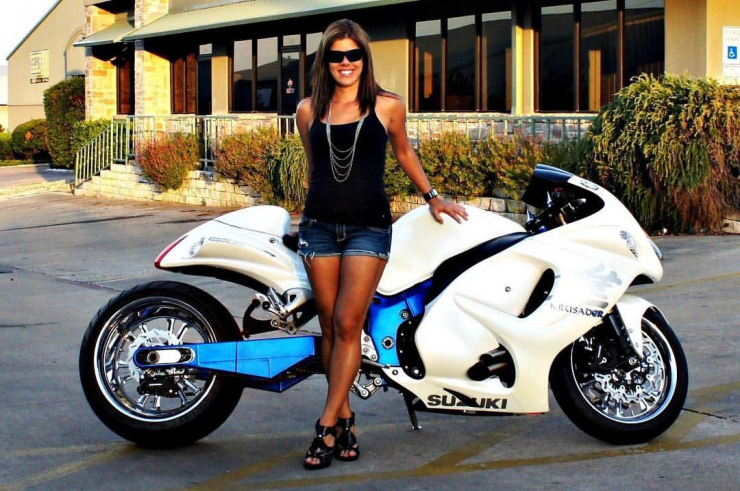 An idea began to form in her mind, but it wasn’t until Krystal lost several loved ones and friends to suicide that she decided to find a way to get Veterans and first responders together.

That idea became Motorcycle Missions, and the first bike build came not long after. 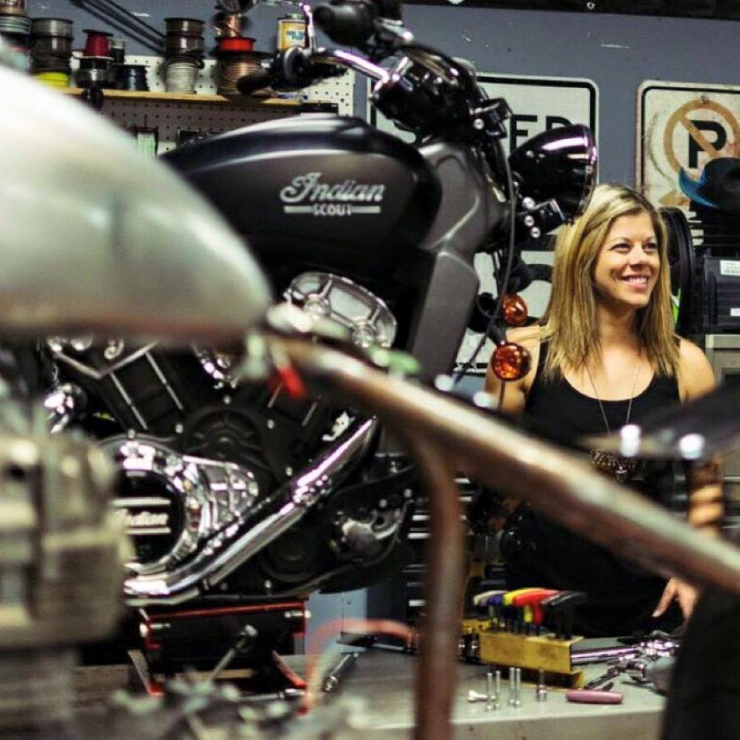 Krystal was at the Republic of Texas (ROT) Biker Rally, the largest motorcycle rally in Texas. She approached the team at Cowboy Harley-Davidson Austin to see if they would let a group of Veterans build the bike (they agreed) and then auction the completed motorcycle to another Veteran (they did). Motorcycle Missions was off and running, and several more builds followed.

Here’s how it works. Krystal typically lines up a sponsor to help cover the cost of materials. (Sometimes, she still has to pay for parts herself, but she’s willing to do it to support the participants).

For one build, Motorcycle Missions’ sponsor Lincoln Electric covered the cost of all the parts. The bike was finished, complete with a sidecar, and sold to a veterinarian in Hawaii who wanted a spot for her massive basset hound, Earl, to ride along in. 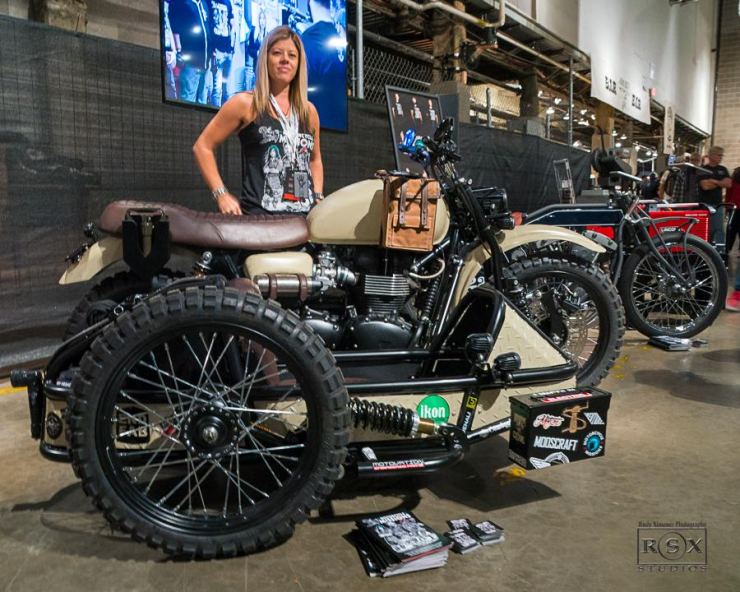 More often than not, the bikes are sold and the money is put back into the organization to fund more programs for more vets and first responders.

“The build costs range anywhere from $20,000-$50,000, and we typically get 8-10 participants together per build,” Krystal shared. “We’re rapidly expanding due to high demand and long waiting lists, but in the immediate future, we hope to double our fleet and resources, as well as expand our footprint here in Austin.” 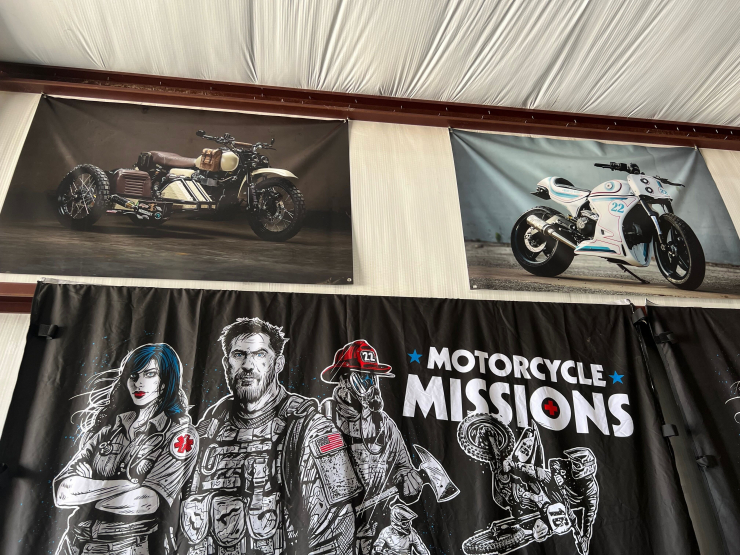 Build Mentorship - Build a motorcycle from the ground up, including fabrication, electrical, engine work, and more. The bikes are built to industry standards and taken to competitions across the country. (The builders can attend the events, too, experiencing the motorcycle world as a VIP experience). 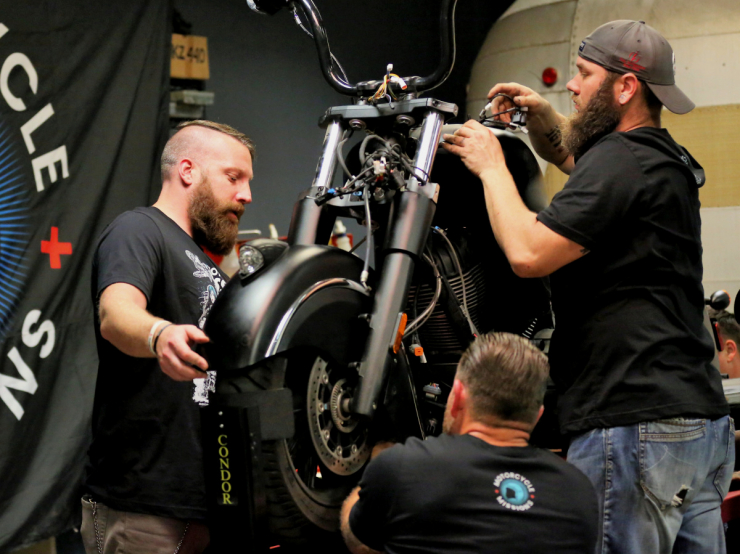 The Throttle Therapy Program/ Project MX - Puts Veterans and First Responders on dirt bikes to help them learn new riding skills, build camaraderie and let out some of that adrenaline they've been missing since their time serving our country. 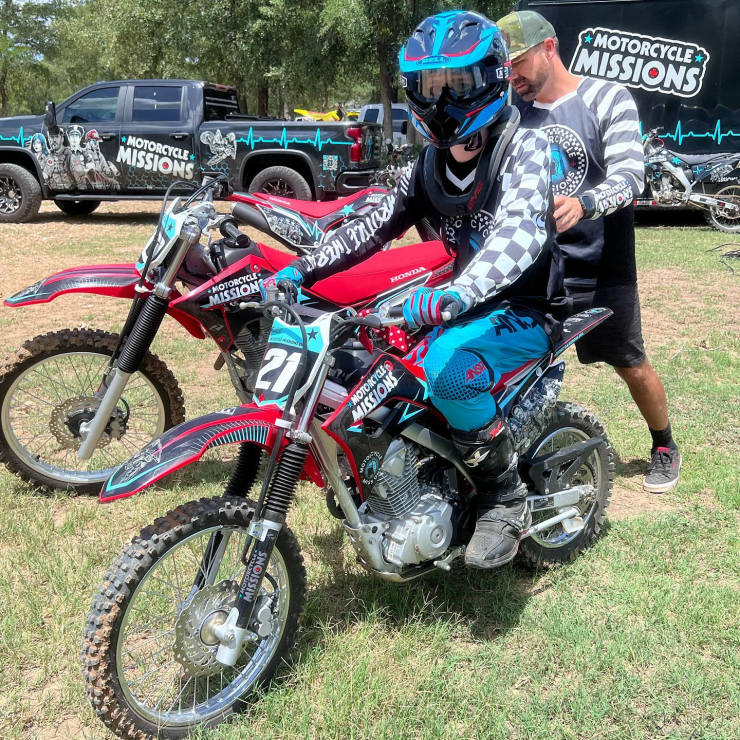 Welding and Fabricating Classes - Learn vocational skills or get inspired to start a new career path after their service to their country. No experience is required to join the class which is taught by a network of professional welders and fabricators from coast to coast. 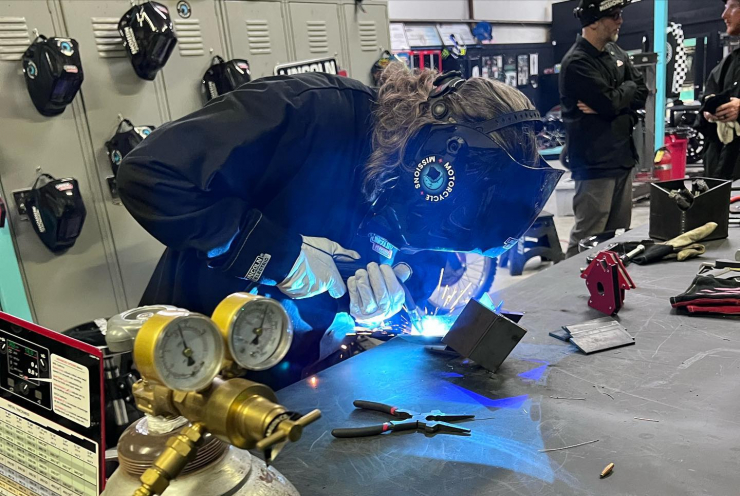 “We hear from many people that this program has saved their lives,” Krystal said. “Participants have stopped drinking, reuniting with their spouses and families, and just finding a way to reconnect with other people.” 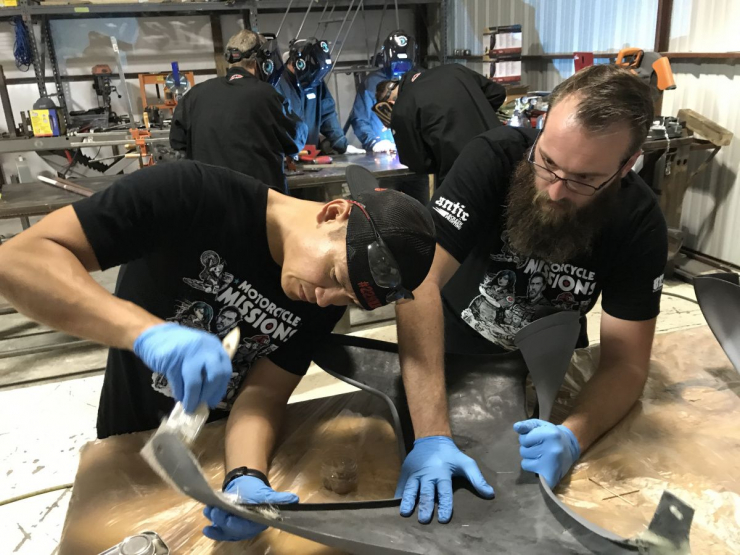 She told us about one particular man who was so ill, that he went to moto nights hooked up to an IV that he pulled around behind him. He’s in near-constant pain, but the sense of belonging he gets from Motorcycle Missions is something he really looks forward to.

The bikes are amazing, that’s clear. They’re so good, actually, that one was purchased by the Haas Motorcycle Museum in Dallas - it was also a national champion winner. 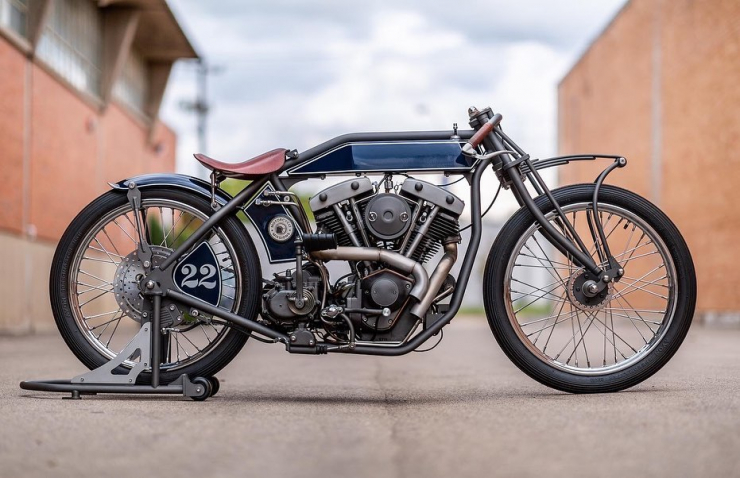 But it’s the reward that comes from the time together that makes the real difference.

That’s why Chive Charities is thrilled to partner with Motorcycle Missions to help further their vision to help more Veterans and first responders. We heard countless stories from Krystal about lives that were changed for the better during the build and beyond. Several even went on to pursue careers in welding thanks to their expert-led training. 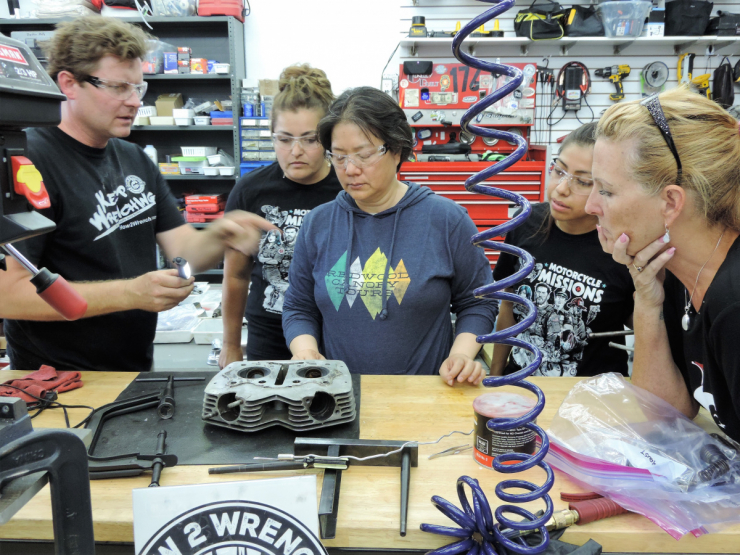 Through the support of our amazing donor community, we were able to provide a $10,000 grant to Motorcycle Missions to help with programming, riding, and welding classes. 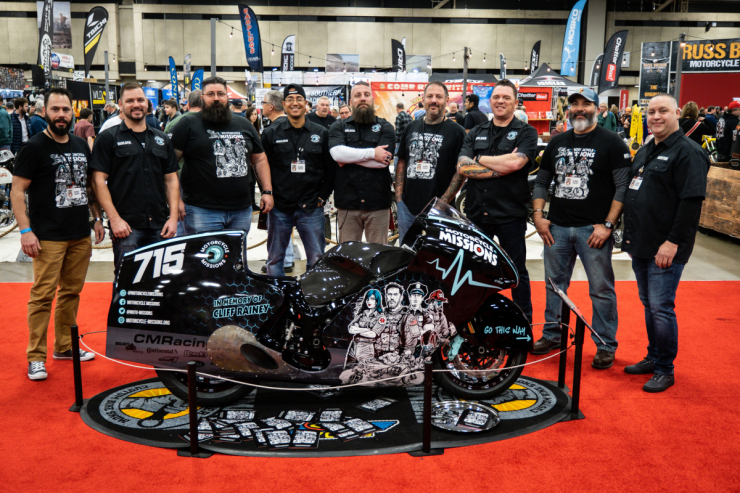 “Vets don’t pay a dime to be part of our programs,” Krystal told us. “And with support like yours, we can keep it that way.”

There’s definitely something special about riding a motorcycle. And for as good as that is, the sense of accomplishment in building one is tenfold. Thanks to donors like you, they’ll be able to bring a little more throttle therapy to the Austin area - and beyond. 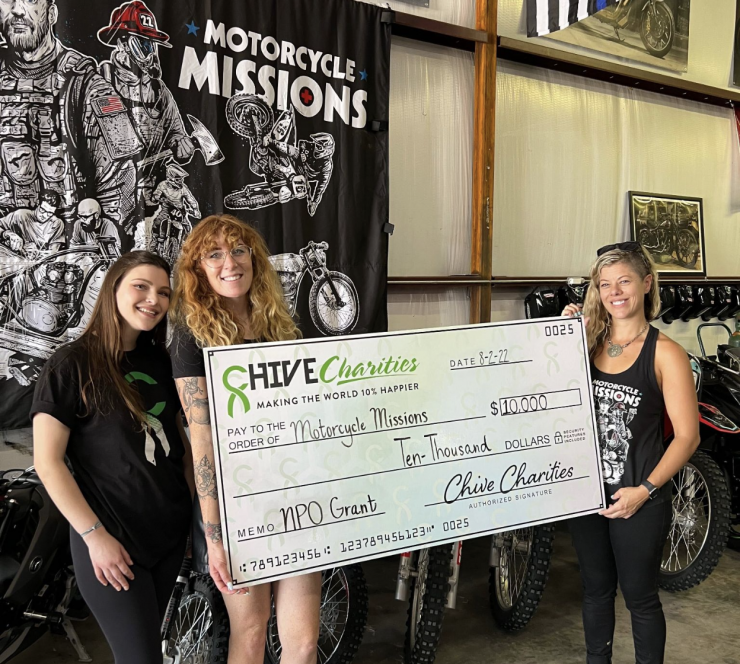 “Thank you all so much for supporting us,” said Krystal. “This organization was born out of heartbreak and sheer will to help people with something that changed my life in a big way. Because of you, we’ll be able to do even more.” 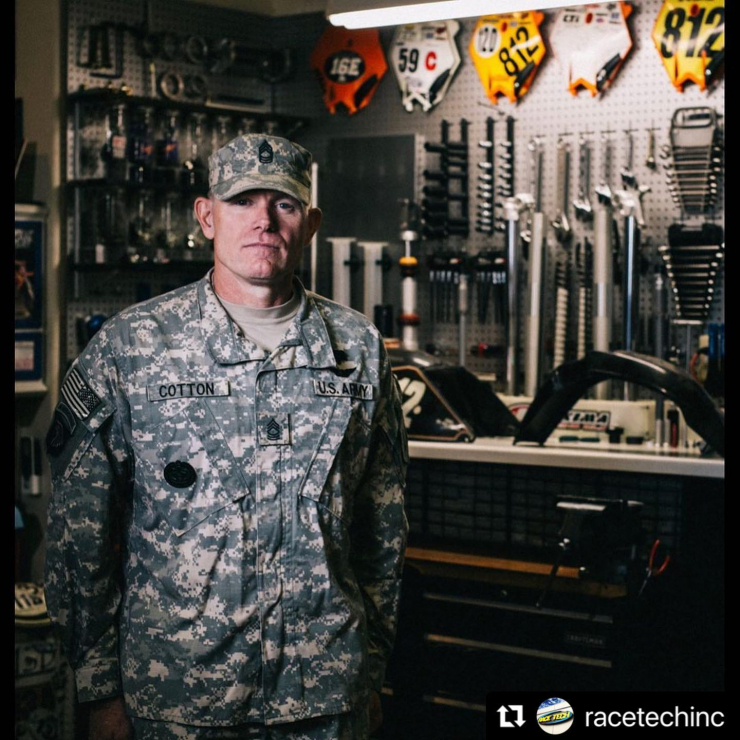 We’re full throttle on making the world 10% happier, and thanks to your donations, we’re not letting up on creating life-changing impact. Become a monthly or one-time donor and DONATE HERE.

P.S. If you’re a Veteran or first responder interested in participating with Motorcycle Missions, visit motorcyclemissions.org/programs.