Fully fund his dream trackchair, decked out with everything he needs.

Bull riding has long been recognized as one of the most dangerous sports in the world. At one point, a study showed that nearly 20 of every 100,000 rodeo contestants could expect to suffer a catastrophic injury. In football, that rate was less than one in every 100,000 players. Catastrophic injuries were categorized by a player either dying or having their life altered in a significant way. 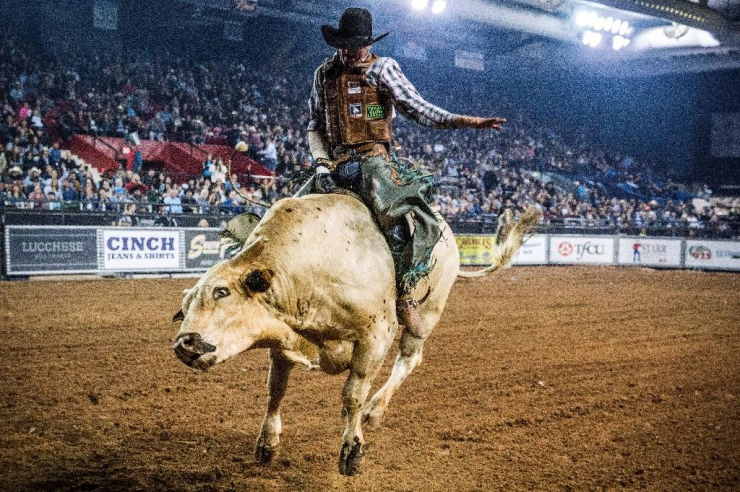 To earn a score in competition, riders must stay on top of the bull for eight seconds with one hand gripped on a bull rope. Eight seconds can change a life forever. And sometimes, when you think the ride is over and the danger is out of the way, you can have your legs taken right out from under you.

In 1989, American cowboy and champion professional bull rider Lane Frost was competing in the Cheyenne Frontier Days Rodeo, having just completed a successful 85-point ride on a bull named Takin’ Care of Business. The ride was over, the danger behind him. As Frost dismounted and landed in the dirt, the bull turned and hit him in the back with his horn, and although he was not gored, he broke several ribs.

Initially, he rose to his feet, waving for help. But the bull had severed a main artery, and after taking a few shaky steps, Lane collapsed and died. He was 25 years old. 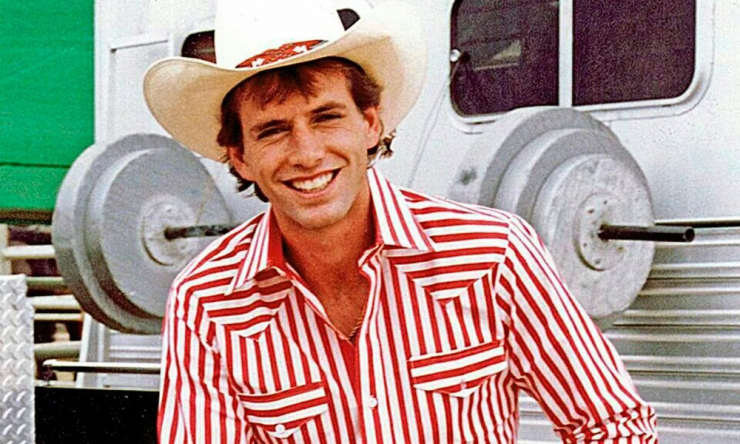 Nearly 30 years later, a baby boy would enter the world, named after the legendary bull rider, and face the longest 8-second ride of a lifetime. (Donate here.) 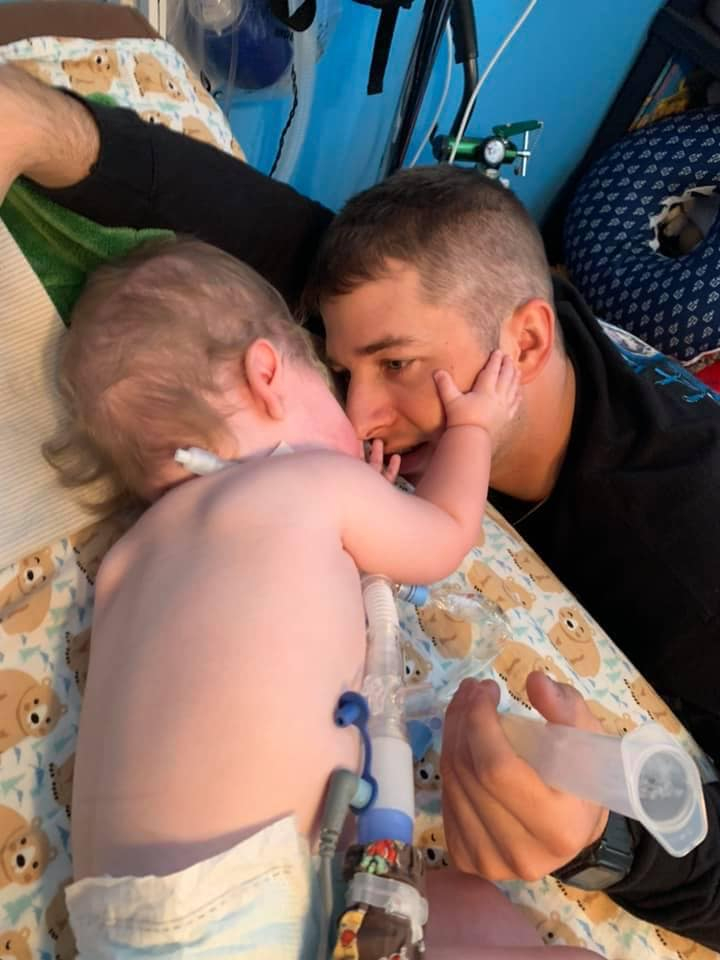 “Beginning with my wife Katlyn's pregnancy, she never once felt our son Lane move, but doctors assured us that everything was normal and that we had nothing to worry about,” said Lane’s father, Tim, a firefighter from Bradenton, FL.

“She had to go for twice-weekly ultrasounds to check on Lane because there was no fetal movement. About a month before his December due date, during one of the ultrasounds, the doctor did not like what he observed and my wife was admitted on November 8 for monitoring.”

“I got off of shift from the fire department on the following day and we were told she would be induced. At around 11pm on Friday, November 9, the ultrasound showed there was no movement and that Lane had nearly no heartbeat. The doctors rushed her to the operating room and performed an emergency C-section. That’s when we first learned that the ‘healthy’ baby we expected to have was not what the doctors had told us.” 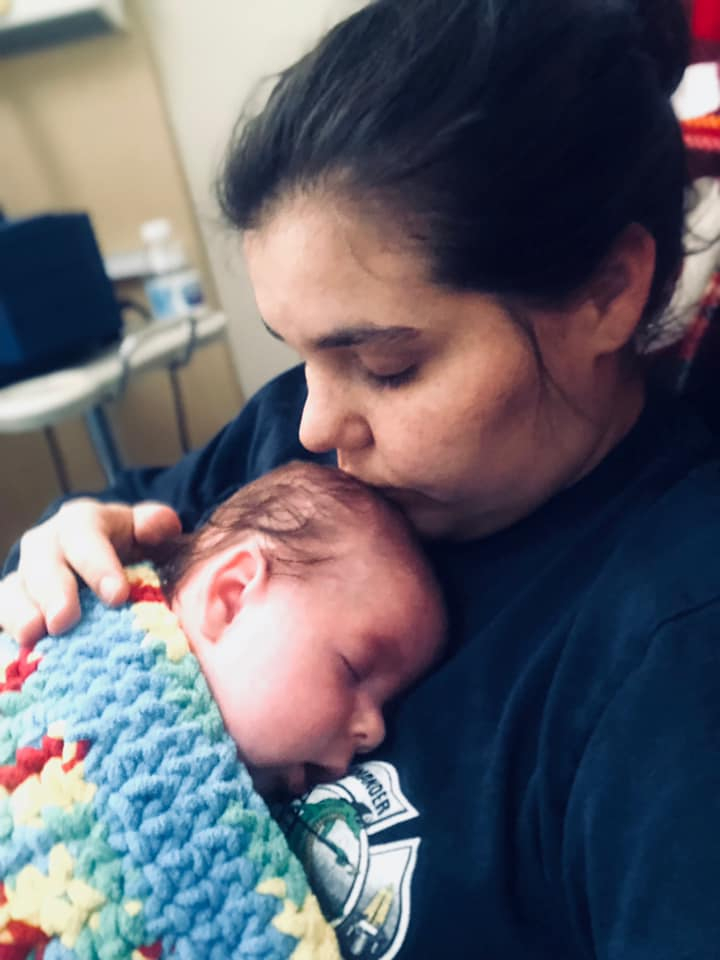 Miraculously, Lane fought back, holding on for his life. The medical team was able to revive him, rushing him to the NICU at Johns Hopkins All Children’s Hospital.

For more than four months, Lane endured numerous procedures and life-saving measures. Two weeks prior to his discharge, Tim and Katlyn finally received a diagnosis for their son. They were told he had a rare condition called X-linked Myotubular Myopathy (XLMTM). It affects 1-in-50,000 boys and carries an exceptionally high mortality rate - so similar to the bull riding profession of his namesake. 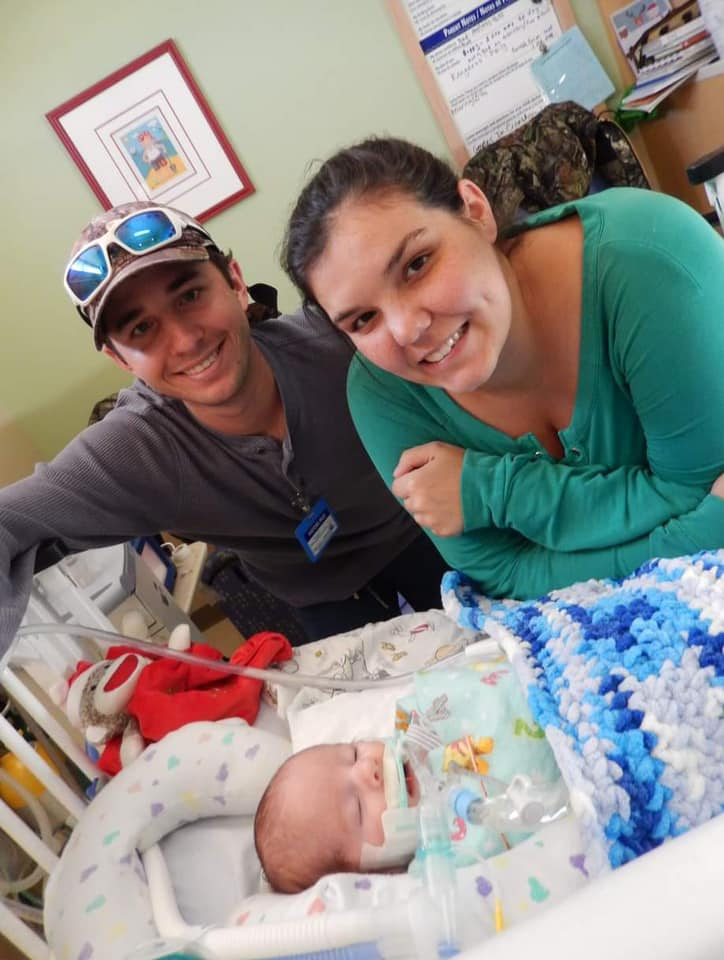 “My wife and I had to mourn the baby and life we thought we’d have and instead, rejoice in the fact that God gifted us with this amazing and precious baby boy, regardless of the hurdles the three of us would face together,” said Tim.

“Through the ups and downs, we have gotten Lane so far from where we started, despite having the most severe symptoms of the disease.” 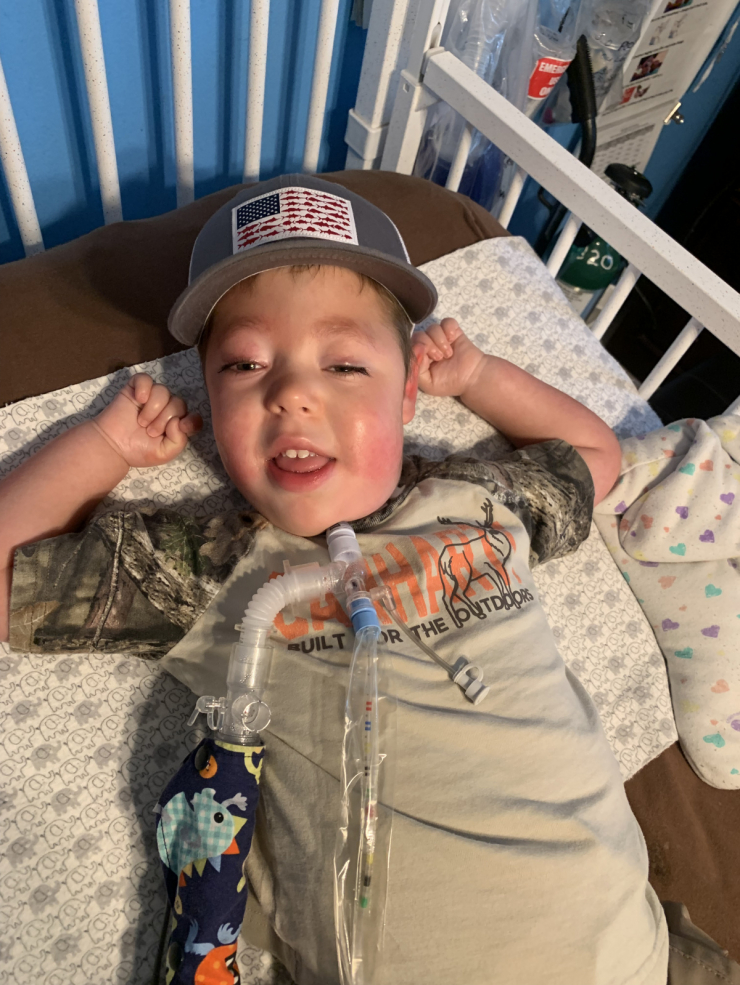 At just three years old, Lane has been through more than most of us can imagine. He’s getting stronger and thriving, but still requires 24/7 nursing care and support. That puts a lot of strain on the family, and though Tim works full-time as a firefighter while Katlyn cares for their son, the sheer amount of equipment and supplies Lane needs is overwhelming. 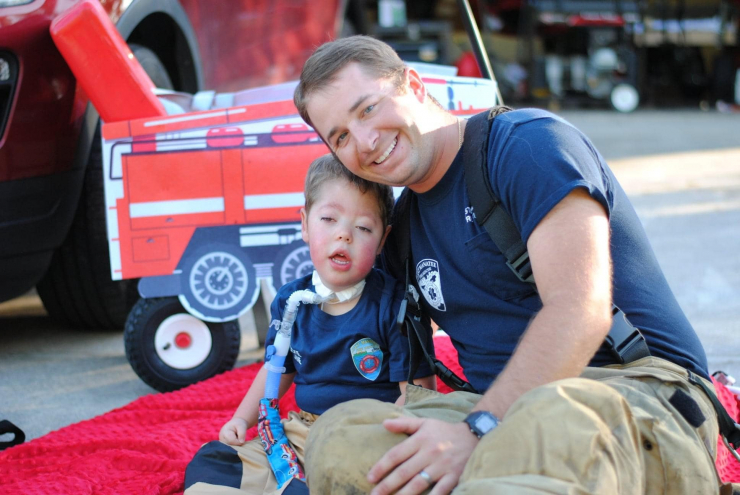 Currently, Lane is not able to walk, talk, or move around the room independently. But despite those limitations, he’s continually amazing doctors with his strength and ability to communicate.

“I can teach him a sign today - one time - and he’s going to remember it forever,” Katlyn told us. He’s a champ in every definition of the word. 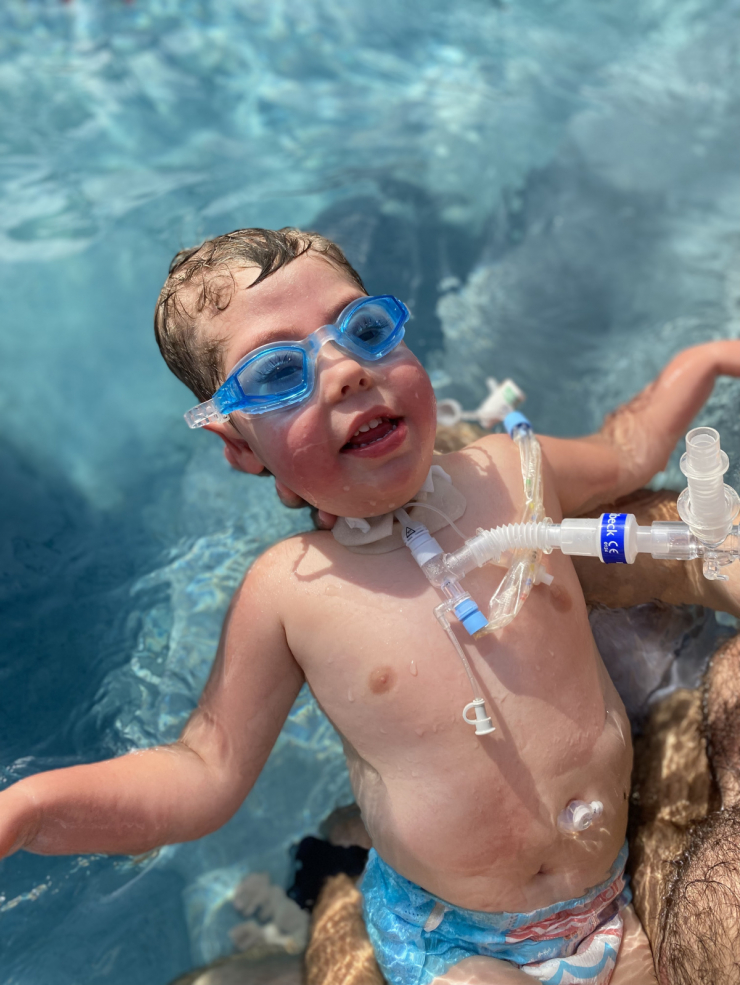 We also asked his parents about some of his likes and dislikes, and what makes him happiest. “His dog is his best friend, he always wants to be around him,” they said. What’s even cooler is that Lane’s dog’s name is Tuff - the same name as Lane Frost’s closest friend and the person he waved to for help that fateful day in the arena. 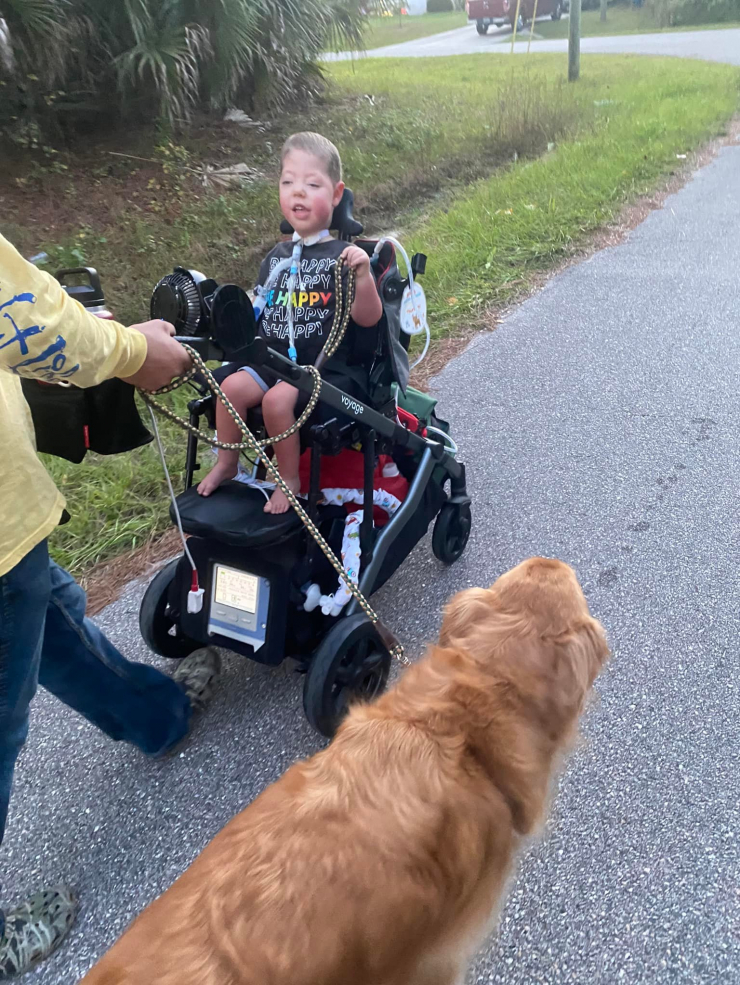 “As for dislikes, like most of us, he hates change. Keep him in his routines and don’t introduce something new,” they laughed.

One of those constants in his life is a daily walk outdoors. He looks forward to it so much that while we were on the call and inching up to the time they usually head out, Lane started getting antsy. It was time to go, NOW.

Unfortunately, that’s been more difficult since he got his electric wheelchair. Because it’s not an all-terrain wheelchair, he frequently gets stuck or can’t go down certain trails or pathways. 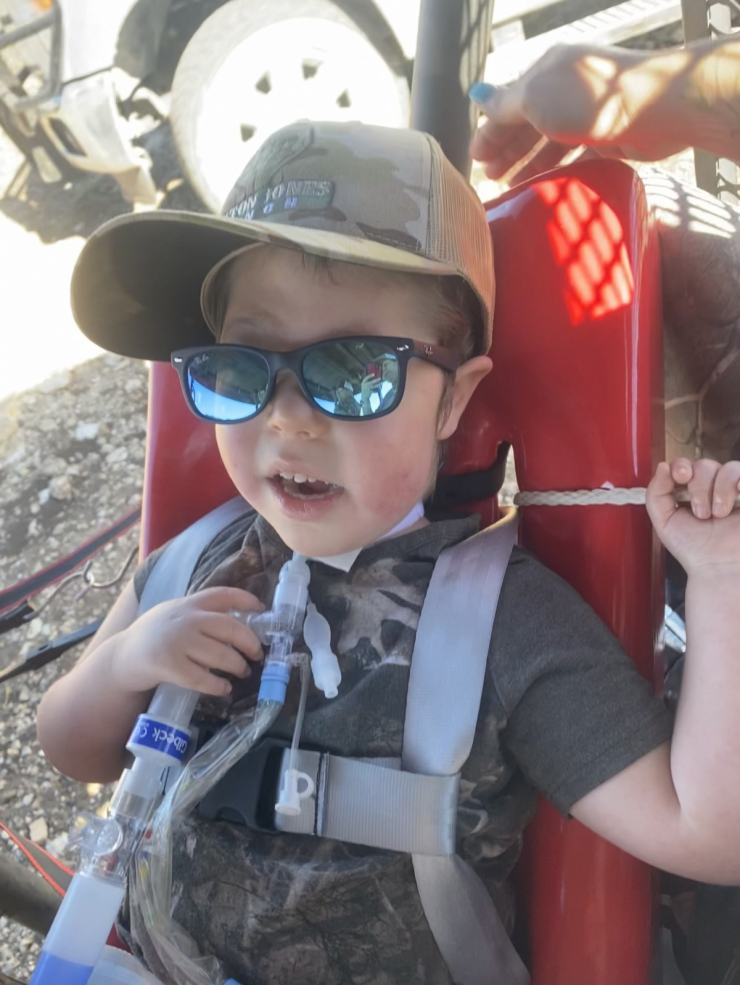 “He’s like any other child. He wants to do fun things - play in the dirt, roll around in the grass, all of that stuff. If we go anywhere other than on pavement or cement (even grass), it won’t move. We’re hoping that a trackchair will help us keep him doing the fun activities he loves the most,” Tim explained.

One day, they were looking online for resources to help find a way to cover the cost and get Lane what he needed. That’s when they stumbled across Chive Charities.

And because we have an incredibly generous donor community, we were well-positioned to step in and fully fund his dream trackchair, decked out with everything he needs. The total impact was $23,287. 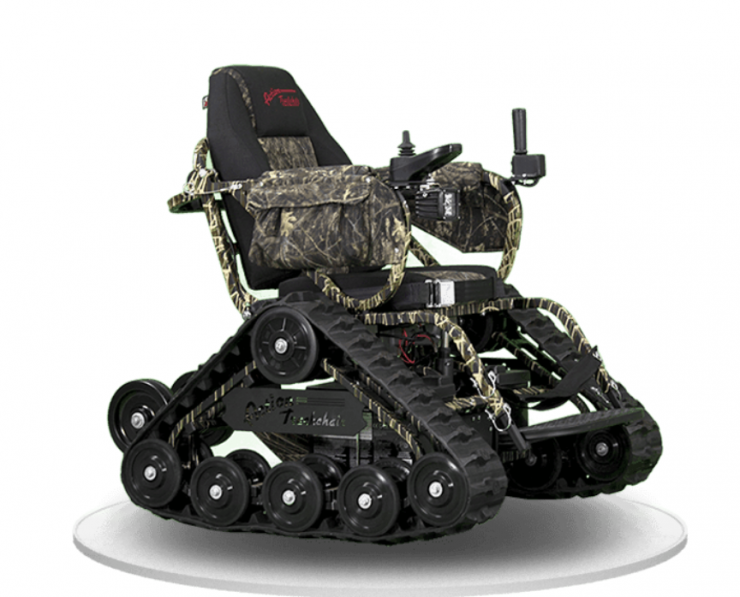 “You guys are the magical key to opening these doors we never thought we’d get to the other side of,” Tim said. “This is going to be amazing for our family.” 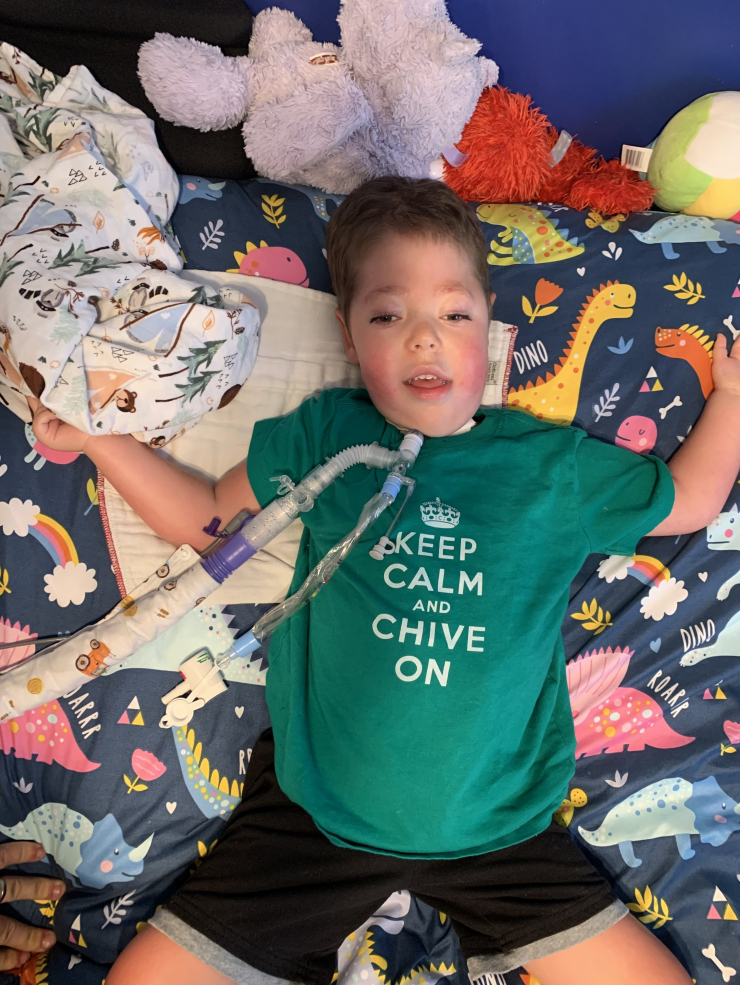 Lane never asked to face a lifetime of challenges. But he’s taken on all the obstacles in his way better than any professional bull rider. It’s been the longest 8-second ride, but you can’t buck him off. He’s too strong, too determined. He’s a champion.

Lane is the 34th recipient we’ve helped so far this year, and with your support, we could get to 75 by Christmas. Better yet, it doesn’t take long to sign up and become a donor. Maybe even just eight seconds. DONATE HERE. 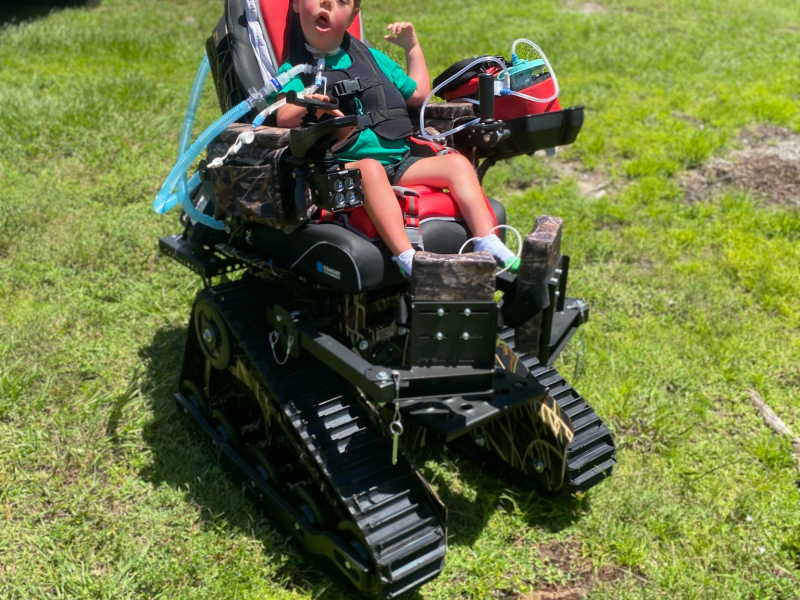