A gymnast and cheerleader bravely faces a new reality, needs our help

Kenze Messman’s service dog Makki could smell Kenze’s histamine levels rising before she could. Here we go again, Kenze thought. Her next episode was imminent. She had 30 seconds, maybe 60 if she’s lucky. Makke was getting Kenze out of her wheelchair, a series of maneuvers that you don’t often see a dog performing everyday. Best to be on the ground for what’s coming. Kenzie would prefer it didn’t happen at all. And most of all, that it didn’t happen at the local Wal-Mart.

She was feeling lightheaded now, Makki had her on the ground and was performing a series of compressions. To the shoppers, it looked as if the dog was administering CPR, which is not completely inaccurate. Makki was performing DPT, “Deep Pressure Points,” which help calm the body until the episode passes.

Your next episode will begin in 30 seconds. Kenze’s episodes could manifest as seizures or even mimic a stroke. You never know. Wonder what it will be this time? The compressions intensified, the shopping carts rattled past. Kenze began to lose consciousness. Something wicked this way comes.

Kenze vomited. The next episode was here. See all you shoppers on the other side of this. Then, darkness. This episode lasted 30 minutes, she would vomit non-stop the entire time. 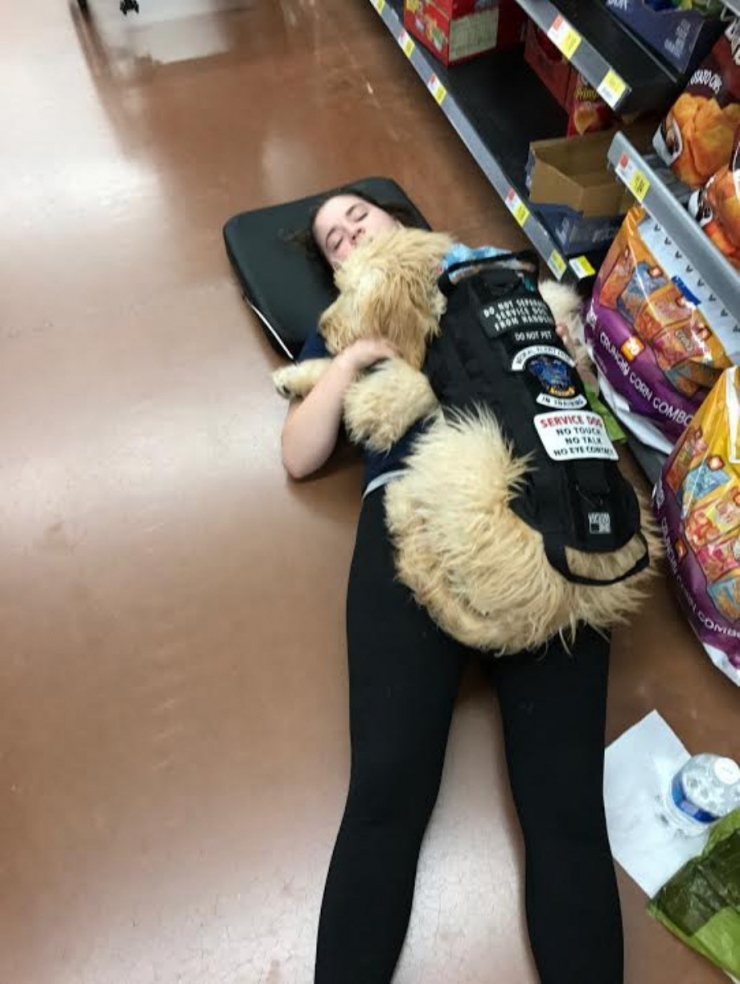 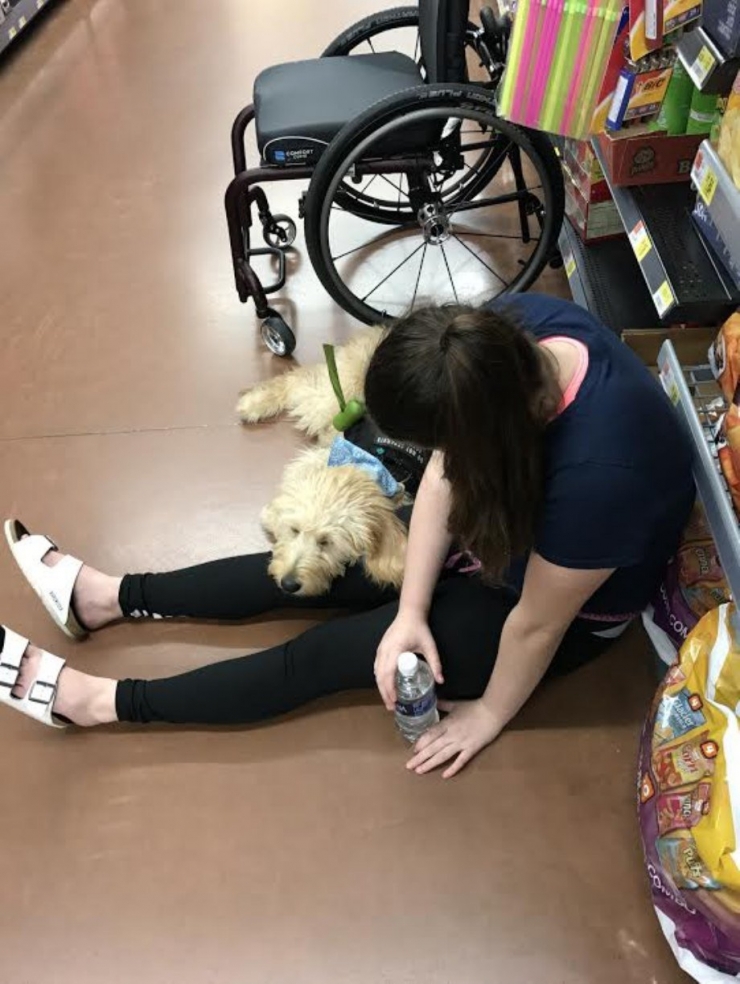 It happened again in the Target Christmas aisle a month later. Kenze propped herself up against the plastic NOEL place settings to recover. Less than a year ago, things were so different, I was normal. 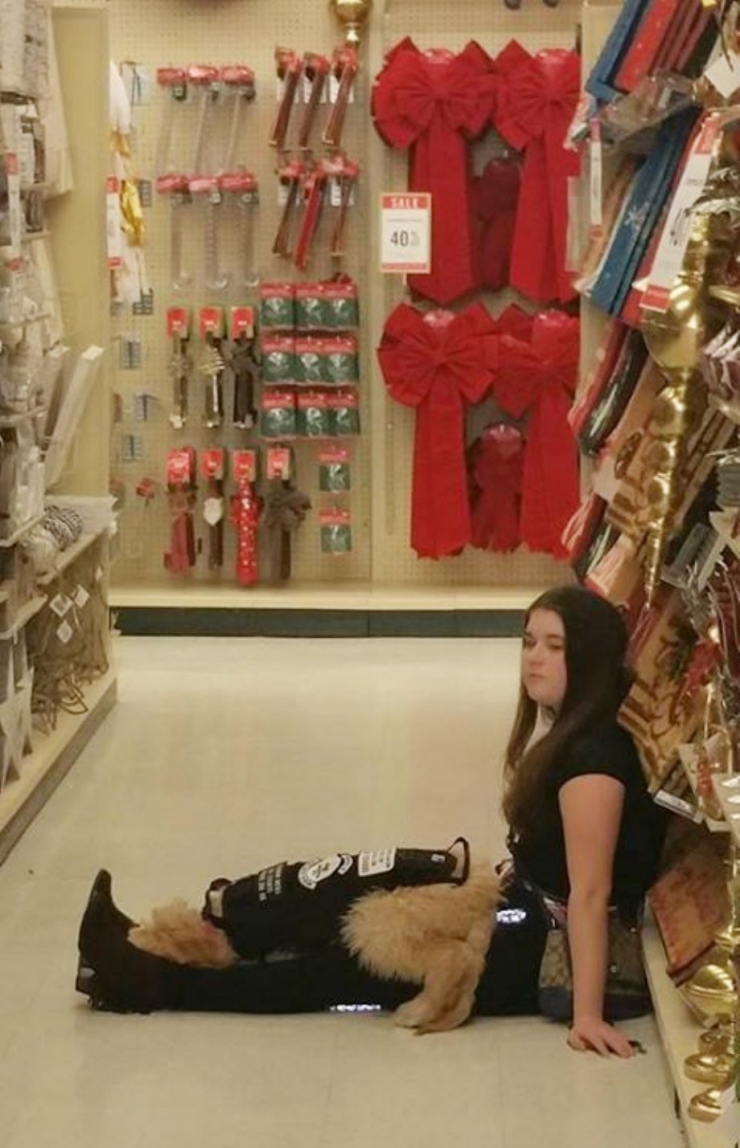 A year earlier, Kenze was on the varsity cheerleading squad as a freshman. She was a competitive gymnast, a level 5 – Olympic gymnasts are level 8. She was a normal, growing teenager as far as those things go. 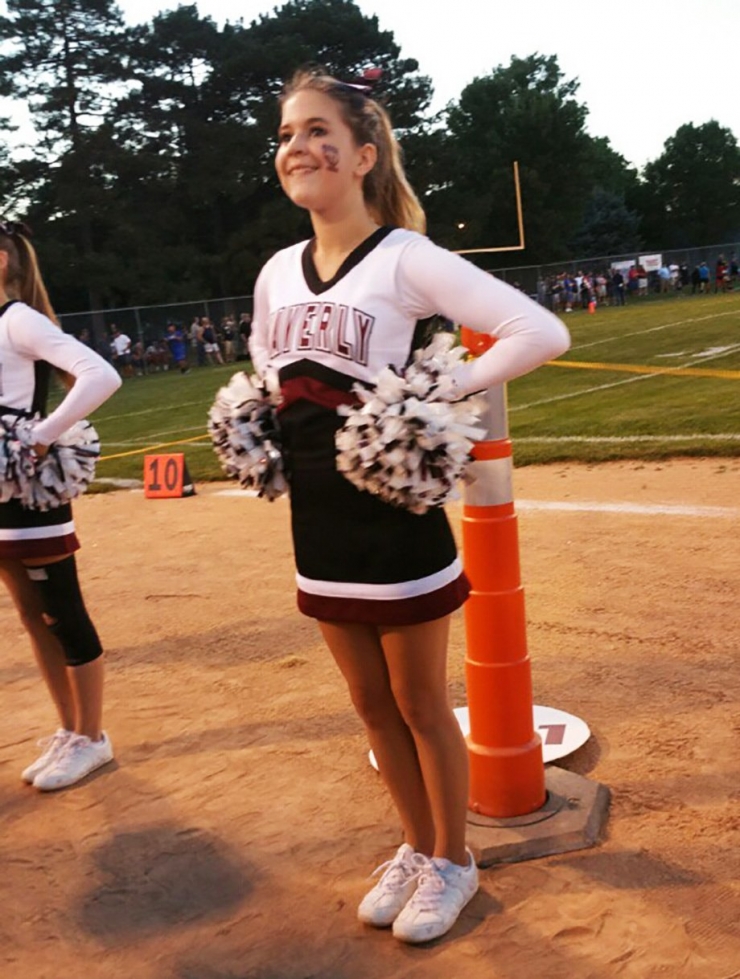 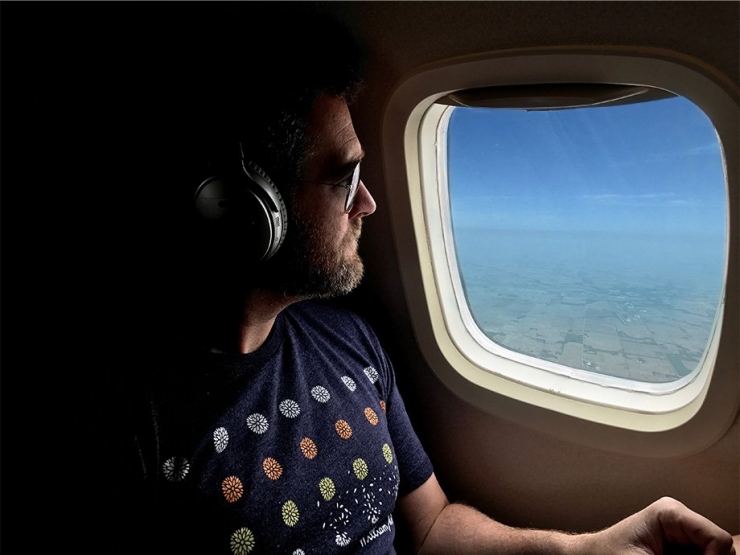 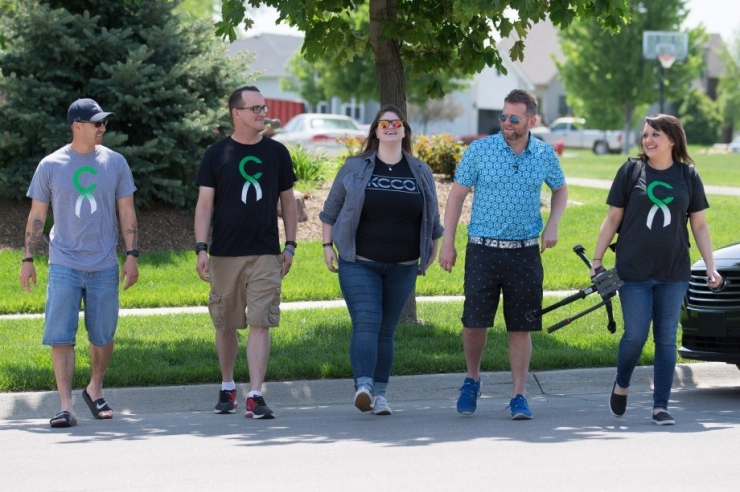 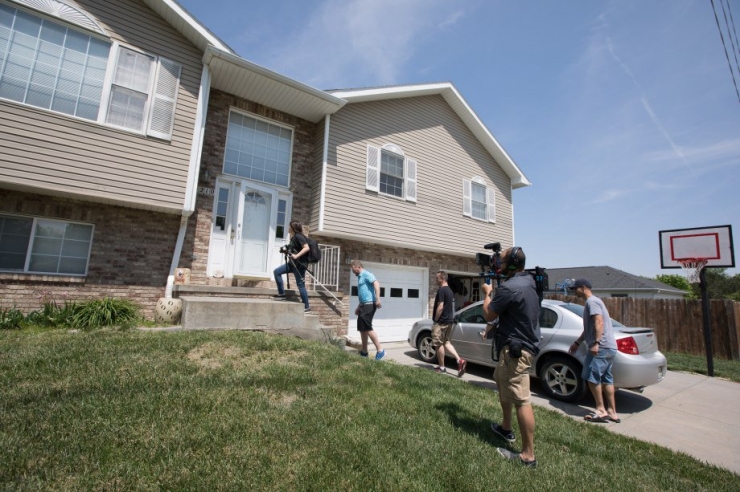 Help was finally on Kenze’s doorstep. 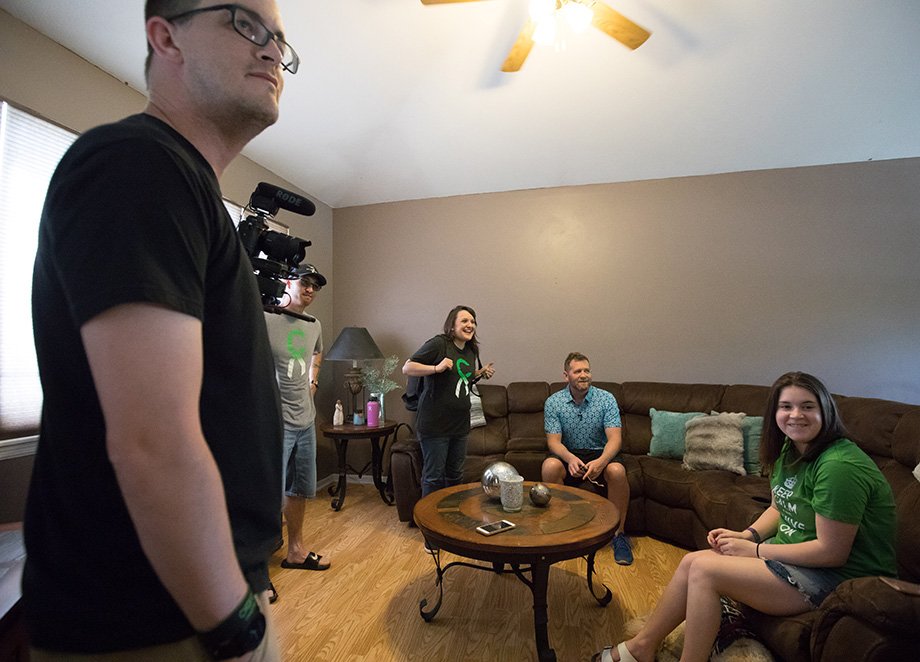 Kenze has a great sense of humor. When I asked her how she got so good at gymnastics, she quipped, “Whenever I fell down, I got back up.”

But what really struck me about Kenze was her sense of calm. Getting overly excited or upset carries negative consequences. The presence of the camera crew didn’t phase her. “I want people to hear my story…I want people know what’s wrong with me if it will help others who have what I have.” 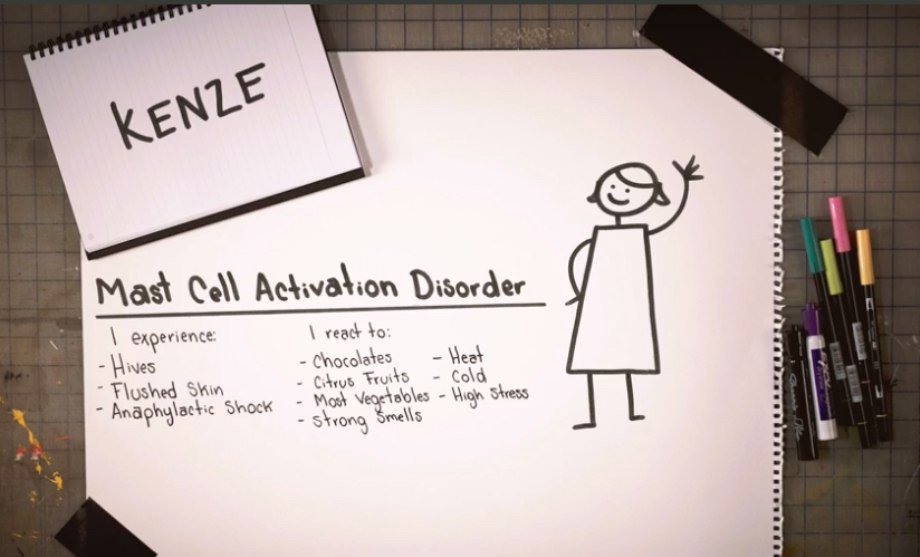 Kenze has a series of syndromes that domino one after the other. It started with Ehlers Danlos Syndrome (EDS), which causes her joints to dislocate easily. EDS dominoed into postural orthostatic tachycardia syndrome (POTS), short-circuiting Kenze’s circulation and causing increased heart rate, blood pooling, fainting, and seizures.

All this toppled the last domino, Mast Cell Activation Disorder, meaning her cells go to battle against each other in one big allergic reaction cage match. The contenders for a reaction are mind-blowing – simple things like oranges and chocolate and sunshine and air all make the cut. AIR. Her body is pretty much allergic to itself, and every day begins with a question mark. Something that’s no big deal today could be lethal tomorrow, and there’s no way to know what it’ll be. 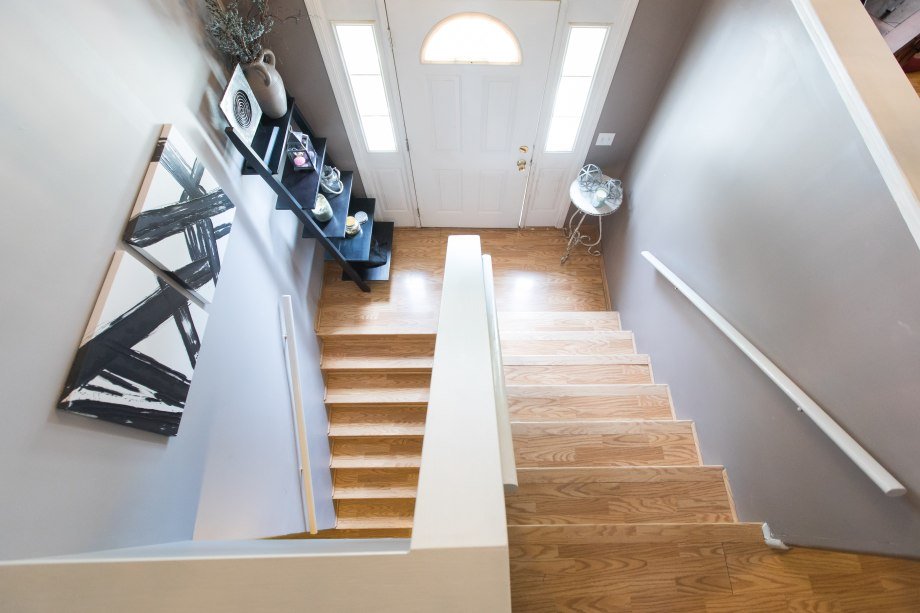 But there are some allergen constants that will trigger a reaction: bright lights, mold, and strong smells. All of these co-conspirators are present in Kenze’s own home.

Two years ago, the family home flooded, and now mold is growing under the floorboards. 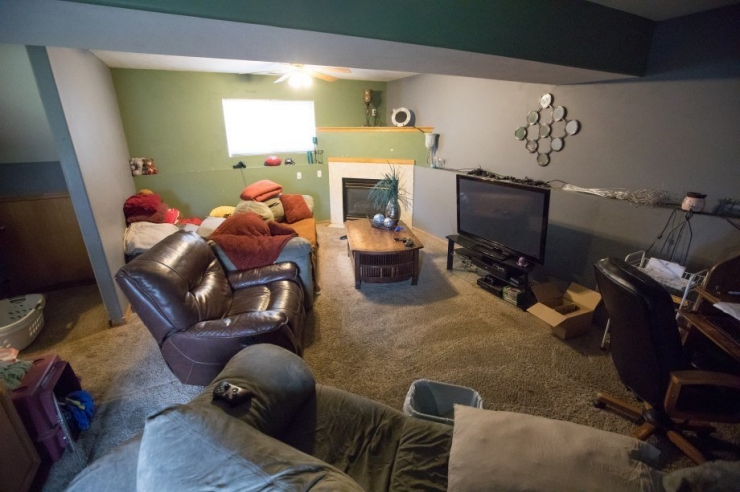 Over the years, the family has included a number of dogs that do what dogs sometimes do to carpet. This wasn’t a big deal, of course, for the first 15 years of Kenze’s life, but the ammonia combined with the existing mold in the subfloor can cause Kenze to have an episode. Forget about the basement, it’s basically a no-fly zone. 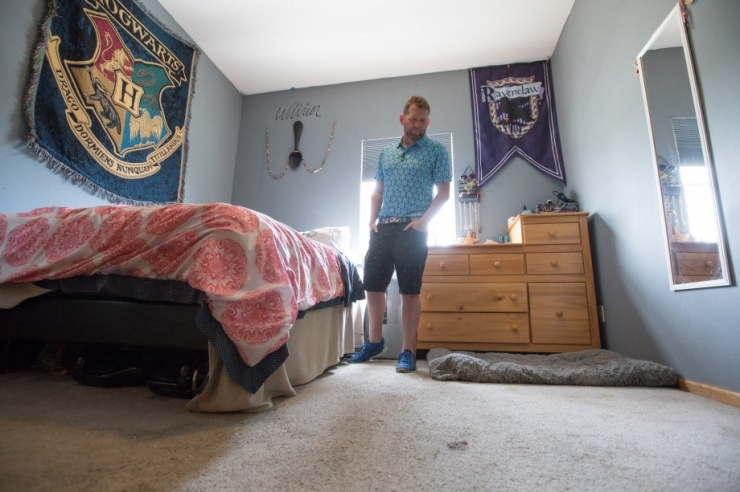 Kenze showed me to her bedroom. Where you sleep should be your sanctuary, but her room is carpeted. The musty odor hits your nose the minute you walk in. I didn’t have to ask – Kenze’s bedroom has become her own worst enemy… 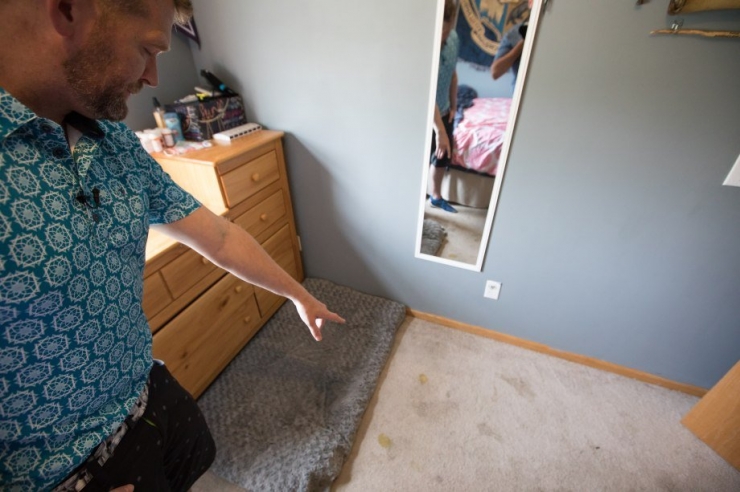 … and she’s already a prisoner in her own home. With summer here now, the pollen, heat, sun…you get the idea. 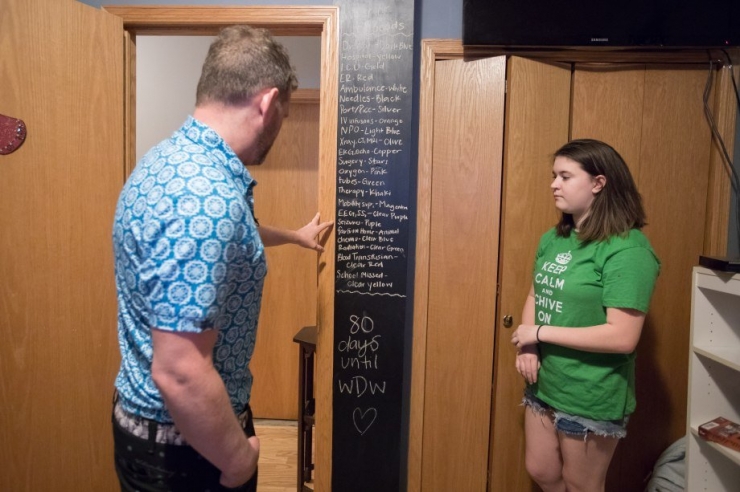 While most teenagers have dream boards and diaries, Kenze chronicles her time in a different way. 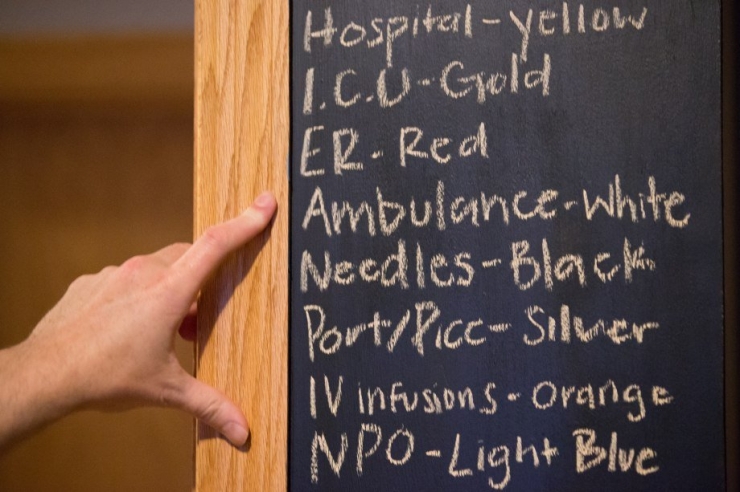 A chalk board near her bedroom door marks the time with hospital visits, ambulance rides, and doctor appointments. 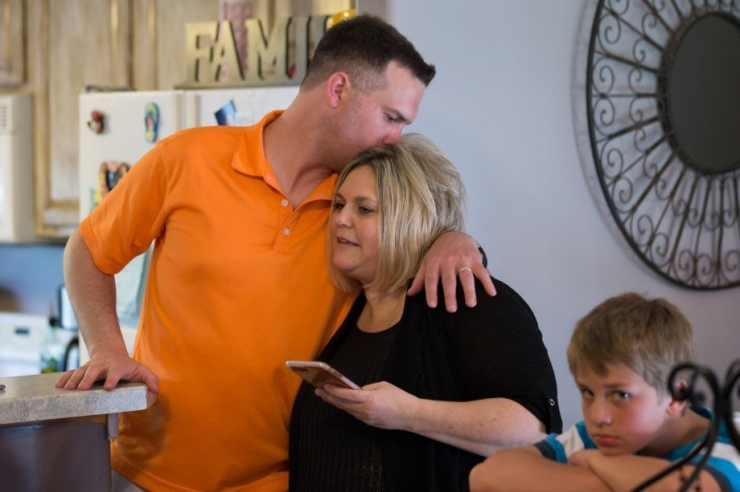 Kenze’s mom and step-dad Angie and Jeff Parde are truly great people. Angie works from home so she can be close to Kenze, and Jeff works extremely hard to get Kenze the care she needs. Theirs is a devoted, loving family. 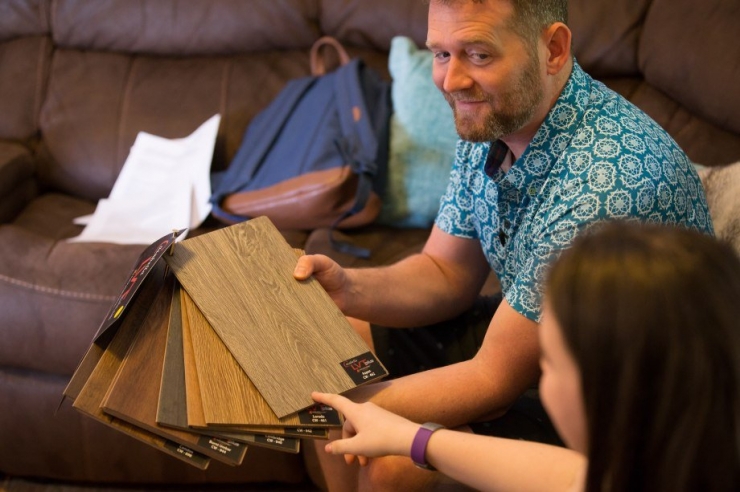 You know it’s a proper charity campaign when wood samples are presented. We asked Kenze to choose her favorite to replace the carpet in her bedroom. She chose Aspen CW-462 as soon as she saw it. It will be cut lengthwise, into 7’ planks, and installed cleanly in her room, which will be scrubbed and painted. Her window will be tinted so Kenze can see the world outside without peering from behind a dark shade. 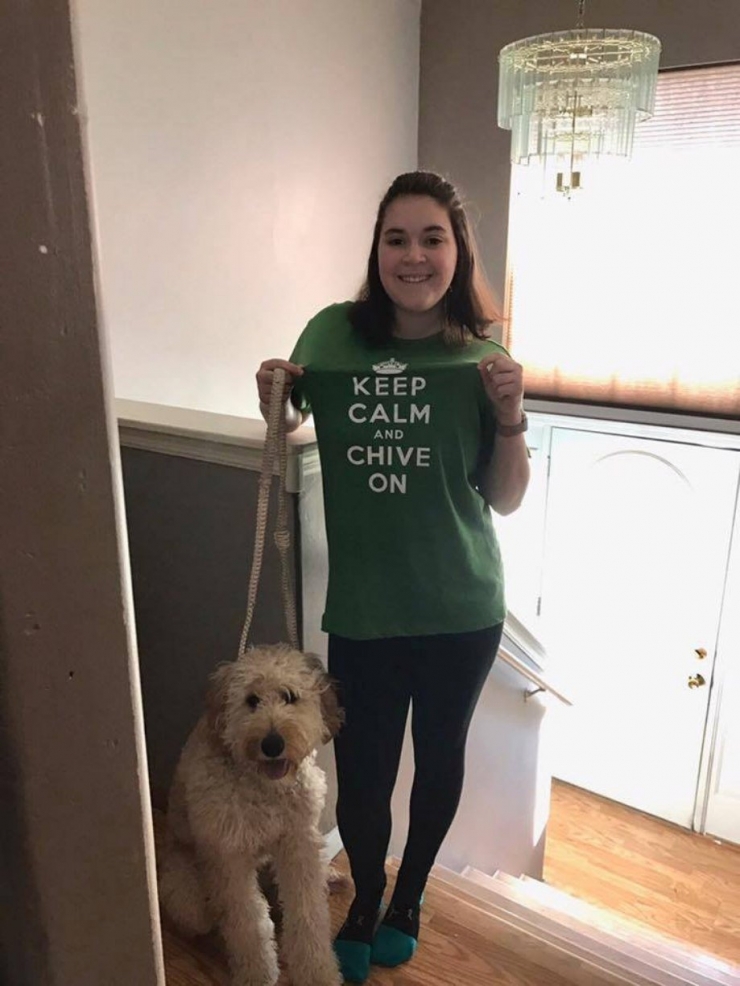 A teenager’s mind should explode with unrestrained possibilities for adventure. Instead, Kenze’s life now comes with a warning label, one which reads:

– Recommendation: Keep Kenze indoors and in a wheelchair to prevent fatigue and injury.

But none of this diagnosis accounts for human spirit. If you ask Kenze what she’s learned from her year, she says, “I’m stronger than I ever imagined. I was a good gymnast, John, strong. My body isn’t as strong anymore, but my mind is picking up the slack.” 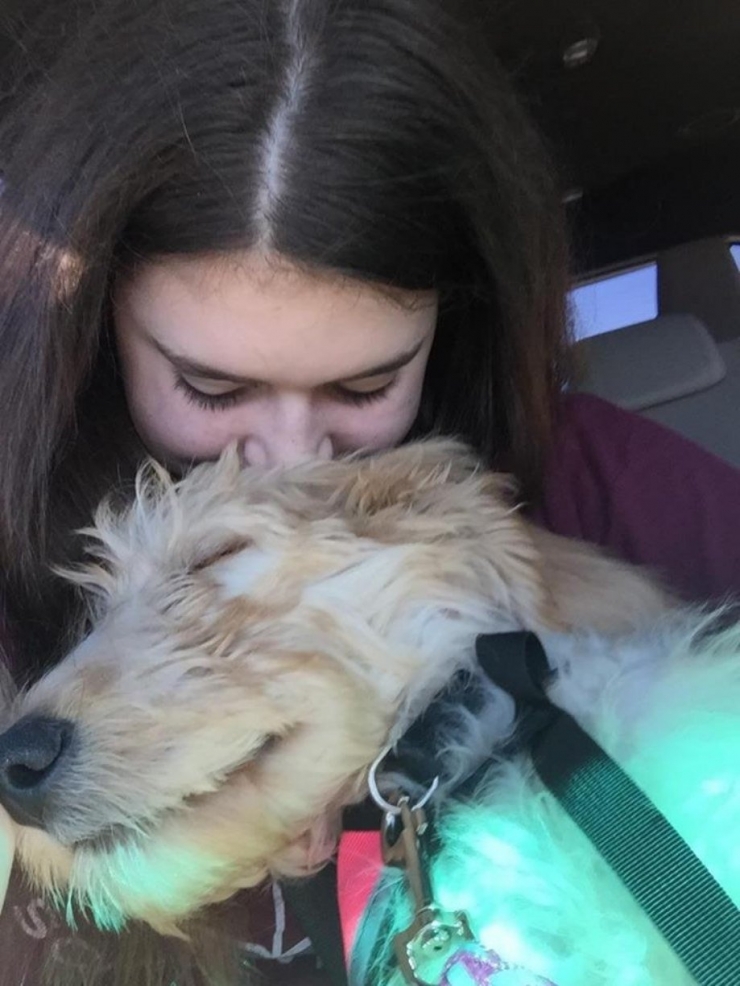 Before we departed, I asked Kenze if she was O.K., like really OK? Kenze’s head bowed, and in a low voice she said, “I must be honest, I want my old life back. I want to do everything a 15-year-old girl does. I want to go back to school, I want to see my friends more. Instead, I have this. It’s nightmarish. But I’m not giving up. I will go back to school, I will be a surgeon, just as I have always wanted to be.”

And I finally got it. “Whenever you fall down…”

“I get back up.” She didn’t quip this time. Her head was no longer down. I’m a fighter.

Let’s create a safe home for Kenze. The home needs major renovations as well as mold removal. New carpeting, floorboards, even walls where necessary. As the summer heat intensifies, time is of the essence. I’m setting the goal at $15,000 and I have no reason to believe the Chive community won’t absolutely destroy this goal. Anything beyond $15,000 will pay for Kenze’s university and help fulfill her lifelong dream to become a surgeon. Maybe after we save Kenze, it will be Kenze who saves one of us.

*I will be updating this post as the totals roll in today. The family has taken the day off work and they’re watching it all live. Also, if you do one other thing today, please explore the Green Ribbon Fund. This small group of leaders made all this possible. We are truly making the world 10% happier.

Please watch our exclusive video:10% Happier:
A Healthy Home for Kenze below! 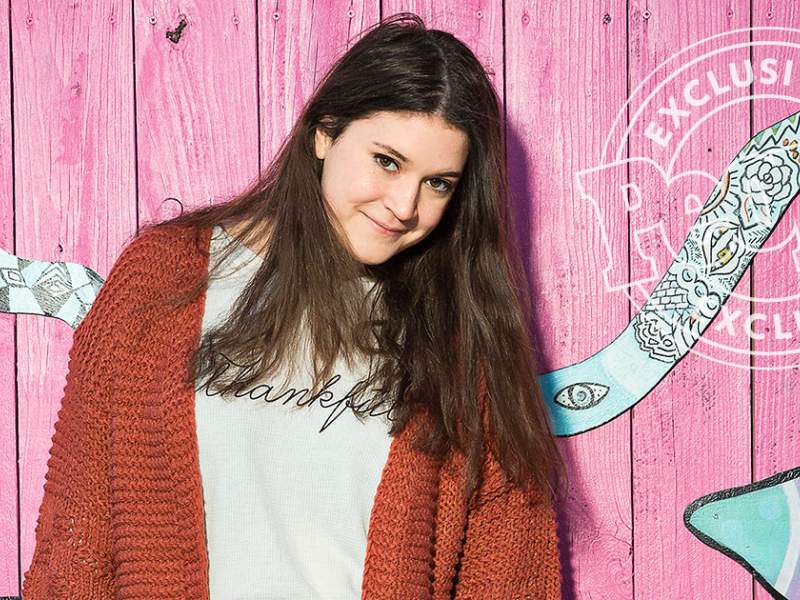 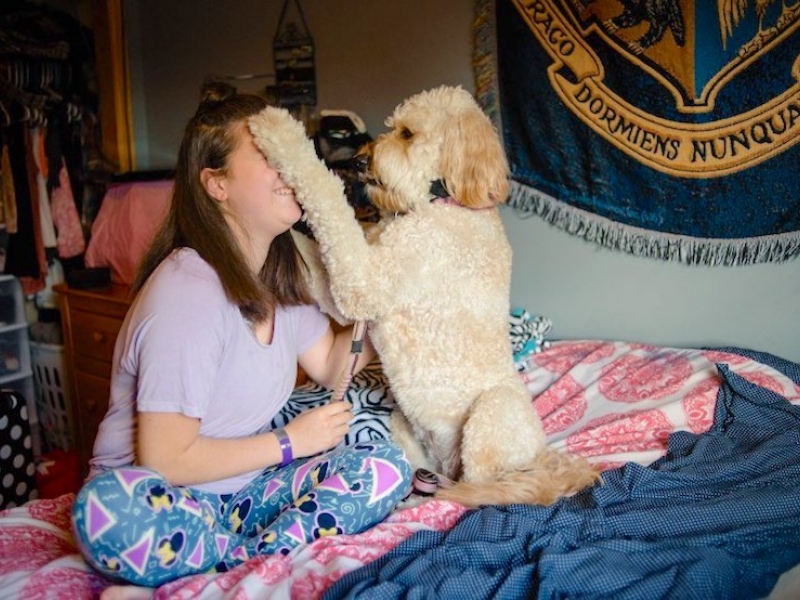 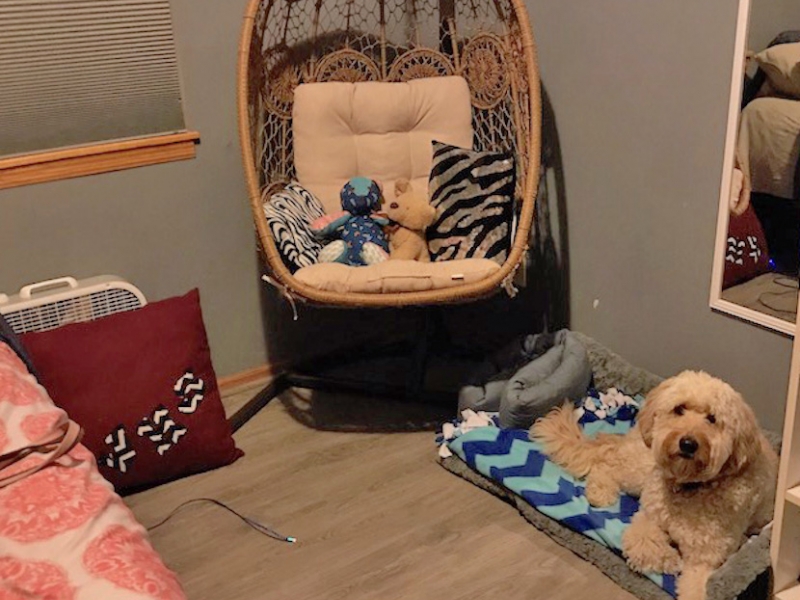