The lone survivor of a tragic crash, Billy has fought to regain mobility

It was a cold night in the dead of winter when Billy Wynne lifted off the helipad responding to a cardiac arrest call in the neighboring city of Watonga. Billy called his wife and told her he loved her. She was pregnant with their second child. It was February 22nd, 2013. Sitting next to Billy was 41 year-old nurse Chris Denning. In front of Chris was veteran pilot Mark Montgomery. In 60 seconds both of these men would be dead.

The EagleMed had just reached its cruising altitude of 500 feet when the helicopter began to shake violently. It became instantly apparent this was not turbulence when the pilot began muttering, “don’t do this.. don’t do this to me now.”

The engine died immediately, the helicopter began to fall.

It would take 10 seconds for the helicopter to impact the ground. In those precious seconds, the pilot searched for a place to land the helicopter. They spotted a tiny street below, only a quarter mile long but it was lit on both sides. Billy remembers the nurse, Chris patting the pilot on the back saying, "You got this, Mark, you got this.” Billy recalled the look on Mark’s face, "Mark knew he was about to die.” Billy remembered something Mark had told him about helicopters. No airborne machines are really made to crash, but helicopters definitely aren’t. The engine mount sits on top of the helicopter, the fuselage, full of jet fuel, rests below the helicopter in the belly.

In those final seconds, the pilot Mark Montgomery would exhaust every recourse he had, including a maneuver called an auto rotation, which would provide precious (albeit little) glide, to steer the helicopter in an aggressive 90 degree turn toward that tiny street. Billy remembers cinching his seatbelt tight. Mark would make the road. It was mostly empty that night, on one side of the street was a nursing home, the other side a retirement home.

Olga Areval, a cook a the nursing home was running 15 minutes late for work that night. Olga looked up in the sky and saw the helicopter. Maybe it’s coming to pick up one of the patients? Olga was known for her quick wit, and it would be her swift actions that night that would save Billy. Olga looked up again, No, that helicopter is about to crash!

Olga was already moving. Call 911? No, pull the fire alarm, help will get here faster. Olga ran into the building and pulled the fire alarm. Before running back outside, she grabbed a fire extinguisher.

The helicopter smashed into the tiny street at 40 mph on 20 degree angle, tilted slightly to the pilots side, killing Chris Denning and Mark Montgomery instantly. The belly of the helicopter and its fuel tank disintegrated and exploded only 9 inches below Billy’s seat. Covered in jet fuel, Billy was engulfed in flames.

Billy explained, “Jet fuel burns at such high temperatures I can’t imagine anybody getting close to the helicopter. But somebody actually did.” Olga could barely discern a helmet still moving in the inferno. She leveled the fire extinguisher in his direction and squeezed the handle. The flame retardant hit Billy and somehow Olga, with a the help of some bystanders, were able to pull Billy’s from the helicopter.

Billy’s entire body was charred, smoking, and still covered in jet fuel. When Billy was clear of the wreckage he looked up at Olga, they locked eyes. At that moment Billy’s body burst into flames again. His body’s exterior temperature was still so hot, the jet fuel reignited. Olga pumped the fire extinguisher… nothing, the Nitrogen was exhausted. Olga pulled off her coat and tried to smother the flames. Another cook sprinted from the kitchen with another fire extinguisher. It malfunctioned. Billy continued to burn, screaming for help. Finally, another cook arrived and extinguished Billy.

The crash left Billy’s body critically injured. His lumbar vertebrae (spine) was crushed. Most of his body was fractured, including his skull, clavicle, sternum, right arm, and ribs. His lungs were punctured and collapsed. He also broke his right femur, tibia, and fibula – basically, all the bones in his leg. His right ankle was crushed and fractured. Nearly every inch of his body was consumed by the flames. He suffered 3rd degree burns on his legs, arms, rear, and face. The burns on Billy’s left leg were so bad that six weeks after the accident it had to be amputated above the knee. His left fingers were also amputated.

Life in the hospital is never comfortable, but for a burn victim it’s hell. Your body becomes a farm of sorts. Every plot of unburned skin becomes a donor site. Skin is grafted and transplanted to the burned areas. Given that nearly 70% of Billy’s body was 2nd and 3rd degree burns, nearly every healthy plot on his body was grafted.

The pain from this degree of burn is often described as whiteout pain, the sort of pain that exists the margins right before blackout. You’re awake for this kind of pain. Your body remembers this pain. Even the ghosts of the limbs that were amputated remember, the phantom pain is often intense.

Seven weeks in the ICU and 60 lbs. lighter Billy was transferred to Zale Lipshy rehab hospital. While there Billy made small but significant progress. His blood pressure leveled out, he was even able to rock from side to side in his bed. It might not seem like much to us, but to those in the medical community these are the seedlings for a new life.

After four months, Billy was finally transferred back to the hospital where it all began, Integris Baptist. Upon his arrival the entire staff of EMT’s and doctors who helped save his life were there to greet him. The second day of his stay, Billy’s wife gave birth to their daughter on the floor right above him. Her name was Lily.

Things were good for a spell. Katy would visit with the kids everyday. But when they left, a profound sense of loneliness descended upon him. “I would wait for my family to leave and I would cry.” Billy was home but he wasn’t home. It was the summer of 2013. His wife had told him everything was finally in full bloom, she described the brilliant colors of all the flowers in their neighborhood.

Billy imagined himself hopping in a car and driving down the I-40 with the windows down. He could be at the doorstep of the home he built in 20 minutes hugging his children, reading them stories, being the father he desperately wanted to be. Billy drifted off every night thinking of home, encased in the white walls of his hospital room, a prisoner in his own body.

One morning Billy woke up and resolved to go home. At this point he could not yet sit up in bed on his own. Billy requested all the time with his physical therapist he could get and set a goal: “I’m going home in two weeks.”

One week later Billy finally sat up in his bed. At two weeks Billy pulled himself up and rested his frame on the edge of the hospital bed. He called his wife and asked her out on a date. Billy was going home.

I asked Billy what it’s like to wake up in the morning these days. He jokes,

“It feels like I woke up from being in a car wreck every night. The soreness, aches, and extreme tightness all over my body. The first thing, my wife helps me into the shower. She moves me to the shower bench and I sit down. The hot water seems to calm the nerve pain in my legs. My wife helps me out of the shower and helps me get dressed. I put the liner on my left stump and I start my day. The thing is, John, my wife does this for ALL of us. She gets us all out of bed, showers/bathes us, breakfast, clothes us, out the door for appointments, lunch, dinner, everybody ready for bed. Rinse. Repeat. She could use some help. She could use my help.”

I hope one day the pain goes away and I don’t know if that’s realistic or not, but I hope. But more than anything I want to be able to help my wife, she’s done so much for me… for us.

Making the pain go away: The Chivers enter Billy’s story:

Billy and the team at Chive Charities explored the options. The conversation narrowed on a specialized hydrotherapy pool. It would help Billy heal in a myriad of ways. For example, Billy’s right knee is a constant source of pain. But his ankle needs even more work. Without a pool, you often need to use the knee to exercise the ankle. The bouyency afforded by hydrotherapy allows Billy to exercise his ankle while giving his knee a break. Hydrotherapy also improves circulation in tight muscles and the warm water stimulates nerve regeneration. The sum total of this type of therapy helps to quiet the body.

Today we’re announcing that the Chive Fund is stepping in to ease Billy’s pain. Billy is the recipient of an $85,000 grant from the Chive Fund for a customized hydrotherapy pool. We’re going to help increase Billy’s mobility just a little bit every day. And it’s going to add up.

But we also want to enhance Billy’s mobility, and in turn, his family’s ability to get around. Katy has been shouldering the load of family duties for so long now.

Billy has launced a GoFundMe campaign to raise money for a brand new 2014 Toyota FJ Cruiser. Initially, Billy thought since he still has his right leg that he’d be able to drive a standard truck. However, due to the lack of feeling he has in his right foot, it’s not possible for him to safely use the pedals. To solve this problem, the truck will have adaptive hand controls. 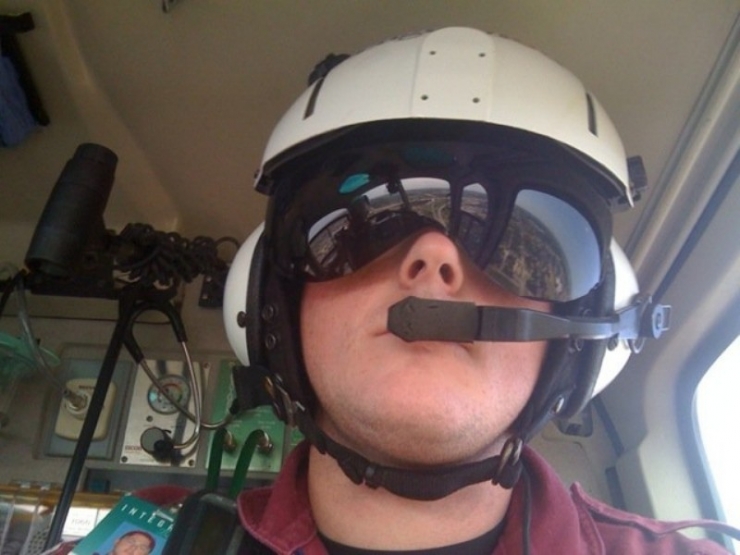 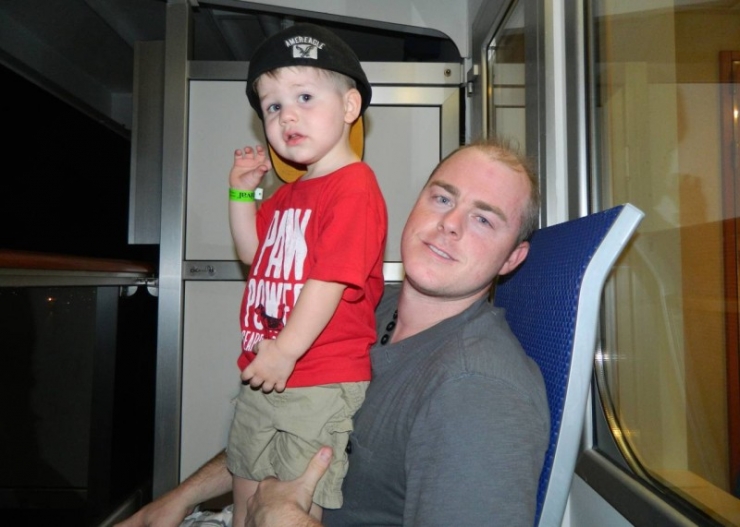 Billy with his son Nicholas before the crash. 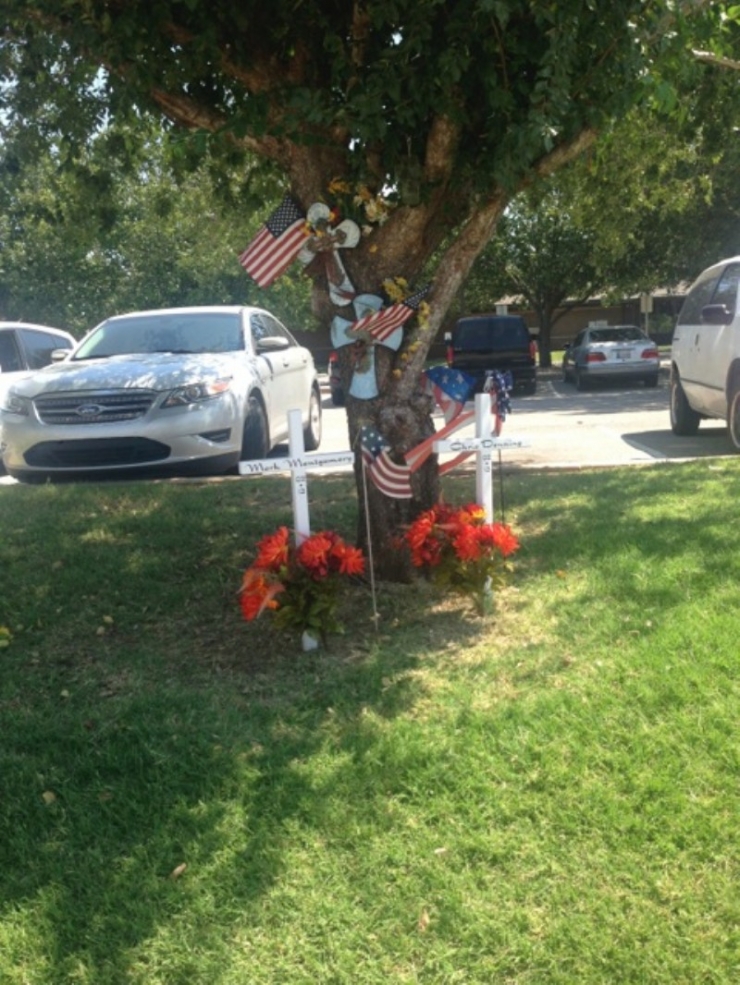 A memorial to Chris Denning and Mark Montgomery at the site of the crash. 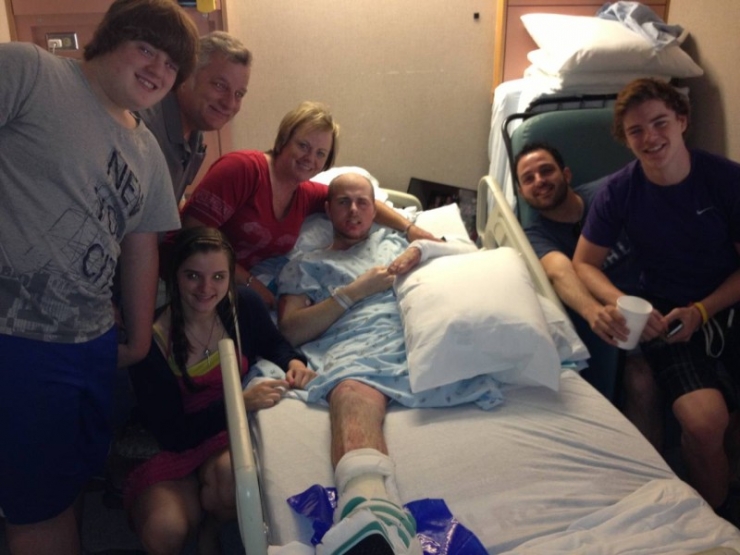 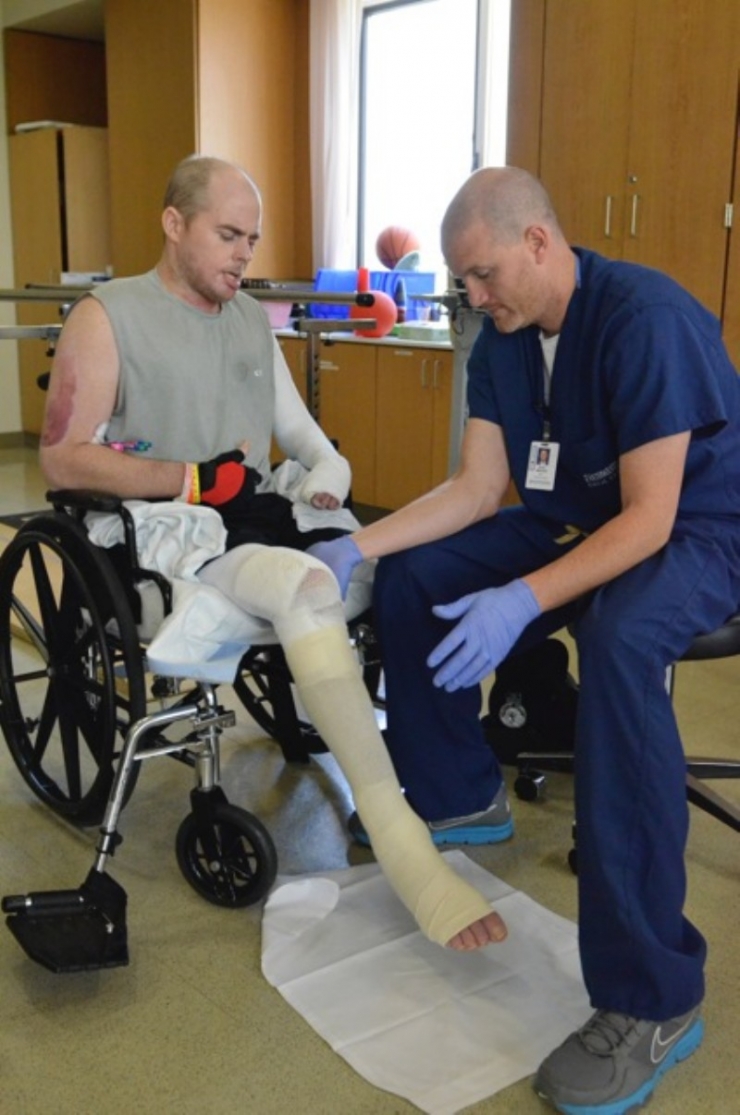 The long road to rehab begins... 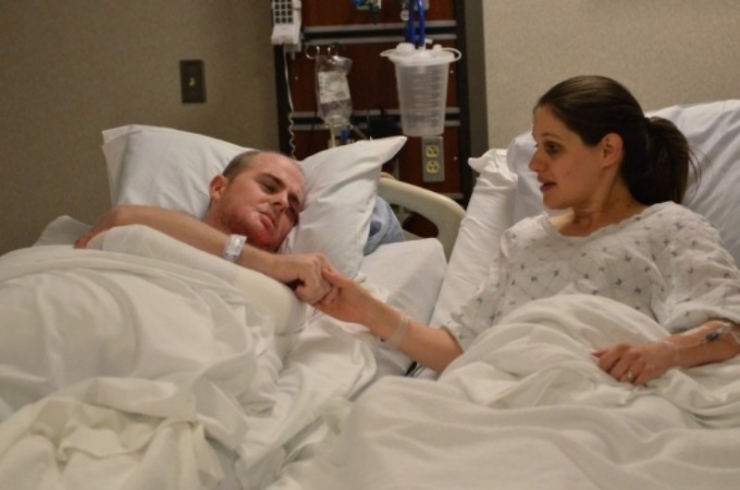 Mom and Dad together in the hospital. 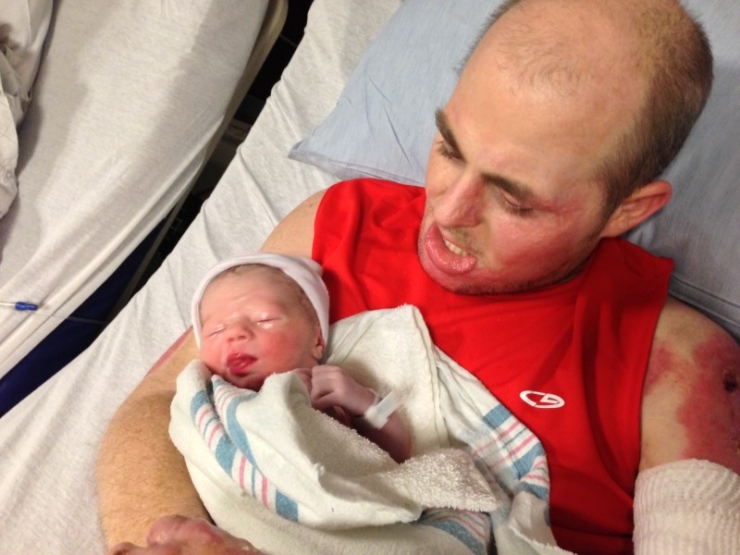 Billy holds his daughter, Lily, for the first time. 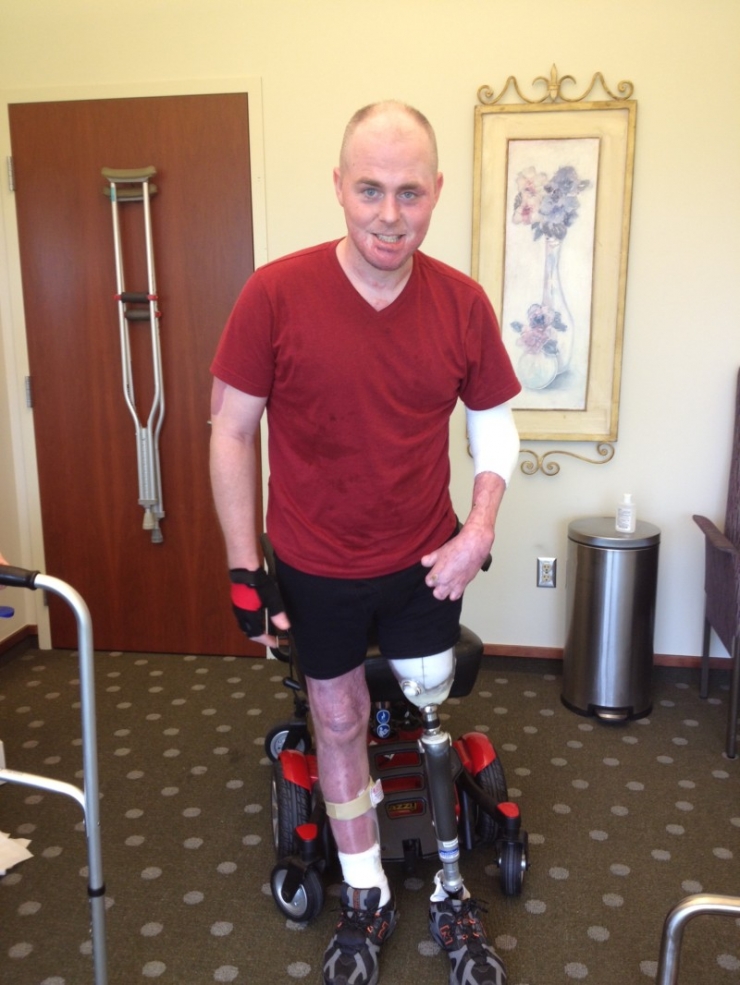 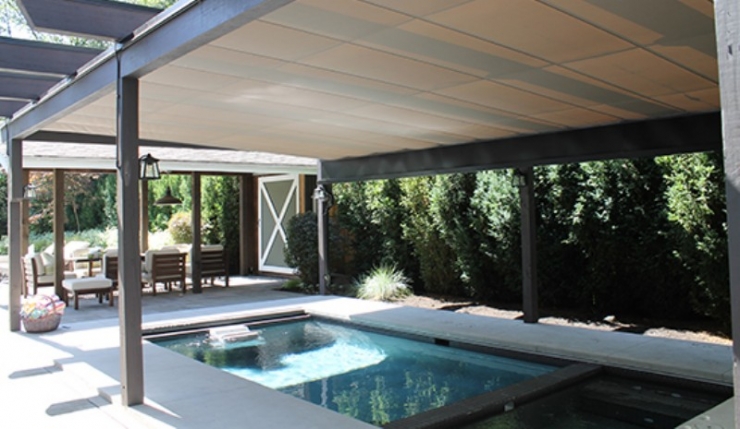 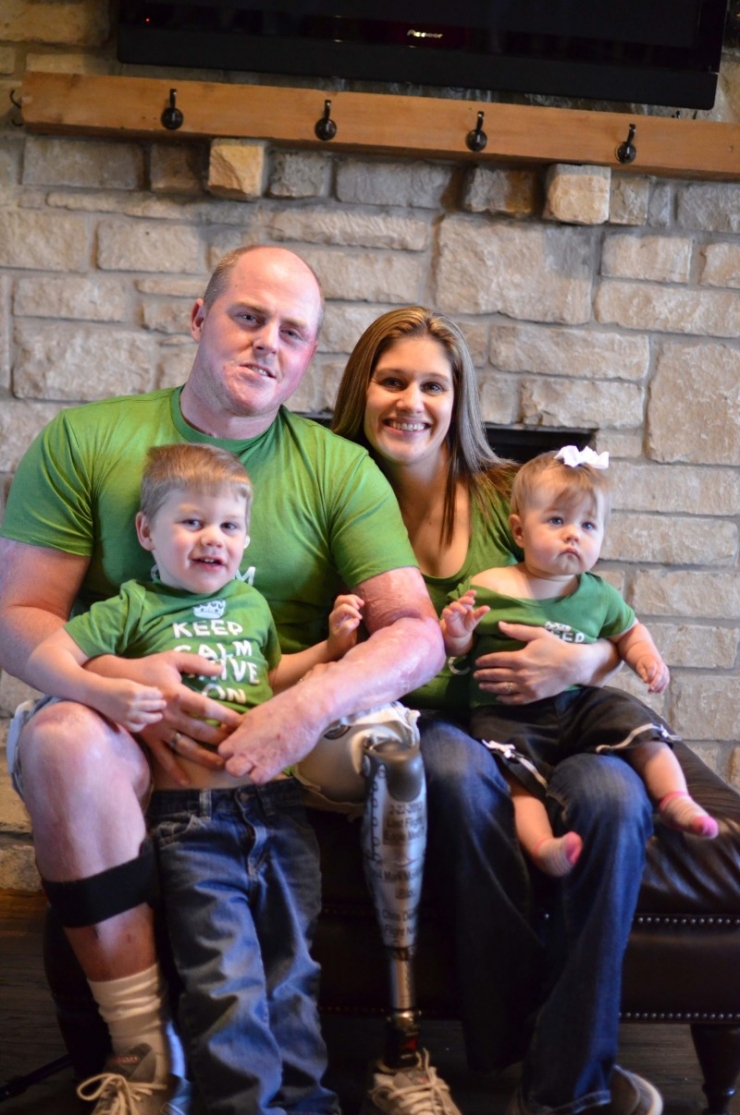 I asked Billy on the phone a couple weeks ago what he really wanted from his life. At the time, he didn’t respond. “Let me think about that, John.” He emailed me a couple days later. The email read, “I want to be able to hold Lily’s hand while she’s learning to walk without fear that I’ll fall down.”

Billy is frustrated by how his injuries have limited him. He told me he fears that life is passing him by, “I don’t want to spend another summer inside. I missed last summer. I don’t want to miss another” It’s time to help Billy shed those limitations. The hydrotherapy will will strengthen Billy’s ankle, allowing him to free himself from the confines of his wheelchair and walk side by side with his daughter.

The new truck with hand controls will not only help Billy get to his medical appointments, but he will be able to transport his children to their activities. This truck is going to help balance the load of duties his amazing wife has shouldered for years now. 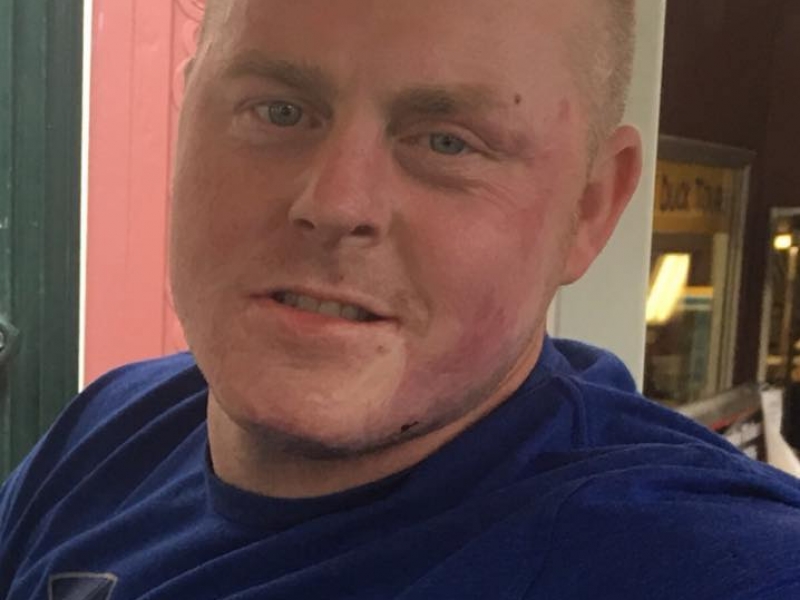 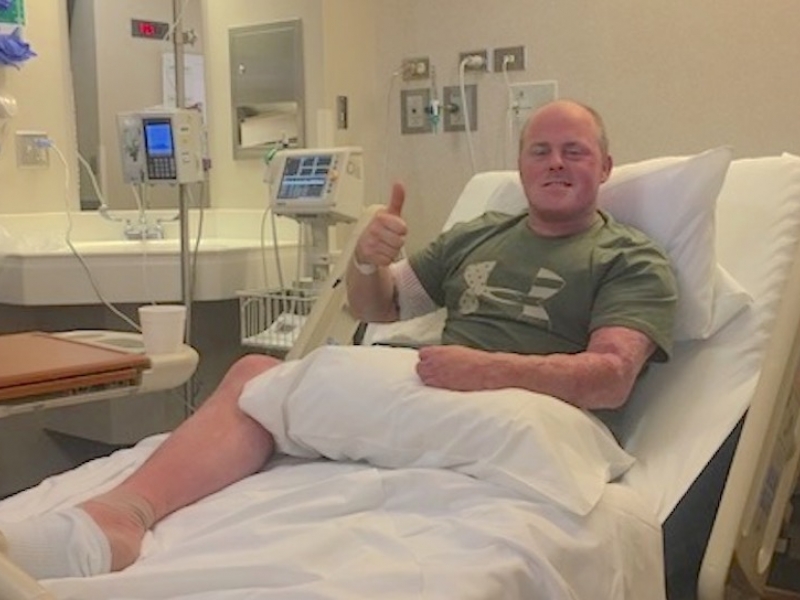 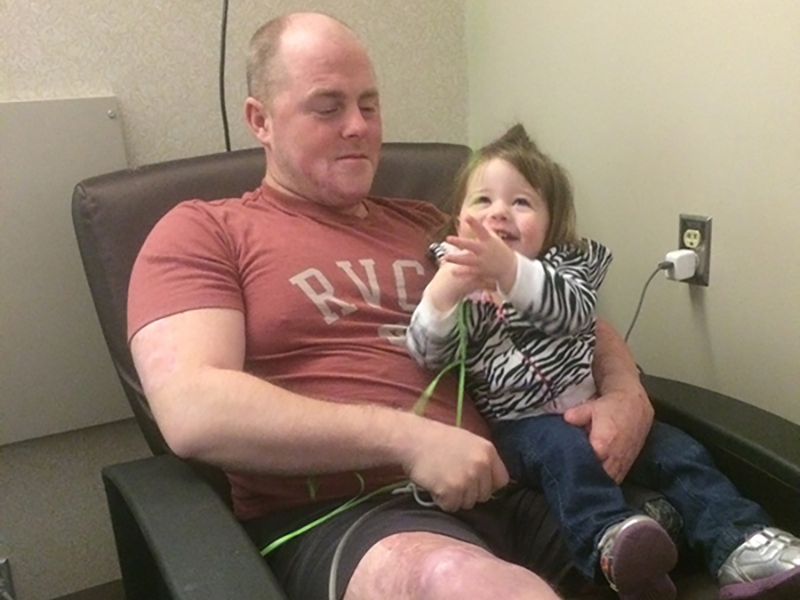