The good and the bad

The good and the bad. Yin and yang. Darkness and light. We tentatively hover between both, some days coming out on top, and others just happy to make it through. A day-to-day, month-to-month, year-to-year balancing act. 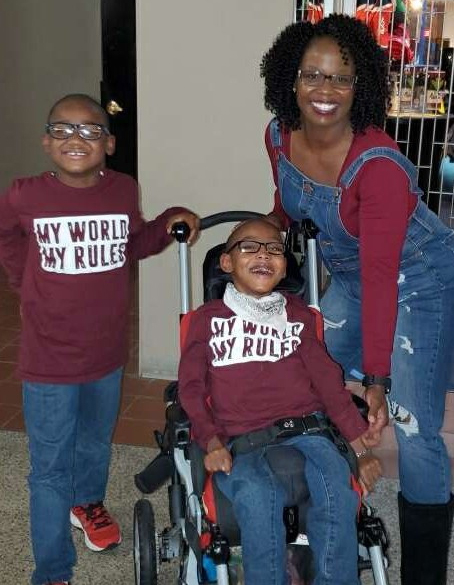 You don’t have to tell Amy Parker-Stayton about balance.

Eight years ago, she was visiting doctors and undergoing testing for various medical conditions all in the pursuit of having a child. In January 2012, she was told she had less than a 20% chance of conceiving due to scar tissue and damage to one of her ovaries. However, unbeknownst to her, she was actually already pregnant at that very same appointment. 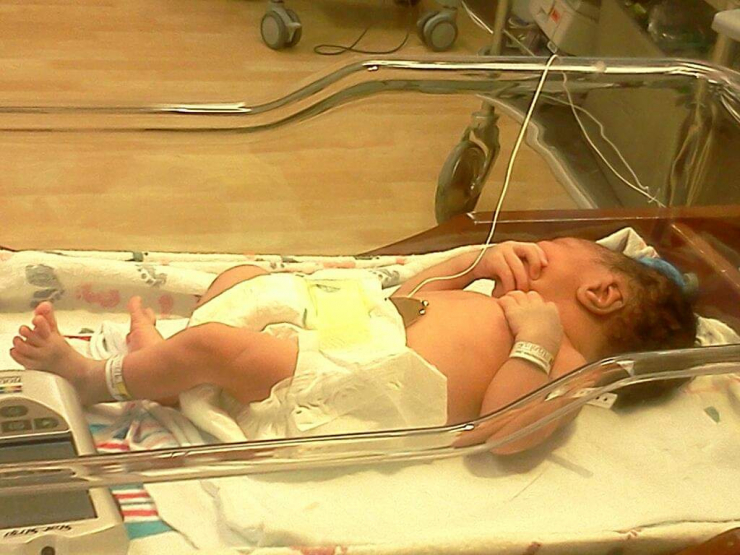 At approximately seven weeks, she experienced some bleeding and went to the hospital for treatment. The news was even more than she expected: she was pregnant with twins - a huge shock in itself - but one was considered a “blighted ovum” (a condition that occurs when a gestational sac develops without an embryo) and would never develop. Amy was completely devastated.

Thankfully, that initial doctor was wrong and her next ultrasound showed two strong and healthy heartbeats. Amy’s twin boys were alive and well, and Christian and Christopher would be born at 36 weeks, two days with only a minor case of jaundice between them. 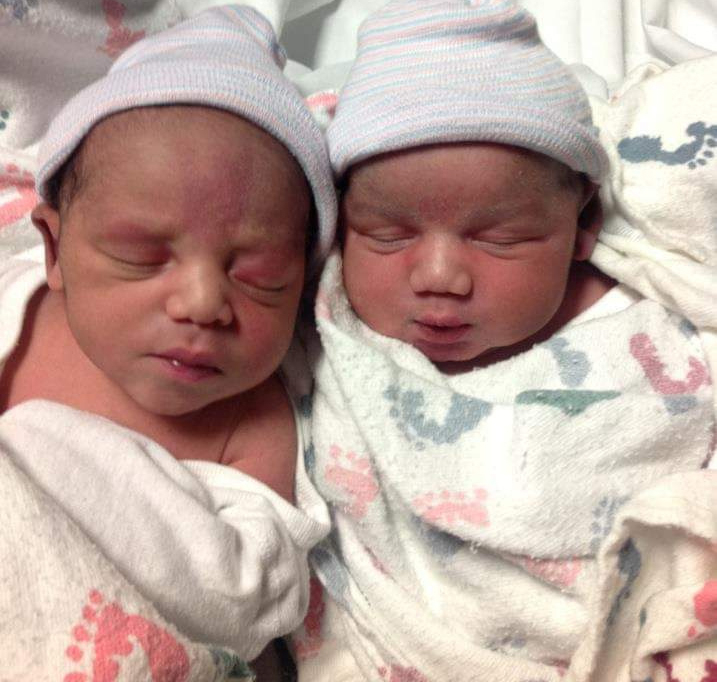 And still there was Amy, teetering back and forth between her greatest hopes and her greatest fears. The good news (no pun intended) is that she’s incredibly adept at handling a heavy load.

A U.S. Army Veteran, Amy went to basic training at age 26 with a bachelor’s and master's degree already in-hand. She would spend 12 years in the Reserves while pursuing a competitive and taxing career with the St. Louis Police Department. Listening to her recount her years of service in law enforcement, we had a difficult time imagining the good, though we know it was there. 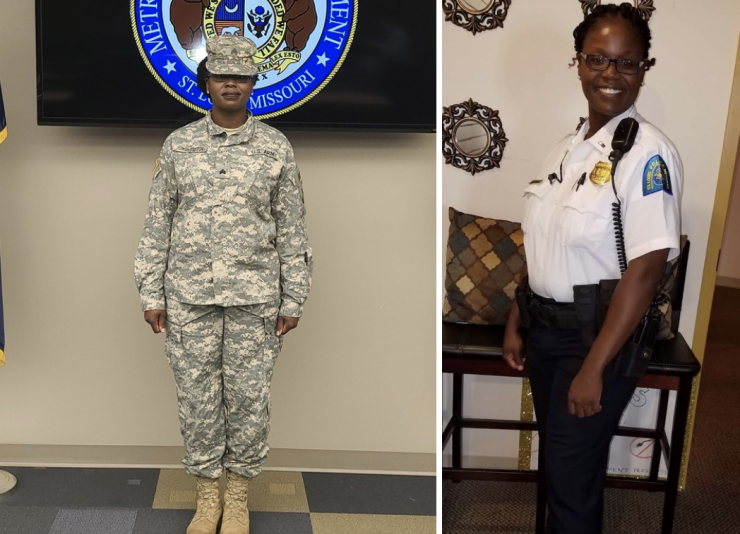 Amy has faithfully served with the St. Louis Police Department for nearly 19 years now, and while she’s seen more than she ever wanted to, she’s also impacted more lives than she ever imagined. 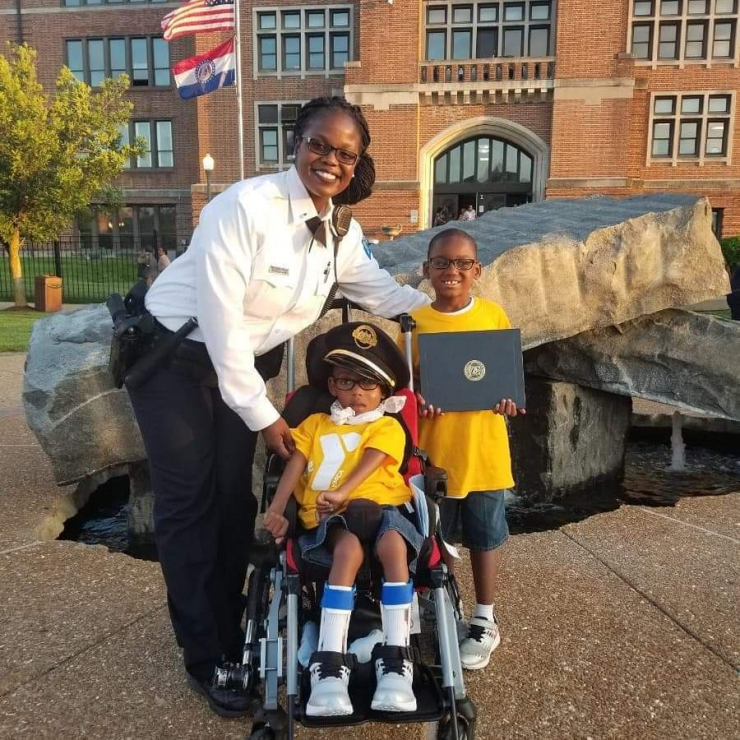 The darkness and the light.

While all of this was happening - while Amy was serving her country, then serving the citizens of St. Louis - she was also serving as a full-time mother and caregiver for her two sons.

That initial jaundice diagnosis, the only issue detected after their birth, would not be the last. In the months leading to his first birthday, Amy had noticed that Christian wasn’t developing at the same pace as his twin brother, Christopher. 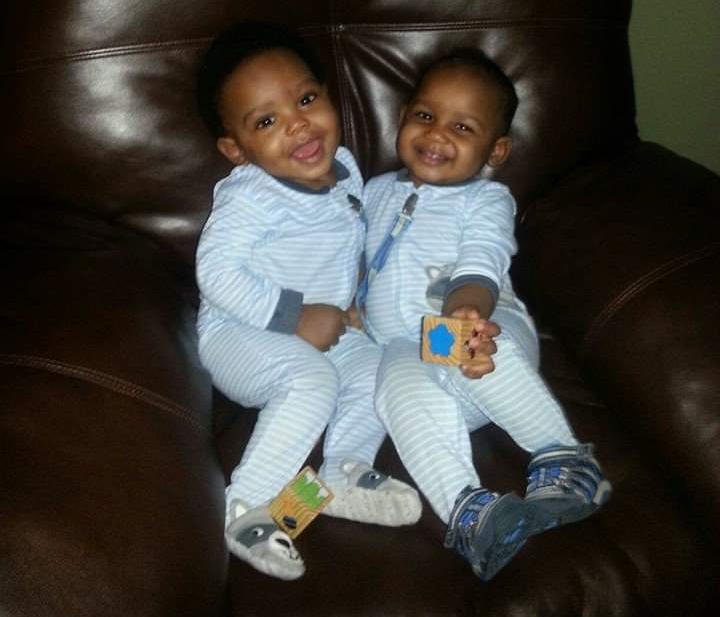 After one particularly concerning incident at a pediatric wellness check, Christian was referred to a neurologist for additional testing, including CT scans, MRI’s, blood tests, and genetic screening. At nine months old, he was diagnosed with cerebral palsy, likely the result of uterine trauma before his birth. 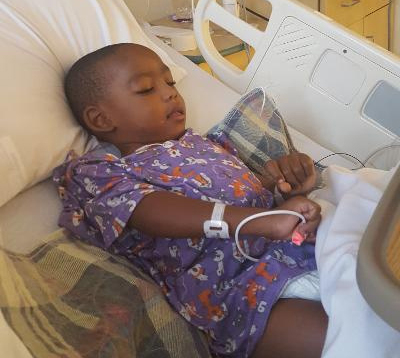 “Needless to say, Christian’s diagnosis was life-changing,” Amy recounted. “When I discovered I was having twins, I dreamt of them playing together, attending the same schools, and accomplishing goals in life together. My faith was challenged.”

“As a police officer, I had observed women who were abused, abused themselves, or didn’t take care of themselves while pregnant,” she continued. “I considered myself a good person and questioned why I had been chosen to have a special needs child. I soon recovered from those feelings and realized that I had to become Christian’s advocate because he was not able to advocate for himself.” 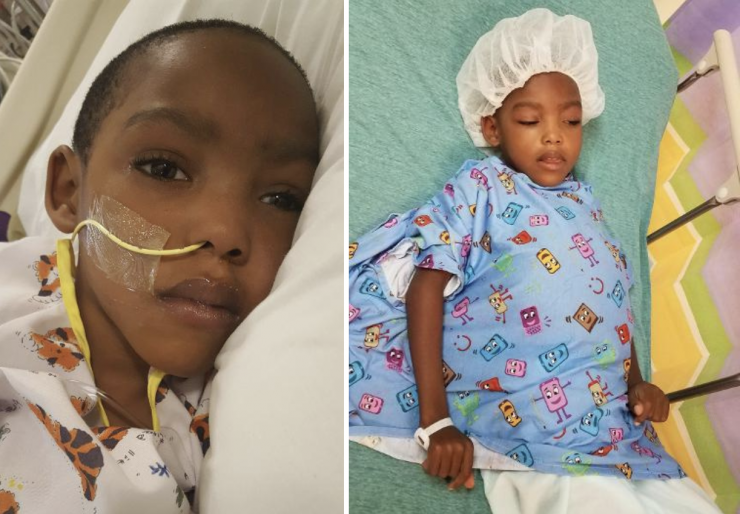 Like their mom, these twins are something special and their bond is inspiring. 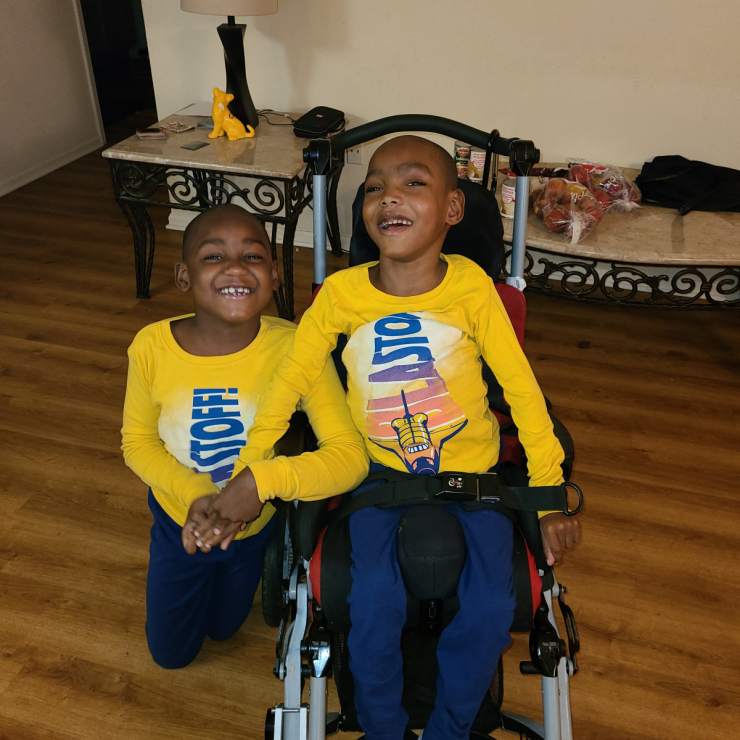 Although Christian does not walk or talk, he knows how to communicate. He loves to do all the activities a kid his age enjoys, including watching his favorite television shows, riding roller coasters, swimming, skiing, painting, and traveling. 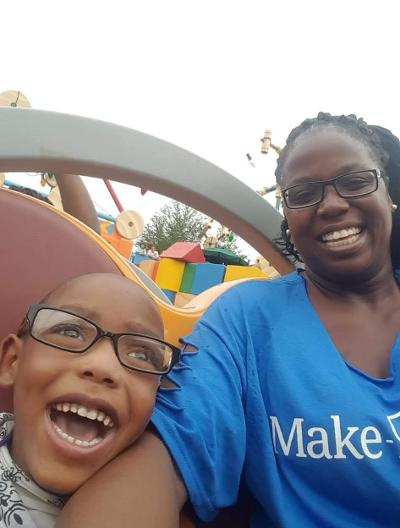 He likes to be treated like other children and can participate in most activities with adaptations and assistance. And most of all, Christian loves to be with Christopher. 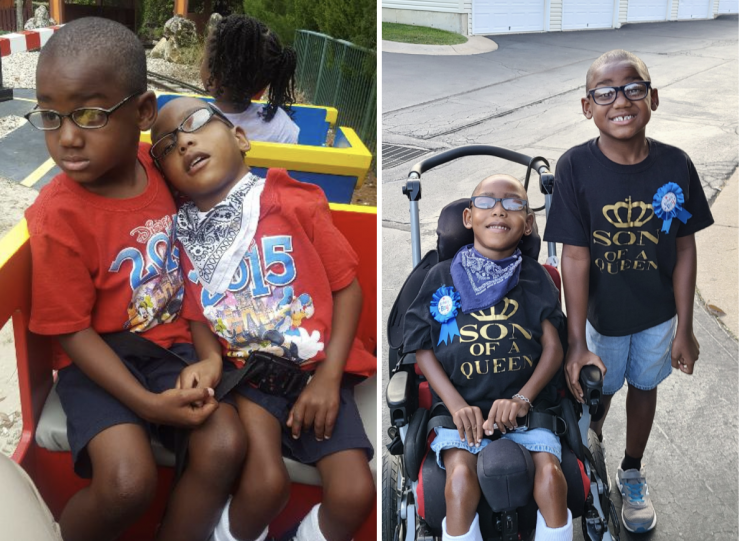 He also has a pretty good sense of humor. 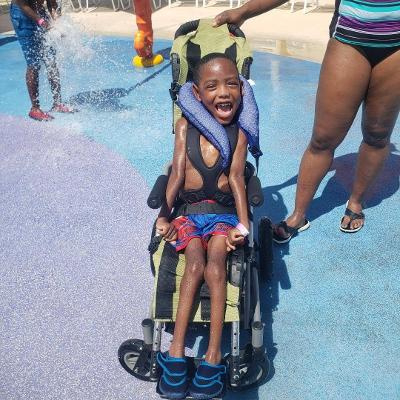 It’s been just the three of them for the last two years or so. In addition to all of the other ways Amy is a total inspiration, she also manages her full-time career and full-time parenting without the help of parents on either side.

“There's a limited amount of family capable and willing to help care for Christian,” Amy told us. “In addition to his 24-hour care, Christian also attends therapy, school, and doctor appointments, plus fun trips to do the things he loves. Currently, his transportation requires him to be lifted in and out of the vehicle, then transferred from his wheelchair to his car seat.” 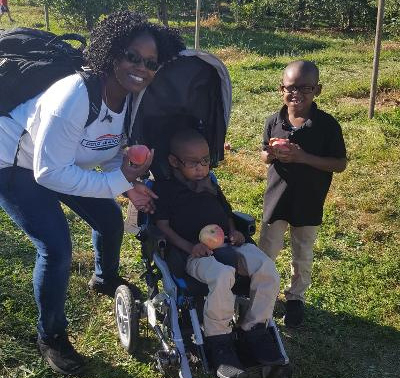 That sounds like a lot more bad than good.

As always, Amy was on it. She immediately realized this was not conducive to a happy family experience and purchased a new van for her and the boys. Converting it to a wheelchair-accessible vehicle, though, was another story.

ADA vans are the most highly-requested Chive Charities grant item. It’s no surprise why. With price tags in the $45,000 - $60,000 range, it’s not something that most families are able to afford (especially with all the costs associated with complex medical care).

When families can’t foot the bill for a new wheelchair-accessible vehicle, most look to conversions - just like Amy. Still, the costs can be prohibitive, ranging from $10,000 - $30,000 with numerous factors and stipulations to consider. 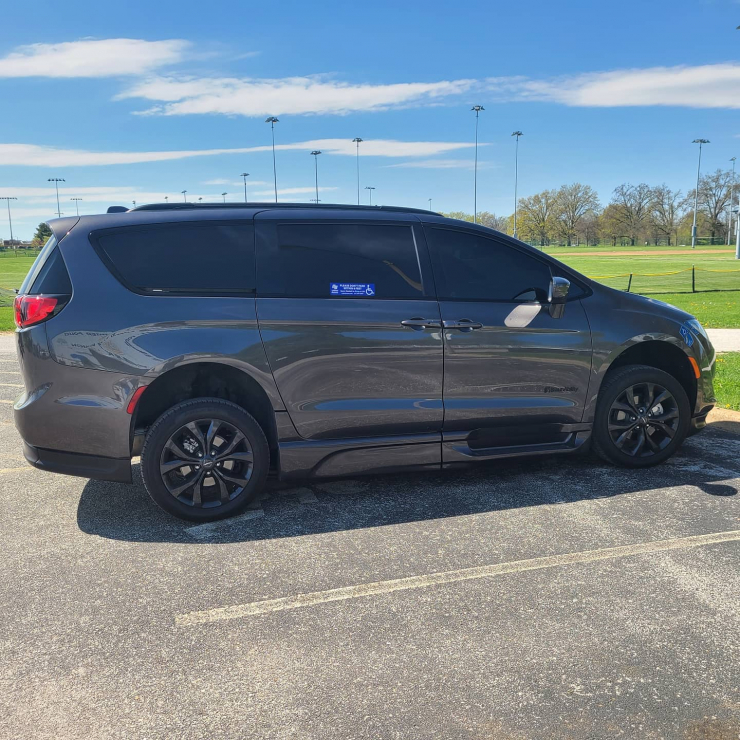 It’s why so many recipients find Chive Charities. We’re in the business of turning the bad to good.

So, when Amy and her twin boys needed help covering the cost of the van conversion, we took a look at her story and immediately saw a connection to everything we do: Serving veterans, first responders and rare medical diagnosees. Amy and her family just happen to check all three boxes (not a requirement, by the way).

It was time to tip the balance back to the good for a while. With the help of our Green Ribbon Fund - which you can join RIGHT HERE - we were able to convert their 2020 Chrysler Pacifica into what the boys affectionately call, “the spaceship,” for a total impact of $17,498. 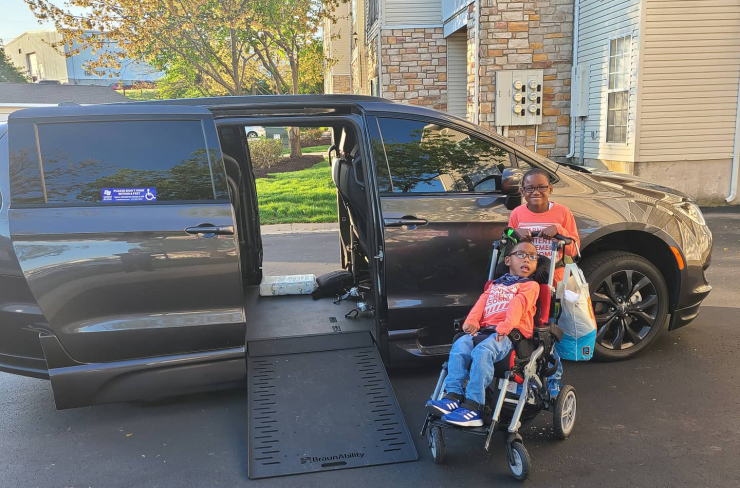 In true brotherly fashion, Christopher immediately learned how to safely secure the wheelchair straps so he can help get his brother in and out of the van for all the adventures to come. We imagine there will be even more of those now, thanks to you. 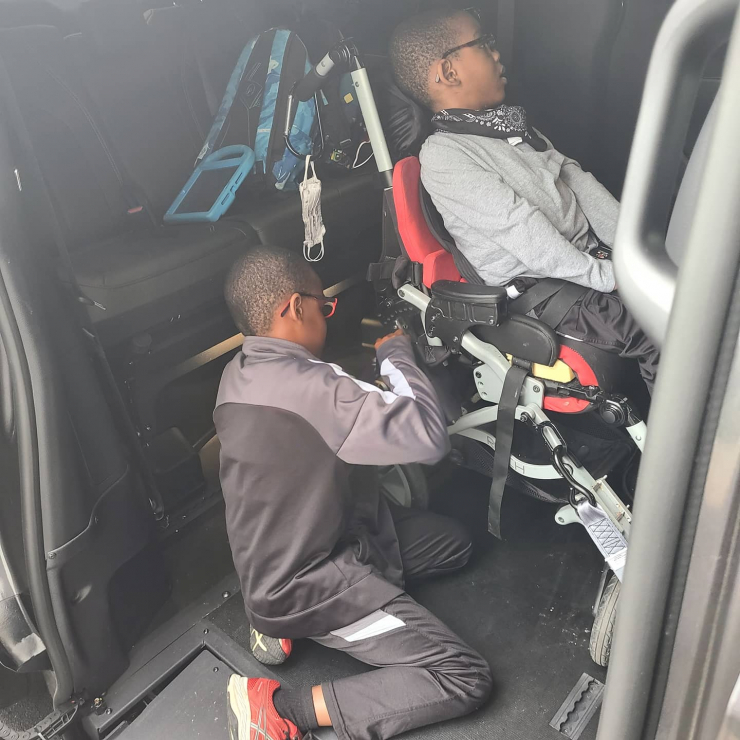 “This Chive Charities grant made the impossible possible,” Amy told us. “Thank you to all the donors for your generous gifts that changed our lives.”

Championing the underdog. Tipping the scales from just making it through to coming out on top. Making the world 10% happier. Because of donors like you, these aren’t just catchy slogans or phrases to make ourselves feel good. This is life-changing impact, 442 recipients strong. With your donation, we can make it 443.