A Great Story, a hacked wallet, and the day that changed Evelyn’s life

an ADA van from AMS vans, a car seat, mobility items, rent for one year, and therapy items.

We pulled our chairs closer together, hovering over the open laptop and watching as the Zoom video began. A bright and cheerful face filled the screen, a hand flashing into view to wipe a tired eye. There was a brief pause, followed by a rush of words that would forever change the lives of one special family…“Sarah, your daughter Evelyn is getting her van.”

A few weeks before that moment, the Chive Charities team sat in front of a different screen staring at the same big brown eyes of a small toddler with a heartbreaking stare, her gaze leveled at us with a look that said, “I need your help.” Evelyn was in desperate need of a wheelchair-accessible van and her mom, Sarah, didn’t know where else to turn. Her social worker had a single name: Chive Charities. 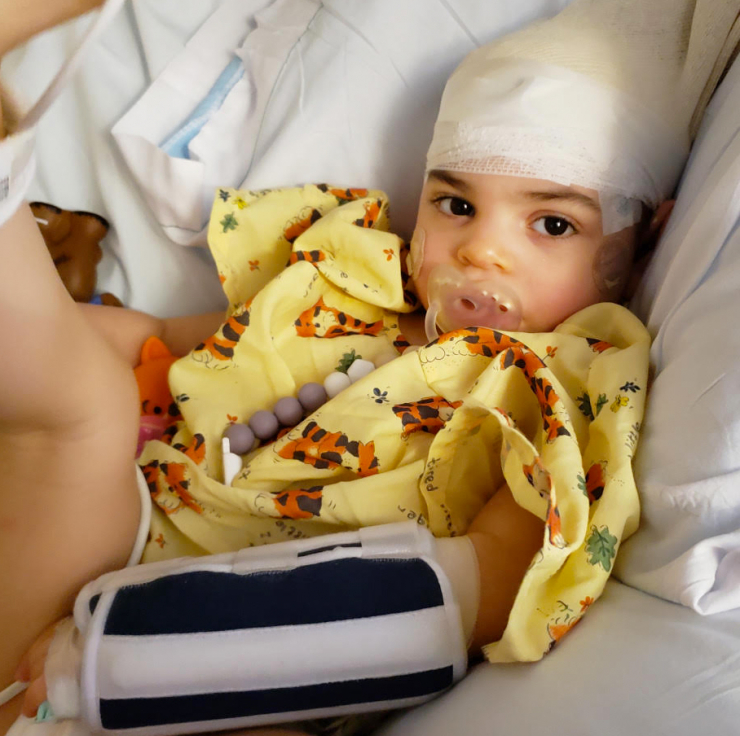 There was just one problem. We had just approved the next quarter of grant recipients (and hit a record number in designated funding) and we weren’t sure how we would be able to fund it. We were looking at her application and the photos of those big, brown eyes when John Resig came into the room.

He pointed to her photo and said, “I think we could help her through the Bill Murray NFT auction.” That quick and an idea was born. 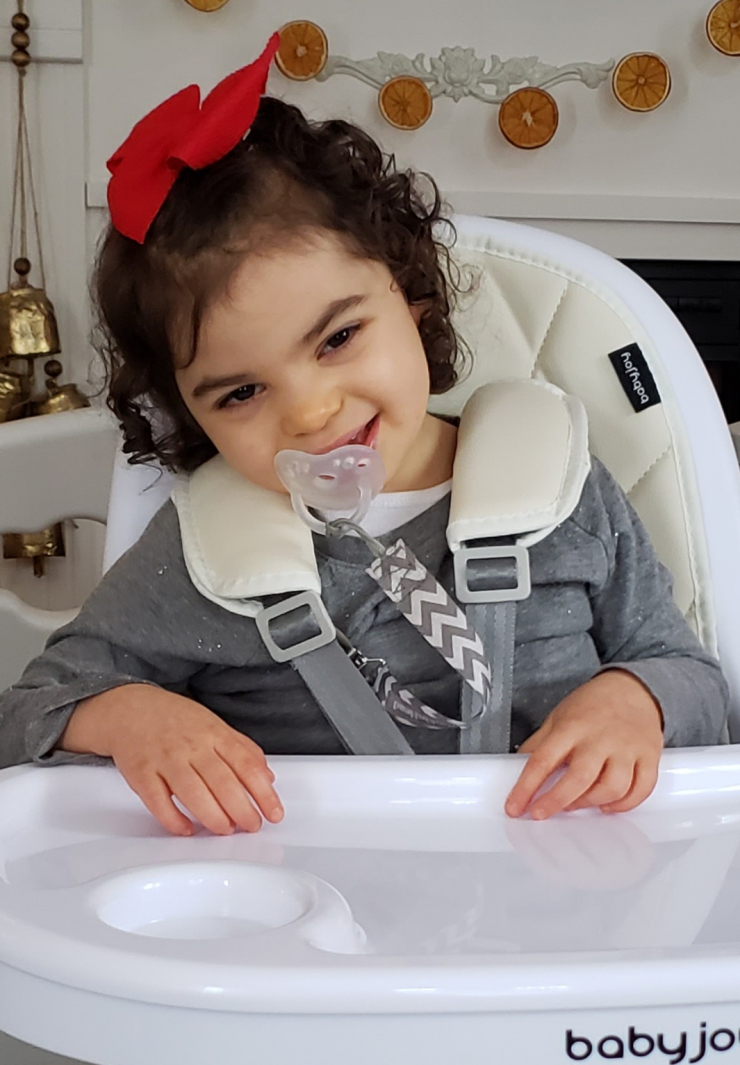 As we learned more about 3-year-old Evelyn and her incredible journey, we were stunned. She was born with an ultra-rare genetic condition called CLDN5, and at the time of her diagnosis, Evelyn was one of just eight known cases of the variant in the world. One of eight.

Evelyn’s growing list of diagnoses included microcephaly, feeding difficulties, seizures, and some small, emerging delays. Although her seizures didn’t occur daily, they were very prolonged and hard to break and required several rescue medications to stop them.

Then came October 20, 2019. Evelyn had such a severe, hard-to-break seizure that she stopped breathing. Many doctors, nurses, and support teams rushed into her hospital room. Sarah saw the worried looks and heard the panic in the medical teams’ voices as they asked for the hospital chaplain. Evelyn was just shy of her first birthday. 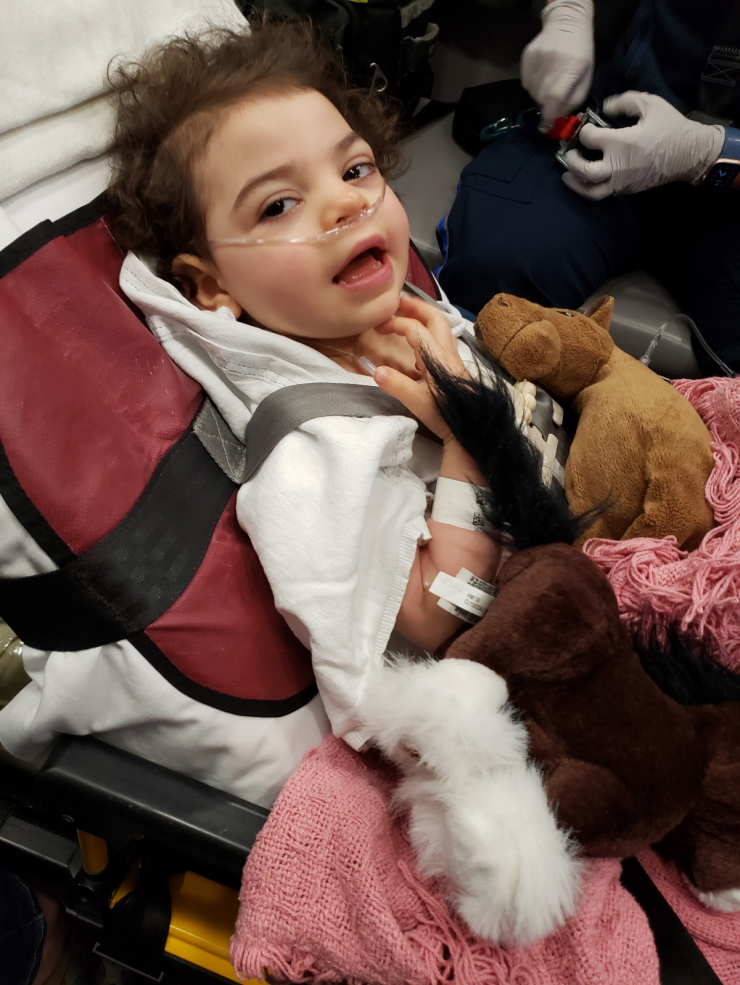 “Sitting in the ICU with my baby on life support — with no clear answer as to the cause of her medical issues — was beyond description,” said Sarah. “We knew she needed further genetic testing to get to the cause of her medical issues, but while we waited for the results, we were falling further down the rabbit hole of life with a medically complex child.

“Our daily life became a blur of therapies, appointments, equipment, medications, worry, fear, hospital stays, and endless ER trips…as well as advocating as hard as we could for anything needed to help Evelyn.” 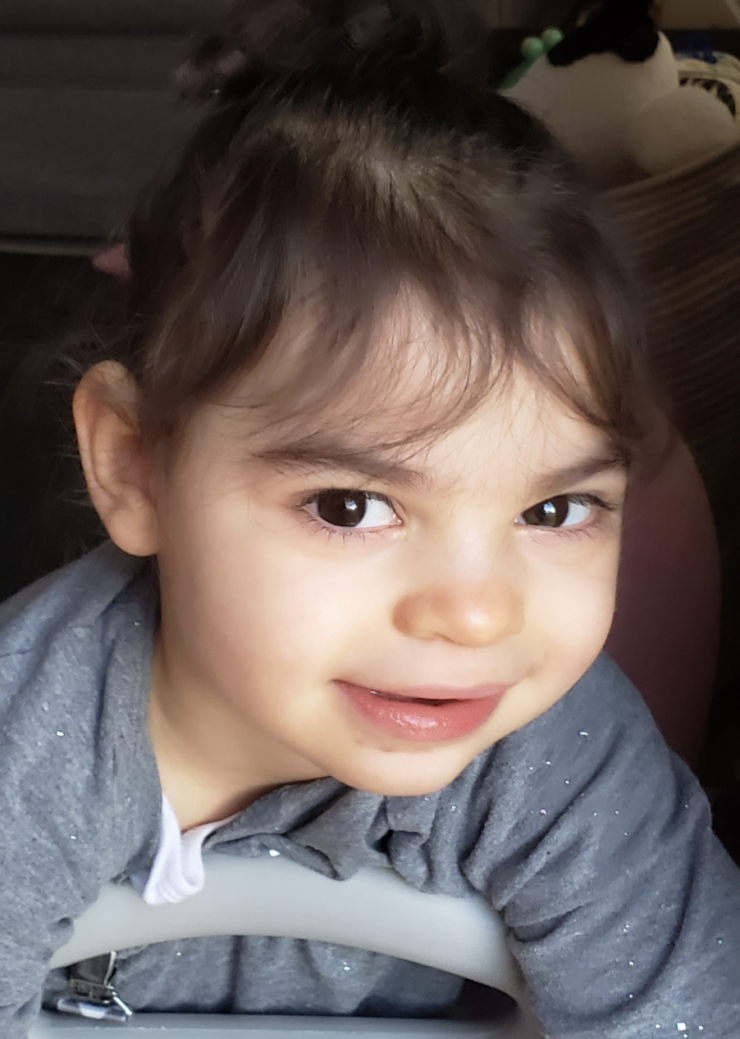 As Sarah reeled with the gravity of her daughter’s rare diagnosis, Evelyn’s dad refused to accept the results or the seriousness of her emerging disabilities. Eventually, he became a hindrance to her care, then he and Sarah made the choice to separate after an almost 21-year relationship.

“I needed a partner and a supportive ally to face the unknown ahead, not another challenge,” said Sarah. “Initially, there was some involvement and financial support, but it just abruptly stopped. He has only seen Evelyn and her sister three times in the past two years. So there I sat with a new diagnosis, a new household dynamic, and a whole lot of anxiety.”

Sarah tried to get back on her feet while single-parenting two daughters and navigating the intricacies of life with a medically fragile child. The days were long, but Evelyn’s sweet smile and cheerful disposition brightened every moment. They were getting by, adjusting to the new normal of life as a family of three. 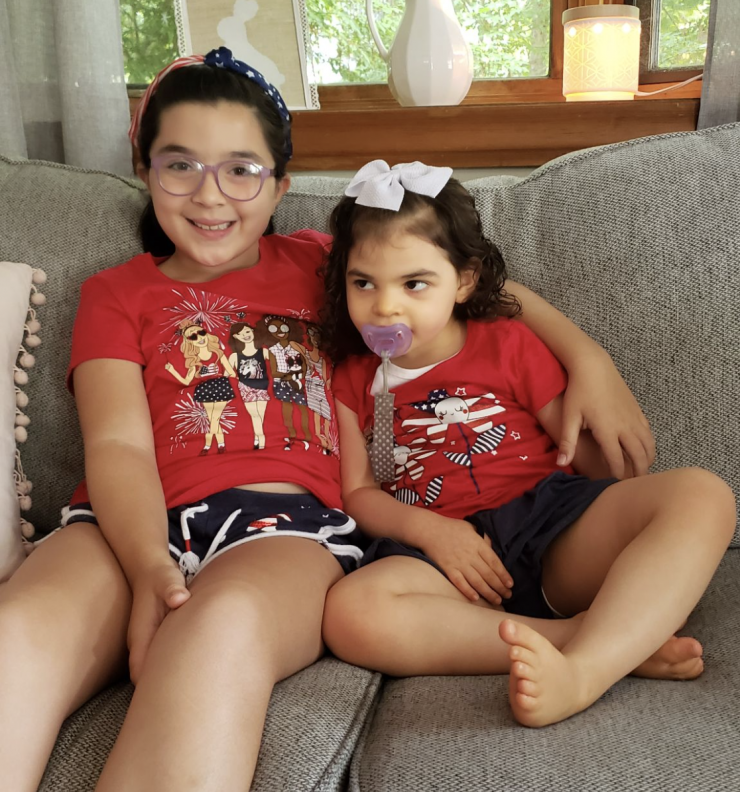 Then came another blow.

The truck the family had for years was taken in October secondary to non-payment. It was agreed upon as part of support by Evelyn’s father to have the truck paid for. However, when all contact and support stopped on his end, that included the truck payments. Sarah and her daughters were left without reliable transportation and virtually no way to get to and from her critical medical appointments. That’s when the social worker mentioned Chive Charities.

The events that transpired after that are nothing short of amazing. 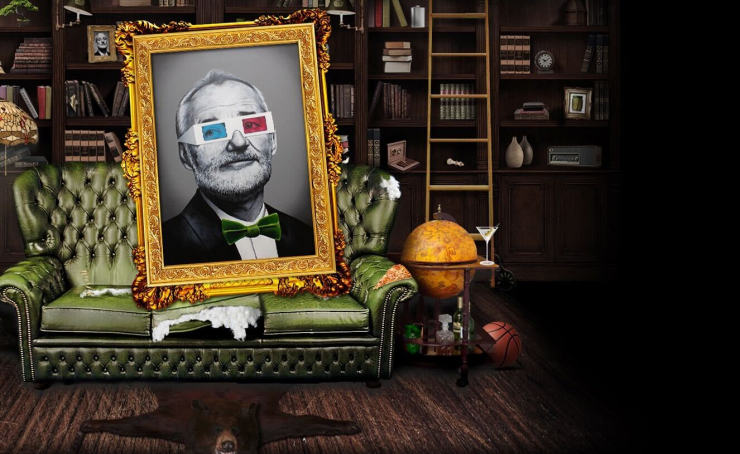 We knew the auction of the Bill Murray NFT #000 and the original painting, “A Great Story” had the potential for an incredible impact on our organization and recipients. We were thrilled to be chosen as the benefiting charity with 100% of proceeds from the auction designated to help more of our recipients. After we read Evelyn’s story and saw their tremendous need, she was selected as the first recipient that Bill Murray, The Shack, and Chive Charities would help. 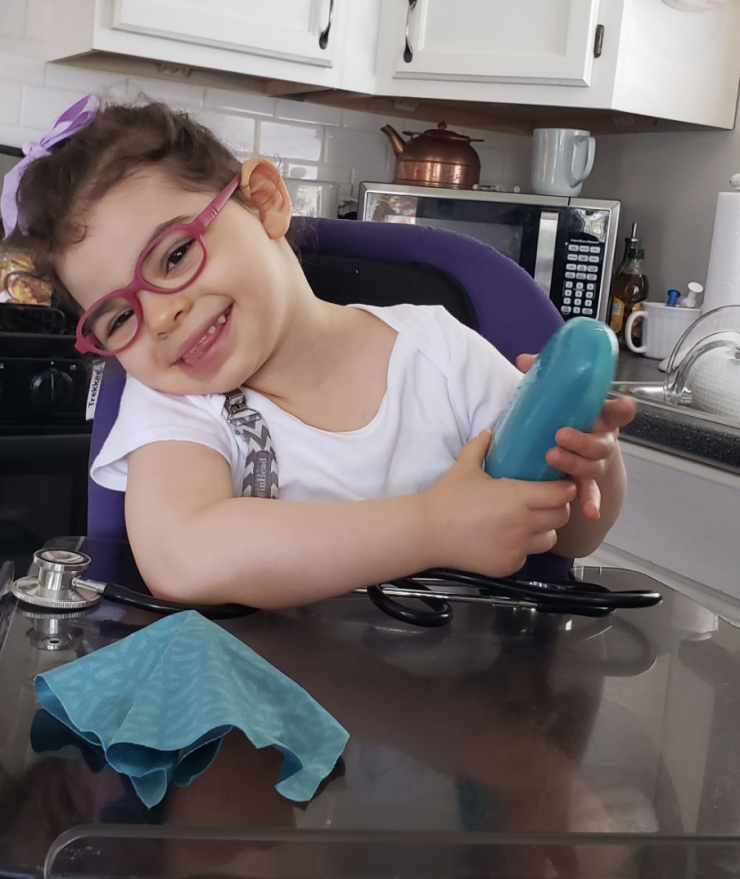 Last week, that auction exceeded all of our expectations.

In 24 hours and 1 Murray Minute, bidders fought for their chance to own #000 (and the mind-blowing benefits that came with it), ending with an incredible 119.2 ETH winning bid. As the auction closed, smiles spread across our faces and a cheer erupted throughout the room as we realized that Evelyn was getting her van.

Not long after, we pulled our chairs together, hovering over the open laptop and watching as the Zoom video began. A bright and cheerful face, and a wipe of an eye. “Evelyn is getting her van.”

Unfortunately, just a few hours later, the smiles were wiped from our faces when we discovered that the entire winning bid and all auction proceeds had been stolen from Bill Murray's wallet.

We were reeling and unsure what this would mean for all those involved, especially Evelyn and her family. How could we call her and put that burden back on her shoulders? Our hearts sank.

But then, miraculously, the woman who finished second place in the charity auction graciously agreed to match the highest bid and replace the funds that had been designated for Evelyn’s critical transportation needs and the other Chive Charities recipients who were to benefit from the proceeds. Beyond that, the Chive Nation community was adamant that Evelyn and other Chive Charities recipients would not suffer because of this cruel and heartless act.

A GoFundMe was set with a goal of $25,000, and in a matter of days, ballooned to an incredible $37,265 and counting. Chive Charities Executive Director Brian Mercedes called Evelyn’s mom, Sarah, directly and gave her the news that not only was the promise of her ADA van secured, but she would also receive several other life-changing items to support Evelyn’s care, including a Tobii communication device, rent for one year, and therapy items. In total, the impact was a staggering $77,000.

“It truly is exciting and life-changing,” Sarah told us. “Some people may look at it and say, ‘it’s just a van’. And to others, it very well may be just a van - but to us, it’s changing our lives.

“Never in a million years would I have thought I would have the opportunity to sit here and personally thank Bill Murray for helping my daughter and our family — but here we are,” she continued. “Thank you for the gift you’re giving Evelyn and my family.”

At the end of the day, this is all new territory to us…Web 3.0, NFTs, Crypto…but in a moment, a life was changed by it all – by Bill, by Crypto bidders, by John walking into the room and pointing at Evelyn, knowing that her story could inspire. And in another moment, it was nearly taken away. Thankfully, donors like you had Evelyn’s back. You refused to let her take the hit.

We might be new to a lot of this, but what we aren’t new to is making a difference. We aren’t new to watching you help us change lives, despite whatever might try to stand in the way. Thank you to everyone who made it possible. Be part of this next era with us as we continue to make the world 10% happier. DONATE HERE.