Going beyond the bark of duty

When we are faced with traumatic events - car crashes, medical emergencies, life-threatening situations - we count on medical professionals to be there for us. These people are our rocks. The unfortunate thing about rocks, though, is that over time they become worn down. Rushing water erodes them, leaving them smooth and small. Rain becomes trapped in crevices, only to expand when frozen, splitting mountains right in two. Being a rock for society, such as a first responder, a doctor or, in Carrie’s case, both, doesn’t make you feel the rain and the cold any less. 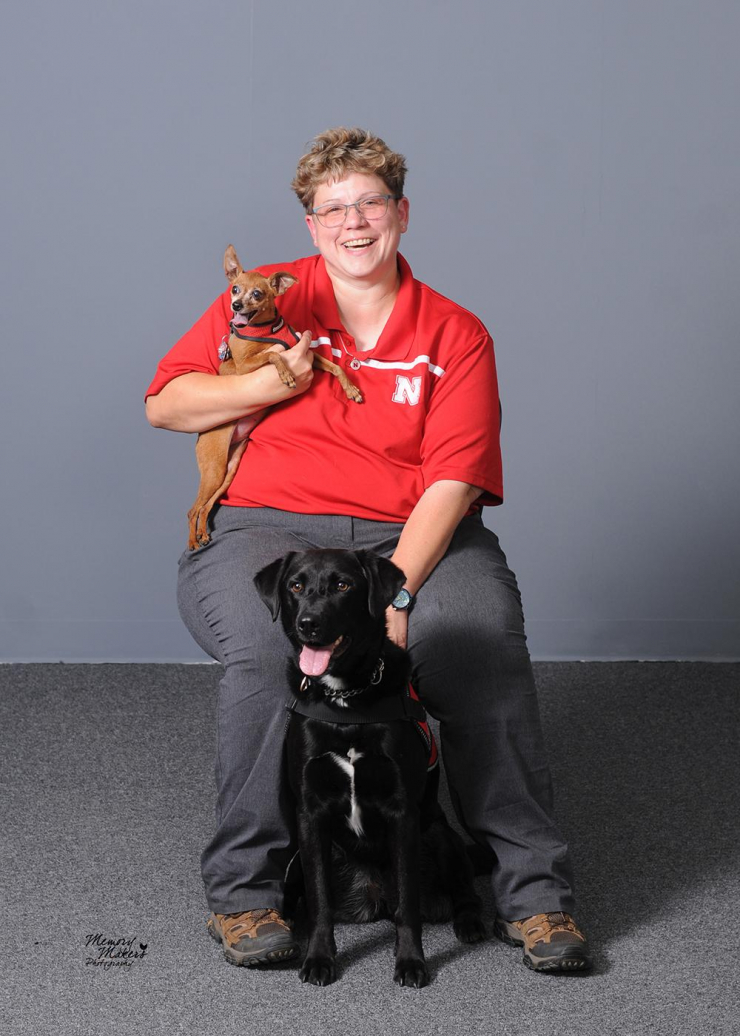 This bright and beaming dog-mom is Carrie. Behind her smile are many treasured memories. Growing up with her father -a Vietnam veteran- and her mother, in rural Nebraska, life was peaceful and easy. This peace was compromised when Carrie was ten years old: her mother was involved in a dangerous car accident that left her severely injured. Young Carrie helped take care of her mother while she recovered in the hospital, and she soon found that she was a natural. This incident planted the seed for a lifelong passion of helping people through healthcare. 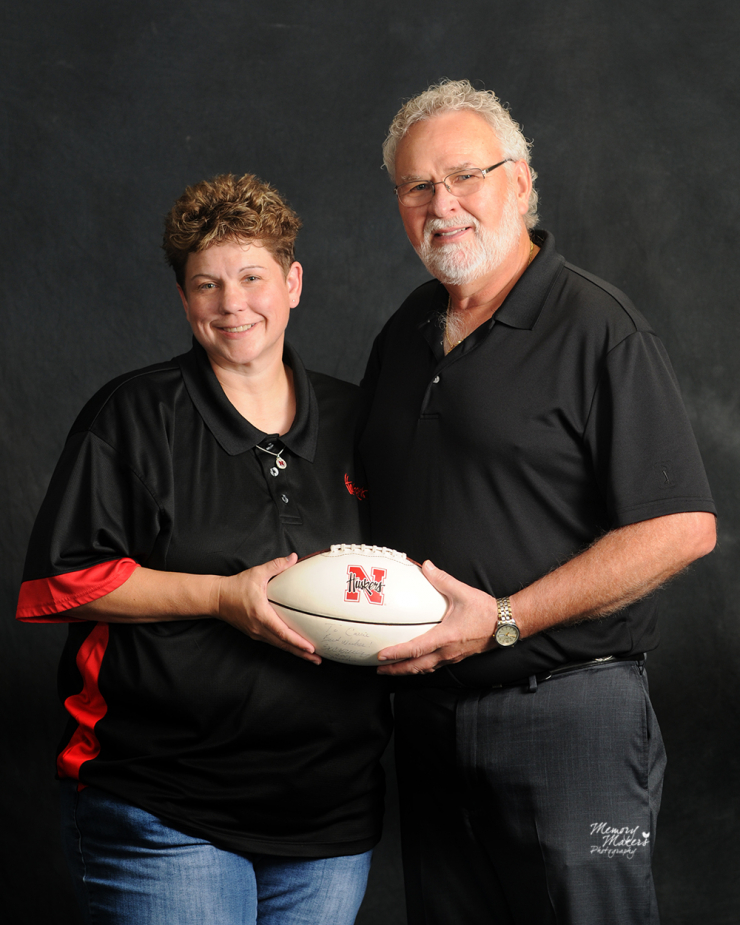 Going to Nebraska football games with her family, traveling between years of school, and concerts with friends are just some of the memories that give Carrie’s persistent smile some of its gleam. Like many others in the medical field though, Carrie’s smile conceals something she wishes she could forget: Post-Traumatic Stress Disorder, or PTSD. 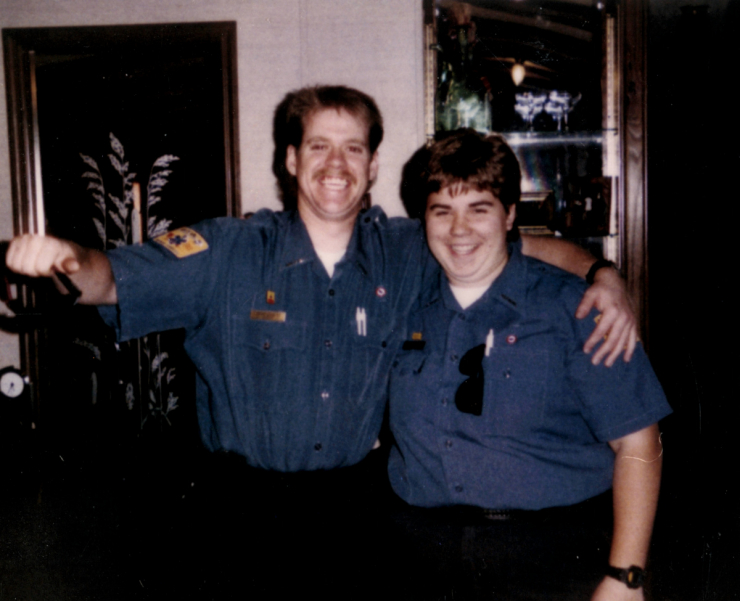 PTSD has been reported in up to 33% of EMS workers, a rate 10 times higher than that of the general population. This isn’t too shocking considering that they’re the first ones on the scene, seeing the entire situation with no filter or warning of what’s to come. Carrie found herself at such a scene on a dark night in October 1995. This was not just another shift; she was responding to a shooting which led to an on-duty death of a law enforcement officer. After this chaotic night, everything changed for Carrie. She developed PTSD and by 1996 her symptoms forced her to leave her beloved job as an EMS first responder. 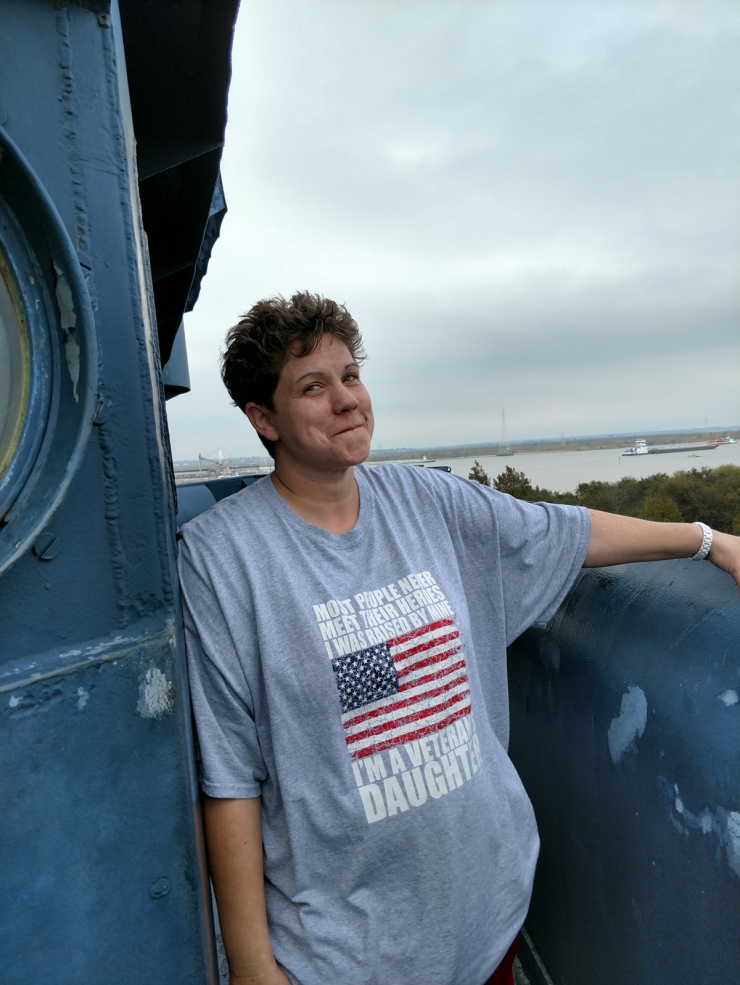 When Carrie decided she wanted to become an EMT First Responder, she was thirteen years old. As soon as she was old enough, she took the steps to make it happen. While in school at the University of Nebraska, she worked as a 911 dispatcher until graduation, when she began work as a first responder.

The unbridled determination she had shown to get to this point certainly wasn’t going to stop with her PTSD diagnosis. After having to regretfully give up the EMS career she had loved due to her worsening symptoms, she went on to get her bachelor’s degree at a small university in Kansas. To minimize her triggers, Carrie chose a small, quiet environment - a theme that would follow the rest of her career. Then, while still dealing with symptoms daily, she got into and completed medical school in Missouri. 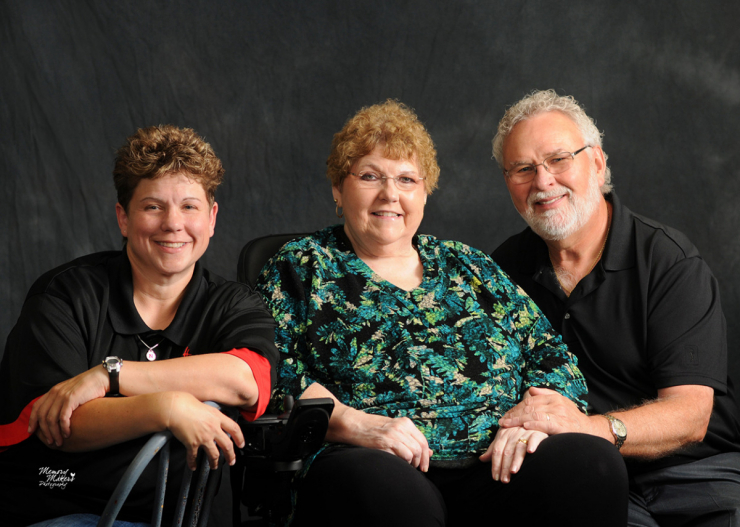 Carrie says that she couldn’t have made it through medical school without the support of her parents.

Even with a support system as strong as Carrie’s, mental health, especially when combined with medical problems, can be very hard to maintain. One of the hardest parts of dealing with mental health is finding the proper way to manage it. Pill after pill, therapist after therapist… Braving this process when you are already suffering is no small feat, but Carrie was determined, as always, to fight against her diagnosis as hard as she could. Just when her symptoms were starting to feel under control, thanks to a reliable medication, Carrie’s health sadly took a turn for the worse. Suddenly, Carrie was shaking, twitching, grimacing… all out of her control. 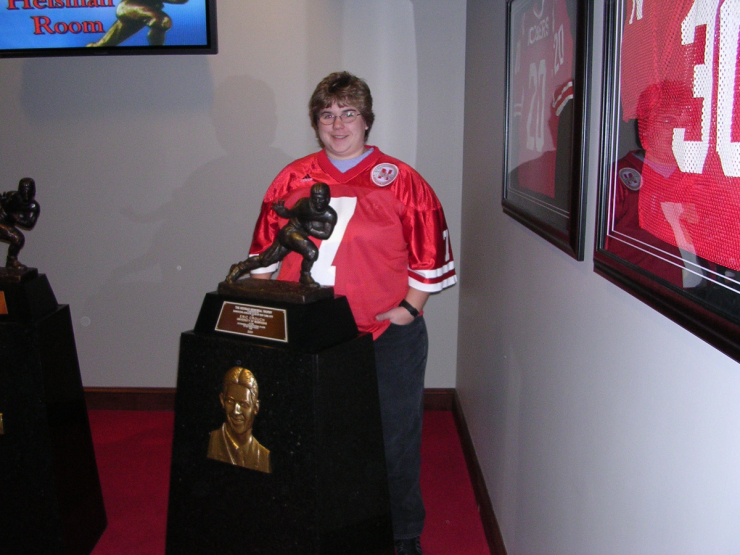 In 2014, she was diagnosed with Tardive Dyskinesia, or TD. This rare, debilitating movement disorder is actually caused by the medication that was keeping Carrie’s PTSD at bay. Carrie’s medication had been affecting her dopamine production for years, which is essentially the point. However, some people are at risk for adverse side effects from these medications, and some develop TD. Common areas affected by TD are the lips, eyes, trunk, and extremities. For someone who already finds it stressful to be around other people, like Carrie, dealing with twitching and involuntary facial expressions exacerbate things in a big way.

Not only did she develop a new condition, but she was then forced to get off her medication, causing her PTSD to spiral. 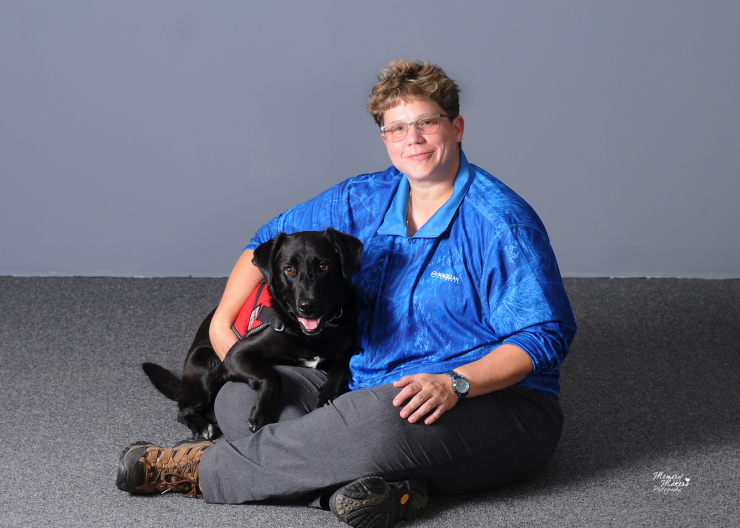 Carrie had been surviving day-to-day, working as a Family Medicine Physician for over eight years until she was forced out of her profession in 2015. With medication no longer keeping her symptoms under control, Carrie was afraid to go out in public. Even in a small, sleepy town, flashbacks to that awful night in October became more frequent. Sudden, unexpected or loud noises can trigger these flashbacks, as well as the sight of emergency vehicles, especially if their lights are on. For Carrie, being triggered can make her feel disoriented or unable to move. This makes driving pretty much impossible, so her ability to independently go to the store or eat out with friends has been very limited at times.

She had to explore new treatment options. And this just might be the most adorable treatment known to man: 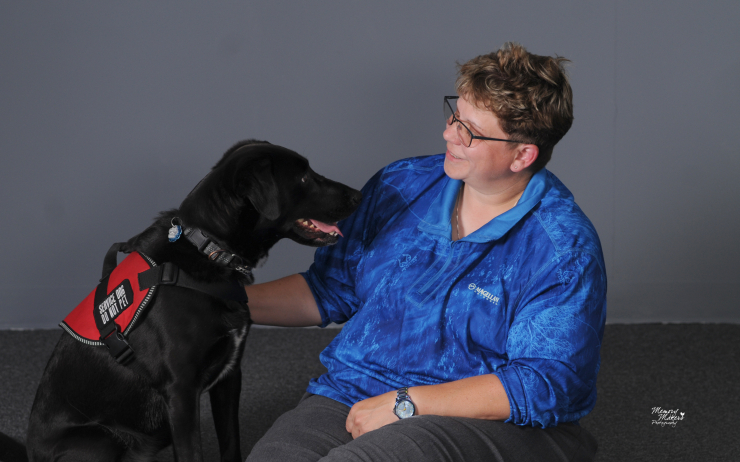 As we all know, dogs are completely amazing, magical creatures. They love us unconditionally, and we love them back. Some dogs go above and beyond the bark of duty, though. Dallas is one such dog. Service Dogs for America in Jud, North Dakota paired Carrie up with her PTSD service dog, Dallas, earlier this year. As it turns out, though, training for these dogs-with-jobs is extensive, and expensive. Luckily, Chive Charities was able to contribute $10,000 to Dallas’ training fund, so he can keep making a difference in Carrie’s life. 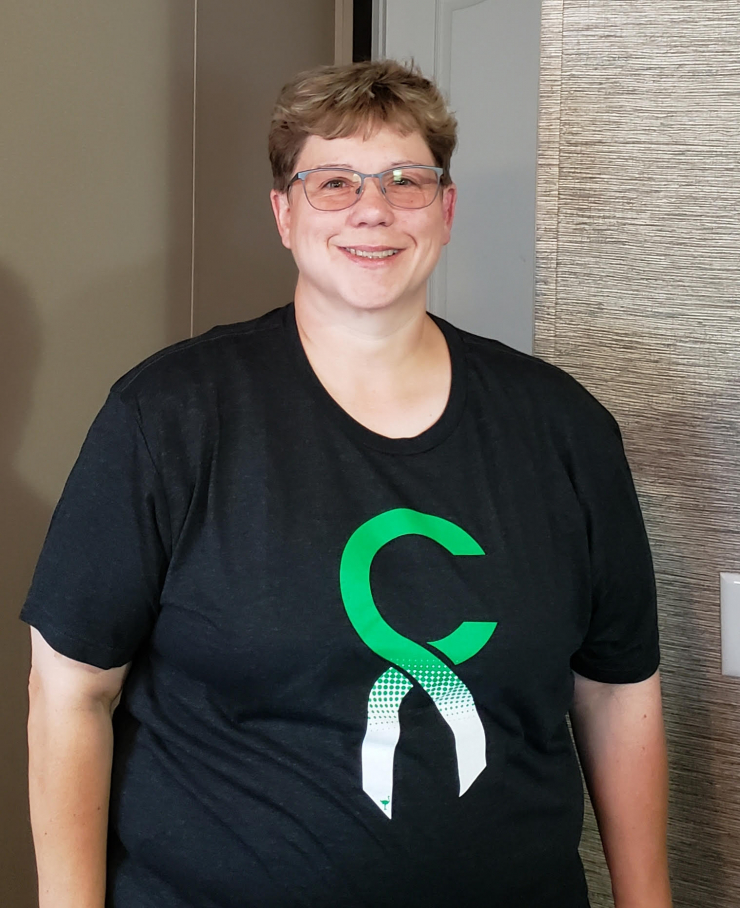 And make a difference he has! Carrie’s mother very sadly passed away this year, after a battle with a rare degenerative condition called ALS, or Lou Gherig’s Disease. Training with Dallas had to be put on hold while Carrie and her step-dad cared for her mother. Carrie’s closeness to her mother made this an incredibly tough time, but Dallas was there for her. 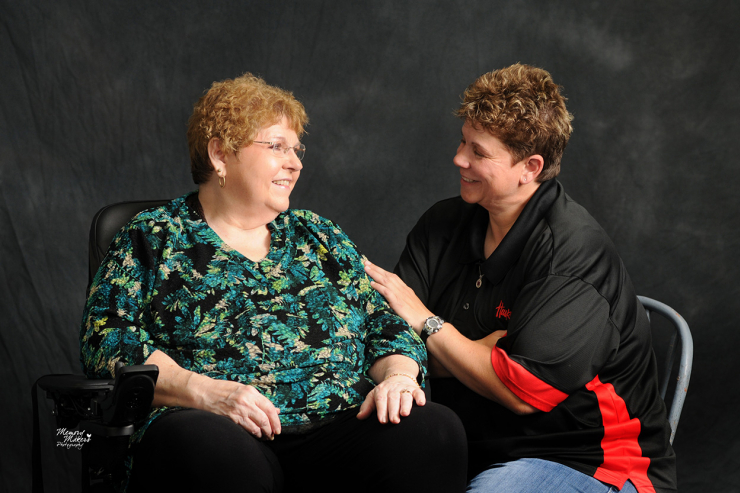 With this grant from Chive Charities, Carrie can get back to training with her service dog, so that she can fully integrate Dallas into her home. 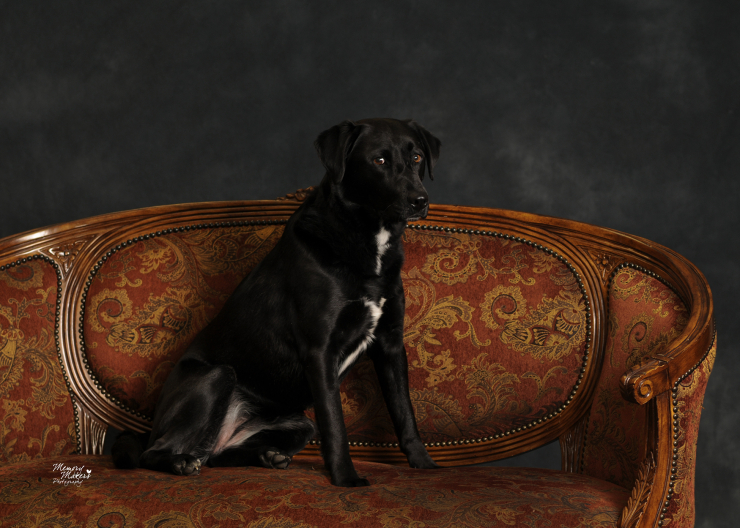 Thanks to Dallas, Carrie is able to enjoy some of the things in life she used to love. Going out to eat with friends, visiting museums, and even geocaching, are all within her grasp yet again.

Carrie spent years acting as a rock, and now she has a rock of her own to rely on (a cute, cute rock!) in the form of a service dog. If you would like to help more heroes like Carrie find their happiness and independence again, while significantly decreasing the puppy unemployment rate, become a donor with Chive Charities HERE!