The first blush of revelers had funneled in.  Chelsea Miller from Chive Charities suddenly ran up to me, “He’s here! Get everybody together, Devon’s here! They’re bringing him through the back door!”

I started getting all the Chivers together and explaining the situation, spread the word. A few Chivers took charge quickly. In minutes flat the entire place had gathered around a small incline that opened up to the second floor where Devon would enter.

Right on cue the paralyzed firefighter rolled up to the door with his family and the crowd went wild. Devon Colbert raised his head and smiled…

Devon Colbert was a career firefighter for the Garland Fire Department, about 20 miles outside Dallas. He was also a volunteer firefighter for Rockwell Fire. Since the day Devon became a firefighter, he knew he was in the right place. He often called Station 7 his second home. The only thing Devon had ever wanted to be was a firefighter.

Devon’s First home was growing fast. He had two boys – Levi, 3, and Deagan, 15 months old. It was December 17th, 2012, one week before Christmas. Devon wanted to get some Christmas shopping done so he grabbed his oldest son, Levi, and headed out. On the way to the mall, their lives took a turn for the worst. The crash was violent, Devon doesn’t remember much about it. The car rolled uncontrollably. When the dust settled, Devon saw his son had been strapped in. He was moving and barely had a scratch on him. Devon was not as lucky.

The first call went to his brothers at Station 7. His friends would be the first to arrive on the scene. “It was a completely different experience having the guys you work with work on you. I knew I was in good hands. I also knew my neck was broken.”

The thought of never being a firefighter again was devastating. But the thought of never being able to hold his children again was a feeling they have not yet created a word for. At best, it was unacceptable. Devon would spend Christmas in the hospital with a singular thought on his mind: He must learn to move again, “The doctors prognosis would become my drive. I would exhaust every ounce of energy and fortitude I had and trade it in for just a little feeling.”

Devon started weekly therapy sessions at Project Walk in Dallas to amazing results. Feeling began to return to his arms. Devon knew if he worked harder, he would be able to move them. That’s exactly what happened. First his arms, and then his hands. His progress was so encouraging to the doctors, a specialist was brought in to strengthen his core.

He began training on a standing frame with a foot simulator. After months of tireless work, feeling returned to his legs. The once-impossible hope of moving his legs was now only, well, only improbable. Devon is keeping the faith. “I am pushing my body as hard as it will allow right now. My wife and my brothers at Station 7 have been my rock.”

The fire department, once Devon’s second second home, has now become his second family. When Devon’s wife, Emily, is stretched too thin, they take Devon to physical therapy. They’ve even held local fundraisers for Devon, “I don’t know where I’d be without by brothers. I took so much comfort in those early days knowing that the guys from both departments were by my wife’s side helping her.”

Devon received the news just before the meetup that he would be the recipient of a $24,000 grant from Chive Charities. The entire grant is focused on Devon’s legs. The Chivers helped purchase him an FES bike (Functional Electrical Stimulation) so he can continue his physical therapy at home. The remainder of the grant is divided in two parts: The first is a SCI Recovery Program followed by Specialized Strength Training Physical Therapy. Devon is very much determined to walk and these items will go a long way to helping him achieve that goal.

Beyond the physical, there are so many mental hurdles to overcome, “There are good days and bad days. You can’t do it yourself. You need others to help motivate you.”

And so last Thursday 600 Chivers gathered around Devon to provide as much motivation as they possibly could. The applause was so loud when I met him I couldn’t hear myself talk. Devon reached out and shook my hand. He still has trouble making a fist. Surrounded by new friends and all the encouraging words in the world, the Dallas meetup would be, according to Devon, a turning point in his recovery.

Devon is one of the kindest people I’ve met. He spoke to me often about how grateful he is that his son was unharmed. The way the Chivers embraced Devon at the meetup was everything he needed. He was looking around the room and smiling the whole night.  It was a magical night for Devon… 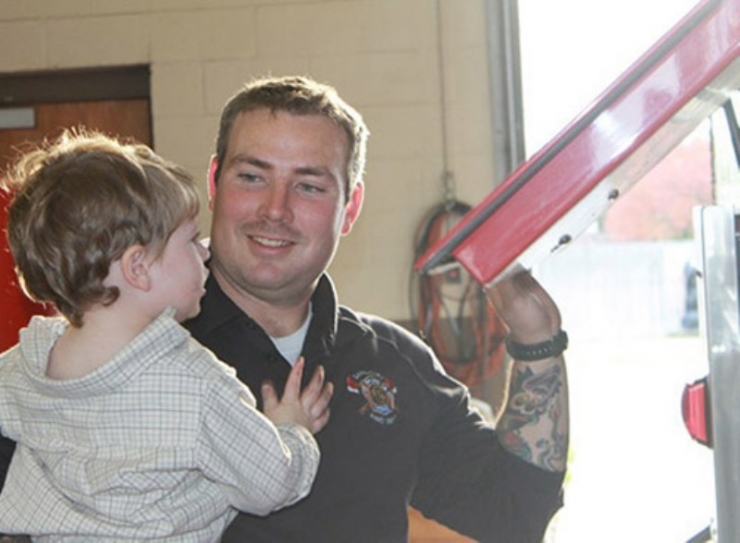 Prior to the accident, dad gives Levi a tour of the fire station. 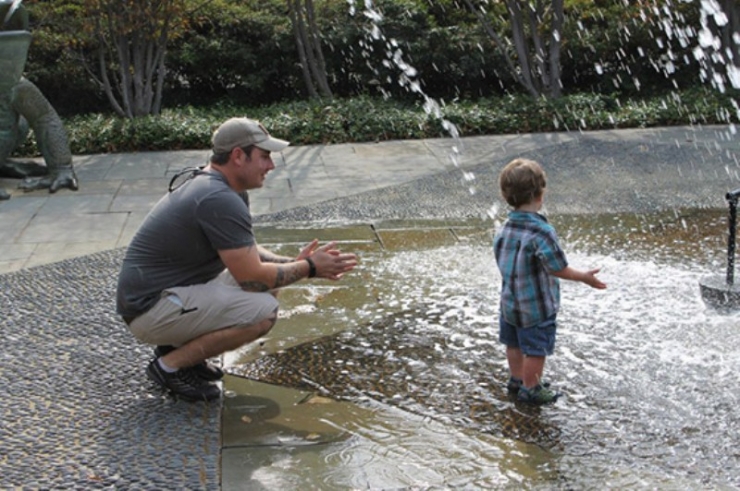 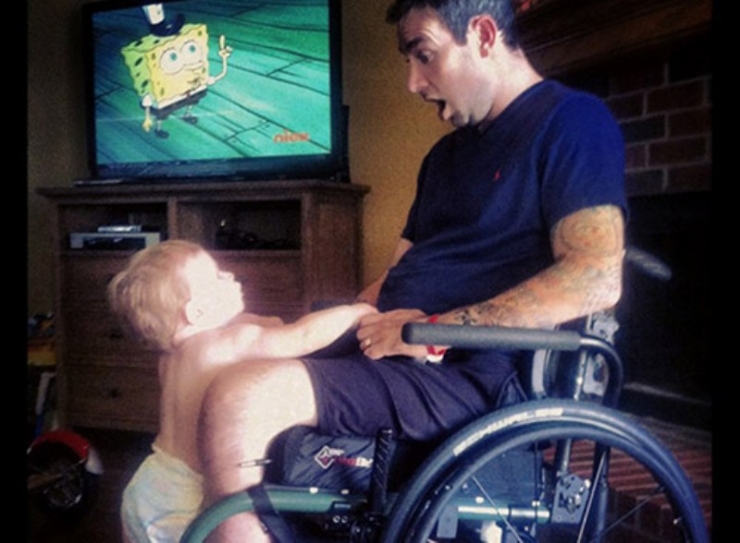 With his youngest son, Deagan. 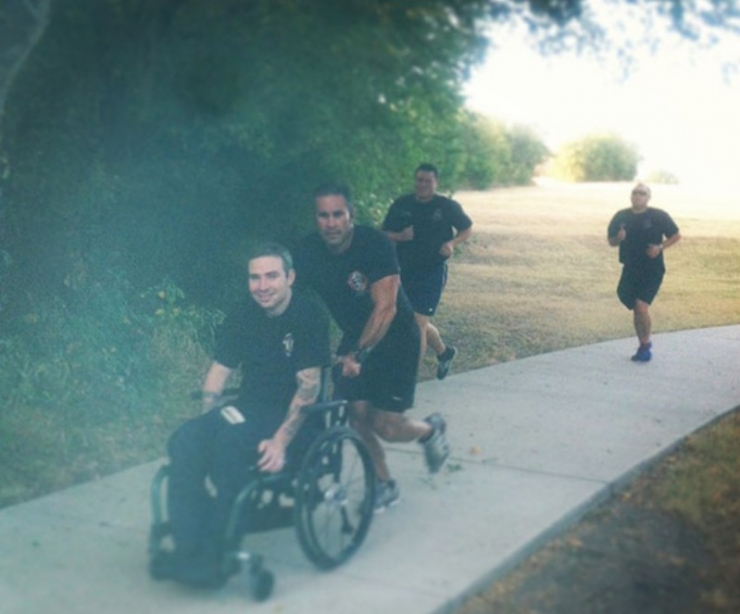 “I don’t know what I’d do without the support of my brothers.” 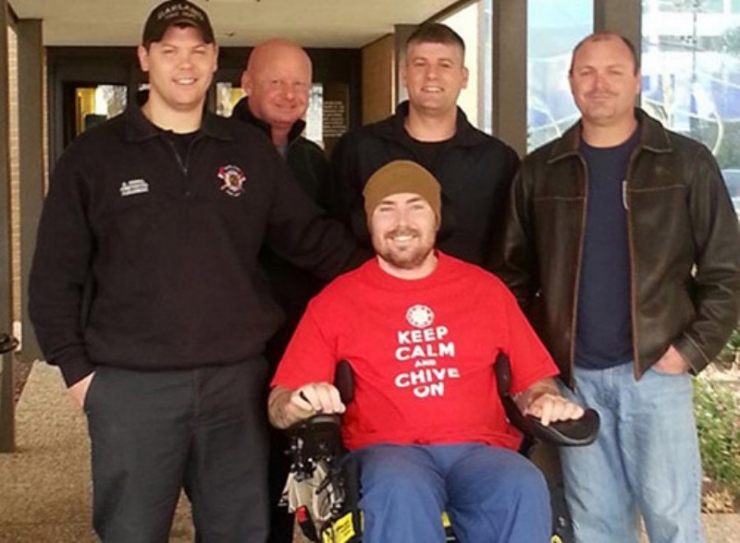 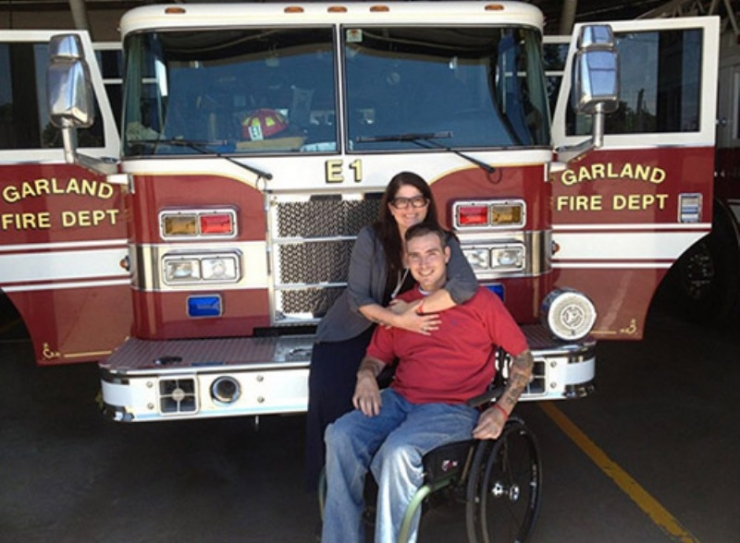 Devon with his wife and biggest supporter, Emily. 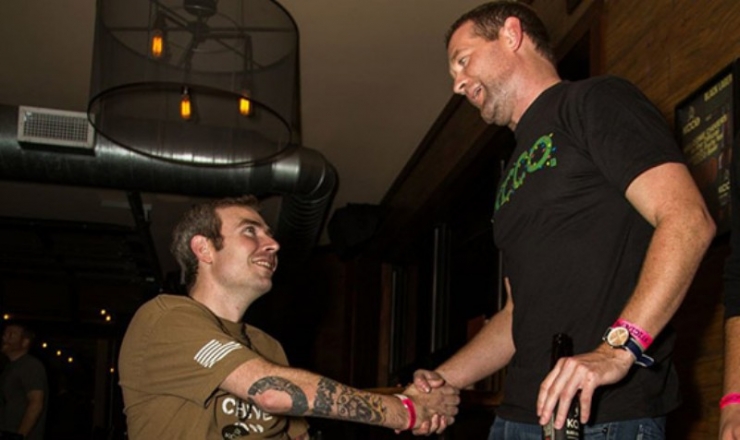 And the meetup begins! 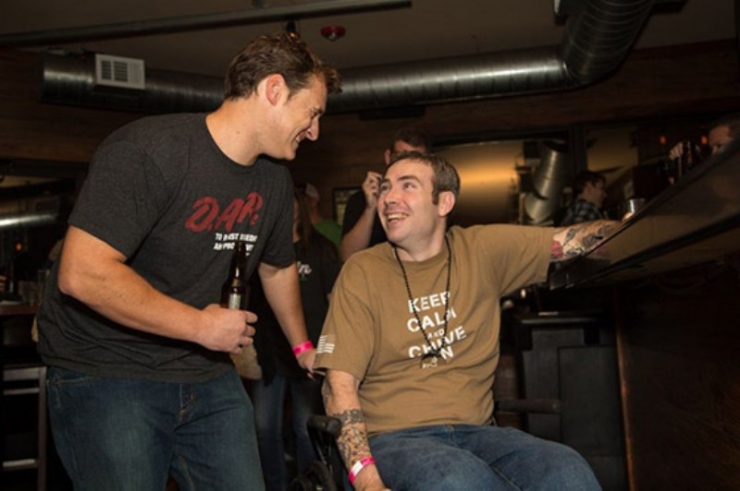 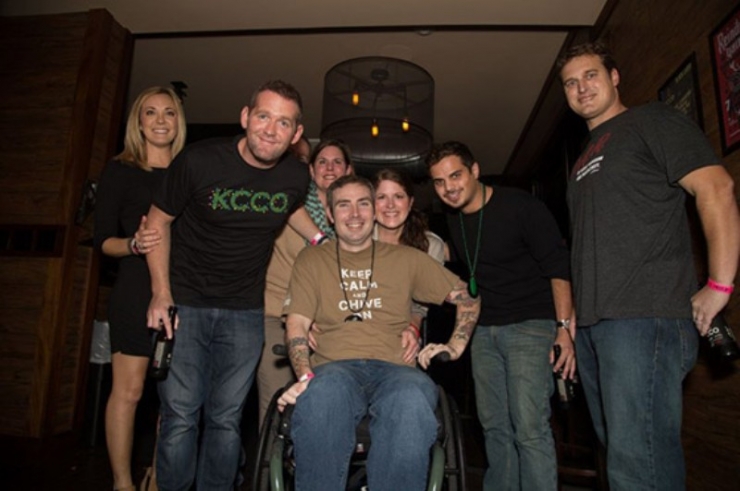 At the end of the night, I walked Devon out to the car. We spoke for a while. That exchange will stay between Devon and I for now. Suffice it to say Devon has hard plans on becoming part of the long chain of small miracles we’ve seen on theCHIVE recently. We’ll be looking forward to updating theCHIVE on your progress, Devon. 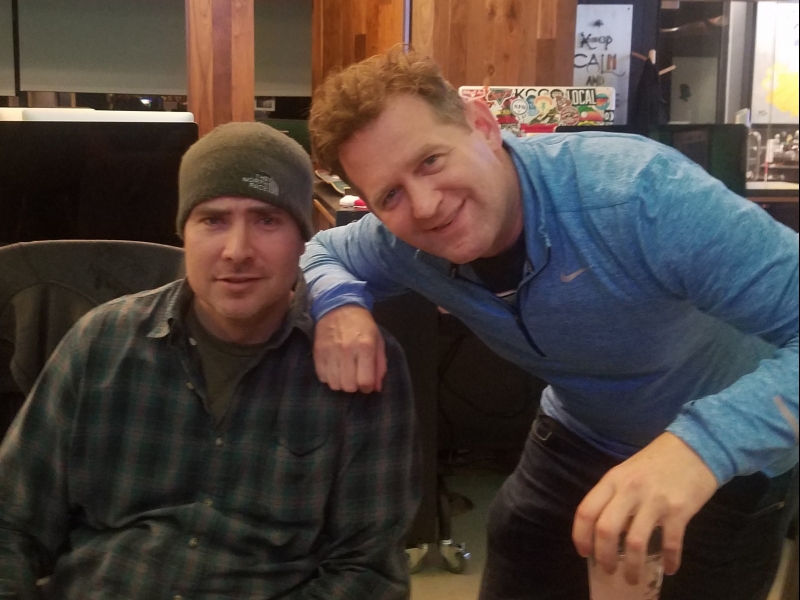 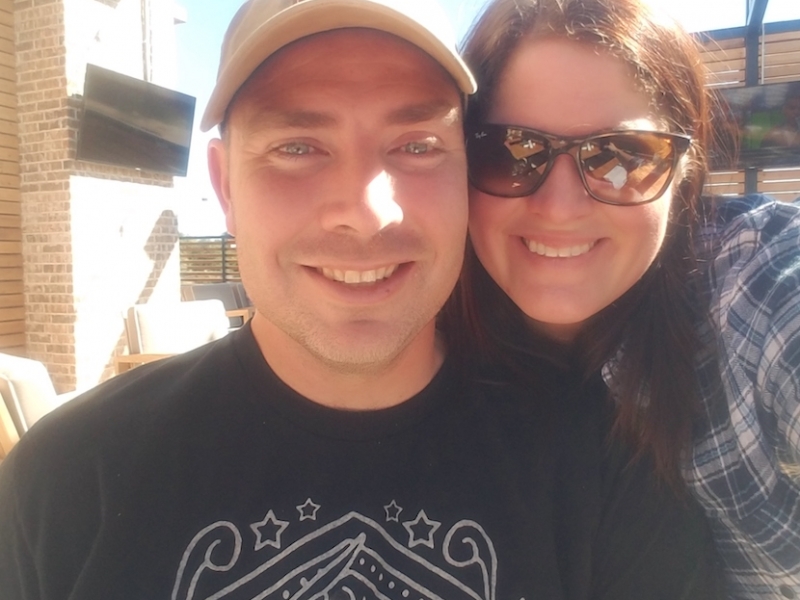 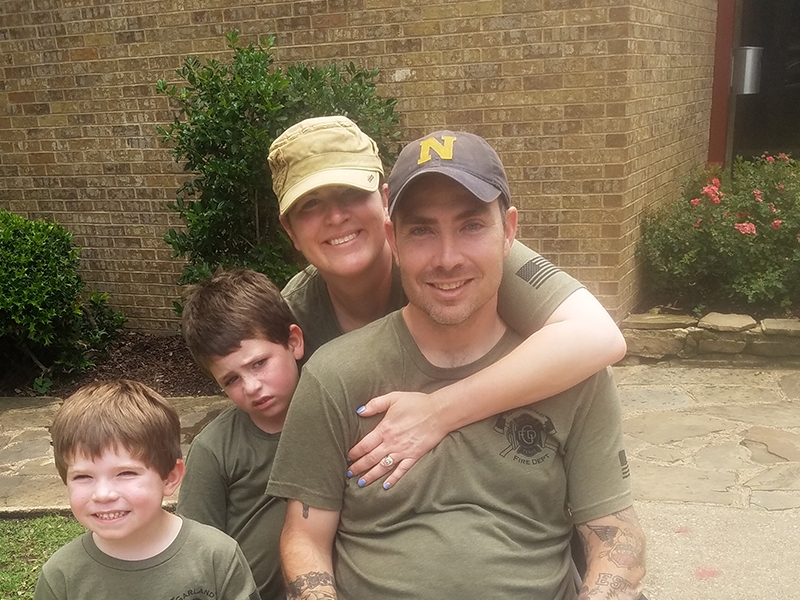