When the end is really just the beginning

Ty Buras’s 29-year-long Army career is a lot like a row of books held together by two bookends. On the left side is the beginning, a marker that starts the chain along which everything else will follow. The middle is filled with stories - moments of triumph and pure, unadulterated happiness alongside pages of fear, and uncertainty, and the deepest pits of despair. And there, at the farthest point from the start, is the end. A final bookend that closes the loop. 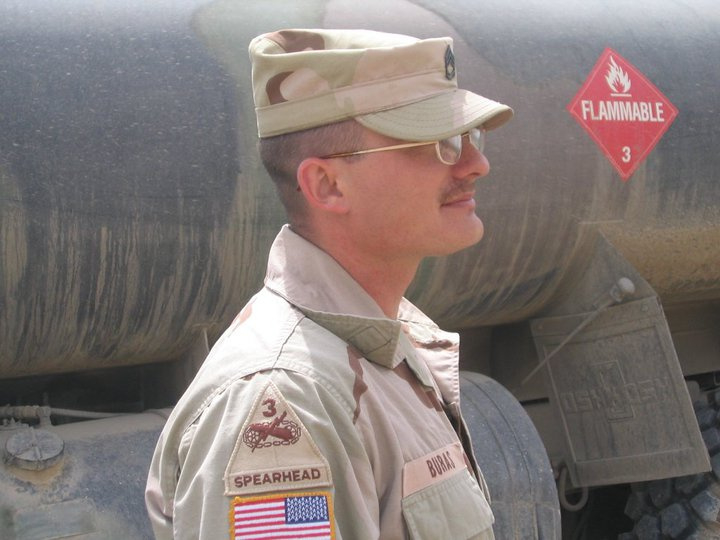 Looking back, there are quite a few stories Ty would like to pull from the rest and never see again. But if you remove one, everything falls. The in-between is what keeps the whole thing together. You need the good with the bad to get the full picture. You need the joy and the sorrow to come out on the other side. Ty’s had his share of both. 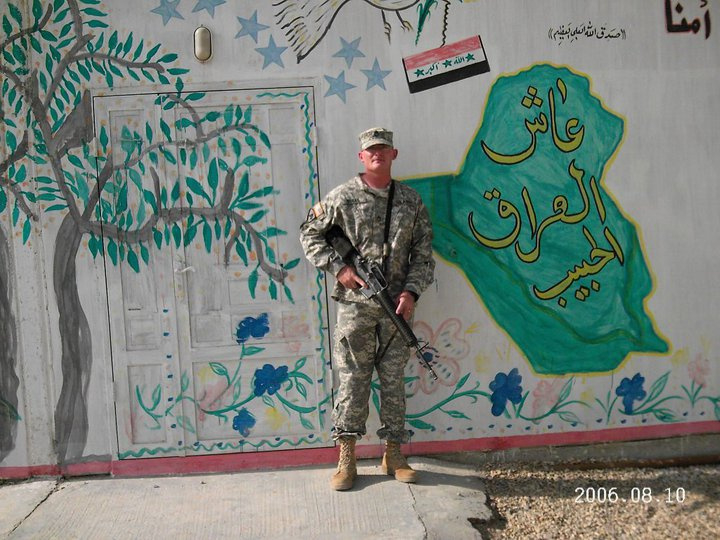 Let’s take you back to the beginning, to the very first bookend.

“It was still during the Cold War era, so the atmosphere was always on edge,” Ty recounted. “I knew it was serious there when my Company Commander took all of us new soldiers to our D.I.P. (Die In Place) position at the Fulda Gap. He proceeded to tell us that if the Russians ever attacked, this is where we would make our final stand. He also told us that the life expectancy of a grunt here was roughly 11 seconds. That scared me pretty good.” 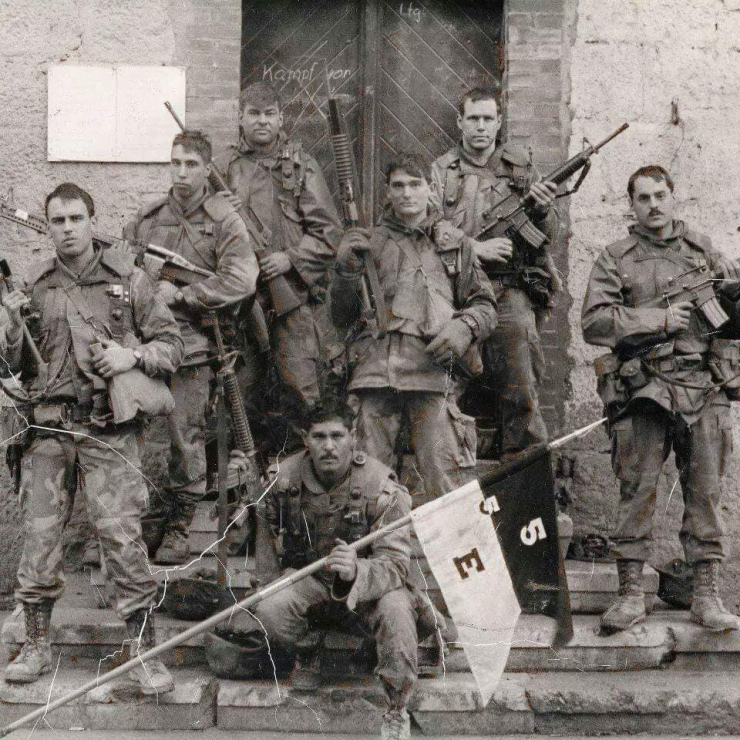 Thankfully, Ty’s fear was short-lived and his training in Germany was fairly straightforward. By late 1990, he was preparing to return to the states and even considered leaving the Army to become a civilian again.

It wasn’t meant to be.

The President went on television and announced that he was deploying the 3rd Armored Division and other units to Saudi Arabia. “When we heard his words, we were all hooting and hollering,” Ty said. “At the time, fear did not take root yet.” Simply said, the plan changed, and instead of returning home, Ty and his unit deployed to Saudi Arabia for Operation Desert Shield. 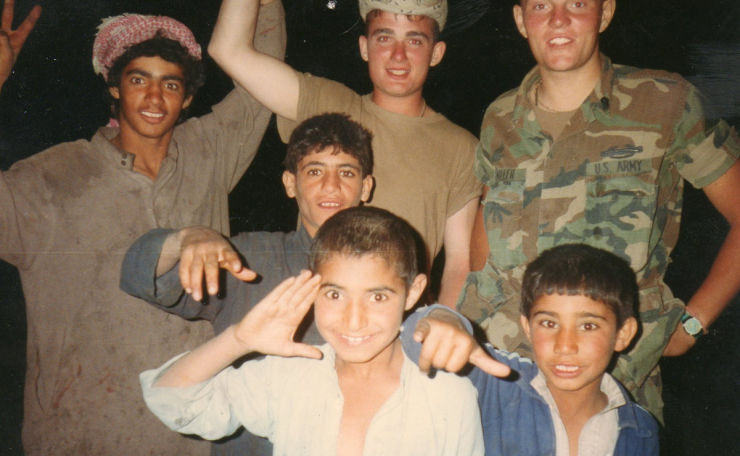 Here, the days of straightforward military training were over, and the real combat began. “I saw devastation at its worst,” he told us. “Dead Iraqi bodies lying outside or halfway out of their blown-up vehicles. Fires that lit up the sky. The smell was horrendous, and even now, I can remember the smell of burning flesh like it was yesterday.” 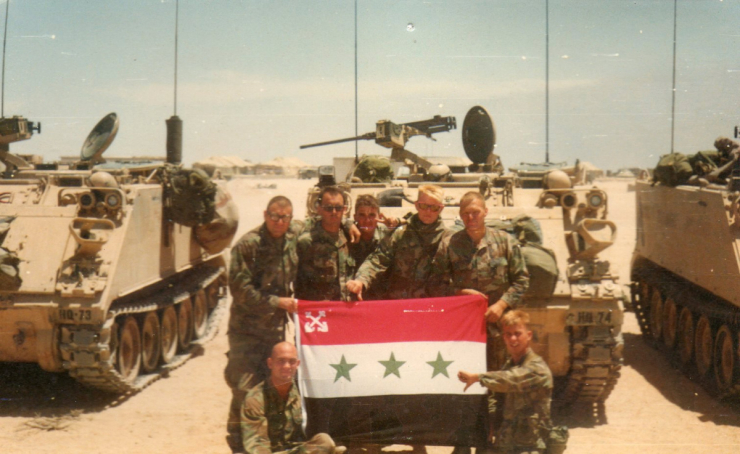 These are the moments Ty wishes he could pull out and replace with new ones. But there was more to his story, more of the in-between. 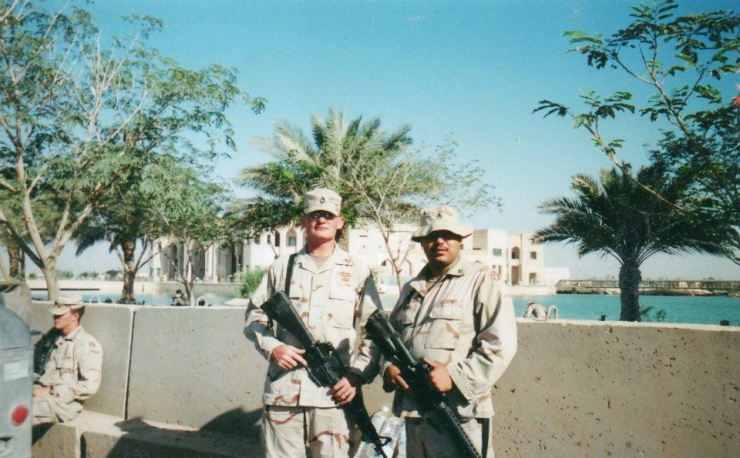 After Desert Storm, after experiencing trauma that would change his life forever, Ty switched from active duty to reserves and was sent back to the U.S.

Things seemed pretty normal for a while. He went to school, got a job, and found a wonderful woman to share his life with. Only things weren’t as they seemed. Ty had debilitating nightmares and insomnia, and he drank every single day. 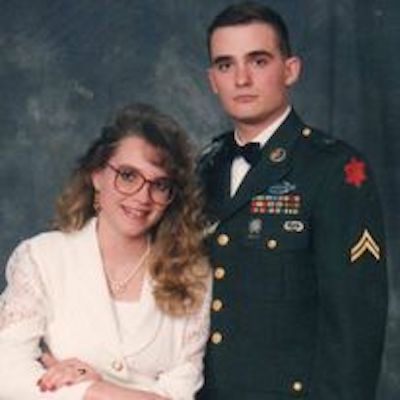 “I sought professional help and was basically told it was in my head,” Ty told us. “I dropped out of school because I couldn’t focus or get good enough grades - or because I was too drunk.”

One night at work, Ty decided he was done. “I took my service gun and stuck it in my mouth. I was ready for the end.”

“Luckily, my boss caught me and took me to the hospital, and I stayed there until I got better,” he quietly said. “With the help of my wife and family, I did get better. The thought of suicide was always there, though. I just hid it well.” 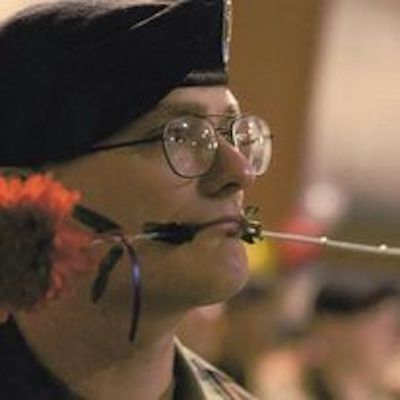 Through it all, Ty stayed in the Army Reserves until 1999 when he took a position in his unit as a platoon sergeant. “I took this job profoundly serious,” he said. “I cleaned up my act and put all of my energy into training my soldiers to survive combat. I was still fighting my demons inside, but I kept them hidden.” 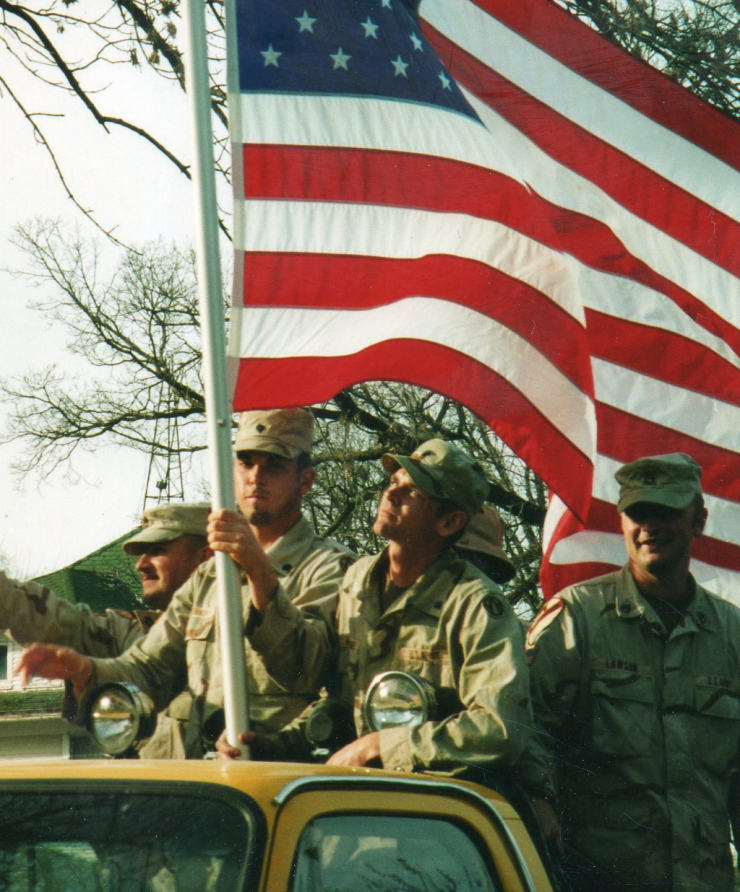 Then September 11th happened, a date we would all like to pull out from the rest and replace with something new.

By 2004, Ty and his unit got mobilization orders and were sent back to Iraq. When they got there, they went to a small FOB outside of Baghdad called “Log Base Seitz.” Ty was a little worried, but thought, “I’m not in infantry anymore, so how bad could it be?” 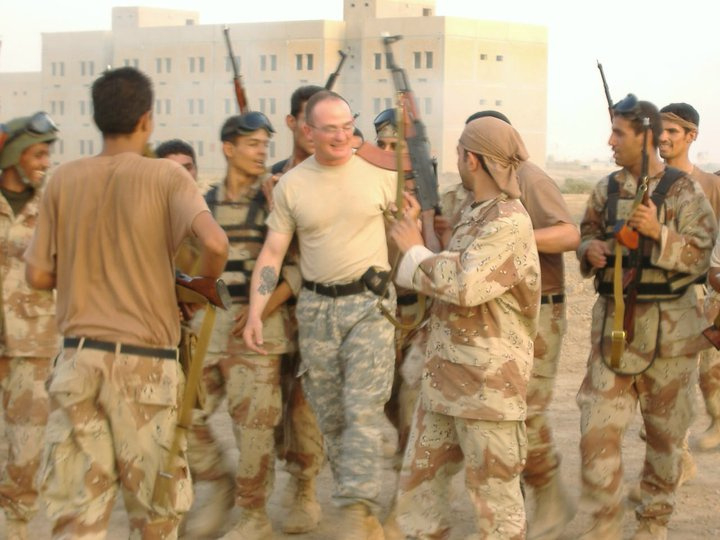 They were hit with mortars every single day, sometimes two or three times a day. Ty’s unit was very lucky to not have any deaths, though they felt the pain of loss from the other units they had grown close to.

“The stress was getting to me,” he said. “My demons began to resurface and I found myself trying to die. I stayed in the open. I volunteered for any mission I could go on. I had a death wish. The pain was so great, all I wanted to do was die.”

Ty physically survived Operation Iraqi Freedom (OIF), but his mental and emotional well-being was hanging on by a thread. The demons he kept at bay for years could no longer be silenced, and everything came crashing down when he retired from 22 years of active duty and 7 years of reserve service with the U.S. Army.

“I was completely lost,” Ty recounted. “The Army was my life and my passion. Besides my wife, it was the love of my life. And now, I was no longer doing what I loved and had nowhere to turn.”

Thankfully, miraculously, his wife and a former soldier caught him just in time. He entered treatment, received life-saving professional help, and faced the toughest battle he had ever fought - one for his life. This time, the hiding was over and the real healing began. 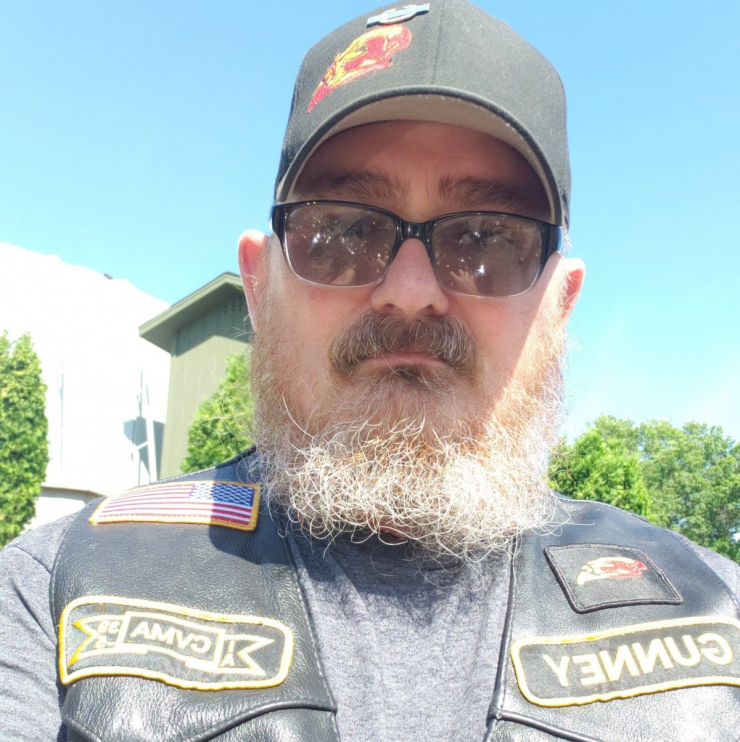 Ty was ready to close the book on that chapter of his life and turn the page to a new beginning. He moves forward every day with the help and support of his counselor, church, family, and an attention-seeking, belly-scratch-loving, life-saving service dog named Wrigley. 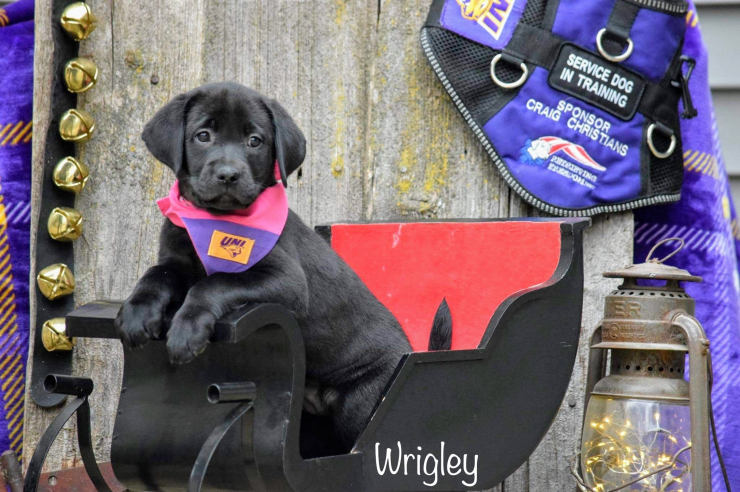 Through the support of countless donors and Chive Charities Green Ribbon Fund (become a member HERE), Ty was able to partner with the Retrieving Freedom service dog organization for a total impact of $10,000. The impact of Wrigley’s near-constant face licks, tail wags, and love for Ty - let alone the mobility and emotional assistance she provides - is harder to quantify.

“Before I got Wrigley, I never left the house,” Ty said. “With her help, I’m more comfortable in public places and she calms my anxieties. A couple of weeks ago, I was having a hard therapy session, but Wrigley climbed up beside me and gently rested her head on my lap, comforting me.” 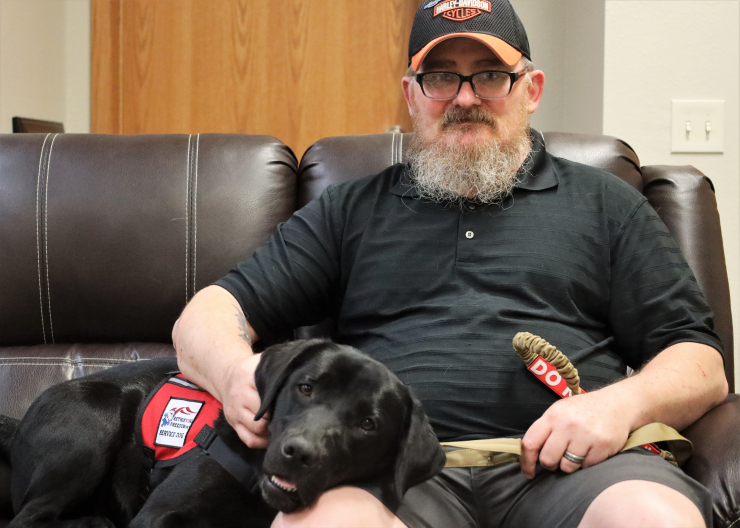 Ty served his country for nearly 30 years, overcoming enormous obstacles to finally place the bookend at the end and close the loop. It doesn’t mean the journey is over. It doesn’t mean there won’t be more sorrow or more joy still to come. The in-between is messy, but the big picture is worth it. And you can bet Chive Charities and our community will be right there with Ty, cheering him on every step of the way. 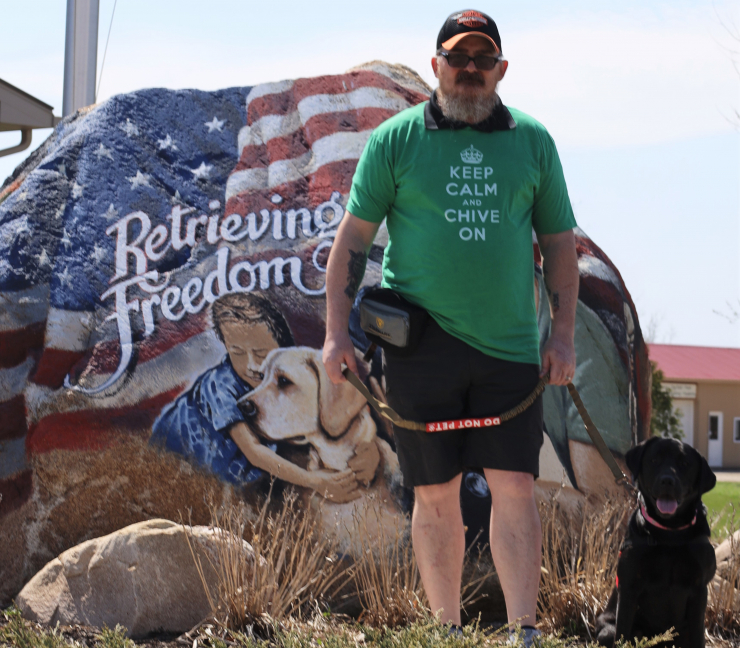 By becoming a monthly subscriber today, you can help us write the next joy-filled chapter for recipients like Ty. To date, he’s the 88th veteran recipient to receive a life-changing grant. Remember the bookshelf...if you pull one, they all fall. But if you add one, they come closer together. We can’t do it without you. DONATE HERE.