When music becomes a safe Haven

I can get up and face the day
Just fine all by myself
Go out and take on the world
And get it done like nobody else
Oh. But I don’t do lonely well. 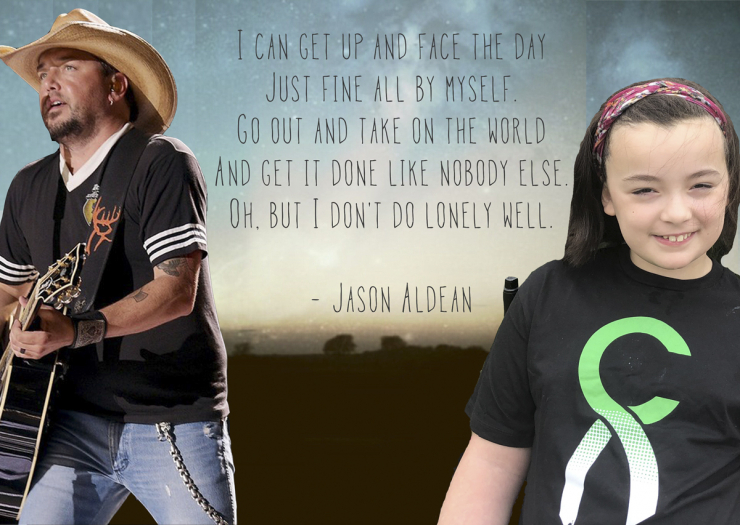 When UMG Nashville’s multi-platinum superstar Jason Aldean performs his hit “I Don’t Do Lonely Well” in front of tens of thousands, most in the crowd assume the lyrics are about girl trouble. But for one resilient young girl, those words take on a different meaning and have become the refrain of her life. 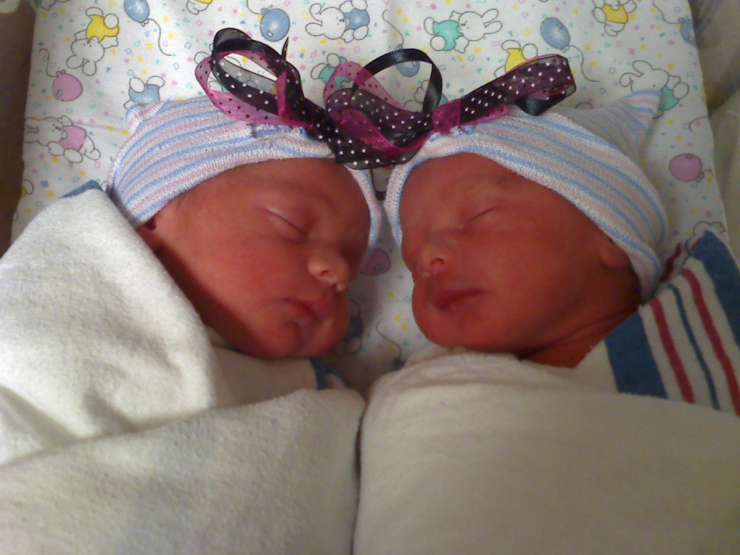 I can get up and face the day

Haven Blackshear entered the world minutes before her twin sister, Kinlee, on April 3, 2010. Being born 5 weeks early, both twins quickly developed apnea and were flown to Baylor Medical NICU for two weeks. Little did her parents know at the time, but this would be the first of many hospital visits and emergency flights for Haven. 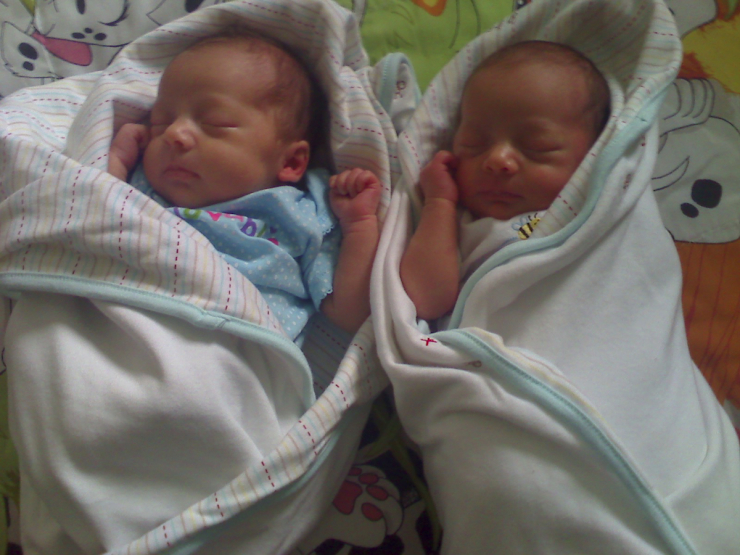 As the twins began to grow, Justin and Carrie had suspicions that an underlying factor could be causing Haven to fall behind the same development milestones as her sister. At nine months, Carrie Blackshear was convinced something was going on and took Haven to a neurologist in Oklahoma City where doctors confirmed what the practicing nurse had suspected. Haven was diagnosed with cerebral palsy. 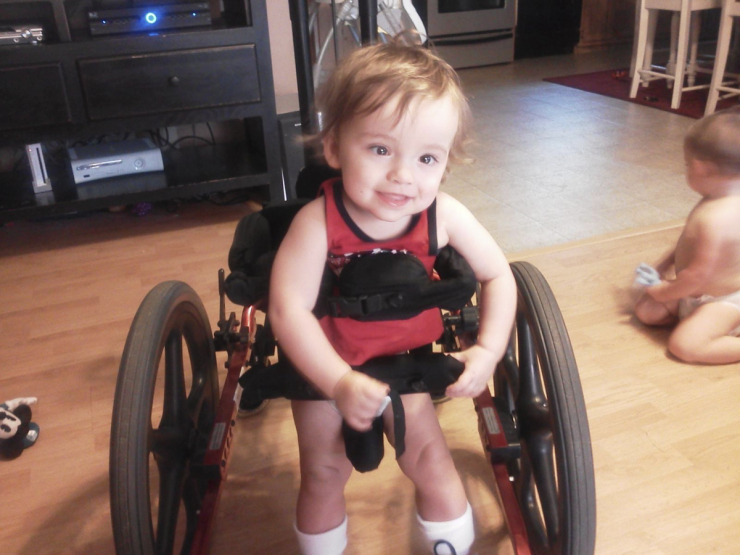 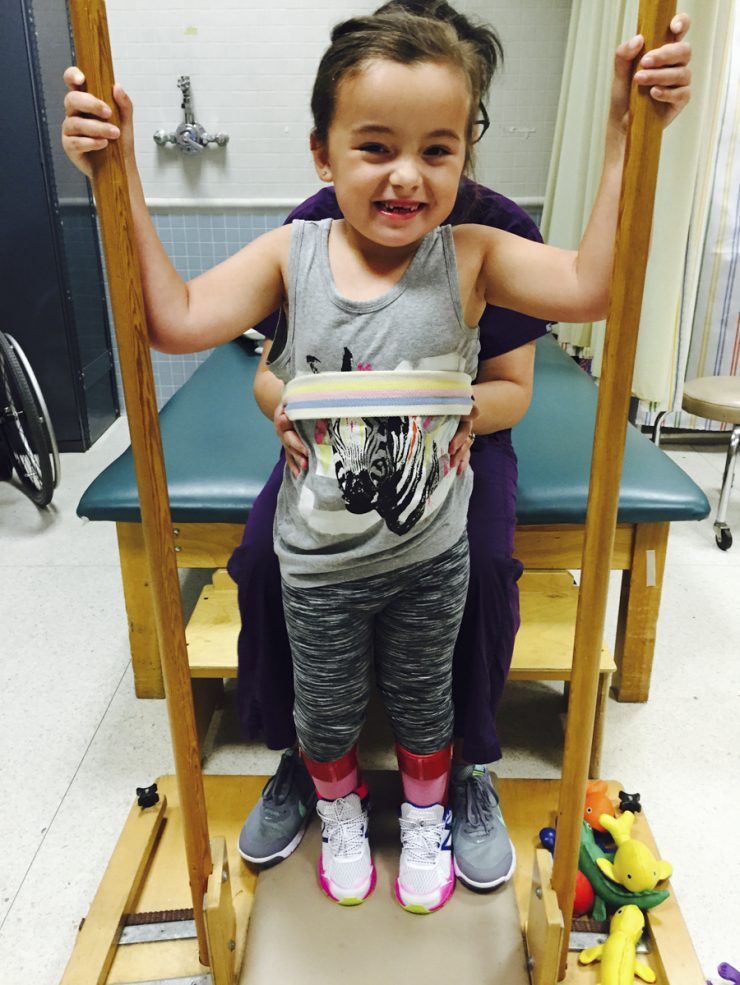 Go out and take on the world

CP can severely affect brain development, muscles control and posture. While a diagnosis of CP may slow down many, Haven has taken the challenge head on. She began physical therapy and was determined to catch up physically. After two years, Haven could sit unassisted and was even able to feed herself with shaky arms. 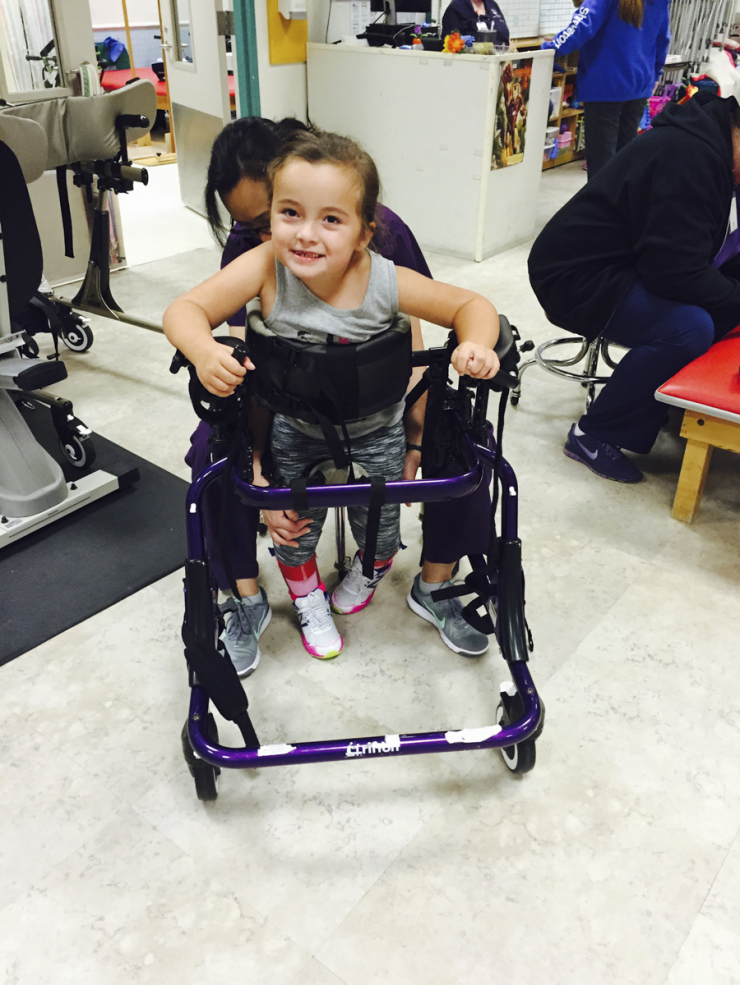 In 2013, Haven took part in a 3-year stem cell study at Duke University that yielded minimal results. During the study, however, doctors noticed that Haven had a large amount of fluid on her brain. When their local pediatric neurosurgeon told them they’d be crazy to consider brain surgery on Haven, Justin and Carrie decided to dismiss the idea altogether. They decided to allow Haven to continue to develop at her own pace, which was advanced for her diagnosis. 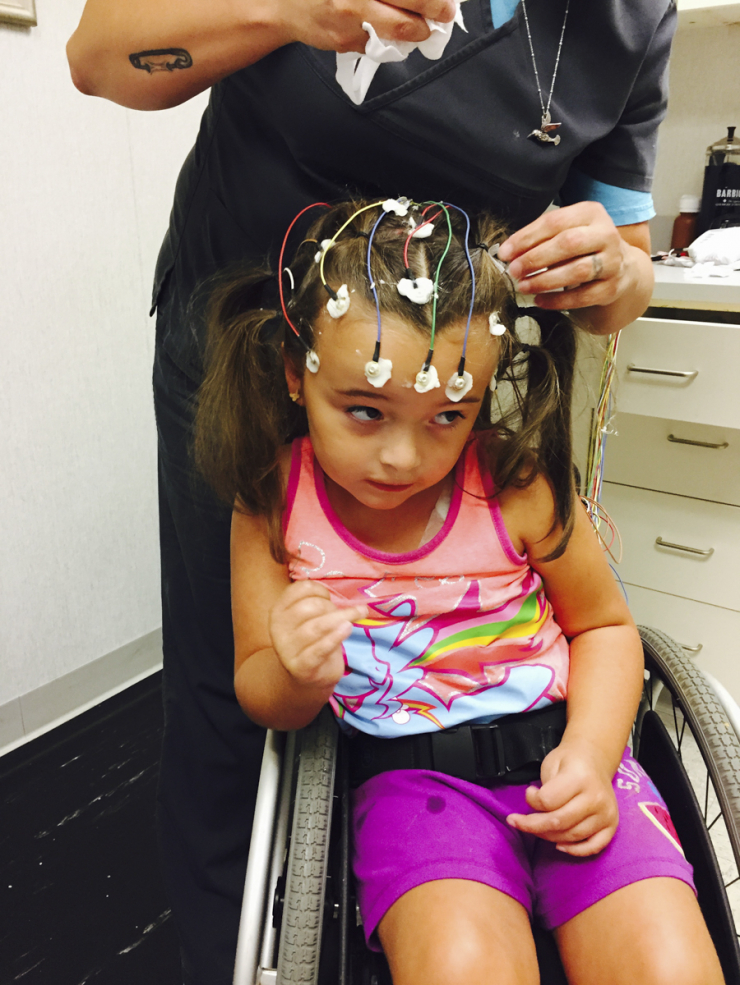 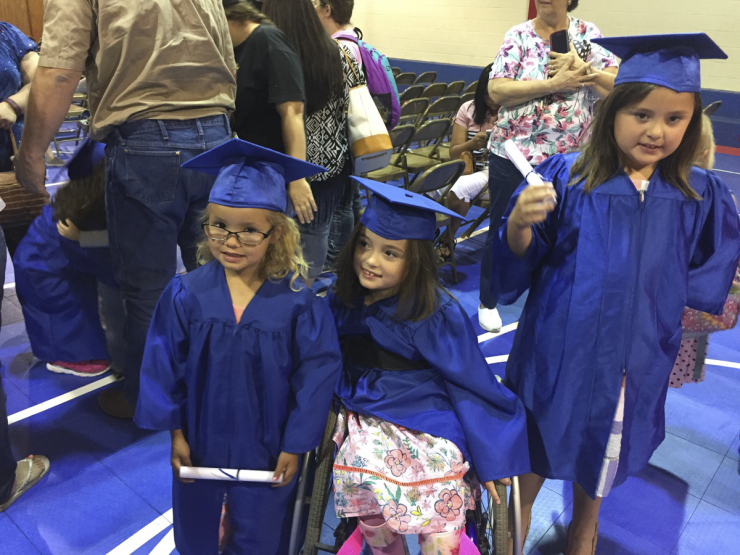 Haven is surprisingly mature for her age. She’s highly intelligent, both emotionally and mentally, and has a great sense of humor at the same time, despite the odds being stacked against her. When we read her narrative and talked to her mother on the phone recently, it was easy to imagine Haven as a late-teenager, even though she just turned 10. She has a grit and determination seldom seen in someone so young.

When she was in Kindergarten, she even fooled her teachers and parents into thinking she could read full books. What Carrie soon realized was that Haven was memorizing entire books and reciting them from memory. When life puts an obstacle in Haven’s way, she figures out how to overcome them in her own unique way. 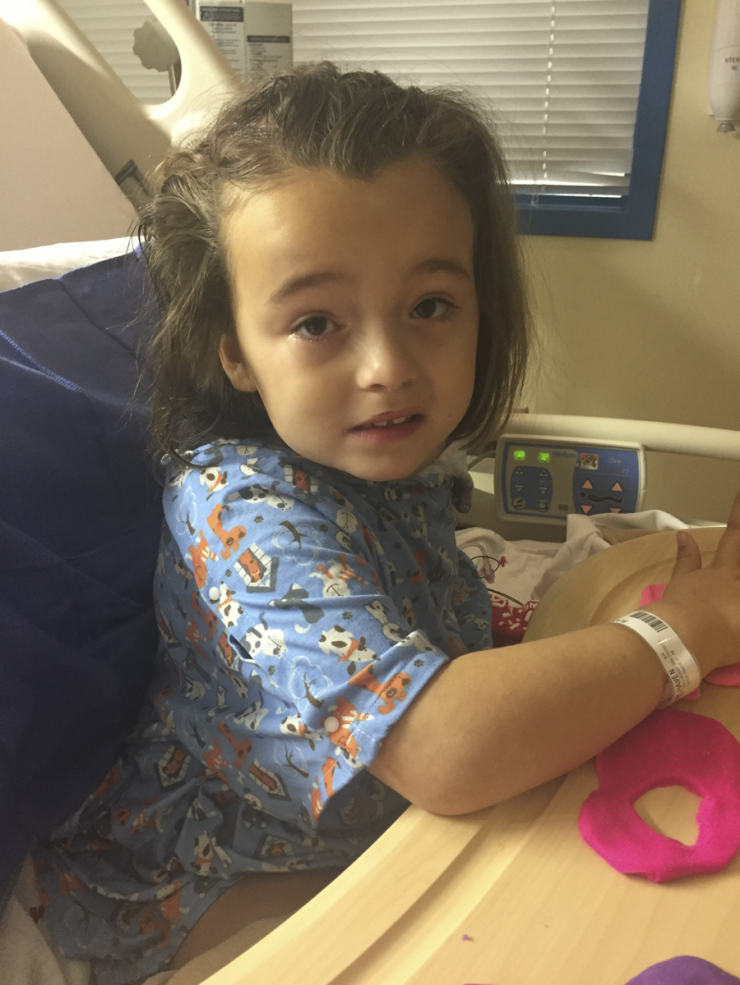 Oh. But I don’t do lonely well.

Starting in 2017, obstacles are precisely what life started throwing at Haven. The Blackshears moved to Ardmore, OK and Haven was excited to start seeing a doctor who actually had cerebral palsy herself. Dr. Jan Brunstrom-Hernandez quickly worked with colleagues to diagnose Haven with Aqueduct Stenosis. Her new doctors were shocked that Haven hadn’t undergone the ETV surgery to create a bypass for the large amount of fluid pooling on her brain. While the surgery was a success, Haven soon started experiencing severe headaches, and nausea leading to an altered mental state and constant pain. It was the worst experience of Haven’s life up to that point. But Haven bounced back, like she always does. 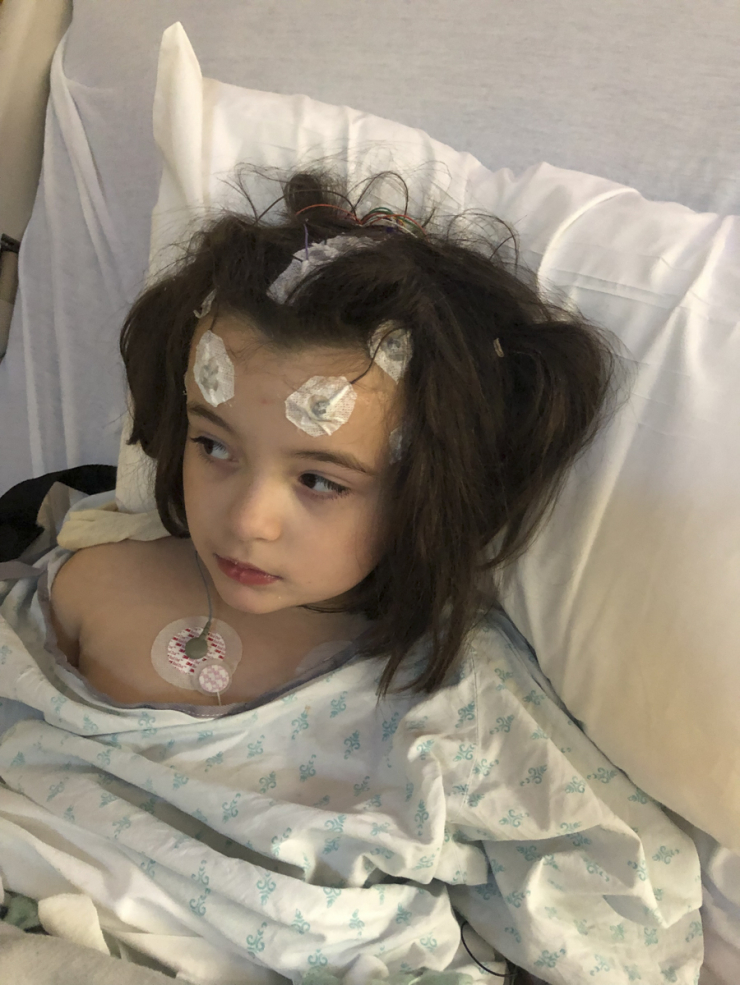 Then in 2019, after almost 9 years without experiencing a seizure, Haven experienced a major seizure that took everyone by surprise. Doctors put Haven on seizure medication and told her that she was lucky to not have experienced more seizures previously with her CP and Aqueduct Stenosis. Through it all, Haven remained positive and never lost herself in the pain and fear. 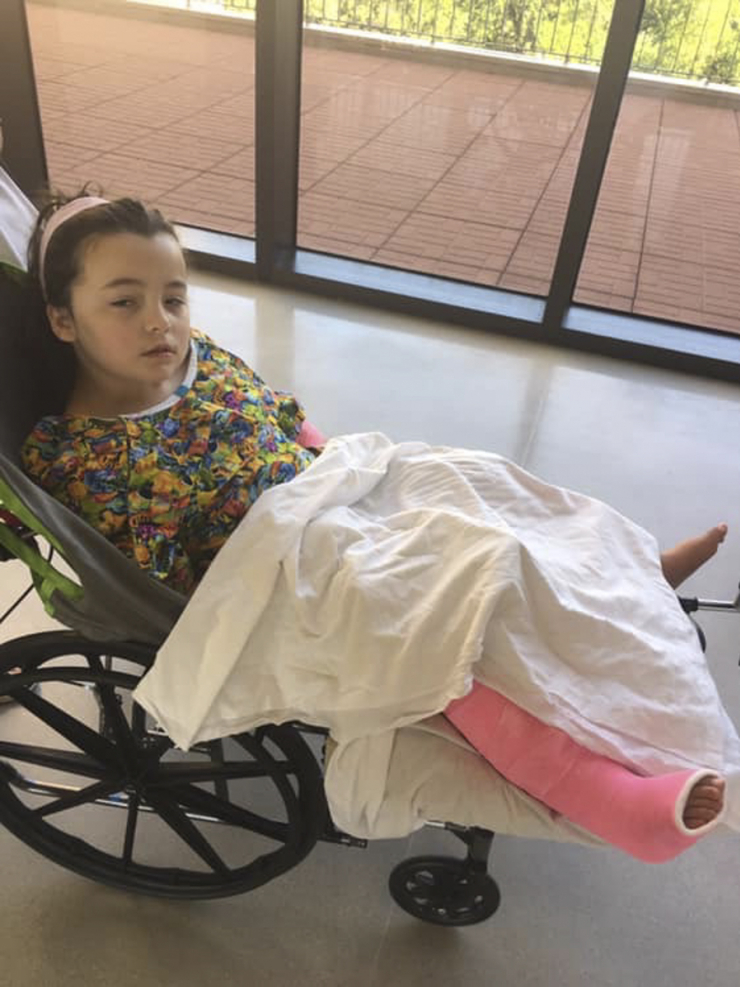 That was until she underwent major hip surgery and soft tissue manipulation in her right foot to help correct her hip coming out of its socket as she grew. After being confined to the hospital bed and her living room for over 4 months in an attempt to recover, an isolation that would push anyone to the brink, Haven’s positive demeanor started to change. 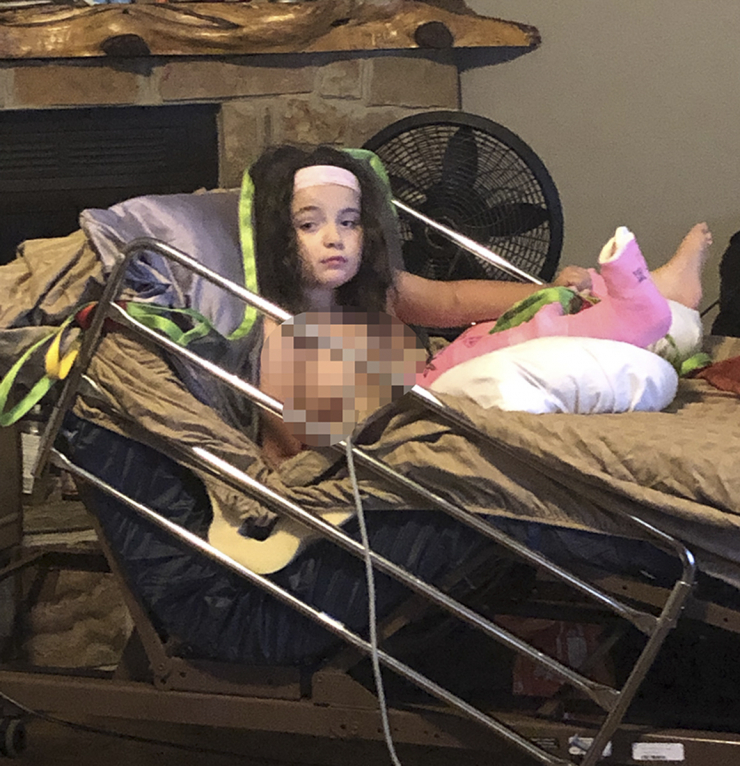 “It was the hardest thing we have ever done,” Carrie Blackshear told us of her daughter’s surgery and recovery efforts. “Haven went from being a light-hearted, laughing and happy kid to being very angry, depressed, and bitter. She told me she hated Justin and I for making her go through the surgery. 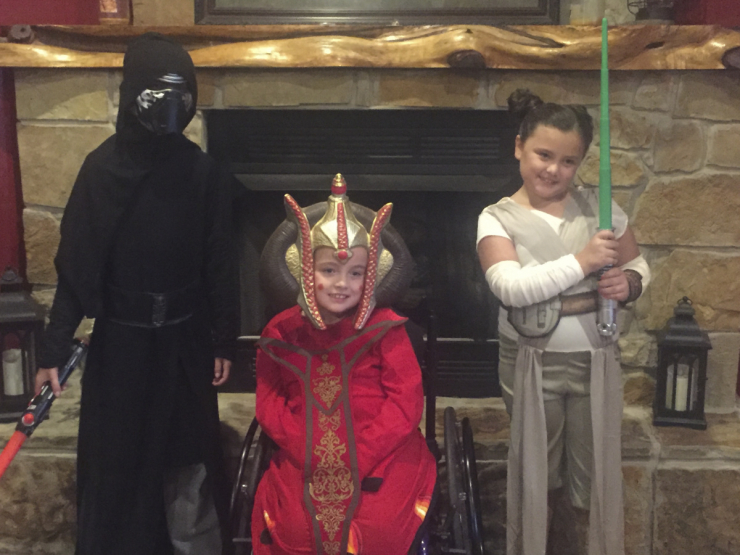 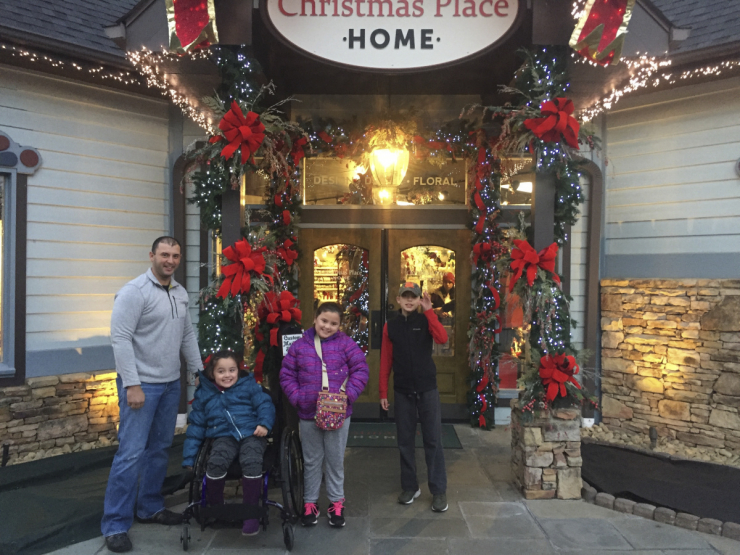 Not just by herself anymore

Haven has always been an outgoing girl. She loves getting out, going to restaurants, waterparks, and being social. That’s why her family was especially worried when they started to see the light of hope disappear from her eyes. Enter hippotherapy. 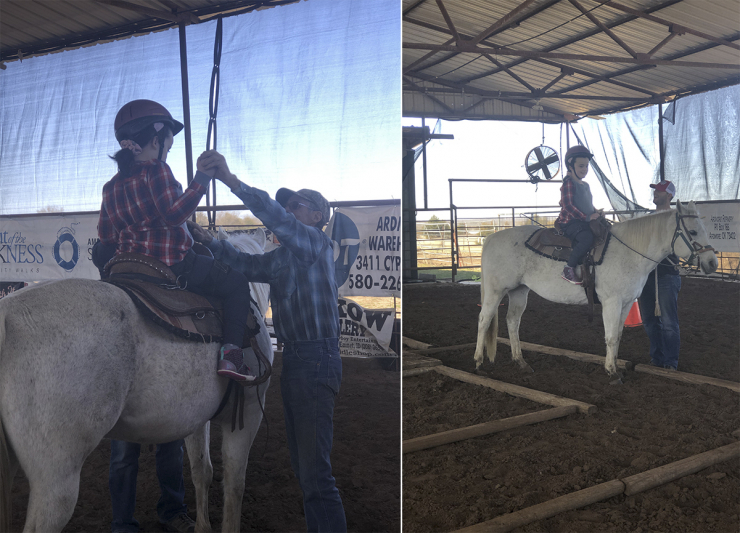 Earlier this year, Haven discovered her passion for horseback riding and started seeing the positive results it can have on her physical therapy and emotional well-being. Her family finally started seeing glimpses of the old Haven return. 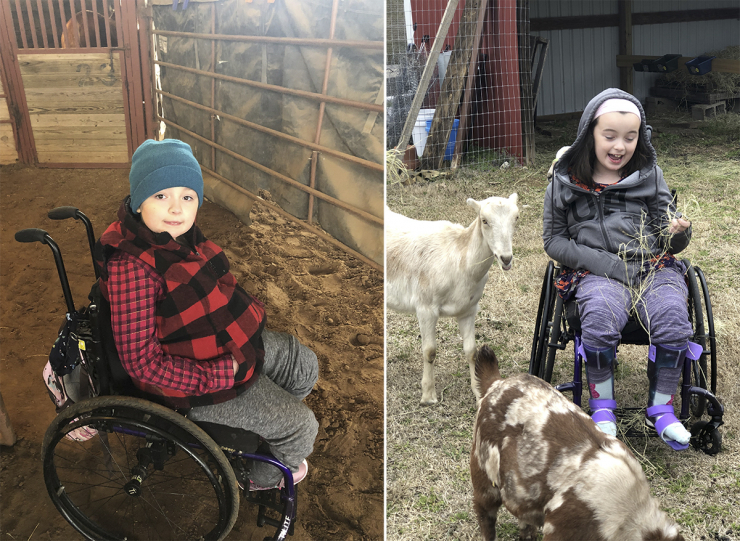 And then there’s music. Music has always been a huge part of Haven’s life. Much of her learning and memorization is based on using songs as an educational device. Music has not only been an escape from the darker moments, but it has also provided her with a soundtrack to life. One of her dreams is to one day attend a concert of one of her favorite artists: Jason Aldean and Luke Combs.

Indeed, the more Haven is able to get out and do what she loves, the better. There’s just one problem… 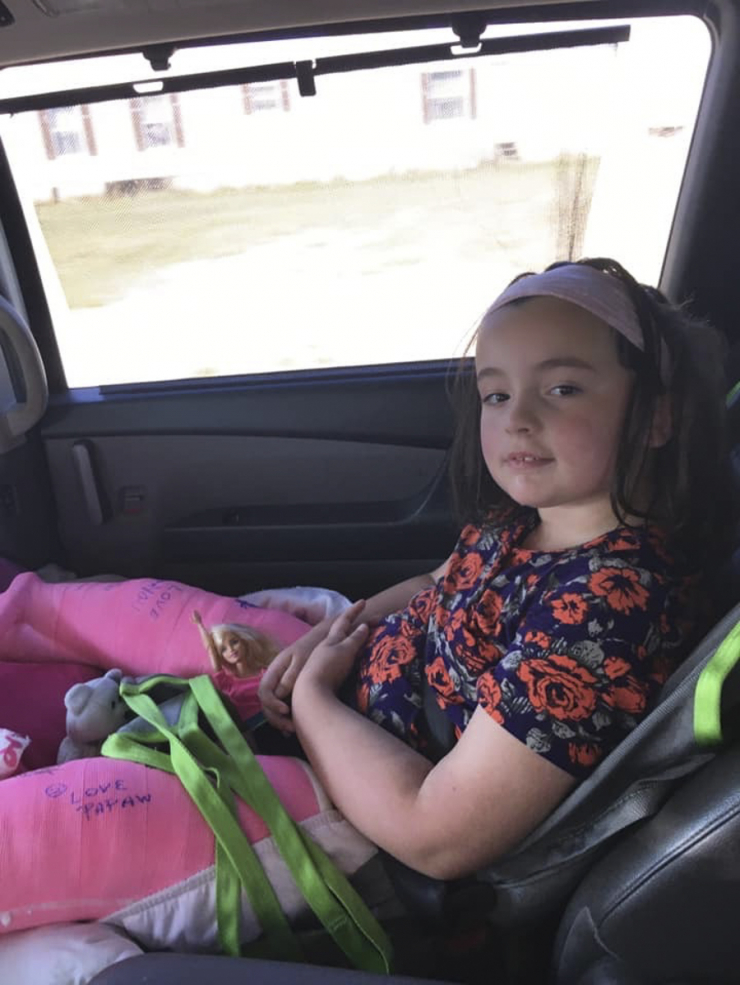 Haven is growing, making transporting her and her wheelchairs more complicated. Going anywhere has become a two-person job, and even then, safely lifting Haven into Justin and Carrie’s 2012 Honda Odyssey, with nearly 200,000 miles on the odometer, has led both parents to develop back issues. Given the limitations, Haven is confined to only leaving the house when her father isn’t working. The need for a new wheelchair accessible van is critical.

“I worry that our weakness and inability to pay for a wheelchair accessible van will inhibit her from enjoying things that she should be able to,” Carrie told us last week, stopping to compose herself and continuing with a shaky voice. “I don’t want to lose the real Haven again.” 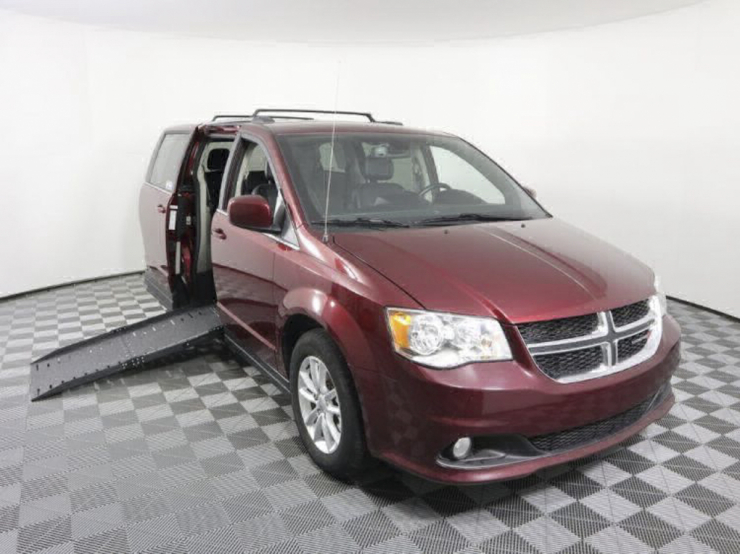 Luckily for Haven and her family, we know about 3,000 committed monthly Chive Charities donors who are more than happy to make dreams come true. With their support, we were able to provide Haven a $37,654 grant toward an AMS wheelchair accessible 2019 Dodge Grand Caravan. 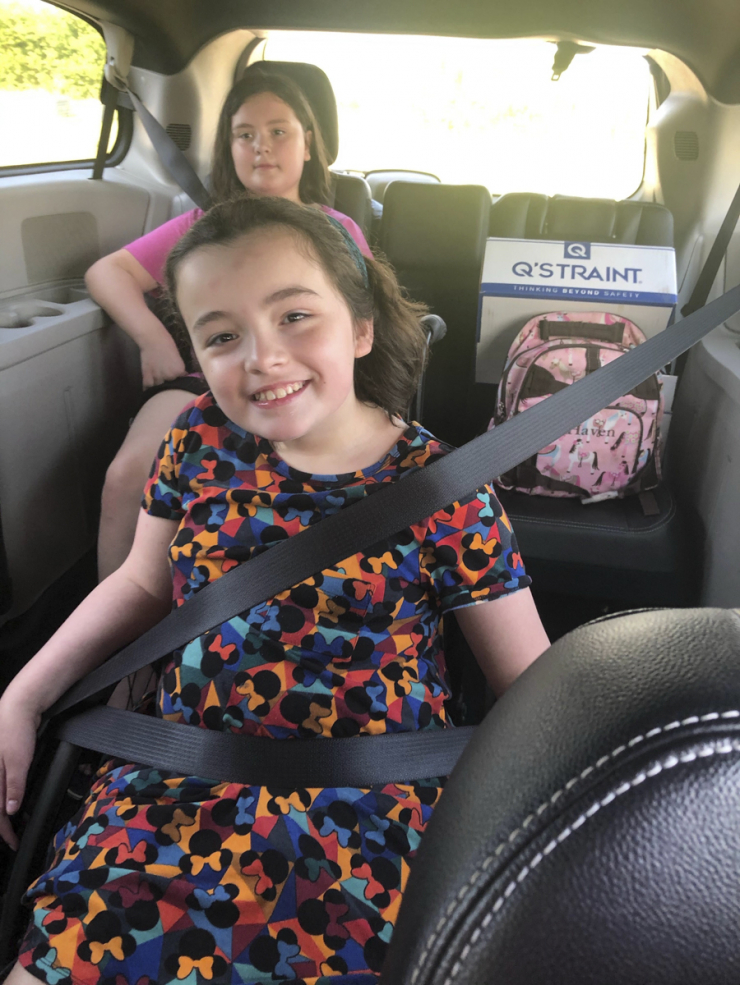 The van actually showed up in Haven’s driveway 2 weeks ago and the smile that never left her face during her first ride says it all. That signature twinkle has returned to Haven’s eyes recently. Thanks to this community of Ten Percenters, she’s ready to take on the world again in the way that only she can. And who knows? Maybe we’ll see her at a Jason Aldean or Luke Combs concert soon.

For updates on all our Chive Charities recipients and our latest efforts to make the world 10% happier, follow us on Instagram HERE

UPDATE: UMG Nashville already reached out to us when they learned about Haven and we’re told that there’s a very special package that will be arriving at Haven’s doorstep soon! We’ll provide updates as soon as we hear from the family! 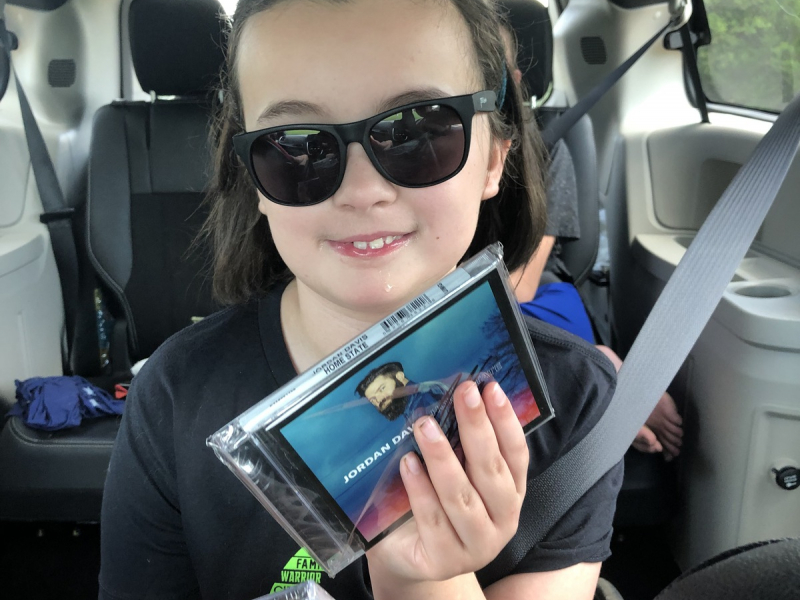