One year of physical therapy

On the Chive Charities website, front and center on the homepage, is a line that reads, “Chive Charities spreads awareness through sharing the personal stories of grit, courage, and never giving up.” It sounds good, right? But what does it really mean? 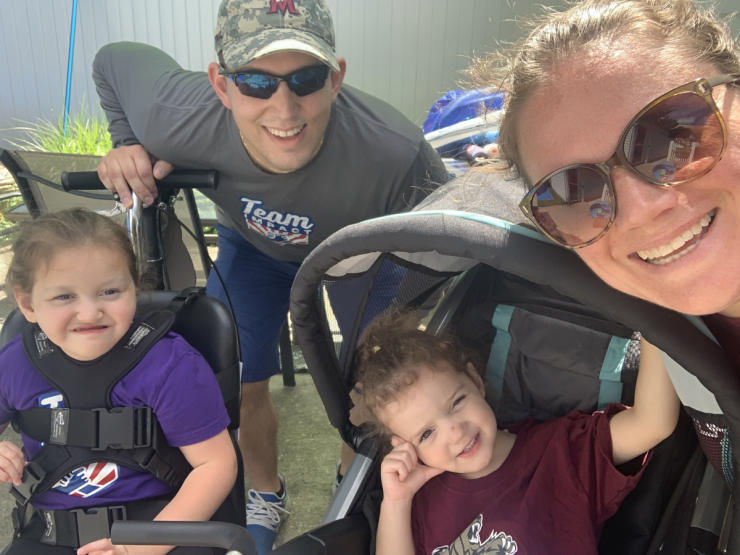 For one thing, the stories we share are often emotional, deeply personal, and inspiring. It takes incredible courage to share intimate details of complex medical diagnoses, combat trauma, harrowing medical response experiences, and more. And yet, every week, we introduce you to an individual willing to do that very thing. They aren’t just sharing with their closest friends and family, either - they’re sharing with a community of millions. Why?

Many of our recipients share a common viewpoint. Telling their stories could help someone else out there who feels alone or underrepresented or voiceless. It can literally change lives. And for the DiChiara family, that’s exactly what happened. 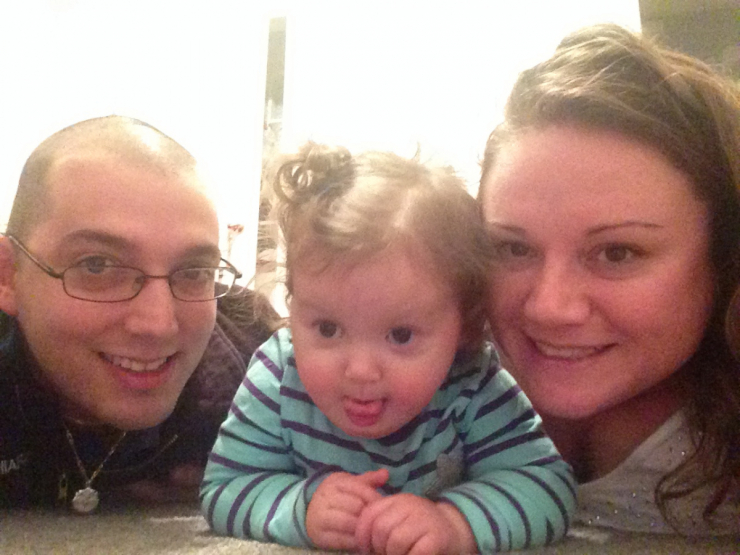 In January, we met Trish and Makily, a mother-daughter duo from Florida who were taking on the everyday challenges of Makily’s Emanuel Syndrome diagnosis, a rare chromosomal disorder that disrupts typical development.

Ironically, Trish learned about Chive Charities from another former recipient, Emma, who shared the same diagnosis as her daughter. Consider it the first ripple effect, one seemingly insignificant detail that would create a huge impact. 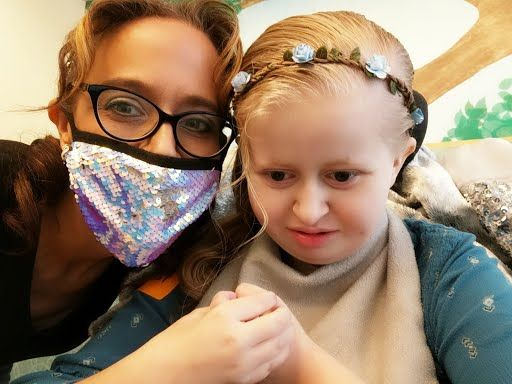 A little over 1,000 miles away, a small family in Massapequa, New York was reading theCHIVE and stumbled upon Makily’s story. Later, I got the following message in my email inbox:

“Last night when I was scrolling through the Chive App, your post immediately caught my eye. My six-year-old daughter Penelope was born with Emanuel Syndrome. Reading about Makily almost seemed like I was reading excerpts from Penelope's life story (the scary times immediately after her birth, surgeries very early in life, doctors who never had a patient with ES, hospital trips). Honestly, if it was not for the support from my volunteer fire department, it would have been a lot tougher. At this time Penelope is doing very well in school and we hope that someday, she will be able to walk and talk.

Anyways, I just wanted to say thank you again for supporting Makily and her family (as well as Emma from before) and for bringing attention to children with Emanuel Syndrome. ES is so rare and it is even more rare to come across stories of support given to other families in similar situations.

Stay safe and be well!

Pretty remarkable, right? We reached back out to Anthony and told him to please contact us if Chive Charities could be of any help to him and his family. By the time our next recipient application review came around, there was a sweet 7-year-old girl with a rare disease called Emanuel Syndrome: Penelope. 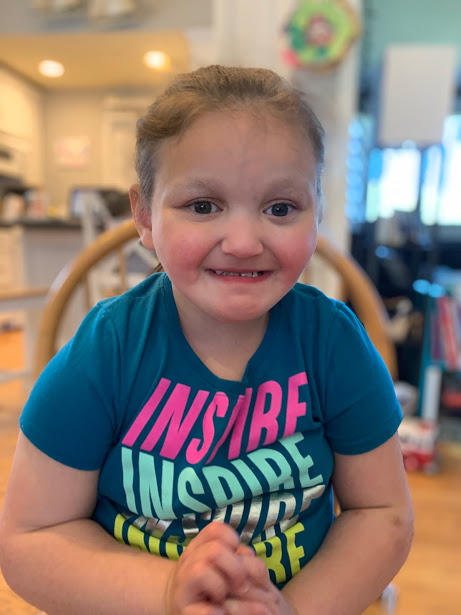 Long before we were introduced to her, Penelope was proving her ability to overcome. She started out on a rocky road, born bluish and with a cleft palate. Within an hour of her birth, the plastic surgeon was already evaluating her. Not long after, genetic testing would reveal her Emanuel Syndrome diagnosis.

“That first week was a lot,” Anthony told us. “We were thinking we might be forced to sell our house, worrying that my wife (Melissa) would have to quit her job, thinking about Penelope and what was next for her...yeah, it was a lot.” 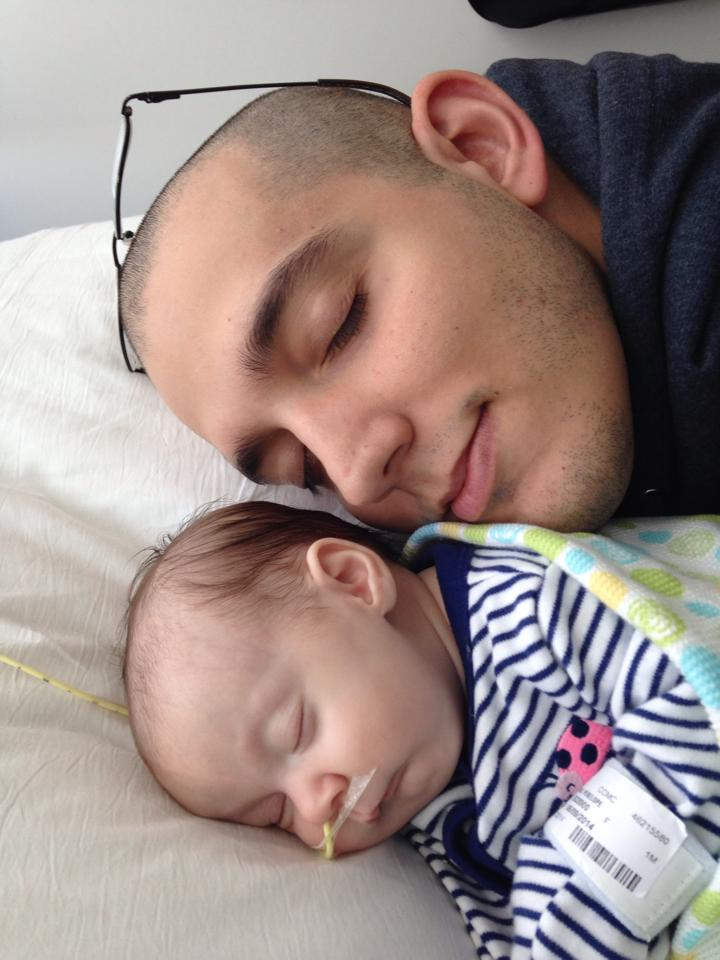 On top of that, they were handed an outdated brochure on the condition and what they could expect for their daughter. There was so little information available that Melissa told us that if they won $1 million, “we would quit our jobs and be a resource for new parents with special needs kids.” 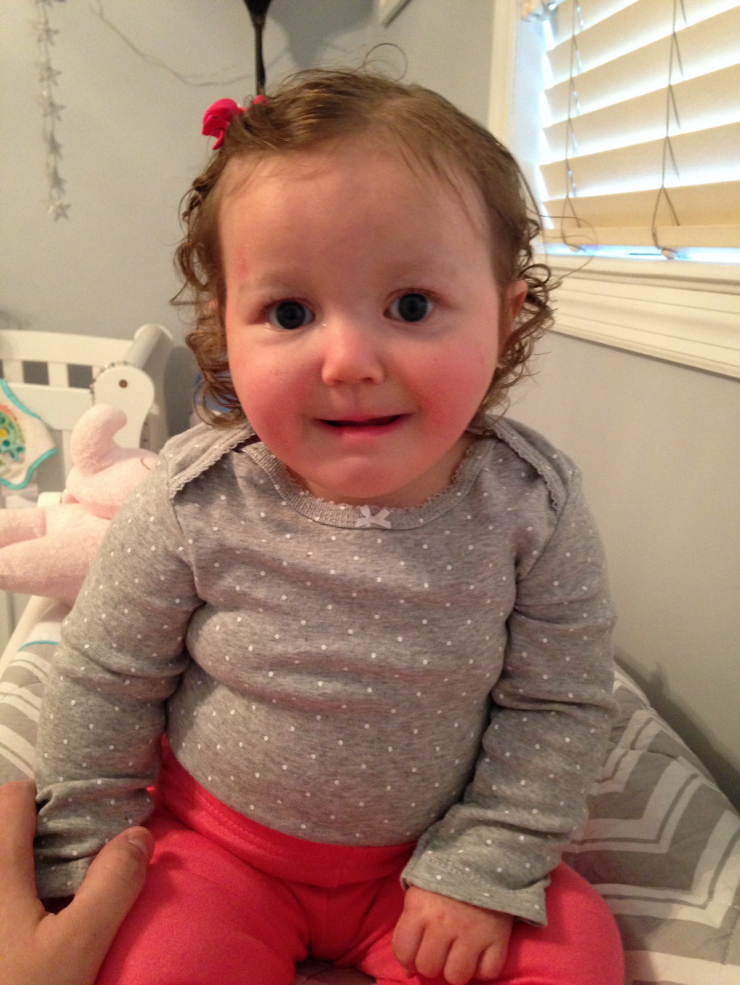 Thankfully, they were able to connect with other Emanuel Syndrome families through the national organization and founding member, Stephanie St-Pierre. The ripple effect was getting wider.

And through it all, there was Penelope with her big smile, love for music and softball, and spunky personality. “For a kid who doesn’t talk,” joked Anthony, “she makes her wants and needs known.” 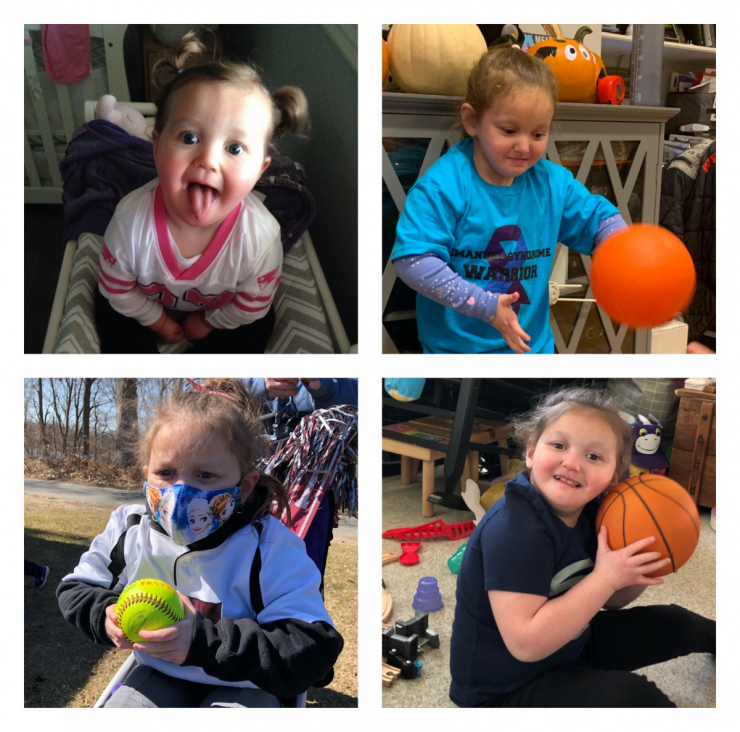 In the least surprising news ever, this service is not covered by health insurance and the family would be forced to pay out of pocket. 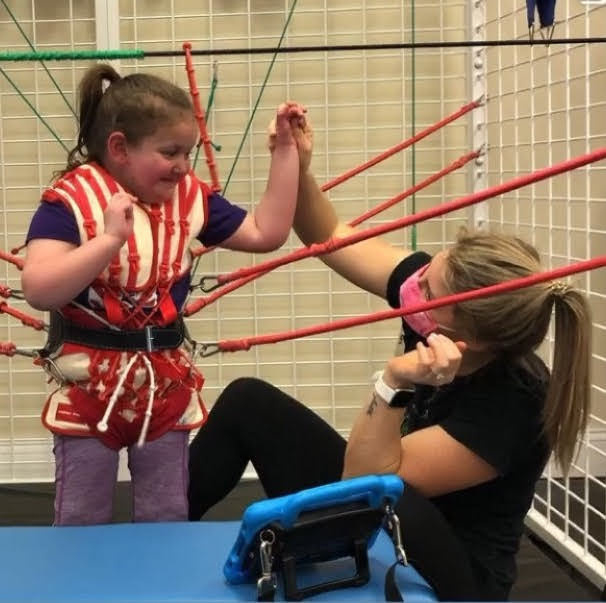 “We knew it was helping her development - we could see the physical progress - so we had to keep going,” Anthony said. “As Mike ‘The Situation’ Sorrentino would say, ‘We didn’t come this far just to come this far.’”

Cue January 12, 2021, and a post on theCHIVE that would change his family’s lives forever.

The courage of Emma’s family to share her story, then the bravery of Makily’s, all led to renewed hope for the DiChiara family. Three families faced with the same diagnosis were brought together by an unwavering commitment to spreading awareness and doing everything in their power to help their kids.

Add to that the fact that Anthony is a first responder (he works as a fire inspector and volunteer fireman in Massapequa) and we knew we had to support this incredible family. It was time to help one of our own. 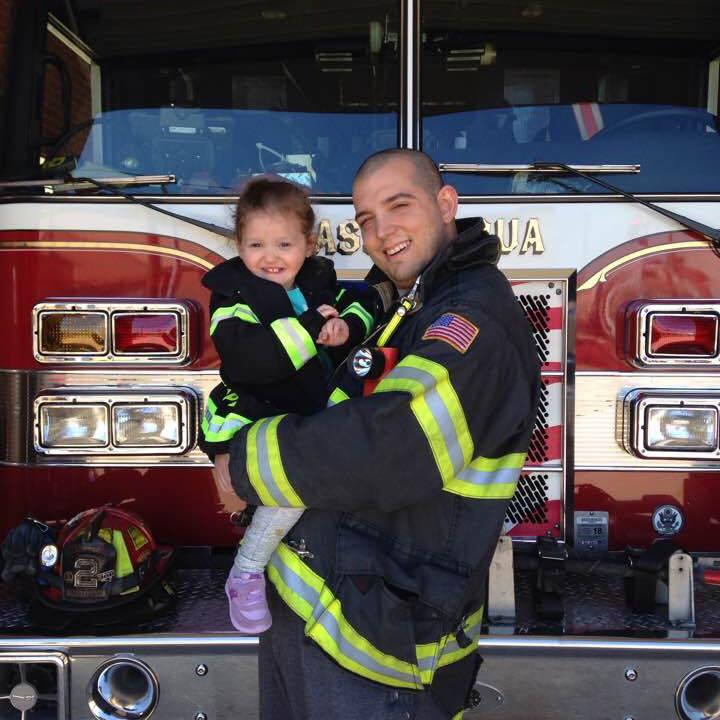 Because donors like you read these stories and commit to supporting our rare medical, first responder, and veteran recipients, we can tell Anthony and Melissa that their daughter doesn’t have to put her dreams of walking independently on hold.

We can see an application from a fireman in New York who would do anything for his daughter and tell him, “Congratulations! Chive Charities has approved your grant request.” 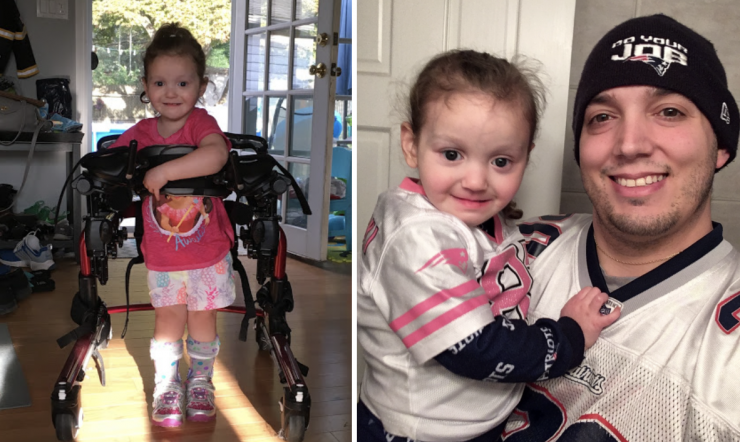 With your donations, we fully covered the cost of one year of physical therapy for Penelope for a total impact of $9,360. When she takes her first steps independently, you better believe we’ll be celebrating right along with her. 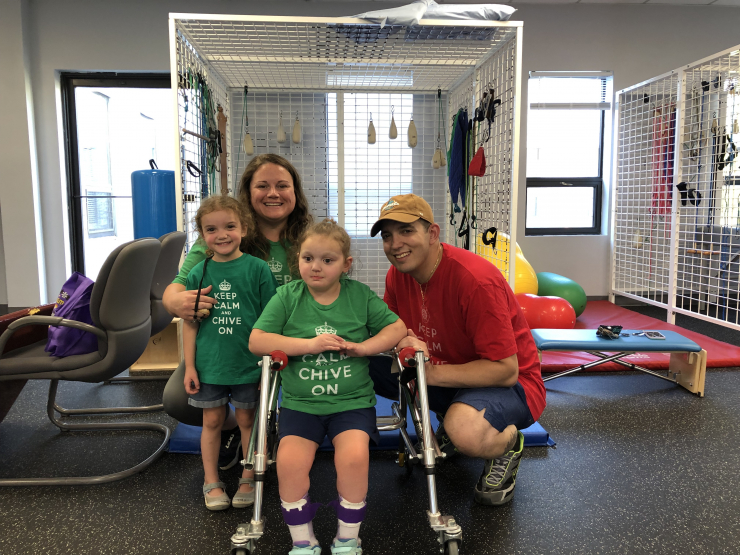 All it took was one family’s willingness to share their story. And like a ripple in the water, it spreads to touch other people who simply want to know that they aren’t alone.

Our donors make sure of that, contributing each month to help us provide a megaphone for the voiceless. It’s not just a feel-good concept that looks good on a website. It’s real, meaningful impact that changes lives. One recipient at a time, one story at a time. And today, we’re inviting you to be part of it.