Bennett is going through some not-so-basic training. 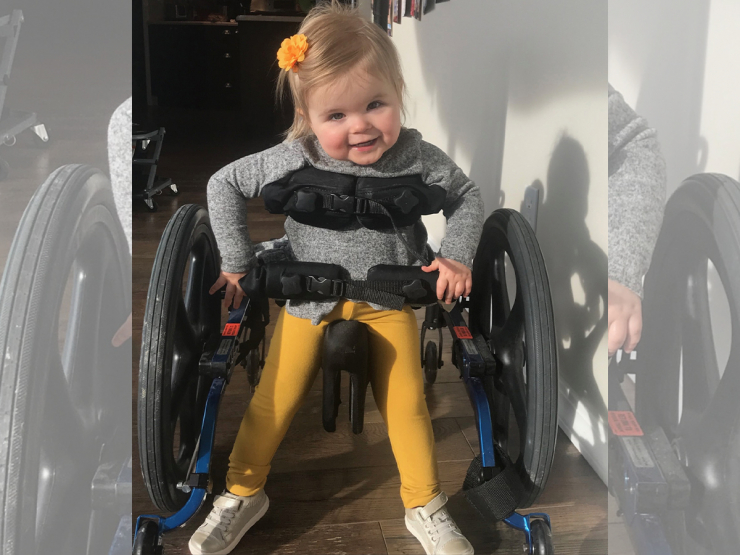 “Just go home and love her, that’s all you can do.” 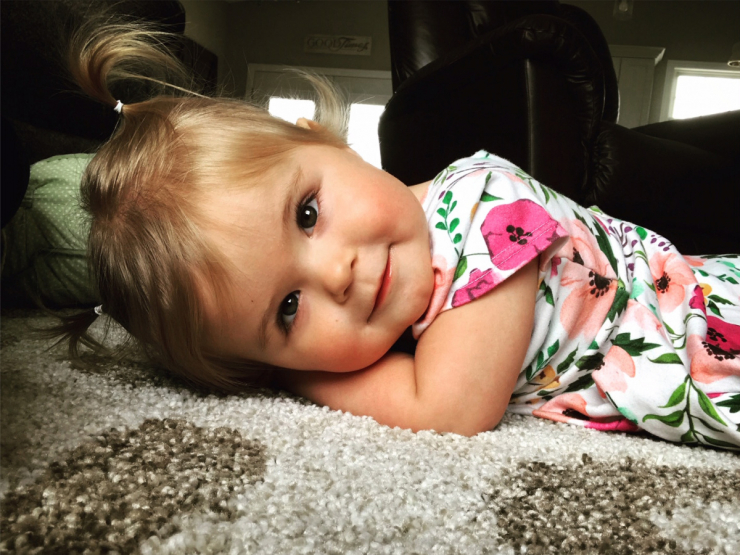 This was the advice doctors gave to Bennett’s parents when their little girl was 18 months old. Frankly, they had no other answers to offer. MRIs, EEGs, and other tests weren’t explaining why Bennett was experiencing seizure-like symptoms at random times, or why she wasn’t able to hold up her head or sit on her own, or put any weight on her legs. Nothing explained why she wasn’t making eye contact, and why it wasn’t getting any better. 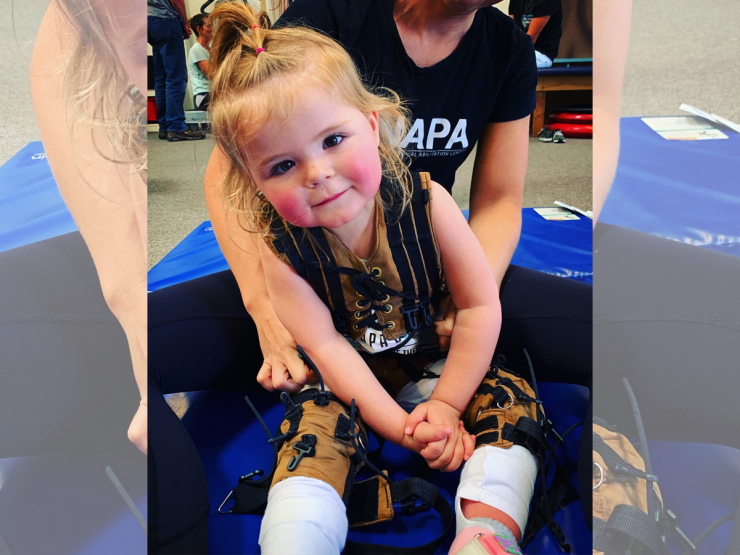 Nothing, that is, until her genetic testing results came in. The geneticists had finally found something that could explain why Bennett was struggling-- but they didn’t know what they were looking at. 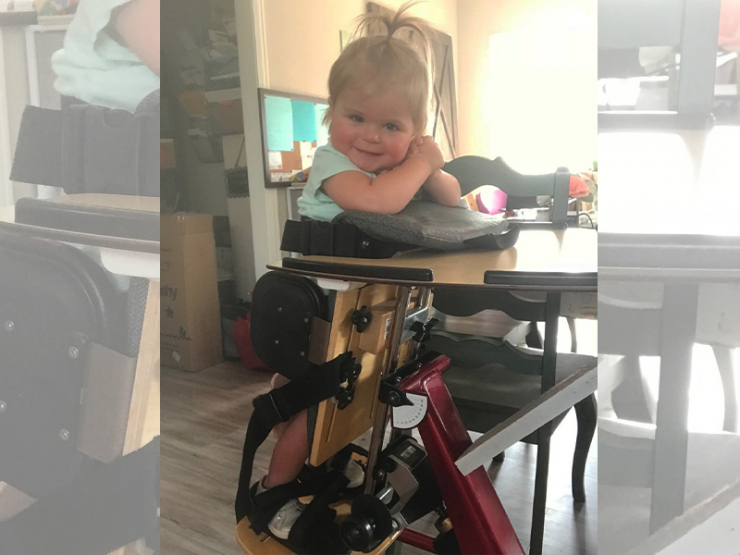 So they outsourced it. Since the geneticists in Seattle couldn’t identify her test results, they were sent around the country, then around the world, in search of an explanation for the rare genetic variation they were encountering. A researcher out of France finally produced an answer. Bennett was the seventh person diagnosed with a genetic variant of the CAMK2B gene. This variant is responsible for all of her mysterious symptoms and is the reason she struggles with motor functions. 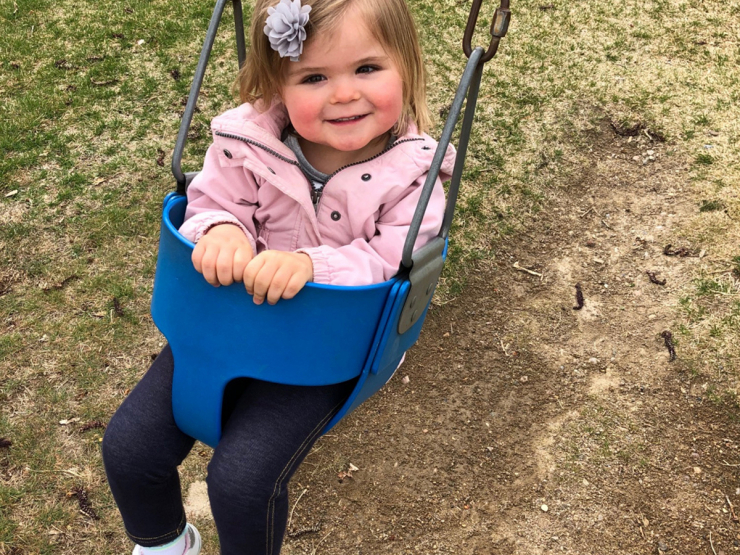 The words from the doctor echoed in her parents’ ears like a grim prophecy months later. If the doctor’s advice was meant as a warning, it was taken as a challenge. From the very start of Bennett’s life she had struggled, but she never, ever gave up. And she and her parents weren’t going to let an obscure diagnosis change that. 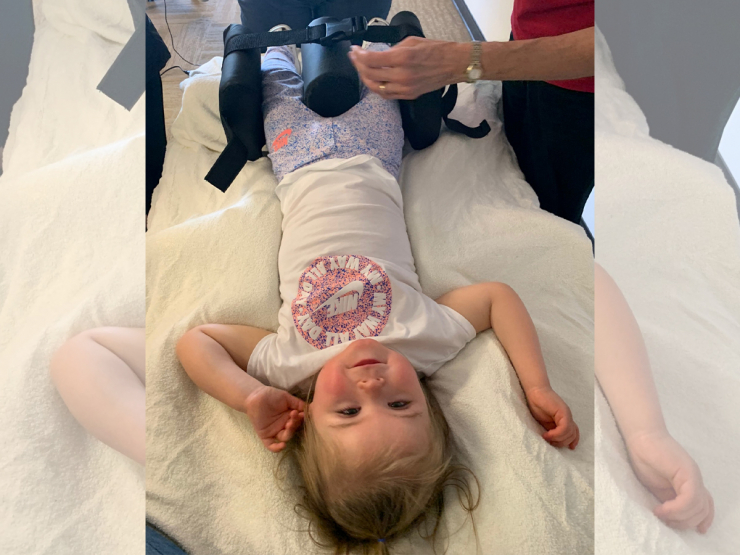 And this is when the battle truly began. We talk a lot about our recipients being warriors; they are each fighting a war every day that is all their own. Little Bennett is most certainly a warrior, and now she’s getting the training she needs for the fight against this incredibly rare condition. 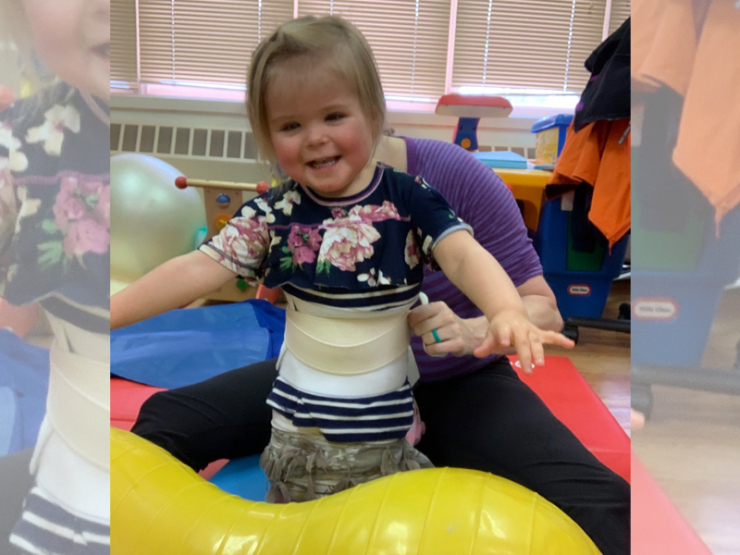 Our military Chivers know one thing for certain: there’s nothing easy about basic training. It’s the first step of many you have to conquer before you can face even bigger tasks. But it is a test of will, strength, and perseverance. Bennett, at 5 years old, has chosen to fight against her body’s will to rebel by doing INTENSE physical therapy. 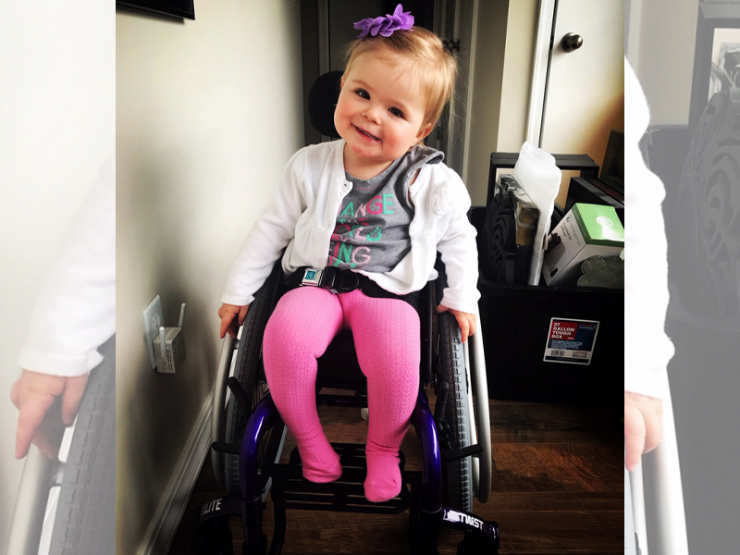 The NAPA (Neurological and Physical Abilitation) Center in California, much like your most dedicated Drill Sergeant, is not playing around. The facility offers intensive physical therapy programs for children. They are unique, though, because they are so, so hard.  Bennett was up for the challenge, and signed up for a six-week session to work on gaining mobility in her legs and strengthening her body as well as her sense of balance.

NAPA is already creating a buzz in the community of people with differently-abled children, because it works. They incorporate futuristic-looking tools (like this adaptive walker) into their therapy sessions, and the results are impossible to deny. After her six week course, Bennett was moving around more than she ever had, and was showing serious signs of improvement. 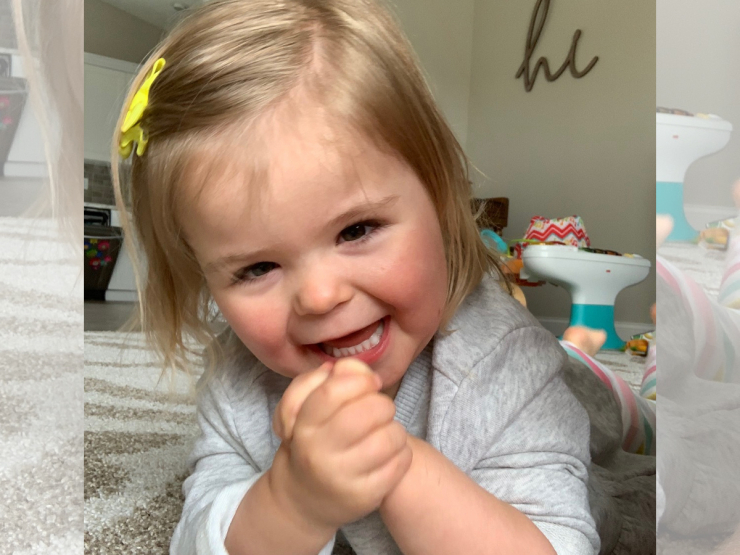 To think that a few years earlier doctors were questioning whether she would ever see, much less walk… is astounding. Bennett put in the grueling hours, the tears, and the physical exhaustion necessary to make progress in the course, and that’s why she is seeing results.

Just like new kids at boot camp, she doubted her abilities at times. Some of the exercises, like this balance board contraption, run counter to her body’s natural state so intensely that all she can do is shake her head “no”. Just like at boot camp, though, no one goes through it alone. And Bennett is no different; she has her family behind her 1000%, as well as the camaraderie of her fellow kids at NAPA. In fact, her entire community in small-town Montana know and adore her. No neighbor can pass up an opportunity to encourage her or make her giggle at any chance. 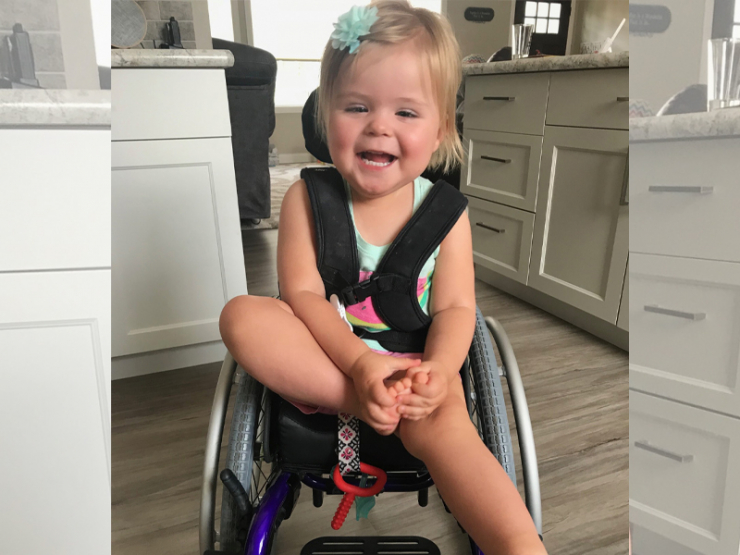 It takes an army sometimes. The battle Bennett fights is grueling, but she is blazing new trails for other kids affected by genetic conditions, just by being her strong, perseverent self! 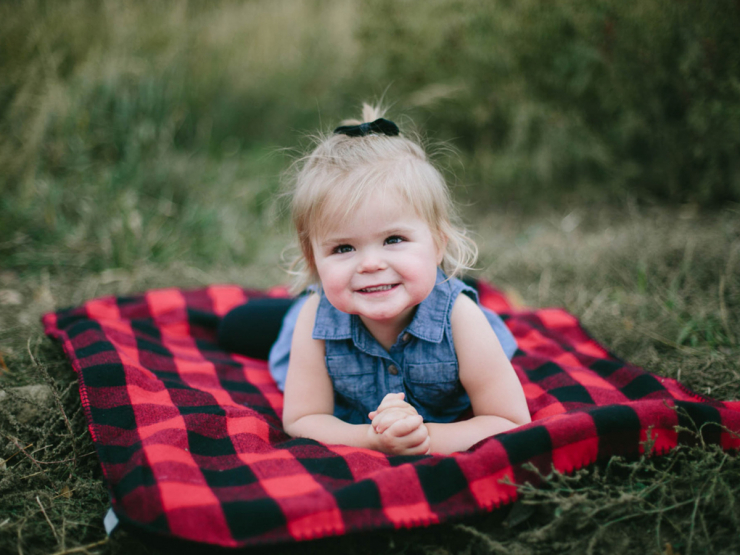 You know how much Chive Charities loves an underdog, especially one who is working so hard to make her life better. So we did that thing we do… With the amazing contributions of our donors, we are sending Bennett back to NAPA Boot Camp for six weeks with a grant of $4,600! She has so much fight in her little body, and we know there are great things in her future, she just needs a little help from her fellow soldiers. 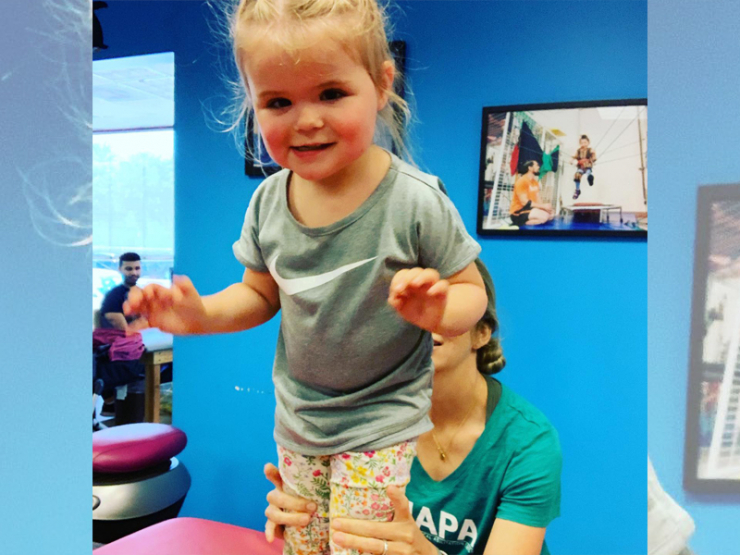 Bennett had her dedicated parents, brother, and community on her side already, but now she’s got all of you lovely people there for her, too. With this grant, our donors are helping Bennett build herself a better future from the ground up. There’s no roadmap for someone with a condition so rare, so it is up to those who love her and care for her to help her find her way through this battlefield. 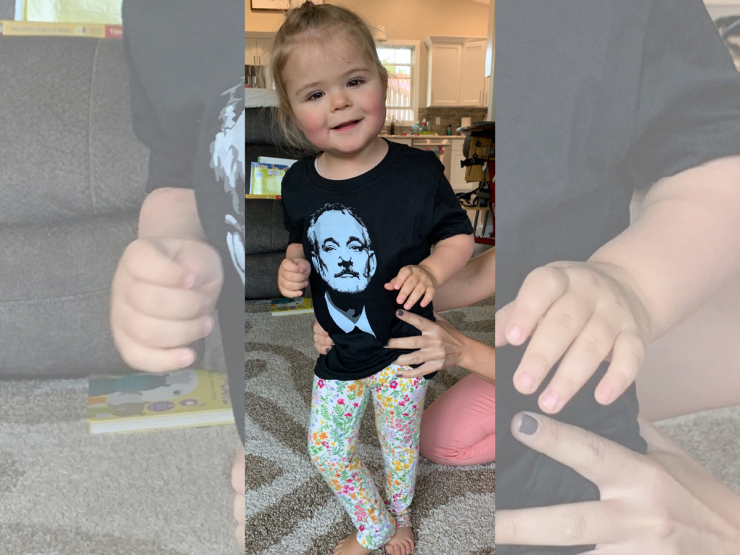 None of us gets through life’s battles without help, and the same is true for all of our beloved underdogs. For those of you who have ever received help, be it a hug or a favor or a sandwich, consider paying it forward through a monthly Chive Charities donation. And for those of you who never received the help you needed, and who felt alone in life’s hardest times… be the person you needed in those days. Get busy making the world 10% happier as a Chive Charities monthly donor HERE! 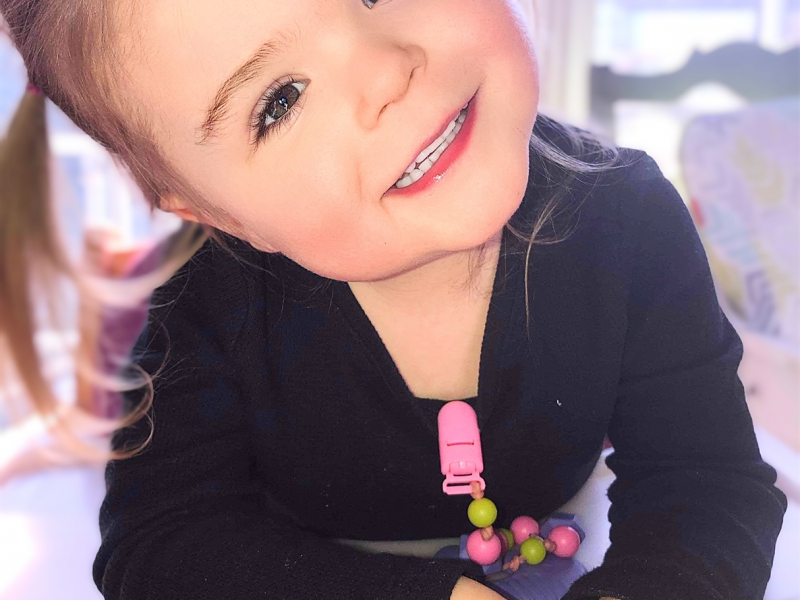