His bones are fragile, his spirit is not.

As all new parents will tell you, the first screams of a newborn child are a welcome relief. But for Vicky and David Martin, Isaiah’s first cries were more ominous.

Nurses and doctors crowded around the baby, eyes scanning his soft pink skin and tightly balled fists. A fine layer of light brown hair covered his head, and blue eyes peeked out through half-closed lids. His tiny chest rose and fell with every breath. But here he was, breathing.

That was never a given. 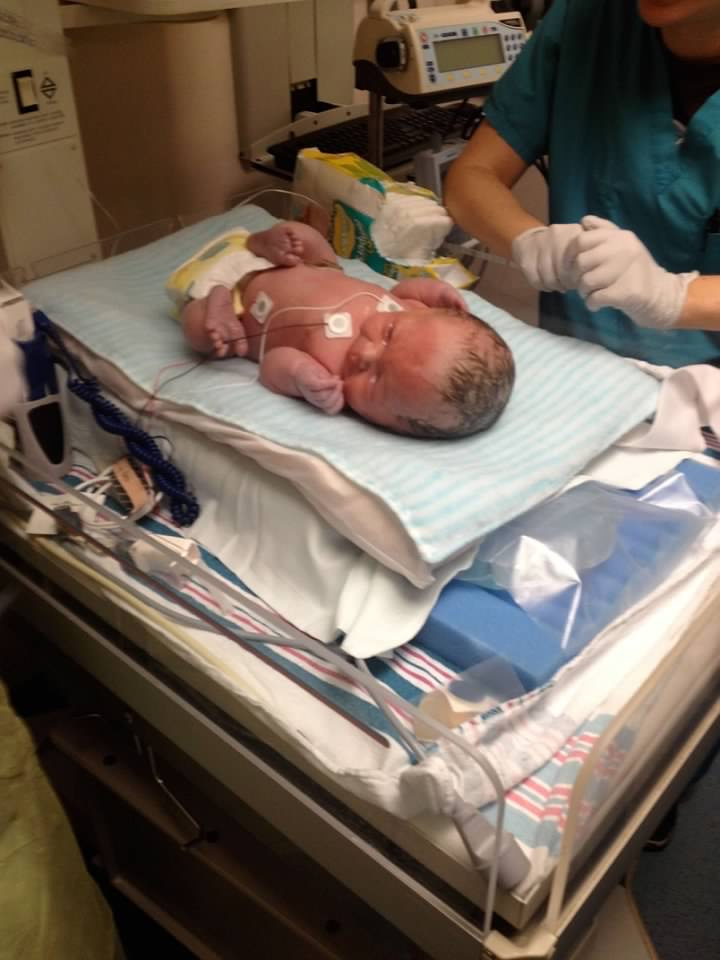 A few months earlier, the Martin’s were halfway through a normal pregnancy when an abnormal ultrasound appointment changed the course of their lives forever.

“We went to our anatomy scan, excited to find out if it was a boy or girl,” Vicky told us. “But our world came crashing down when the doctor explained that there was a problem and ‘it could be lethal.’ That word, lethal, still rings in my ears to this day.”

A visit to the maternal fetal specialist confirmed what the ultrasound tech suspected that day: their baby had Osteogenesis Imperfecta (OI) or brittle bone disease.

OI has many different forms, some severe, some life-threatening, and even some that are milder. Isaiah was born with type III, the most severe form in babies who don’t die as newborns. 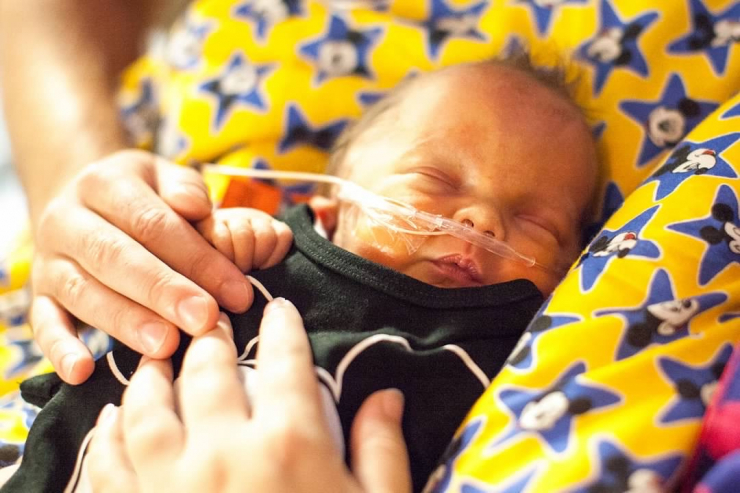 “While we were delivered such a grim diagnosis, Isaiah was doing flips inside of me,” Vicky said. “I laid on that bed for hours getting an ultrasound. The tech and doctor were amazed at how my baby’s head changed shape with a push of the ultrasound wand, and they pointed out numerous fractures and curved bones. But when my husband and I looked at the screen, we saw our baby had the hiccups. We saw ten adorable toes. We saw Isaiah, and we believed in him.”

They were faced with the fragility of life, and yet they stood strong, an unbreakable bond already formed.

On that early Sunday morning in August 2013, Isaiah was born with more than 12 fresh and healing fractures, but not long after, he looked like this: 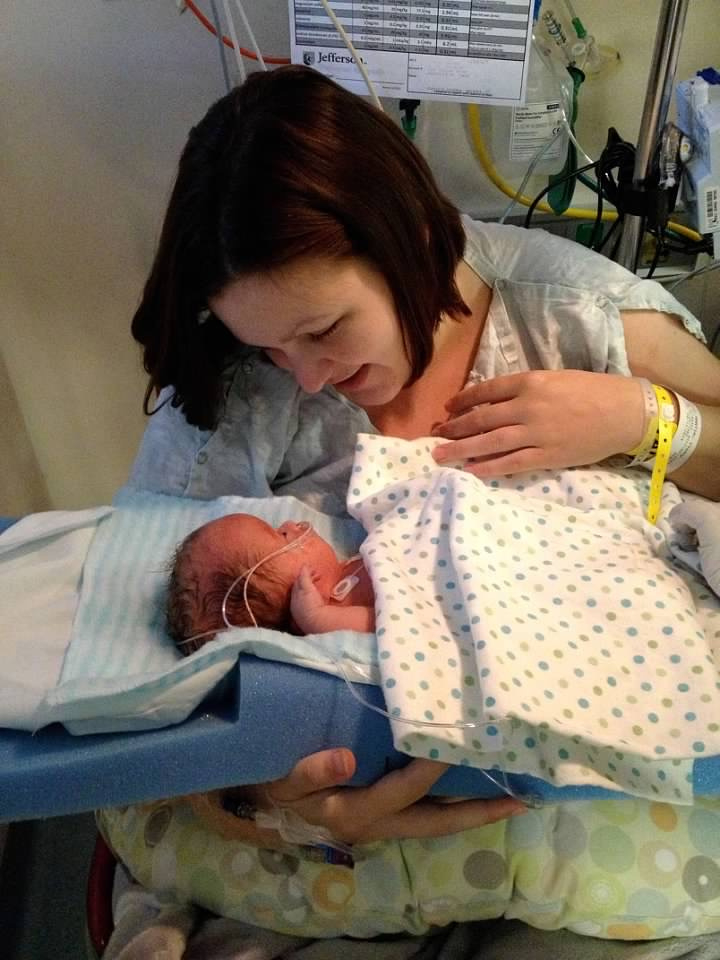 Calm and soothed in his mother’s arms. An unbreakable bond already formed.

Eventually, Vicky and David searched online and came upon a support group for parents of kids with Osteogenesis Imperfecta. Through that group, they were directed to another children’s hospital, Nemours/AI duPont Hospital for Children, located in Wilmington, Delaware. It would become a second home for the family, and one of Isaiah’s favorite places to be (not kidding, he truly loves it there). 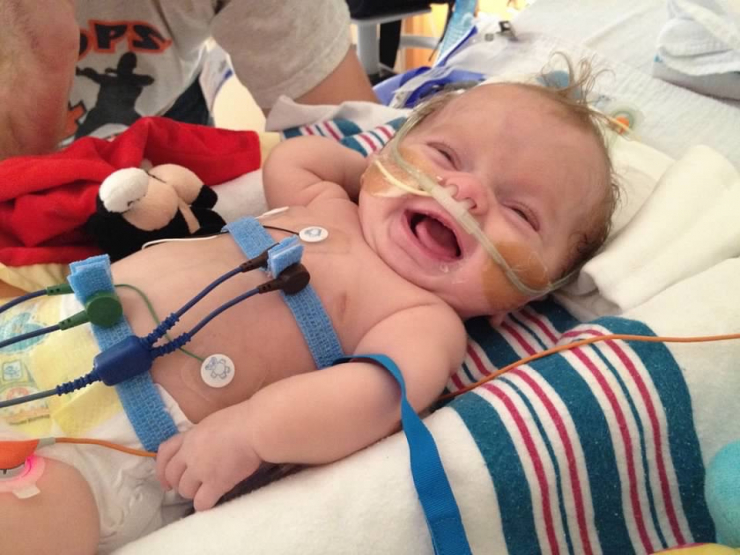 It’s a good thing he does, because unfortunately, much of Isaiah’s life has happened within its walls. In his short seven years of life, Isaiah has broken nearly 150 bones, each as painful as the one before. If you’ve ever experienced a fracture, you can empathize with what he must feel, and it never gets easier for these OI warriors. They’re truly the toughest of tough. But Isaiah’s fragility doesn’t end with his brittle bones — it’s caused plenty of other unforeseen challenges, too.

Isaiah was diagnosed with communicating hydrocephalus around the age of 1 and had surgery to place a shunt shortly after.

He’s had nine surgeries now, including the placement of his shunt and port and also the addition of some metal rods to act as internal splints. He also has regular follow-ups with the OI clinic, ENT, audiology, pulmonology, neurosurgery, orthopedic surgery, spine specialists and endocrinologist. 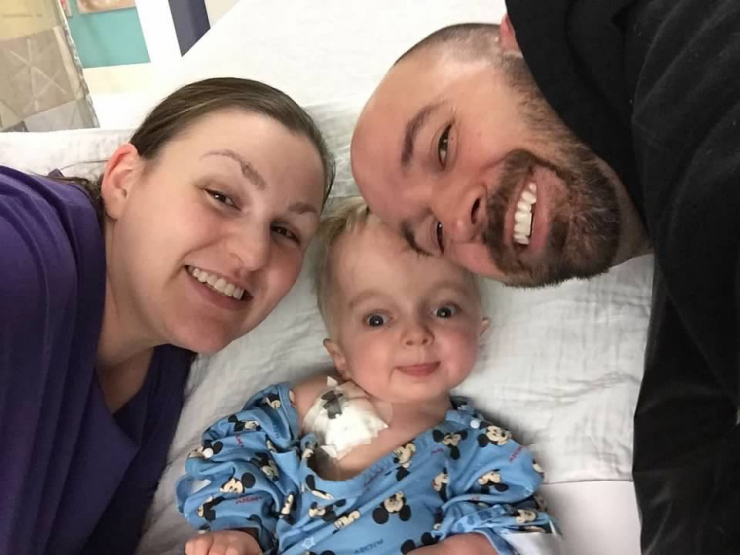 So yes, suffice it to say that Isaiah is very familiar with duPont.

What’s incredible about Isaiah is that despite the many obstacles he’s faced, he approaches life with an optimistic attitude that’s difficult to qualify. An unbreakable spirit. 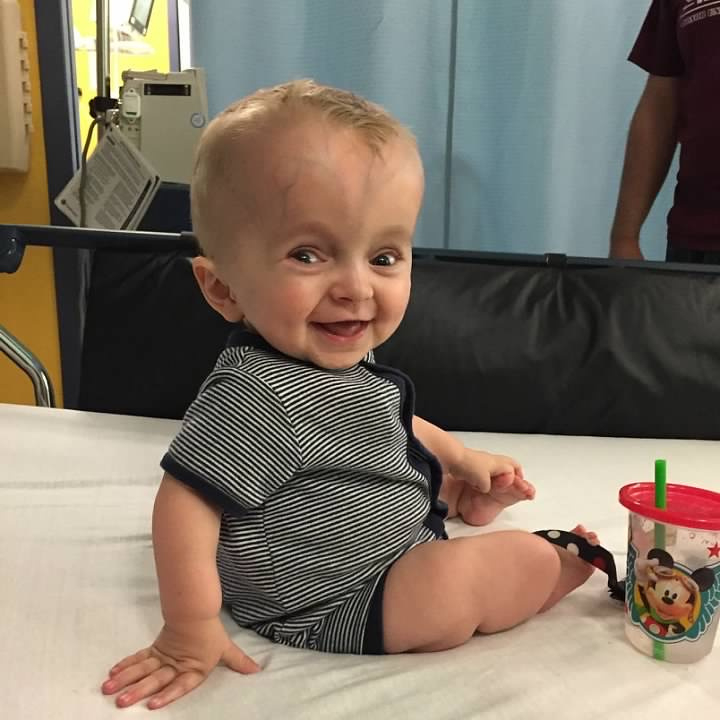 Just last year, Isaiah upgraded from the manual wheelchair he had been using since his first birthday to a new power chair. This kid is all boy, and once he started elementary school, it quickly became apparent that he needed a little more power to keep up with his friends and maintain his independence.

He’s also borderline obsessed with elevators, which works out well since he’s a full-time wheelchair user. 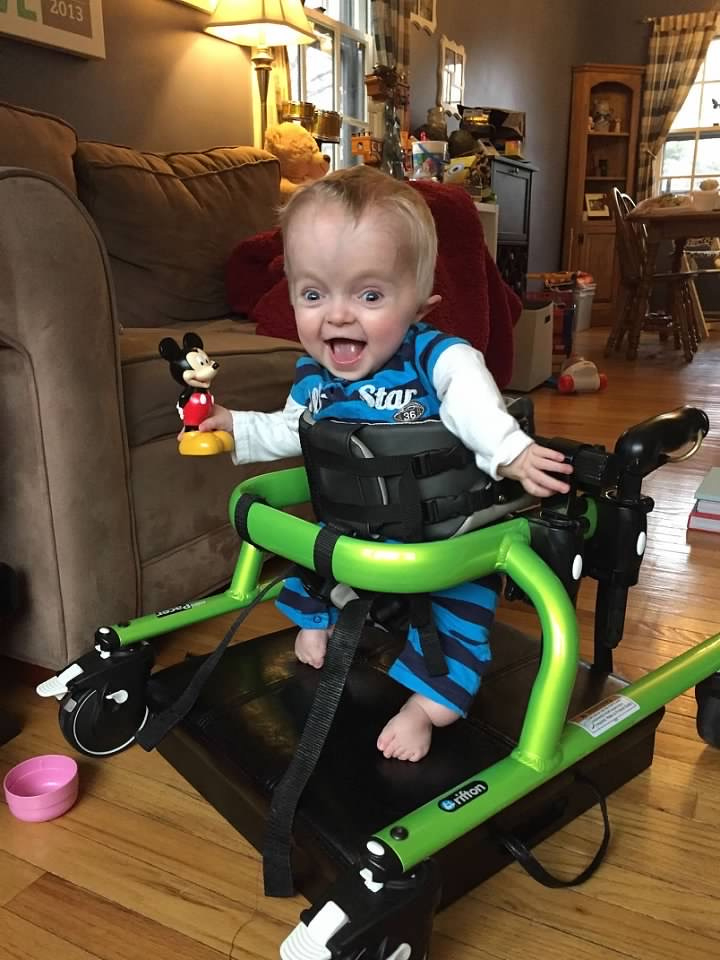 “Isaiah has been dying to reach the buttons in elevators for years,” said Vicky. “But they are out of his reach in his tiny manual chair. Once we got his new power wheelchair, he’s been able to practice a lot in our driveway and backyard, but he can’t wait to use it to visit family (socially distanced, of course) and doctor’s appointments (mostly so he can ride the elevators).”

“But not long after, we realized we had an issue,” Vicky told us. “Apparently, the SUV we own can’t handle any type of lift. We started to look into purchasing a used van, but thanks to the COVID-19 pandemic, Isaiah’s dad, David, was laid off and our search came to a screeching halt.”

Unfortunately, like so many others impacted by Covid, The Martins quickly went from a one-income family to a no-income family. Thankfully, last month, David was able to find work again and started a new full-time job, but it was a terrifying time for the family. 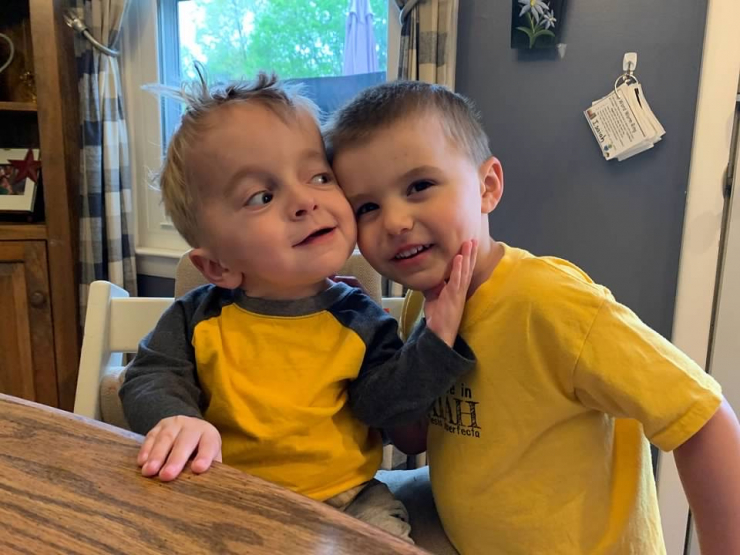 The fragility of life.

As if that wasn’t enough, Isaiah’s condition causes him to break a bone 1-2 times per month. Think about that, even as an adult, breaking a bone once every two weeks. And if Isaiah breaks an arm, it makes using his manual wheelchair independently nearly impossible on his own, which increases the need for him to use his power wheelchair instead — and have a way to transport it. 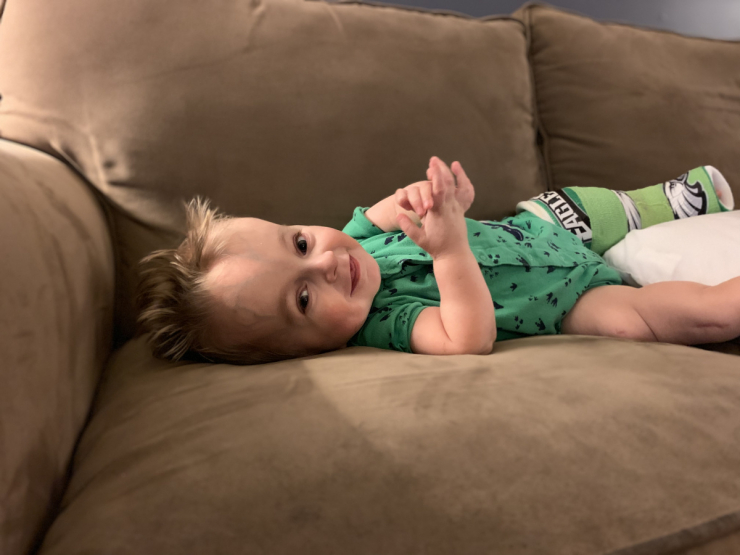 Luckily, in that same OI support group they first joined after Isaiah’s birth, they met Zoe Lush and her family. It’s hard to forget Zoe, but if you’re new to Chive Charities or simply need a refresher, she was the first of our now 220+ rare medical recipients to receive a grant.

Like Isaiah, Zoe was also diagnosed with Osteogenesis Imperfecta Type III, and also like Isaiah, she stole our hearts with her bright and cheerful personality. The two were fast friends. 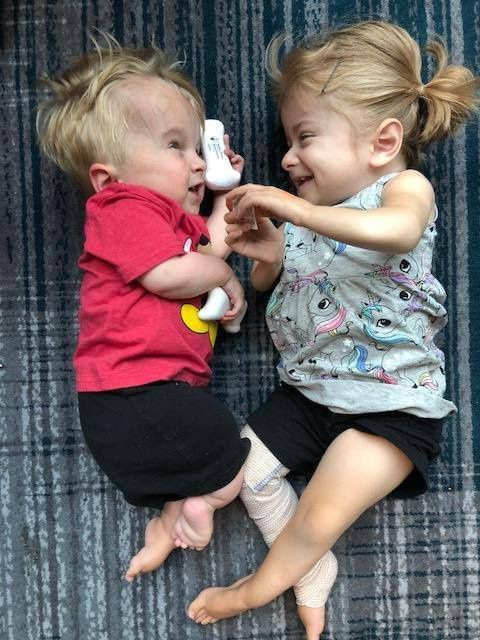 Hannah B. is another, and she and her family donated adaptive equipment and other items to Isaiah after she outgrew them. Like our community, these guys know how to pay it forward. 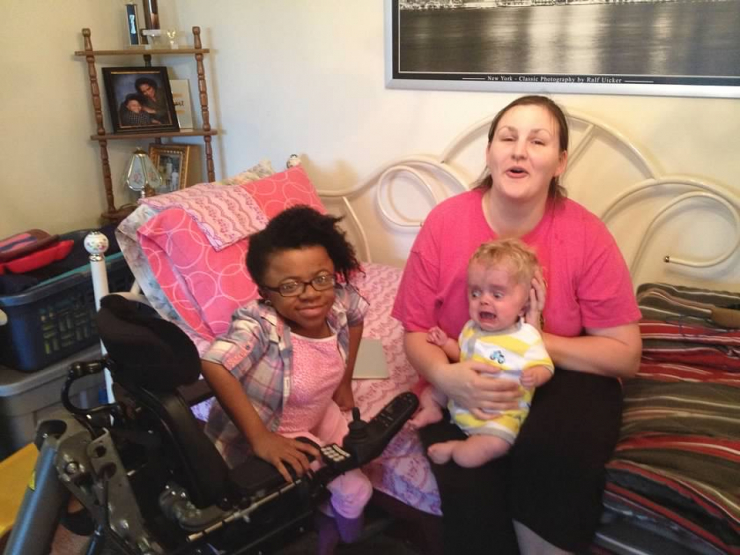 (As you can tell, Isaiah was a little overwhelmed that day. We’ve all been there, buddy!)

So when Vicky and David realized their current vehicle wasn’t going to cut it, they heard from the Lush family and a few other OI friends that Chive Charities might be able to lend a hand. After all, wheelchair-accessible vans are kind of our thing.

And we love an unbreakable spirit. 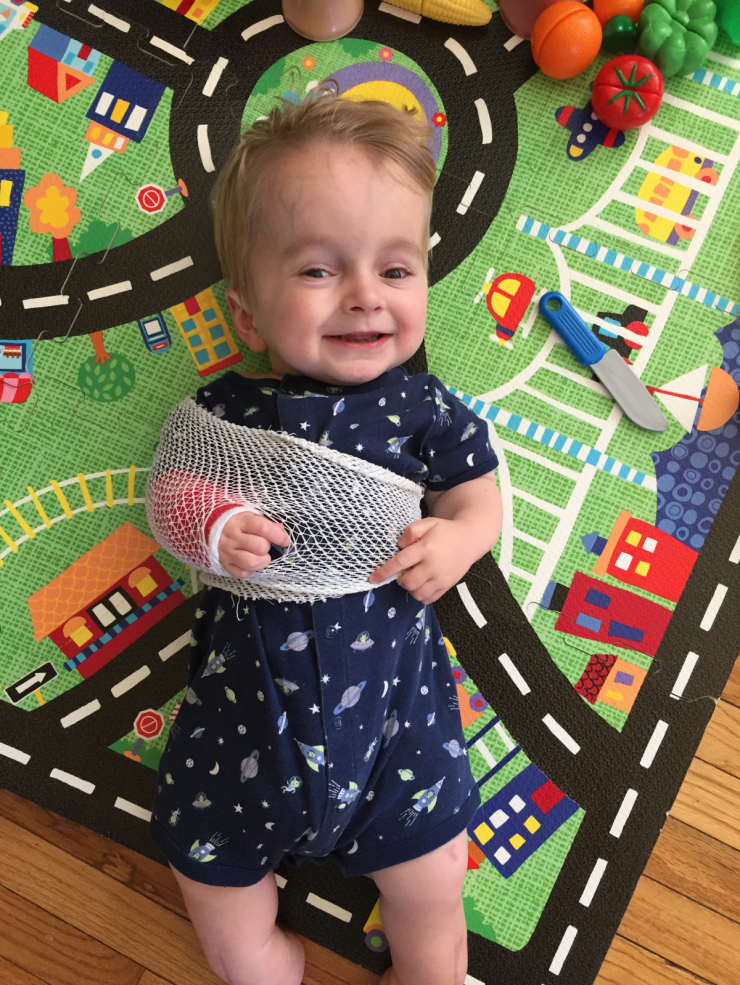 So, as part of Chive Charities’ first-ever Giving Tuesday campaign, we partnered with our long-time friends at STRATACACHE on a life-changing grant to fund Isaiah’s new ADA accessible vehicle. We launched the initiative with the goal of raising $50,000 total, including a jaw-dropping $25,000 dollar-for-dollar donation match from STRATACACHE.

Isaiah was getting his van. 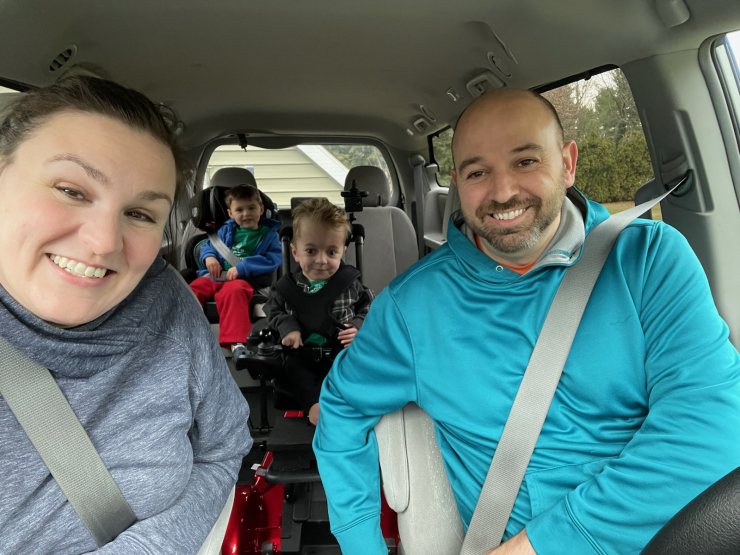 This past weekend, the Martin family’s 7-year dream became a reality, and Isaiah’s ticket to independence made the final turn off the street and into his driveway. Finally home.

The delivery was successful thanks in large part to the STRATACACHE Brands Marketing Director, Meghan Thompson (and her amazing daughter, Jane), and members of theCHIVE Philly — one of Chive Nation’s most impactful bonafide chapters (including Trish Nicole, Marcus William, Priscilla Jarrell, Lizz Maldonado, and Lance Reynolds) — who selflessly donated their time and energy to bring the dream to life. We can’t thank them enough for making the day so special. 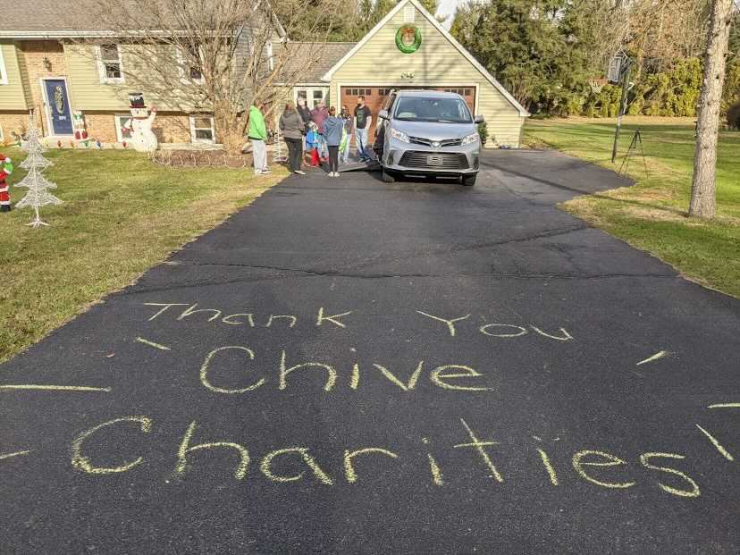 “This grant is a huge blessing to our family,” Vicky said. “Because of Chive Charities, Isaiah will be able to be completely mobile wherever we go for the first time in his life.”

For a boy who loves elevators, we think things are looking up. 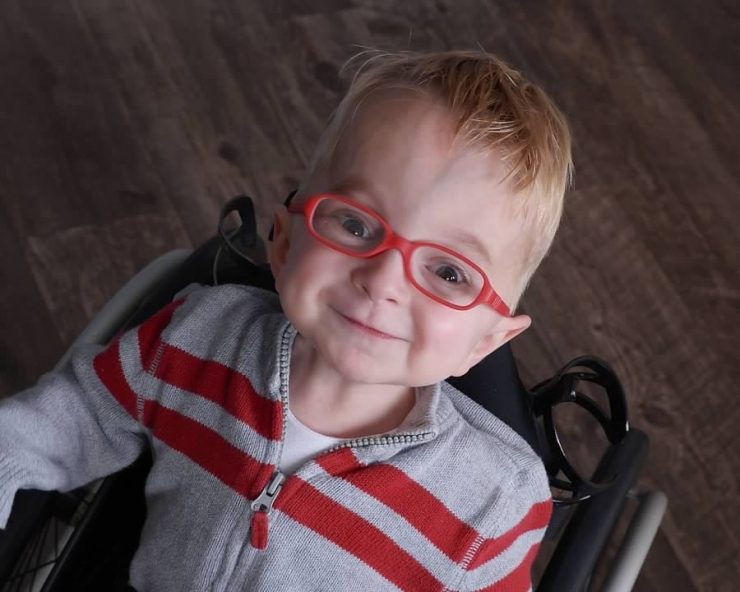 Isaiah and Zoe have demonstrated the power of community — what it truly means to have people in your corner, constantly rooting for you. And above that, to have people who would do anything to help you. It’s not something to take for granted. We certainly don’t.

Our Chive Charities donors are the lifeblood of our organization. They’re the people in your corner, constantly rooting for you. And above that, they’re the people who would do anything to help. The impact of this campaign is far-reaching. We had the opportunity to help one more worthy recipient, to give a nod to the fragility of life while countering with our own unbreakable support system. 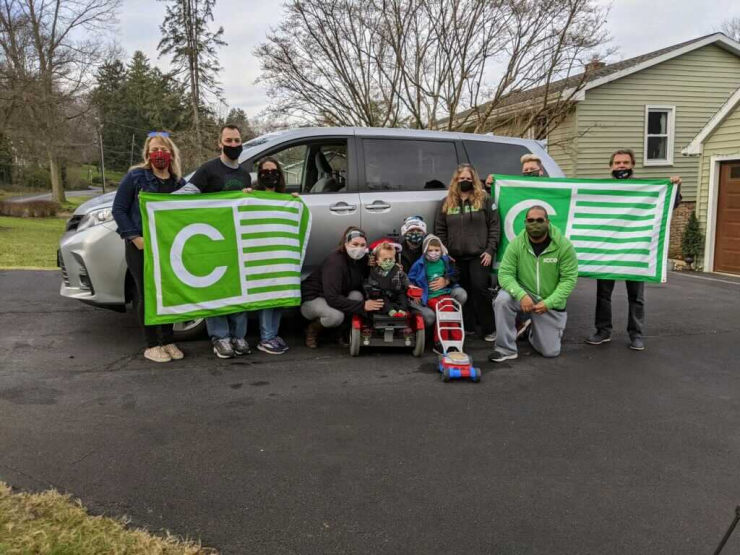 The fact is, Chive Charities exists to create life-changing opportunities for those who’ve been knocked down a time or two, yet continue to amaze and inspire. If the past eight years have taught us anything, it’s that life is fragile.

We could all use some more people in our corner. We could all use someone willing to help. Will that person be you? Whether it’s Bronze ($10/month) all the way up to Platinum ($200/month), every bit makes a difference. Become a monthly member of our donor family HERE.