We’re deep into the flight to Hawaii. Many of the passengers doze as the 767 chases the sunset speeding west.

A curious young child, probably 6 years old, ambles down the aisle. He stops at an old man nodding off under his reading light. The man is wearing a white cap that reads Pearl Harbor Survivor ’41. The child reaches out and touches his wrist,

“My dad says you fought in a war?”

The man perks up and puts his book down, “Is that so? Well I suppose your dad is right.”

“We’re going to visit my dad’s sister in Oahu (he pronounces it Oh-Ha-Hoo). Do you live in Hawaii, Mr.?”

“Do you have family there?”

“My family is in California.”

“Do you have friends there?”

The man’s gaze turns up, he looks off to a place somewhere beyond the child, beyond the plane.

“Many. I have many friends there.”

The Captain announces we’ve begun our initial decent into Honolulu. 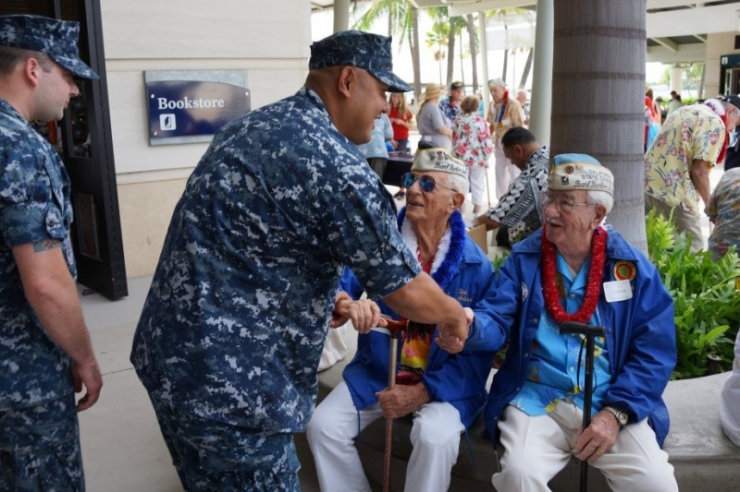 What grabbed me first about the Pearl Harbor survivors was how sharp the men were. The veterans had returned to Pearl Harbor with the enthusiasm of wide-eyed children on Christmas Day. They could recall the events of that fateful day with clarity, often down to the minute. Even after a rigorous day of activities, the veterans would gather at the hotel bar and drink beers at night. 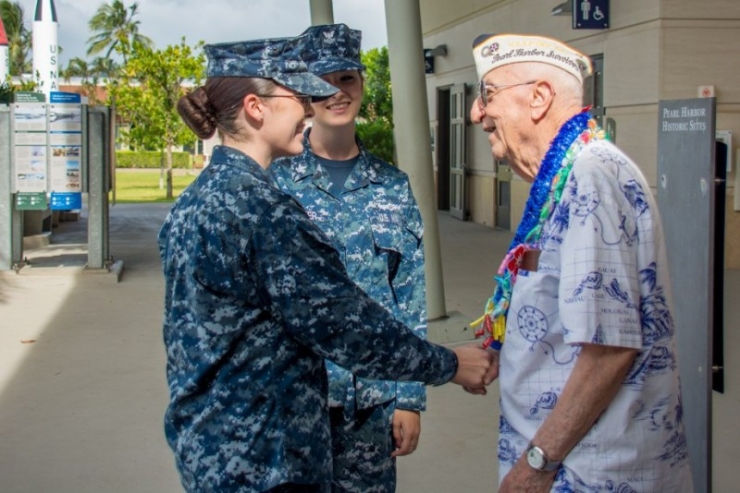 It wasn’t long until many of the visitors at the USS Arizona Memorial began approaching the veterans to say thank you. 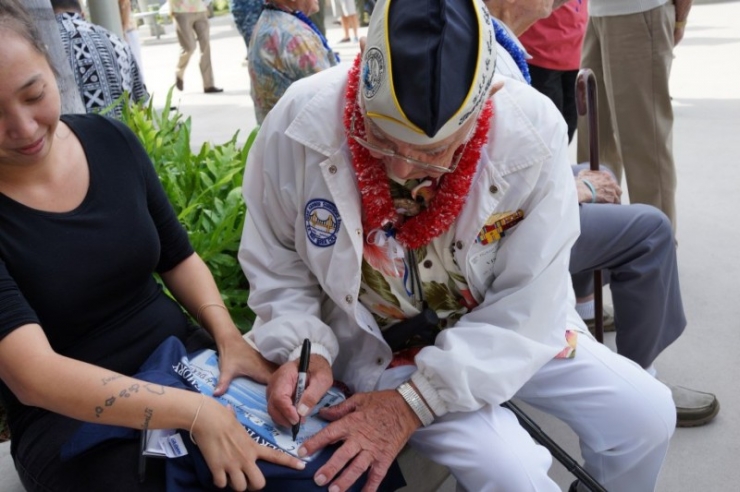 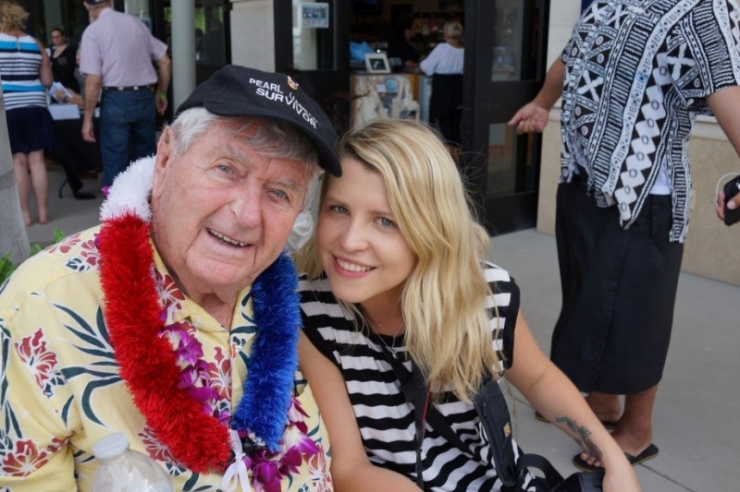 Robert Blum was stationed at Hickam Field during the attack. For years, many veterans including Robert wouldn’t breath a word about the war. I was initially hesitant to ask about their experience on December 7th, but I found most of the veterans were more than willing to share their stories now.

Robert told me that a Japanese bomb had exploded so close to him the day of the attack that the concussive blast shattered his eardrums. He eventually regained his hearing and became an Air Force Sergeant. Earlier this year Robert was awarded the Purple Heart for his bravery that day. I asked Bob how long it had taken for him to begin to share his story,

“I was reluctant to talk for many years.
But I found that talking about it brought closure. I had a recurring nightmare. I was in a small midwestern town, there was a warm summer breeze, elm trees lined the streets. Then, suddenly, oversized Japanese planes came bearing down on the town…

When I started talking to people about my experience the nightmares went away. (Bob smiles) Now the only nightmare I have is that I got remarried.” 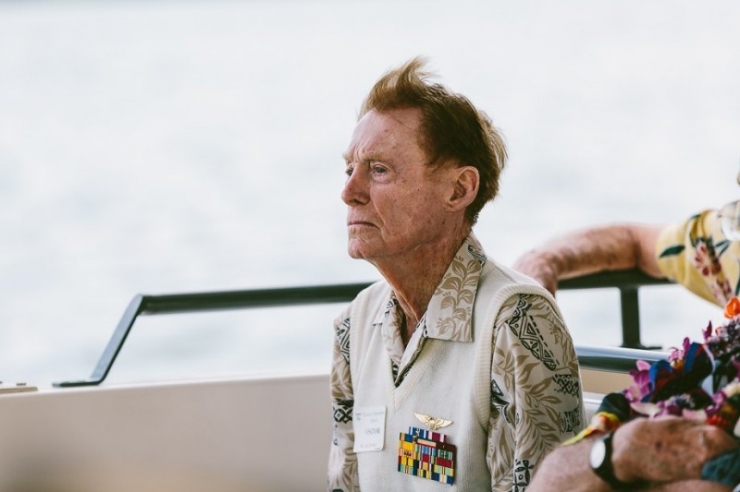 One of the first veterans I met was Jack Holder. His wife was diagnosed with Alzheimer’s six years ago and no longer recognizes him. He has outlived nearly everybody he knows. I was curious about Jack. He smiled often and his long red hair made him look much younger than his 92 years. I didn’t know it when I met him, but Jack was one of the most decorated airmen of the war.

He flew 34 missions over Guadalcanal in the Pacific. His sense of duty compelled him to fly 56 successful missions over Europe in B24 long range bombers. Many times he would return from those perilous missions with ‘a few holes in the plane.’ Jack never lost a single crew member. 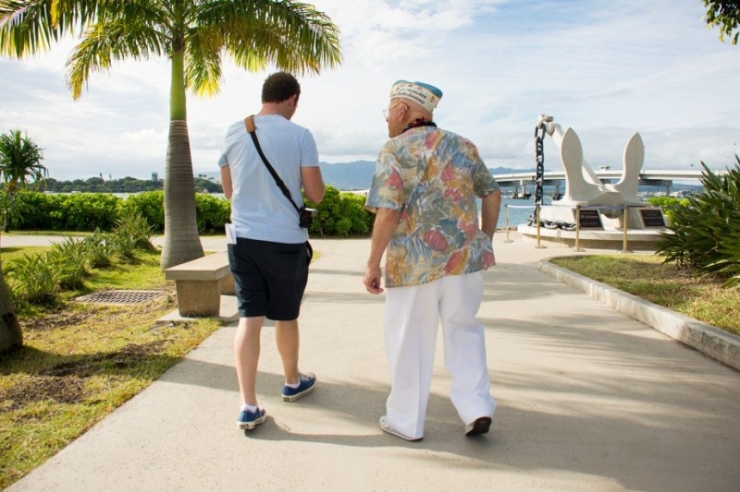 I was approached my Michael ‘Mickey’ Ganitch. Mickey was on the USS Pennsylvania that morning:

“Come take a walk with me to the harbor, son. I want to tell you about the morning of December 7th, 1941. I was on board the Pennsylvania getting ready to play the USS Arizona in football. It was the championship game, I was in full pads…” 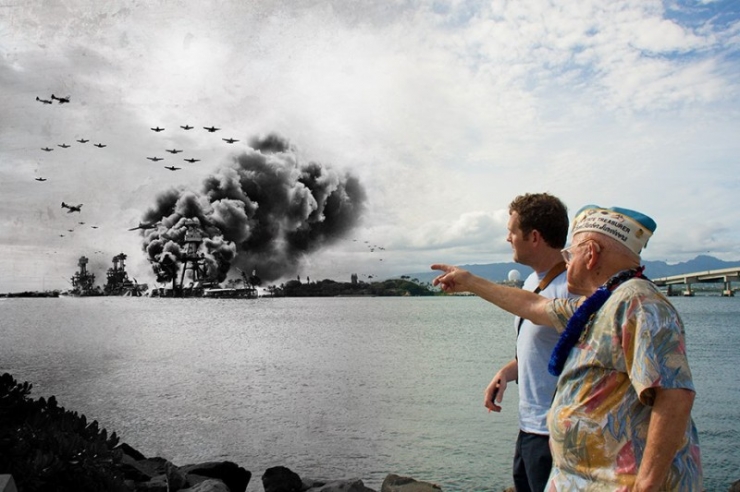 Mickey explained there were two attacks on the Pearl Harbor, the first and second wave assailed us from two different directions. The Japanese achieved complete surprise. The first wave hit the airfields first and continued to find seven U.S. Battleships moored along ‘Battleship Row.’

“They hit the USS Arizona right there, there’s not a one of us alive today that doesn’t remember the sound of the ship exploding. I knew what that sound meant, it meant my friends were dying.” 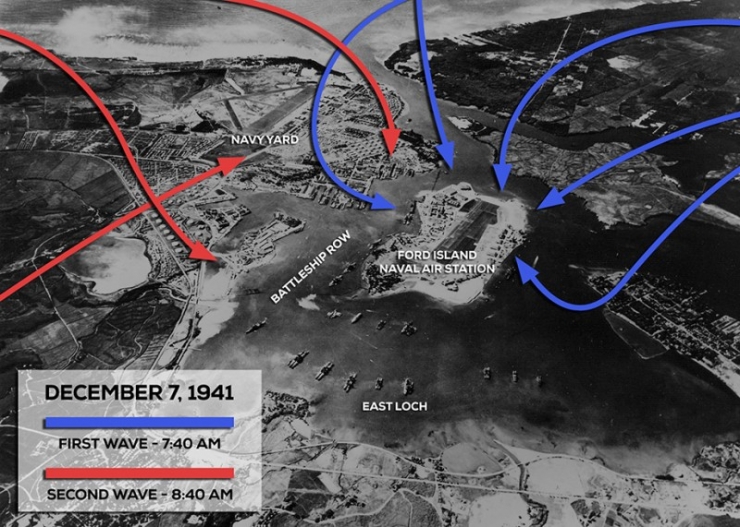 “ …The second wave further destroyed the Navy Yard and then they came after my ship, the USS Pennsylvania, which was in dry dock.

I got up to the deck and looked up. I watched a 500 lb. rip through our hull 30 feet from me. It was an armor piercing bomb and exploded 2 decks down. If it had exploded on contact, I wouldn’t be here today.

I was a radio man and I had one job: Get my butt up to the crow’s nest and relay coordinates of the enemy planes. I climbed the 70 foot ladder while the Japanese opened machine gun fire on me. I could see the Rising Sun insignia on the side of their planes and smell the burning oil.

I got to the crow’s nest and looked down. The Japanese torpedo bombers had to fly very low to release their payload. I was literally up higher than the Japanese planes as they swarmed like bees beneath me.

It occurred to me at that moment that I was still in full football pads.” 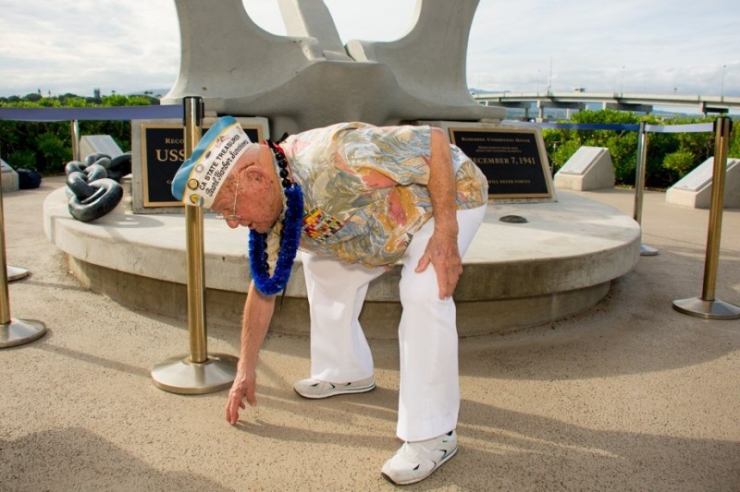 Mickey’s energy was contagious. He even struck a football pose for us.

Mickey also emphasized that the Japanese made a crucial error in judgement that day. Admiral Yamamoto did not order the third attack that would have hit the army base and the ship repair yard.

“Admiral Yamamoto left us a perfectly good base from which to fight the war and ship repair yard to fix our wounded battleships. All but three ships that were hit in Pearl Harbor that morning would be repaired in that shipyard and rise again to fight another day. If Yamamoto had ordered the 3rd attack we may well have lost the war. But he did not.”

It should be noted that all of the US aircraft carriers were on patrol out at sea and spared in the attack. 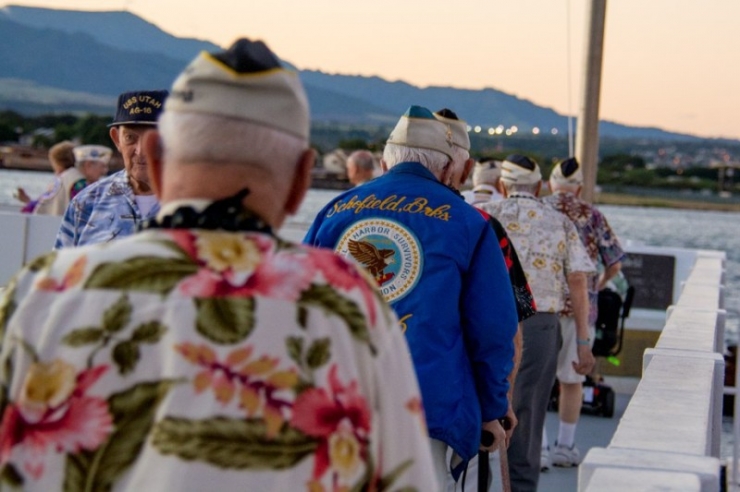 We arrive at the Sunset Ceremony... 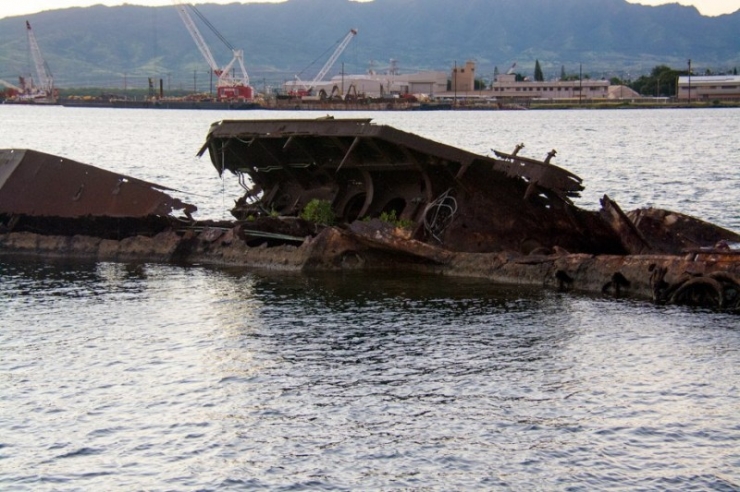 Part of the sunken vessel remains visible today where she rolled and settled on December 7th. 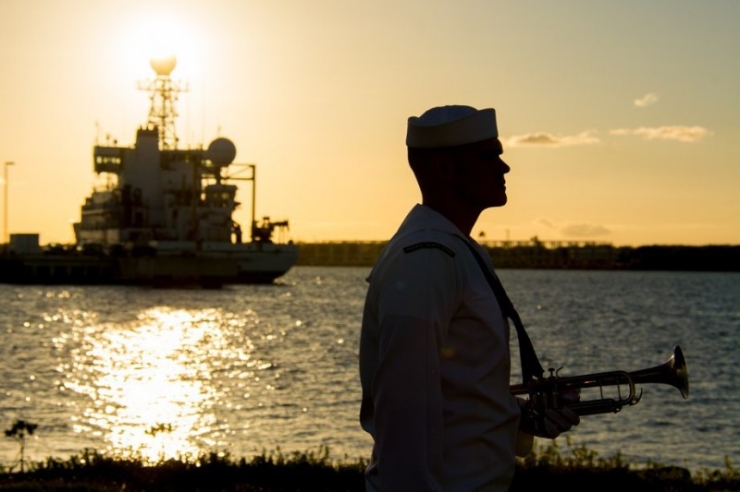 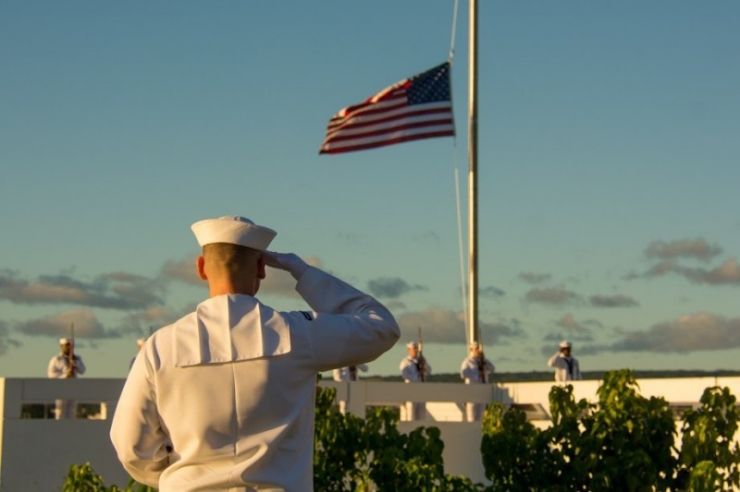 With the American Flag flying at half mast, Taps began to play. The U.S. Navy Seals assumed new roles as pallbearers, ushering Cecil’s ashes out to the rusted hull of the Utah. His ashes interred within the only resting place he ever wished, amongst his brothers. 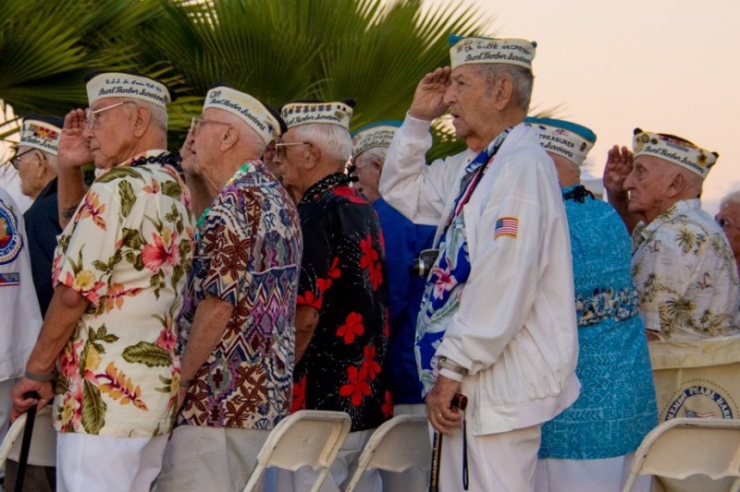 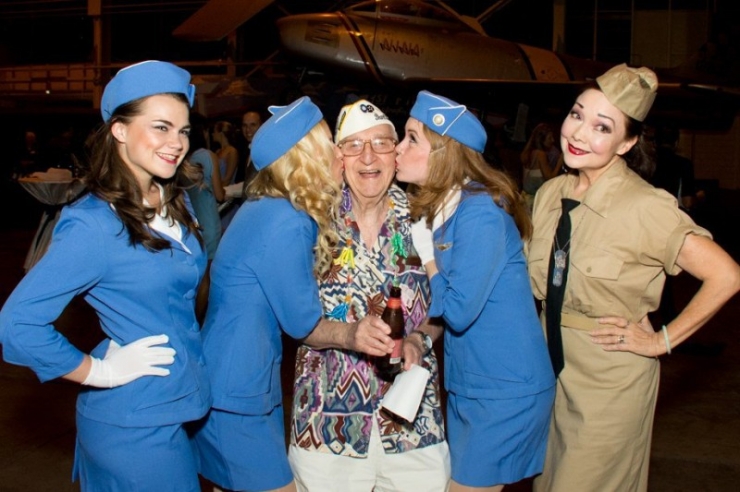 As we departed the Sunset Ceremony, some of the sailors asked if we might be willing to make a surprise appearance at the Pacific Aviation Museum’s annual fundraiser in a nearby hangar on Ford Island.

We were told there would be beer. The men said yes, definitely we should go. 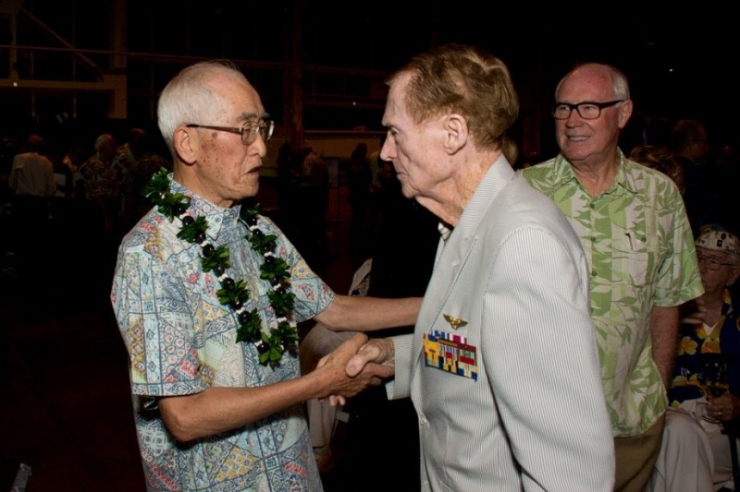 There is a saying amongst airmen that WWII Japanese pilots don’t exist. Many of them died and many more returned home never to speak of the war or their role in it.

It happened quickly. A man approached Jack and gently touched his shoulder, “Excuse me, I am Shiro Wakita. I was a Japanese biplane pilot.”

No man at the event would be more familiar (and take issue) with Japanese pilots than Jack. The crowd collectively turned their heads to watch Jack smile and offer his hand to Shiro. It was a magical moment as two once-sworn enemies embraced. 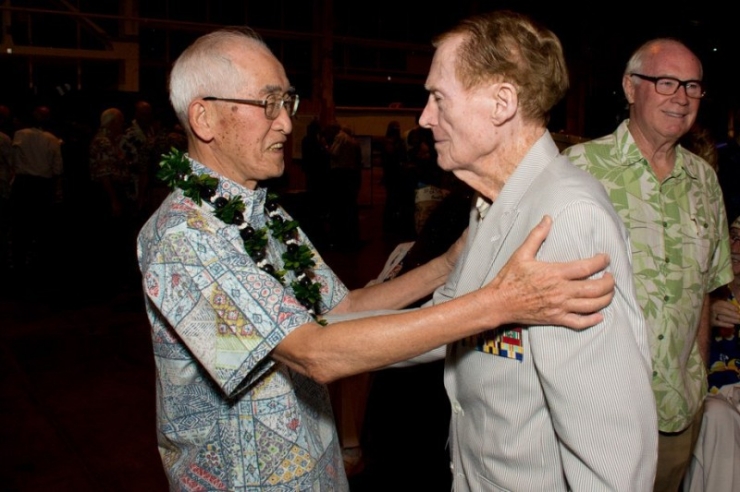 I asked Jack after the encounter if he’d ever met another Japanese pilot. “In my years on this planet since the war’s end, I have not met one… until this moment.” 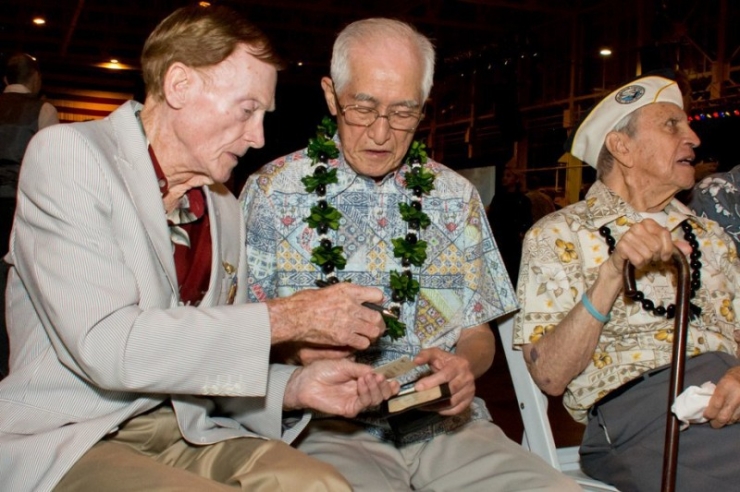 Jack and Shiro exchanged information and promised to keep in touch. Jack expressed interest in visiting Tokyo. It was an extraordinary moment. 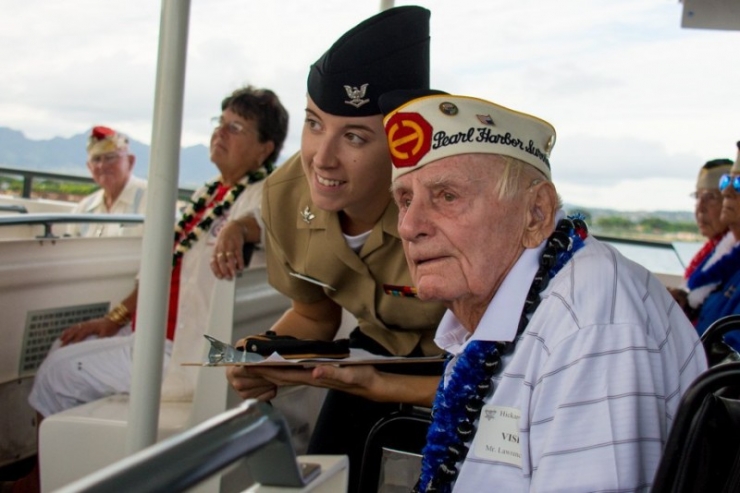 On our way to the Arizona, Edward Stone pointed out the USS Missouri, the mighty ship upon which Gen. Douglas MacArthur accepted the formal surrender of the Japanese on September 2, 1945. 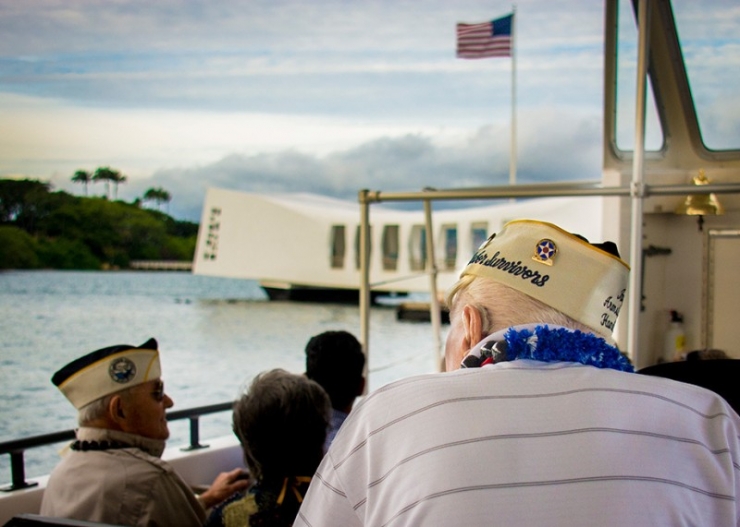 Pearl Harbor survivor Larry Parry (Fort Armstrong) makes his return to the USS Arizona for the first time in 73 years. 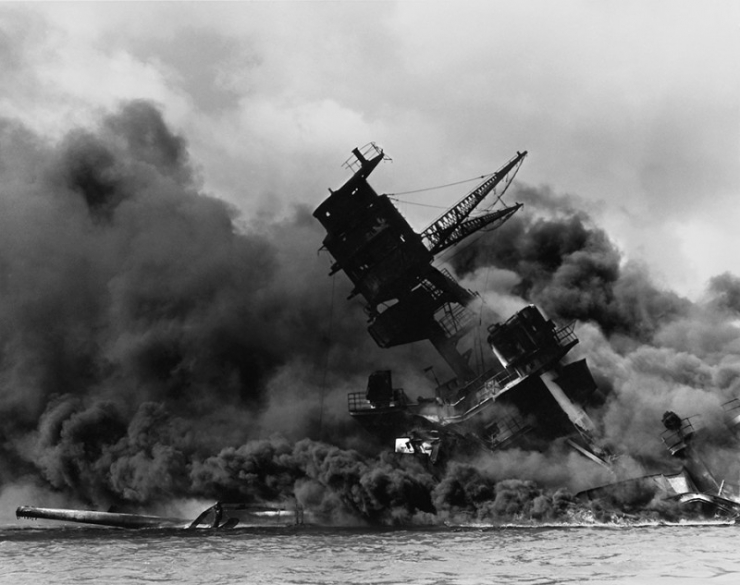 Just before 8am an armor piercing bomb went through the deck of the USS Arizona and ignited her forward ammunition magazine. Thousands of tons of ammunition exploded. 1,177 men died in those moments. For many of those men, the ship on which they served is now their tomb. 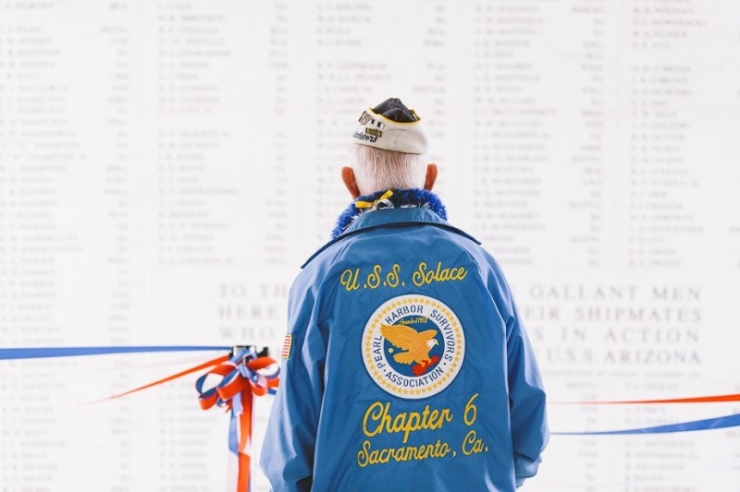 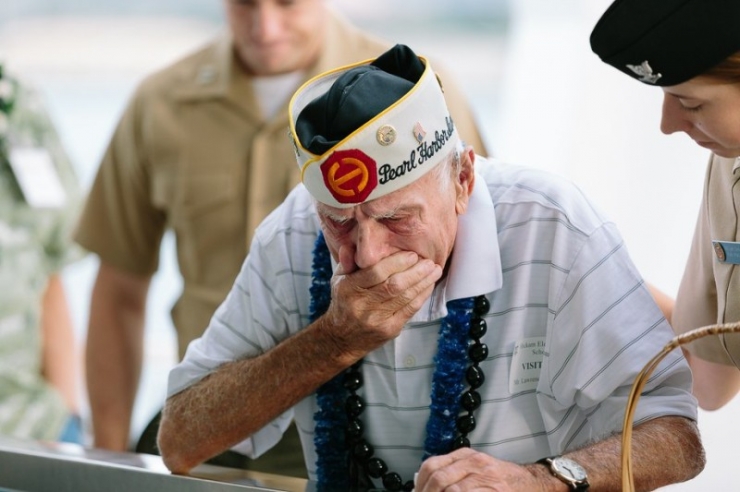 In a moment of reflection, with rose petals in hand and the recent loss of his wife weighing heavy in his heart, Larry was overcome with vivid memories of December 7, 1941 as though it were yesterday. With a salute and a prayer, the petals were swept away by the wind, leaving all in witness sobbing as a united unit. 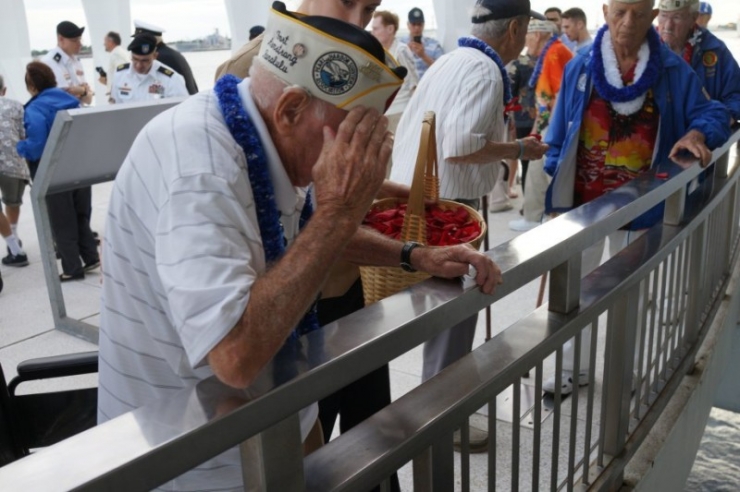 He salutes one last time. 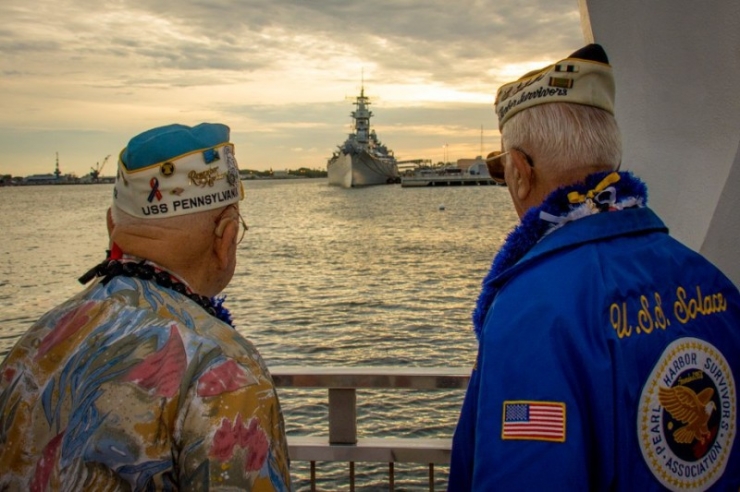 The Greatest Generation watched as a gentle current carried the rose petals out into the harbor at dusk. The men noticed the petal’s path led directly toward the USS Missouri, where the Japanese laid down their final surrender. There was an event on the Missouri that evening. Attendees noted rose petals surrounding the bow of the mighty ship.

We departed the USS Arizona under a golden sunset. I looked around at these men. The survivors had gone on to live lives worthy of the sacrifice their friends had laid solemnly upon the alter of freedom that day.

They remained faithful to their friends, their families, and their country. They set the example for what this great country would become.

They are the Greatest Generation. 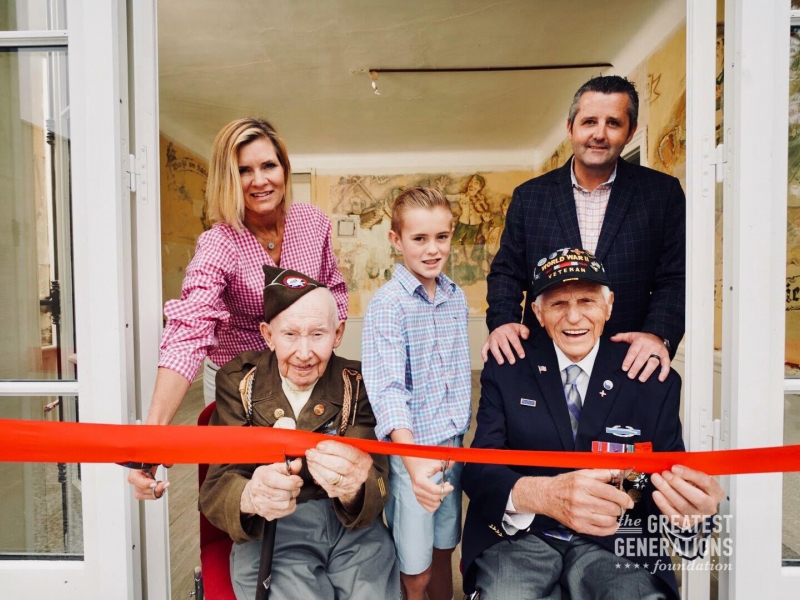 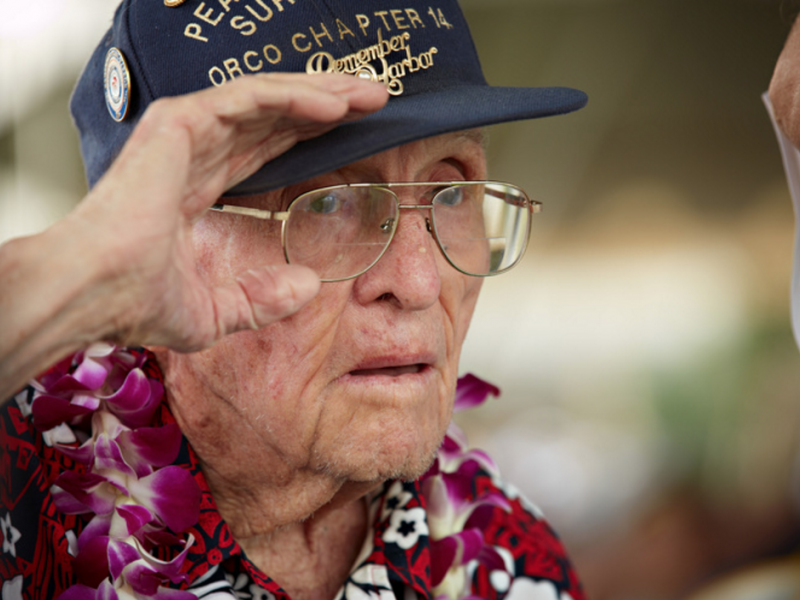 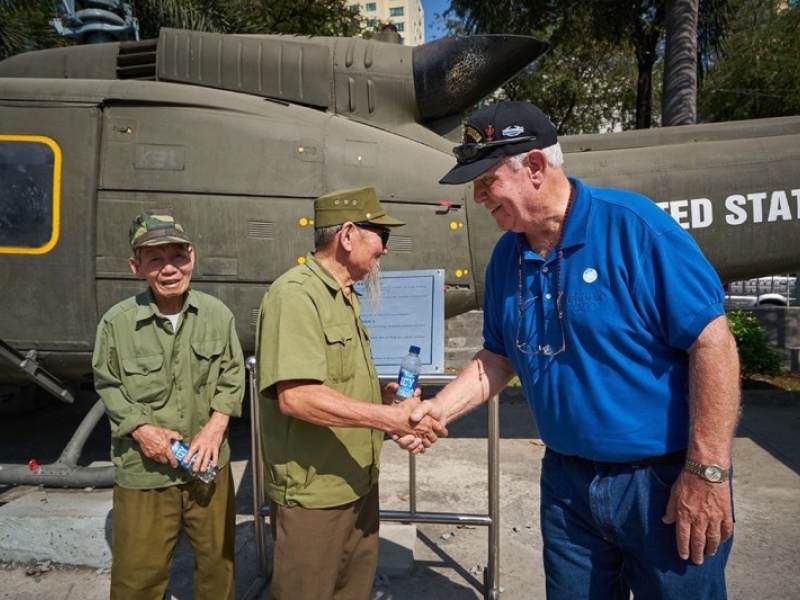