Hope and healing for his family

It can be hard to connect with family.

Do you guys remember this floating around a few years ago? Does it look like your holidays, too? We have a rule about no phones at dinner, but I’m not gonna lie, after we stuff our faces with pumpkin pie, all bets are off. 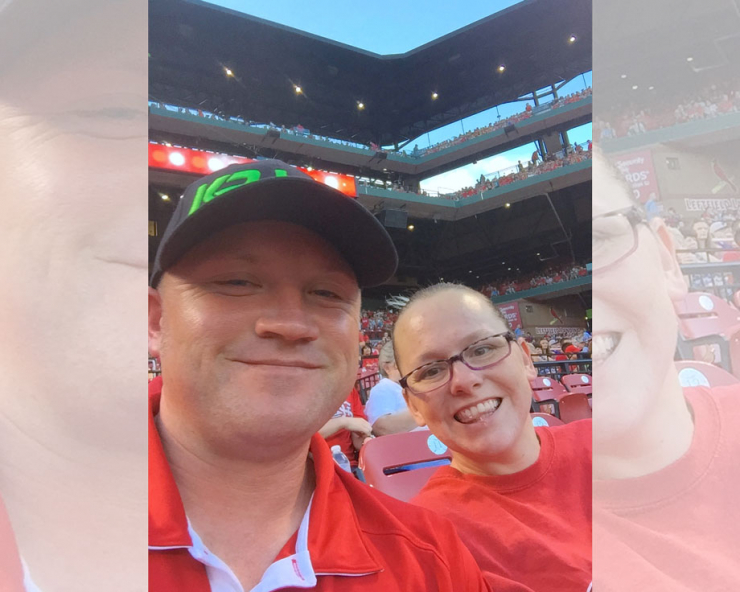 This is Ryan and his wife Jessica… 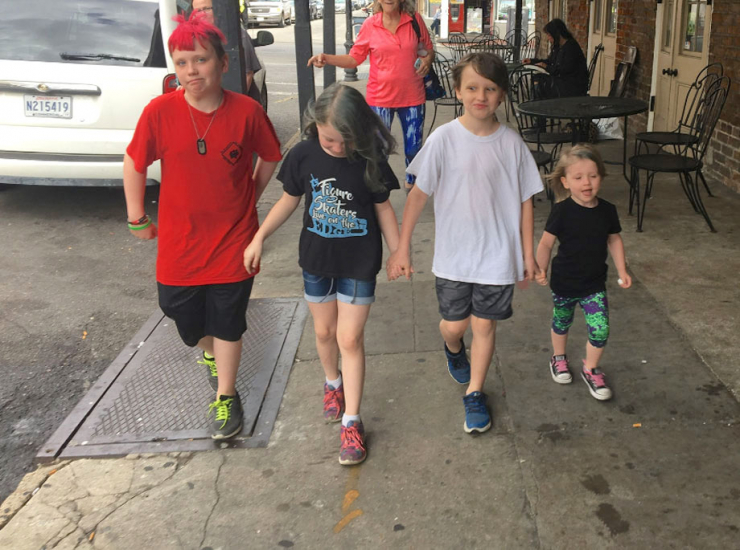 And these are their four kids. Notice how they’re out and about and NOT looking at their devices. Amazing! Ryan admits his family is just as addicted to screens as everyone else, but he tries exceptionally hard to unplug and connect with his kids face to face. 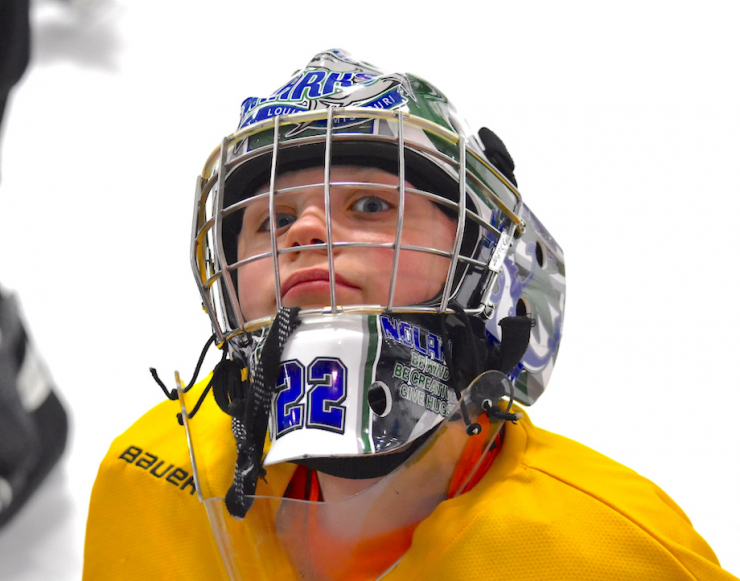 His oldest son Keegan is 12, and he looooves hockey – he’s a goalie. Ryan said he didn’t know anything about hockey until Keegan’s first season, but when he realized how much time they’d be spending together at the rink, he picked it up quick. He even started coaching Keegan’s team AND joined a hockey league for grown-ups. He was all in. 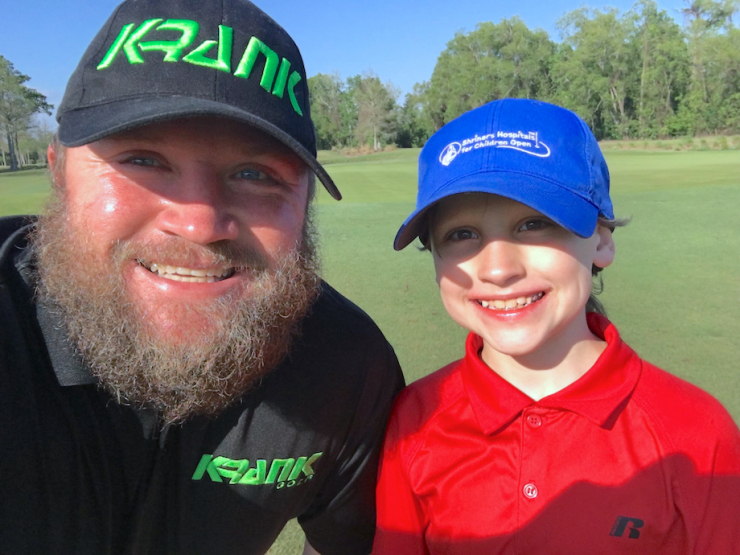 Here’s Ryan and his younger son Kaine. Kaine is 10, and his passion is golf. Ryan didn’t know much about golf either – he’d played some, and knew more about it than hockey, but when he noticed the spark every time Kaine hit the links, he jumped in with both feet. 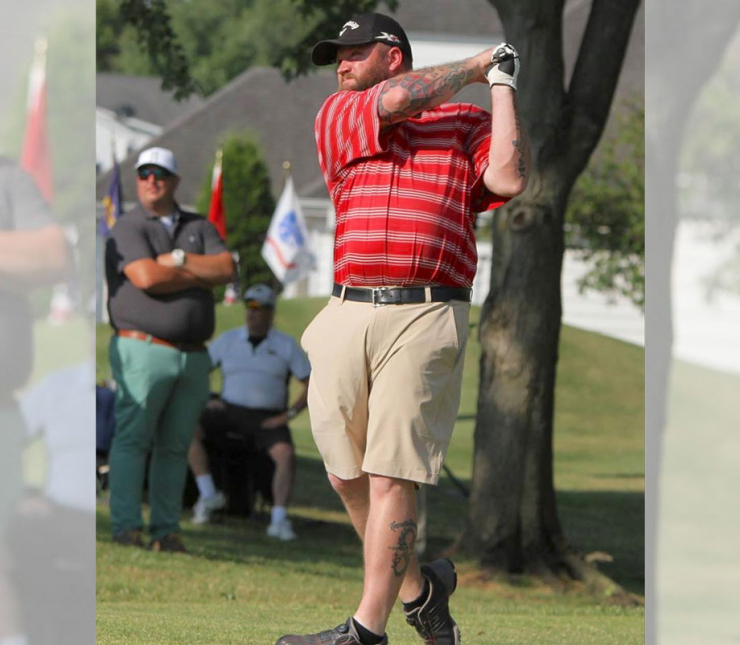 Two years ago, Ryan joined the PGA Hope program through the VA, which not only helped him improve his golf game, but connected him with veteran golfers of all abilities and skill levels, and provided the camaraderie veterans rarely find outside the military. He really, truly loved the program. 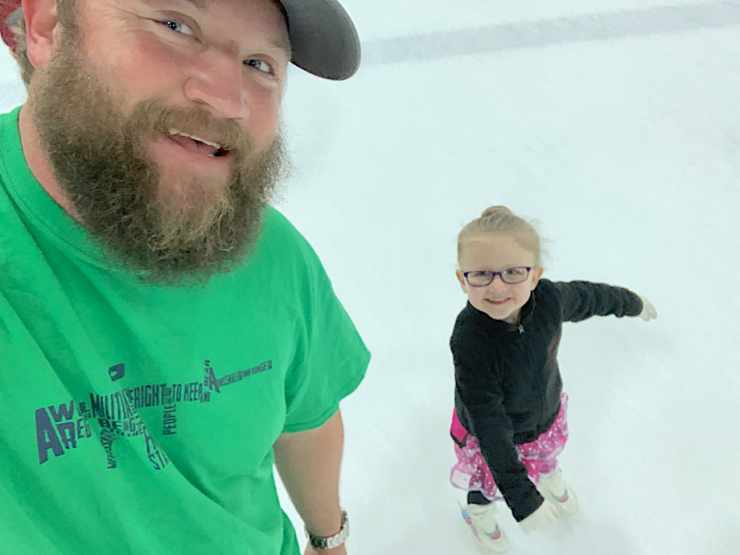 Ryan’s daughters, Kenzie (7) and Karli (4), like golfing in the backyard, too, but Ryan says their heart is on the ice. They’re both really into figure skating, and while he hasn’t perfected his toe loop or triple salchow, he wants to be present for them, cheering them on and being their Number One fan. And he was, for a while. 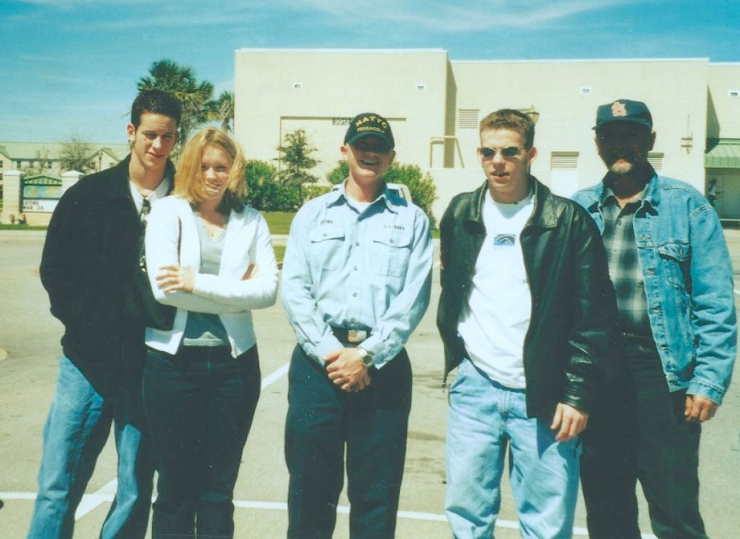 Ryan joined the Navy in September of 2001. Yeah, that September. 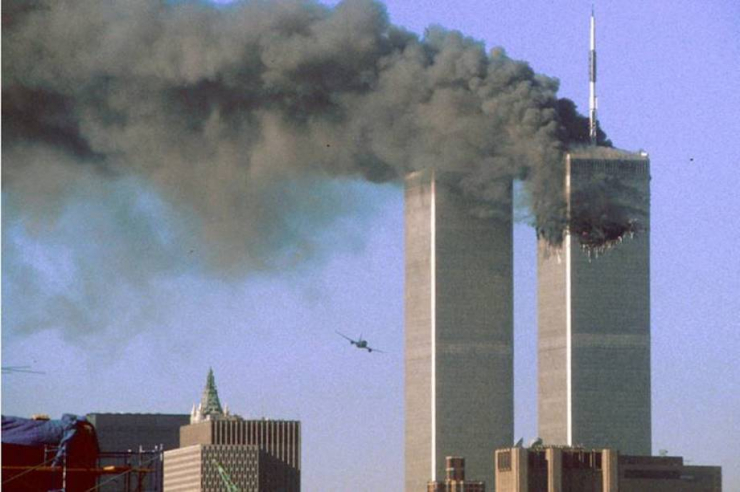 “I happened to be in dental, getting treated for dry socket, when the second tower was struck on 9/11,” he remembers. “That is a day I will never forget.”

Soon after, Ryan trained to become an Aviation Electrician’s Mate, and started working on the P3-c Orion. I checked the Google, and noticed the P3-c Orion was a pretty big plane. 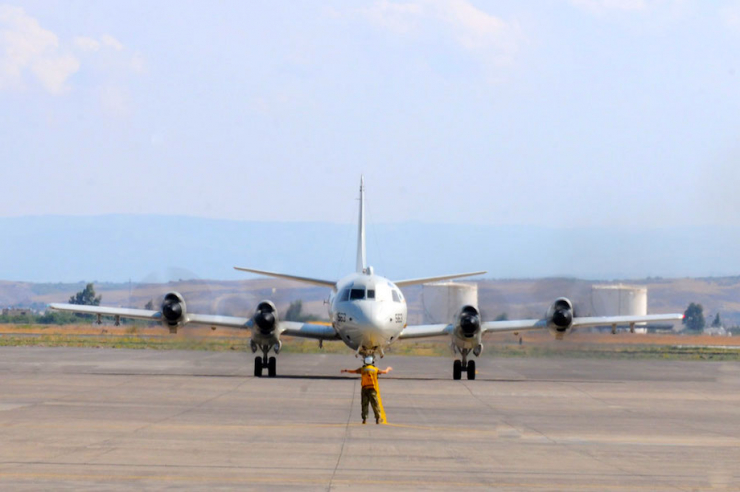 Ryan hadn’t been in the Navy for very long – about a year – when he was working on one of these and fell 12 feet to the ground. He landed on his feet and managed to keep his equipment from crashing to the ground, but the toll it took on Ryan was immense. Later that night, as he was putting his tools away, Ryan’s back gave out and he was rushed to medical. He had several herniated discs, and it was only the beginning of his excruciating, years-long journey with back pain.

He had major back surgery in 2006 when he was just 23, another in 2008, and while he experienced some improvement, he was never without pain. Then, in 2009, Ryan suffered another fall at work, and underwent yet another major surgery a few months later. It provided some relief from the pain, but not nearly enough for Ryan to live a normal life.

“I live with constant pain in my lower back that radiates down my right leg,” he explained. “It affects all aspects of my life, and has led to me losing jobs for missing so much work for medical appointments and treatments.” 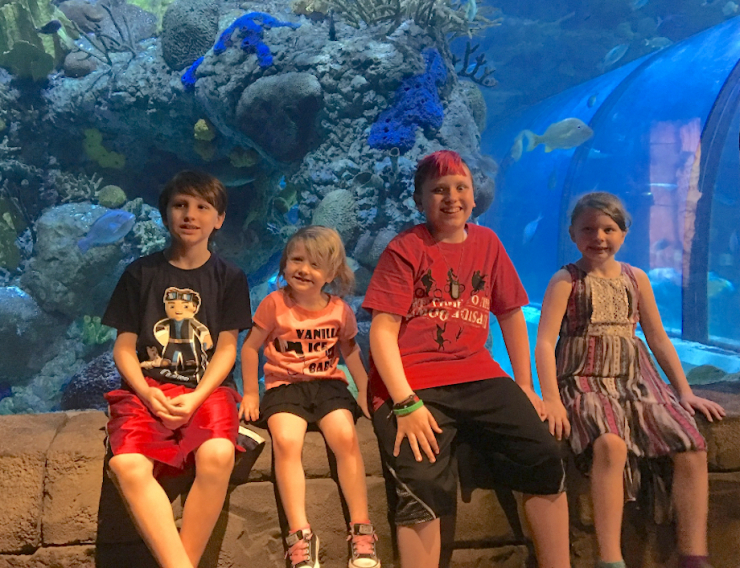 Not only is Ryan struggling to keep a steady job, he’s had to let go of things that mean the most to him, like being part of his kids’ sports and connecting with other veterans through the PGA Hope initiative. Even simple movements are just too painful, and Ryan’s home life is suffering. Moments like these, where his family is together and connected, are becoming impossible. 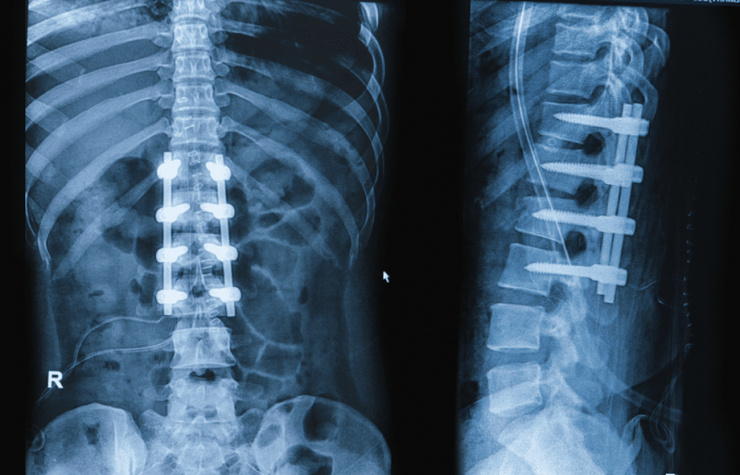 His doctor at the VA offered to perform a spinal fusion as a last resort, but admitted it likely wouldn’t reduce Ryan’s pain and could even cause more complications. Determined to find a solution that would give him his life back, Ryan started researching alternative treatment options, and learned about stem cell therapy and platelet rich plasma injections (PRP) at the Ozzie Smith IMAC Regeneration Center.

This form of regenerative medicine introduces highly-concentrated cells known for their healing abilities to a patient’s damaged tissue, improving function and reducing pain. With nothing left to lose, Ryan started treatment a few months ago and saw results almost immediately. He’s got a little way to go, but he’s feeling so much better he’s already talking about all the things he wants to do when he’s able. 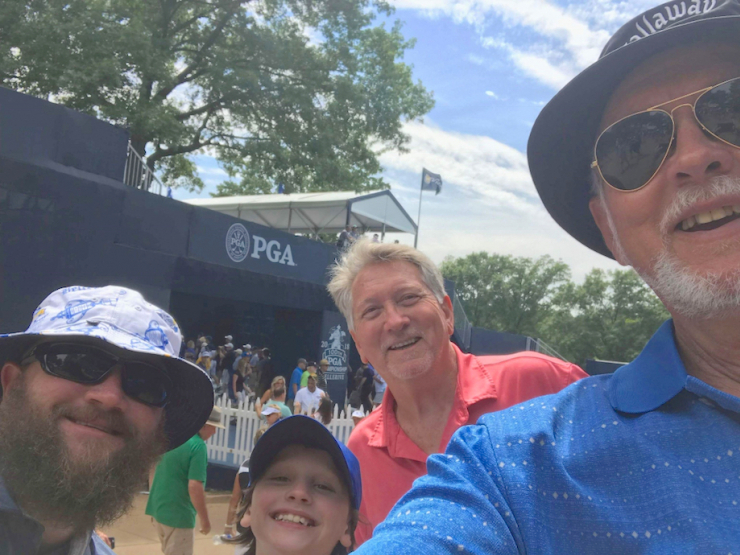 Unfortunately, there’s no billable code in the VA medical system for these procedures, so Ryan was forced to either pay the $7,000 bill out of pocket, or live with the pain. Chive Charities believes good quality of life is something everyone deserves, so when Ryan reached out for help making his life worth living, we didn’t hesitate for a moment to say yes. 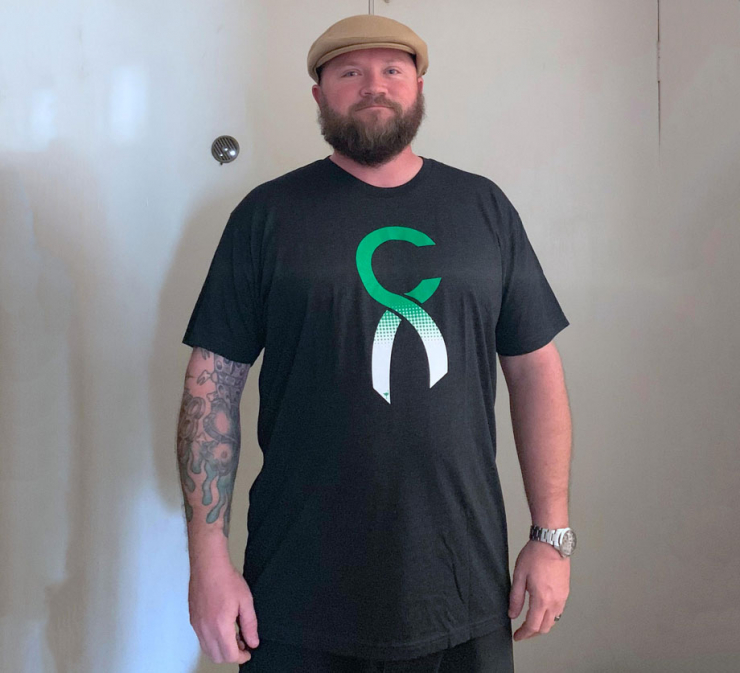 “This grant will allow me to keep a job, it will mean food and shelter for my family. It will give me the ability to spend the quality time with my family that has been missing. It will show my kids there are people out there willing to help out their fellow men and women when they need help, and that is something we will never forget.” 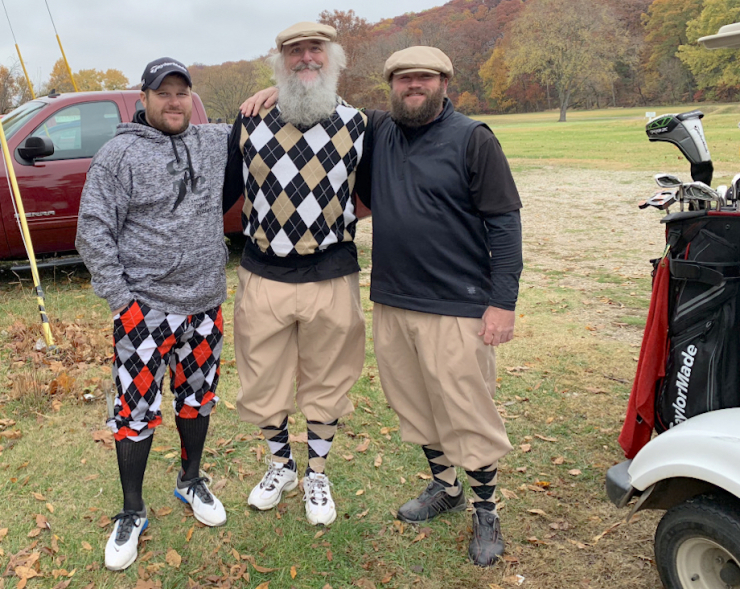 When Ryan was talking about his kids and sports, he mentioned how hard they work, how he tries not to push them too hard, but instead help them focus, get better, and not quit when things get tough. It’s how he tries to live his life, too, and we’re honored to help him and other veterans focus on getting better no matter what they’re going through. Be part of the next story of resilience and recovery by becoming a Chive Charities monthly donor RIGHT HERE. 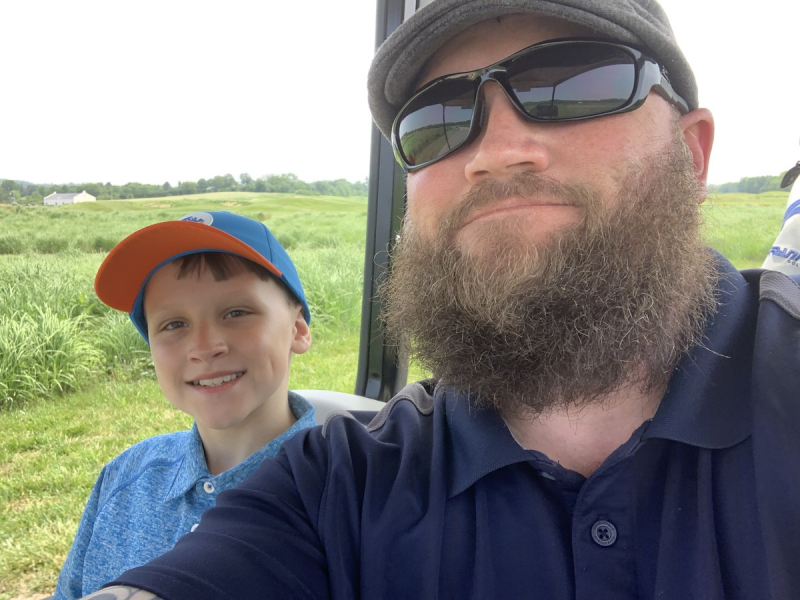