Identical twins, one with a rare condition - one inseparable bond

Identical twins, one with a rare condition - one inseparable bond

I grew up with identical twins. My cousins Anna Beth and Lauren. For years I couldn’t tell them apart. To help, my Aunt Theresa would paint Anna Beth’s nails pink and Lauren’s nails lavender to help others tell the twins apart. On April Fool’s day she’d reverse the twins’ nail colors for a laugh.

Anna Beth and Lauren had their own personalities, but when they wanted, they could be a single unit. It was like a magic trick. They could tap into a shared consciousness that I could never understand, only observe, an unexplainable bond that only exists somewhere in the mystic.

Lucy and Bonnie-Ray Hott were born 10 minutes apart and two months early on Christmas Eve, 2008. As if life in the NICU isn’t hard enough, one of the identical twins, Lucy, had additional complications. Lucy was born with clubbed feet, her knees bowed inward like an hour glass. Her curved back showed signs of extreme congenital scoliosis. Her identical twin sister, Bonnie-Ray, is not affected at all. Beyond Lucy’s physical birth defects, something even more sinister lurked at the base of Lucy’s spine.

Lucy was diagnosed with a very rare congenital disorder called Sacral Agenesis. She is lacking some of the bones she is supposed to have in her spine and tailbone. Lucy was born without a sacrum. You know the sacrum as the bone that gives curvature to your butt. But the sacrum plays a crucial role in spinal cord development. Located at the inferior end of the spine, it forms the solid base of the spinal column where the spinal cord attaches itself. Without a sacrum, Lucy’s spine is left floating.

This causes a number of complications. Lucy suffers from a dysfunctional bladder and bowels because of her affected nervous system. She has no sensation in her lower back and buttocks. Lucy spends two hours of her day just going to the bathroom. I’ll spare you the details of this but it is an unpleasant experience. Lucy fatigues very easily which makes walking difficult; she spends a majority of her time in a wheelchair.

If her spine is pinched, she could be paralyzed at any time. But worst of all, when the spine rises and the cord doesn’t grow at the same rate – it will break. There is nothing anybody can do to prevent this.

When the spine rises.

Lucy is six years old now. Puberty is around the corner. As her body grows up, she will leave her spine behind, the event will likely paralyze her from the waist down. In some ways, Lucy is a ticking time bomb.

Now in first grade, Lucy wears leg braces and spends 100% of her time at school in a wheelchair. Most of the kids at school are kind to Lucy but there are bullies. She’s the only person at her school with physical deformities and kids can be so cruel sometimes. But Lucy doesn’t flinch. She stares them down, holds her ground, doesn’t cry or tremble… until she gets home. At home she collapses into her mother’s arms. It’s a daily ritual, and every day Lucy tells her mother the same thing, “I won’t let them see me cry.” For a 6 year-old girl who reads at college levels, Lucy is wise beyond her years. “Let them have their laugh”, she tells mom, “I’m stronger than they are.”

Lucy has a loving home. Her mother, Tasha-Kay is a grade school teacher and her father, Carl, is headed back to college to get his law degree. Tasha-Kay and Carl are also foster parents. They are currently fostering two adorable kids, 4 months and 18 months old. They hope to adopt. With Carl headed back to University, the family is solely reliant on Tasha-Kay’s teaching income. I know, there’s a joke in there somewhere.

The rental home the family occupies is not handicap accessible and, with Lucy’s condition worsening, the home is slowly closing in around Lucy. The narrow halls and cramped bathroom snag her wheelchair. When I ask Lucy what the worst part is she doesn’t hesitate, “The door to my bedroom is a no-fun door.”

Last week, Brian, Angie, and I boarded a plane to Albuquerque. We wanted to meet Lucy… 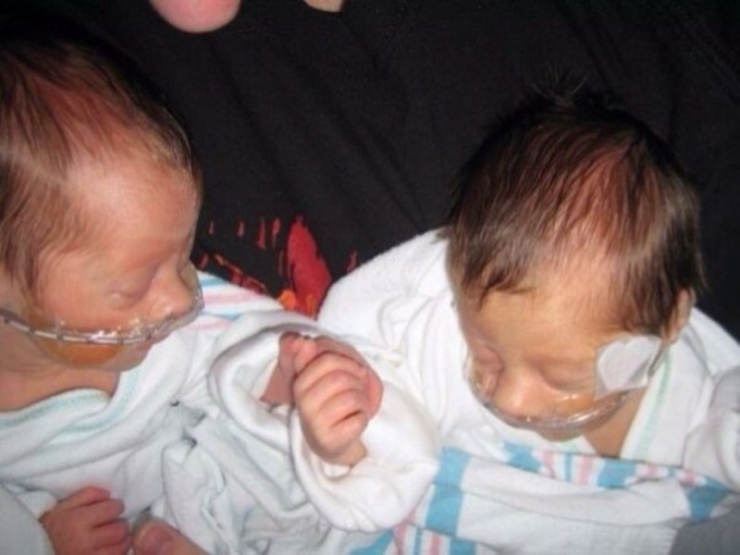 “In the NICU the twins would hold each other’s hands. They still hold hands all the time to this day.” 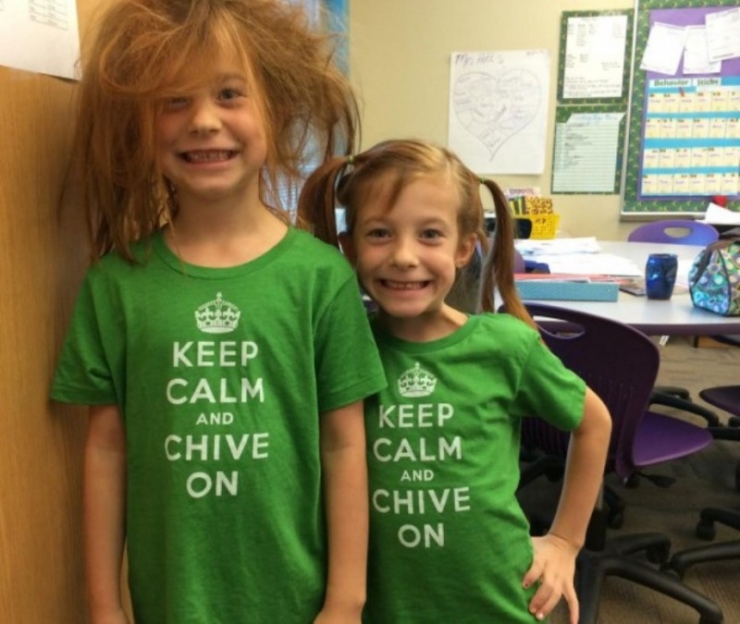 Bonnie-Ray is only 10 minutes younger than Lucy but she’s now 3 inches taller and 12 lbs. heavier.

Lucy’s mother told us, “To avoid a long explanation, sometimes I tell people that Bonnie is the older sister. People immediately assume she’s a couple years older. Telling people that they are actually identical twins and that Lucy is the older one causes a special kind of confusion for some people.” 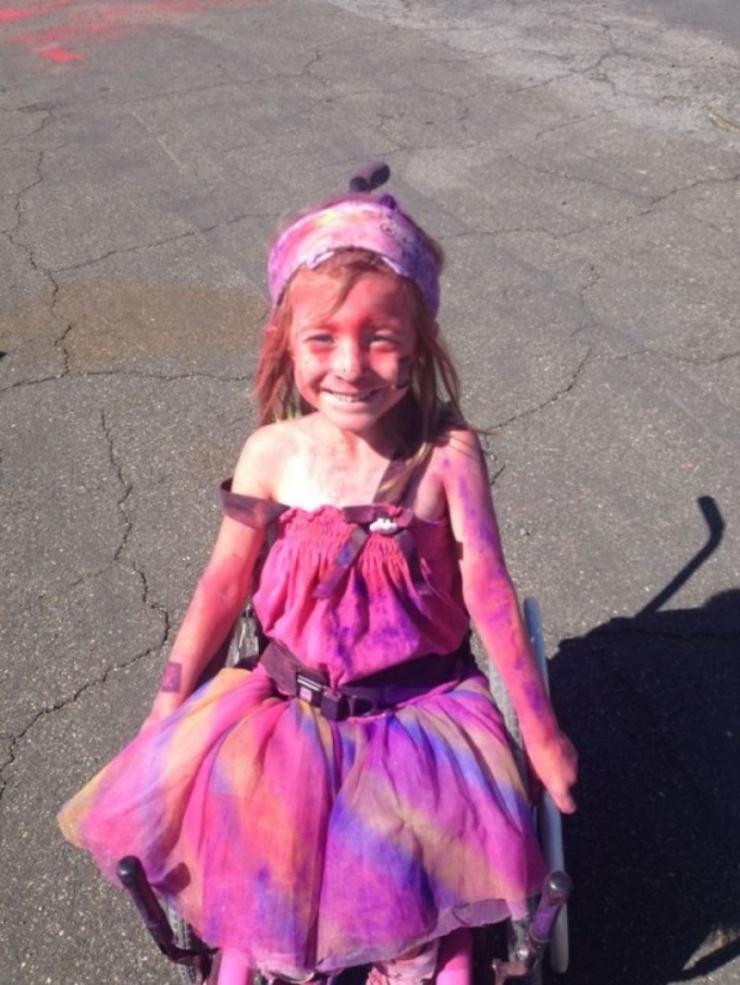 “When Lucy hears about a charity, she has to participate. Somebody at school told Lucy that their dad was in this thing called the Color Run for the Ronald McDonald House, she was in. Last year she cut her hair for Locks of Love.

She hears about people in need, anybody in need, and she is relentless until she can help in some way, even if she does the whole ‘run’ in a wheelchair.” 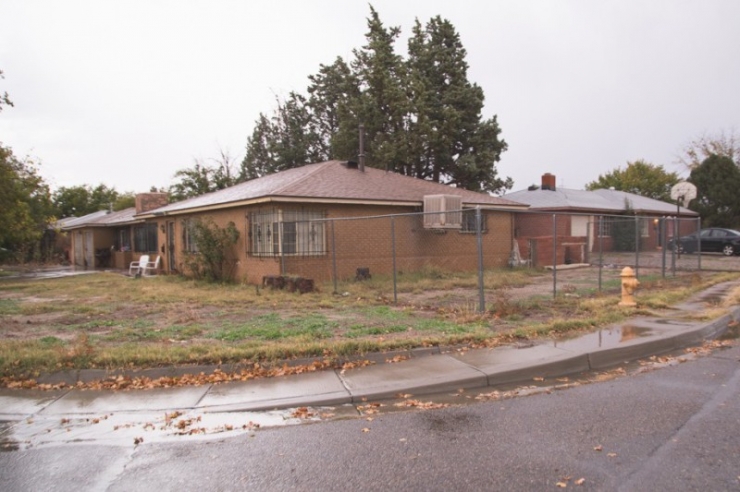 As we pulled into the small neighborhood, I couldn’t help but feel that I was supposed to be in this place. There was something here for me, a memory, and lessons learned from my twin cousins long ago.

Some of the homes in the neighborhood had clearly fallen into disrepair. 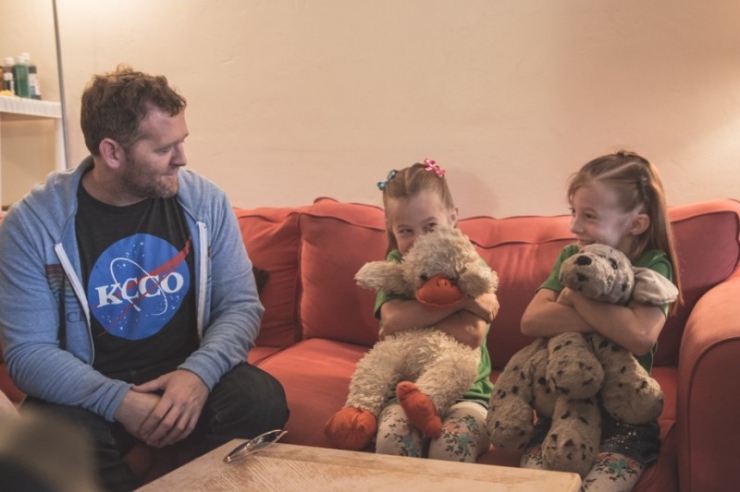 I was introduced to Duck and Dog. 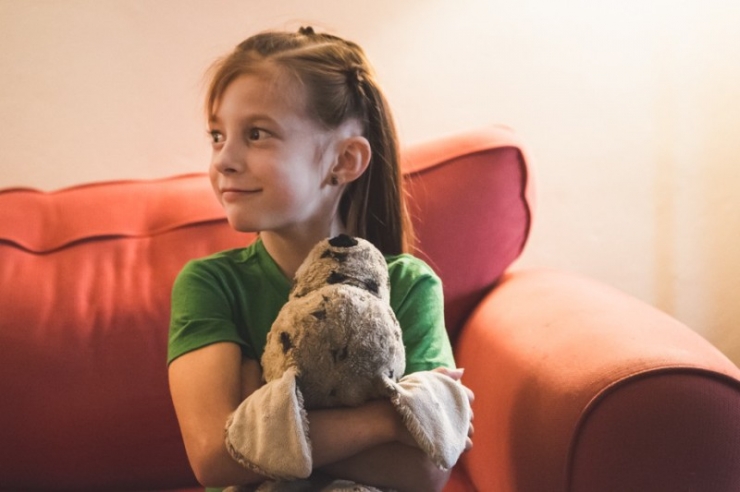 Lucy would tremendously benefit from a mobility dog, both to help her from tiring is quickly and also ease some of her social fears. She’s been asking for one for a year but these special dogs are expensive. Chive Charities has donated $10,000 for Lucy to get her mobility dog. This photo was taken the moment we told Lucy the good news.

I asked her what she would name her new dog? Lucy thought hard about it for a minute and finally said, “I’m going to name him Ollie.”

Lucy leaned over and whispered, “Because I know it was the Olympia Chivers who told you about me.”

Hearing such a thoughtful response from a 6 year-old nearly knocked me off the sofa. 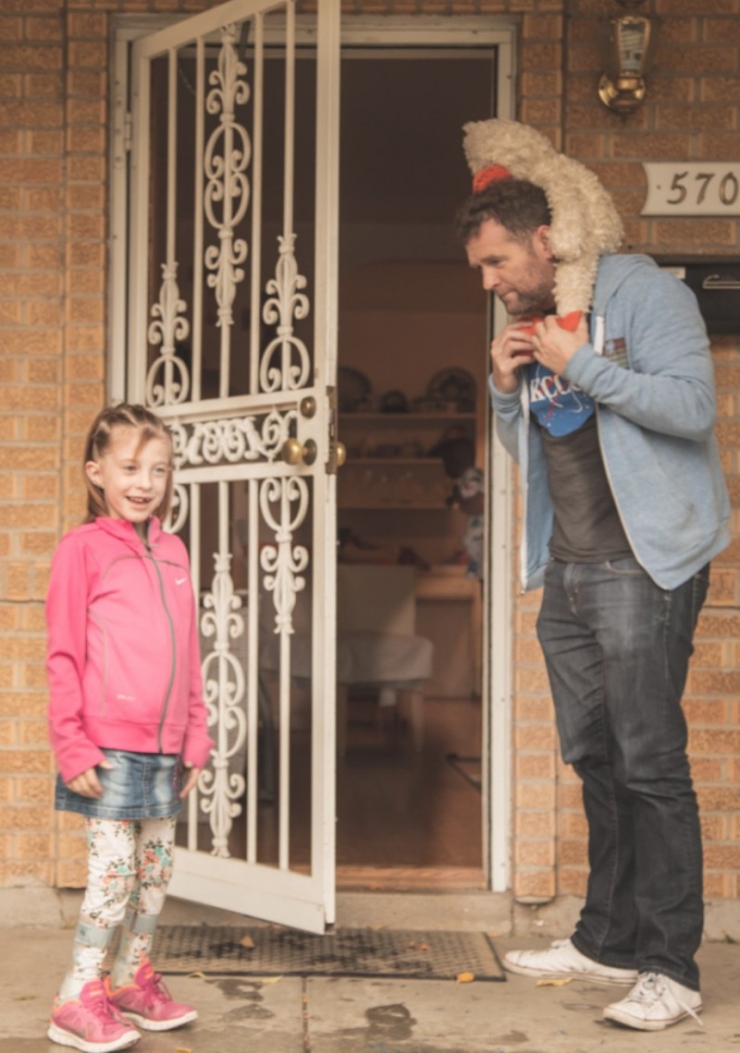 Lucy told me that Dog liked me now because I got her a real dog but Duck wasn’t gonna like me unless I gave him a piggy back ride. 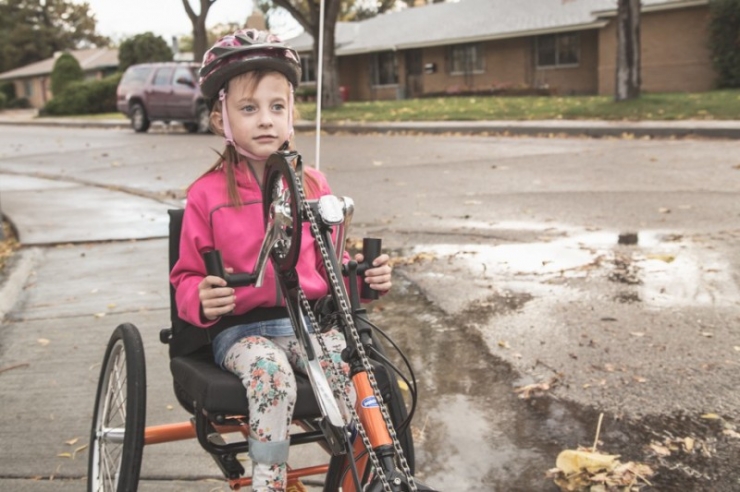 We had a few more surprises in store for Lucy. We surprised her with an adaptive tricycle! For Lucy, this gift had personal meaning. Cycling isn’t just a fun hobby it’s freedom; a way for her to spend quality time with her family. The Hott family have always loved cycling, her grandfather was a triathlete and mom Tasha­ Kay used to do biathlons. Up until now, they could never do it all together. 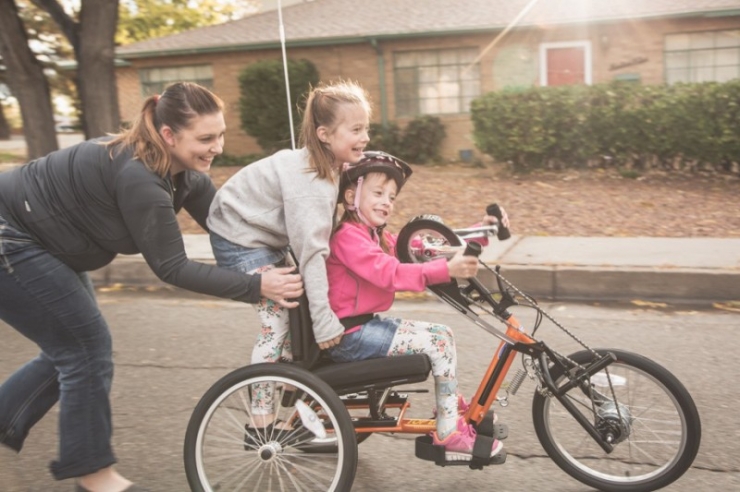 The twins with their mother, Tasha-Kay. 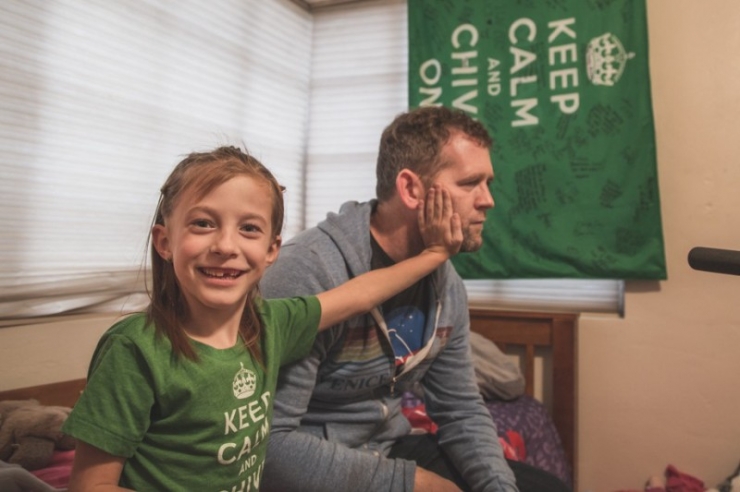 Lucy was totally warming up to me, I think. 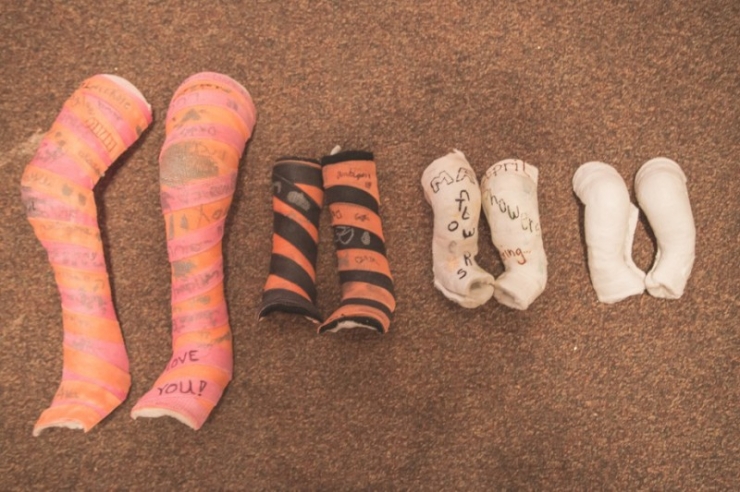 Lucy’s last series of surgeries included bilateral tendon lengthening, heel cord releases, and ligament transfers on both legs. Lucy even had both her achilles sliced at one time. One leg seems to have taken well to the procedures, however, the other has not and she may need to be redone. 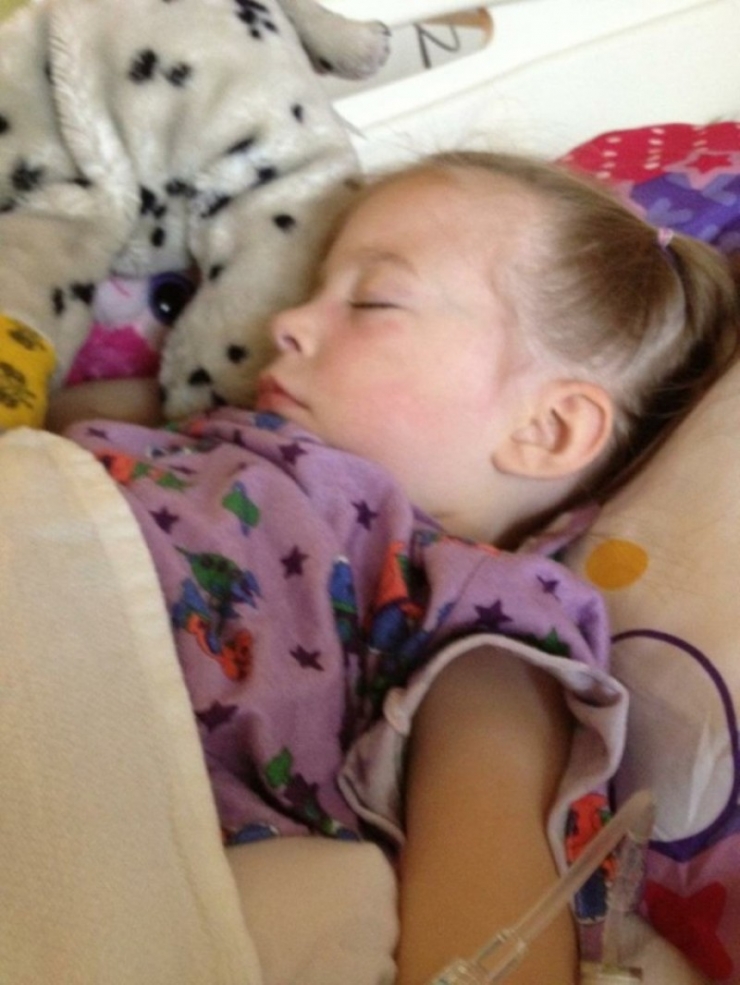 The surgeries have come at a price. They are extremely painful and carry no assurances that Lucy’s untethered spine will hold up its end of the bargain. 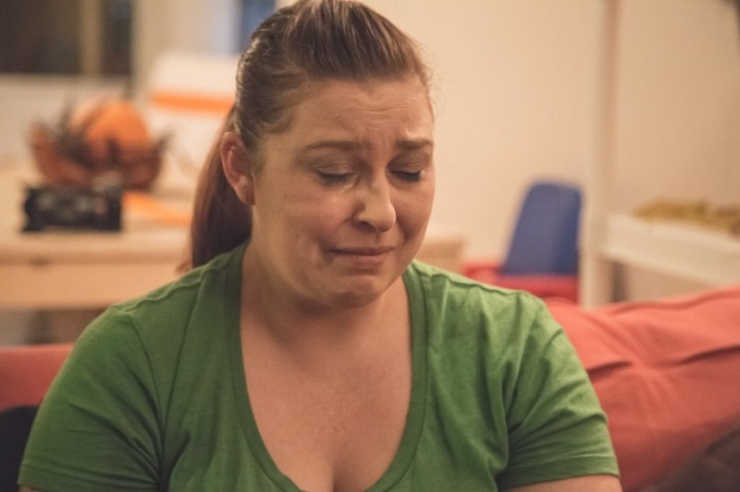 Lucy’s mother wouldn’t budge when I asked if they needed more help. “You gave her a dog and her bike, there are others that could use our help more. You’ve done enough.”

But I pressed because I do that and it gets me in trouble sometimes. I asked what they hoped life would look like ten years from now? Tasha-Kay suddenly broke down,

“Ten years?! I don’t know what tomorrow looks like. I know that I could wake up tomorrow and Lucy could be paralyzed. I know this, but I’m not prepared for it. We don’t have the money for such contingencies. But I also refuse to put her in a bubble. She has to live like all the other kids. Just because she’s in a chair she’s not capable, she’s not a burden. Her father and I joke that she’ll be taking care of us someday. But there’s a half-truth to it, you know? She’s that strong.” 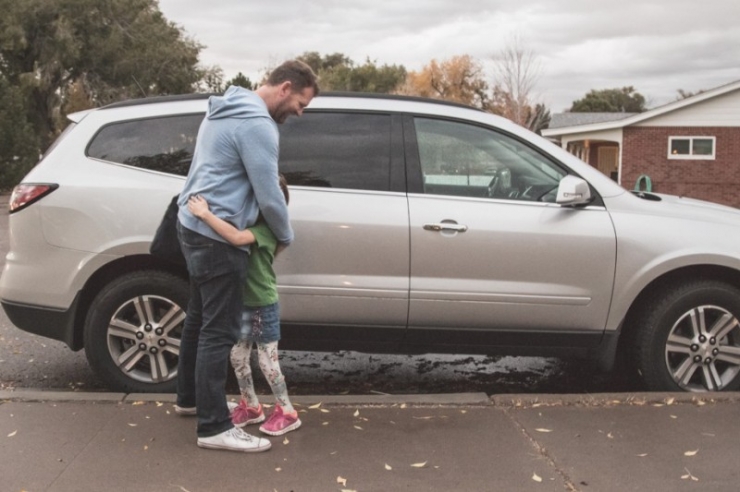 As I left, Lucy grabbed my hand and said, “Duck liked you.” Then Lucy whispered to me, "Thank you for my dog." 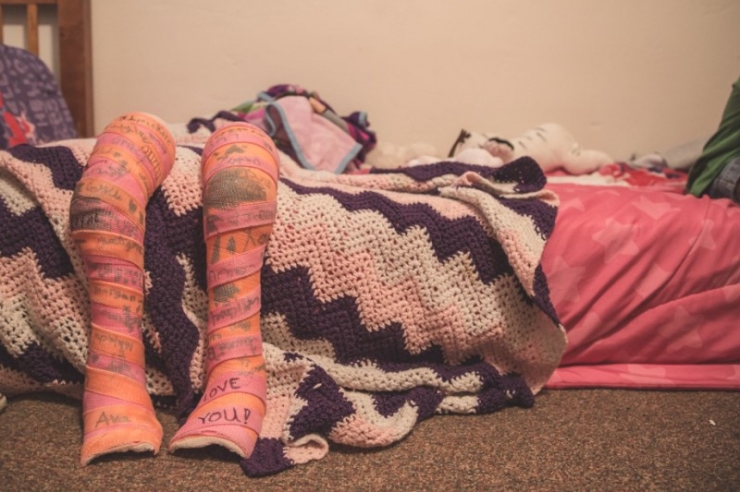 Only in identical twins will you find two souls so closely allied. Yet one will grow up, and the other will likely grow into a wheelchair. But that doesn’t make her weak. Lucy is the bravest 6 year-old I’ve ever met.

What you don’t know yet is that Lucy’s parents were told she would never walk, let alone run. But Lucy was determined. Each morning her twin sister helps Lucy out of bed, she massages her legs and holds her hand as they walk in tight circles around their bedroom to work out Lucy’s leg cramps. How often do most of us take for granted the moment our feet hit the floor in the morning? For most of us, life’s struggles are tempered until we leave our front door. For Lucy, the first step of her day is the hardest.

Lucky for Lucy, her sister is right there, every step of the way, holding her hand.

The Hott family’s lease is up soon and we want to raise $25,000 to pay next year’s rent on a spacious, handicap accessible home. Thanks to all our Chive Fund Members for Lucy’s adaptive tricycle and therapy dog. We all know the score here. Let’s do it.

Epilogue: I have really never met anybody like Lucy in my life. She’s the kind of girl who knocks you off your axis. A special thanks to Brian Mercedes, Angie Cone, Caitlin St. Pierre, and the Olympia Chivers who brought this little miracle to my doorstep. 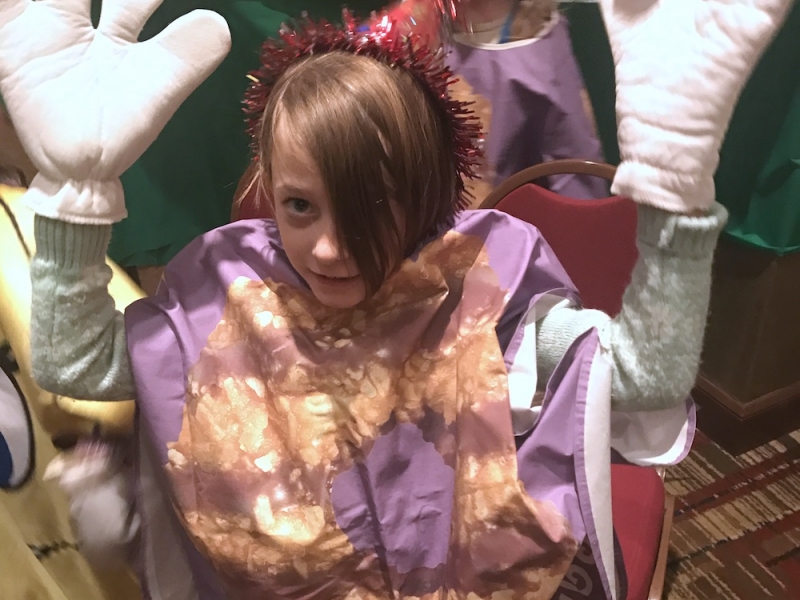 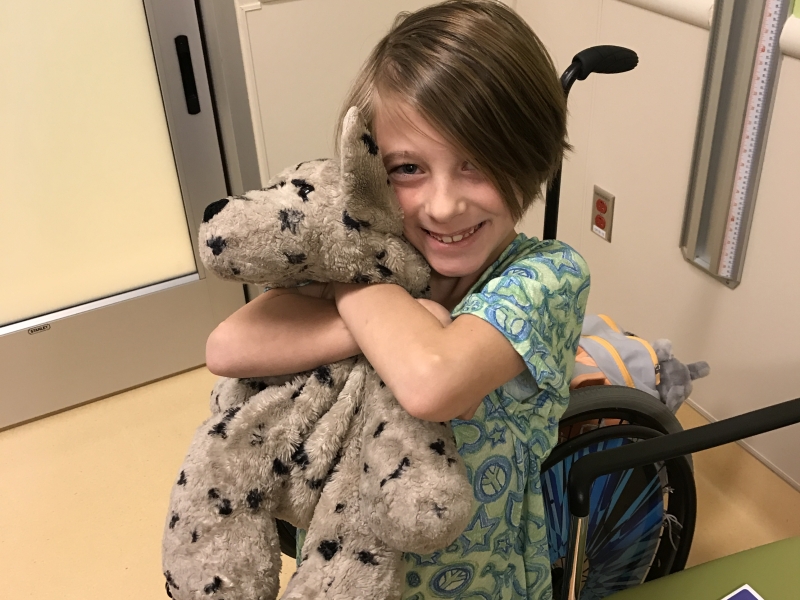