Simon has one last shot

Last month, we had a very special visitor to theCHIVE HQ. HIs name was Simon. He and his mother, Alina Gorniak, had arrived to talk to me about something called Sanfilippo Syndrome. 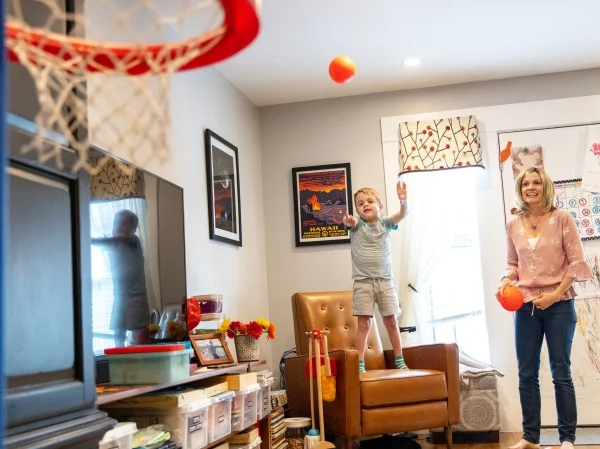 It’s a degenerative disorder in kids caused by a missing enzyme. As a result, toxic storage material builds in the brain. The result is an accumulation of toxins that assault Simon’s brain every second of the day, causing widespread damage. The most immediately recognizable of which is memory loss.

Sanfilippo Syndrome is Alzheimers for children.

When the pernicious disorder becomes fully degenerative, Simon will be unable to walk, talk, or feed himself, and seizures, dementia, and death will follow. It is 100% fatal. 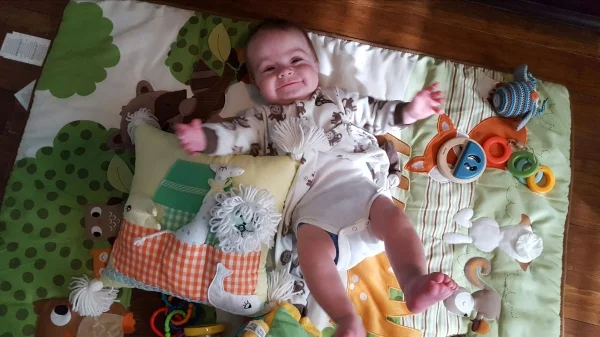 I walked into the meeting 5 minutes late. At a glance, I figured that Simon’s mother had left the other child with Sanfilippo at home or something. In front of me was a smiling, sweet child happily playing with his blocks. Could this really be… Simon?

His mother explained that, around 18 months old, they noticed Simon wasn’t responding to his name and he was missing his developmental milestones. When the Sanfilippo diagnosis arrived shortly thereafter, it was a death sentence.

Now 5 years old, Simon’s development has largely plateaued. Simon needs to maintain his current skills as long as possible. I asked how they do that currently?

Alina withdrew a menagerie of flashcards from her bag. The photos were labeled with the names of people close to Simon. It wasn’t just his grandpa and aunts, “Simon makes sure I include all his doctors and therapists’ photos,” explained Alina. “Simon knows they are helping him and he wants to remember their names when he sees them. Simon is aware he’s not alone in his fight.” In Simon’s world, fighting the odds is a family affair. 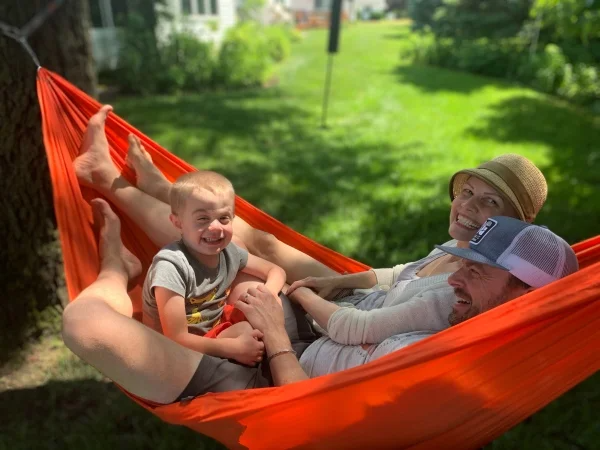 In 2013, Simon’s mother Alina was diagnosed with a very aggressive form of breast cancer. She was told that her dream of having children would be just that, a dream. She survived against all odds and became pregnant with Simon a few years later. C.S. Lewis once said, “Hardship often prepares an ordinary person for an extraordinary destiny.”

Now she is fighting for her own son’s life. It dawned on me that Alina didn’t come to theCHIVE HQ to ask for us to help with Simon’s immediate needs – I’m not sure she knows what a flash campaign is. She arrived for no other reason than to tell us about how desperately they needed to fund new research to help Simon. There is currently a general fund set up for a treatment that might save Simon. Alina just wanted to make theCHIVE aware of it and to spread the word personally. Nothing more.

I asked what he does to keep his mind sharp now? To my surprise,  Alina responded, “Basketball. This kid has unlimited range. He won’t call it a day unless he makes 100 baskets.” Videos of Simon hitting trick shots have gone viral across the internet.

So much of what Simon was doing that day suddenly made perfect sense. The amount of focus he must put into his basketball shots, and even his building blocks, was zen-like. For Simon, focus is exercise for his brain. He uses it to stave off memory loss and the rapid decline that would follow if that is allowed to happen. Above all, Simon wants to win. 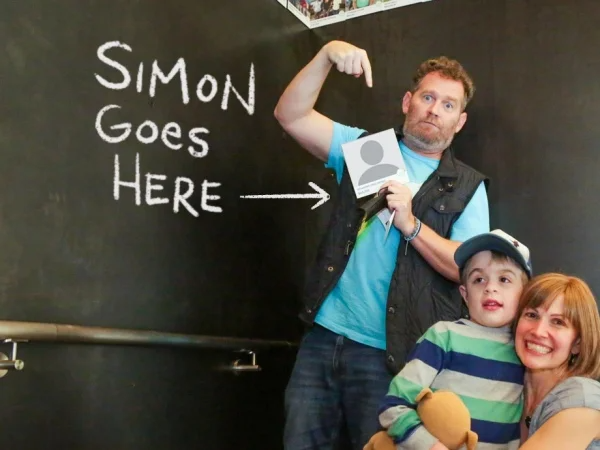 Then I had an idea. I was showing Simon and Alina our charity wall with photos of the 500+ individual recipients we’ve supported over the years. I asked if they’d ever considered raising money for Simon’s immediate health needs. Alina didn’t know how to respond. She and her husband Jeremy have spent every single day in survival mode. The idea of having a wishlist of things they’d like – instead of things they need –  is the furthest thing from their mind. I honestly don’t think anybody had ever asked. These are my favorite moments at theCHIVE.

Oftentimes, winning in health is a game of little advantages. Whatever opportunity you have to gain small, almost imperceptible victories over the enemy can turn the tide. The family needs big items like an Augmentative Communication Device and smaller things like an adaptive stroller, rock climbing to improve flexibility and endurance, even yoga classes. And for good measure, a Spalding NFB Slam Jam Over-The-Door Team Edition Basketball hoop.

Let’s be clear, when Simon begins his decline, he will suffer. The Chivers will not allow that to happen. We have a chance to stave off this decline while doctors scramble for a cure. Today, we will all rise up and give Simon, Alina, and Jeremy what they need most, just a little more precious time as a family. Chive Charities and our donors will be providing $10,000 for equine therapy, swim lessons, and yoga therapy for Simon. The Chivers will handle the remaining items and we’ve set up a GoFundMe with a $15,000 goal. Every dollar we donate buys Simon a little more time. 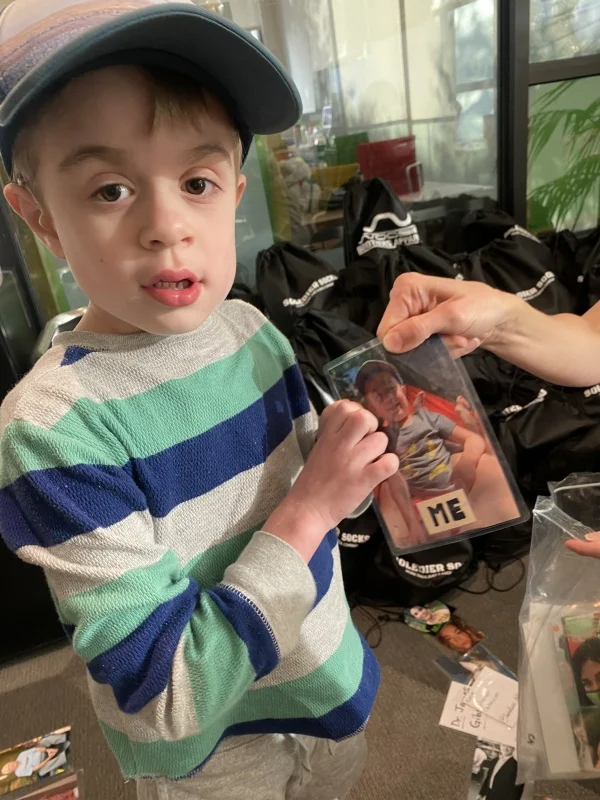 When our meeting was drawing to a close, Simon pulled out one last photo and I gasped. Simon was holding a photo of himself. I remembered his mother’s words, “Around 18 months, we noticed he wasn’t responding to his own name.” ‘Oh my God’ I thought, ‘Simon forgets his own name. He has a flashcard to remind him of who he is.”

The goal is $15,000. Donate here. The family has asked that any amount past the goal be donated to the Cure Sanfilippo Syndrome Foundation to support promising research that could potentially save Simon’s life and other children suffering from Sanfilippo. It’s not our biggest goal, but it’s perhaps one of the most important campaigns we’ve ever launched here at theCHIVE and Chive Charities. A young life is on the line and you have your goal.

Destroy it. Thank you very much on behalf of Simon and everybody here at the HQ.

P.S. It was our monthly donors who kicked all this off with a $10,000 donation to Simon. If you do one thing today, please think about becoming a Green Ribbon Fund Donor at Chive Charities. We are making the world 10% happier.

UPDATE #1: I went for a walk, came back, refreshed page, and BOOM! Goal hit. Simon is in the office watching this. More on that soon, but this is pretty amazing.