How do you heal invisible wounds? 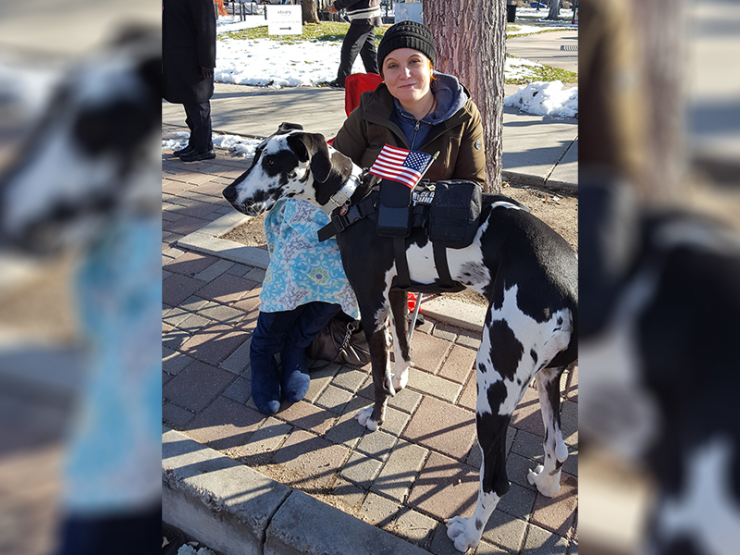 What defines a person’s character? One metric that never fails is one’s response to chaos and fear. One example of chaos and fear we can all call upon, for example, is the attacks on 9/11.  While sorrow and panic prevailed for many, some were instead filled with a burning passion to act. Our recipient Heather is one such person.

On September 11, 2001, high school aged Heather decided that she would follow in her older brother’s footsteps and join the Army. As a female, she was not allowed to be a Ranger like her brother, so she joined the only military occupational specialty (MOS) within the Special Operations community open to women at the time: Psychological Operations. And she absolutely thrived. Heather soon became Airborne, learned to speak Arabic, and absolutely loved and excelled at her job. 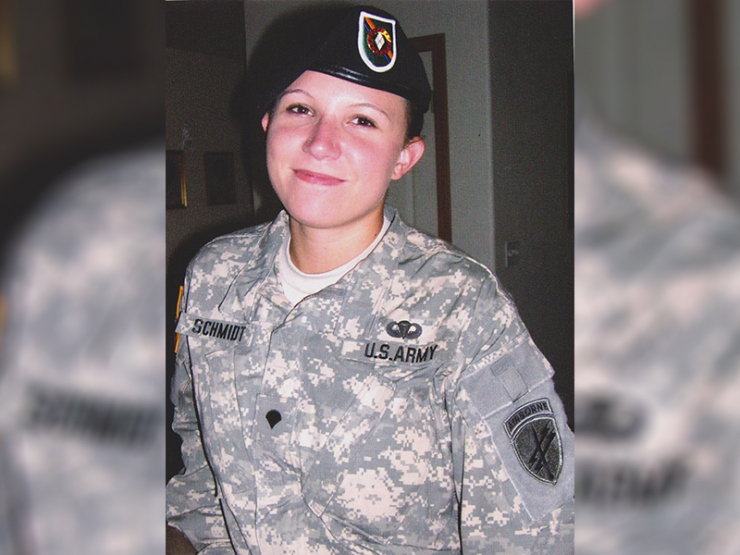 She had found her groove, her mission in life, her purpose. And then, it all began to crumble. One day while deployed, she was taken at gunpoint as the victim of a violent crime. While she came out of the ordeal physically safe, the damage to her sense of safety had been done. Still, she tried to put the terrifying ordeal behind her, choosing to focus even harder on her job. 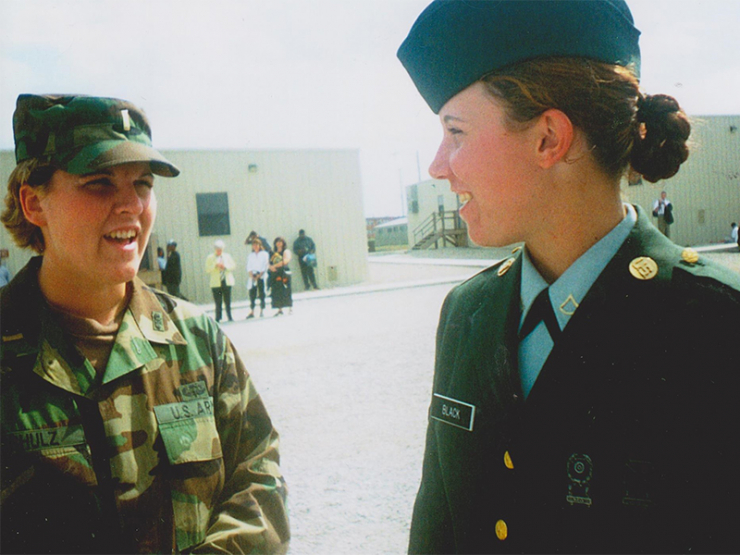 But when your job involves jumping out of planes, things aren’t guaranteed to go smoothly. Shortly after the attack, on a jump from the side door of a C-130, Heather ended up with a poor exit. She bounced off the side of the aircraft which threw her out of the proper body position. Having the wind knocked out of her caused her to lose consciousness for a moment. When she came to, her risers were twisted and she was descending fast. She managed to gain control of her canopy, but crashed to the ground in a dazed and panicked state. She had survived, but falling out of a plane would prove to be minor compared to the struggles yet to come. 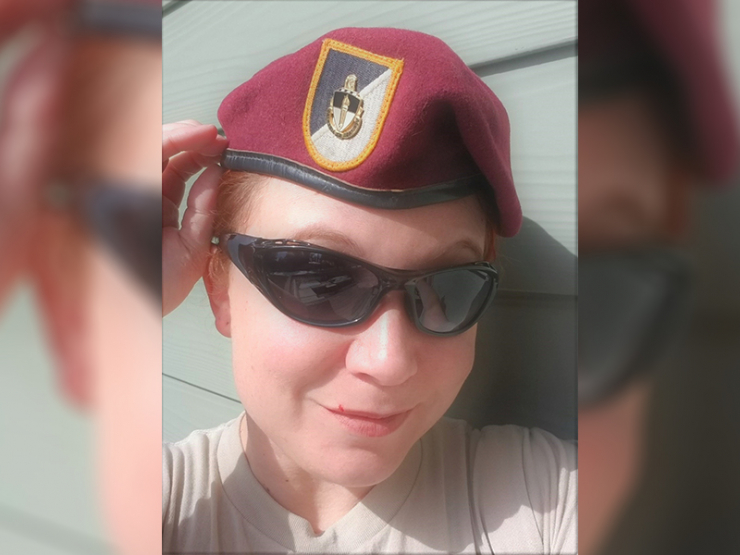 After the accident, Heather developed tinnitus and began having balance difficulties. She lost consciousness one day in formation. Her mind had fought against her before; now her body was tapping into the fight.

After all of this, though, Heather would not give up; she remained in the Reserves until 2009. Even the strongest chains wear down and snap, though, and Heather was barely holding things together.  Her PTSD along with all the injuries she had sustained became too much for her to bear, and she had to quit the Army completely.

The physical toll her accident took on her left her with a long list of issues: She went through 10 surgical procedures which led her to have to walk with a cane for a couple of years.

The effects of multiple minor traumatic brain injuries led to short-term memory loss and concentration issues. She was also diagnosed with a severe case of a neurological disorder called Postural Orthostatic Tachycardia Syndrome (POTS), which causes her dizziness upon standing or changing posture, leading to frequent fainting, accompanied by convulsions, concussions and occasional loss of control over bodily functions. She began having episodes where it felt as though a flash grenade had suddenly set off - she would become disoriented, hearing a loud ring of tinnitus, then the world tipped over in a spell of extreme vertigo and I would fall sharply into whatever was near.

As a Veteran, Heather is often told she is a hero. With her body and mind working against her, Heather didn’t feel like a hero. Heroes don’t cry, right? What pained Heather the most was that from the outside, people saw a warrior, while on the inside, she suffered from invisible wounds that were bleeding her dry. 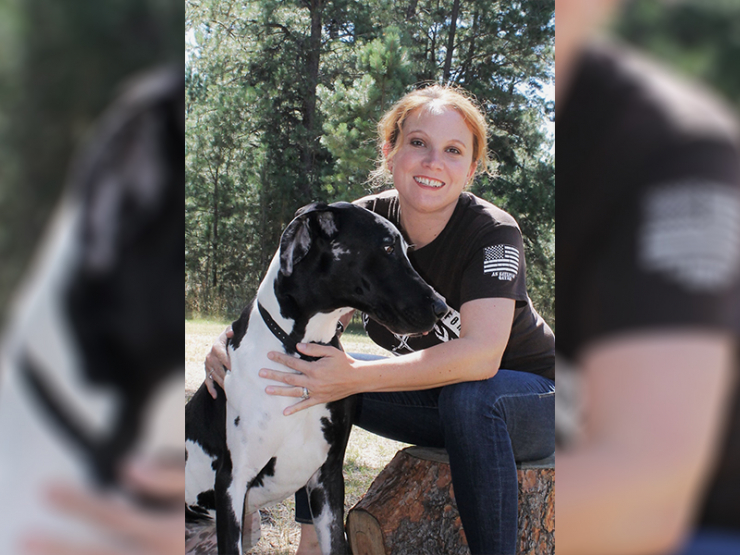 Her world was spinning, and it wasn’t just the vertigo. Swirling inside Heather’s head was a toxic sludge of self-doubt, sorrow, and guilt. She could never be a good enough mother to her children. She would never be the person she imagined she could be before her injuries, before her attack. The pressure built, the toxic thoughts burned in her mind, and Heather found herself in the place she had tried to avoid for years: locked in her closet, loaded pistol in hand. In that moment, her thoughts shifted to her brother, who had taken his own life just a year before. Remembering her family’s pain after her brother’s suicide was not enough to keep her from lifting the gun to her head; in fact, the vitriolic voice in Heather’s mind told her that her family was better off without her.

Thankfully, Heather’s husband found her before she could pull the trigger. After that day, Heather saw the pain in her husband’s eyes; he was scared to leave her alone. She was scared to be alone. That’s when Heather had an idea that would change her life: she decided to get a dog.

Friends, meet Nessie. This big girl puts the “great” in Great Dane, and she’s Heather’s new best friend. Not only is Nessie a cuddly companion, but she is in training to be a service dog as well. Nessie is not your typical service dog; big breeds like Great Dane’s aren’t often used in this capacity, but for Heather’s needs, Nessie is absolutely perfect. She’s big enough to catch Heather if she falls. Because of Heather’s neurological conditions, she is at constant risk of falling down and hitting her head. In fact, Heather was in the hospital with a concussion earlier this year after a particularly nasty fall. She was asleep for 3 entire days before she finally came back to consciousness. 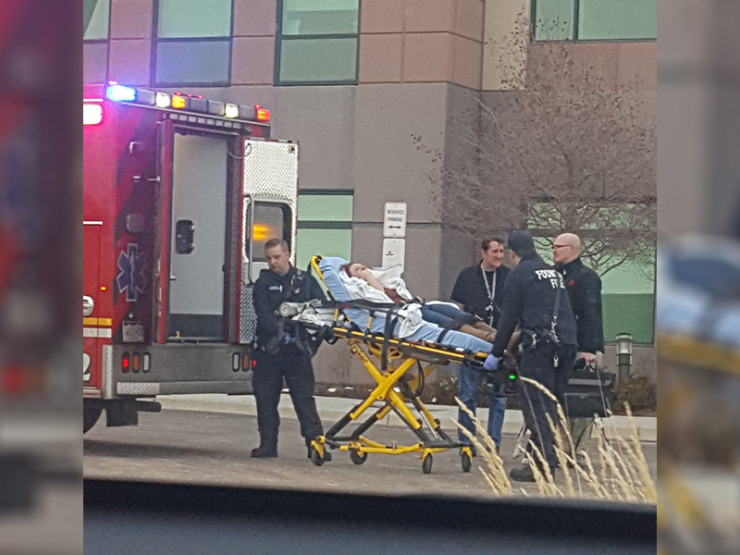 The compounded post-concussion syndrome affected her vision, ability to walk around for any length of time, and even her sense of smell. Nessie’s service dog training is now more important than ever; Heather cannot take any more hits to the head. 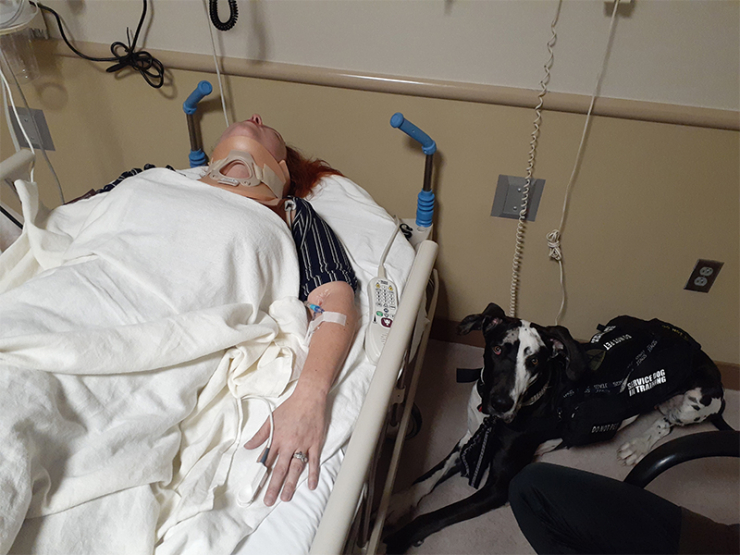 Unfortunately, though, service dog training is NOT cheap. The amount (around $10,000) was jarring, but Heather and her husband were determined to make it work. Heather’s needs were becoming more apparent every day, and she didn’t have time to wait on a list for financial aid for years. The price stood like a wall between Heather and happiness. And that’s when Chive Charities came in. 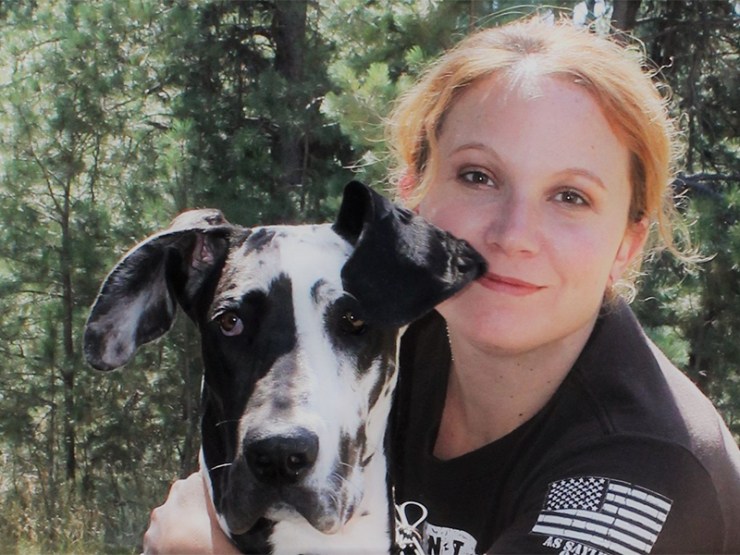 Heather, the go-getter that she is, had already come up with most of the money for Nessie’s training. But it is you donors who are bridging the gap! Thanks to you guys, Chive Charities is able to grant Heather the $2,240 she needed to get Nessie certified. The wall standing in her way has been knocked down, thanks to your monthly contributions. 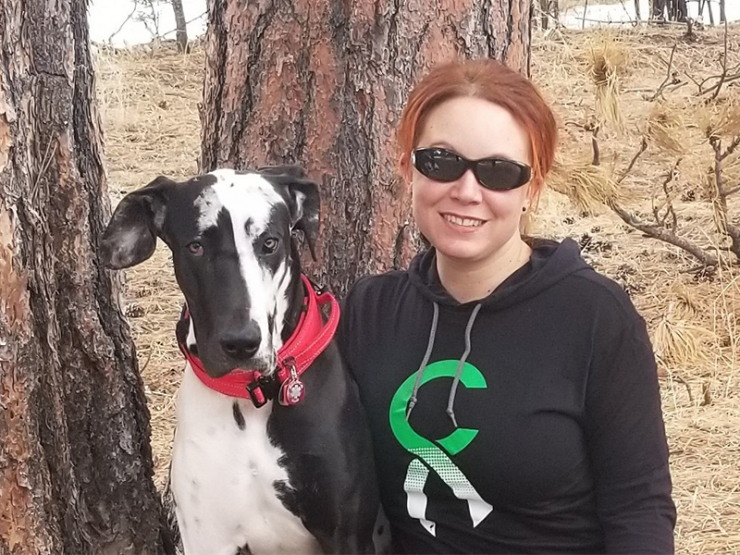 Heather has overcome huge hurdles in her life, but the thing that’s making the biggest difference in her life is, by comparison, so small. Simply having a dog by her side who can help to catch her if she falls, and who can provide all the love and emotional support a dog can bring, is helping Heather reclaim the life she once knew. Heather deserves to feel like a hero, because she is one. Well, you can be a hero for people like Heather by becoming a Chive Charities donor today. It’s the little things that add up to real, quantifiable change. Are you ready to change the world? Get started HERE.

If you are a Veteran and you are thinking of harming yourself, or fear you may do so in the future, please call the Veterans Crisis Line 1-800-273-8255 or visit their website HERE.