Ricky is hero and survivor who inspires those around him

In September 2008, Ricky Raley was nearing the end of his first deployment in Iraq with the Army National Guard. He had formed a close bond with the other members of his unit – a bond that can be difficult for us civilians to understand.

The men and women you serve with in combat experience some of the most extreme moments of fear, sadness, joy, and camaraderie. In the moments when the mortars whistle in or the bullets whiz past, there is no one else in the world but the people to your left and right. There is a level of understanding and mutual appreciation for one another when you realize that the survival of your friends is essential to your own. 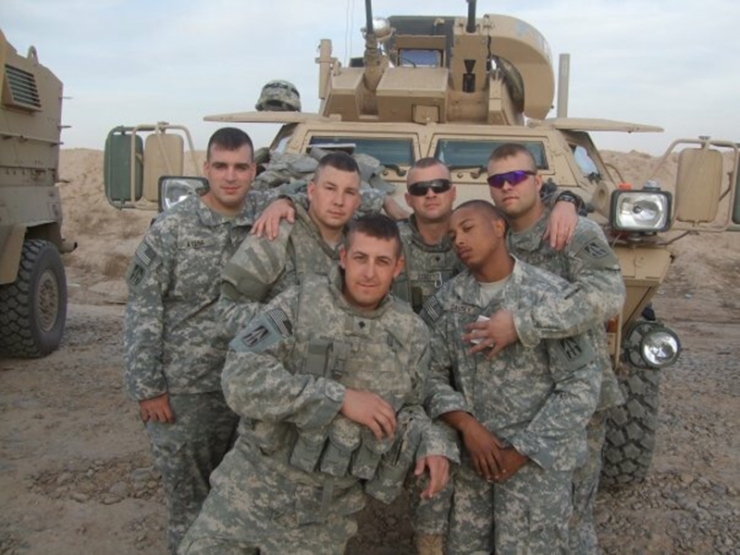 With his unit, Ricky had taken to volunteering as the lead gun truck for every mission. Ricky always wanted to be in control of his own destiny and protect his friends following behind. 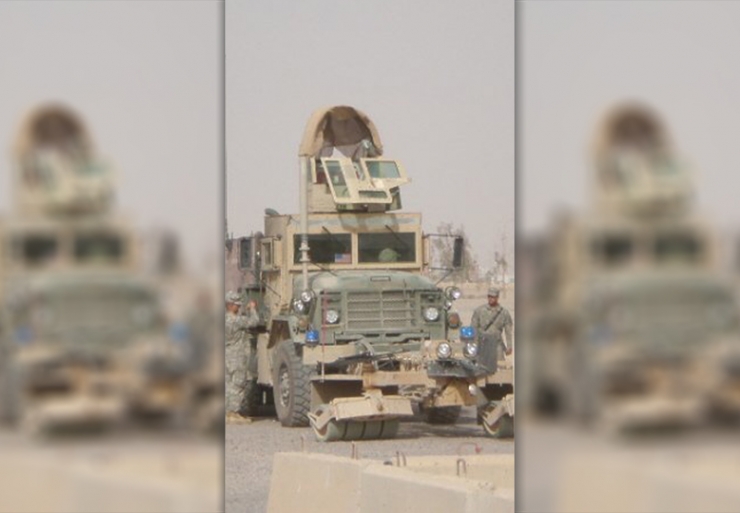 During one mission, Ricky’s truck was leading the way when his mine roller tripped an IED (improvised explosive device). Once the dust settled and the ringing in his ears subsided, Ricky’s unit was able to patch up the truck and make the painstakingly slow, 2-hour trip to complete the mission with a hobbled truck. Ricky along with two others in the truck at the time of the explosion received purple hearts for their efforts. They also each sustained mTBI’s (mild traumatic brain injury) from the blast. Ricky would be returning home with non-visible scars but at least he was returning in one piece.

For many returning soldiers, the transition back into civilian life can be tough. For Ricky, it was no different. What came naturally to him before seemed strange to him now. Mentally, something had changed in him. He longed to be back in Iraq on the line with his buddies where he felt comfortable. On April 17th 2009, everything changed.

Ricky and his friend were driving down a backcountry road in Westfield, Indiana. They were headed to a buddy’s garage to pick up powder for a motorcycle frame Ricky was powder coating. It was a drive they had made thousands of times. It had also been months since Ricky returned home from his deployment to Iraq and the dangers that come with carrying out his unit’s missions. There was no reason to believe that his life was in peril that particular day.

Before anyone knew what was happening, Ricky’s friend lost control of the truck and they tumbled, end over end, into a ditch. 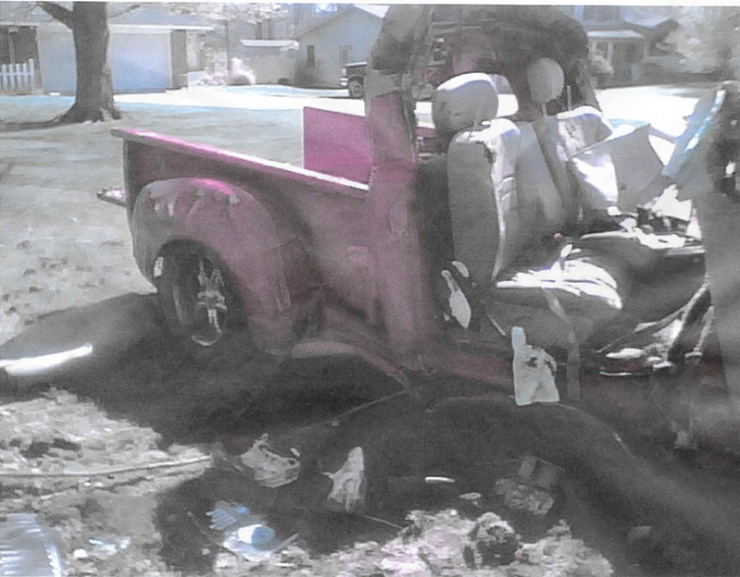 Ricky awoke to an EMT hovering over him trying to figure out what happened. As if in a dream, it took a while for him to feel anything and process what had happened. Then, reality set in. Ricky’s arm was completely broken in half, and he was now paralyzed from the waist down.

In the days that followed, everyone around Ricky was devastated. His friends and family felt sorry for the hand he was dealt. He had every reason to give up. But that simply is not Ricky. He was in control of his own destiny. From his perspective, there was no reason to feel sad about something he could not change. He had a duty to his future wife and his unborn son to pick himself back up and be strong for them. So just 5 days after the accident and after multiple surgeries, Ricky was already in physical therapy. 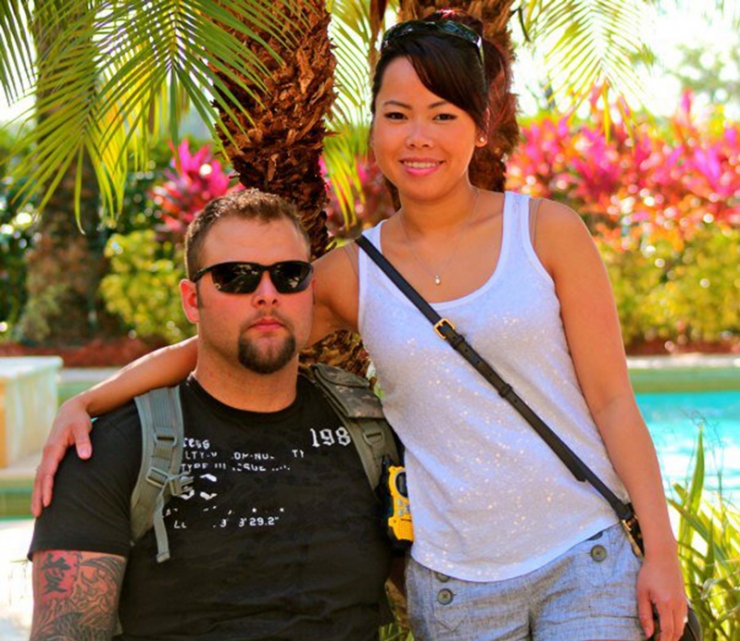 Ricky and his wife Quynhmy, who was 4 months pregnant at the time of the accident.

The first year after the accident was the most difficult for Ricky. While he was overjoyed when his wife, Quynhmy, gave birth to their son, the reality of the challenge ahead set in. Trying to raise a son while adjusting to life in a wheelchair and dealing with the mental scars of his time in Iraq took its toll. A cold and dark Midwestern winter confined Ricky inside for many days, which did nothing to help his mental state. 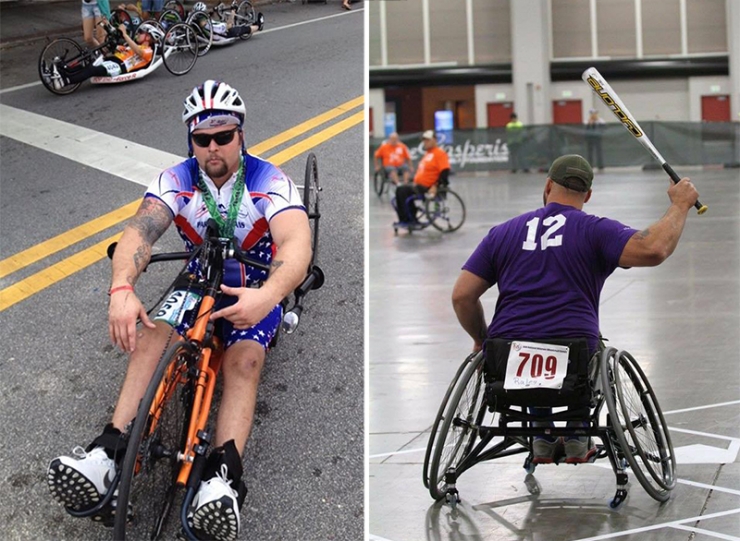 When spring came, Ricky found a passion that gave his life new purpose: adaptive sports. He got an adaptive bike and before long he was competing in marathons. He joined a wheelchair basketball team that won two national championships. “It pulled me out of the darkness I was in for some time after the injuries,” Ricky said about his new passion. “I found some freedom in being able to train hard and compete again” Perhaps just as important, competing on a team again helped fill a void left behind in Iraq. His teammates became his new brothers in arms. 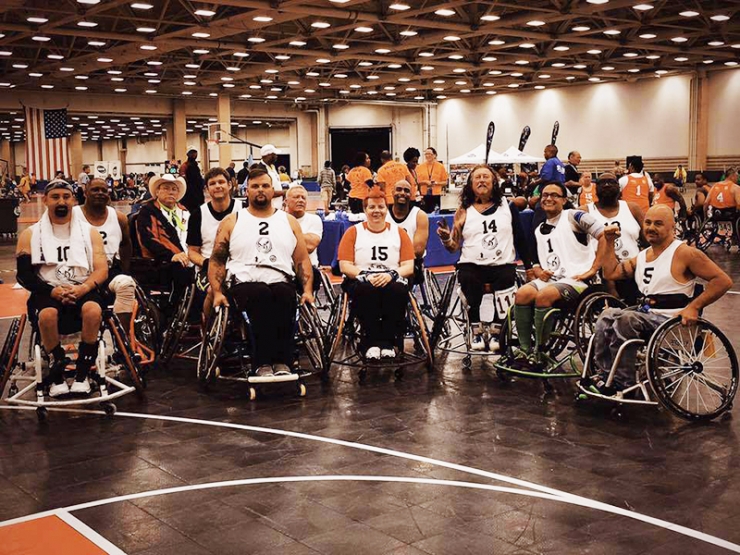 Over a thousand miles from Westfield and Ricky Raley, Chive Charities was outlining some of our goals for 2016. John, Leo and I had just tasked Angie Cone with helping more veterans than ever before in Chive Charities’ history. Angie knew a key component of reaching that goal would be to connect with a trustworthy network of nonprofits that also assist our veterans.

It did not take long to find The Boot Campaign, a nonprofit dedicated to raising awareness of the unique challenges service members face during and post-service as well as providing assistance to military personnel, past and present, and their families. At the time, the Boot Campaign was working on an exciting campaign called the Backyard Refresh. Boot Campaign & Mike’s Hard Lemonade were teaming up to show gratitude to our troops through performing backyard makeovers to deserving veterans and their families. Ricky Raley was one of those chosen for a refresh. Immediately, we knew that Chive Charities needed to be involved in some way. 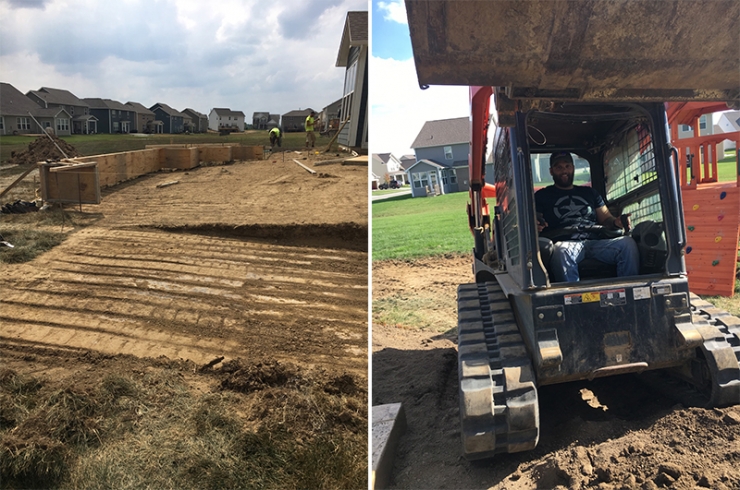 Ricky’s backyard refresh begins and he even gets in on the action! 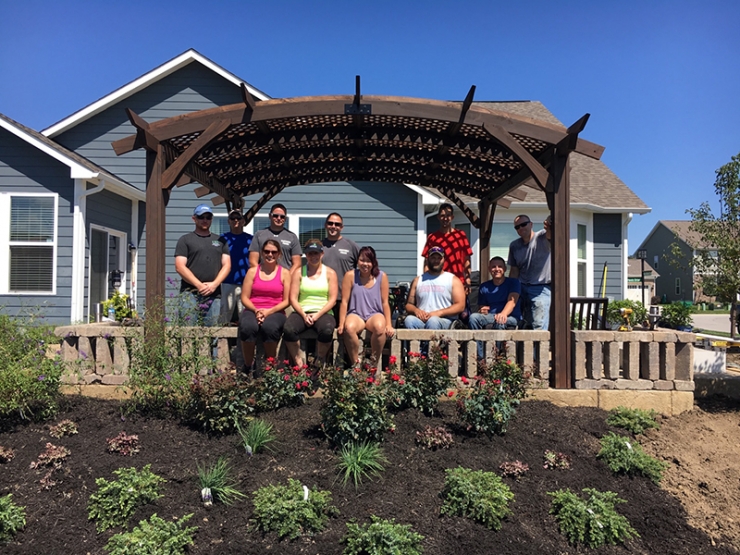 Ricky’s backyard refresh was almost complete. It was missing just one thing…

Since discovering adaptive sports, Ricky has chosen to use his unfortunate circumstance to inspire and help others as the director for the Paralyzed Veterans of America Indiana Chapter. When individuals in similar circumstances see all that Ricky has accomplished, they are inspired to push themselves to heights they never thought possible.

For Ricky, there is an unaccomplished goal still looming over him that he knows he can one day achieve.  Ricky is determined to complete a triathlon. If you ask him what is holding him back, he will tell you it is the training required for the grueling swimming portion of the race.  Getting to a public pool to train can be a challenge and embarrassing at times. Without the use of his legs, Ricky’s swimming motion and big body take up a large amount of space, disturbing the other swimmers. 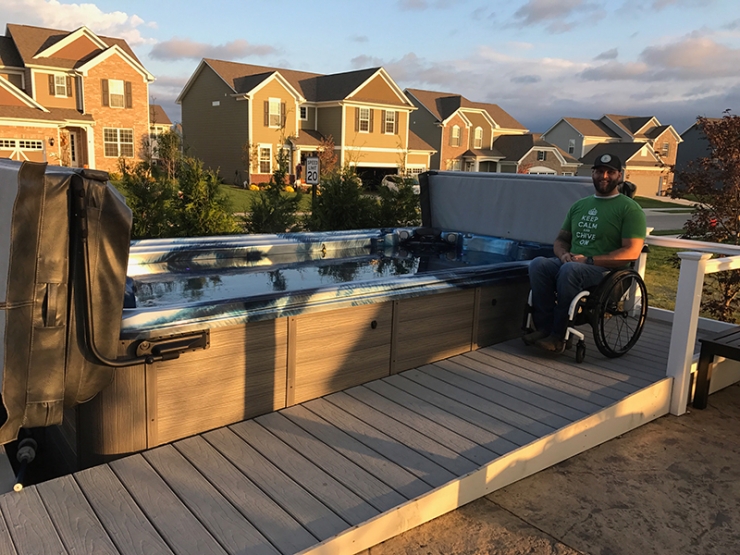 What he really needs is a therapy pool. That’s where Chive Charities and the Green Ribbon Fund donors come in. With a grant of $22,000, we were able to purchase and install a therapeutic swim / spa in conjunction with Boot Campaign’s Backyard Refresh. The spa’s quad swim jet system can now allow Ricky to swim in place against the the current of the jets. He will no longer need to spend the time going to the public pool where he feels all eyes are on him as he uses the lift to get in. The spa will also allow him to spend more time with his family who is his motivation to keep pushing forward. 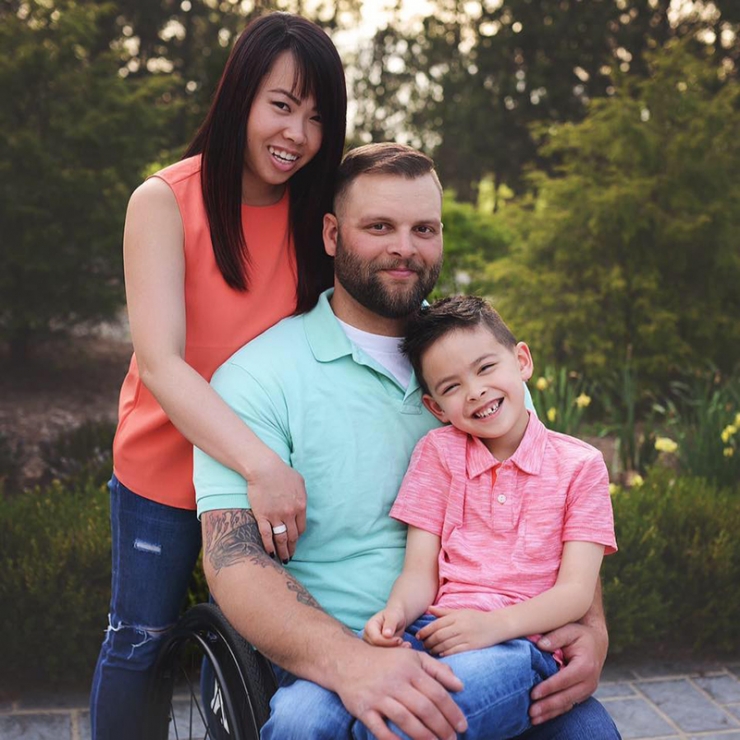 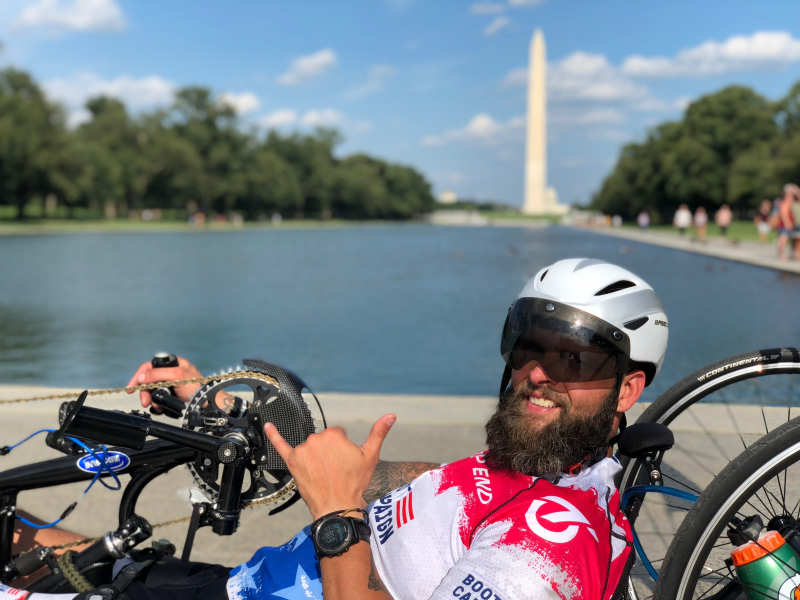 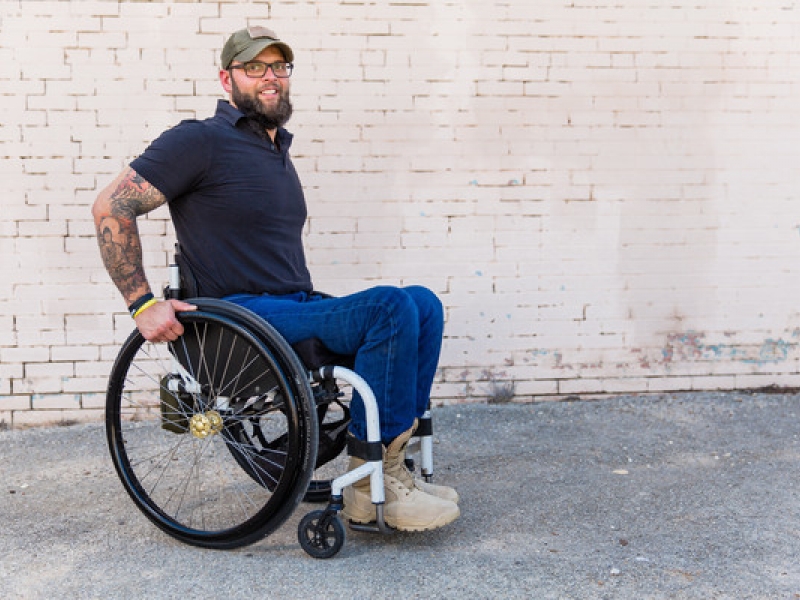 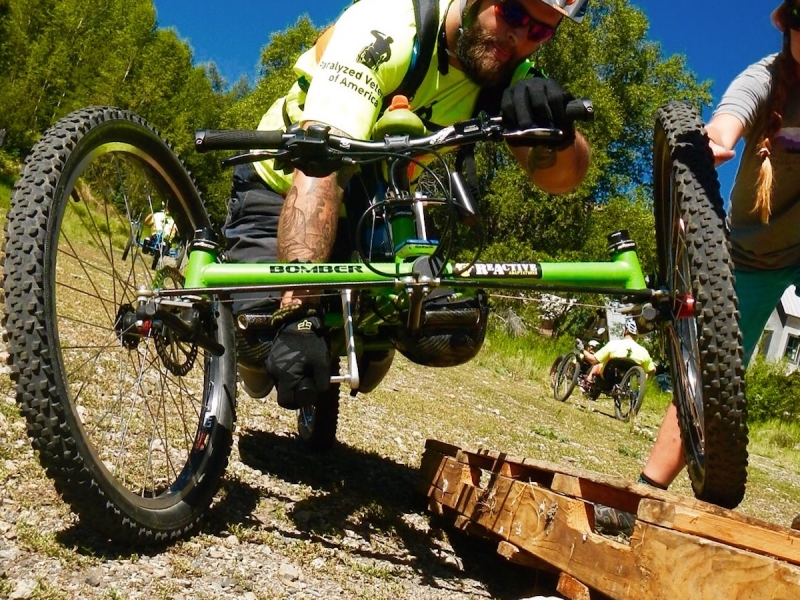