Toto, I have a feeling we’re still in Kansas.

In football, there’s a term called the “blindside.” It’s used to reference the opposite direction of where the player - most often the quarterback - is facing when in the pocket. They can’t see what’s coming, so they rely on others to watch out for them and provide support until they’re in a less vulnerable position. It’s not all that different from becoming part of the rare medical community. 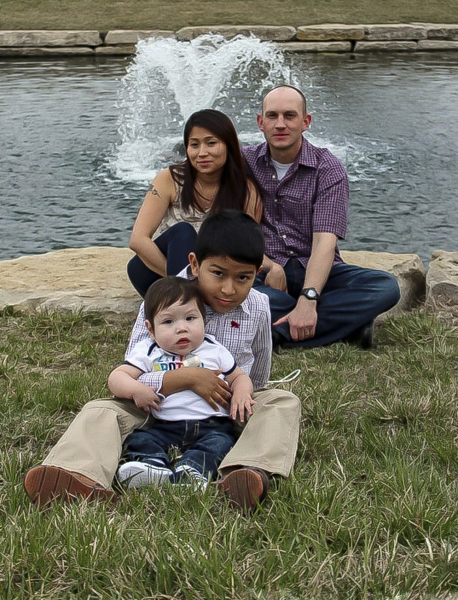 More often than not, families are blindsided by complex and medically-rare diagnoses. In just the last few weeks, we've shared stories about Kai and Eason. Neither of their respective medical conditions were detected until birth and Eason's is yet to be named. The stress, fear, and anxiety that must cause is difficult to comprehend.

It's a feeling that Lee and Mayra know too well.

In early 2012, their family was living in Fort Leavenworth, Kansas as part of Lee’s military orders, and they intended to stay there for two years before reporting to Germany shortly after their son Matthew was born. The move never happened. 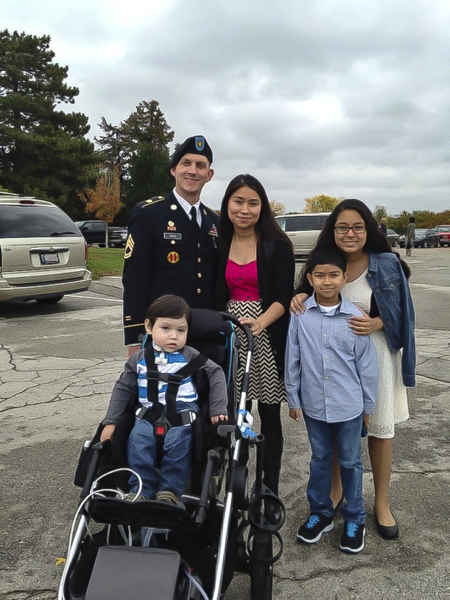 Mayra was at the 8-month mark of a fairly typical and uneventful pregnancy when she became ill with severe flu symptoms and was rushed to the nearest emergency room. After many tests, doctors confirmed the unthinkable: the baby’s spine was abnormal and had not fully developed in utero. The severity of his diagnosis was unknown, but the picture painted by the doctors and specialists was bleak. More stress, fear, and anxiety. More questions than answers.

Before Matthew’s birth, Lee and Mayra knew very few adults with special needs and no other children. There was no frame of reference, no guide book on how to deal with the information, and because of Lee’s military orders - no family or close support system. Yet, here they were with a baby expected to face life-long challenges. They did what any family would do in similar circumstances: they relied on each other.

On May 21, 2012, Matthew was born full-term at Kansas University Hospital. 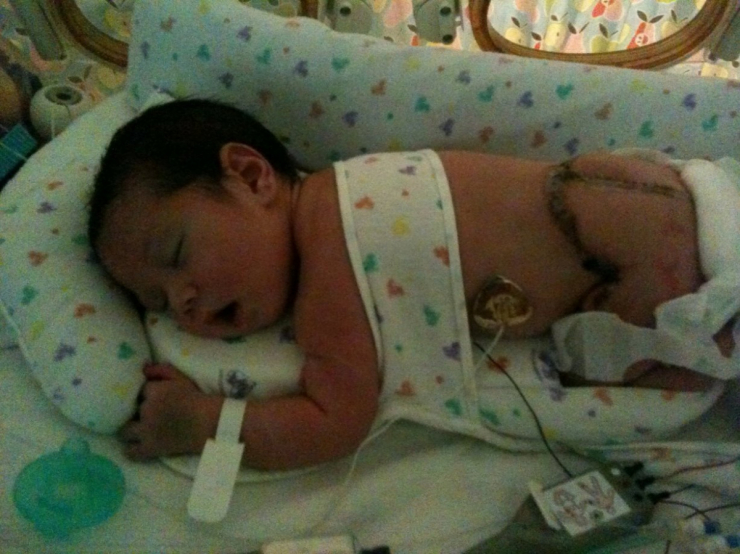 “When he came out, there was a hole in his back and I could see his spine,” said Lee. “Only moments after his birth, he was taken from us and rushed to the Neonatal Intensive Care Unit (NICU).” Matthew was diagnosed with Spina Bifida and Chiari II Malformation along with numerous other conditions.

The next day, Matthew had surgery to close the wound and a shunt was placed in his head to drain excess fluid from his ventricles. At only one day old, Lee and Mayra were becoming experts in Matthew’s condition and care. For the next month, this little family - Lee, Mayra, 5-year-old Jesse, and of course Matthew - spent every day in the hospital, completely focused on getting well and getting home.

It would turn out to be a longer road than they first expected.

Matthew had a lot of complications. After his first month in the hospital, he was sent home, only to return again two days later for apnea and breathing issues. That led to a three-month stint complete with a tracheostomy, ventilator, oxygen, and abdominal gastrostomy tube. All in all, Matthew’s first seven months of life took place within the hospital walls. 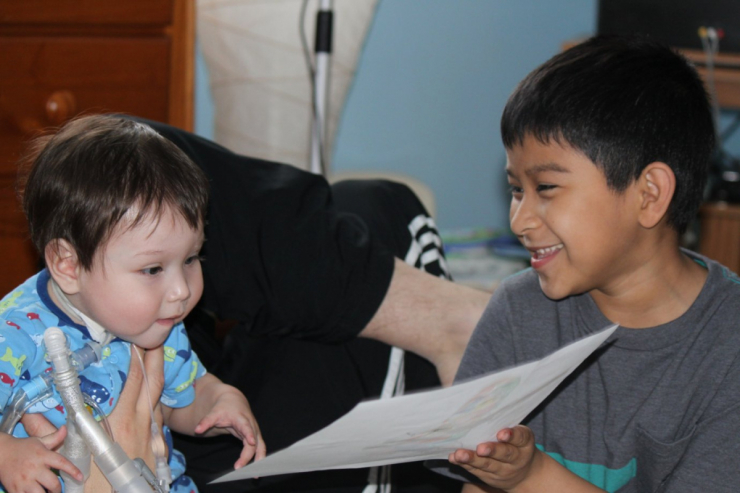 “It was a very stressful time for our family,” Lee said.

Try to imagine that. For most of us, a baby is born and maybe 2-3 days are spent in the hospital before we’re sent home to settle in as a family. Think of spending the better part of a year driving between home and work, knowing your baby was still in the hospital. Add in the needs of an older child who is only five years old himself and you have the perfect storm for an overwhelming and difficult situation. 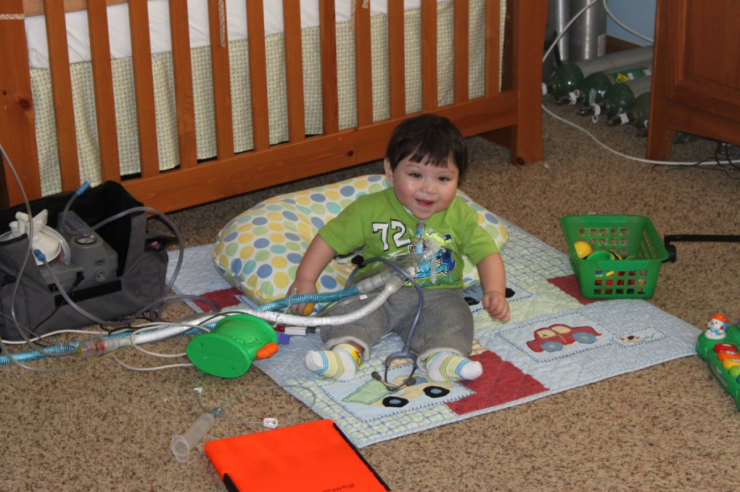 After a long 2012, Mayra sounded like a medical expert on all things Spina Bifida and transitioned to her role as Matthew’s primary caregiver. You couldn’t have found someone better suited for the job. 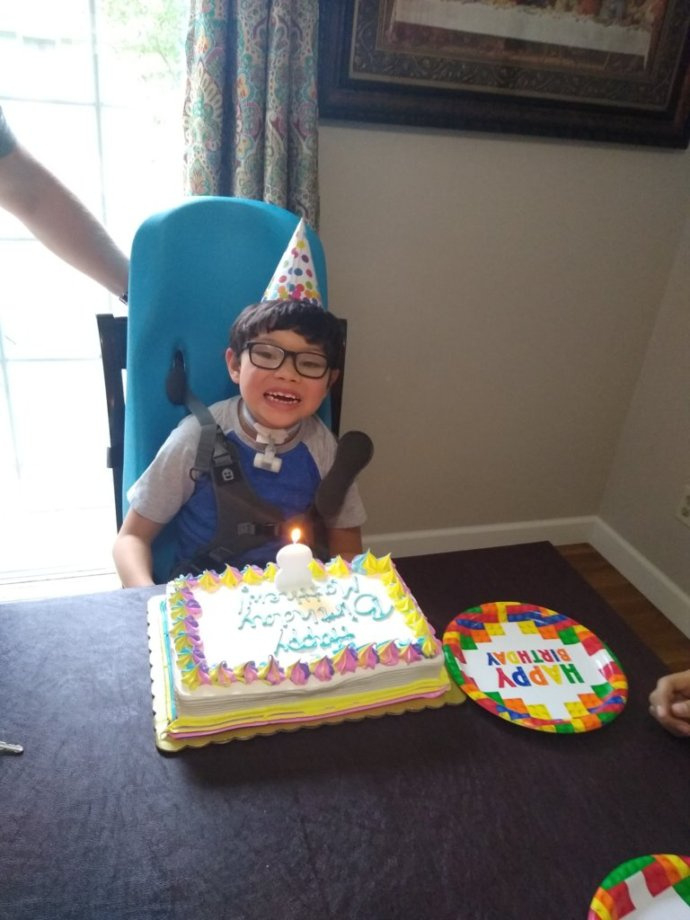 Today, Matthew is 8 years old, and you would consider yourself lucky to know him. Though he has very limited movement in his legs and is non-verbal due to the tracheostomy, don’t think for a moment that these challenges stop him from being him. His personality is a shining light for all who know him. As Lee said, “He is one of the most determined people I have ever met in my life.” 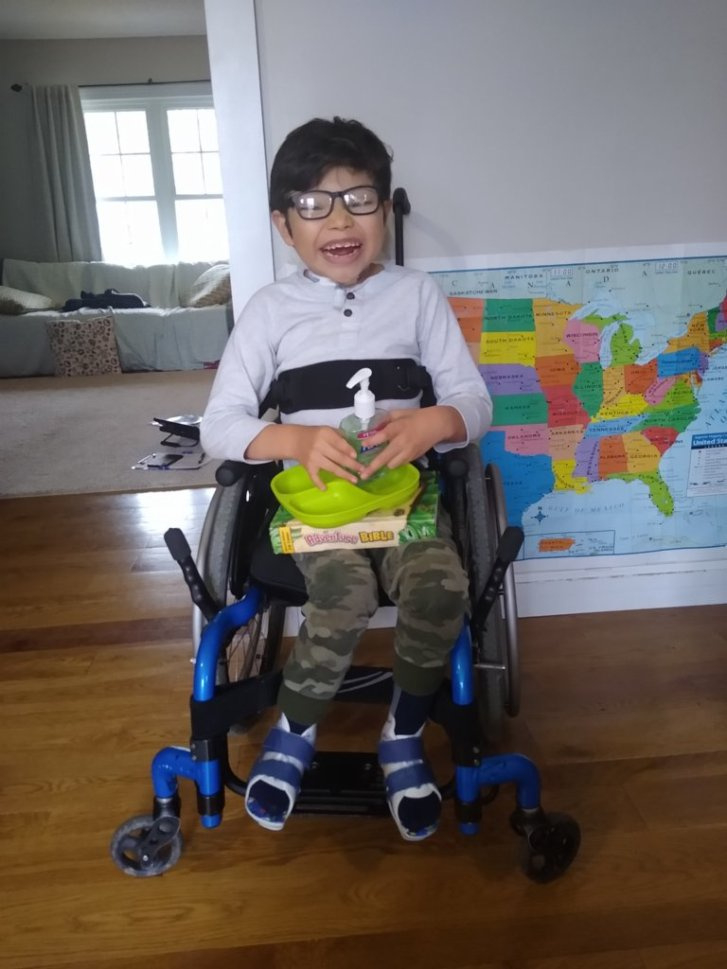 He’s also a jokester, enjoys playing Pokemon, loves church, school, and anywhere new, and has some pretty stellar dance moves. His younger sister Abigail will tell you that “he’s a very good dancer, but he only has one move.” 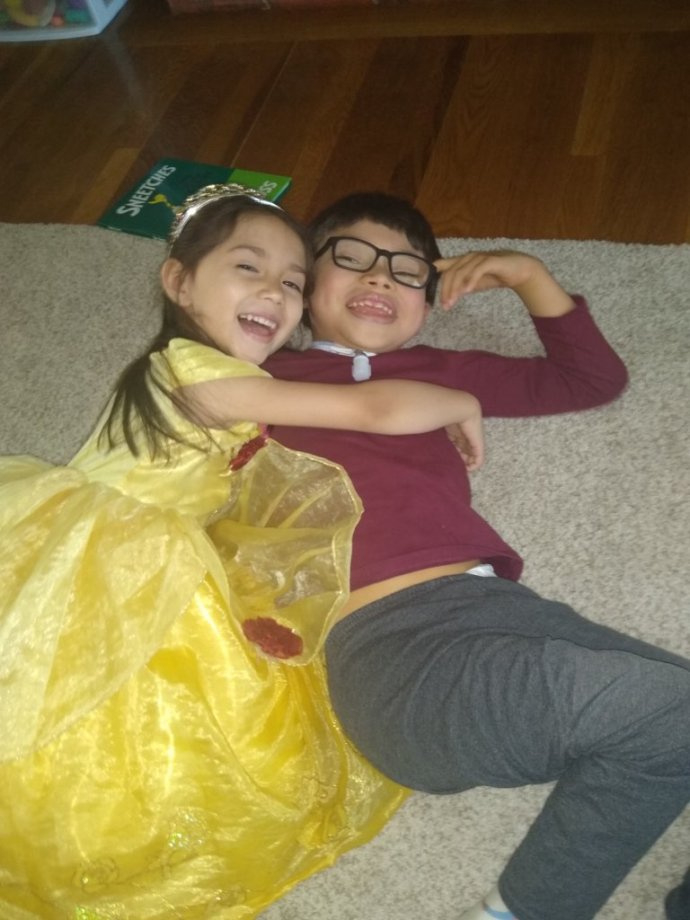 The point is, Matthew is a lot like a typical 8-year-old. And truthfully, his medical challenges haven’t really deterred him...until recently.

While he no longer requires oxygen or use of a ventilator, he does have the burden of needing to travel with his wheelchair. For a family without a wheelchair-accessible vehicle, that poses a big problem. Up to this point, Lee has been able to safely carry Matthew from his chair to the car and back again - but as he gets older (and heavier), that has become more difficult. Remember, Matthew isn’t a homebody. He has church and school to attend! He has friends to be made everywhere he goes. A wheelchair-accessible van would be a game-changer. 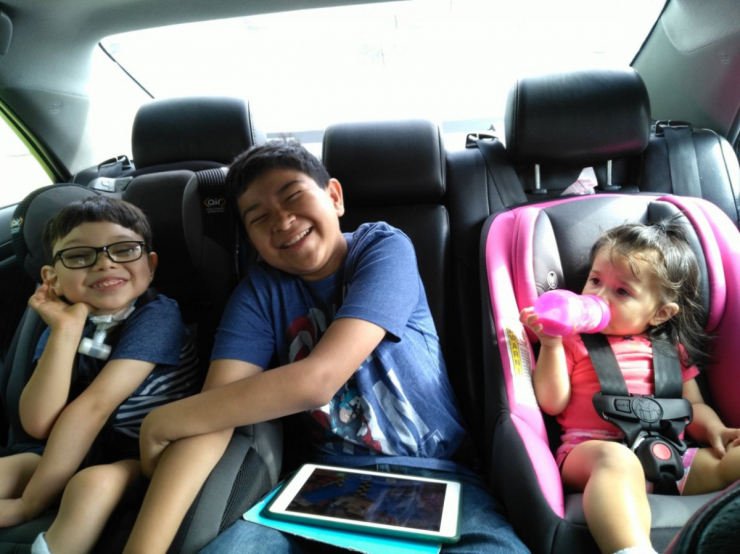 We couldn’t - and we wouldn’t - let him down. And we definitely couldn’t let anyone else miss out on his awesome dance moves. Yes, “moves” plural. (Sorry, Abigail, we beg to differ on this one).

That’s why this week, thanks to YOU, our incredible donors, (psst...you can become part of the donor family right HERE) a $45,279.75 grant is covering a new AMS Vans wheelchair-accessible vehicle for Matthew and his family.

Now he has a chance to continue doing the one thing he loves most of all - getting out into the world and turning strangers into friends. Now his family has a chance to travel, visit family and friends, and continue building their community. 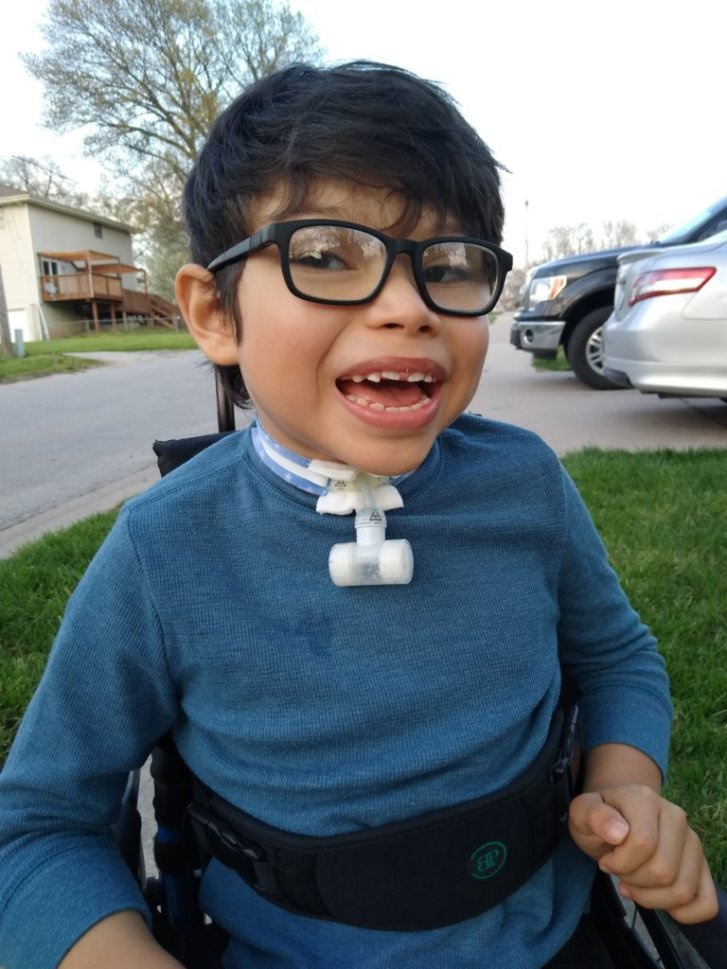 And through it all, Matthew keeps dancing. 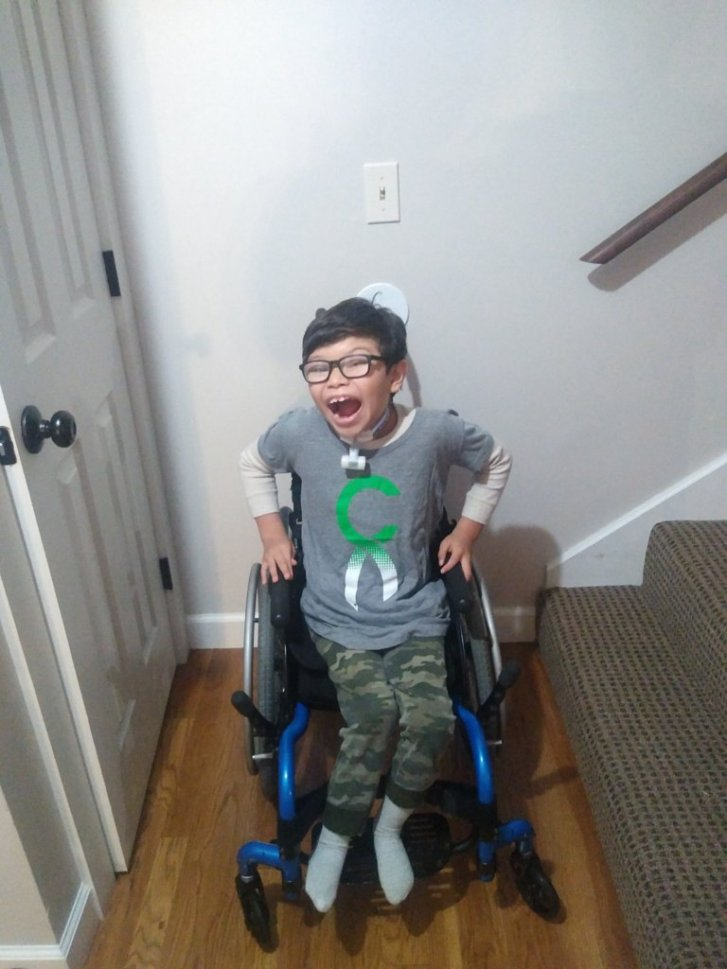 What’s next for this amazing family? With their new van, the possibilities are as endless as the road ahead of them. Now think of all the families out there for whom just getting to the road is a pipedream. There’s more to be done and we won’t stop until Chive Charities has changed the world in a significant way - at least 10% happier. To help us open the window of opportunity for more recipients like Matthew, DONATE HERE.