Sometimes Iron Man is made with a little PVC

Life-saving medical treatments for a year

The only miracle Trent needed was from his little girl, but we decided to give him one more

With words more suited for an Apprentice-esque board room than a hospital room, Trent took his future in his own hands. 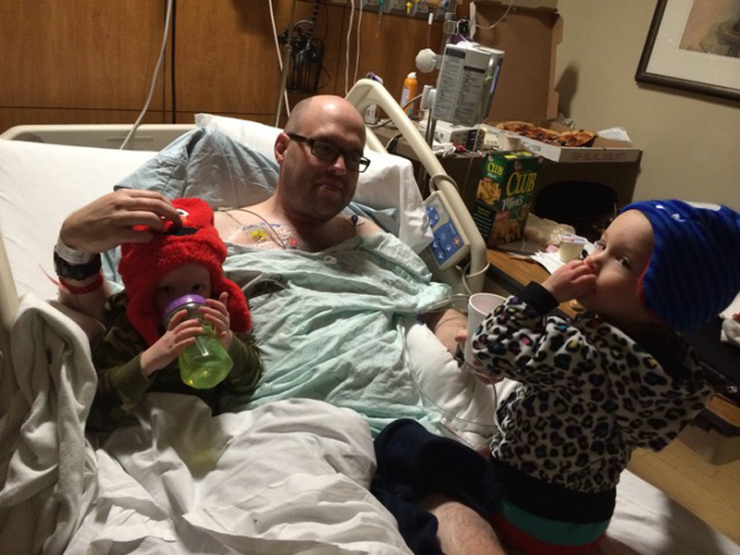 If there’s one thing Trent’s learned in his life, it’s persistence over all. When he was diagnosed with Guillain-Barre Syndrome, he decided this was just another hurdle he had to get over; not just for himself, but for his wife and young children. 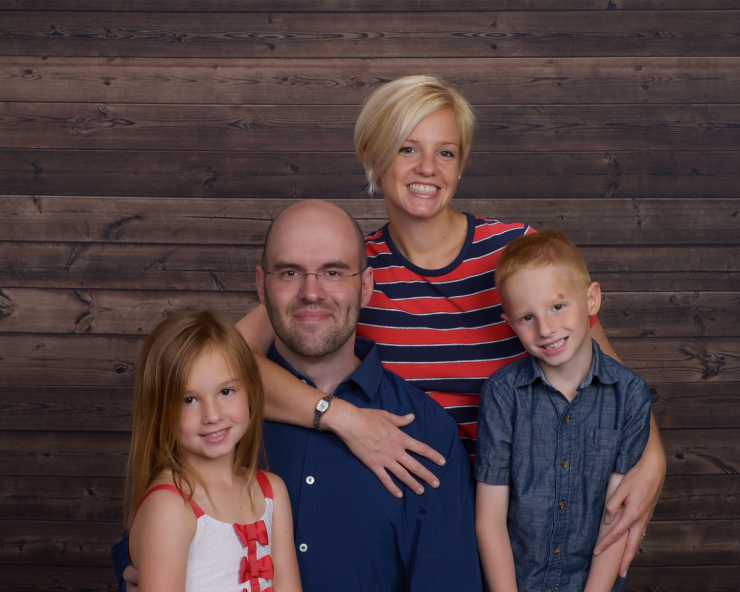 These three smiles are the reason Trent fired his doctor when he was told that he would die from complications of a rare autoimmune disorder called Guillain-Barre Syndrome. His fight with GBS began one day when lost control of his hands and arms while trying to use his phone at work. He fumbled for a while trying to open the cell phone (yes, in the ancient days of flip phones) but just laughed off the occurrence with his coworkers. The next day on the drive home from work though, his legs failed him. His six mile trip home took him two hours, because his feet wouldn’t cooperate to push the pedals.

His wife Nicole insisted that this was nothing to laugh off, and Trent was in the hospital the next day. It was then that Trent realized he could no longer move his legs. He received his diagnosis along with the realization that he was paralyzed. 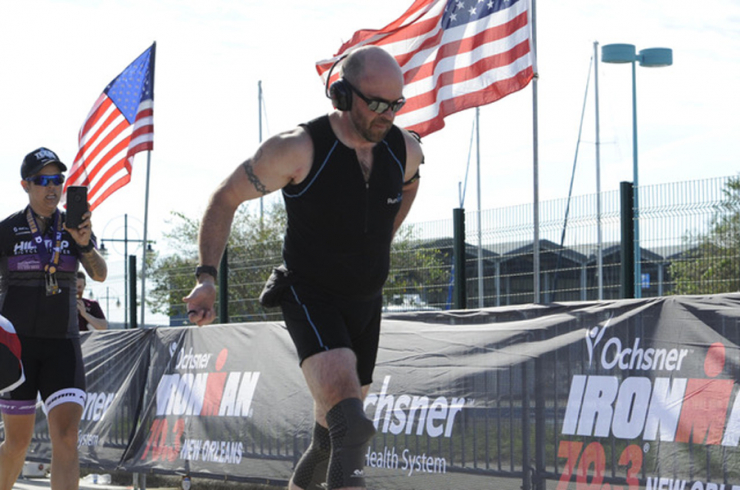 So what is he doing racing an Iron Man, then? Well, getting here wasn’t easy. Trent had to spend months in the hospital over the next few years following his diagnosis to get anywhere close to an Iron Man. GBS is a condition that confuses the body; rather than attacking foreign entities to fight off infections, it attacks itself. This is bad news if not treated immediately. 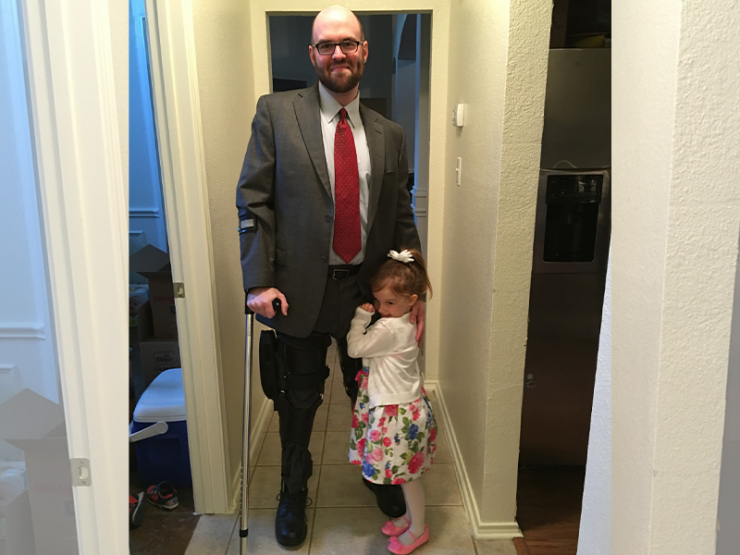 And GBS wasn’t the only problem he has to deal with. You see, GBS typically wreaks its havoc fast, like a tornado; it is gone in several months in most cases. Trent’s fight was a bit longer and tougher thanks to a misdiagnosis around the time of his first hospitalization, where he was treated with steroids which improved his suffering lung condition but only made the GBS worse. 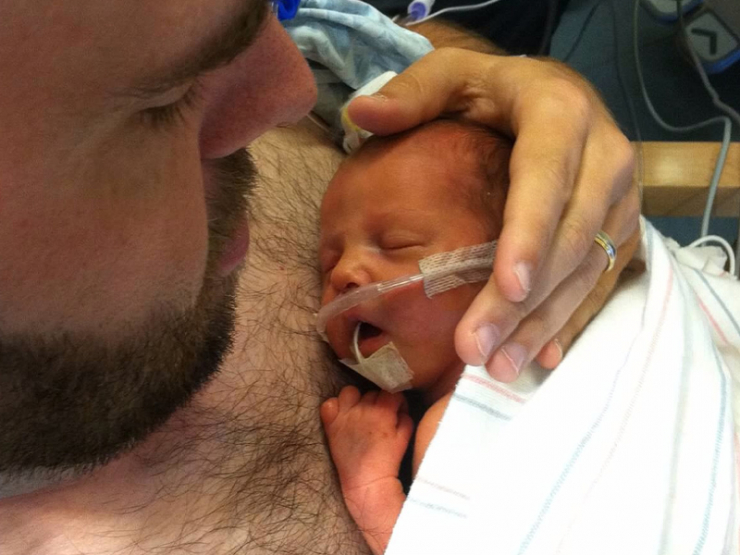 10 months after he began that fight, Trent was diagnosed with Chronic Inflammatory Demyelinating Polyneuropathy (CIDP). This condition isn’t a tornado, but a slowly burning fire that wreaks havoc on his nerves and can result in permanent nerve damage. While he was physically weak, Trent stayed internally strong. He wasn’t giving up without a fight. 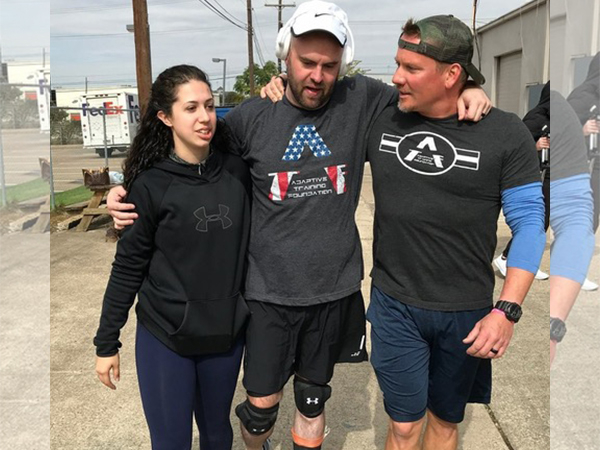 One of the treatment options for his conditions is intensive physical therapy. His daughter had just one wish for the new year of 2016, and it ignited the flame that Trent needed to heal: she wanted her daddy to feel better. Two days later, something miraculous happened. Trent began to get feeling back in his hips. He was on his way to recovery, but there was a long, hard road ahead.

Trent soldiered on and joined the Adaptive Training Foundation. This program for veterans and others who have been injured helps its members get back on their feet --literally-- not just for themselves, but for others. Trent kept working hard on his mobility and decided that he was ready to take on a huge challenge: Iron Man. 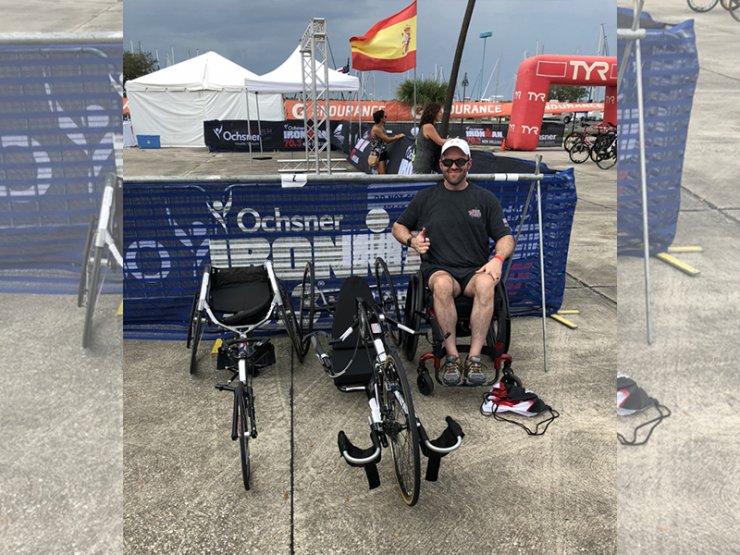 It seemed almost impossible at the time. He was gaining control of his legs, but went through two embolisms and was at one point down to 18 % lung capacity, plugged up to machines. This is when the doctors at his side told him that he needed to start to accept his fate; the CIDP and blood clotting were too severe. According to these healthcare ‘experts’, this was the beginning of the end.

Trent was far from ready to give up, to say goodbye to his family who are his pride and joy. He was not going out like this. 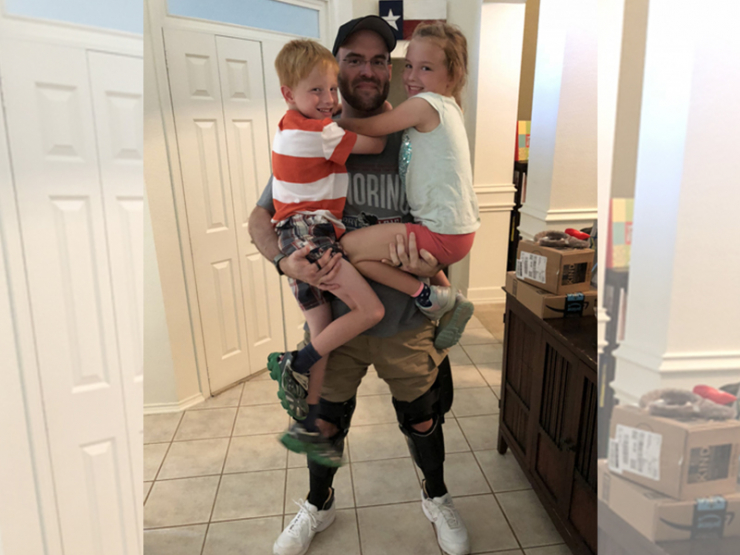 So he trained, and he ran that damn race as an Adaptive Athlete, and he finished it. 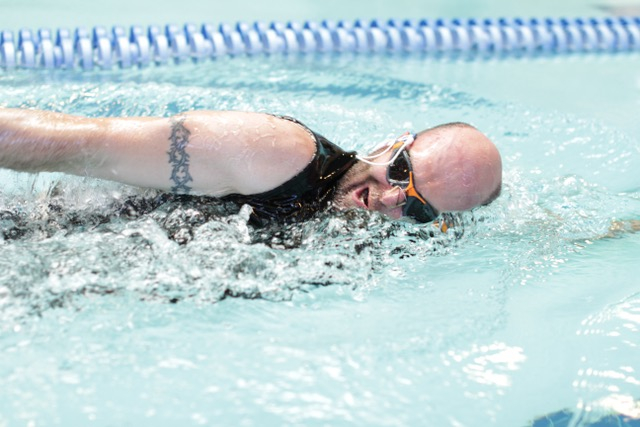 Some might call it a miracle, but it couldn’t have happened without Trent’s unrelenting fight for survival. He had to wear headphones during the race playing music that would remind him to breathe because the damage to his lungs and nerves was so great. And while he had feeling in his legs again, the sensation wasn’t strong enough to complete the race.

Luckily, Trent had some PVC pipe and a golf ball laying around. Far from the typical items on an Iron Man prep list, these are what helped Trent cross the finish line, as he finagled them into a device for his knee. The vibrations on the plastic and the ball fired up the nerves in his legs, telling his brain it’s time to run now. 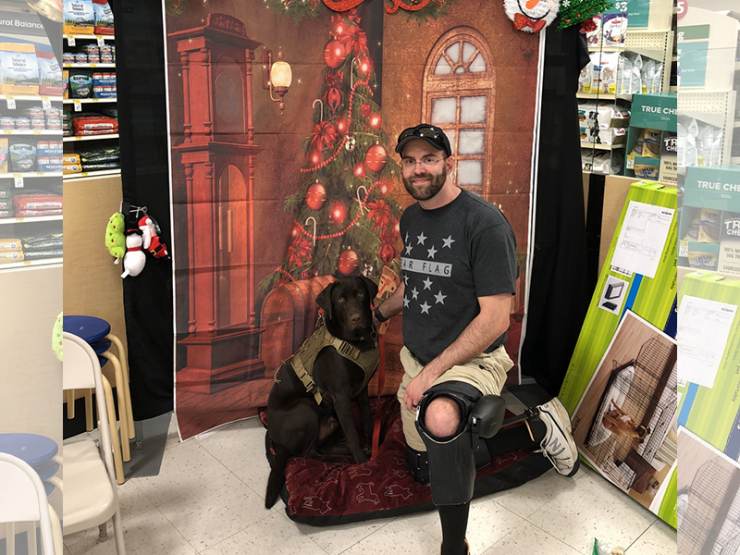 Trent is obviously one of those people who just makes things work, no matter what. But there is only so much he can do alone. To keep his conditions from leaving him in excruciating pain 24/7. Trent receives  IVIG (Intravenous Immunoglobulin) treatments. These injections take 6 hours, and each 5-day treatment course costs TWENTY. THOUSAND. DOLLARS.

Let’s see it in number form, shall we? $20,000! Without these treatments, Trent’s nerves become less able to do their thing. They get weak and unresponsive, which is something you really don’t want to happen, especially around your brain and spinal cord. Once, Trent was forced to go 7 weeks without the treatment, and he was admitted to the ICU. He lost lung function. He writhed in pain. He missed his babies, his wife, and the comfort of his own bed.

When Chive Charities heard about Trent, we knew we had to help. 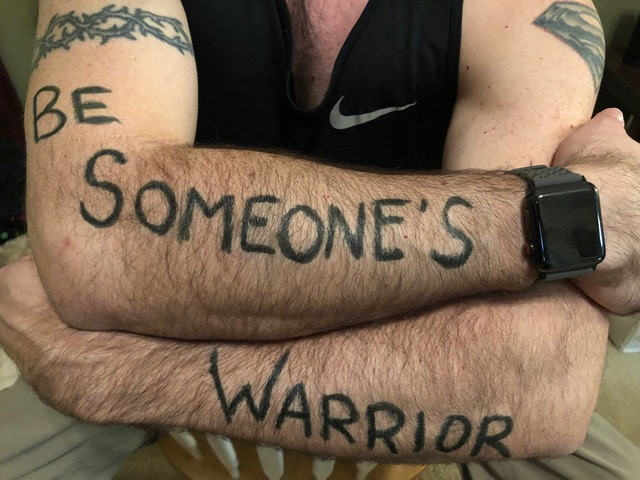 These treatments are what keep Trent alive and doing things like running Iron Man races to inspire and honor others who are battling similar conditions. Trent is a force for good, and thankfully, so are our donors.

We donated $13,500 to Trent and his family to allow him to keep receiving these treatments for a year. This is all thanks to the contributions from our incredible donors. Trent has done so much for his family, his ATF pals, and himself… It was time to lighten the burden. 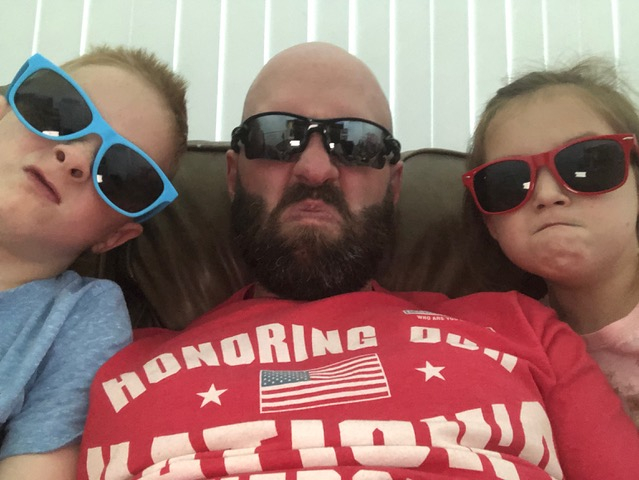 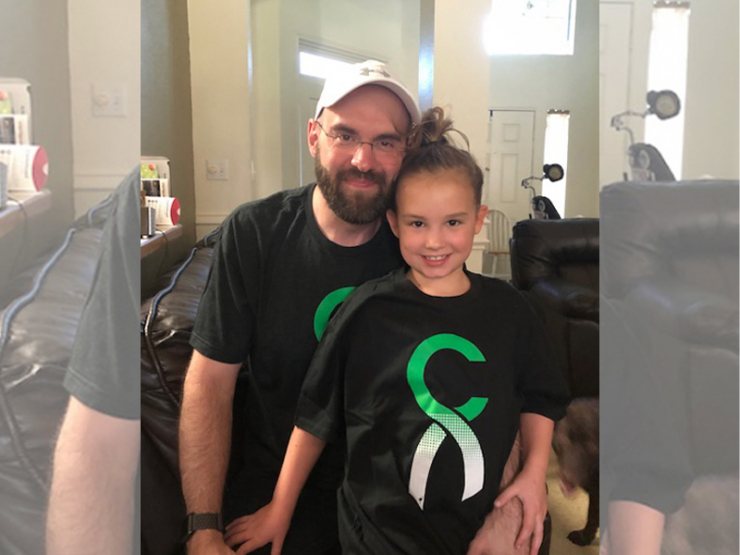 When you become a Chive Charities donor, you are not just donating your Starbucks money to some faceless corporation; you are donating it to Trent. You are giving these kiddos another pain-free day with their dad. You are letting the forces of good like this one here know that they are not alone, because they are a part of the Chive family.

You can change someone’s life today by donating whatever you are able to Chive Charities. To get started, click HERE