His gameplan: Drive the lane

For our starting lineup, he’s a 6’7” dynamic powerhouse from Clinton, Connecticut, the youngest of four brothers and also the tallest, give it up for Daniel Rinaldi!

(If we wanted to accurately represent Daniel, that had to be done.) 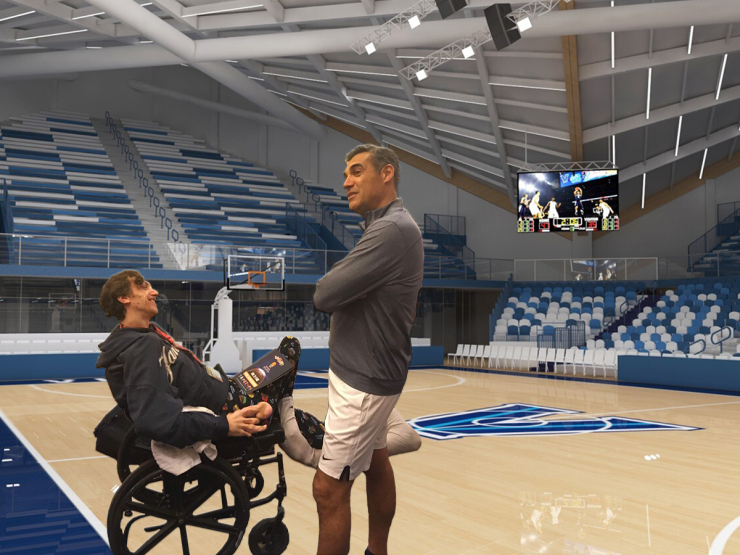 As you can see from his huge grin in the photo above, Daniel is a diehard Villanova basketball fan. Meeting Head Coach Jay Wright and members of the national championship team was probably the best moment in his 26 years of life so far. 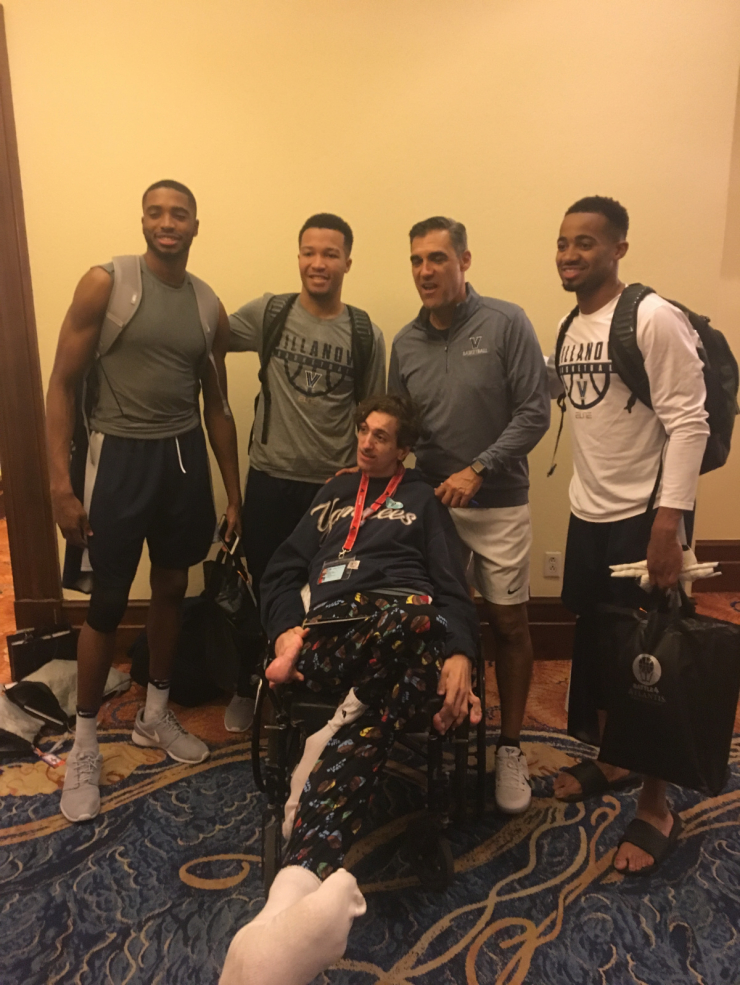 Coming in at a close second would be the time he met Derek Jeter and Michael Jordan on the same day and in the same room. What’s an avid Yankees fan supposed to do when all he has with him is a basketball? Bypass MJ and get the signature from Jeter, of course. You can’t fault the guy for his allegiances. It was a one-in-a-million moment. 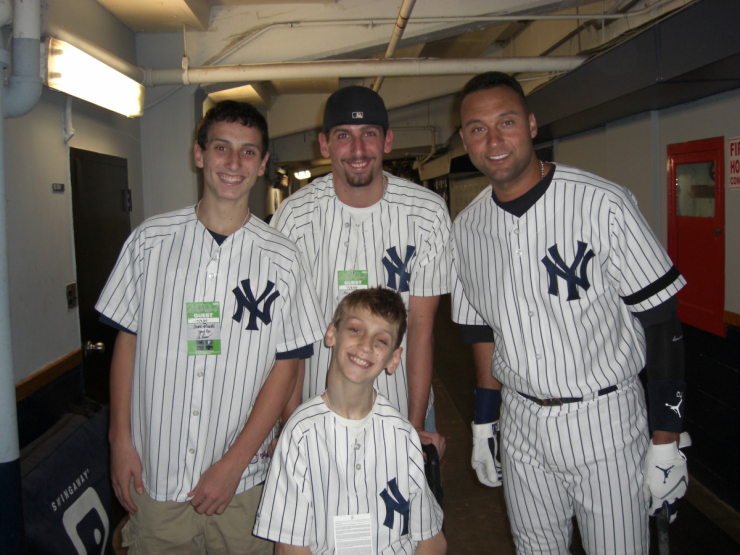 That’s fitting because Daniel is a one-in-a-million guy.

Throughout the first few years of his life, doctors misdiagnosed Daniel with various medical conditions including Beckwith-Wiedemann syndrome and Klippel-Trénaunay syndrome. It wasn’t until 1998, at the age of 5, that Daniel’s family received the correct diagnosis: Proteus Syndrome.

Organs and tissues affected by the disease grow out of proportion to the rest of the body, and with an incidence of less than 1 in a million people, it’s extremely rare. As we said, he’s a one-in-a-million guy. 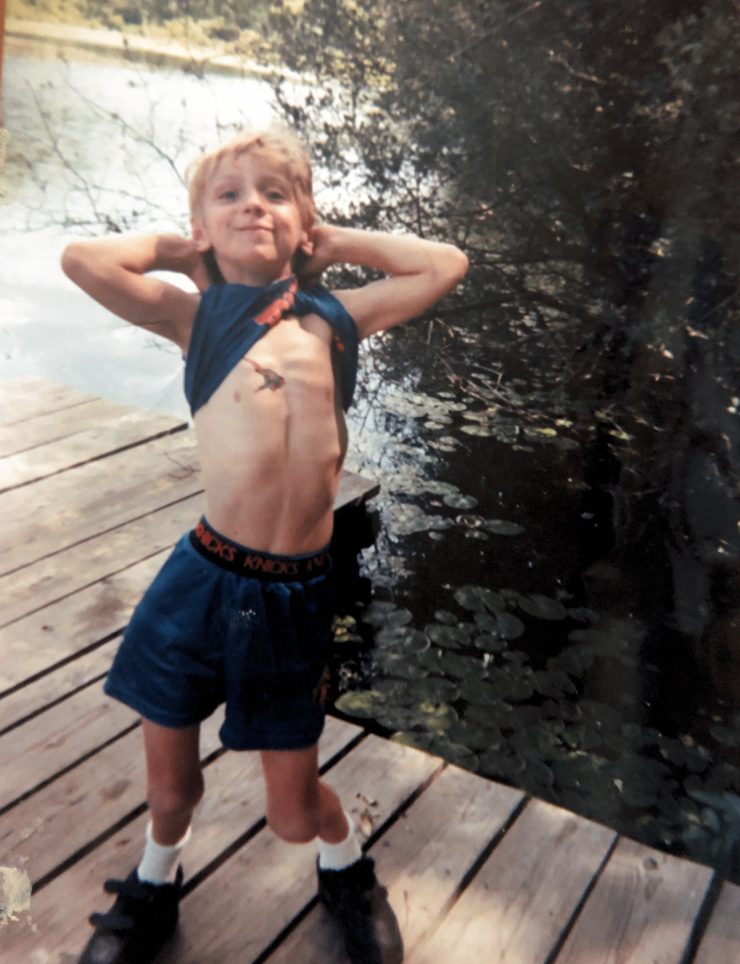 Unfortunately, a diagnosis wasn’t the end of the journey for the Rinaldi family. The next 13 years were dominated by 27 surgeries on Daniel’s body. His disease also made him prone to infections, and after a difficult surgery to remove his knee cap - at the time, the size of a watermelon - he was sidelined by a particularly severe infection in 2003. It was challenging for a bright and curious grade-schooler to miss months of class, but he pushed on.

As Daniel says, “When I put my mind to something, I get it done.”

Through it all, he had the support of three older brothers. At the time of his diagnosis, they were 8, 10, and 12 years old, and his parents had their hands full managing a house full of rambunctious boys. 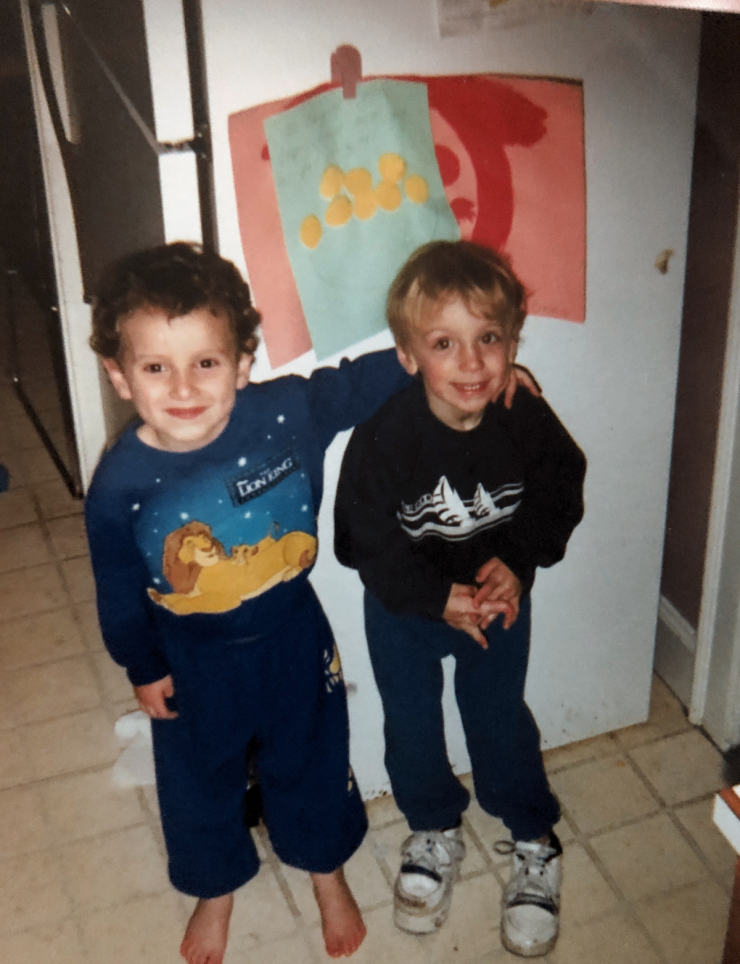 Daniel and his brother Dennis were particularly close. Throughout their childhood, they shared a room together, and Daniel would serve as Dennis’s alarm clock, letting him know it was time for school. Dennis did his part by helping Daniel get into his wheelchair and on the bus.

Oftentimes, the bus was late, and it was a constant source of angst for the poor kid just trying to get to school on time. Unpredictable transportation would become a running theme in Daniel’s life - but we’ll get to that later.

Although he was fighting numerous battles, Daniel was a lot like other kids in one very specific way: he was extremely active. Yes, he had difficulty navigating his way around sometimes. And yes, depending on others to transport him from one place to another could be frustrating. It’s just that Daniel didn’t let that be an excuse to stay inside all the time. 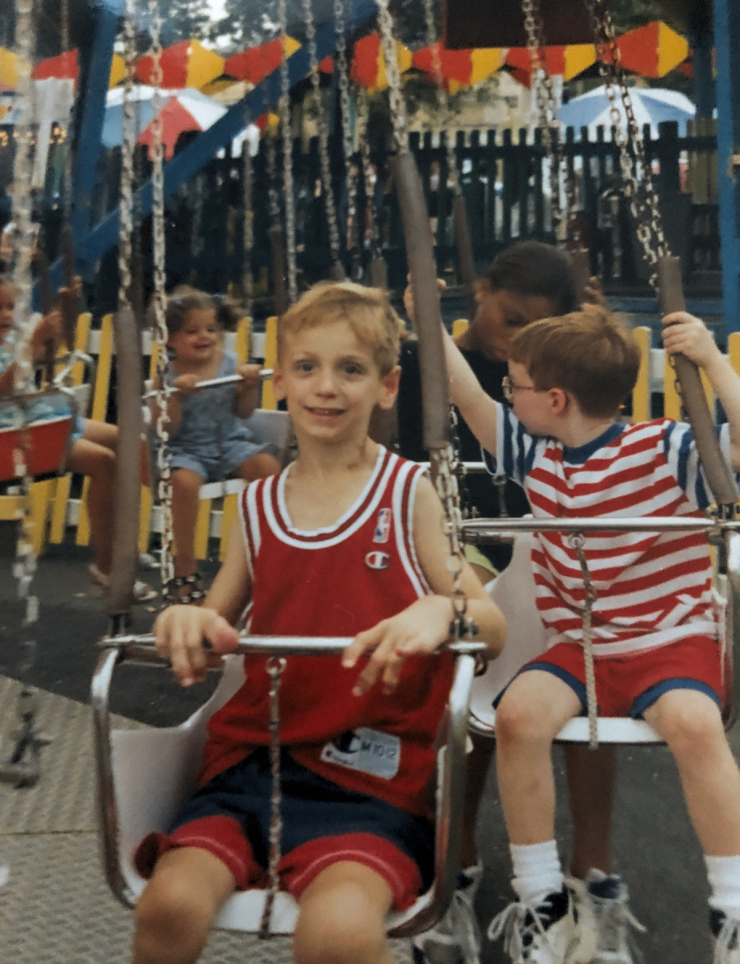 As a kid, Daniel attended The Hole in the Wall Gang Camp in Ashford, Connecticut. Founded by Paul Newman, the camp is designed for children with life-threatening and serious illnesses. 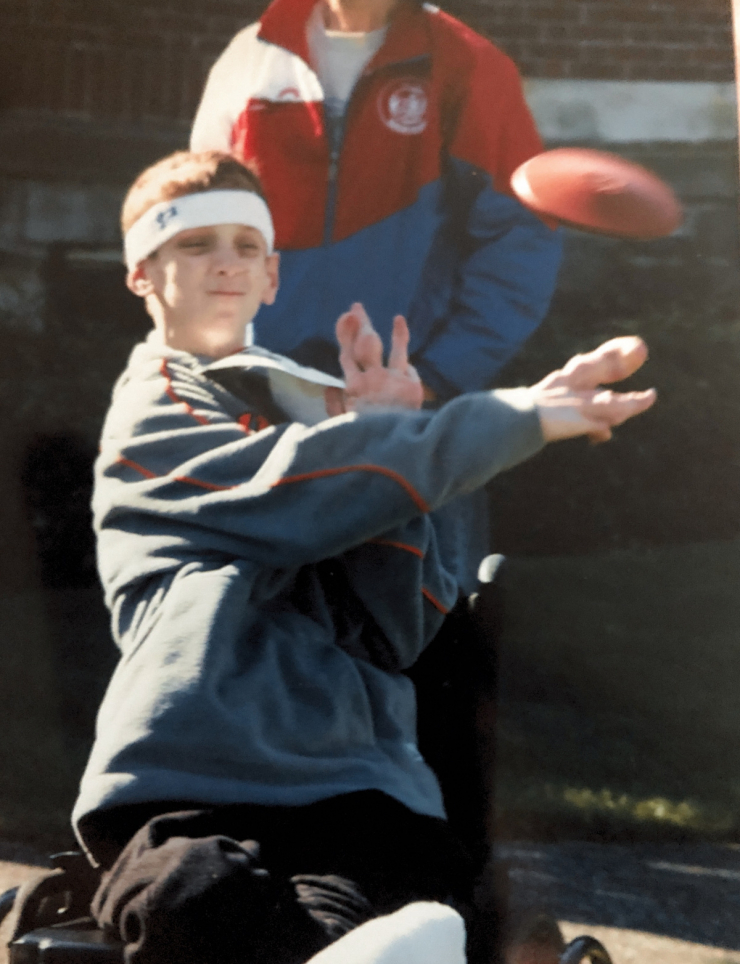 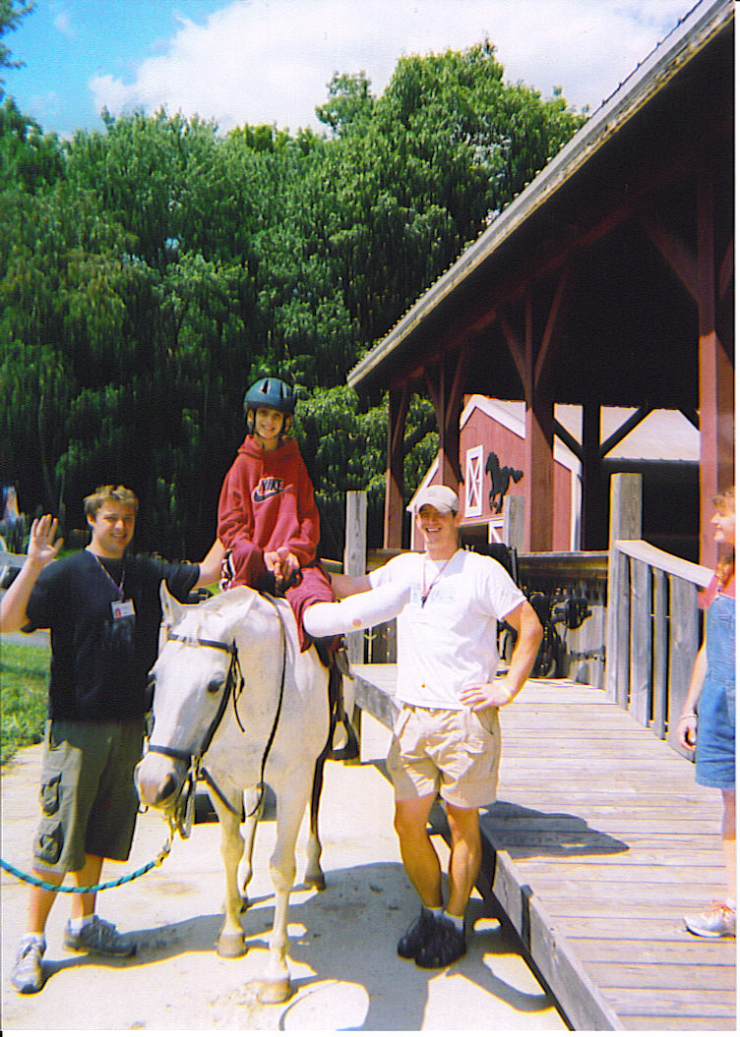 And, of course, hung out with his older brother, Dennis: 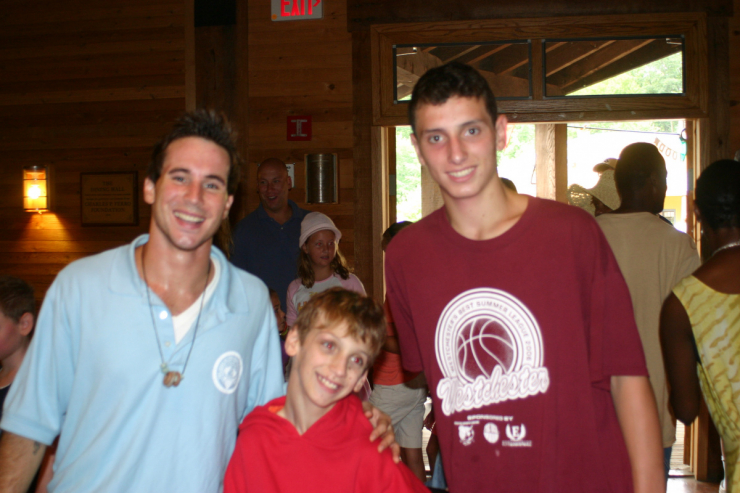 Later, Daniel would volunteer as part of The Hole in the Wall Gang staff, helping other children with stories similar to his. Amazingly, his brother Dennis stayed involved, too. To this day, he serves as the organization’s program coordinator.

Daniel’s can-do attitude has helped him out a lot in life. He wanted to walk across the stage to receive his high school diploma, so he spent countless hours training and working hard to get it done. He repeated that feat again after graduating from college. As he said, when he puts his mind to something, he gets it done. 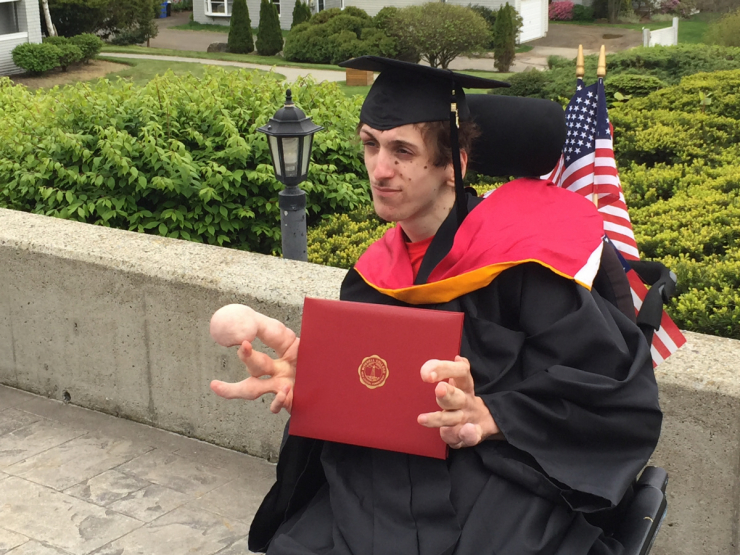 And right now, he has his sights set on getting a driver’s license.

A few years ago, Daniel moved in with his brother Dennis and his future sister-in-law Colleen. Daniel does the laundry, is learning how to cook, and spends most days riding his motorized wheelchair around the neighborhood. 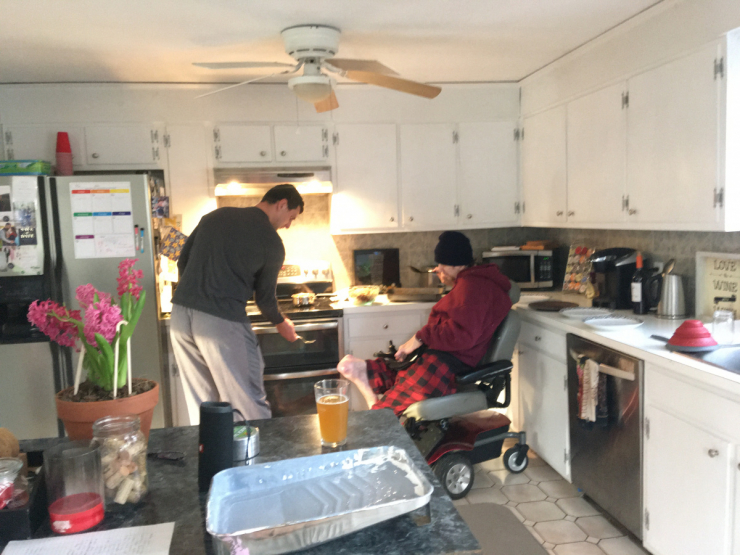 And Dennis is the sole transportation provider (though we’re sure he helps with laundry and dinner every now and then, too). Things could have continued this way for a while. It’s just that their old vehicle needed costly repairs and was no longer reliable. Plus, you have the Daniel factor. Many of his goals revolve around having his license - he hopes to volunteer in the community, find a job, and become more independent. He wants his driver’s license and you better believe he’s going to get it.

He doesn’t need our help with that. What he does need is a reliable set of wheels, and that just so happens to be a specialty of ours. 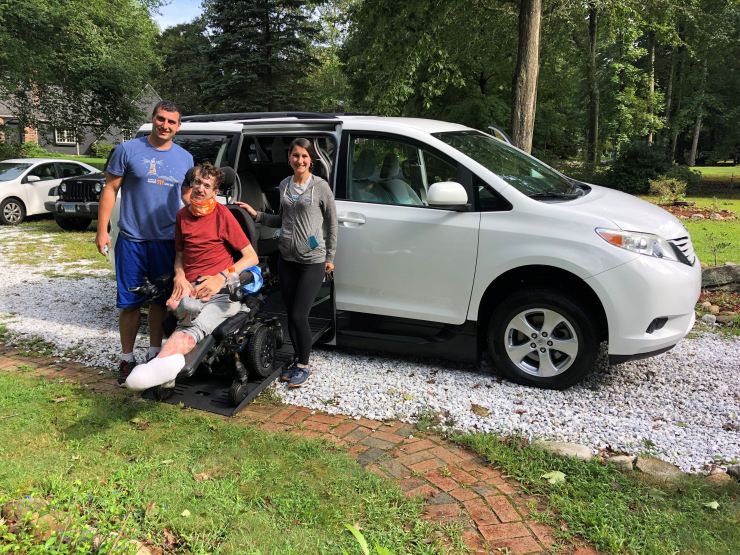 If this grant for Daniel was a last second buzzer-beater, it would be nothing but net. Thanks to the teamwork of our incredible donors and partners at AMS Vans, we’re able to provide Daniel with a wheelchair-accessible van and power wheelchair docking unit for a total impact of $49,009.99.

“I never thought this could happen,” Daniel said. “To all of the Chive Charities donors, thank you for your generosity and support to help me become a more independent 26-year-old.”

If we’ve learned anything about Daniel, it’s that he will get his driver’s license one day. His disease isn’t just 1 in a million, he is too. And now, he has an entire community cheering him on along the way. 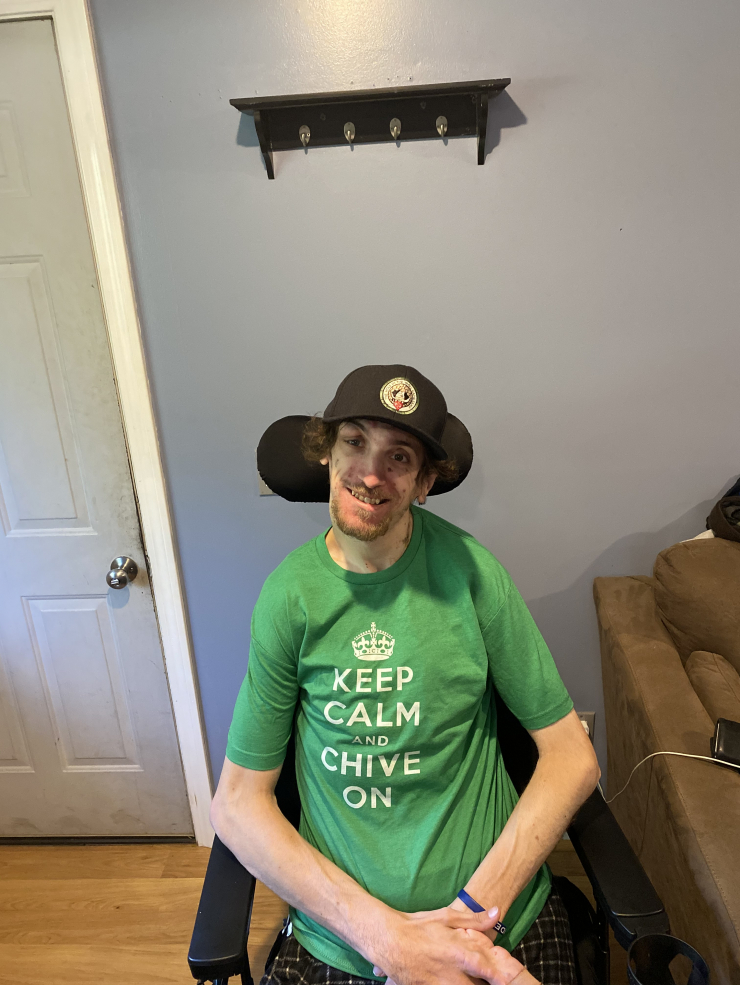 Do you want to help us score more for the underdogs? Like the best teams, we’re only strong when we work together. You can get into the game and help us win big. DONATE HERE.