Who has two thumbs, a rare condition, and one awesome mom? This Kai.

Can the biggest surprise of your life also be the biggest blessing? We know one woman in Louisiana who would answer with a resounding yes.

Danielle is the proud mother of a very special toddler named Kai. She’ll be quick to tell you that his personality shines when he gets his favorite head rubs, massages, baths, and quality alone time. That doesn’t mean he won’t make his opinion known when he’s less than enthused, though. She lovingly refers to him as her “sour patch kid,” and it’s an apt reference to their story, one filled with the highest of highs and lowest of lows. First it’s sour, then it’s sweet. A sour patch kid story, for sure.

Nearly three years ago, Danielle was nearing the end of what she thought was a typical, healthy pregnancy. Due to a heart condition, she visited a high-risk obstetrician to ensure the baby was doing well and growing normally. Each visit was met with a sigh of relief when no abnormalities were discovered. It wasn’t until her final month of pregnancy that the news became more concerning. Between her 36th- and 37th-week checkup, Danielle doubled in size, accumulating extra amniotic fluid. Still, there was no indication of a serious issue, and she went into labor on her own not long after. 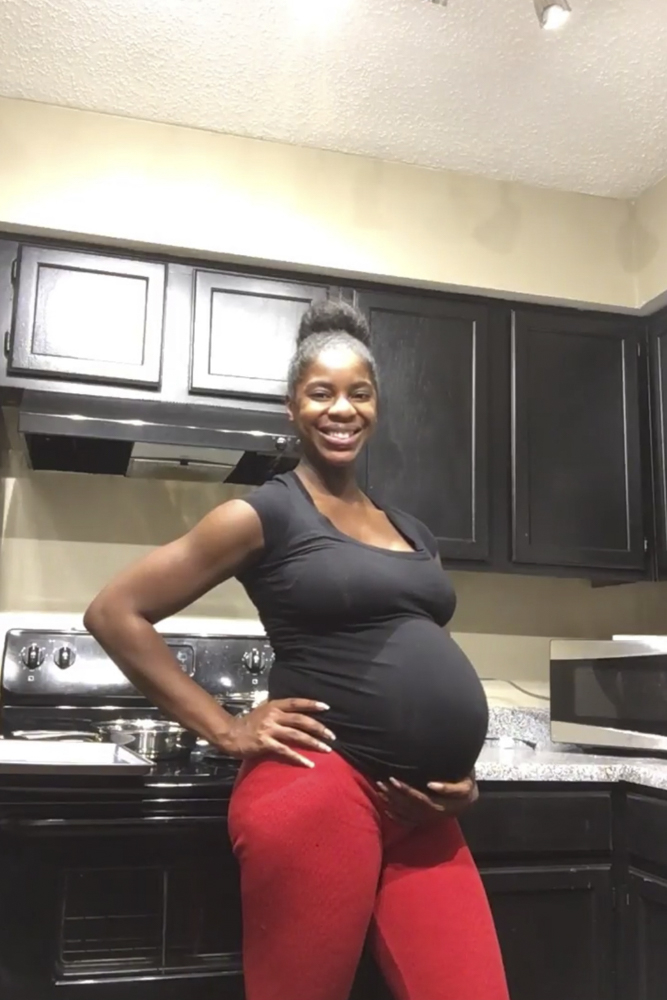 Unfortunately, things quickly took a turn for the worse. The baby’s heart rate was falling at an alarming rate, and Danielle was rushed into emergency surgery. As if that wasn’t frightening enough, the baby wasn’t breathing and needed to be intubated immediately after his birth. But despite it all, Kai James was here.

For the next 40 days, Kai was in the NICU and Danielle was searching for answers. She later learned that while he had brain function, it wasn’t what they would expect to see from a healthy child. She even heard that she might not be able to take him home. 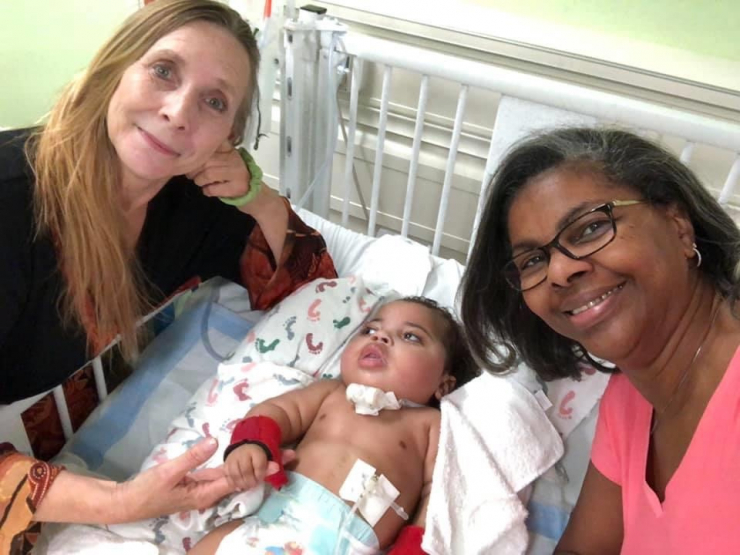 During his extended hospital stay, doctors discovered that Kai’s vocal cords were paralyzed, eventually leading to the need for a tracheotomy and G-tube. It was a tough journey for someone so new to the world, but Kai’s spunky personality shone through even in those early days. They went home not long after, happy to have each other but still without any definitive answers. 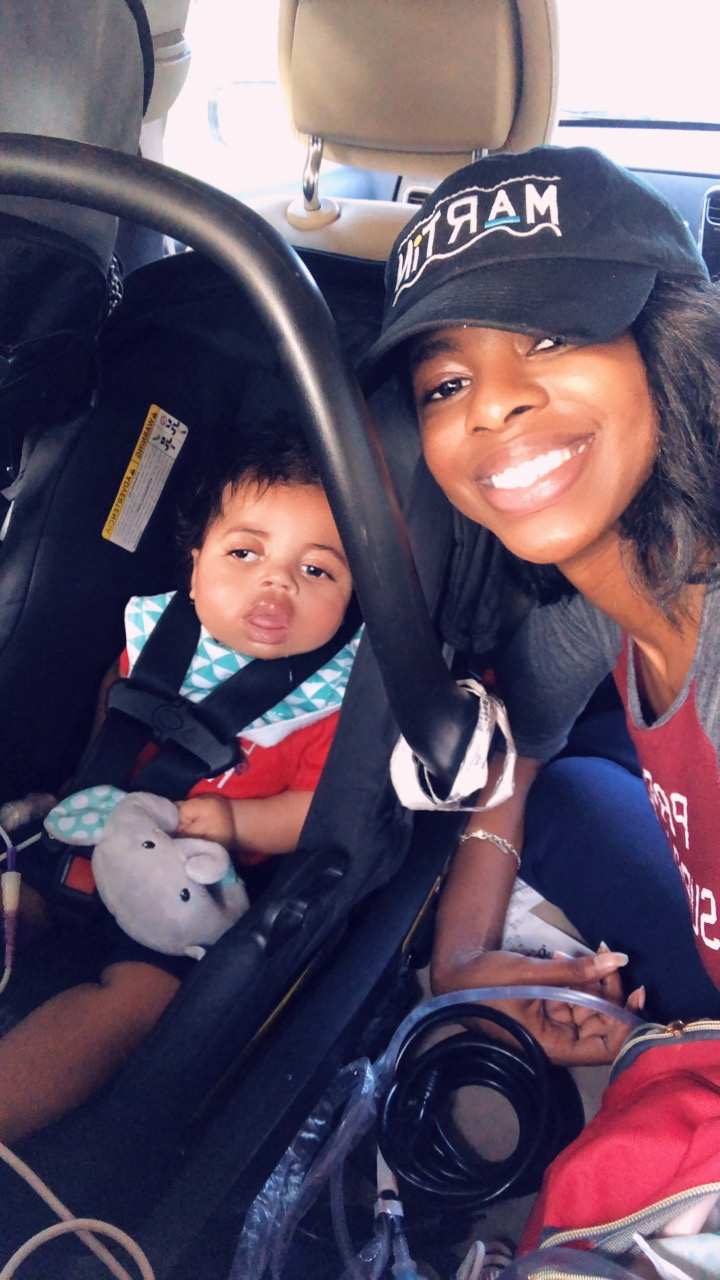 As quick as Danielle will say that she’s lucky to have Kai, he’s even luckier to have her. A former EMT and veteran of the United States Air Force, Danielle is a fast-acting problem solver at heart and she had her full attention on Kai and his unnamed condition. Again and again, Danielle was Kai’s biggest advocate, demanding answers and seeking medical advice until doctors agreed to run genetic testing. Can you imagine that? When she should have been planning his first birthday and celebrating milestones with him, Danielle was being a voice for the voiceless. It would take nearly a full year and numerous tests, biopsies, and procedures to finally learn the truth.

Kai was diagnosed with a rare medical condition called Beta-propeller protein-associated neurodegeneration disorder (BPAN), a progressive disease that damages the nervous system, and there is no cure. 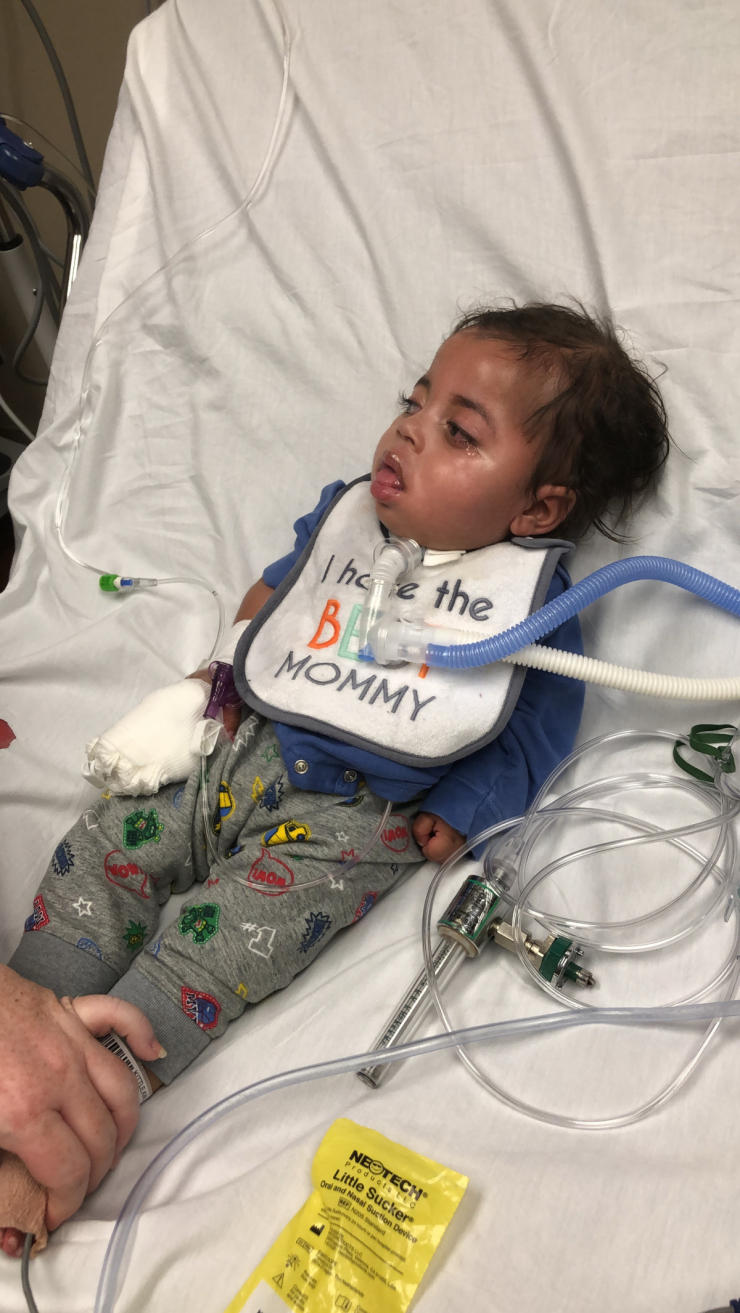 Since learning of his disorder, Danielle and Kai have moved forward the best they can, taking each challenge as it comes and focusing on the here and now. They’ve had good stretches where Kai’s care was managed with routine doctor visits, and they’ve also had days so dark and overwhelming that it’d be difficult for anyone else to comprehend. Last year was a lot like that.

From January through July, Kai was hospitalized 10 times with everything from pneumonia and tracheostomy infections to gastric problems and apneic episodes. “Each time it took longer for him to get well,” Danielle said. “Eventually, he was placed on a ventilator to assist with breathing 24 hours a day, 7 days a week.” 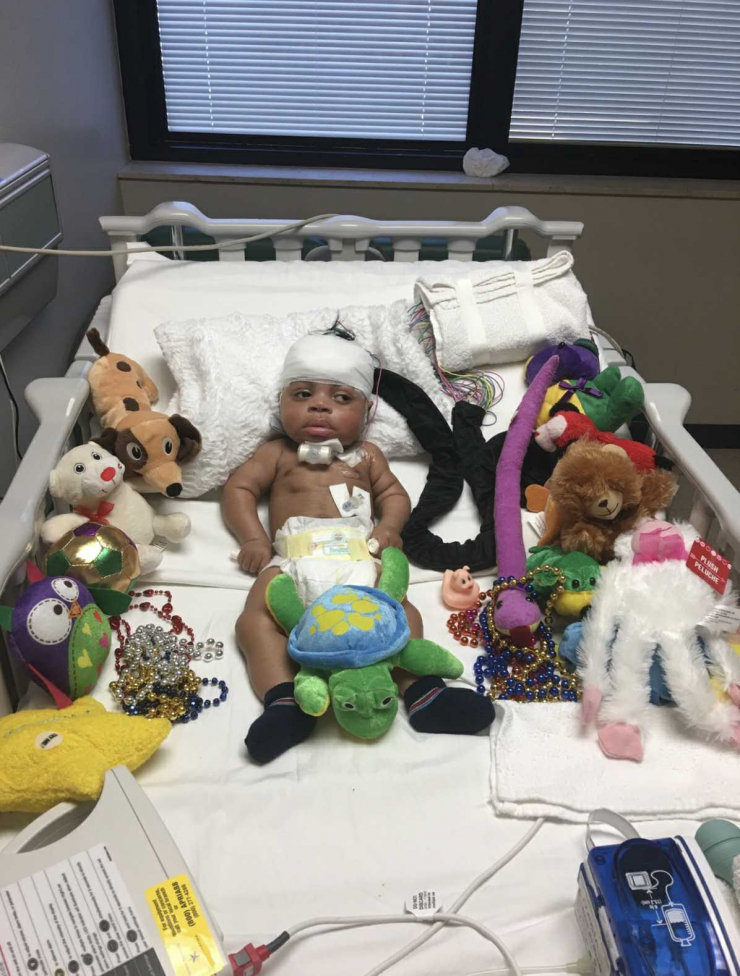 As Kai’s medical needs became more extensive and unpredictable, Danielle ended her 11-year military career to manage his round-the-clock care. She also happens to be a full-time nursing student now and has her sights set on opening a respite care center to help other families with children like Kai. We told you they were lucky to have each other, right? 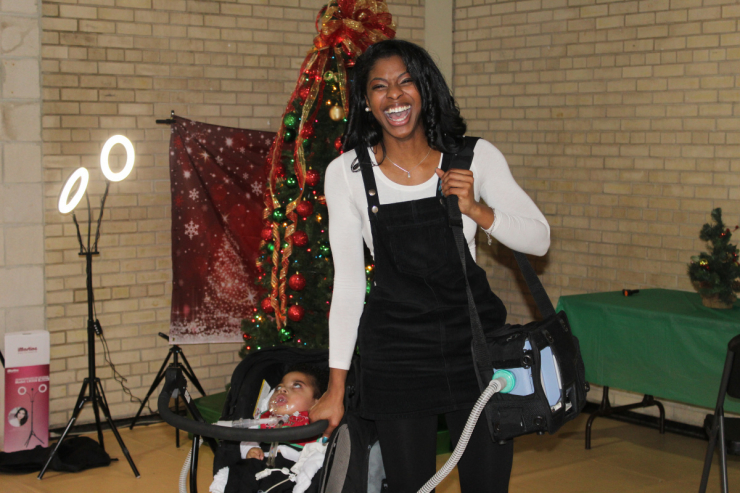 Like always, Danielle has Kai’s needs at the forefront, so when she saw some areas of improvement, she put her natural problem-solving skills to work - and she reached out to Chive Charities donors for help. While Kai is non-verbal and non-mobile, he’s still a growing boy with a big personality. Since his condition causes muscle spasticity, it’s challenging to sit him in traditional toddler chairs. He also needs a medical bed that can easily adjust to fit his equipment and necessary supplies. That’s two seemingly insignificant items that could bring a sense of normalcy to their lives. Two items that Danielle knows would make his life that much easier - and happier.

“The bed and floor seat is going to be so beneficial to Kai’s care,” Danielle said. “We’ve still been using his crib, but the bed will be more comfortable for Kai and less strenuous on my back. As for the floor seat, that will allow Kai to be integrated socially. He outgrew his previous seat, so he has to stay in bed more often than we would like. This will help him with positioning and allow him to sit upright, both safely and comfortably.” 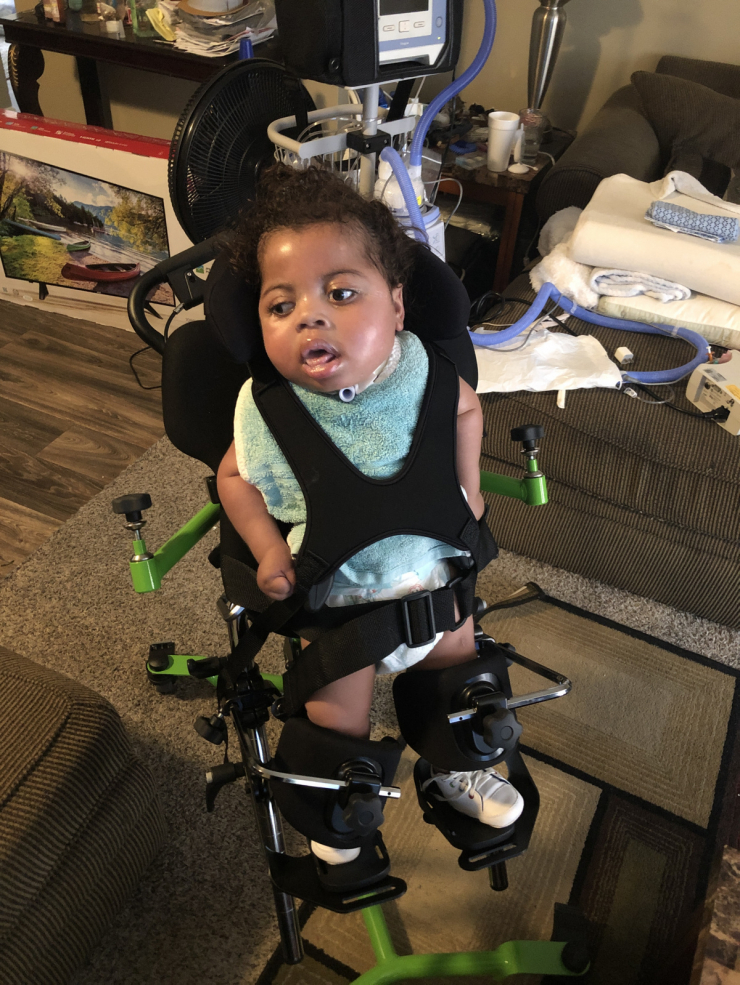 This leads us to the grant item that could have an even bigger impact, a new wheelchair-accessible van. Danielle and Kai’s vehicle is no longer operational. That’s bad news in the most typical of cases, let alone one as complex as theirs. After disassembling his wheelchair and loading all of his medical equipment, there was just enough room for the two of them. Think about loading a toddler and a wheelchair and medical supplies and a thousand other necessary things into a 4-door car. Now think about doing that every day - even multiple times a day - entirely by yourself.

“The van came right on time! Being without a working vehicle proved to be more problematic than I originally thought,” Danielle said. “Especially since during that time, we had an emergency, a hospital stay, and follow-up visits. I was overwhelmed with finding so many different modes of transportation and couldn’t help but feel like I was imposing on friends and family. The van is probably the biggest relief we have had to date.” 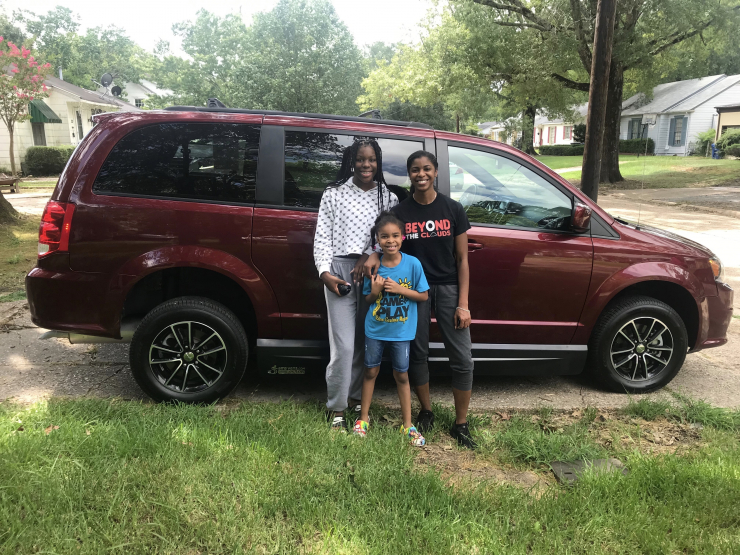 Because of you and your generosity, Danielle and Kai will receive all three items they desperately need, and all three items that will make their lives that much happier: a floor sitter and medical bed from Numotion and a wheelchair accessible van from our friends and partners at AMS Vans. In total, the impact is a staggering $49,406.17.

“It’s a privilege to serve customers like Kai and his mother, Danielle,” said Mike Callahan, Regional Vice President at Numotion. “We are grateful to partner with an organization like Chive Charities to fill this need for a very deserving family. At Numotion, we strive each day to positively impact the customers we serve. We are humbled to work with amazing families, like Kai and Danielle, who have such strength and determination.”

When Danielle shared Kai’s story with us, she included a quote from Mandy Hale that read, “There is nothing more beautiful than someone who goes out of their way to make life beautiful for others.” We couldn’t describe her better ourselves. 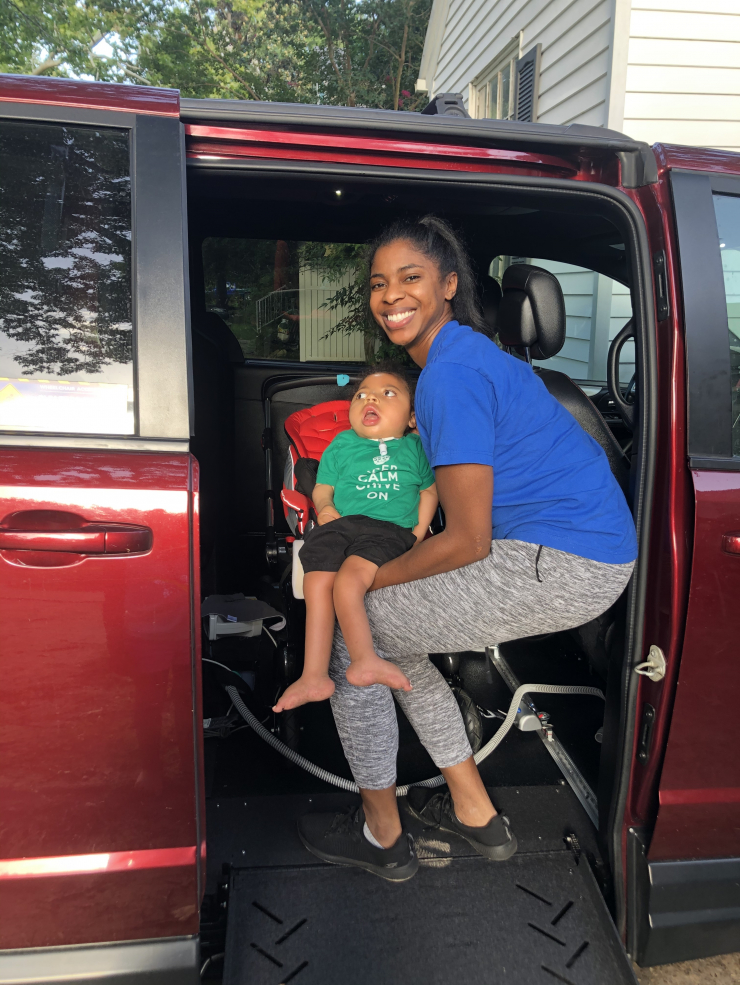 Let’s take a page from Danielle’s book about creating a beautiful life for others and make the world 10% happier today. You can join us in our mission by signing up as a monthly donor. The gift of recurring donations allows us to meet recipients’ needs today, while also planning for tomorrow. After all, you never know what a new day could bring. DONATE HERE.