The greatest love of all

A few months ago, the Chive Charities team sat around the conference table at HQ reviewing the latest grant applications. 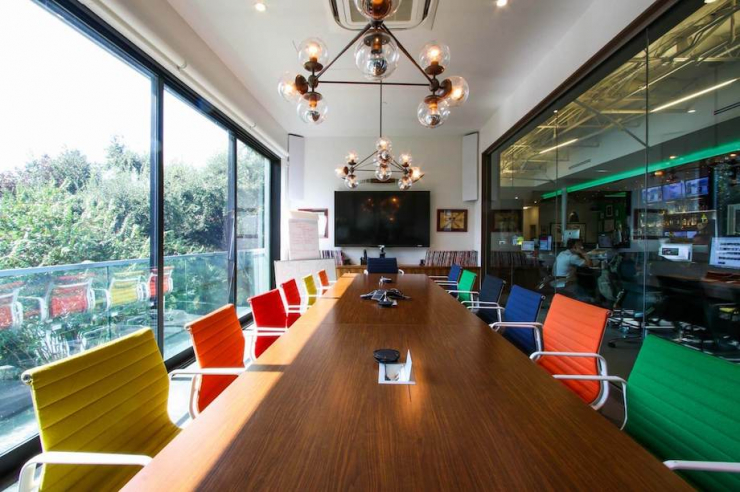 John was there, some of our other board members Skyped in, and our programs director Angie walked us through each case, one by one, so we could make the agonizing decisions on which ones we could approve. I know I’ve talked about it before…it’s both the best and worst day we have each quarter.

BTW, we can say YES to a lot more incredibly deserving applicants if all of y’all would sign up for a small monthly donation to Chive Charities. Just sayin’…

Anyway. We’re sitting in the room going over grant applications and we get to Bobbi. Angie pulls her picture up on the big screen and starts to read. 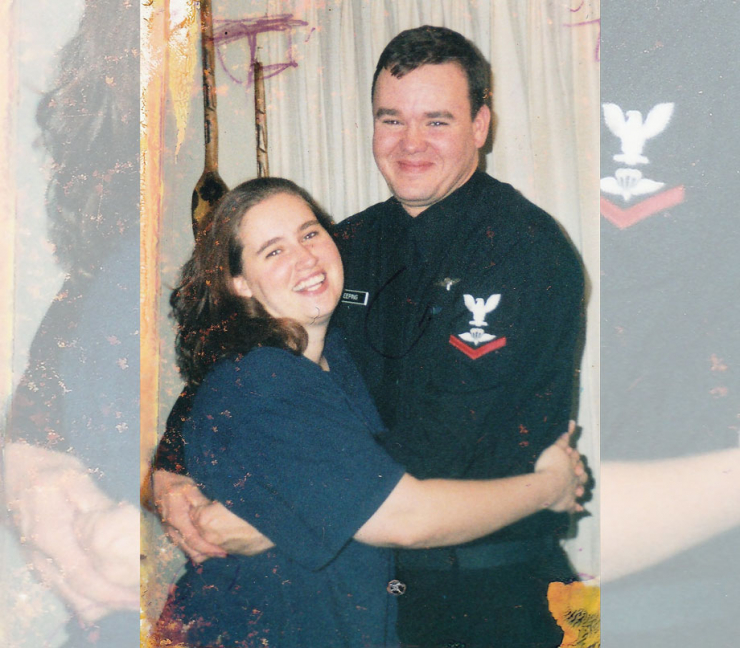 “This is Bobbi and her husband Mark. Mark is retired Navy, he’s been a police officer for 18 years. Bobbi worked in hotel management. Married 23 years, two teenage kids, live a little outside San Antonio.” 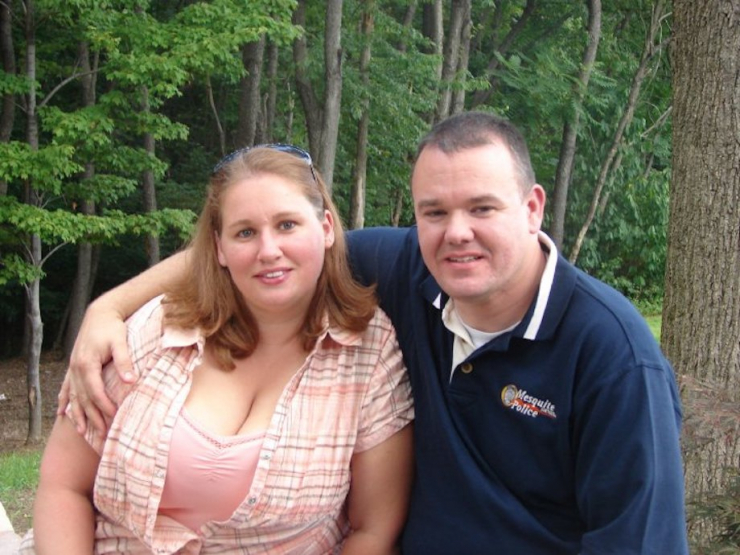 Angie paused, which is unusual because these meetings are always rough, and Angie’s seen a lot. We waited for her to continue.

“This past April, Bobbi started feeling very weak and had problems walking short distances,” Angie read. It was a letter from Mark. “She was in so much pain in her lower back and in her right hip, and she often felt out of breath. On May 3rd, Bobbi’s condition was worse, so she met with her family doctor. Fifteen days later, they drained 1100cc of fluid from around her heart and lungs, which was later determined to be cancerous. And on Monday, June 1st, at 2:15 p.m., Bobbi and I met with her oncologist, who told us Bobbi had stage IV metastatic breast cancer, and that it had spread to her lower back, right hip and ribs, and lungs.” 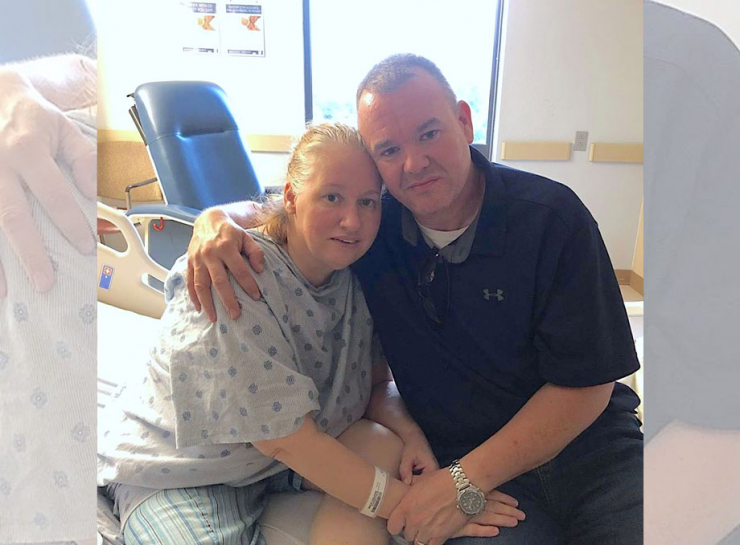 “Bobbi is the most beautiful and perfect woman I’ve ever met,” Mark said in his letter. “For 23 years, she’s been there for me while I was in the military and as I worked long hours as a police officer. In 23 years, we never yelled or screamed at each other, and we always kiss each other before laying our head down on the pillow. Every day, we tell each other ‘I love you.’ And every day, I pray to God to give me her cancer so she can live and be free of pain.”

“What do they need?” John asked, breaking the silence. I looked around the room. Most of us were making the same face Mark is making in that picture – I can only guess it’s a mixture of fear, anger, sadness, and every other thing one feels facing the loss of the person you love most in the world. 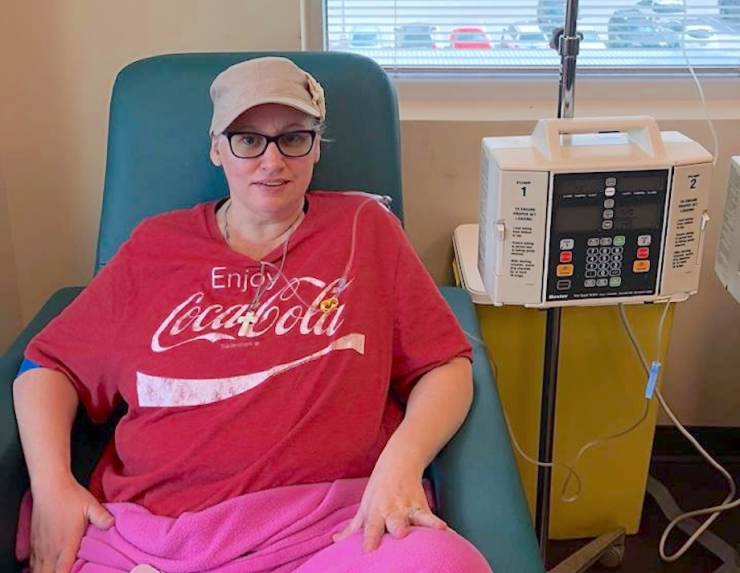 For the past six months, Bobbi has fought for her life. She’s endured months of chemotherapy, multiple procedures to drain fluid from around her heart and lungs, and pain that worsens every day.

Bobbi’s doctor explained her cancer is very aggressive, so much so that her lower back looks like Swiss cheese with all the holes it’s caused. If Bobbi fell, he added, it could paralyze her. So she uses a walker to get around safely, and takes long, hot showers to ease her increasing pain. 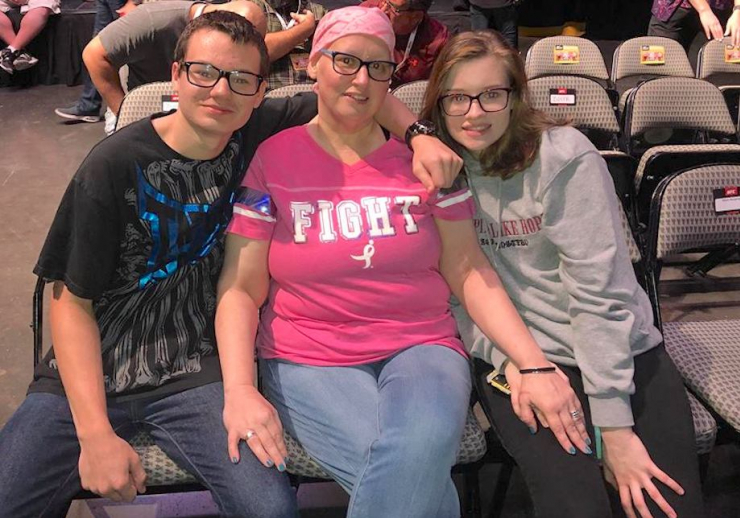 She’s starting a brand new medication her doctor is very optimistic could prevent the cancer from spreading further, and could also reduce the size of her existing tumors. It’s not a cure, but it could give Bobbi a few more years with her family. Which is all the more reason for Chive Charities to make her home as comfortable and safe as possible. 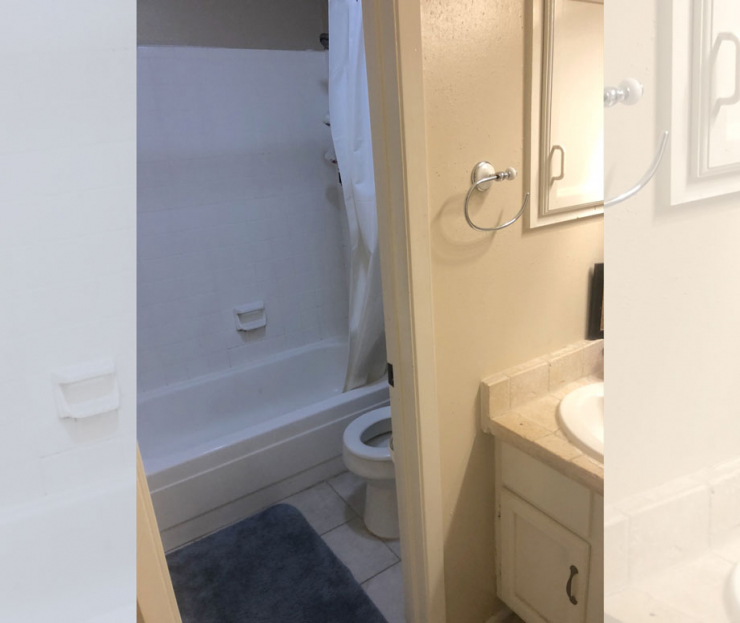 “The biggest need they have is an accessible bathroom,” Angie told us. We looked at pictures of Bobbi and Mark’s current bathroom, at the tub with sides she can barely step over, no rails to hold onto when she feels light-headed, and a vanity too low for Bobbi to bend down and brush her teeth without excruciating pain.

“This is a quality of life thing,” John said. “She deserves a bathroom she can actually use. We have to do this.” 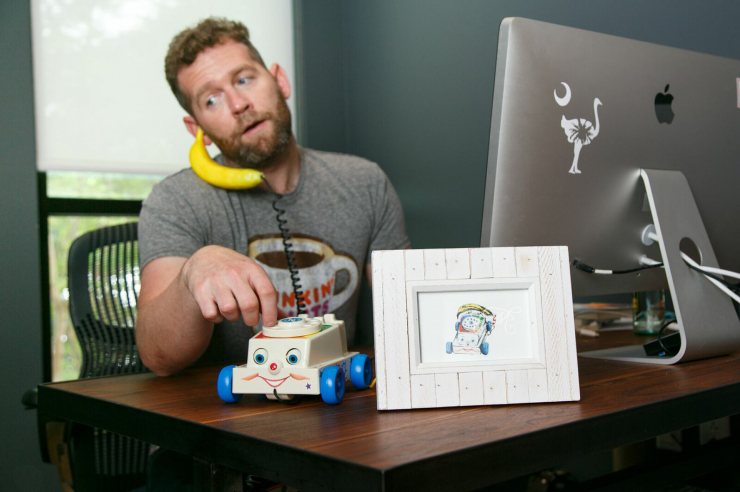 We finished the meeting, wiped our eyes, and John and Angie went to call Bobbi and Mark. We don’t usually call recipients immediately after the meeting to let them know their grant is approved, but this time, it felt like the thing to do. 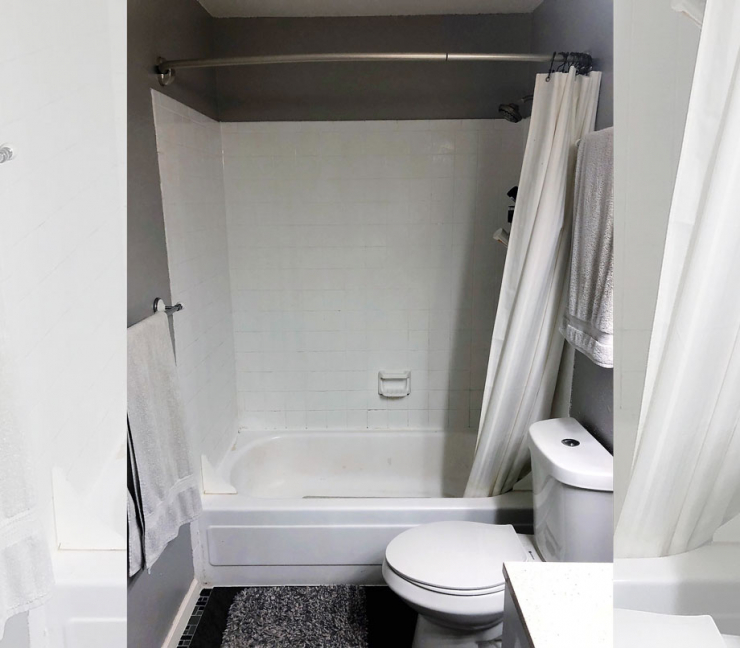 It turns out, between submitting the application and John and Angie’s call, Mark and his kids had already started working on the bathroom. They had replaced the vanities, toilet, mirror, and lights, and installed slip-resistant flooring. All that was left was a walk-in shower, and it was nearly $12,000. We let them know Chive Charities’ monthly donors would be honored to cover the cost of the shower, and we were moving their grant to the front of the queue so Bobbi could start enjoying her new bathroom ASAP. 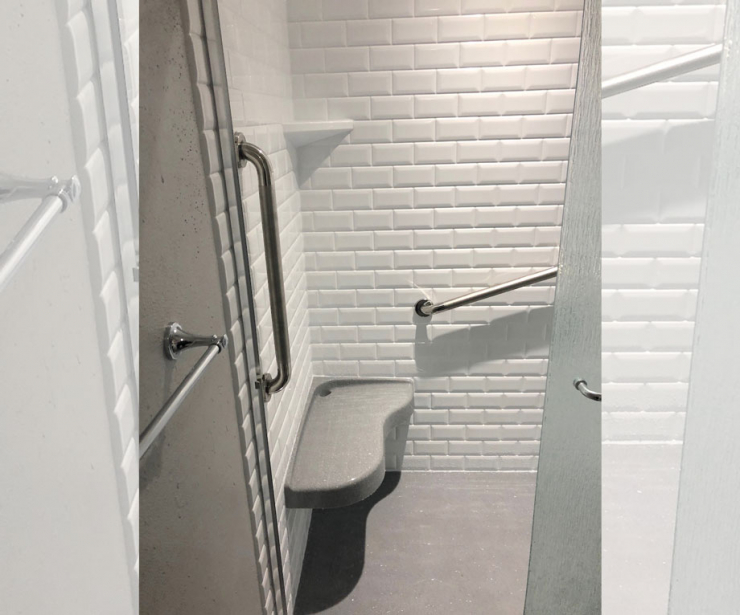 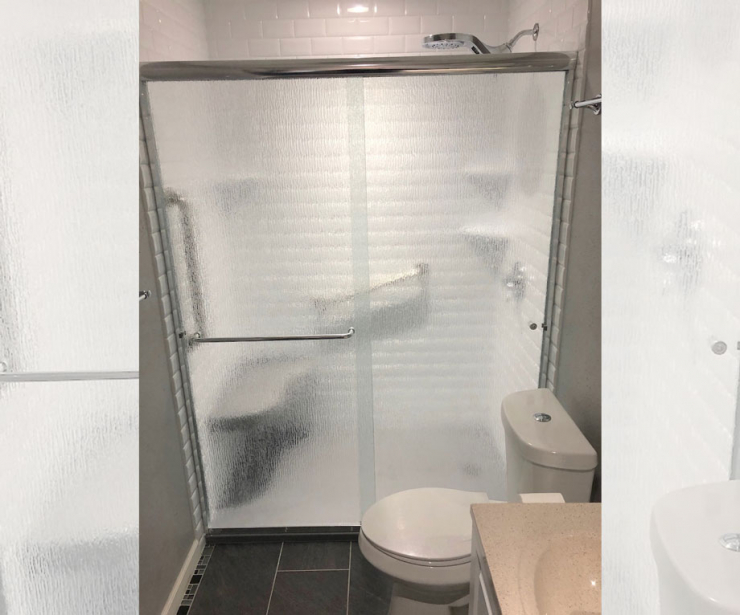 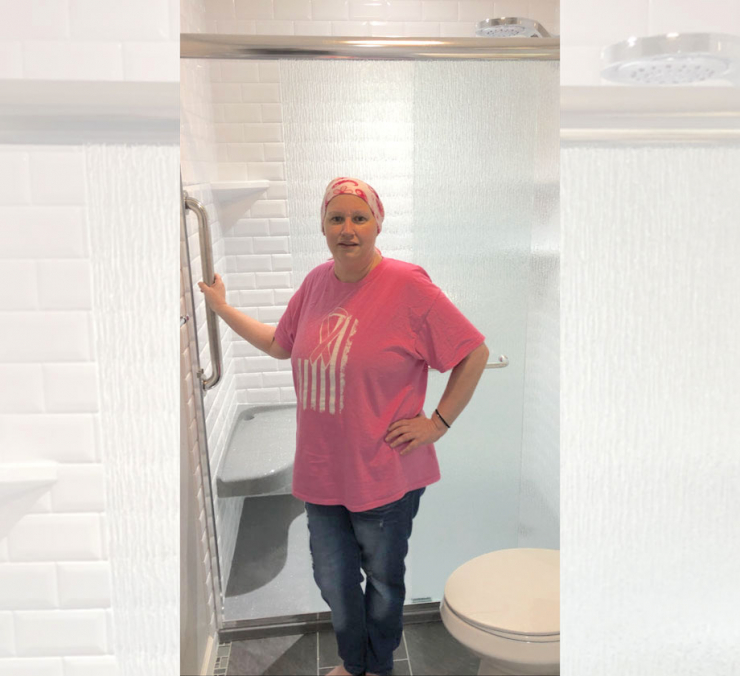 Mark told us that when he shared the good news with Bobbi, she started to cry. “She’s never had anyone do something so meaningful for her, and she is so grateful to Chive Charities for carrying out this random act of kindness.” 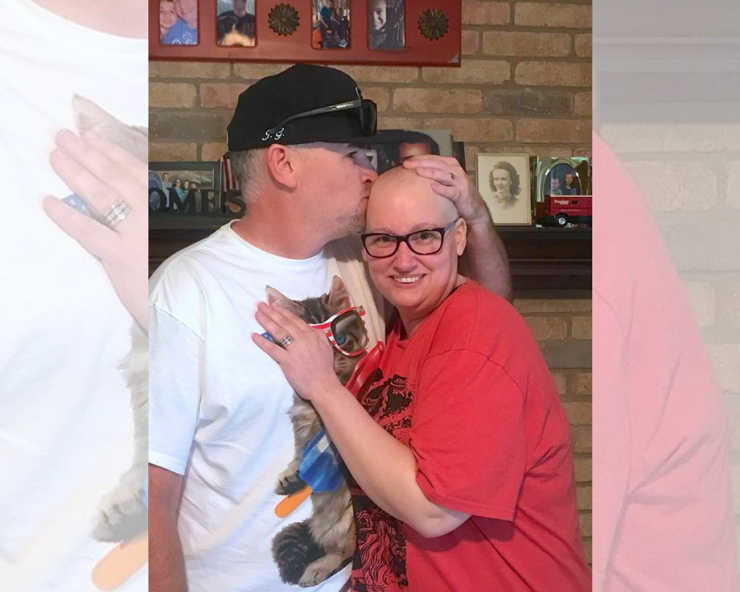 But here’s the thing: Chive Charities’ kindness is never random. We work every day to help families in their greatest time of need, and there are so many more people who need our support. To give more brave warriors like Bobbi the quality of life they deserve, become a Chive Charities monthly donor RIGHT HERE. 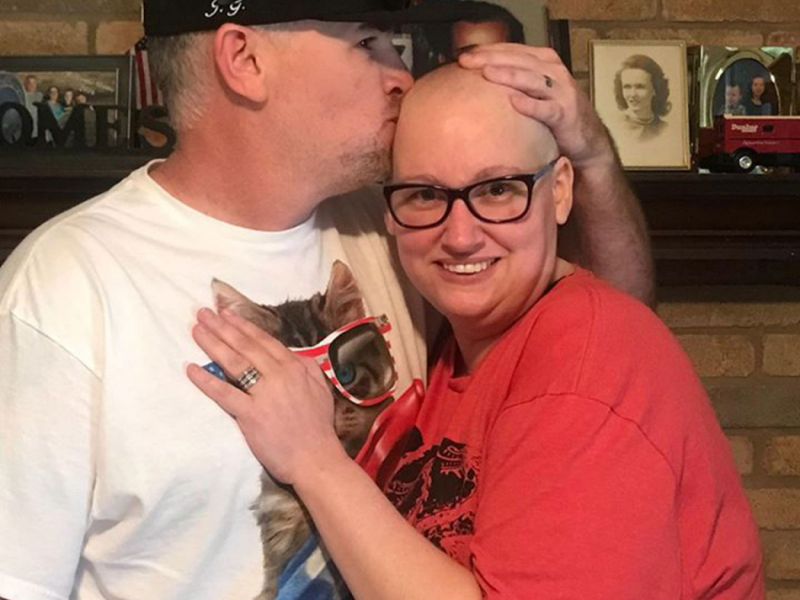 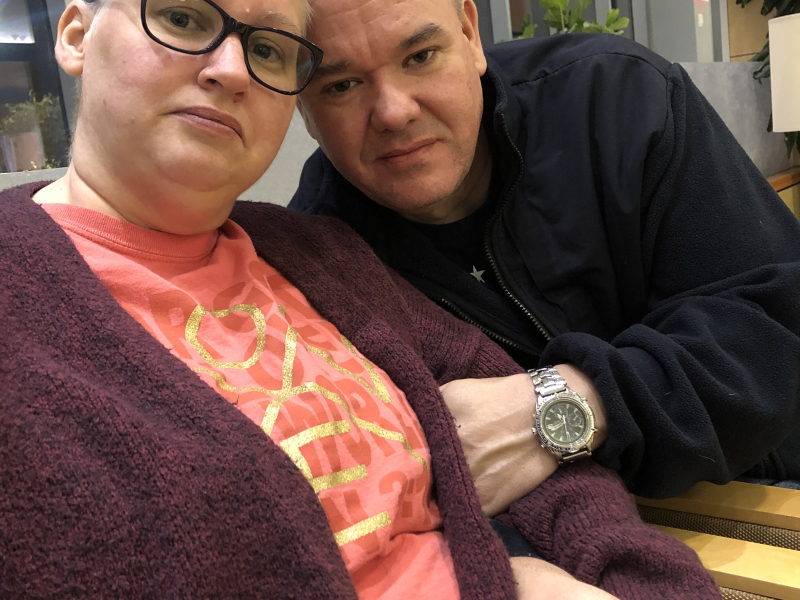