Young warrior receives word that help is on the way

Young warrior receives word that help is on the way

“Gershon woke up and told me he had to go to the bathroom, which was unusual. He went in the bathroom and stood there. Finally he walked back into the doorway and his eyes rolled to the back of his head and a thick liquid fell from the corner of his mouth. He collapsed in my arms. That was the last time I saw Gershon in many ways. By the time Gershon arrived at the hospital, he was already in a coma. The doctors told me they didn’t expect him to make it. I couldn’t believe it.”

Gershon was diagnosed with Arteriovenous Malformation (AVM): AVM affects less than 3,000 people in the US every year. A simple way to understand AVM is this: Arteries are responsible for taking oxygenated blood from the heart to the brain. Veins are responsible for carrying oxygen-depleted blood back to the lungs and heart. AVM is a tangle of abnormal blood vessels in the brain that disrupts this vital process. In Gershon’s case, it creates a massive fluid backup in his lungs and throat, so much so that he is unable to speak.

Gershon spent 5 months in the hospital, one of them in a coma. He endured 4 brain surgeries while comatose and miraculously survived, only to have 3 more brain surgeries after he regained consciousness. At first, all Gershon could do was blink his eyes. Slowly, he regained head movement as well as the ability to raise his arms. With any luck, he may even walk and talk again. Nobody knows. For now, he is wheelchair-bound.

It is often said that God will never give us more than we can handle, but this is pushing it...

Gershon’s 5th grade teacher, Mrs. Dean, visited him in the hospital. After the visit, Carla walked her out of the hospital only to notice that her own car was missing. Carla’s car had been stolen from the hospital. I mean... really? I could go on for days about what kind of amoral individual it takes to go car jacking at a hospital but it doesn’t get you anywhere. You have to work the problem.

That day, 5th grade teacher Mrs. Dean worked the problem. There in the parking lot she told Carla she needed to contact a group called Chive Charities… 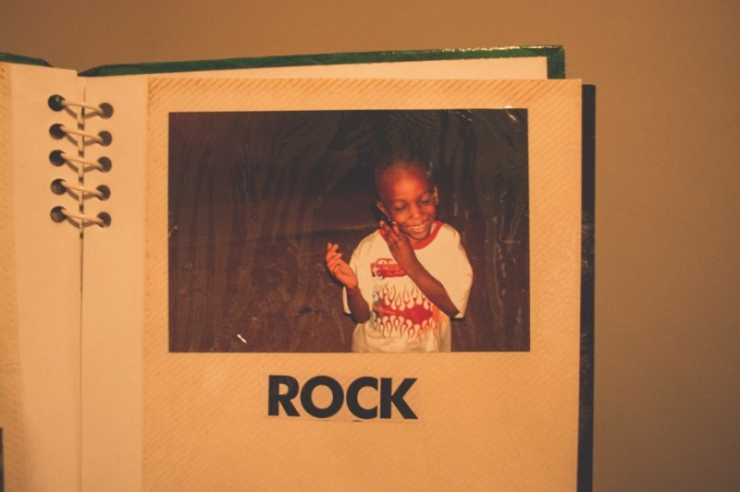 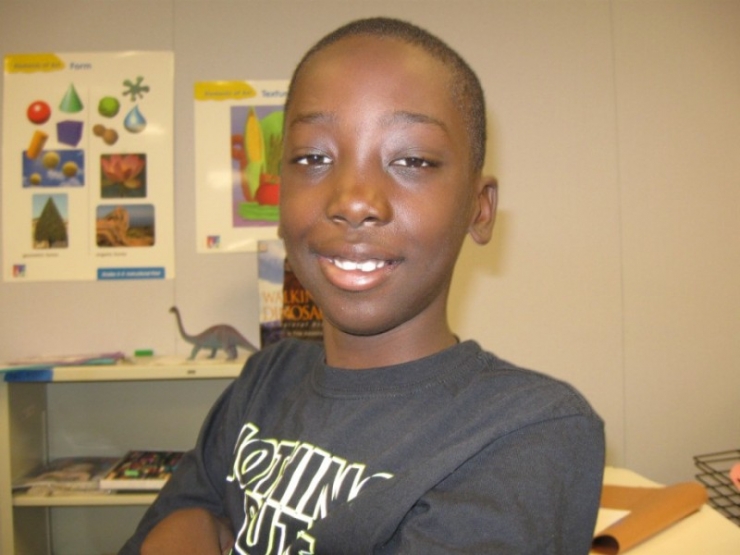 Gershon, age 11. Two months before he slipped into a sudden coma. 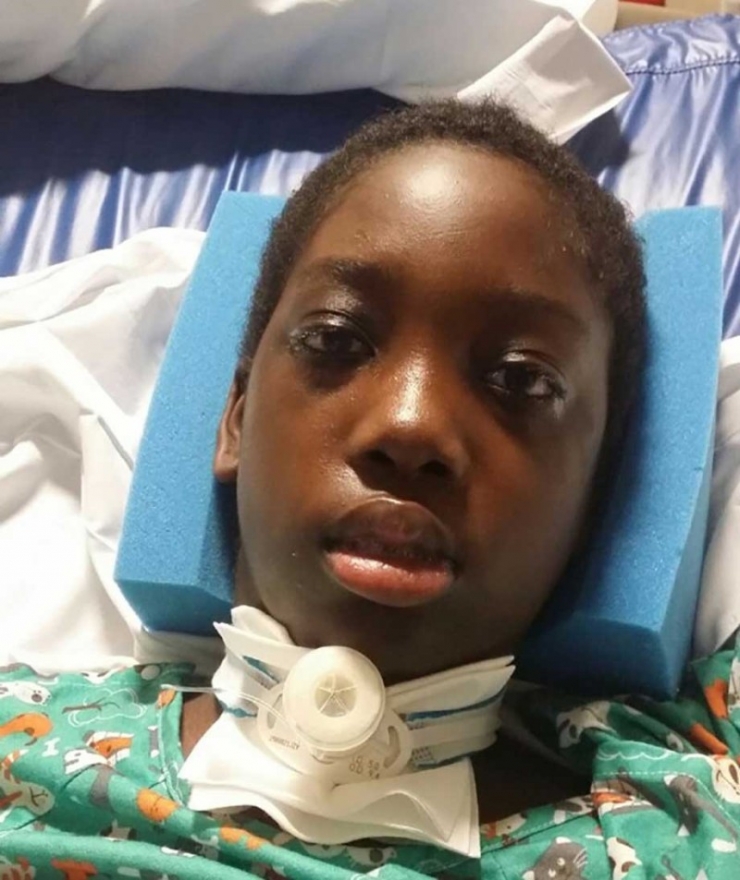 Finally awake. All he could do was blink. Nothing else. 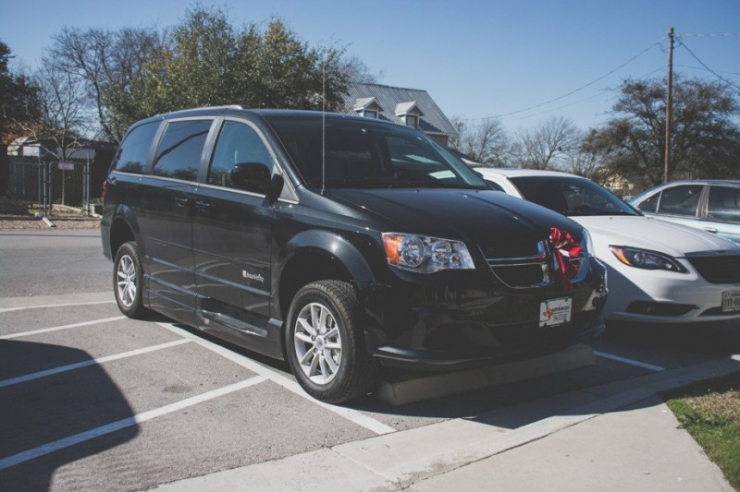 A black wheelchair-accessible 2016 Dodge SXT arrived at the doorstep (with a red bow) courtesy of a $48,000 grant from theCHIVE Fund! Gershon could now get to his doctors appointments without waiting for Medicaid-provided transportation. BraunAbility, our mobility partner, got us the van and then Advanced Mobility RAK’d Gershon a fold-down TV for free so Gershon could watch his favorite movies! The first day Gershon got the van his only request was to go to Toys R’ Us to buy a toy car set for his 5 year-old cousin for Christmas.

And so Gershon got the van he needed so badly and we did our part and this is where our story ends... right? 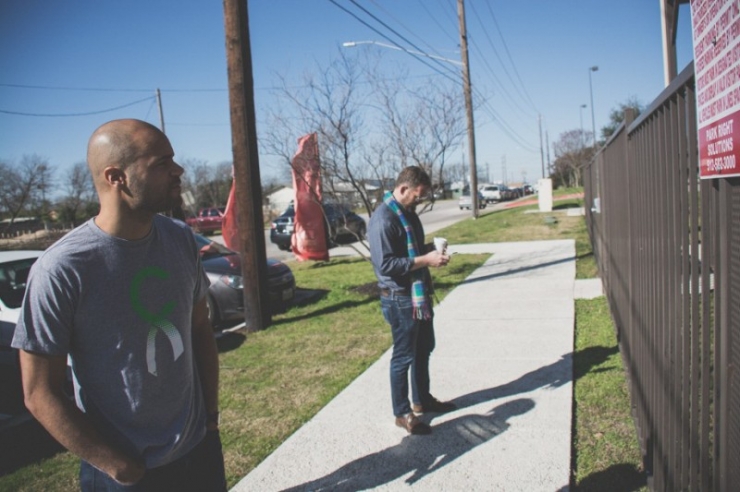 There’s this thing we do with all our Chive Charities recipients I’m really proud of. For lack of a better term, we call it follow through. We stay in touch with all our recipients after their campaign. Angie and Caitlin avail themselves to all recipients anytime, day or night. Shortly after we purchased the van for Gershon, we took a field trip to visit Gershon and his family at their home in North Austin. That follow through would be the catalyst that made us realize our story with Gershon was far from over. 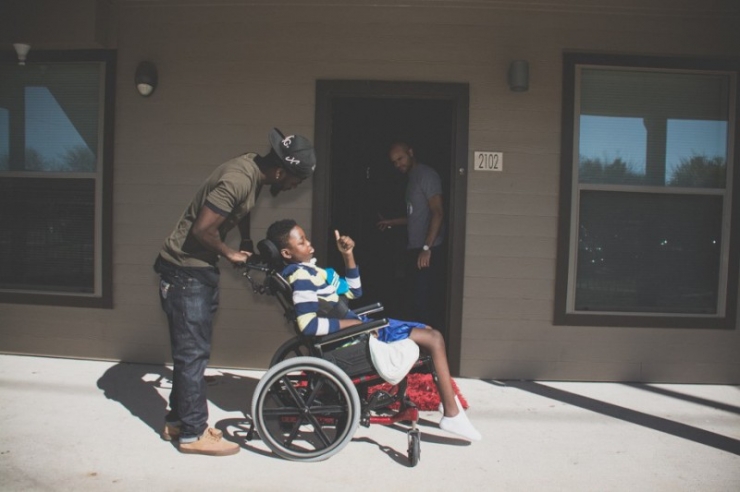 Gershon has three older siblings. His brother Dameon met us at the door. Both Carla and Dameon rarely leave Gershon’s side. They are his ever-present caretakers. 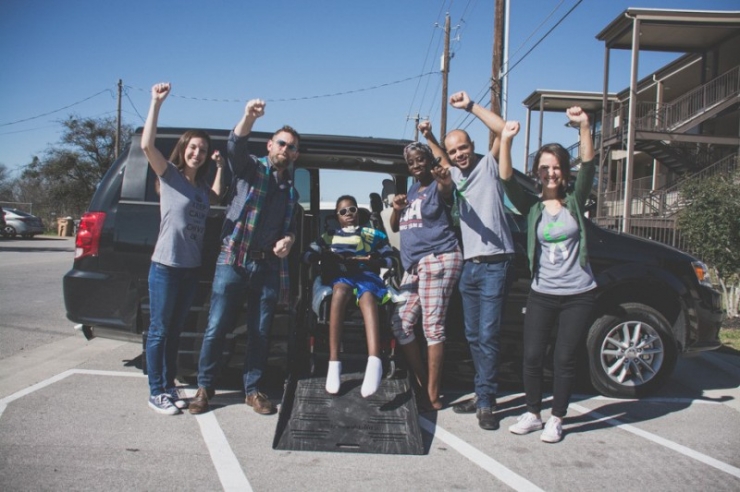 Gershon wanted to show us his new minivan. Complete with automatic side-entry wheelchair ramp, this van has it all. 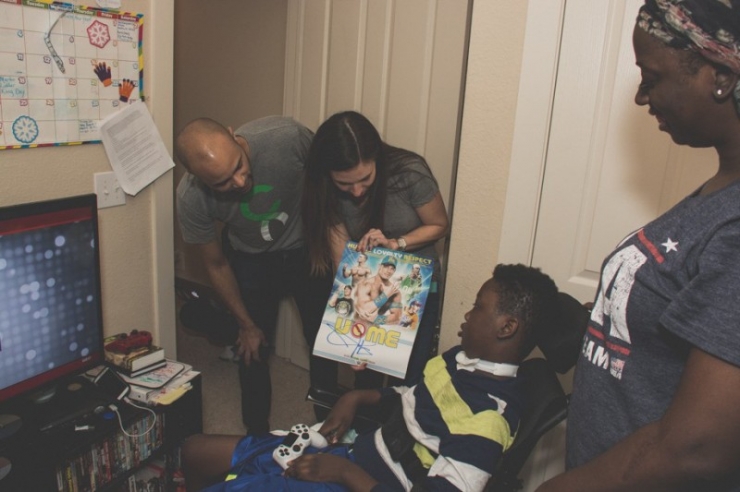 There’s a common John Cena thread running through many of our charity posts. From recipients’ Trey McDonald to Justin Fitch and now Gershon. Cena’s battle cry, Never Give Up, transcends generations and demonstrates to all of us what real strength is all about. Gershon showed us an autographed poster Cena sent to Gershon a few months ago. The Champ’s video game also helping in his recovery. 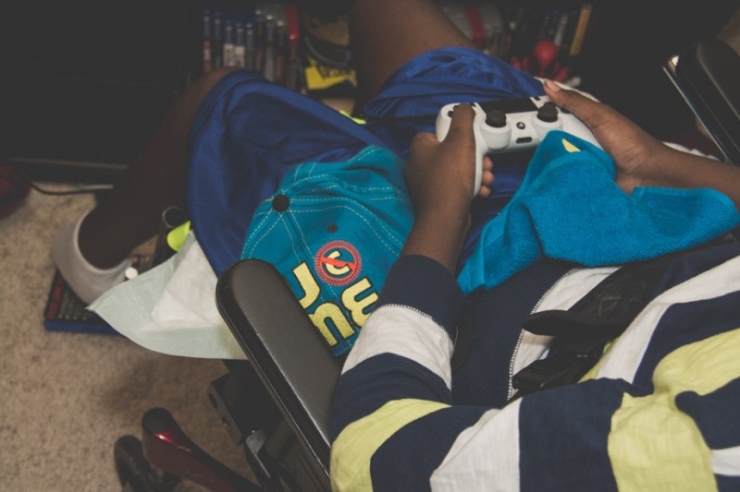 To help with his dexterity, Gershon started playing video games to regain some digital function and coordination. His favorite game is WWE 2K16. The game helped Gershon regain control of his hands which, in turn, has helped Gershon learn sign language. Still, with Gershon’s limited mobility, there is a far better way for him to communicate – Something we saw on our visit that he did not have, an eye gaze machine. Eye gaze machines would track Gershon’s eye movements and would finally allow Gershon to effectively communicate with people. 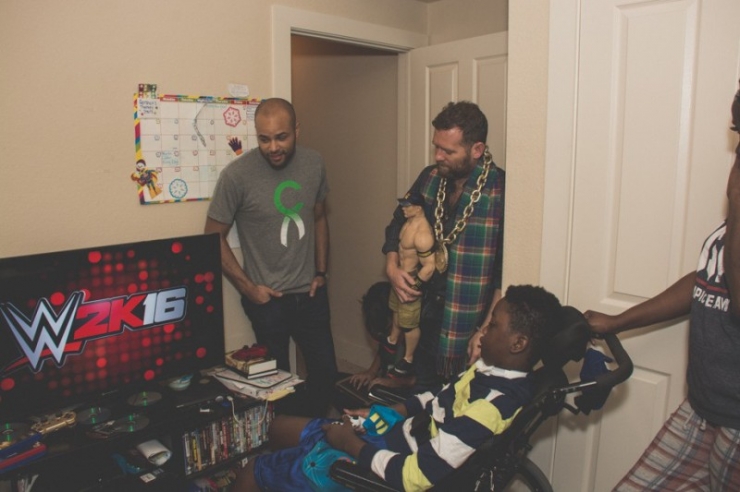 We asked Gershon what keeps him motivated? He fumbled for his old Sony Playstation, turned it on, and showed us the photo of the bike he used to ride. Gershon is determined to ride it again. 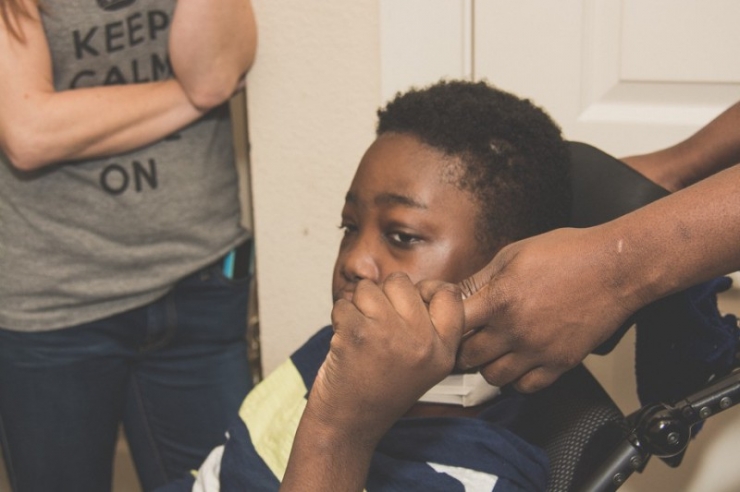 This was the moment we knew we could do more, that it was time to ease this family’s burden. We knew we were here for a reason, because life never gives you more than you can handle. 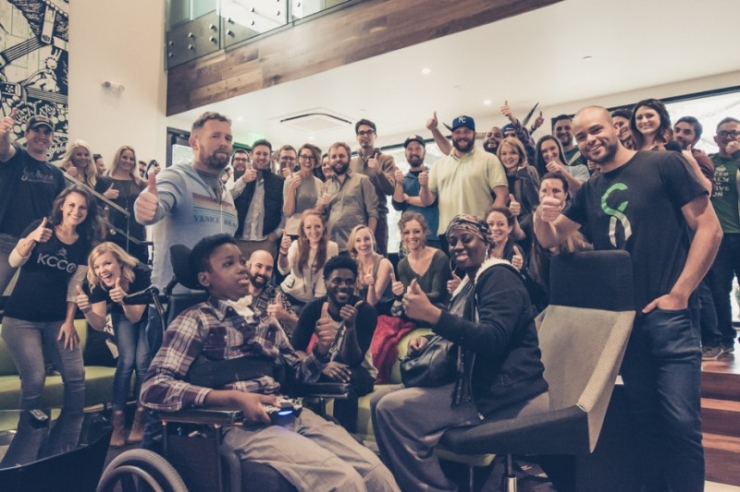 About 15 minutes before our story went live, Gershon arrived at theCHIVE HQ. He will get to hit the ‘publish’ button to make his own GoFundMe campaign live. It would be the first time in Chive Charities history. 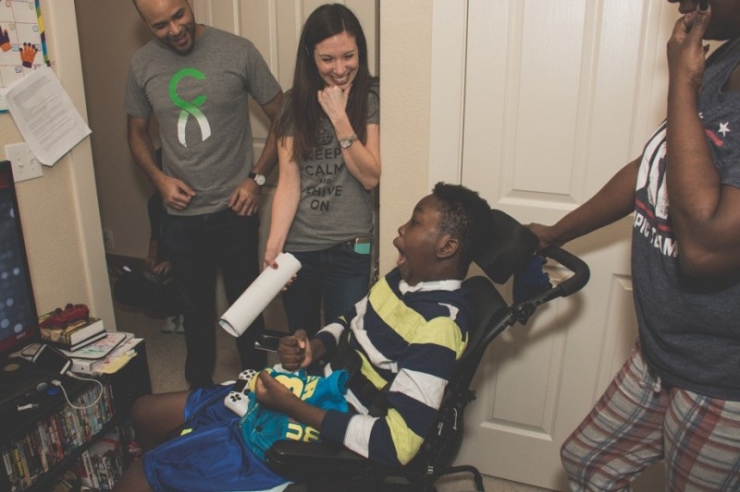 Can you imagine being told that you’re going to get a machine to help you spell words with your eyes and being overwhelmed with joy?

But somewhere there’s a boy who survived more brain surgeries than most healthy humans could endure and he did so with both his brain and body failing him. Time and again death came calling and Gershon fought back against the darkness. Having survived, his outlook on life is so positive that the possibility that life might afford him the ability to simply communicate with his family and friends overwhelms him with happiness.

So we should get him that machine, I think. I promised Gershon I would. Models run about $10,000 but the top line models that generate audible speech are around $20,000. We’ve started a GoFundMe Page for Gershon and the goal is set at $10,000. Thank you for supporting this, let’s show Gershon that our follow through packs a punch. 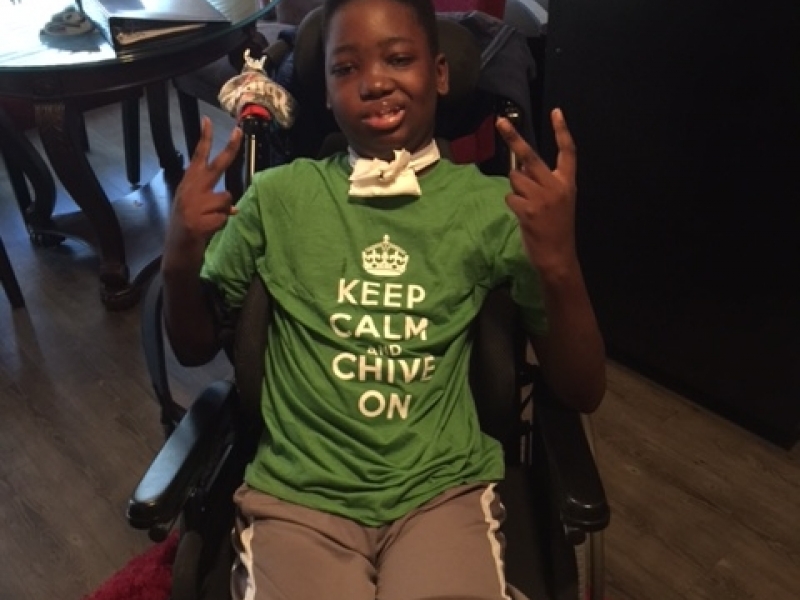 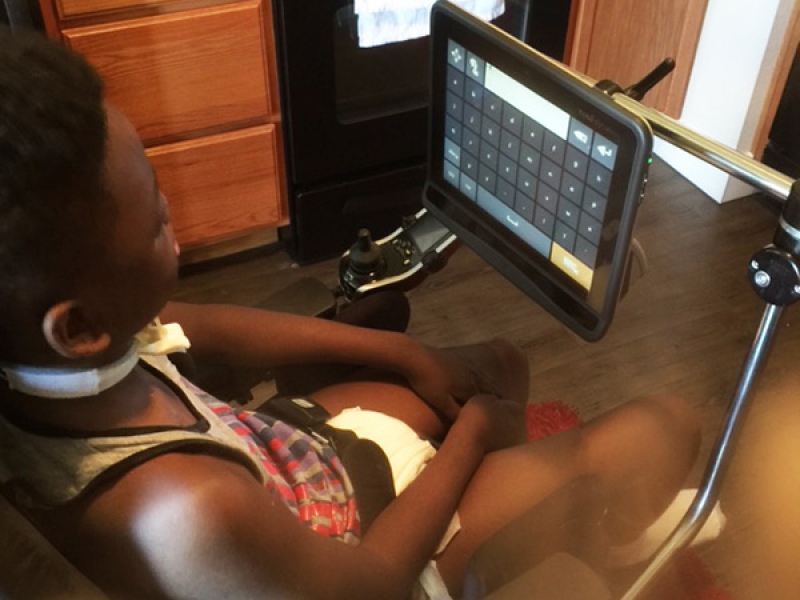