Michael's strength won him the heart of a nation

Michael’s strength won him the heart of a nation

A few months later, special walking casts had been placed on his legs to try and fix this walking-on-his-toes thing. The cast provided a continuous stretch to strengthen the calf and the doctors hoped it would put him back on his feet properly again.

Elementary school is no place for a kid with casts on both his legs. He walked with an obvious limp. He deflected the teasing with humor by telling the kids in class his parachute didn’t open in time. But some kids teased Michael not only verbally, but physically. Because Michael walked on the tips of his toes so much, he was an easy target for tripping. Kids would kick his heels or sweep his toes and down he went. It was a daily ritual for the bullies.

One day, a boy named Nelson sat down and started talking to Michael about computers. They both loved video games and had both independently figured out how to bypass the library’s security system so they could secretly play Oregon Trail on the library computers. A pudgy bully named Andrew approached the table. Another wave of abuse was imminent, “Hey dummy-”

“Stop.” Nelson said, firmly, “You’re done teasing my friend. Leave. And tell your butthead friends to leave Michael alone, too. Or else.”

Nobody had stuck up for Michael like that outside of his family. It was amazing. Nelson introduced Michael to his friend Bryan. The three became best friends through elementary school and the two steadfastly protected Michael from bullies. But eventually Elementary school ended and a diagnosis arrived. It wasn’t good.

Michael had Sarcoid Myopathy. It’s a disease rarely seen in children that attacks your muscles. The muscles become increasingly weak until they lose all their strength, like an elastic band after it’s been through a hundred washes. There is no cure for the disease and it is nothing short of relentless as it attacks and breaks down muscle tissue. Michael is the only documented case in America since the early 1970s.

Middle school left Michael exposed again. Nelson had moved across town and attended a different school. He was bullied, sometimes by misguided teachers. “There were times when we’d run in gym class. The teacher would make everybody run behind me and not pass me because we ‘had to strengthen our weakest link.’ That was embarrassing. I would eat lunch in the computer lab to avoid kids tormenting me. I was sleeping a lot because I was so fatigued. You know how you have dreams when you’re running from danger but you can’t escape because you’re running in slow motion? I would have those dreams and wake up and my legs would be numb. The feeling would return but it seemed to take more time to recover after each episode.”

Michael skipped the adolescent milestones. Michael’s grandmother Flo gave him a car for his 16th birthday. He didn’t have the heart to tell her if he tried to drive it, he would seriously hurt somebody. He never had a first date. “However, I’d like to note that my physical therapists were hot.”
(edit: Michael actually dated a really cute girl from Urban Outfitters. Well done, buddy)

Then one night Michael woke up from another nightmare and the feeling in his legs didn’t return. He felt as if he was going paralyzed, and he was. He felt the numbness spread up his chest from his legs. Michael had contracted Neurosarcoidosis, an extremely rare form of Sarcoidosis that attacks the nervous system. “In my case, doctors believe it caused my stroke and coma.” Michael rolled out of bed onto the floor and army crawled to his parent’s room. He collapsed at the foot of their bed, temporarily paralyzed.

Michael had graduated with honors and the highest academic award given in his high school, the Presidential Award for academic excellence. He wasn’t quick on his feet anymore, but he could still walk, and his mental acuity was sharp as ever. Early in the morning, Michael felt a headache coming on. Though he didn’t know it at the time, his brain was hemorrhaging. He was having a stroke – the Neurosarcoidosis and its ominous promise of a stroke had arrived, and it was dealing a near-fatal blow. Michael drifted into a coma. When he woke up, he was unable to walk and confined to a wheelchair. His muscles had all but given up. Michael had lost his independence. His first thought when he awoke was, “I’m alive.” 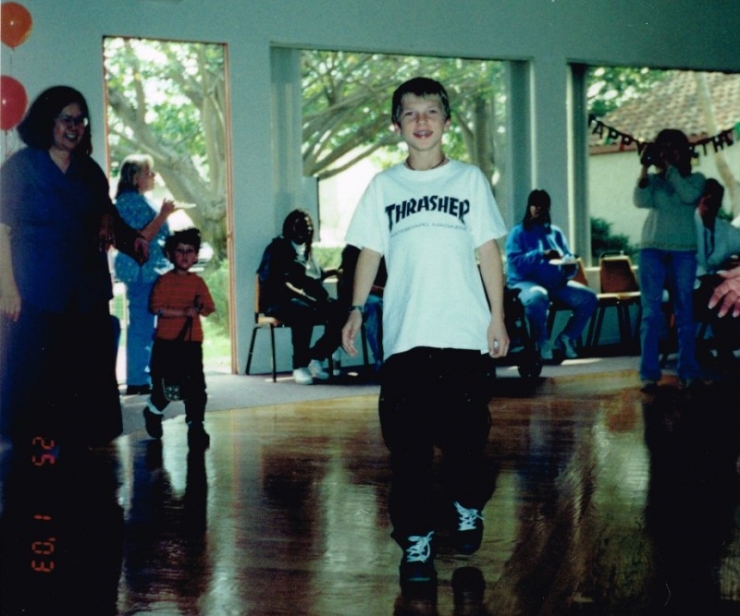 His whole life Micheal was optimistic and healthy… 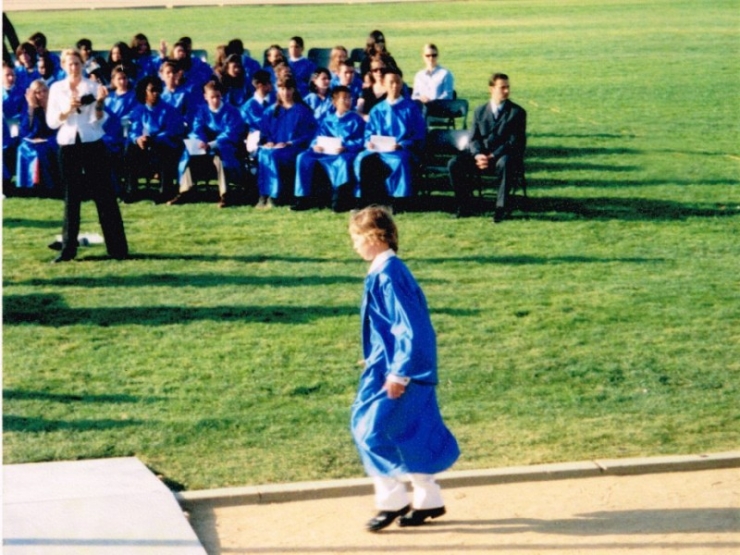 You can see how he started walking gently on the balls of his feet. Not long after that photo was taken, Michael was in and out of a wheelchair. 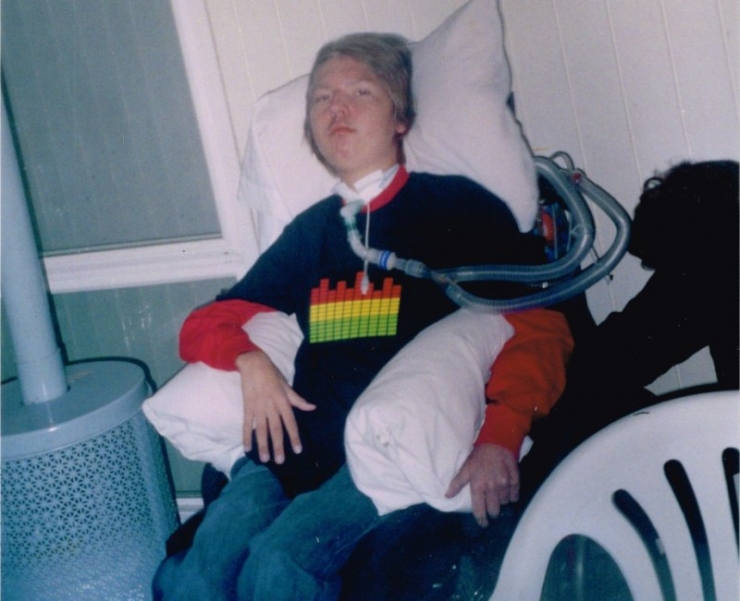 Michael had a seizure in October 2008 that sent him to the hospital. His oxygen levels dropped dramatically. Michael was given a tracheotomy and ventilator that he now has to use 24/7 to survive. That event was the precursor to his stroke. 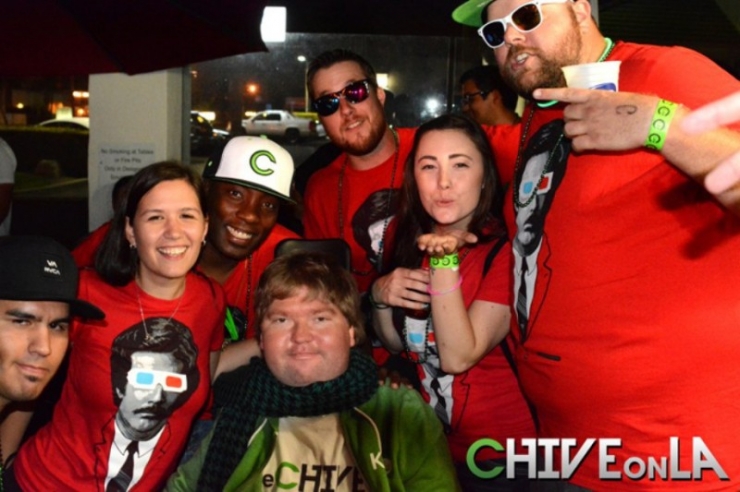 The San Diego Chivers (who have since merged with LA to become Chive On California) meet Michael for the first time in Huntington Beach. 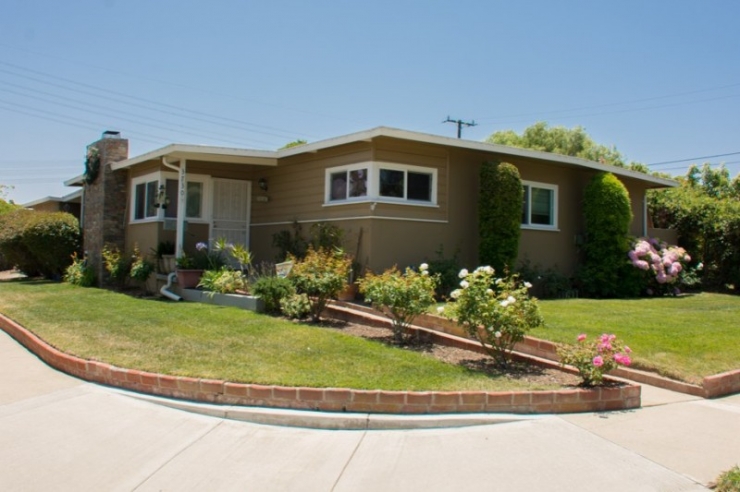 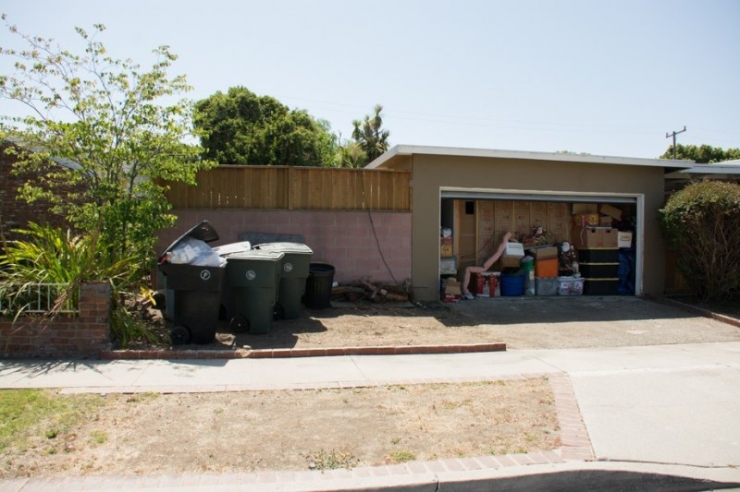 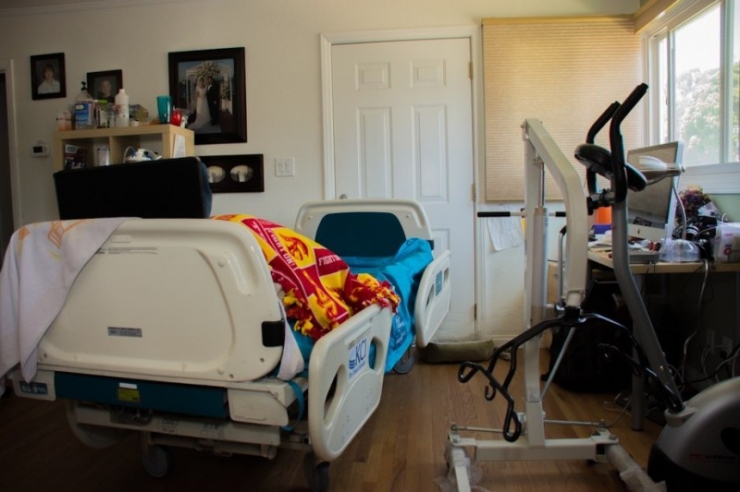 Michael requires a medical bed that will only fit in the living room. He has zero privacy. 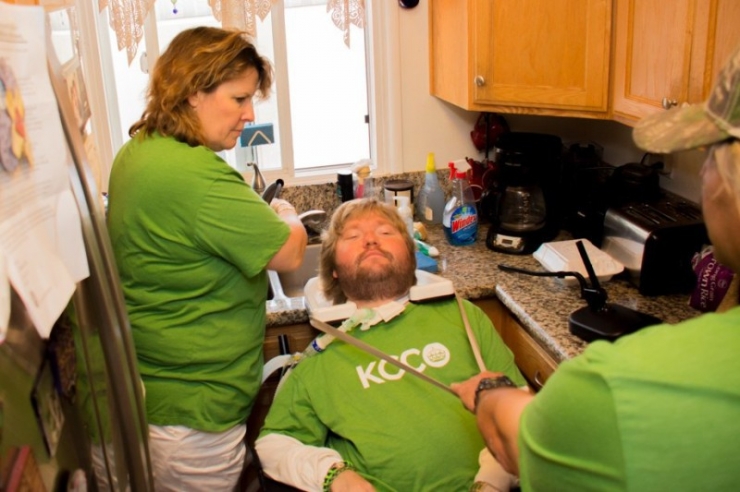 Michael’s father holds his head steady while his mother washes his hair. 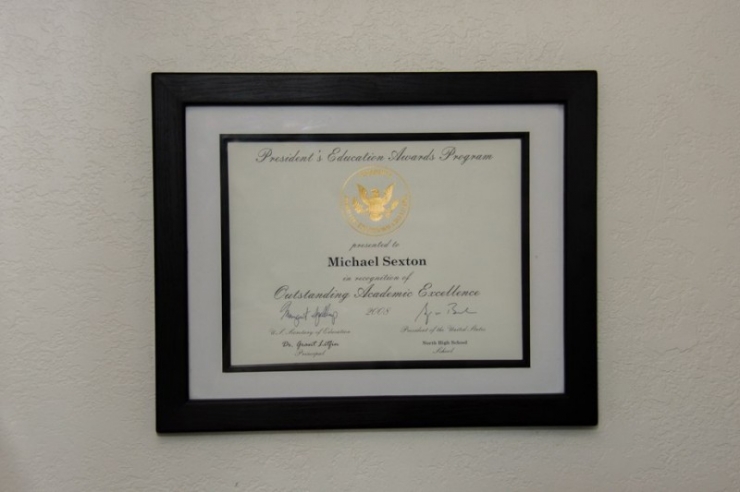 On the wall hangs Michael’s academic award he worked so hard for. 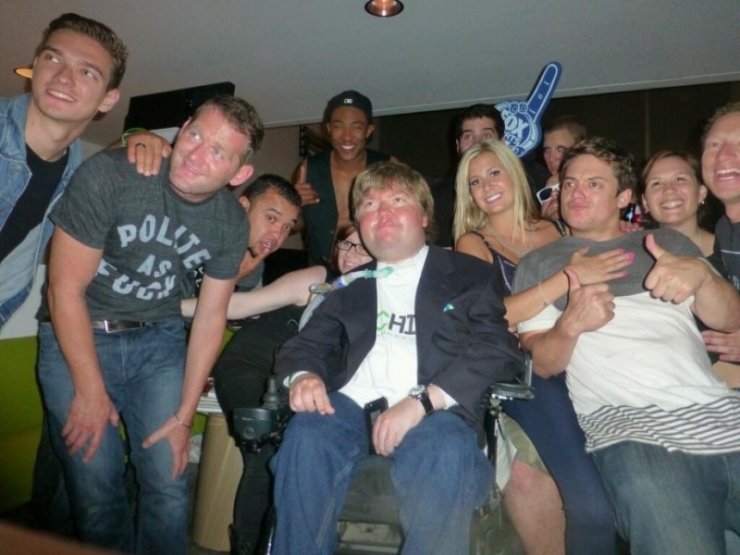 It’s time to get Michael the help he needs. The goal is set at $50,000. The renovations, in total, cost $150,000, and Chive Charities is getting the ball rolling with a $100,000 donation to Michael. We’re asking the Chivers to bring it home! This will complete construction. As always, additional home modifications can be added, depending on whether or not the Chivers choose to Hulk-smash the goal. 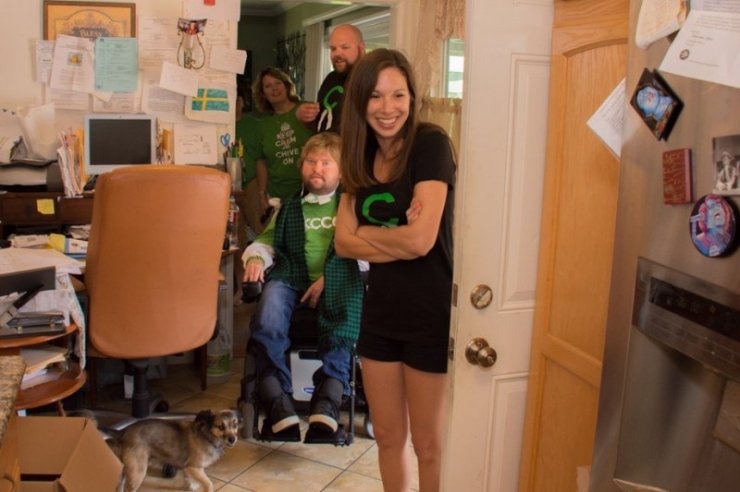 Angie told me a story about watching Michael try to get around his home. “The house is not built to have Michael in it right now. It was heartbreaking, John. We have to help him.” 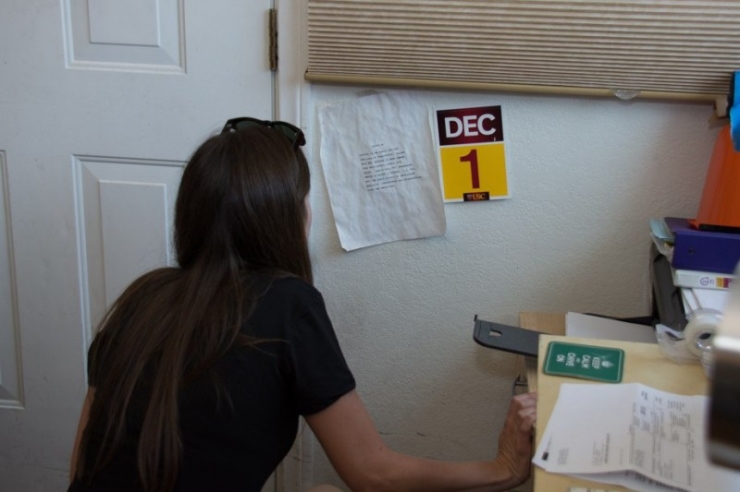 As Angie left, she noticed an inspiration note on the wall. 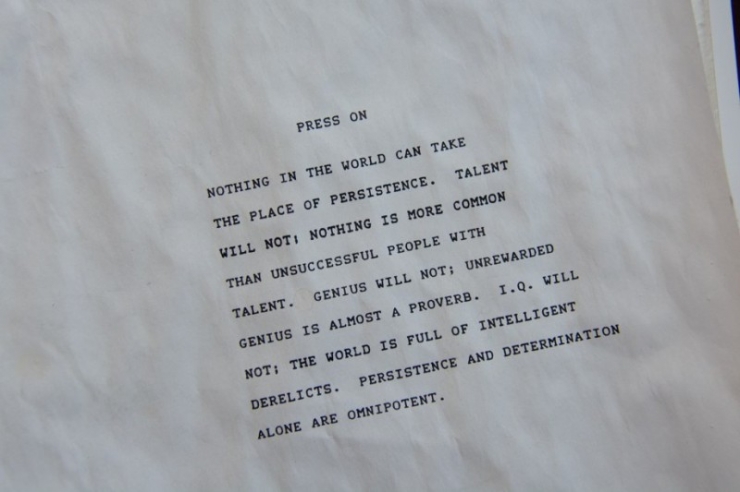 “When I first discovered the Chive community, you guys were so welcoming; and I don’t just mean John and everybody who worked at the Venice Office. I mean the Chivers in general. The Chive in Venice was like my own personal Neverland, an escape from reality and cruel people. I had a best friend once who protected me and he never treated me like I was different. That’s the way it was at theCHIVE. I was always welcome there and I was on equal footing with everybody else. All I had to do was “handle my shit” lol. I made many friends there.

Chivers had been encouraging me and my family to apply to Chive Charities, but this was not something that was easy for me at all. I was worried it would break the bond we had by holding my hand out and admitting I needed help. But I looked around my house.

The idea of having a shower inside a restroom with real running water along with the fact that I won’t have to be freezing from bathing in the living room anymore… I filled out the application. The day you guys called me, I was speechless with joy. Not for what it meant to me, but what it meant to my family."

-Michael, to the Chivers 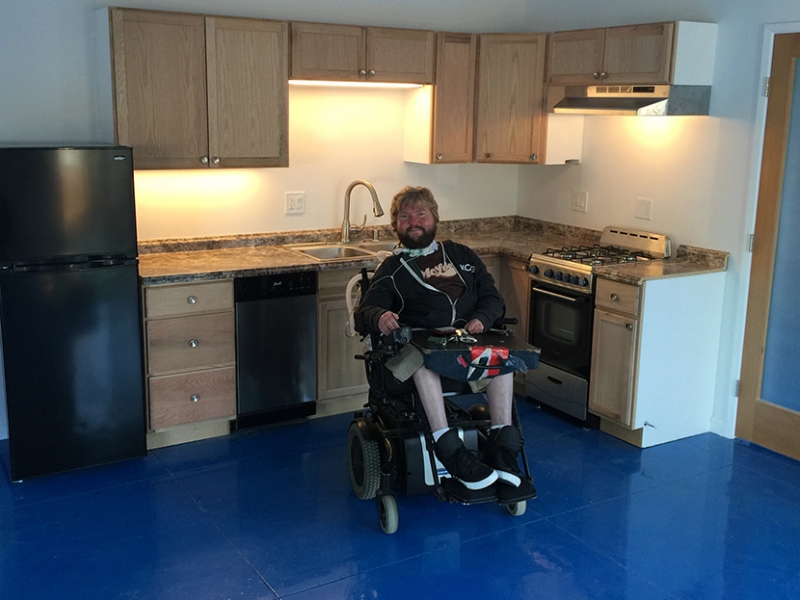 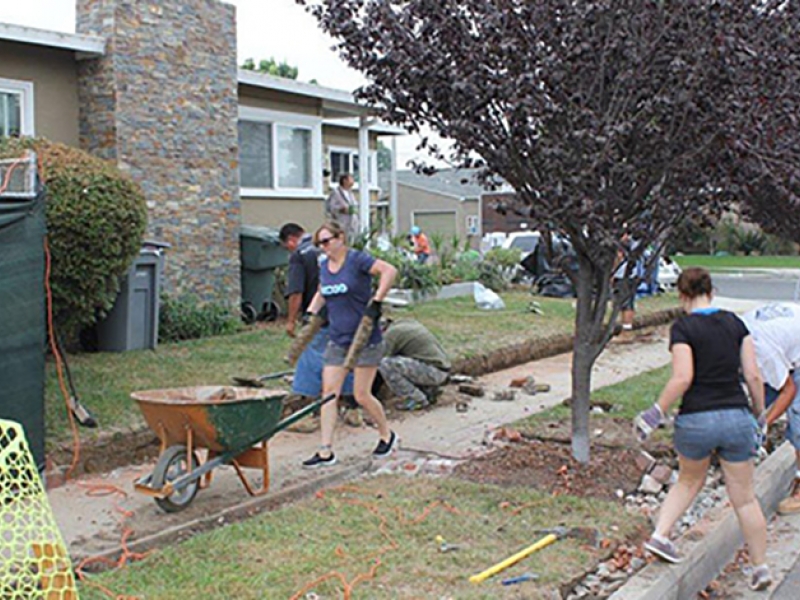