35,000 decisions and the one that changed it all

a vehicle of her own with hand controls from AMS Vans

In 2007, researchers at Cornell University estimated that the average adult makes about 35,000 “remotely conscious” decisions each day. It’s everything from what to eat and what to wear to what we say and how we say it.

Assuming that most people spend around seven hours per day sleeping and thus blissfully choice-free, that makes roughly 2,000 decisions per hour or one decision every two seconds – and 226.7 of them are about food alone.

Each decision, of course, carries certain consequences with it that are both good and bad. But, for many of us, those consequences are short-lived and relatively harmless in the grand scheme of things.

Less than a decade ago, Tamesha (“Meshi”) was a 12-year-old girl facing a decision that promised to change the course of her life. And this one was far from harmless.

She was born into a family of five sisters, one of whom is her twin. While she has good relationships with both of her parents, Meshi grew up in a single-parent household and her family faced many challenges financially that left them without lights or water and near-constant evictions. 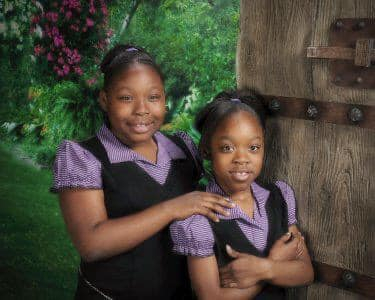 On top of that, she had her own personal hurdles to overcome. Meshi was born with a congenital disorder called Klippel-Trenaunay syndrome (KTS), a rare disease that affects the development of blood vessels, soft tissues like skin and muscles, and bones.

“Because of my disease, I have spent half of my life in the hospital and have faced struggles with my physical and mental health,” Meshi told us. “It mostly affected my ability to walk and caused me an excruciating amount of pain in my legs.” 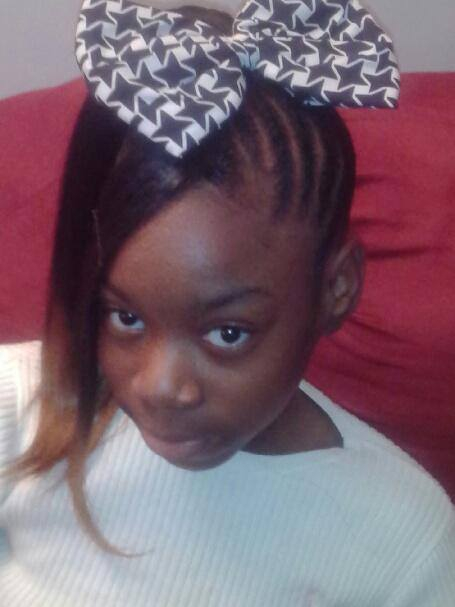 In the blink of an eye, she went from walking with a limp to needing crutches, eventually relying on a walker for mobility. Because of the incredible amount of pain, she favored her legs so much that they grew stuck at an angle.

“Since I was a little kid, I dreamed of walking,” she explained. “I just felt like I was going to get better. It took a while to realize I wasn’t.”

By her 12th birthday, the daily pain was so bad that she started thinking about amputation, and by 14, her decision was made. 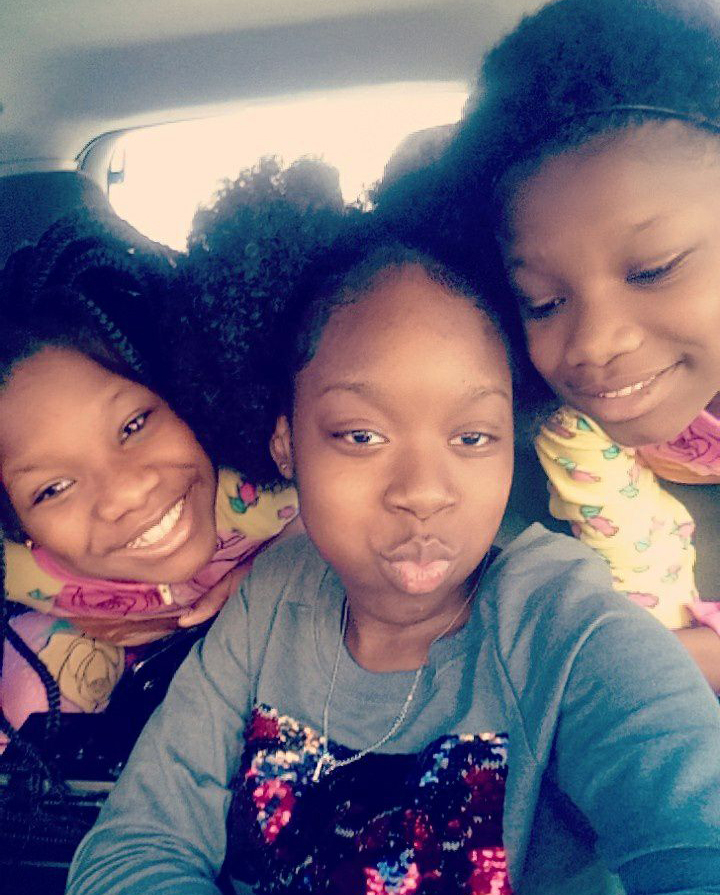 “I met with a doctor, and he explained how he would do a left leg extension to straighten it and then later amputate the right leg,” Meshi told us. “That way, I would have a good leg to stand on.” 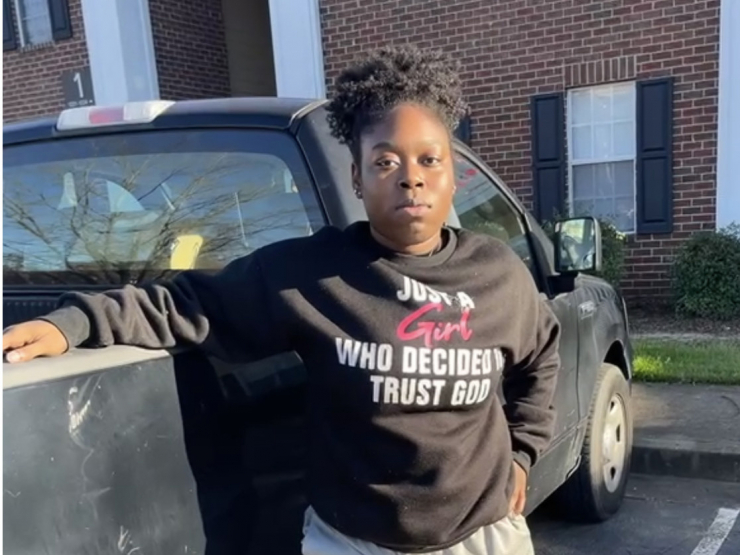 During the procedure, the surgeon made thousands of decisions. Small movements of his hands controlled a scalpel that brushed against nerves and muscles and veins. Nearly imperceptible flicks of the wrist that seemed so casual, yet so skilled.

When Meshi awoke from anesthesia, she felt nothing in her left leg. Concerned, she asked the medical team who assured her that it was an anesthesia block that would slowly fade, reducing the numbness and returning feeling to her leg.

But tragically, Meshi was never able to feel her left leg below the knee again. 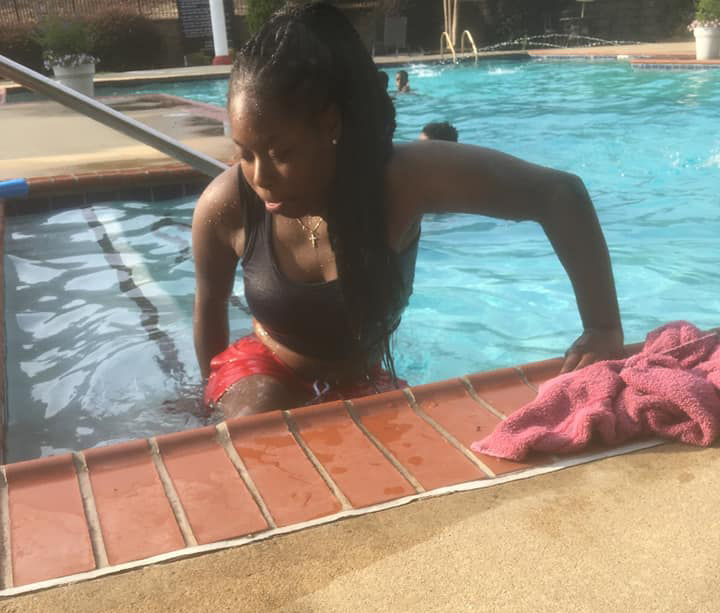 Eventually, other doctors uncovered the truth of what happened in the operating room that day. At some point during the surgery, the doctor had stretched a nerve, causing damage beyond repair. And not only did the leg extension fail, but it also stole her only chance at having a good leg to stand on.

“It was surreal,” she quietly said.

On February 15, 2019, Meshi had a successful bilateral above-knee amputation. 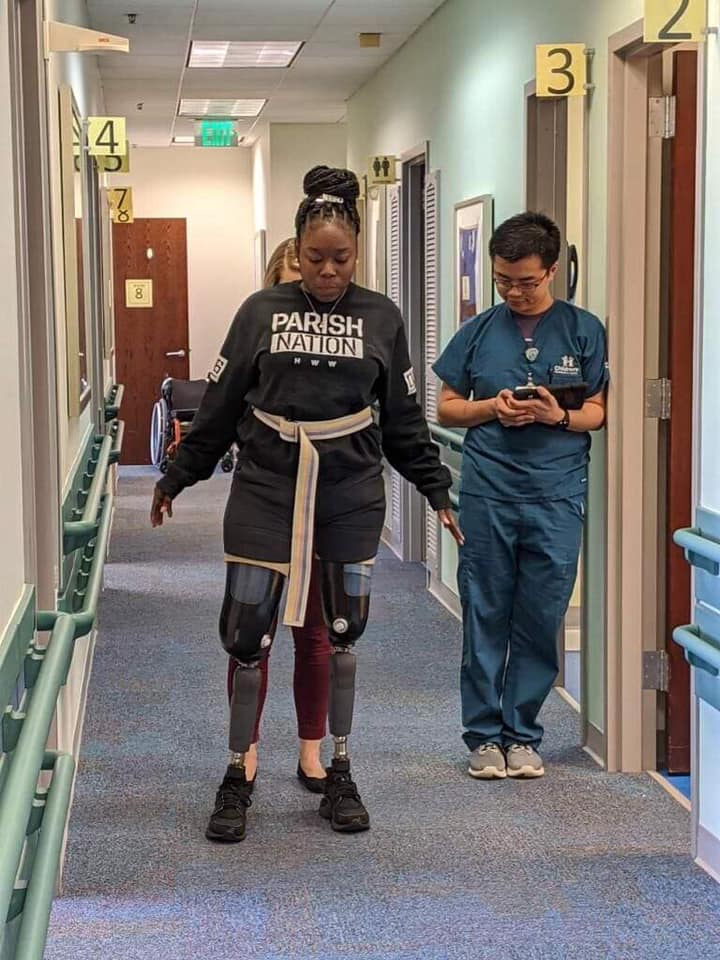 “I just remember the long wait for amputation day,” she explained. “Once I made that decision, I was ready to get it over with. It was a struggle, for sure, but I met a lot of great people who took care of me.” 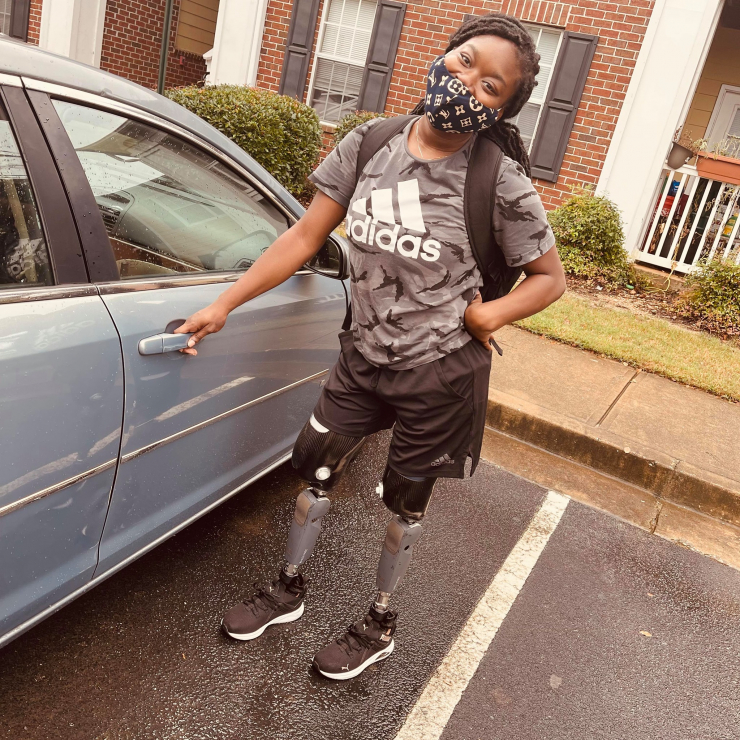 Making the decision to amputate your leg as a teenager is hard enough to fathom, let alone losing both of them. And beyond that, she has overcome more adversity than most of us will face in our lifetimes. Last year, her family was evicted again and forced to live in a hotel. And earlier this summer, she was laid off from her job. 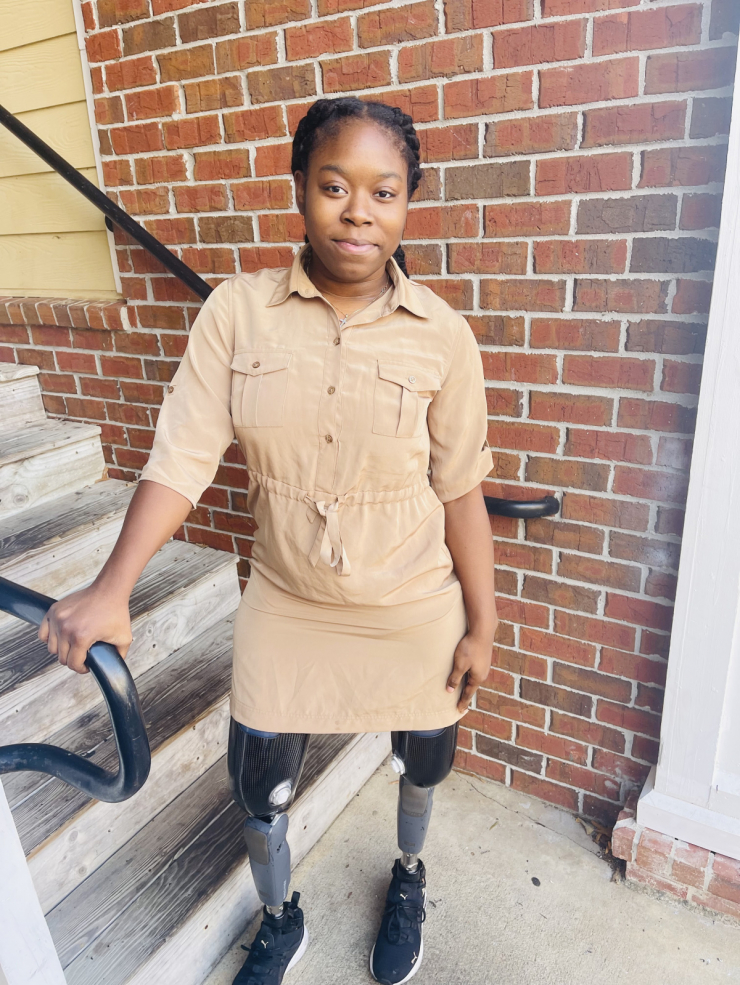 Meshi is putting all of her efforts into becoming a 9-1-1 operator and recently secured an apartment for her and her 18-year-old sister. She dreams of enrolling back at the Georgia Military College to finish her degree and pursue her goal of working as a child life specialist. 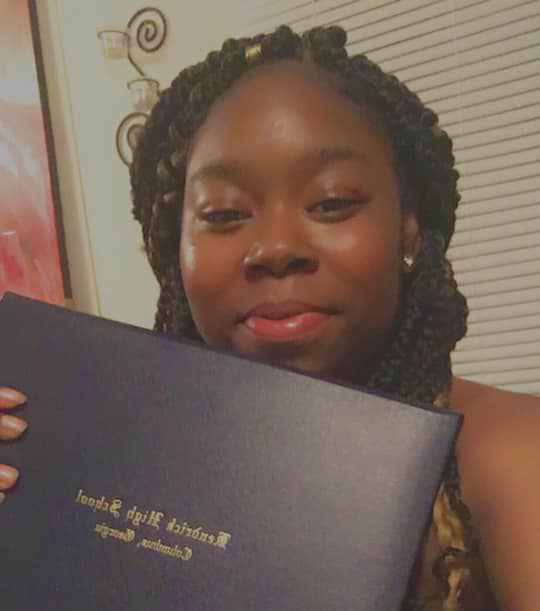 “I also really want to run,” she said with a smile on her face. “Wait – I take that back. I don’t just want to run…I will run.” 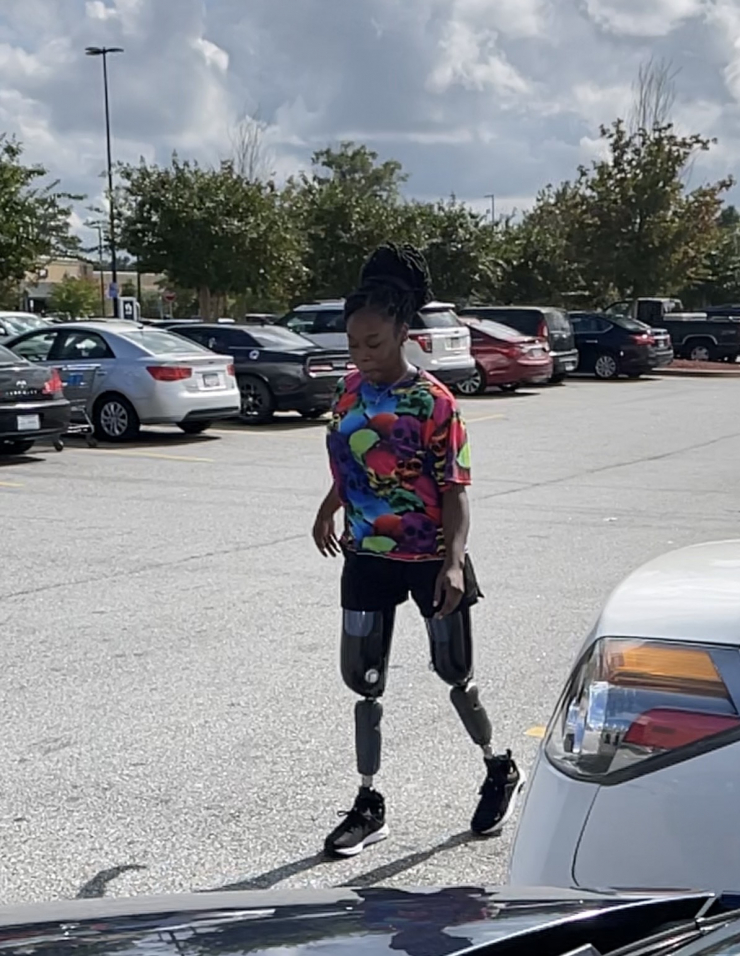 While we’re firm believers that she’ll send us a running update soon, that’s not exactly a long-term transportation solution. Not the kind we think she deserves anyway.

Meshi has been in the rehabilitation program at Children’s Healthcare of Atlanta (CHOA) for a few months now learning how to drive with hand controls. She was hoping to maintain her independence, get to work and school, and be able to take care of herself. And she was hoping Chive Charities might be the ones to help make it happen.

We read her application and our jaws dropped. If an adaptive vehicle could lift some of the burdens from her shoulders, it had to be done. 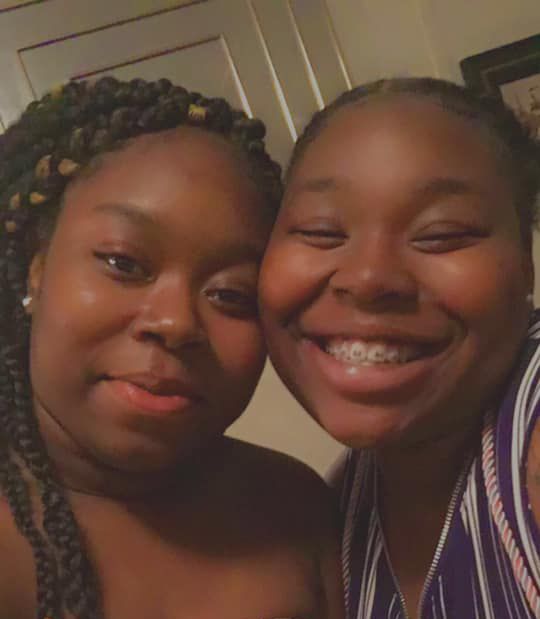 Through the support of our monthly and one-time donors, Chive Charities was able to fund a gold 2018 Chevy Malibu with hand controls for a total impact of $28,142. 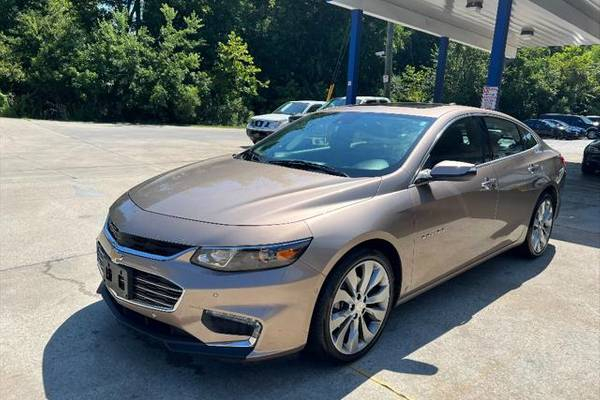 “It has been a rollercoaster, but I’m grateful for every moment,” Meshi said. “I’m determined to become the best version of myself and achieve any goal I set. Thank you to everyone who supported me on my journey to be more independent. It means the world to me.” 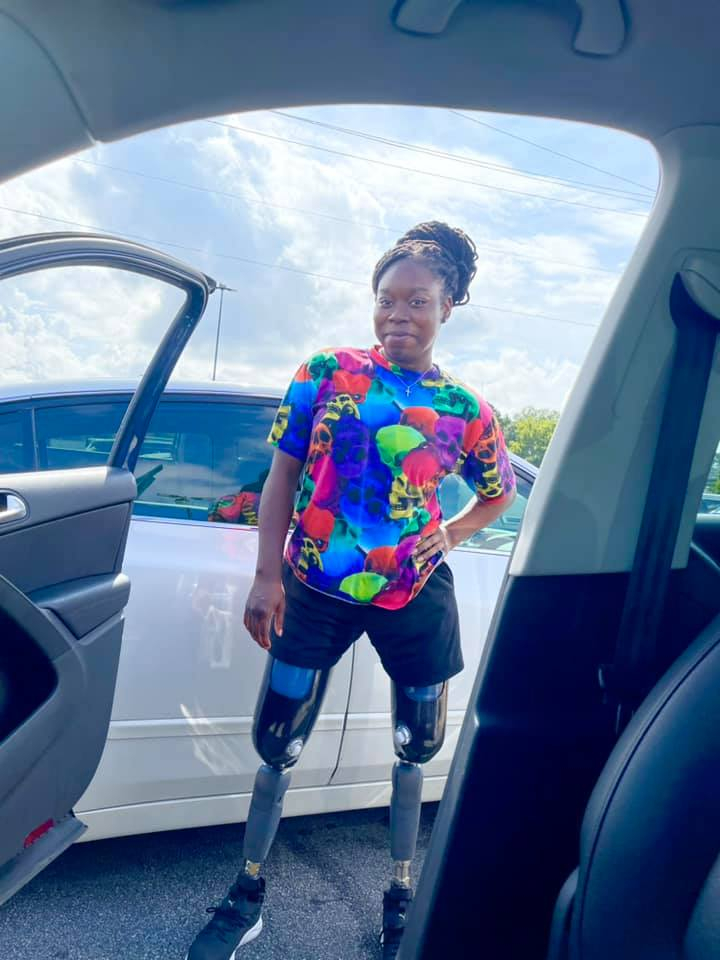 There’s no question that life is full of decisions. Most of us will never face decisions like the ones Meshi had to make. Pain or amputation? One leg or both? Give up or fight? Statistically, during this story alone, you made more than 100 of them, and probably few, if any, that you’ll even recall. Why not make it 101?

Consider donating to Chive Charities each month for $10 or more and help us change the lives of more recipients. We can’t do it without you. But the decision is yours: DONATE HERE.