In the flip of a switch, a superhero appears.

The early Superman comics depict Clark Kent entering a phone booth and emerging as the caped hero we all know and love. In the flip of a switch, a seemingly ordinary person becomes someone with exceptional strength and power.

It reminds us a lot of Elijah Dudley (he even has the cape). 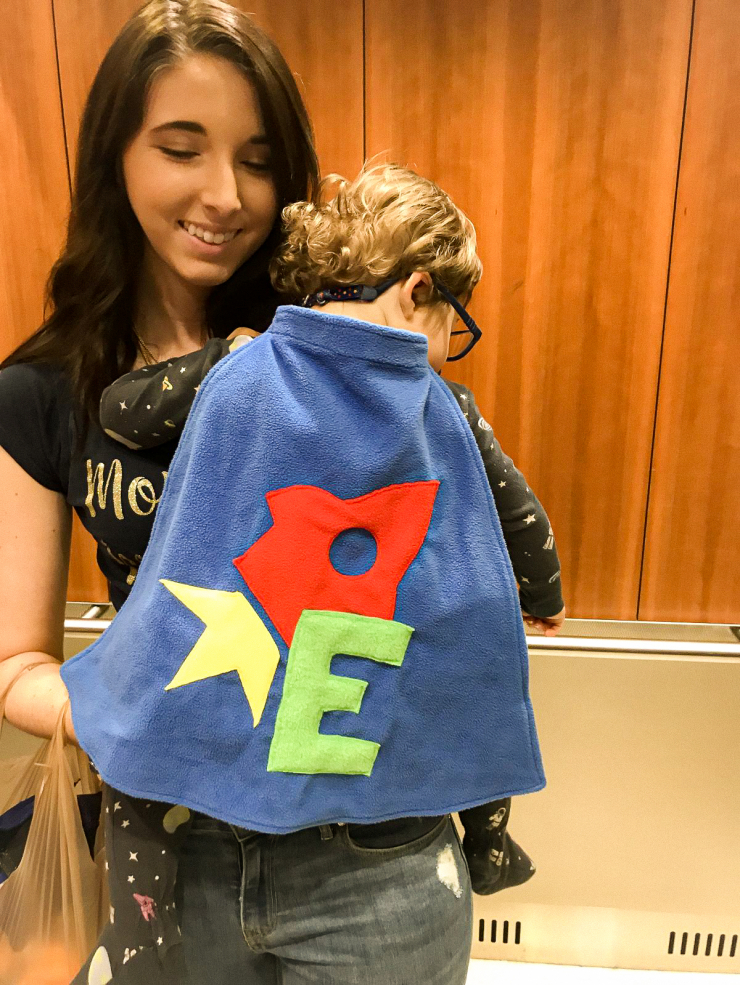 Like all good superheroes, Eli knows how to make a dramatic entrance. On the morning of September 30, 2017, he arrived weighing a tiny 4lbs 8oz, a full month early and nearly three weeks behind on his growth.

“Eli’s umbilical cord was wrapped around his neck, and he wasn’t crying,” his mom Alexis told us. “I remember immediately sitting up to see the baby I couldn’t hear, and telling him, ‘come on, buddy.’ He began to cry, and I sat back in the bed with relief. I got to hold my baby and see his face for 30 seconds before he began showing signs of respiratory distress and was taken from my arms and rushed to the NICU.”

In the flip of a switch, Eli became a superhero, transforming from an innocent newborn baby to a fighter with extraordinary strength. 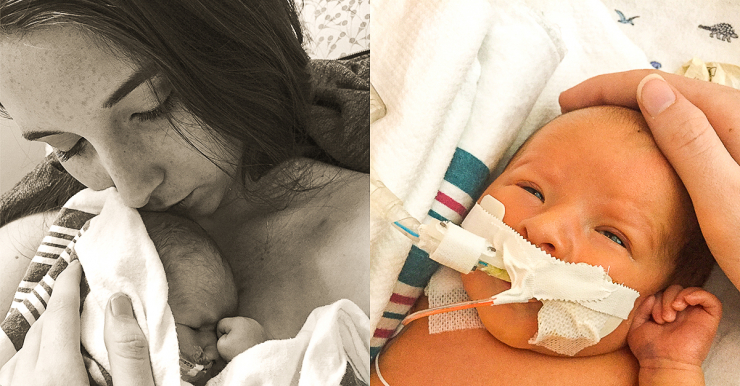 Doctors thought Eli had pneumonia, but he wasn’t responding to treatment. In fact, he was getting worse. On the same day Alexis was to be discharged, she heard the voices of doctors outside her hospital room.

When they stepped inside, the news was grim. Eli’s health was declining, and the medical team didn’t know why. What they did know was that he needed a PIC line placed or he would not survive — a helicopter was arriving within the hour to take him to UVA. 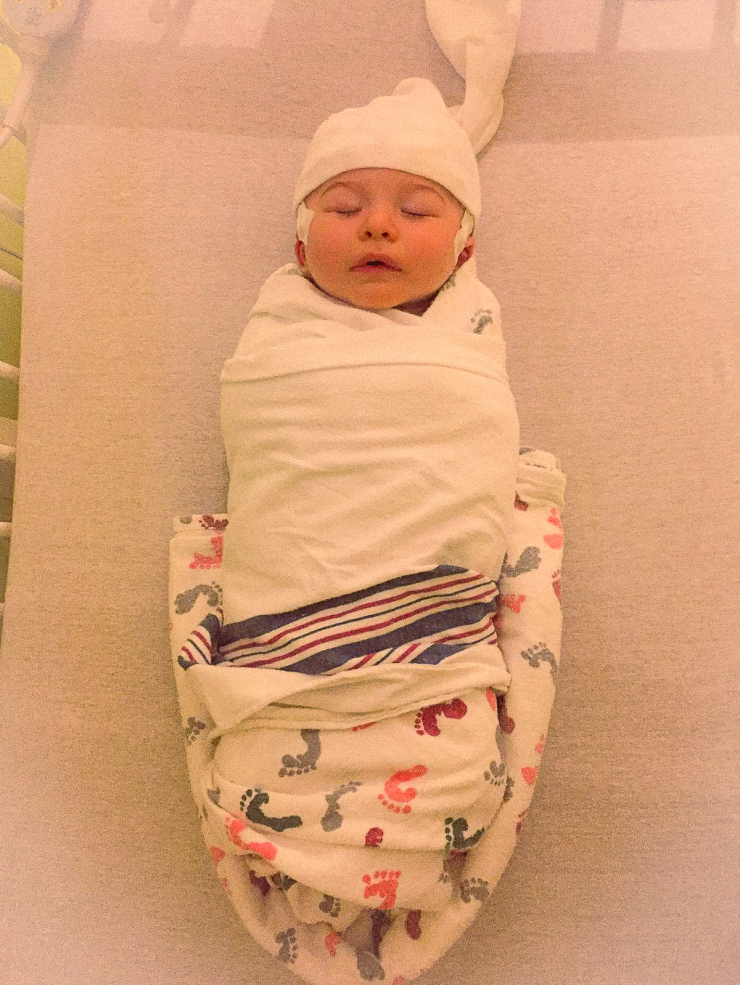 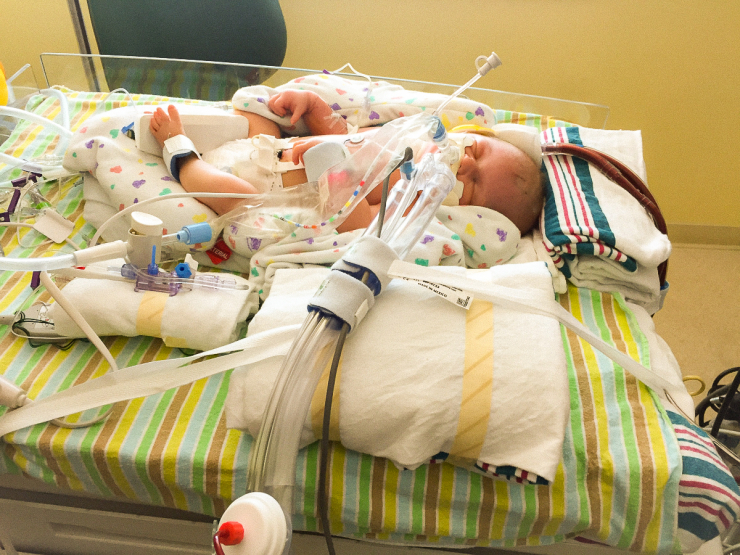 When Eli arrived at UVA, he was practically comatose, but this superhero was doing everything he could to stay strong and keep fighting. Doctors would eventually place him on ECMO, a life-support machine that replaces the function of the heart and lungs, and while it helped regulate Eli’s condition, it resulted in multiple grade IV bilateral brain bleeds.

A long, eventful month after his birth, Eli was stable enough to go home. Superman could finally get a rest, pack his cape away for another day, and don his signature glasses. 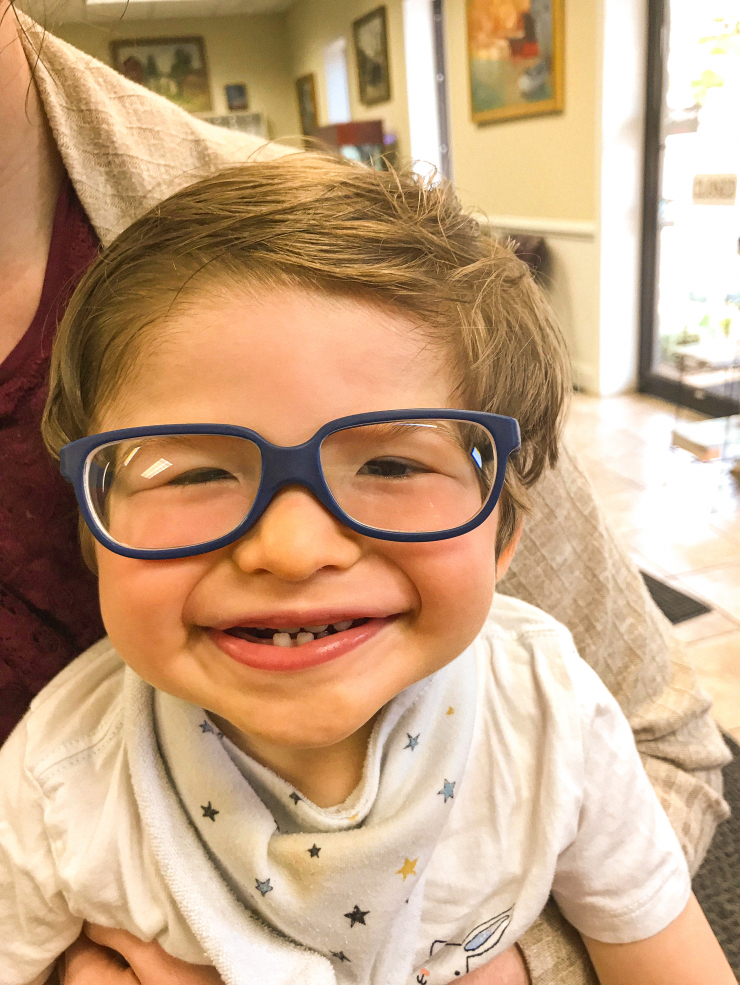 Since then, he’s made steady progress, gradually improving through physical, occupational, speech, and feeding therapy. He’s had a lot of moments just being a kid.

He’s taken a trip to the zoo, gone fishing, and even been on a hike or two. 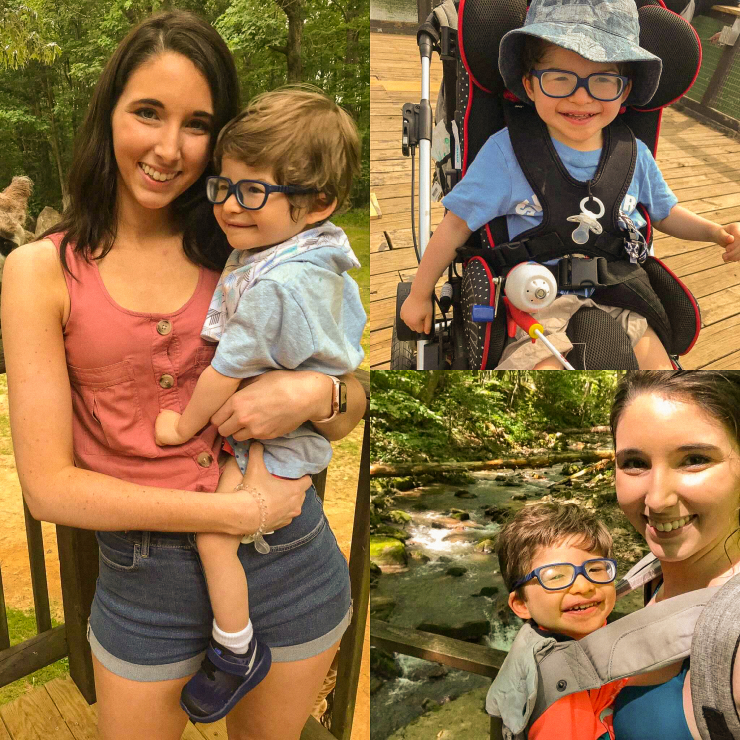 But sometimes, Clark Kent has to transform back into Superman. Even when he doesn’t want to.

About a year after Eli’s birth, he underwent genetic testing to determine what could be causing some of his developmental delays and recent seizure activity.

“I was in the car driving to pick him up from my family’s house after work, and was at the top of the neighborhood when I got the call,” Alexis said. “The genetic counselor said they found something — Eli had Pitt Hopkins syndrome.” 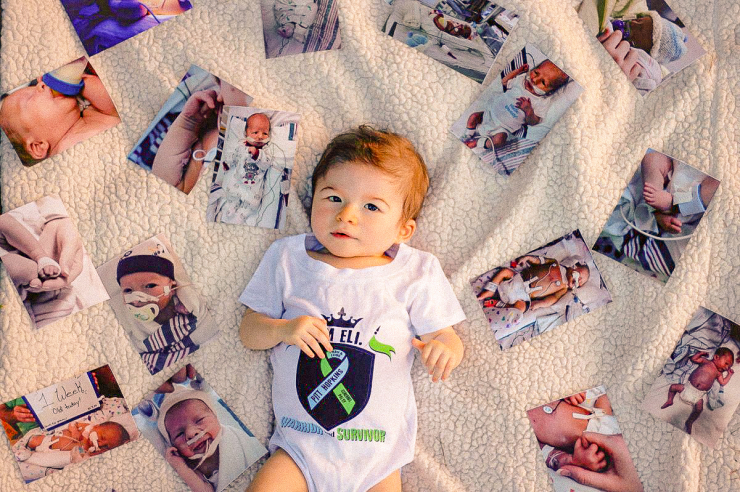 Like most others, Alexis had never heard of Pitt Hopkins before. A rare genetic syndrome, it causes global developmental delays, GI issues, high risk for epilepsy, breathing problems, extreme nearsightedness, and the majority of diagnosees are nonverbal.

“Our diagnosis day looked different than most,” Alexis said. “For me, I had already stood beside my child as he lay on his death bed, everything else seemed minuscule in comparison.”

From Clark Kent back to Superman. The cape was back. 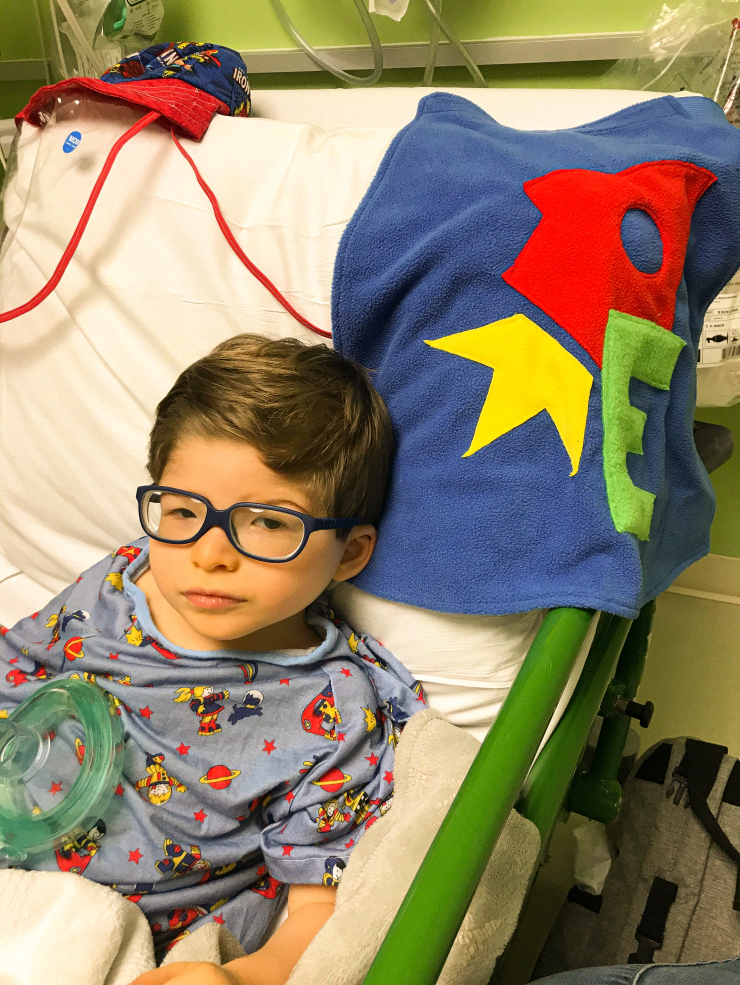 But every now and then, even Superman needs some help. From the moment Eli was born, Alexis has spent a lot of time advocating for her son. The genetics specialist at Mass General recommended a CME therapy program, one that’s incredibly beneficial for children with Pitt Hopkins who struggle with balance and other challenges. 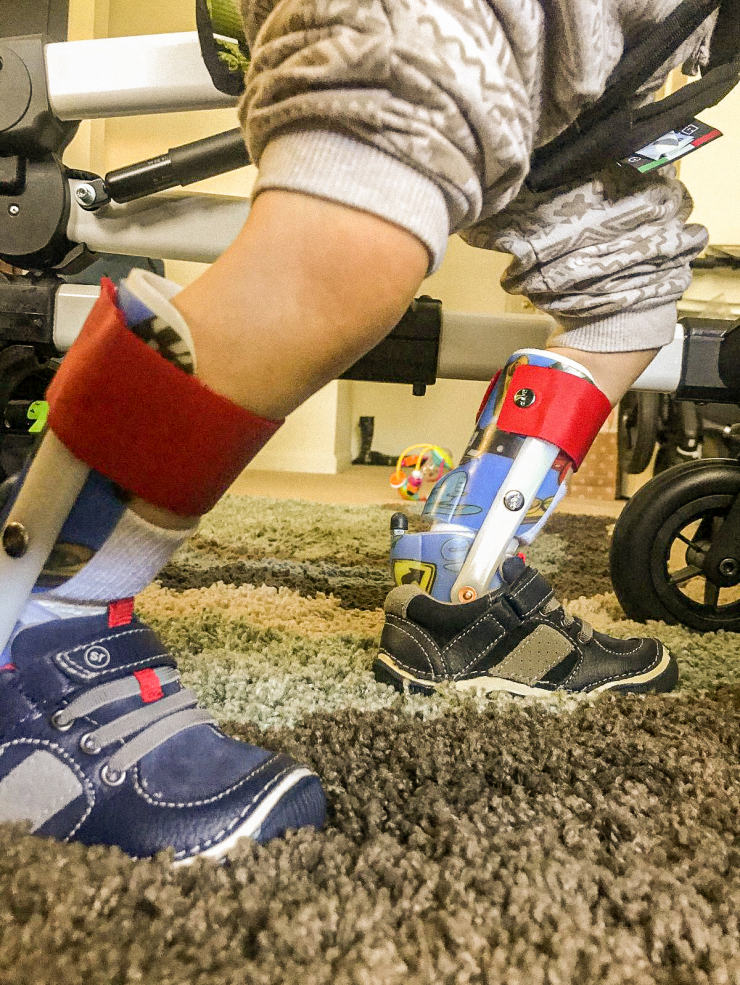 One of the best CME therapy programs in the country is offered by NAPA Center, and they do not mess around. Attendees participate in an intensive three-week therapy program so specialized, it’s equivalent to six months up to one year of traditional therapies.

Eli consistently demonstrates exceptional strength in the face of adversity. Imagine what he could do with some one-on-one, personalized help. Like his shirt says: unstoppable. 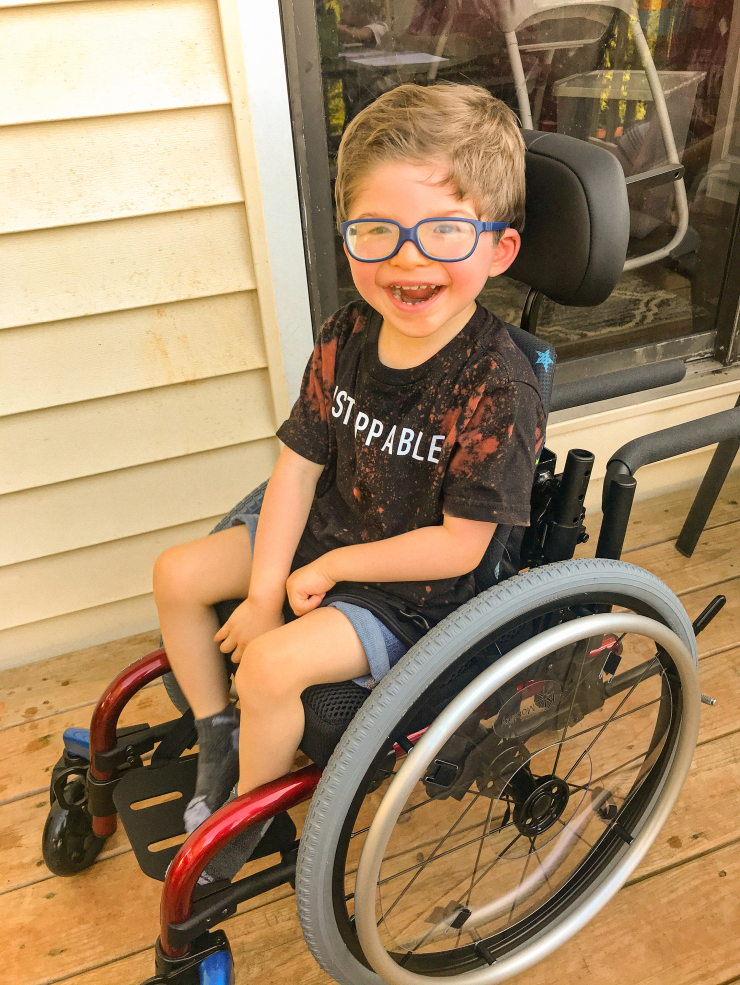 “Opportunities like NAPA give Eli a greater chance at his goals becoming a reality,” Alexis explained. “It makes the things he enjoys doing a little easier and the things he would like to do a little more obtainable. I don’t want Eli to have a life of limitations, but a life of adaptations. I want him to have a life full of experiences.”

So with the life-saving support of our dedicated donor family (which you can join HERE), we put on a cape of our own and answered the call for help. This is our chance to help him flip the switch again. 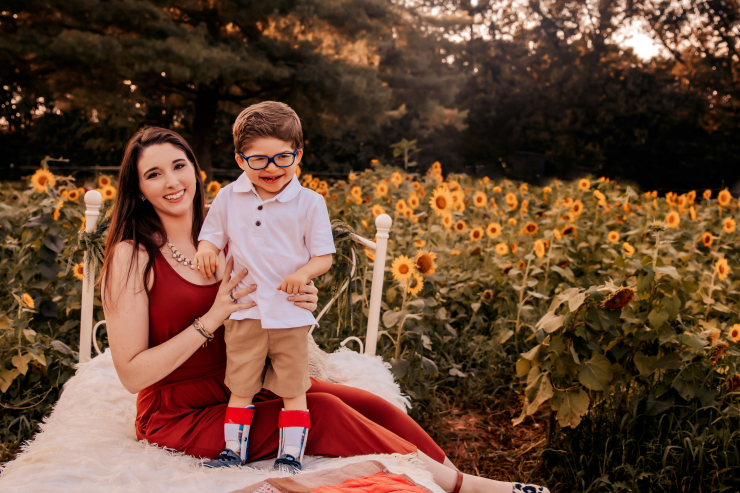 Next year, Eli will participate in his own specialized CME therapy at NAPA Boston, the closest location to Alexis and Eli, but still a pretty substantial distance from home. Because of that, our donors also helped fund a three-week hotel stay for the family. All in all, the impact amount was $7,352. That seems pretty reasonable to get Superman flying again.

It’s no coincidence that our mind is on superheroes. We meet them every week in the form of recipients, their families, and our incredible donors. In the flip of a switch, seemingly ordinary people transform into heroes with exceptional strength and power. Get your cape and join us. DONATE HERE.