Casey was a cool, funny pre-teen with a compassionate heart and a general disregard for authority. She was also a cancer patient. Initially, she was diagnosed with bone cancer but it metastasized to her brain after a few short months. When she showed up at the stables, she was enduring aggressive treatments in a final attempt to save her life. Once Molly found this out, she couldn’t believe that someone would concern themselves so much with saving others’ lives when they were fighting to keep their own. But that was just who Casey was.

Over the course of a year, Molly and Casey became very close. Although she was much older, Molly was inspired by Casey’s perspective on life. “She was pretty extraordinary,” Molly says, “there was just something about her.” Shortly after her 12th birthday, Casey’s cancer took a turn and she suddenly passed away.

Without Casey, there was no more laughter echoing throughout the arena. There was no one to rescue the fallen baby birds and take them home. A dark cloud hung over the stables. Casey had left a void that no one could fill.

Through her grief, Molly had a realization. Being at the stables was Casey’s therapy: she came not because she had to, but because she wanted to. Molly knew the way to honor her friend was to offer the same experience to kids battling life-threatening diseases. She approached the owners and pitched her idea: they would close the stables to the public for one day and invite kids and their families to ride horses, do arts and crafts, and eat pizza. They agreed to it immediately. The next step was to recruit kids. Molly went to the local hospital that treated Casey to post signs and spread the word. Then, all that was left to do was wait.

June 19th, 2004 came and no fewer than 80 people showed up, about 8x as many as they budgeted for. College students volunteered to oversee activities, kids rode on horses and fed them treats, parents relished the sounds of their children’s laughter after so many months of hardship. It was nothing short a “beautiful day.”

But their journey was only beginning. One week after the huge success, Molly got a letter in the mail. David, a 4-year-old brain cancer patient wrote only: “Thank you for the best day of my life.”

So, what had intended to be a one-hit wonder slowly gained momentum into a monthly event for the last 3 years of Molly’s college career. Once she graduated, Molly realized the last thing in the world she wanted to do was get a “real job.” She wanted to do something impactful with her life. She wanted to leave an imprint on others the way Casey had left an imprint on her. The next step was inevitable: turn this tradition into a non-profit for children battling rare diseases, and grow to extend its reach beyond the stables. The name was the easy part. She would call it Camp Casey.

Camp Casey grew beyond what Molly had initially thought possible. They expanded to include three branches of outreach: Horsey House Calls, Cowboy Campouts, and Outlaw Outings. Even with the surge of willing volunteers, the program was stretched thin. But they refused to turn any applicants down. That’s when they reached out for a little help.

Molly’s husband happened to be a Chiver, and urged her to reach out to Chive Charities directly. He’d seen the kinds of work Chive Charities had done with non-profits before and thought we would be eager to help. He was right. Chive Charities came through with a $25,000 grant that will provide 15 Horsey House Calls, 2 Cowboy Camp Outs, several Outlaw Outings, and infinite memories of laughter and love. 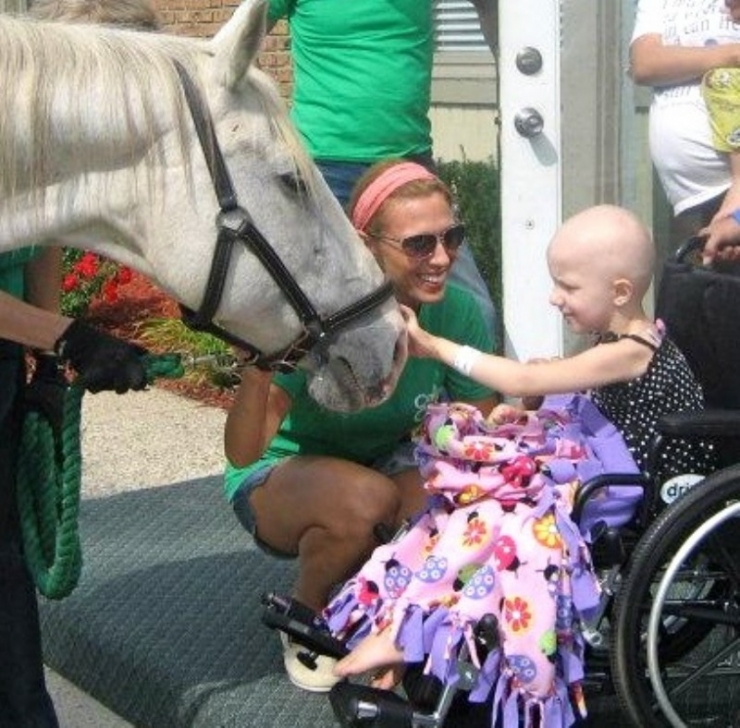 Here's Molly delivering some joy to a very deserving young fighter. Horsey House Calls are made to accomodate any living situation and have flexible hours. They work around treatment cycles and make sure every visit is a surprise. This means calling the parents 10 minutes before to make sure the kids aren't close to any windows to see them walk up. 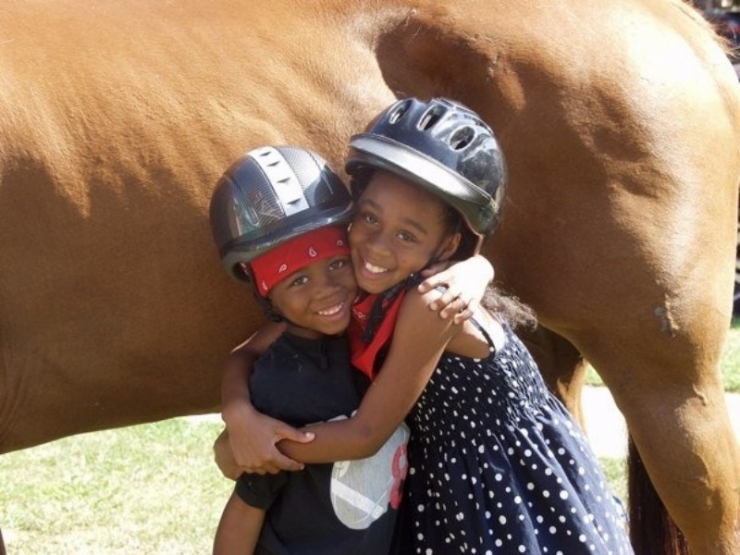 Some sibling love at Camp Casey. This is one of the biggest differentiations between this camp and others like it - they include the family, not only the patient. If you've ever had to fight to save your life, you know you were never in it alone. 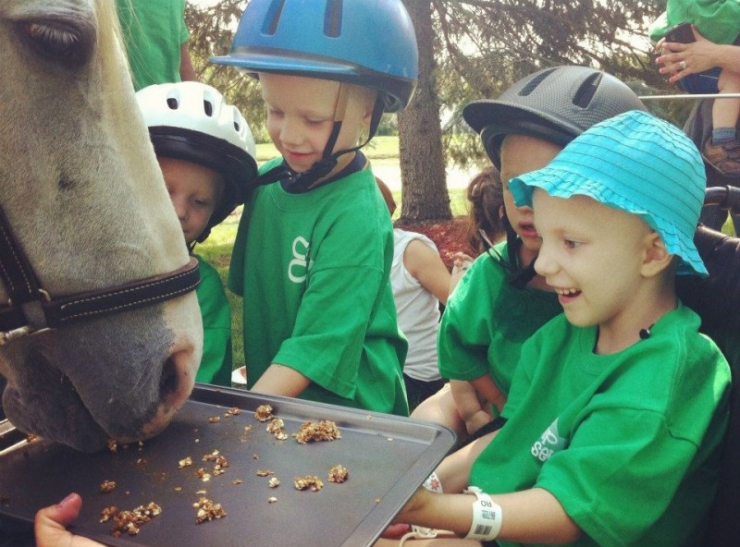 One of the activities campers engage in is making horse treats, and then they get to feed them to these hungry guys. 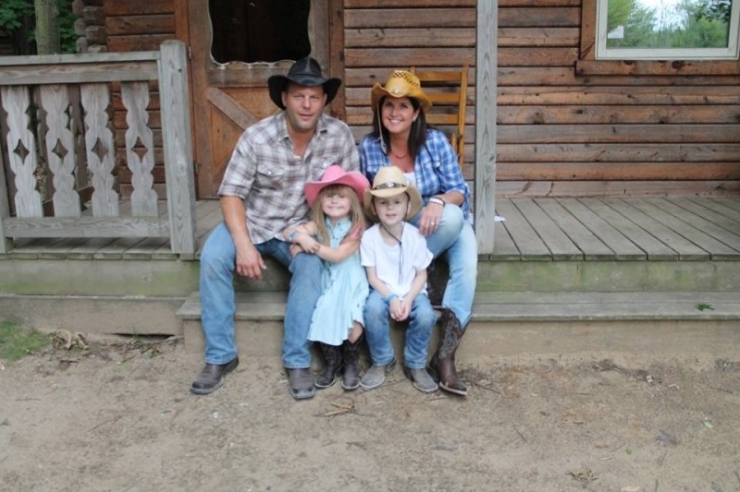 Shortly after this picture was taken, young Mitchell passed away. But the memories his family made with him at Cowboy Campouts will remain close to their hearts forever. 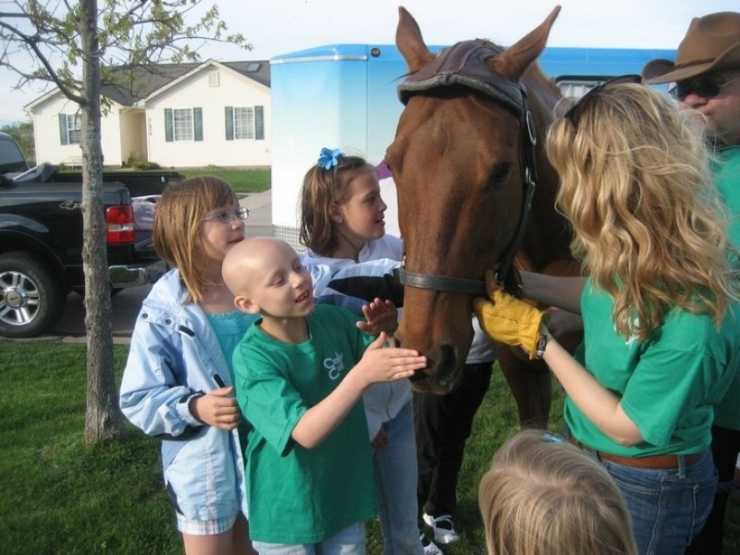 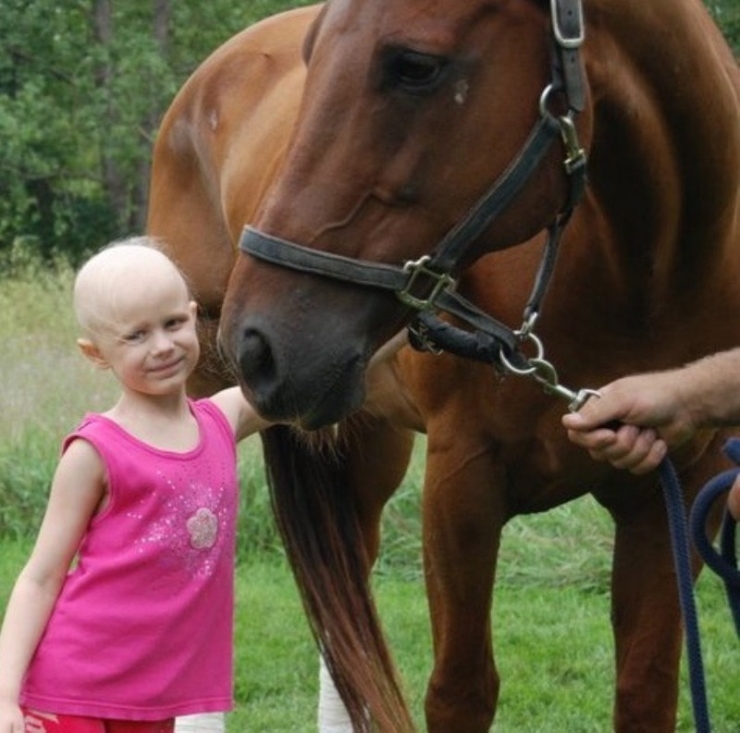 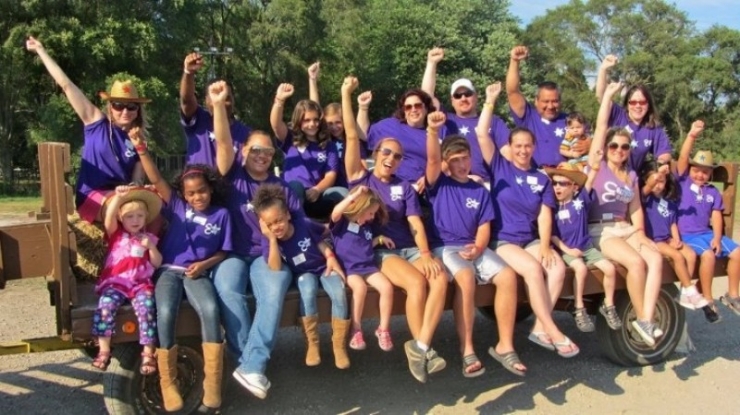 The Cowboy Campouts allow families to enjoy horseback riding lessons, trail rides, camp fires, swimming, tennis, boating and hay rides, all together. They get the added bonus of interacting and connecting with families undergoing similar circumstances. 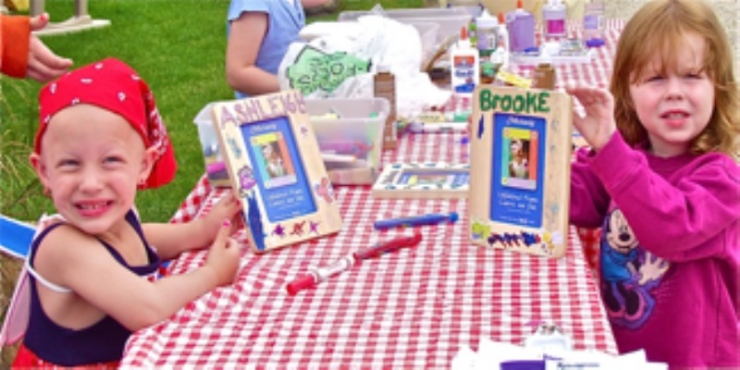 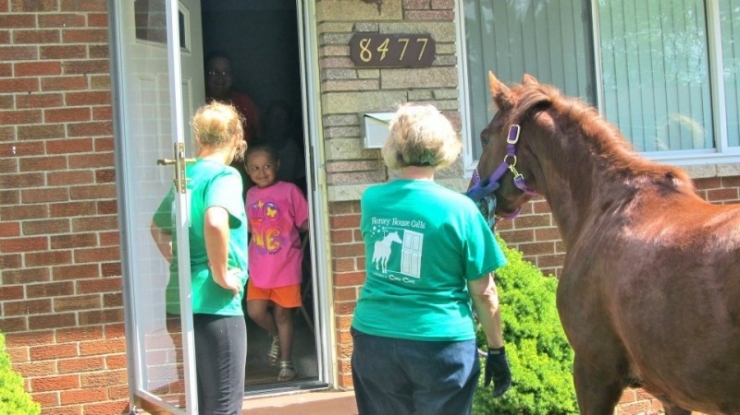 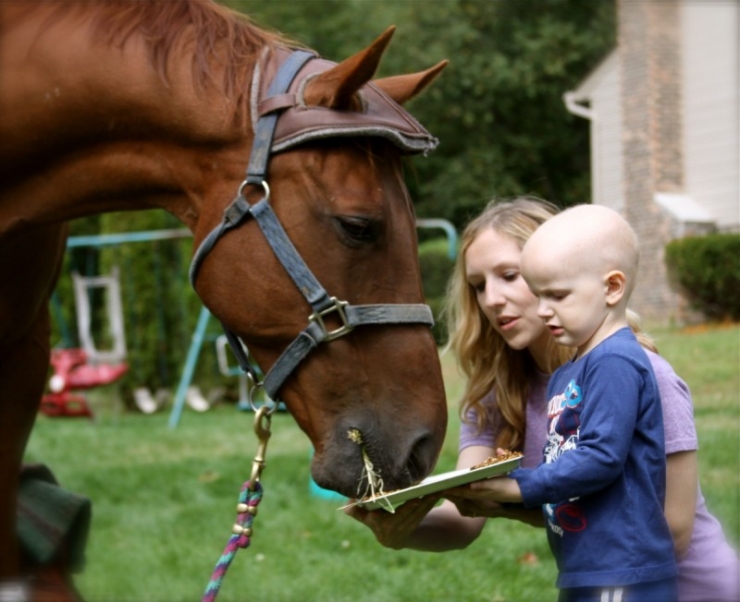 Molly and a young camper share a moment at the stables. She told us when she first saw the grant amount that Chive Charities had donated to Camp Casey, she read it as $2,500. She was so excited she yelled to her husband about what she could do with this money. He walked over and looked over her shoulder and said, "Honey that says $25,000." Molly lost it. She refreshed the page at least ten times before she believed him, and then the entire office broke out in celebration. "We're still grassroots," she reminded us. "We work on a shoestring budget. You have no idea what this means for us."

Molly is very excited about the future about Camp Casey. She has run a successful non-profit for 11 years and has grand-scale ideas about what she can do with the next 11. But she never forgets to look back. She remembers that girl with the heart of gold who sparked within her the person she always was meant to be. She remembers that fun can be a powerful antidote to illness. She remembers that acts of kindness cost nothing- but to the person receiving them- they might mean everything. She remembers this is all because of Casey. Most of all, she knows that the memories made here will be treasured for years and years to come, just like she still treasures hers.

If your child has aplastic anemia, sickle cell anemia, or cancer, and you live in Southern Michigan and want to apply, please contact: programs@camp-casey.org. 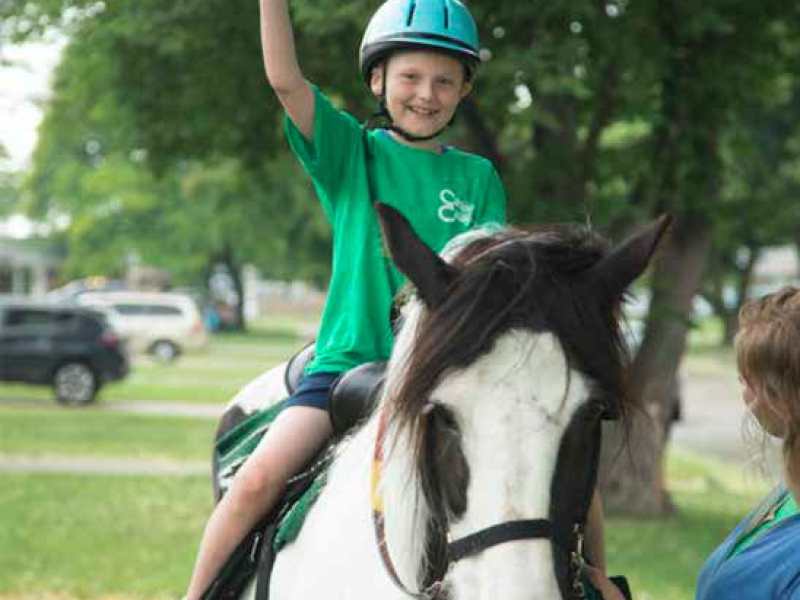 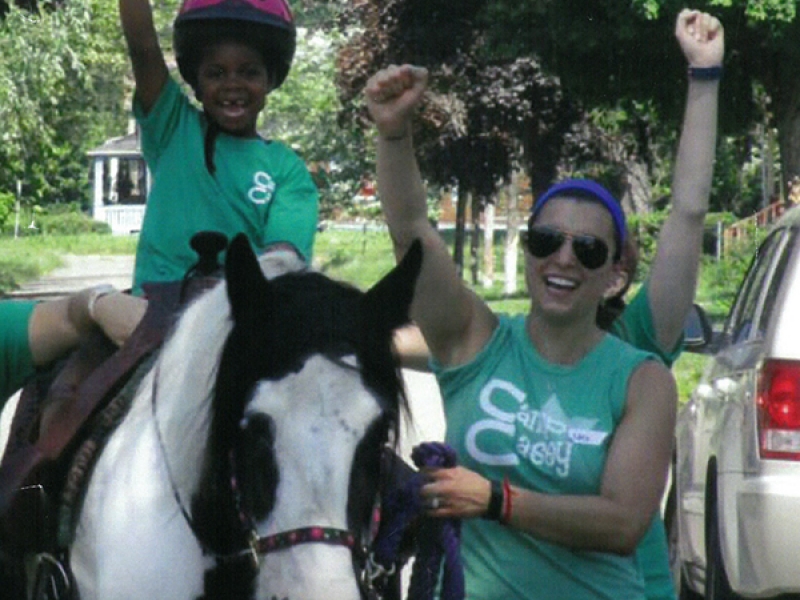 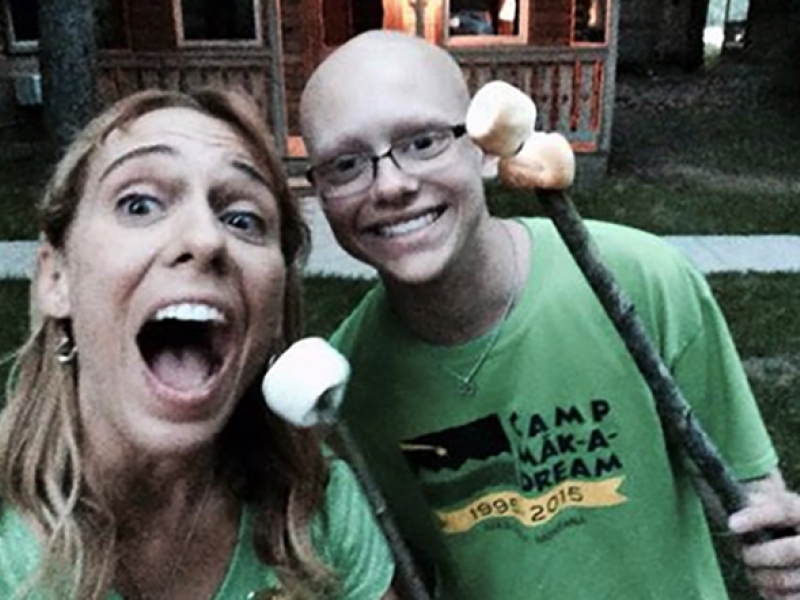