She won't crack under pressure 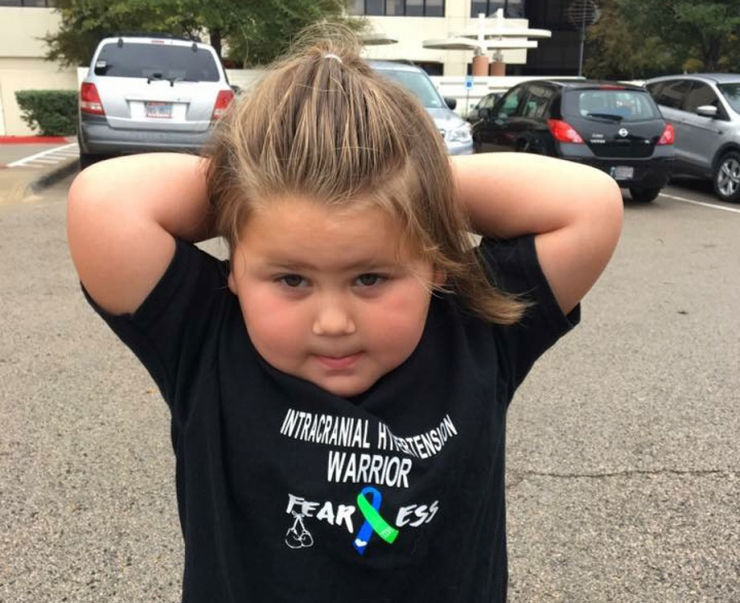 This is her just before walking into the hospital for brain surgery. BRAIN SURGERY. 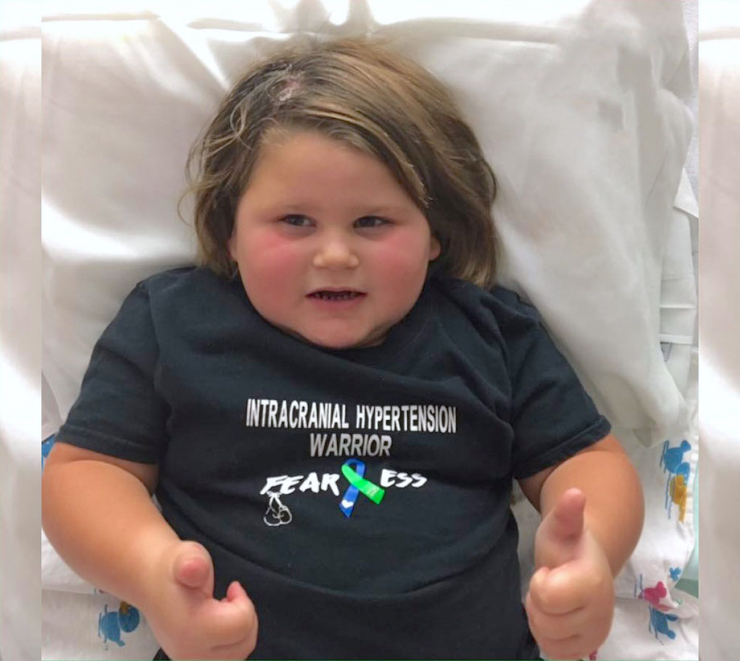 And this is her after. 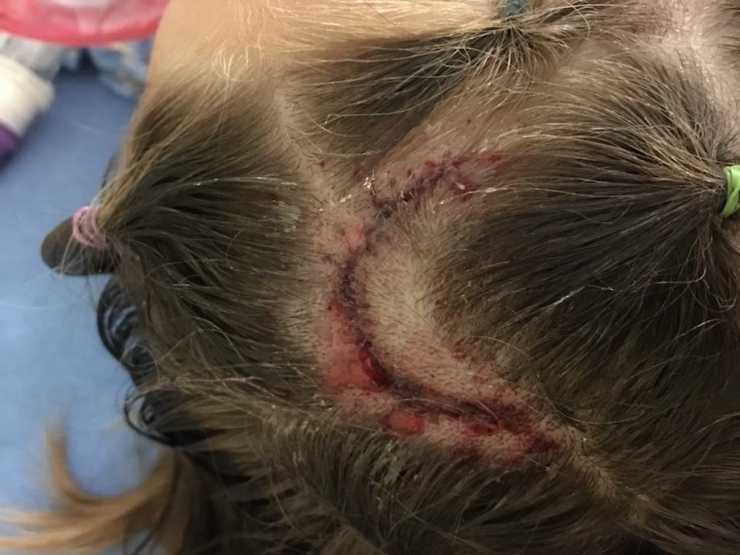 By the way, Alex is five. She was four in these pics and just three years old when she was diagnosed with idiopathic intracranial hypertension (IH). 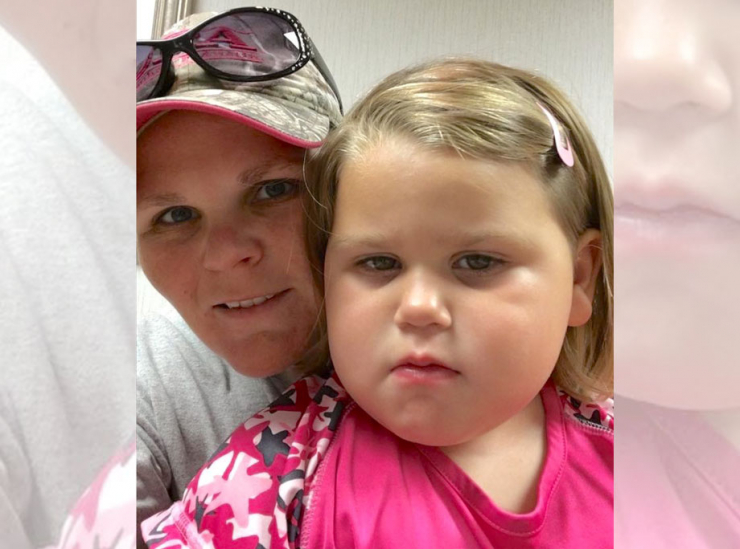 “At two-and-a-half, Alex wasn’t really talking, and she was acting out even more than other two-year-olds,” her mom Brandi told me. They started speech therapy, hoping better communication would improve Alex’s behavior issues. As she learned more vocabulary, she would point to her head and say “ow,” but her parents weren’t really sure why – she looked O.K., she didn’t have any other symptoms. 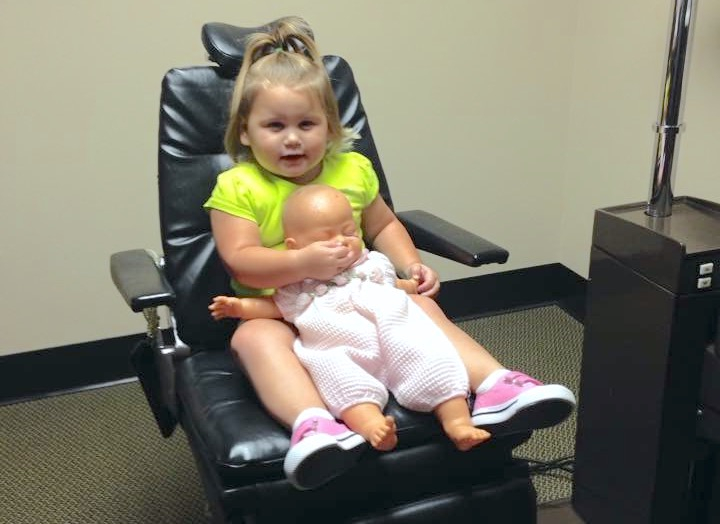 Around that same time, during a routine eye appointment, Alex’s doctor discovered her optic nerves were very swollen, and after that, things just began to snowball. She endured test after test as specialists looked for answers – a sedated MRI, an MRV, a lumbar puncture, the list goes on and on. 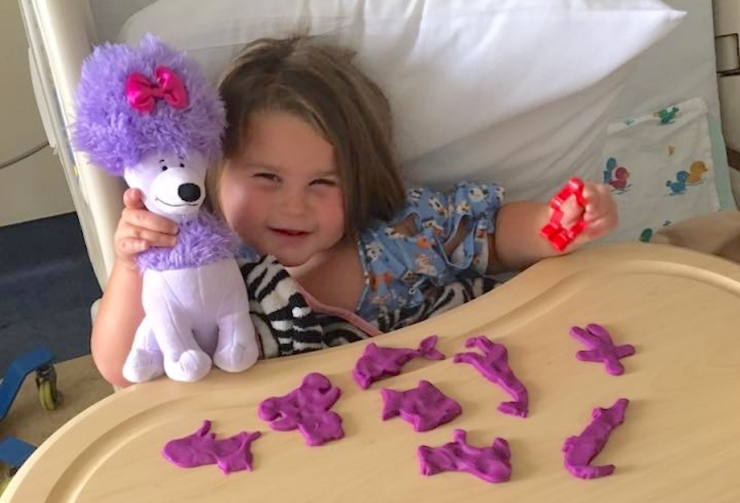 Of course, she took it all like a champ.

After months of testing, the neurologist gave Alex’s parents some shocking news.

“She told me Alex’s body was producing too much spinal fluid, that the ventricles in her brain were over-full and she had an excess amount around her brain. That it was causing her cranial pressure to be extremely elevated and her optic nerves to swell. And then,” Brandi said quietly, “she explained Alex has idiopathic intracranial hypertension. It felt like the world had stopped.” 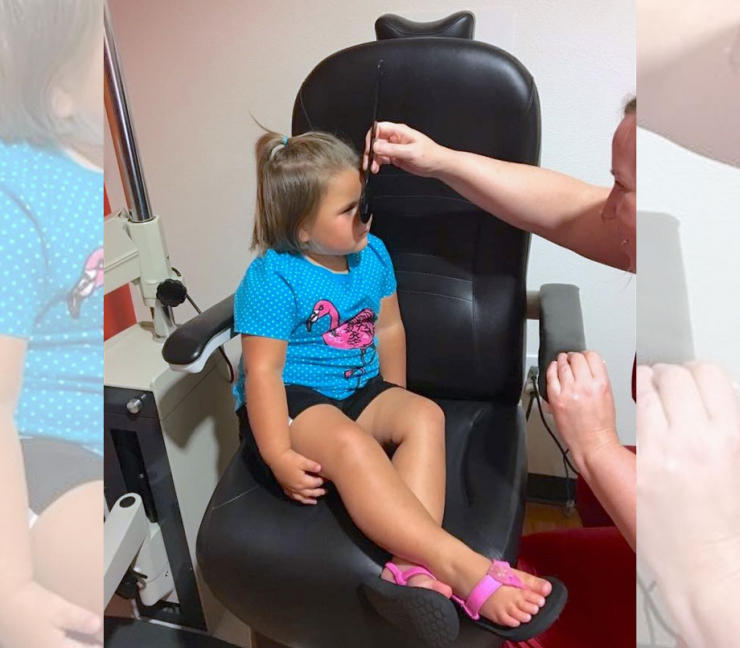 IH in kids is rare. It causes delayed speech, severe headaches, swollen optic nerves, blurred or double vision, tinnitus, blindness, and hearing loss. It can be treated with medication or surgical procedures to relieve pressure, but right now, there’s no cure.

Alex was under three years old when she was diagnosed. Her parents just couldn’t imagine subjecting their toddler to major surgery, so they went with the medication. 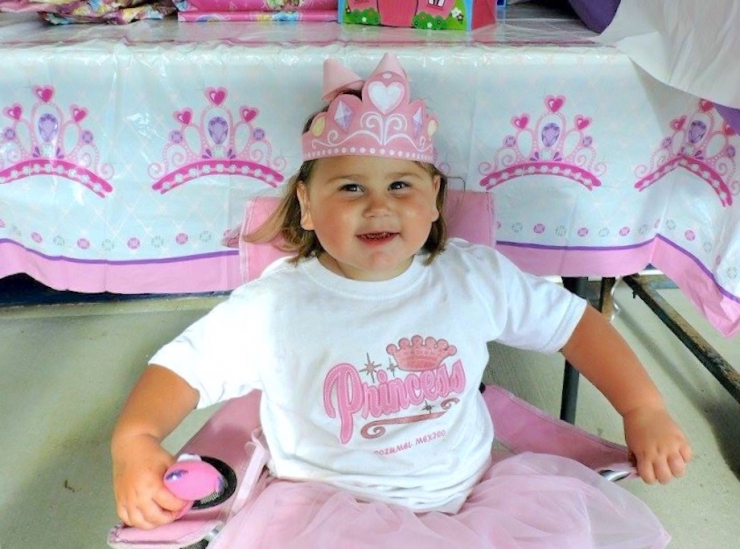 “What does IH look like for Alex?” I asked Brandi. The pictures I’d seen were of a smiling, precocious, adorable little girl, but you and I both know pictures never tell the whole story. 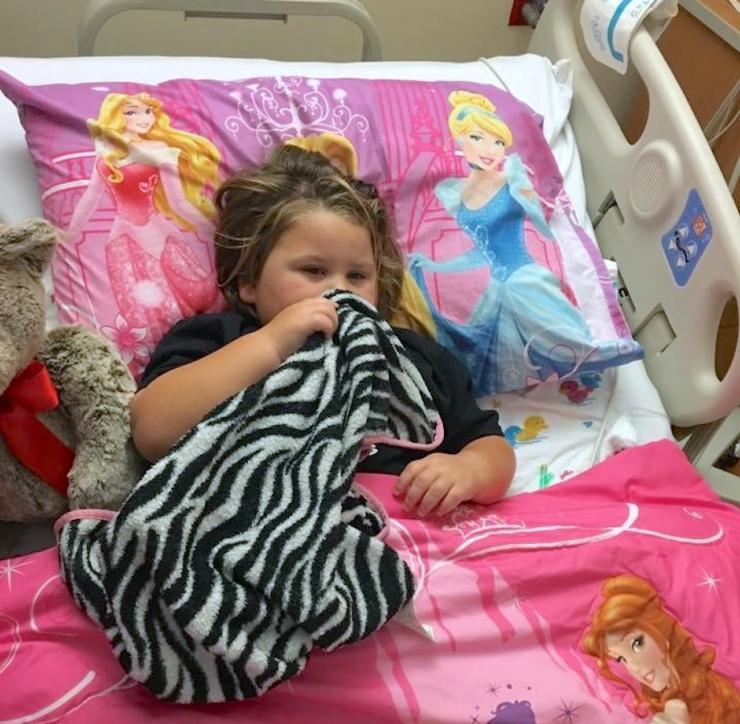 “She cried constantly, and told us her head was hurting. She would come home from school, crawl in bed, and hide under her blankets. She couldn’t go outside, couldn’t ride her bike, couldn’t play with her brothers. It affected her moods and her behavior,” Brandi said, adding, “She was always in pain.” 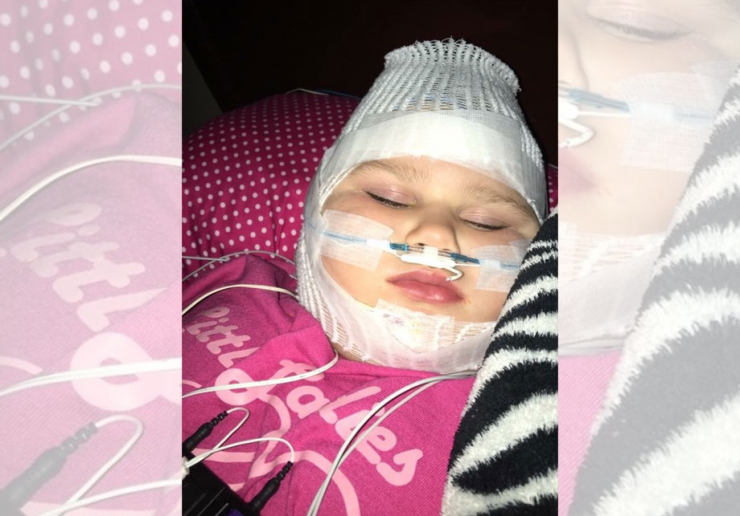 The medications doctors prescribed for Alex didn’t help – her system just couldn’t handle it and things were getting worse. So on November 7, 2016, Brandi and her husband Benjamin handed their little girl over to surgeons at Medical City in Dallas, Texas, who implanted a VP shunt in Alex’s skull to drain excess fluid and regulate the pressure in her head. When she woke up from the anesthesia, Alex’s first words were, “I have headache no more!” 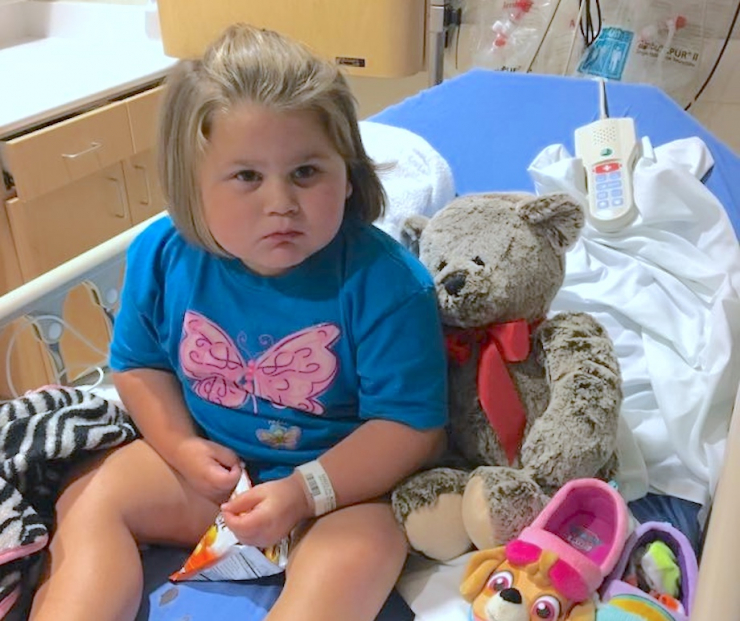 Life after surgery has been a lot better for Alex, but it hasn’t been perfect. She’s had two shunt revisions – one after her incision became infected and another when she fell off a playground slide onto just the right spot. Now, Alex is learning to be much more cautious at play, which is great for preserving her health but kind of stinks if you’re a kindergartner with energy to burn. She knows she needs to protect her head and has no issue whatsoever telling everyone around her to watch out for her “smart button.” 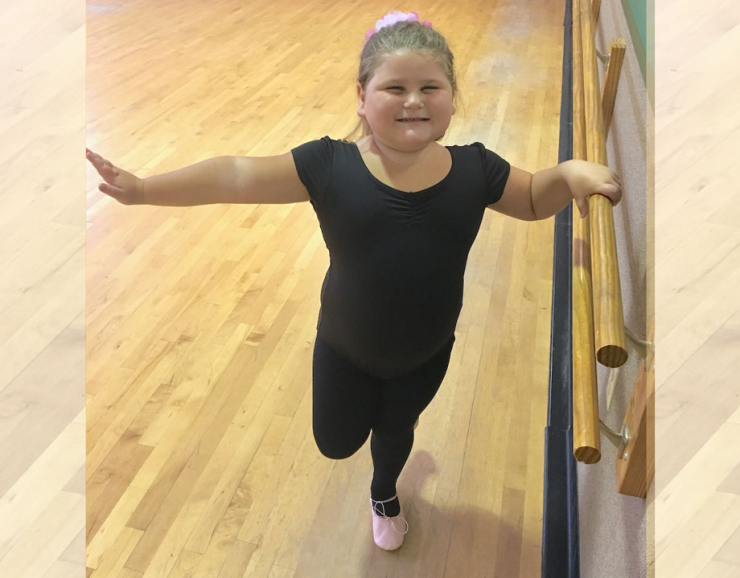 But there’s no question Alex feels dramatically better. Her speech is progressing well, she’s working hard in physical therapy, and she’s even back in dance class, which she l-o-v-e loves. Still, the pressure in her skull fluctuates daily, and sometimes it’s just too much to bear.

If you’ve ever had a migraine, a stress headache, or perhaps a monster hangover, you know how rotten it feels. Alex is just a kid; she deserves a great childhood without IH darkening every day, so Chive Charities wanted to help. Brandi gave us a few ideas. 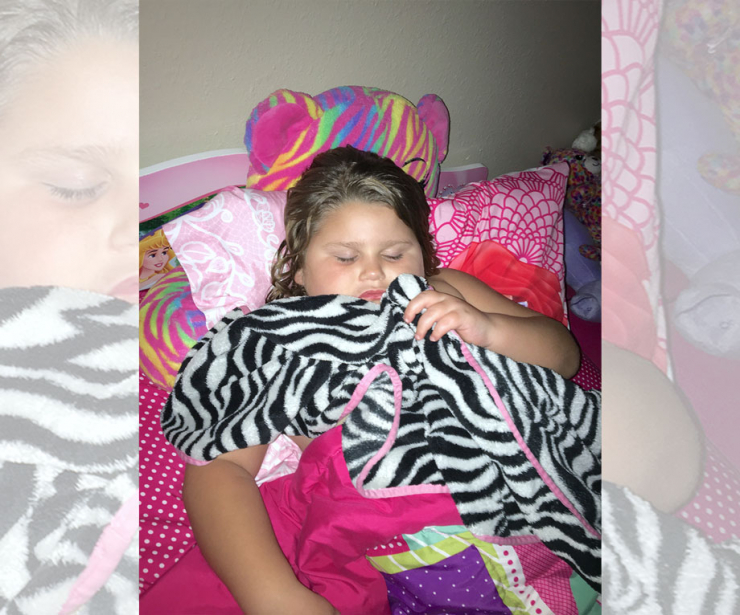 Alex sleeps propped up and surrounded by pillows to prevent shifting pressure and the resulting pain and nausea, so we purchased an adjustable bed to give her a good night’s sleep and an even better morning. 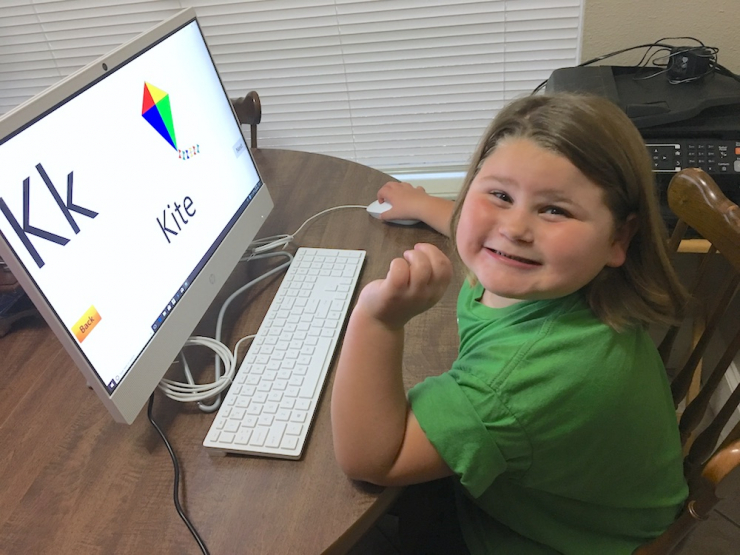 IH has caused her to fall behind in school, so we purchased a new HP All-In-One computer to help her catch up and stress less about her education. 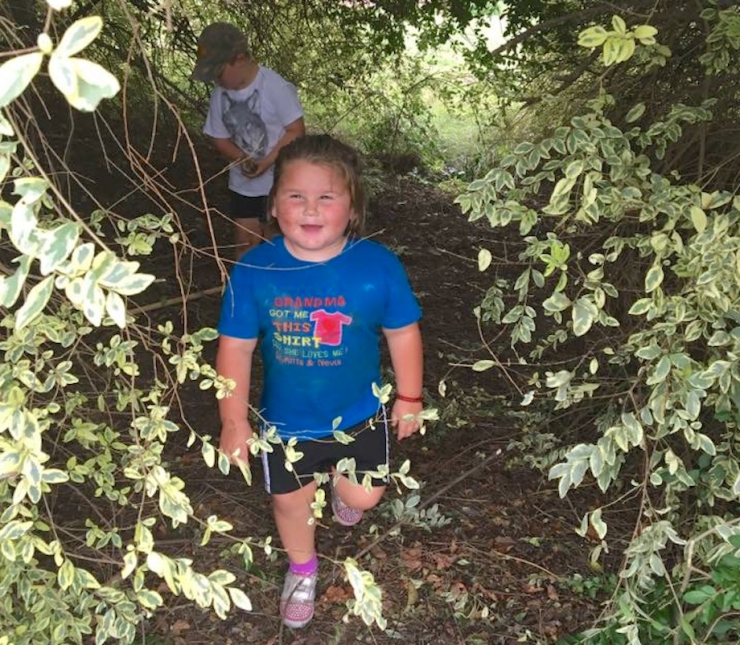 And playtime, well, that’s hard. She’s a kid, she wants to play and do kid things, but her muscles are weakened by her condition, and she’s already fallen and displaced her shunt once. So Chive Charities purchased a rad new playscape to give Alex a safe place to build strength, polish her safety skills, and have some fun. Because that’s how it should be. Alex’s grant totaled just over $4,000, and it was worth every penny. 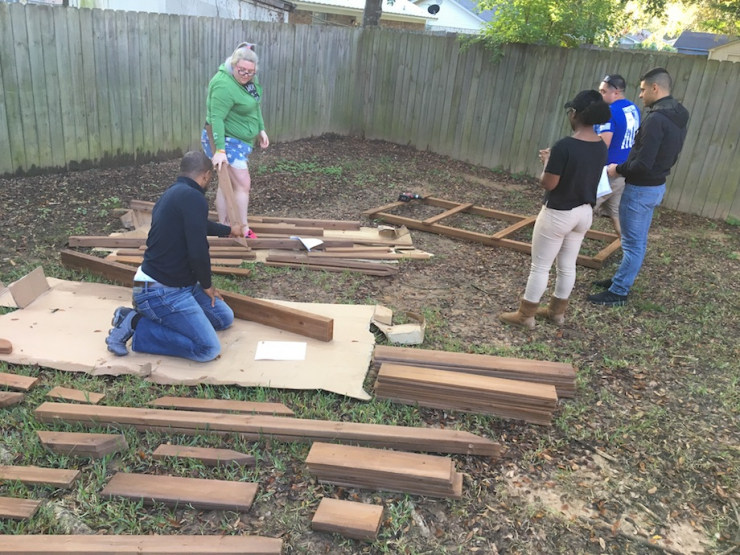 But wait, there’s more! Chive Charities is backed by the best community in the world, so when Chive Nation chapters in DFW and Shreveport/Bossier City heard what we were up to, they jumped in to help. 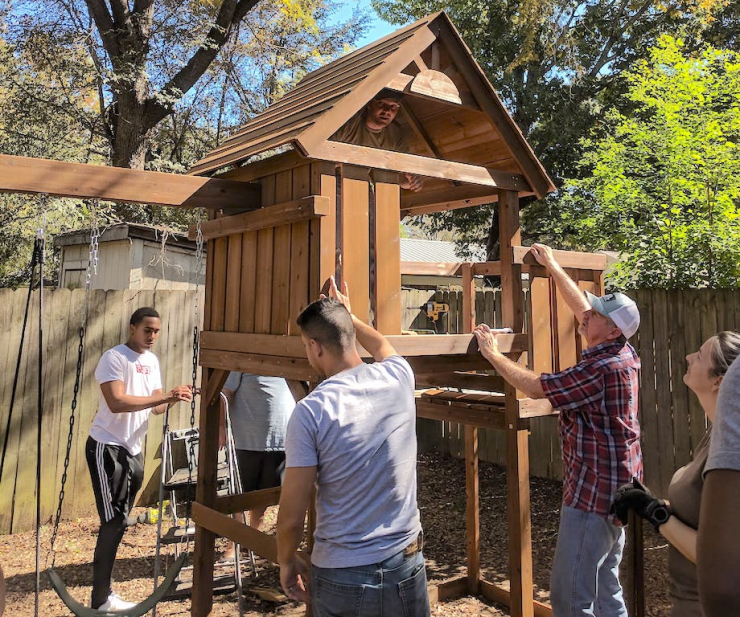 Last weekend, a whole mess of them descended on Alex’s house near Tyler to put together her new playscape. 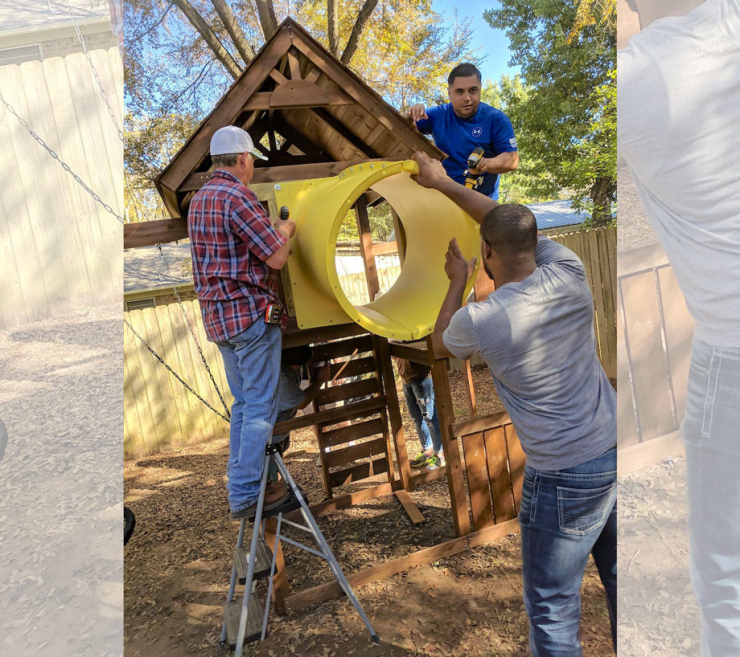 They worked, they played, they swang (swung? schwing?), they ate pizza, and they showed Alex and her family what our community is all about. We really are one big happy, occasionally dysfunctional, big-hearted family. We love you guys. 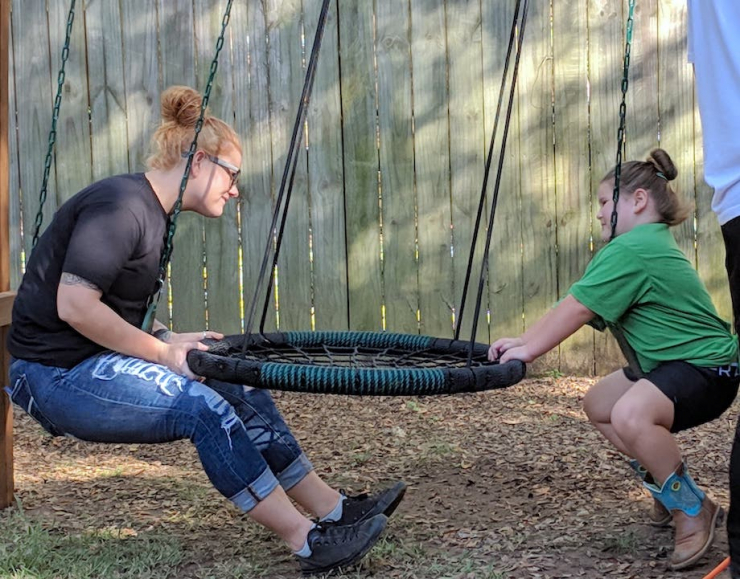 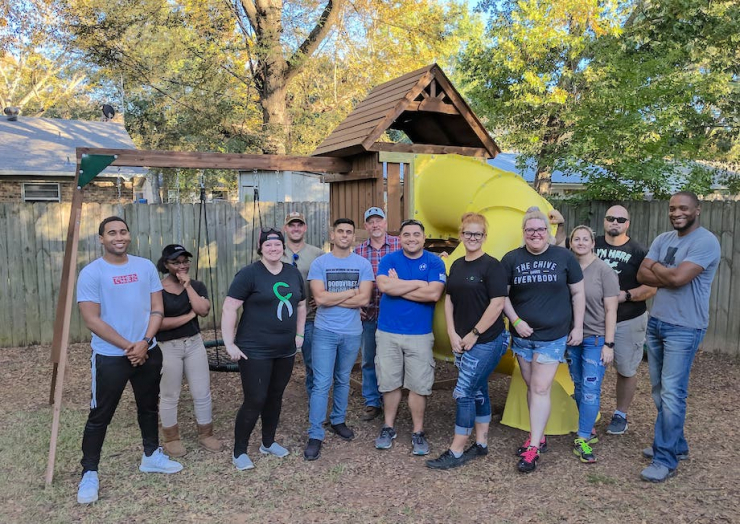 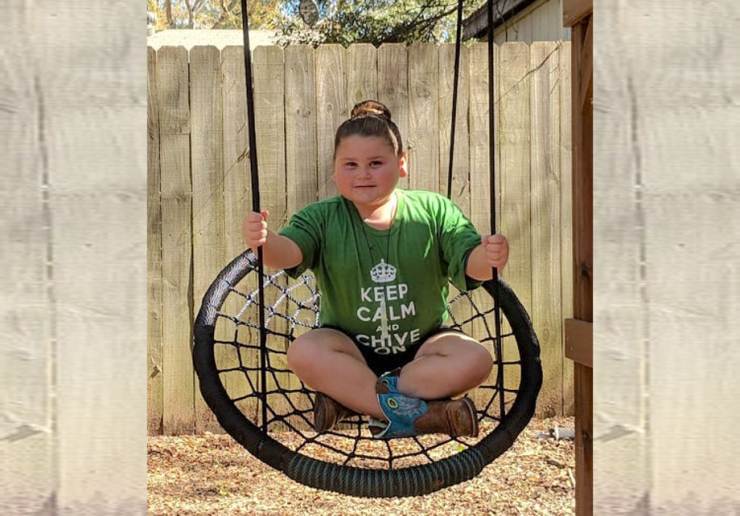 If you haven’t signed up to be a Chive Charities monthly donor yet, head over HERE – you can be the one to make childhood meaningful to more kids like Alex, plus there’s cool swag involved...who doesn’t love that? 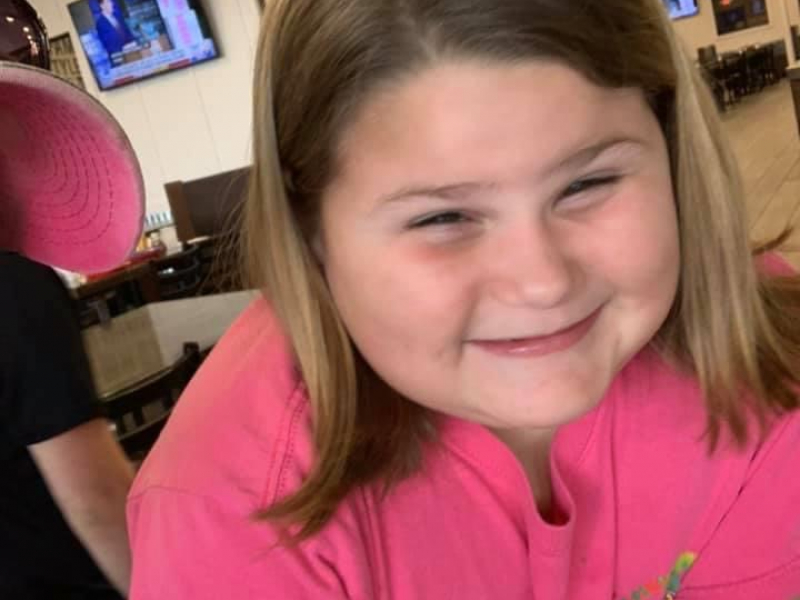 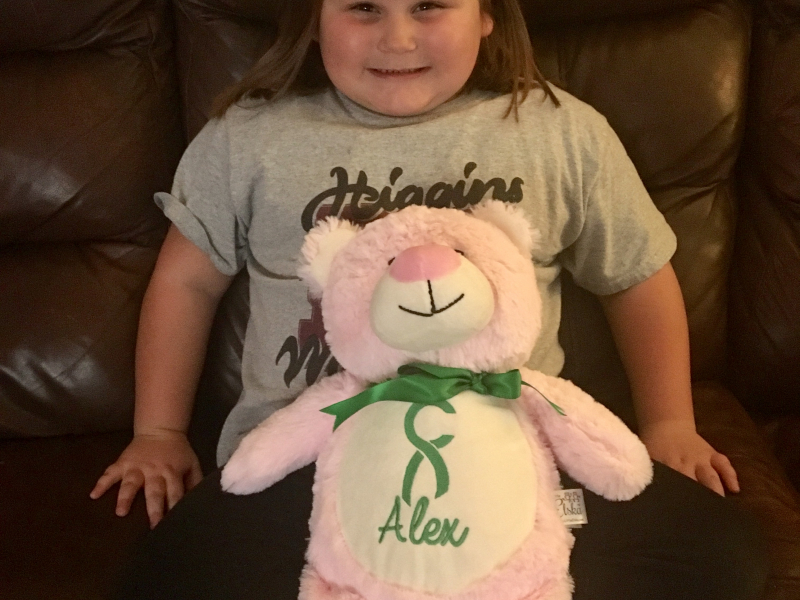