As fate would have it

In hindsight, the events that led to March 5, 2020 were stacked upon each other like a deck of cards with a predetermined ending. Long before Randy was laying in the snow with his leg awkwardly folded up to his stomach, a series of experiences played out so synchronously, you would call it fate.

It started innocently enough, as these things do. Randy joined NorthWest trails, a local snowmobile club near his hometown of Corcoran, Minnesota. He was good at it and had a natural inclination for teaching, and in less than a year, he became the lead instructor, setting up and leading several classes on snowmobile safety. We’ll call this part “foreshadowing #1.” 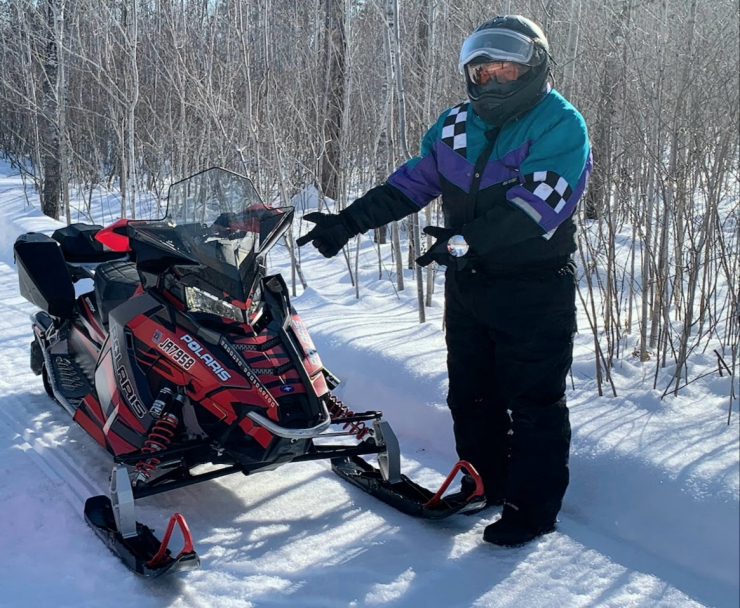 Every year, Randy had a pretty amazing tradition he shared with his grandkids. When they were fully potty trained (“I was not dealing with diaper changes,” he laughed), Randy would take them to an area north of Duluth called the Boundary Waters and camp, canoe, and just disconnect from the outside world.

On August 20, 2011, Randy was there with his three grandchildren during the Pagami Creek fire, a devastating wildfire that would become the largest naturally occurring fire in Minnesota in more than a century. They saw many firefighters in the area and his granddaughter stopped and asked one of them why she chose that profession.

“Her response rings in my ears today,” Randy told us. “She said she wanted to get medical training so she might be able to help herself or someone in her family if they were hurt. I asked how I could get started and she told me what to do.” 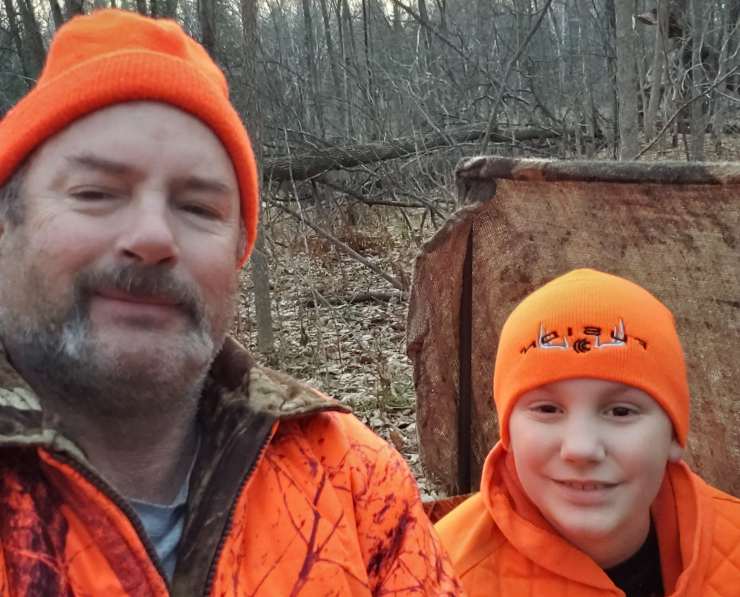 Four months later, Randy joined the Hanover Fire Department and received his firefighter I and II certifications. The following year, he received his Emergency Medical Responder certification and would continue to expand his training to include something called “Stop the Bleed,” a critical program aimed at saving the lives of people who are severely bleeding. We’ll call this part “foreshadowing #2.” 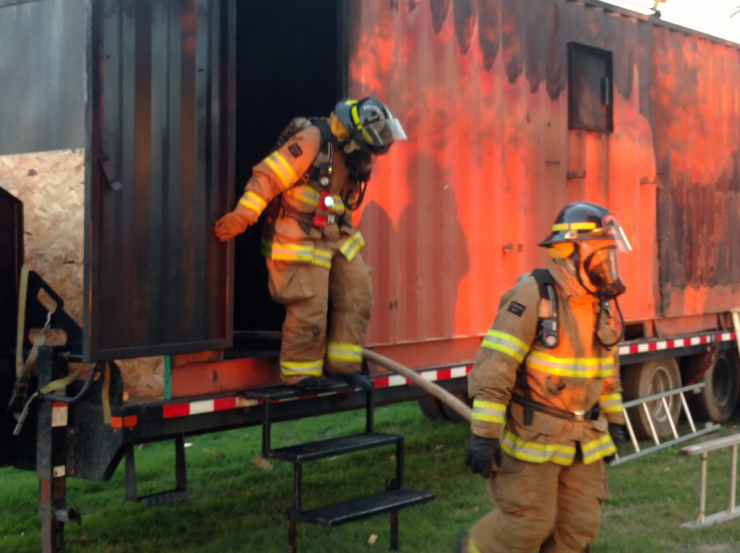 Those cards that were so neatly stacked - Randy’s love for snowmobiles, his experience instructing others on safety operations, his new-found career in firefighting and emergency medical response, his teaching of “Stop the Bleed” classes - they all began to fall, a domino effect that stopped on a snowy trail in Northern Minnesota last March. 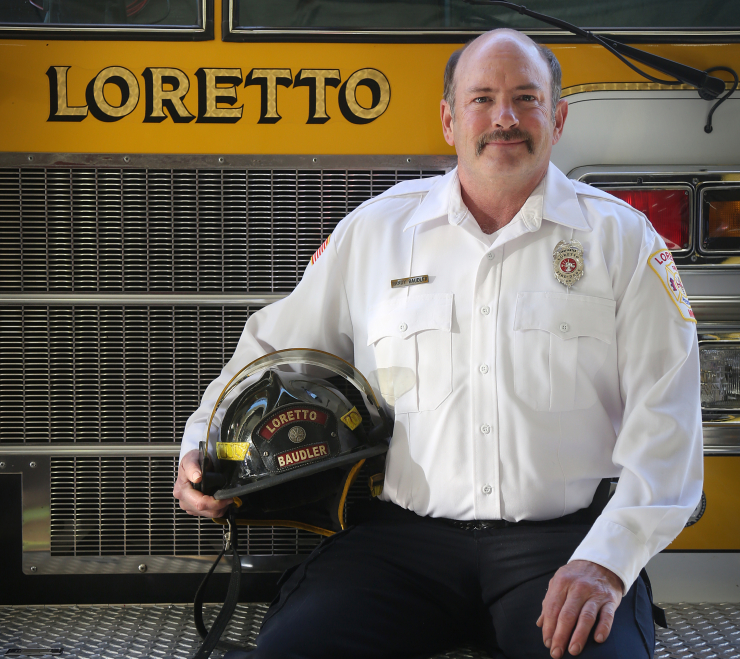 “We had been out for about three hours already when we came upon an unmarked turn in the trail,” Randy said. “I was blinded by the sunset and going too fast when I hit a patch of ice, tossing me from my sled. I found myself lying face down in the snow with my foot tucked up against my stomach.” 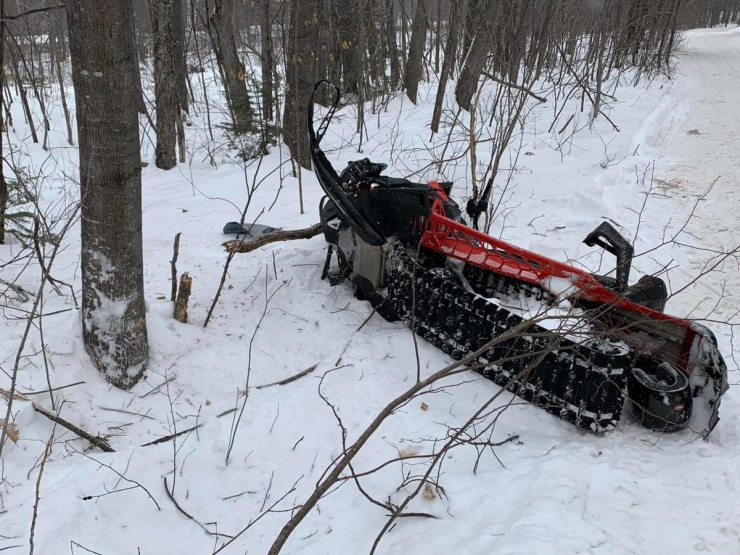 Randy knew immediately that his injury was catastrophic. His medical training pushed all other thoughts aside (excruciating pain, fear, hopelessness that he might not see his newest great-granddaughter ever again…) and he began to work quickly. 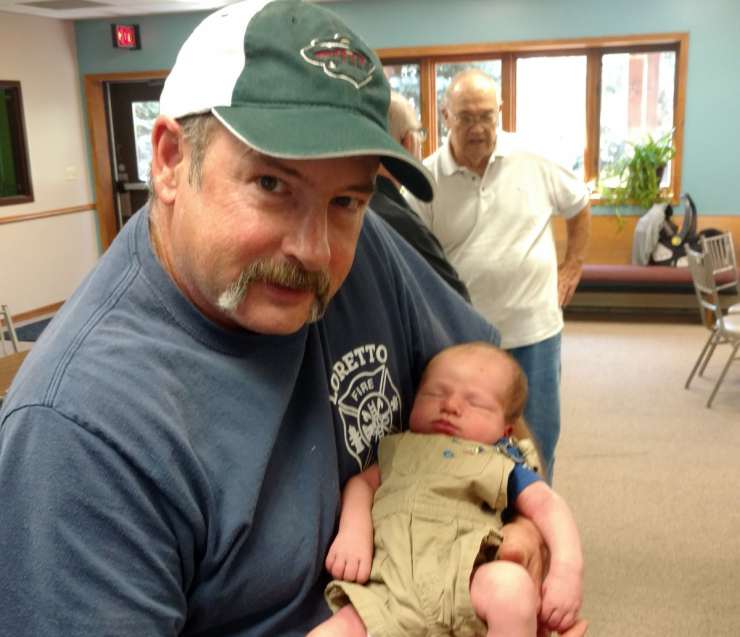 “My friends were way ahead of me and I knew I would need to save myself,” he recalled. “I managed to get my cell phone out of my front jacket pocket and called 9-1-1. The dispatcher located me pretty quickly on the trail and sent rescue, but I could feel blood rapidly pouring out of my leg.”

Randy made one other call, a brief and hurried conversation with his wife in which he told her his leg was broken and the rescue team was on its way to help. He hung up without giving any other detail, not knowing if it was the last time they would speak.

Randy’s decision less than a year earlier to enroll in “Stop the bleed” training saved his life on the trail that day. He kept his thumb on the exposed artery that was pulsing with every heartbeat until the rescue crew could locate him. When they finally arrived, Randy fashioned a tourniquet from someone’s belt and pulled it so tightly, he thought he might pass out from the pain. 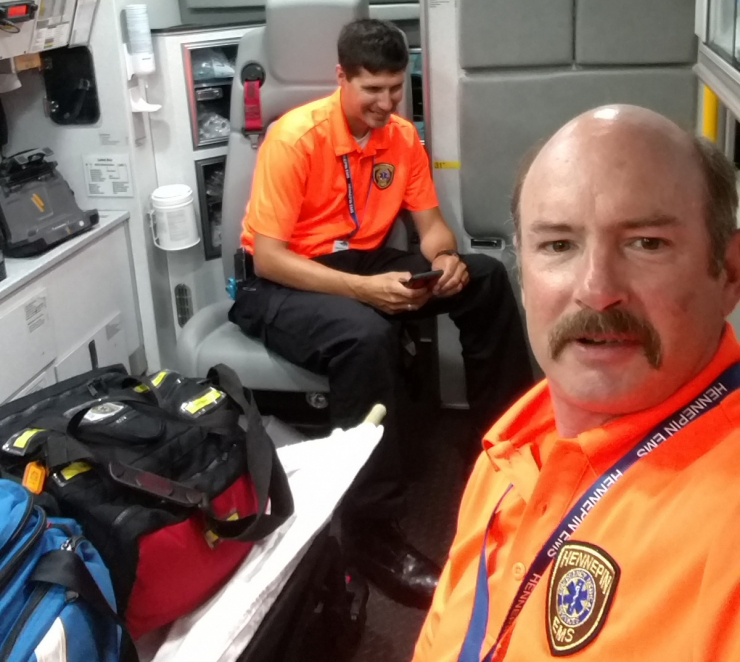 “In my training, we learned that the pressure of the tourniquet can be more excruciating than the injury itself and that was the truth for me,” Randy said. “Several times on the way to the helicopter, I had to ask them to stop and tighten the belt when I felt more bleeding, and it was all I could do to stay conscious.”

Randy made it to the helicopter and woke up on a gurney with his wife, Sue, and daughter, Sarah, standing next to him. His first prayer had been answered: Randy was alive.

The doctors explained that the break had caused a lot of damage, but Randy’s leg could be reattached. It would, however, take many surgeries over many months and there was no guarantee that he would ever walk again. The alternative was amputation. With it, he could get a prosthetic leg and would likely be up and walking again in six months.

“I knew I could get back to work faster with an amputation,” Randy said. “I chose plan B.”

In true brotherhood fashion, the entire fire department showed up at his hospital room to check on Randy and wish him well. It’s a good thing they came when they did, because just four days later, Randy was released to go home under his wife’s care.

Fate might have dealt Randy a tough hand, but fate didn’t know the kind of person it was dealing with.

It helped that he had an incredible support system, and on his first day home by himself, he received a surprise call from Rob Rieckenberg, a fellow leg amputee and board member of a past Chive Charities recipient called Wiggle Your Toes.

“He said, ‘Well, there are some benefits to this, Randy. You won’t have to worry about stubbing a toe anymore.’ He really had me laughing right from the beginning,” Randy said. 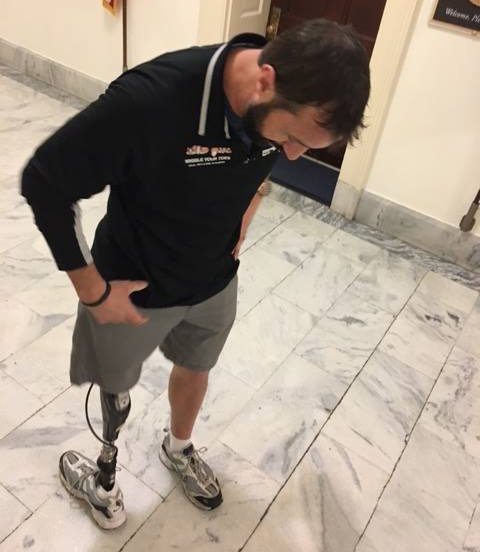 Just six months removed from the accident that took his leg, Randy put on his prosthetic, got into his uniform, and went back to work with the fire department.

Pretty quickly, though, he discovered one problem that he couldn’t tackle himself.

“Taking a shower was a nightmare,” he told us. 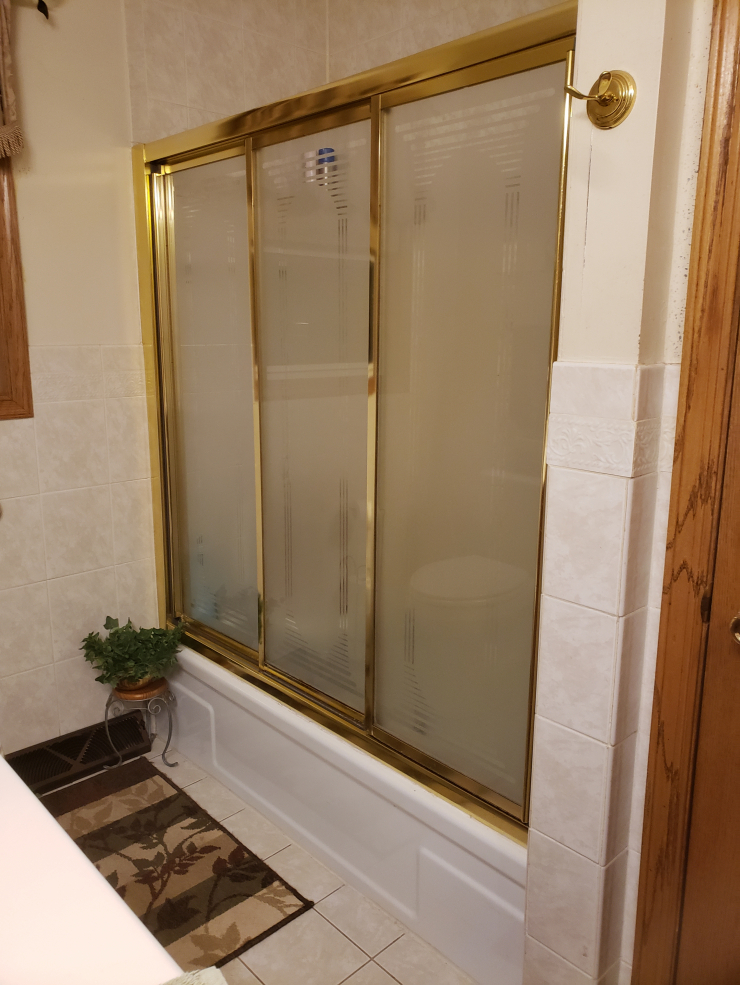 Getting in and out of his shower/bath combo was exceptionally more difficult than it had been pre-injury. While he had a shower seat, it was slippery and dangerous trying to swing his leg up and over the side of the bath to get to it. 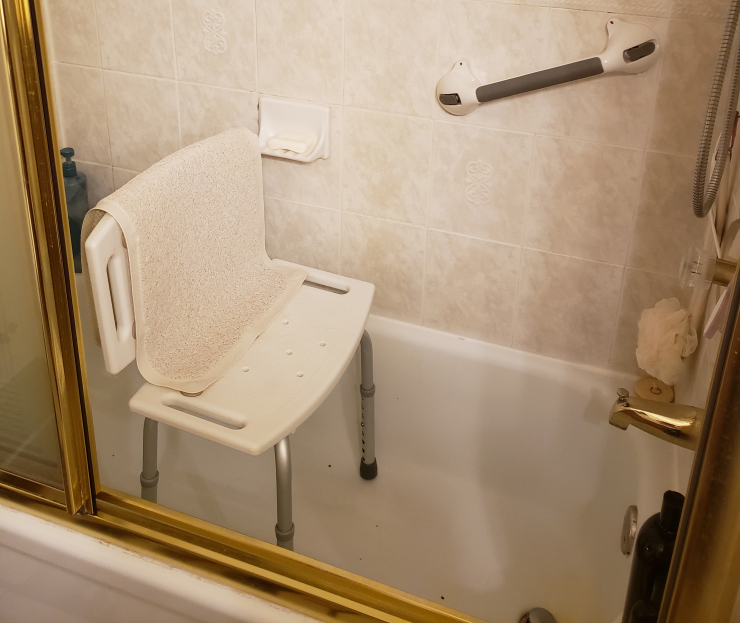 Chive Charities wasn’t going to let that derail someone who had overcome so much. If Randy could go back to work as a firefighter - prosthetic leg and all -  we could at least help make his bathroom more accessible.

Through our Green Ribbon Fund (which you can join HERE), Chive Charities was able to fully cover a bathroom renovation for Randy to the tune of $23,989.

John Resig had the privilege of sharing the news with Randy a few weeks ago. Unsurprisingly, his entire fire department was right there with him, just as they had been at the hospital in the days after his accident.

How incredible is that? From near-death on a snow trail to back at the firehouse with his peers - Randy deserves every second of it. 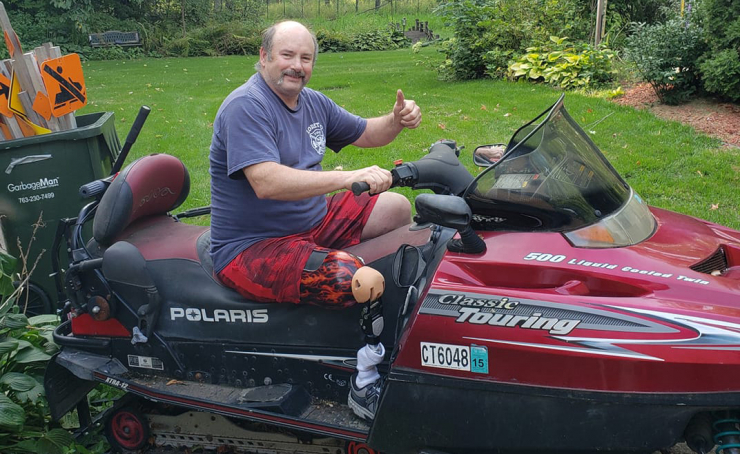 As fate would have it, Randy also happened to meet a community of supporters through Chive Charities who donate every month to provide life-changing grants for veterans, rare medical individuals, and first responders just like him. Something compels them to pay it forward and help those in need, just like something brought you to this page today to read his story. There’s got to be a reason, right? DONATE HERE.

If you or someone you know is a first responder who could benefit from a life-changing Chive Charities grant, please visit ChiveCharities.org/outreach/first-responders to learn more and apply.