There are some things people just don’t like to talk about. Money, politics, past relationships, pineapple on pizza…all high on the list of topics to avoid. For the record, I’ll talk all day long about why pineapple doesn’t belong on pizza, but this isn’t about me. 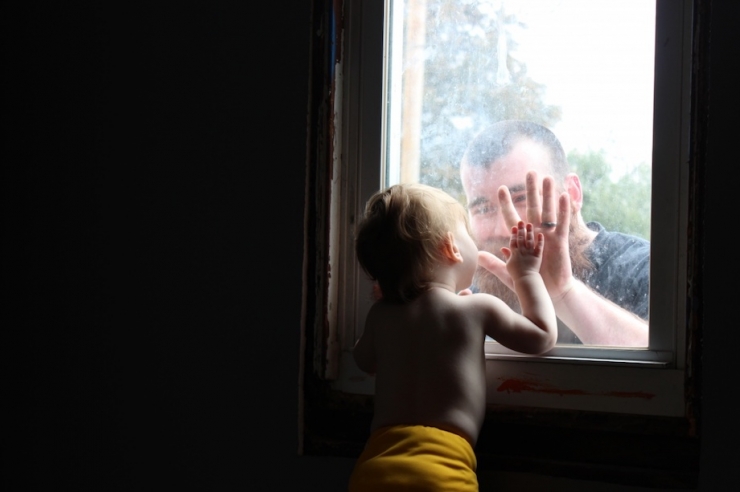 Despite pop culture efforts to make therapy appointments on par with getting a physical, mental health is still considered taboo in polite conversation. This makes no practical sense if you think about it, because we can’t control brain chemistry any more than we control blood type. Therapy is kind of a dirty word, even though most people would benefit from talking through their feelings with a licensed professional. Asking for help doesn’t make you weak, it makes you human. 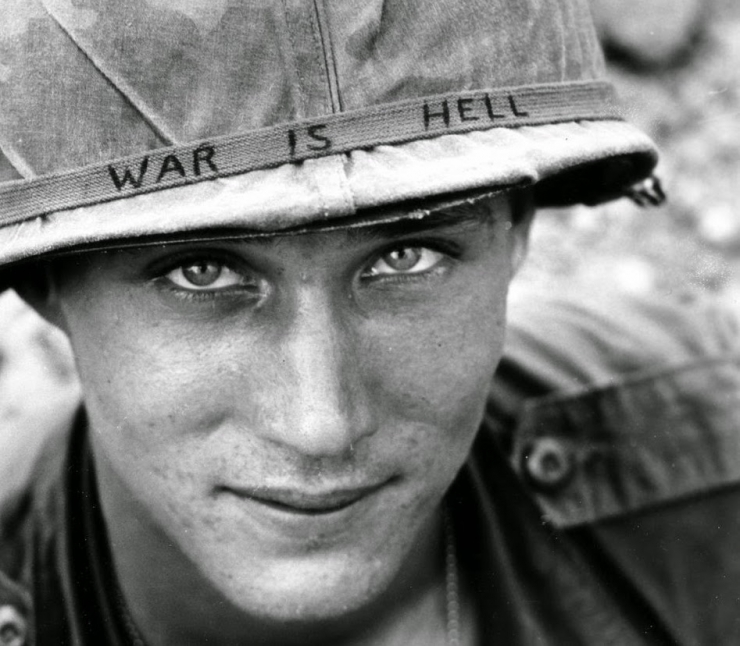 Somewhere between 11 and 20% of U.S. veterans experience post traumatic stress (commonly referred to as PTSD). Anyone can suffer from PTSD, but more and more, we hear the term associated with combat veterans. They deploy with bright eyes and big expectations, and can return physically and emotionally battered. General William Tecumseh Sherman said it plainly in 1879, “War is hell.” 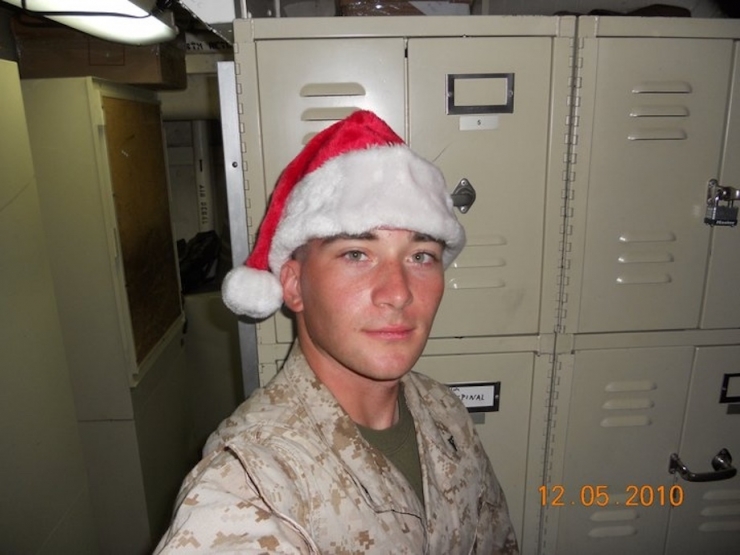 Chris joined the Marines just after he turned 18. He was a quiet kid with a gentle spirit, and he enlisted so he could change the world. His eyes were bright, his intentions admirable. An optimist with a healthy side of pragmatism. He completed two tours in Afghanistan before his 21st birthday and was honorably discharged shortly after.

By his own admission, processing the things he saw on deployment was hard. “I was constantly facing an internal struggle between the commitment and honor of my country and the sights that I was seeing daily. It was hard for me to find a moral balance. I worked each day to push my conflicts down and focus on my job.”

Veterans are perceived as tough, stoic, the definition of “warrior.” Badasses who don’t need help processing their feelings. They see themselves that way, too, and there hasn’t been a big push in the military to ask for help with this or any other mental health issue. This is a problem.

I’ve interviewed a lot of veterans, and more often than not, telling their story is as cathartic for them as it is useful for others to read. Chris called it “getting the story out and out of his head,” and I call it raising awareness. We both hope this story removes the stigma associated with asking for help. 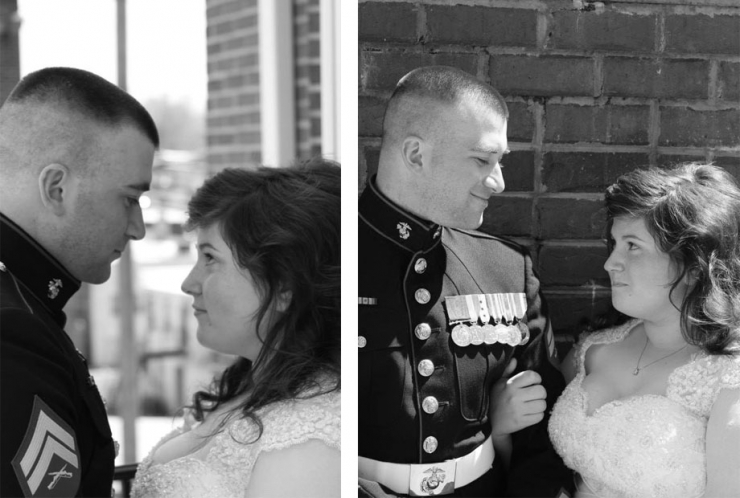 Leaving the Marine Corps in 2013 was hard. The life Chris knew before he enlisted was gone, and adjusting to his new normal did not come easy. He bought a truck, started trade school, met a girl (Alexa), and pushed his troubled feelings deep down. Things began to fall apart.

“I didn’t anticipate the problems I would have adjusting to civilian life. I thought I was going to finally be able to forget the feelings I tried to push out of my head, but that couldn’t have been further from the truth.” 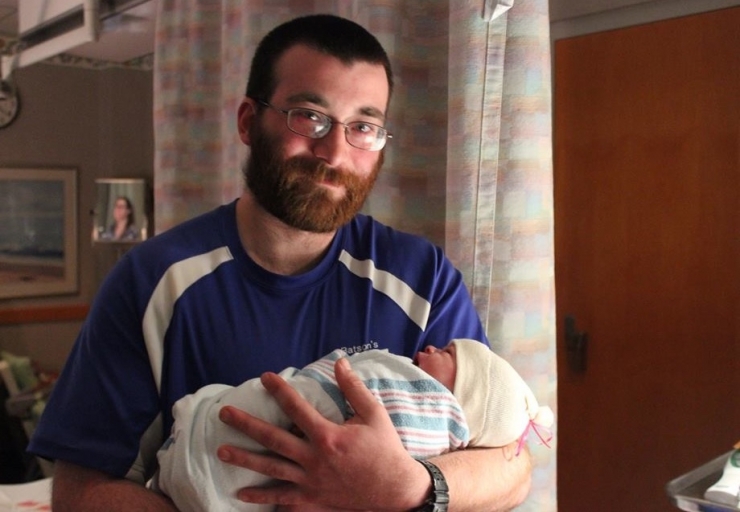 That sweet little bundle is Isabelle, and she was born in December 2015. Her arrival was the bright spot in an otherwise very dark time for her father. Chris had been struggling more and more with memory, concentration, cognition, and feelings of detachment. He knew what he was supposed to be doing and feeling, but he was numb, just going through the motions, and it was affecting everything. 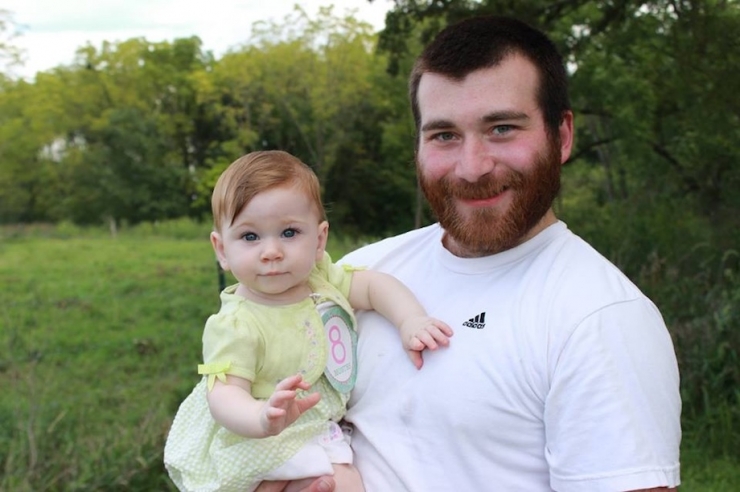 That is one cute baby.

If you ask Chris, he’ll tell you the months after Isabelle was born are a blur; he would lose track of where he was driving, had flashbacks on the job site, and electrocuted himself twice in one week. He wanted to provide for his family, he was still that bright-eyed optimist, but his brain would just not cooperate. 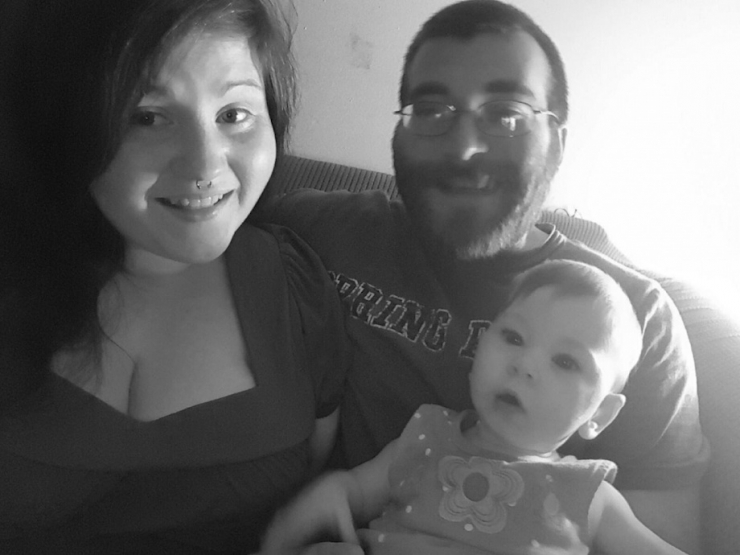 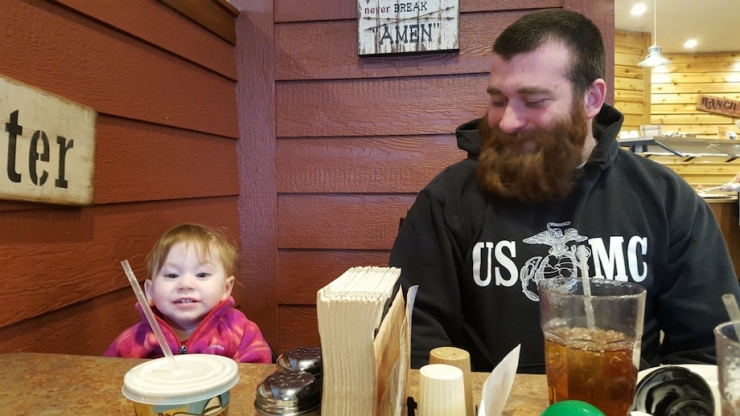 Alexa’s grandma pushed Chris to get help from the Veterans Administration. In my head, I’m picturing this awesome little Chicago lady making pizza dough and shaking her rolling pin while telling Chris to call the V.A. I doubt it was like that at all, but whatever she did, it worked. Chris started the long process of getting well. Somewhere along the line, he learned about PTSD service dogs.

Service dogs take “best friend” to a whole new level. They help relieve the stress veterans with PTSD experience by protecting their personal space and soothing their anxiety. The unconditional love is pretty great, too.

After much research, Chris found Medical Mutts in Indianapolis and they’re an organization after our own hearts. They train rescue dogs (underdogs perhaps?) to help humans living with lots of different challenges, including PTSD. They match a mutt with a person in need, train them both for six to nine months, and send them on their way to the happy, healthy lives they both deserve. The program costs $14,000, and of course Chive Charities stepped up to the plate. 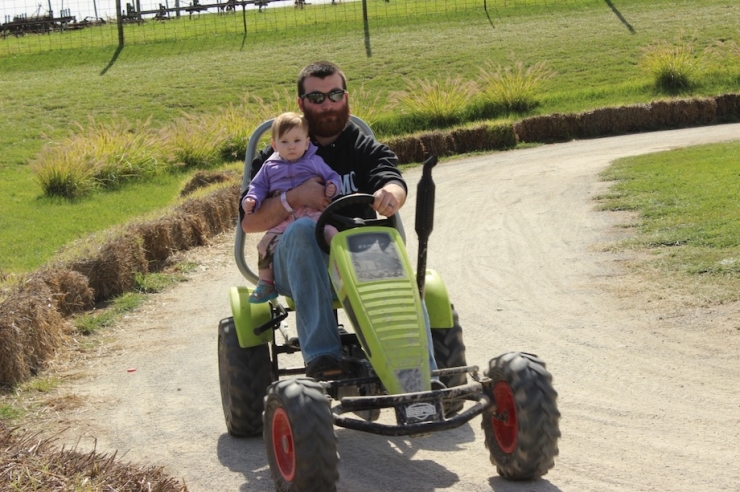 “I’m ready to be outside a lot more and not worry about the triggers,” Chris said. He told us over and over what a saint his wife Alexa is, who tries mightily to keep his stress level down and ease his symptoms. Oh, did I mention Alexa is pregnant? With twins? They’re due this summer. 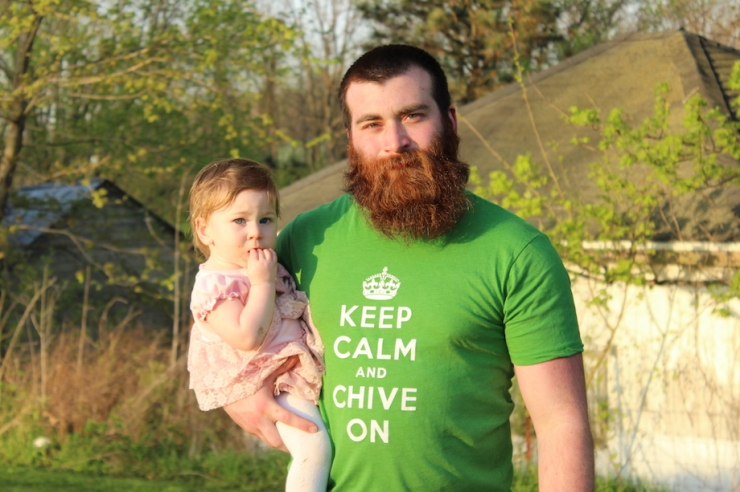 This is the perfect time for Chris to find his zen and become the super dad he wants to be. 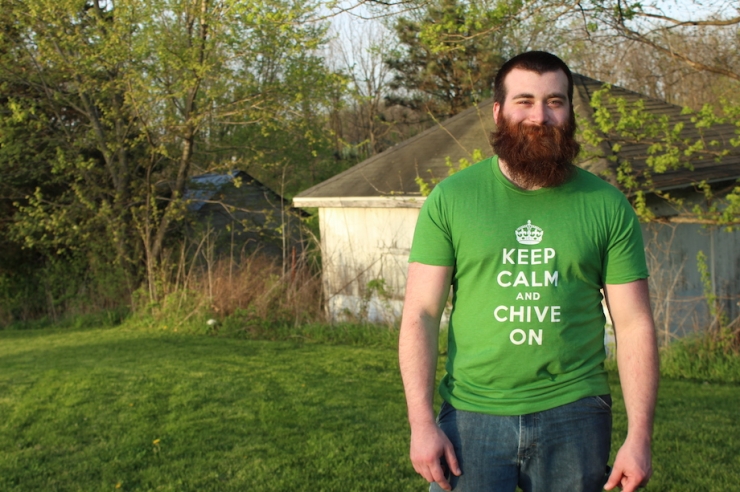 Something very cool happened on the call with Chris. We talked about his experiences and clarified a few things; it wasn’t a long conversation. But the minute we asked him if he was cool sharing this story with all of you, he spoke up loud and clear.

Chive Charities is providing grants to veterans throughout May. It’s Military Appreciation Month, and even though we’re grateful every day, it’s nice to shout it out especially loud this time of year.

We couldn’t help Chris break through to his happiness – and change the view on mental health – without the generous monthly donors to our Green Ribbon Fund. We can help even more warriors like him if you join the movement, too. Click HERE to find out more. 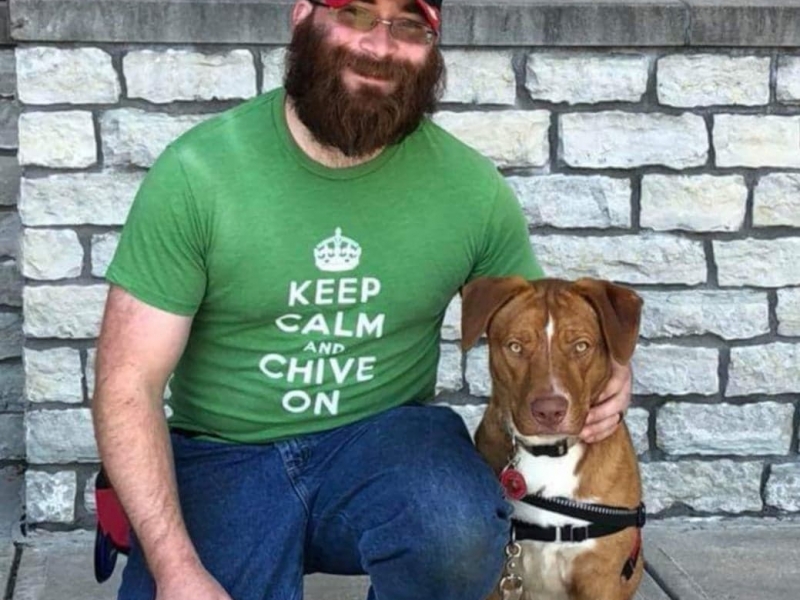 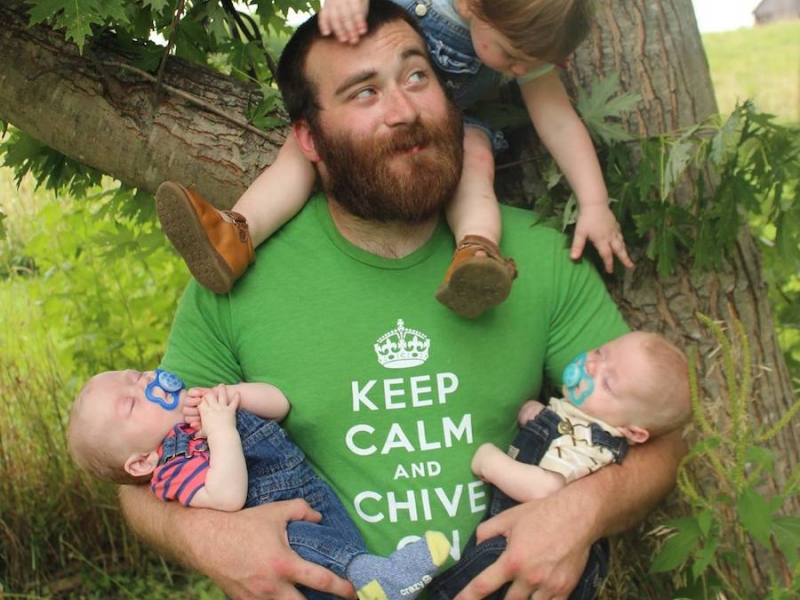 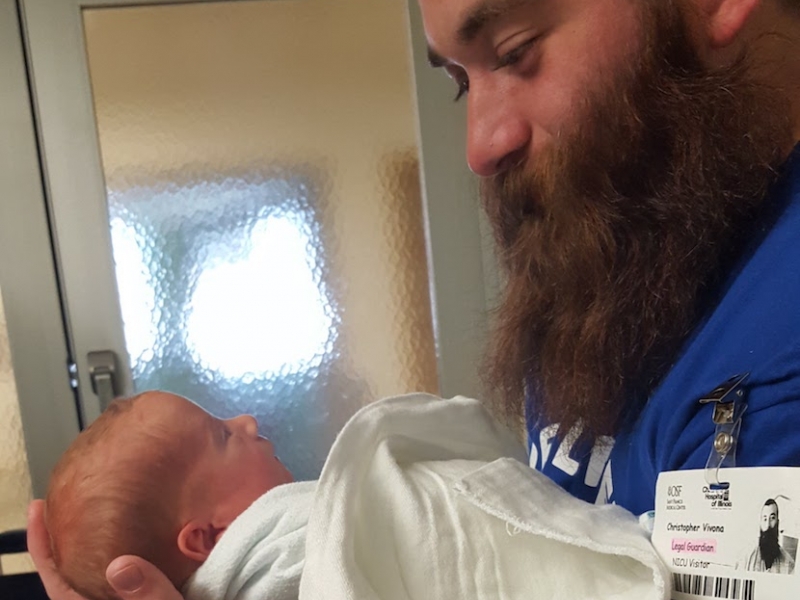